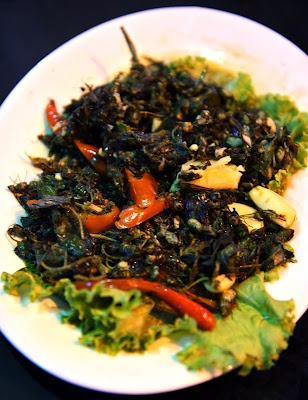 Undeterred by yesterday's frog fiasco (see 3.269 Fried Frog in Khmer Spices), perhaps even emboldened by it, I ordered ants for dinner.  If not amphibia, then maybe insecta.  Well, based on this experience, not insecta either.  It was the most unpalatable food that I've ever tried to eat.  In high school, while I was running in the hills behind campus during gym class, a huge bug flew into my mouth, and I bit down on it in surprise, and it tasted and felt on the tongue like battery acid.  This was like that, only worse, because the spices seemed to amplify the sensation.  I'd ordered the dish on a whim, never having heard of it, seeing it on the menu described as "unique of Cambodia," assuming that the ants would break up into unidentifiable pieces during the cooking process and pop like little seeds in the mouth, but without much flavor, more about texture than taste, which is what eating crickets is supposedly like.  But these weren't picnic variety ants--they were huge, more like bees, around 1 centimeter in length, fully intact, complete with wings and legs and antennae.  In an extreme exercise of willpower, I placed a tiny spoonful in my mouth and took a single chew.  I could sense the abdomens bursting open, followed immediately by a rush of bitterly rancid juice, making the gag reflex kick in.  With all due respect to those who are into this kind of thing, I had to spit it out.  I would later be informed that ants are considered so intense even by local standards that they're rarely eaten on their own and typically paired with some other main ingredient; in fact, I'd pointed to "Fried Beef with Red Ants" on the menu, but the plate brought to me contained just the ants, but I couldn't that imagine anything on this earth could make a difference for the better, so I didn't request a redo.  Another culinary adventure gone wrong. 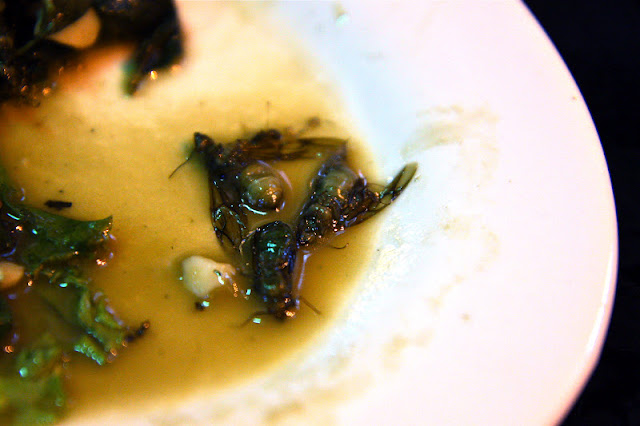 I would also learn later that red ants are one of those items that the more daring tourists in Cambodia use to test their gastronomic/gastrointestinal mettle.  CNNgo discussed the dish in the Cambodian installment of their "10 [country] dishes you've got to try" series (see CNNgo's article "10 Cambodian dishes you've got to try").  Coincidentally, the piece recommends trying the dish at the restaurant Romdeng, which had been my original destination this evening, but I got there to discover that it was closed on Sundays.  Wandering around the neighborhood, I came across an open air food/bar court at Sorya Golden Mall and randomly sat down at one of the stalls, which happened to serve ants.  Apparently, I was fated for ants this evening.


And so, red ants were the 1000th meal of the blog.  (I'd previously identified a prior post as being the 1000th, but it turns out that my numbering had been off.)  I'd like to do a breakdown of all the meals thus far at this milestone, but I'll save the retrospective for later, with so much to discuss about today. 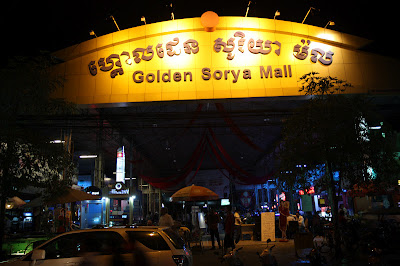 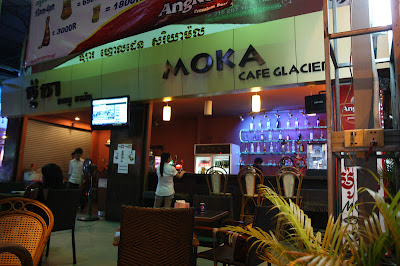 Now hungrier than ever, I continued my exploration of the neighborhood and discovered one of the quirkiest restaurant concepts that I've ever encountered: Chuck Norris Dim Sum.  When I asked the girl behind the counter, pointing to Chuck's drawn picture on the wall, "Owner?," she shook her head and replied, "No boss."  Ownership aside, I don't think that Mr. Norris would appreciate not being the boss of anything.  In writing this momentous post, I was very sorely tempted to go with a Chuck Norris dumpling as the featured dish, but the red ants won out for being more interesting as a food item per se. 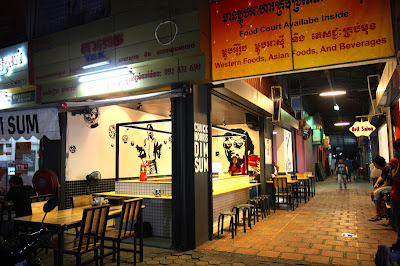 Part of the same mall, different side of the complex. 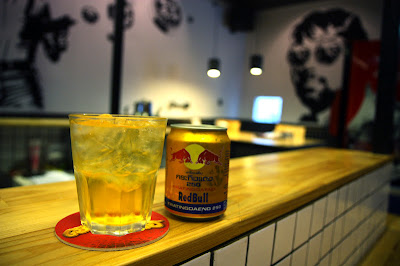 Talk about a "Rock Star!" 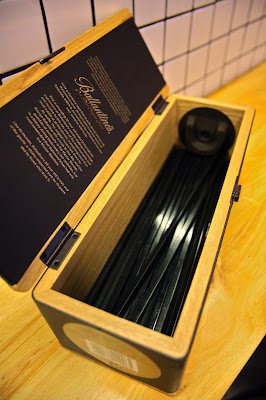 Most appropriately, the chopsticks came in box for Ballantine's 30-year-old Scotch. 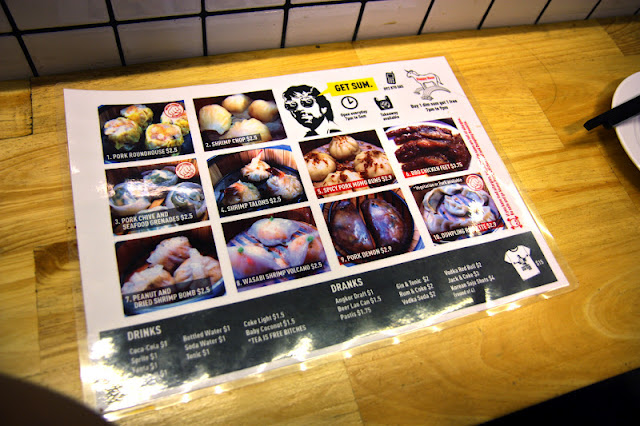 Not dim sum for the namby-pamby, the menu offered items like "Pork Roundhouse"--what wusses might refer to as "shao mai" elsewhere. 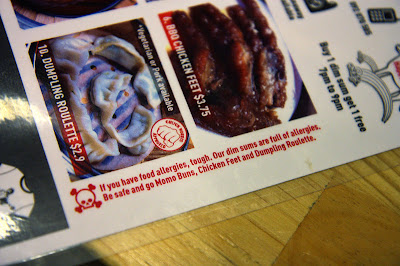 "Our dim sums are full of allergies." 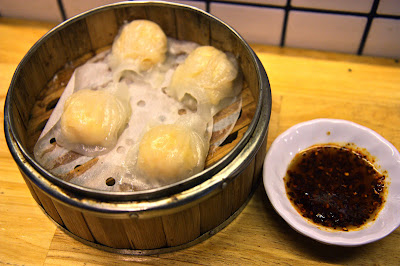 Looking for a place to eat lunch earlier in the day, we passed by a Korean restaurant.  Based on the spelling of "laeng myeon (랭면)" on the front signage--not "naeng myeon (냉면)" as it would be in South Korea--Pyong Yang Laeng Myun Gwan Restaurant appeared to be North Korean, officially owned/operated by the DPRK, which the government does with other restaurants in various communist countries around the world.  If only for the novelty of being served by robotic North Korean waitresses with funny accents and permanent smiles--in direct conflict with my prime directive of never eating Korean food when overseas--I acquiesced. 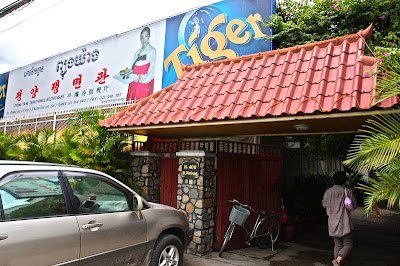 While the establishment was indeed North Korean in management, the food was not northern in character or in variety.  For example, the mandu guk came in a spicy broth (see below), a point that I discussed in a prior post on the differences between northern and southern styles (see 2.201 Mandu Guk).  The restaurant's eponymous laeng myeon featured thin, rubbery, black noodles in a sweet broth topped with kimchi, all indicative of the south traditions (see generally 1.188 Mul Naeng Myeon).  And the menu offered snack staples originating in the South, like ddeokbokki and kimbap, as well as fusion dishes popular in the South, like curry rice and jjajang myeon.

Granted, my understanding of northern food derives from experiences at purported northern-style restaurants in present-day South Korea, where the recipes are frozen in time, brought over by former North Koreans before the peninsula was divided 60 years ago.  Since then, I'm sure that the food up north has changed somewhat, as all cuisines do over time.  But because deeply entrenched culinary traditions tend to move in new directions most dramatically when external influences are brought to bear, the north's cultural isolation renders any major changes to the food unlikely.

In any case, the menu and the modes of preparation at Pyong Yang Restaurant didn't represent some kind of evolution as they did outright appropriation of existing southern standards, in deference both to international customers, who are now accustomed to the southern style, and to South Korean customers, who seemed to constitute the vast majority of the clientele during our visit. 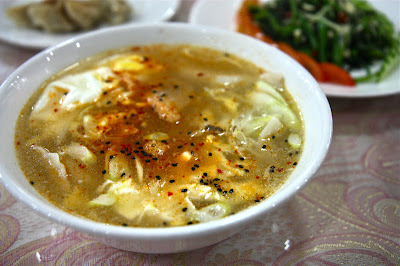 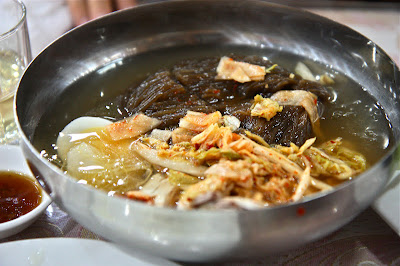 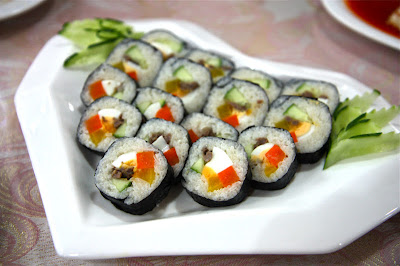 Overall, the prices were exorbitantly high, making Pyong Yang Restaurant one of the most expensive dining facilities in the entire city.  Some of the dishes on the menu cost in excess of $30, most between $5-$15, even the kimchi cost $3, compared to a typical rice plate at a local eatery for about $2.  In light of the disappointing food, both in terms of authenticity and quality, I thought that the experience wasn't anywhere near worth the money paid for it. 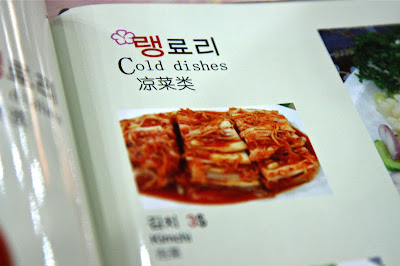 I'd taken this photo to show the spelling of "laeng ryori" (랭료리) instead of "naeng yori" (냉요리), but it also (blurredly) shows the $3 charge for kimchi, which is like a burger joint charging for lettuce/onion/pickle/tomato. 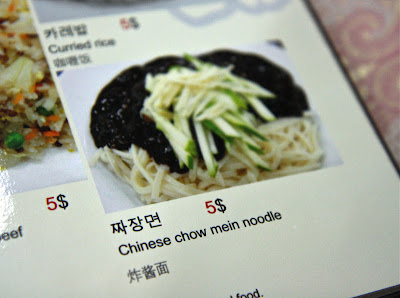 Didn't bother to try it, but it very probably wouldn't have been worth $5. The only authentically North Korean dish on the menu was this stew of dog,
an animal whose meat is considered so delectable that it's referred to as "dan gogi (sweet meat)."

Despite what this post would suggest, the taking of photos in the restaurant was strictly forbidden, probably for the purpose of preventing something like this post.  On a visit to Beijing several years ago, I'd eaten dinner at a similar DPRK restaurant, where the menu had opened to dazzling photos of ostentatiously lavish feasts, with items like lobster and rack of lamb, all described as "traditional North Korean cuisine;" upon inquiry, just being curious, we were told oh so regrettably that the ingredients had just sold out due to immense demand and politely instructed to order from the back sections of the menu.  Amused, I took out my camera to photograph those front pages only to be thwarted before I could even turn it on.  This time, seated in the corner, I'd managed to fire off several shots surreptitiously before a waitress saw what I was up to, bolted over from across the hall in a fury, and demanded that I stop.  For the rest of the meal, she maintained a constant line of sight and patrolled within a hop-skip-jump of our table--in the spy trade, that's called "counterintelligence."

To be honest, this latter part of the post had originally been much different in tone and content.  For starters, I'd included many photos from the morning's visit to Tuol Sleng Genocide Museum and Choeung Ek Genocide Center ("The Killing Fields), along with descriptions of what the Khmer Rouge had done to their own people in Cambodia.  From there, the discussion ran to parallel criticisms of certain other regimes.  After numerous revisions over several hours, I felt that it was among the best writing that I've ever done, both in terms of content and craft.  I published it but then retracted it a few minutes later.  Ultimately, I didn't want this to get too political. 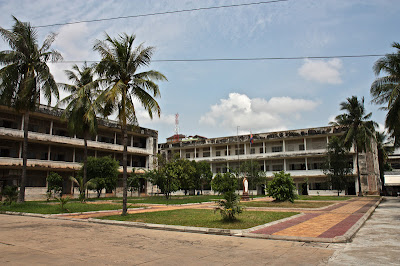 The main grounds of Tuol Sleng Genocide Museum, where 17,000 people were imprisoned and tortured and killed or sent off to be killed. 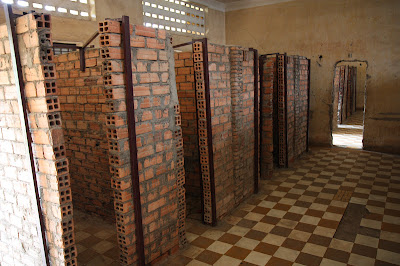 Prison cells in a former classroom. 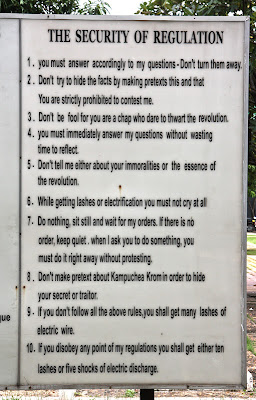 As stated in prison documents, the rules of interrogation. 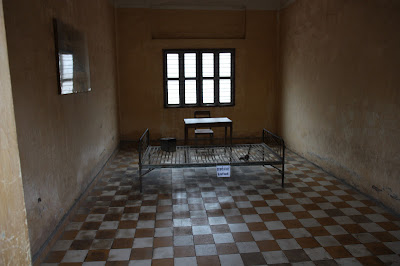 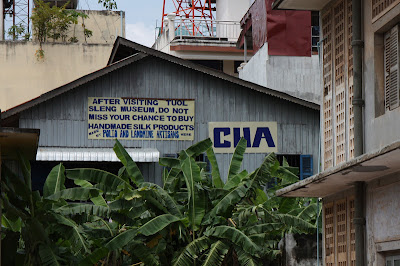 Cashing in on the memories of those killed in the genocide (the building to the right is part of Tuol Sleng), while exploiting the living victims of both polio and land mines. 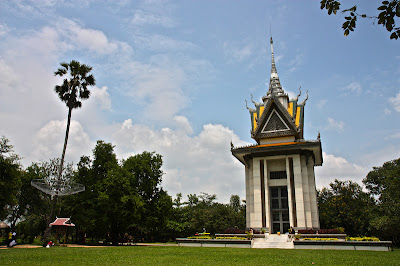 The stupa memorial at Choeung Ek Genocide Center, the site of the largest known "killing field." 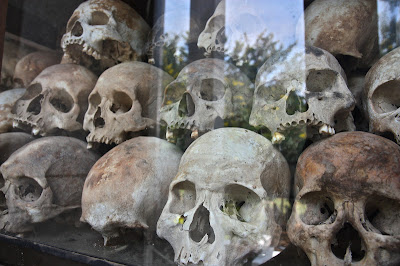 Within the memorial, 5,000 skulls on display.