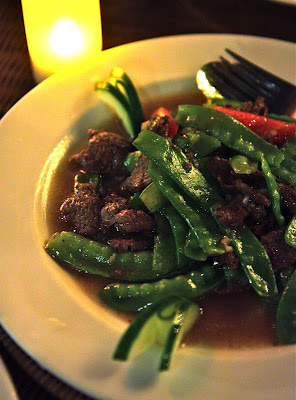 In keeping with this trip's initially-unintended-yet-gleefully-embraced-though-ultimately-regretted theme of novel/novelty eats (see most recently 3.268 Fried Beef with Red Ants), I ordered water buffalo for my final dinner in Cambodia.  I'd tried buffalo once in the States, presumably land buffalo, and remembered it to be like beef but a bit gamy in aftertaste.  It occurred to me that Cambodian water buffalos, which probably drink from the same marshes where Cambodian frogs eat and dump and hump and hatch, may be a bit froggy in aftertaste (see generally 3.267 Fried Frog in Khmer Spices).  Fortunately, it wasn't froggy in the slightest, just slightly gamy as expected, while the soy-garlic sauce and snows peas were fine, if predictably so.  I was almost disappointed that the dish failed to deliver some sort of ick. 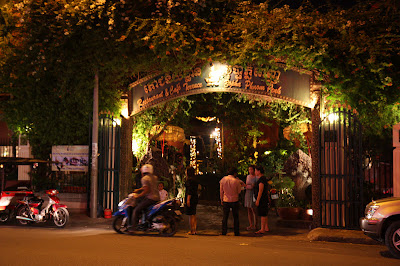 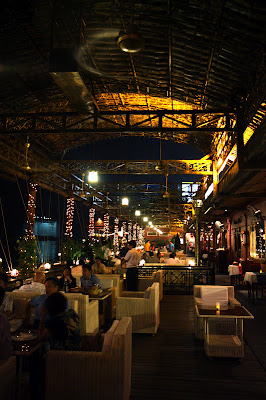 The venue was Bopha Phnom Penh - Titanic Restaurant (see restaurant's website).  Located along the Tonle Sap River in the expat/tourist district of Sisowath Quay (Riverside), it's one of the city's most famous restaurants, at least among expats/tourists, a must-eat destination for first-timers in Phnom Penh.  The menu was divided about evenly between traditional Khmer cuisine and common Western fare (e.g., steak, pasta).  Overall, the food was competent but less than spectacular--a flat 4-star rating across the board.  Prices ranging from US$6-10 per dish, it's on the upscale side, especially where local food is concerned.   The service was excellent, English well-spoken by our waitstaff.   I suppose the idea of a river view would be attractive for many customers; however, because Phnom Penh is still largely undeveloped, particularly the areas on the opposing bank, looking out across the river at night reveals little beyond pitch black darkness.  Presumably, the view is much better during the day. 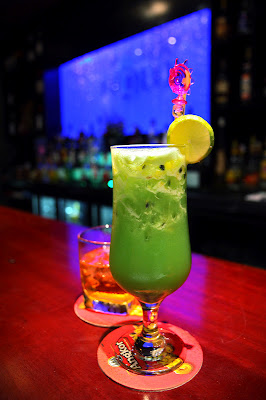 The best meal of the trip thus far was lunch earlier in the day at the restaurant/guesthouse Khmer Surin (see website).  Judging by the contrived tropical decor, apparently designed to reflect what a corny foreigner might fantasize Cambodia to look like, it was clearly a tourist trap, but one that delivered on the bait.  All the dishes that we'd ordered were balanced in flavor, constructed with care, and beautifully plated--exactly how a corny foreigner like me might idealize fine Cambodian cuisine.  Our local contact, who'd taken us to Sky High Bar & Restaurant a few nights earlier, said that he'd considered Khmer Surin but decided against it when I demanded nothing touristy.  Silly me.  (I'd been afraid of something corny without the substance, more along the lines of Titanic above).  My first meal in Cambodia two nights prior could've scored a solid 5 stars had I trusted his instincts, but then I wouldn't have experienced that exquisitely repulsive frog (see post on frog above).  If ever I'm in Phnom Penh again, I'll definitely considering staying at Khmer Surin, just to have easy access to the food. 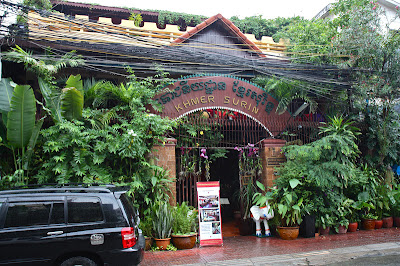 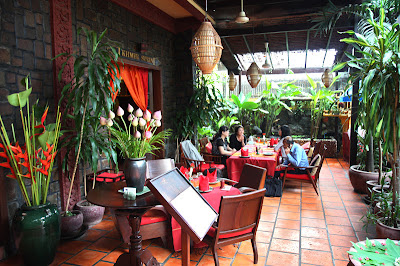 Nowhere else in Phnom Penh exhibits this much vegetation. 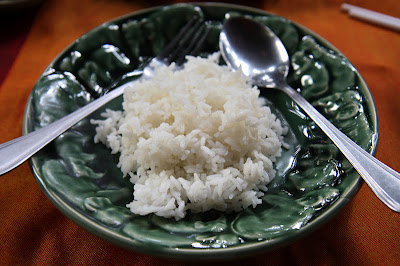 Be prepared to see this plate again in a future post. 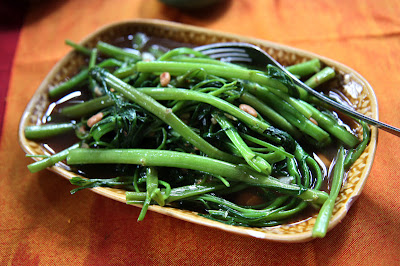 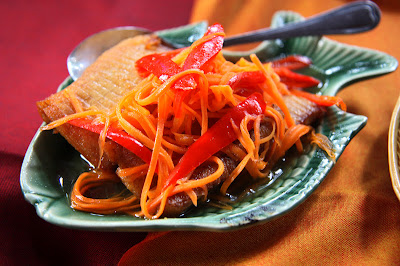 Fried Fish in Garlic Sauce--absolute perfection, the best dish of the best meal (4.0). 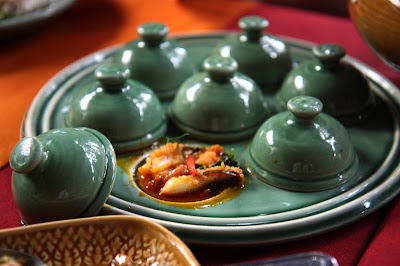 Our Cambodian companion seemed a tad bemused by the restaurant's nouveau take on amok, which is traditionally done with chunks of whitefish, not bits of random shellfish, and is traditionally presented as a whole in a banana leaf wrap or carved out coconut for everyone to share (see frog post above), not in individual servings (4.0).

This time, we stayed at the Royal Mekong Boutique Hotel (see website).  The hotels in Phnom Penh are amazingly affordable, US$50 being the sweet spot for a standard single room per night, this place just US$24.  With a single dollar going a long way here, that lower price point constituted significant savings, which could be applied towards more important things, like food and booze.  And due to a fortuitous booking error, the hotel upgraded me to a junior suite, so I really got my money's worth.  Money aside, I really enjoyed my stay. 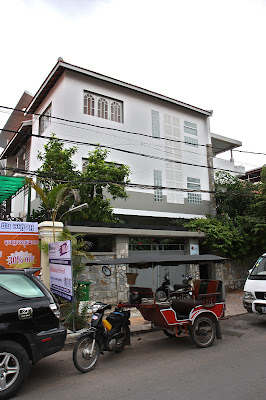 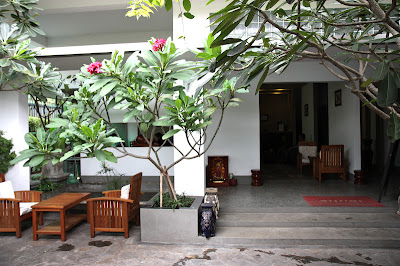 The not-so-ostentatious facade and entrance. 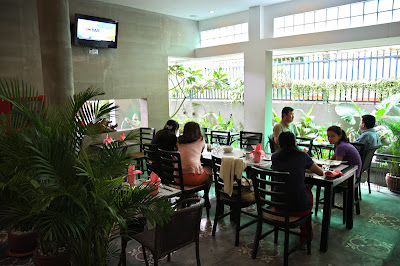 The small if sufficient dining hall in the lobby. 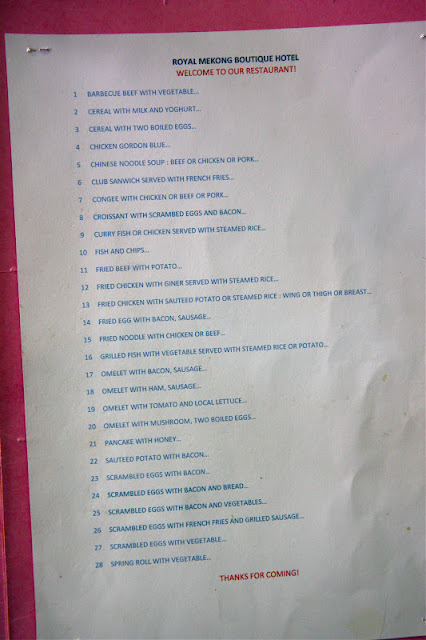 Unlike other hotels offering complimentary breakfast buffets, this place had a made-to-order menu consisting of local and international morning dishes; even though it did require a few minutes for the food to arrive, I could appreciate the simultaneous recognition of personal choice and reduction in waste. 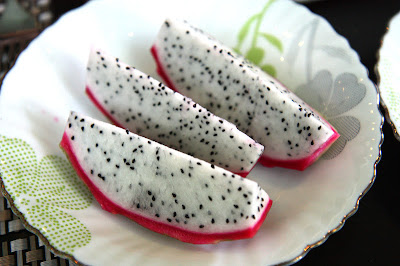 Fresh fruit, like this dragonfruit, were available buffet style. 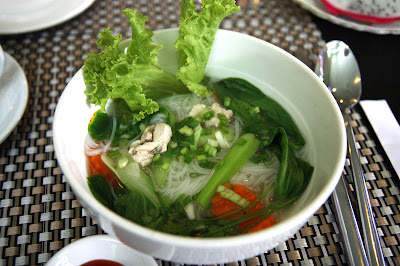 Given my preference for broth in the morning, preferably with noodles, especially after a night of drinking, I ordered nothing but the #5 during my stay (Chinese Noodle Soup) (with chicken) (more like Vietnamese pho) (2.0), leaving me with a lot of leftover instant cup ramyeon that I'd packed. 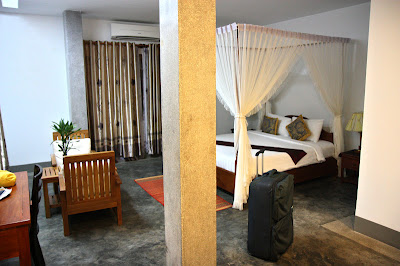 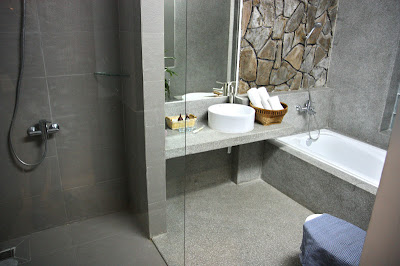 In my experience, "boutique hotel" seems to mean that the building itself is tiny but, within each room, the floors are stone/hardwood, the walls are gray/beige/white, and the towels are rolled up and provided in a rattan basket. 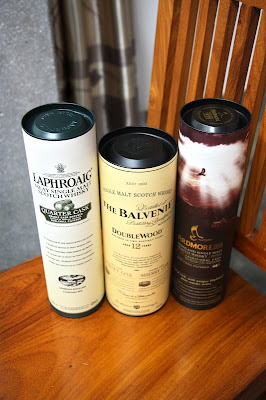 As always, the primary objective.