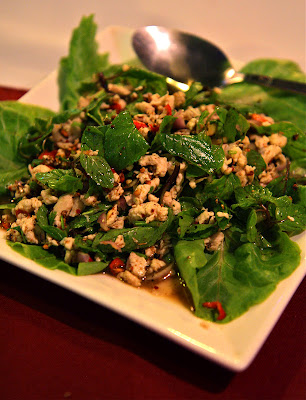 Having concluded our work in Cambodia (see previously 3.269 Fried Water Buffalo with Snow Peas), we flew to Laos for more of the same.  Sadly, the visit will be short, this evening (free time) through tomorrow afternoon (mostly work).

Time enough only for one dinner while here, and left to my own devices, I tried to make the occasion count.  My research on the local cuisine--the opening paragraph of the food section in a travel guide that I flipped through at the airport bookstore a couple hours prior to arrival--indicated that I should go with larb, reputedly the Lao national dish.  Basically, it turned out to be a salad consisting of minced chicken--I'd gone with chicken ("gai"), but beef, pork, and fish versions had also been available--mixed with chilies and and spices and herbs, tossed in a tart soy-based dressing.  I might've enjoyed the dish had it not been for the overwhelming heat from the chilies, which I don't like, and the overpowering licorice flavor from the spices/herbs (anise seeds?), which I can't stand.  Subsequent research would suggest that this style of larb may actually have been northern Thai rather than Lao in origin  (see Wikipedia's entry on larb).  In fact, from my table at the rooftop restaurant of my hotel, situated on the Lao side of the Mekong Rice, I could see Thailand directly across the water.  I tried. 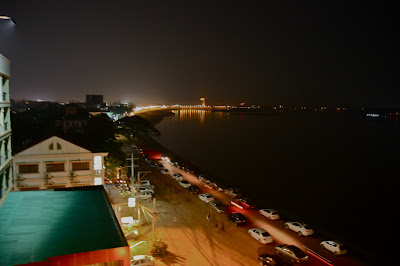 In the distance along the Mekong River, the lights of Vientiane's expat/tourist district beckoned, but I was too tired/chicken to venture out on my own. 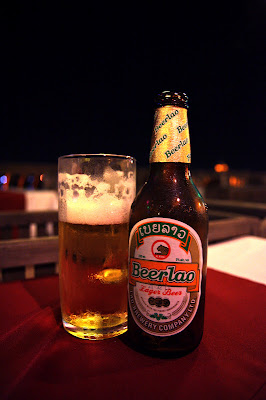 The national beer is Beerlao, a light yet hoppy lager, similar to Cambodia's Angkor and Thailand's Singha, but with slightly less depth of flavor. 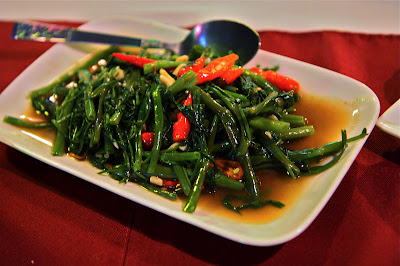 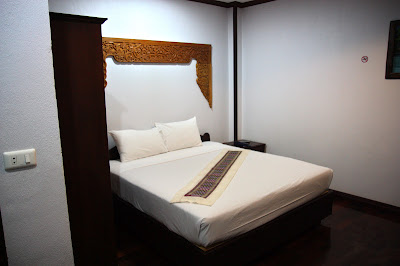 The room was smaller than the photos on expedia.com had led me to believe. 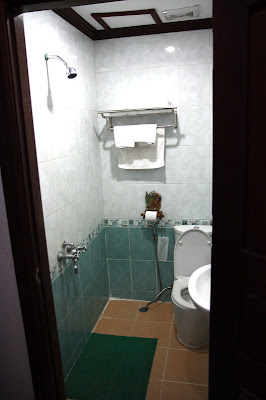 I can't recall ever staying in an actual hotel room that didn't have an actual shower stall. 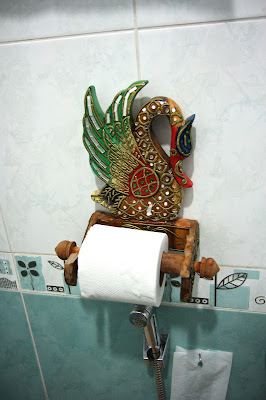 On the bright side, the toilet paper dispenser was the most elaborate that I've ever seen anywhere. 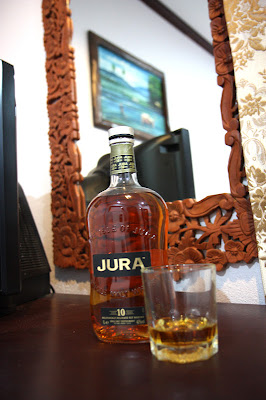 The Jura - "Superstition" 10-year, acquired from the duty free store at Phnom Penh airport
--finally, I've discovered a malt that I don't like. 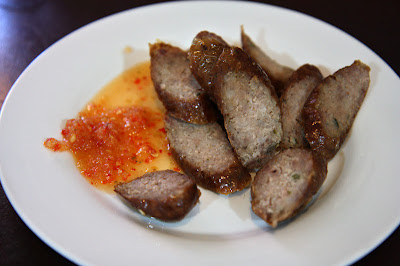 This Luang Prabang Sausage (takeout from the restaurant) made for a pretty good late-nite snack (2.5).