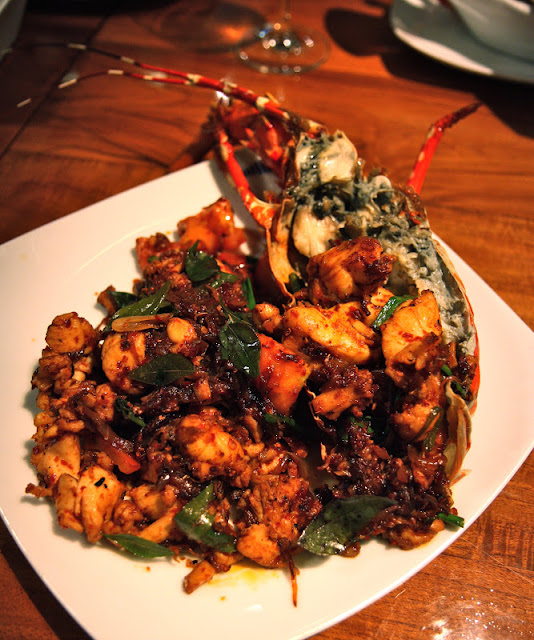 at The Lagoon (Cinnamon Grand Hotel)

with various members of Yonsei University

The Lagoon is a seafood restaurant, mostly South Asian in character.  It's one of the most famous/popular restaurants in the city among tourists/expats, ranked #6 on tripadvisor.com (see tripadvisor.com on Colombo Restaurants), just one spot below Chutneys, where I had lunch yesterday--both are located in the Cinnamon Grand Hotel.  The main draw at The Lagoon is the fresh seafood, which customers can select along with a method of preparation.  Most items are priced according to weight.  The menu also offers standardized dishes. 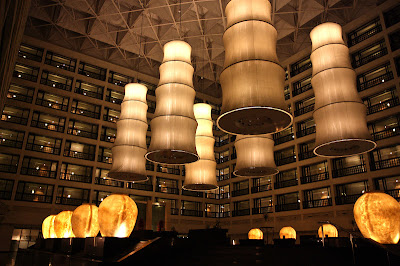 The inner lobby of the Cinnamon Grand Hotel. 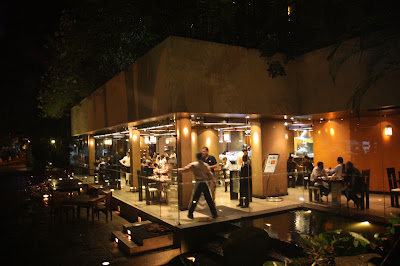 For our final dinner in Colombo, we went all out.  The 6-star rating was more about the overall meal, one of the best that I've had in recent memory.  While the lobster was amazing--the savory curry spices pairing exquisitely with the sweetness of the succulent meat--a solid 3.5, it probably wouldn't have merited a 4.0 on its own.  And the other dishes were also excellent across the board though not extraordinary.  But overall, everything made for quite the fine feast.  The final bill for the four of us, including drinks, plus tax and service charge, came out to 40,602 rupees (about US$315)--the lobster alone was 12,668 rupees--an extravagance by any standard.  We had a great time. 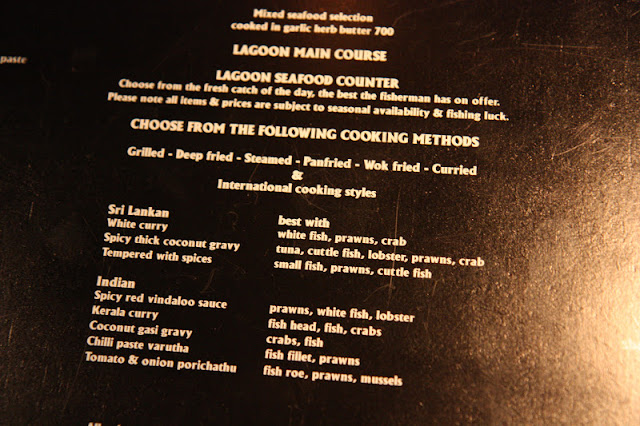 The menu also offered other preparation methods, such as Chinese or Continental. 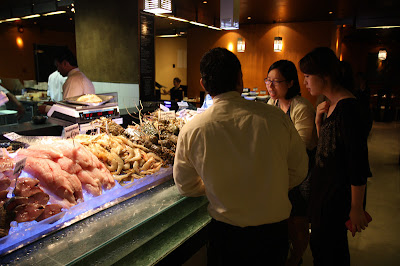 Getting recommendations from our server. 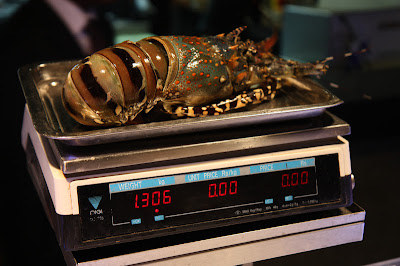 Without claws, that 1.3 kg is mostly tail. 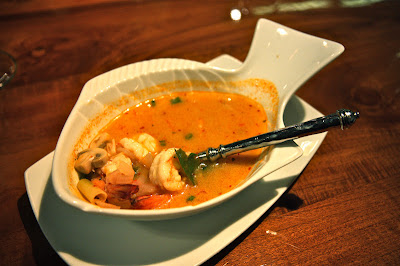 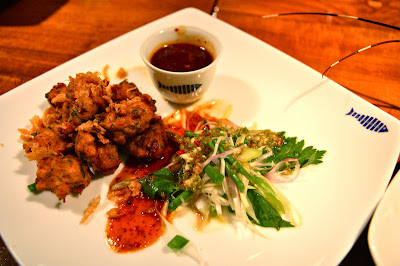 some kind of crab-fish fritters (3.0) 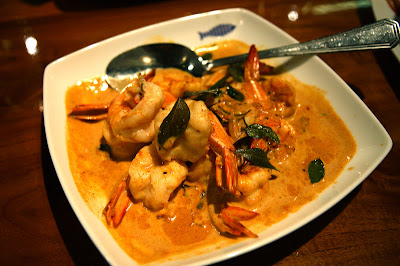 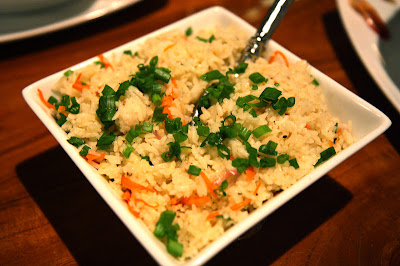 During my brief stay, admittedly through limited exposure, I observed 3 things about Sri Lankan cuisine.  First, it appeared to share a lot in common with Indian, similar spices, similar methods of preparation, similar eating practices.  Certain specific dishes aside--e.g., lamprais--my untrained palate couldn't really tell that much of a fundamental difference.  It reminded me of the Thai-Cambodian dynamic that I discovered during my recent visit to Phnom Penh (see 3.267 Fried Frog in Khmer Spices).  Interestingly, at least in the tiny corner of Colombo where I roamed, Indian restaurants looked to enjoy higher status than their Sri Lankan counterparts.  Second, one aspect of Sri Lankan food that was immediately and consistently noticeable was how hot it was, much hotter than anything that I've experienced with Indian food, including the Indian food in Sri Lanka.  The supermarkets that I visited did have large supplies of chili powder.  Even the ketchup dipping sauce accompanying the finger foods at the APACPH conference coffee breaks was laced with heat.  And third, whereas the spices in Indian sauces tend to be fully ground and blended smoothly together, the Sri Lankan style seemed to prefer keeping the spices intact--whole cardamom pods, whole curry leaves, whole peppercorns, whole coriander seeds, each popping or crunching at every bite.  Not really my thing, but I suppose that it could be pleasant for those who can appreciate the full effect of such spices.

I enjoyed the food, but I don't think that I'm ready to eat it at every meal every day. 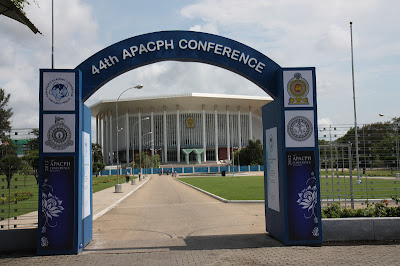 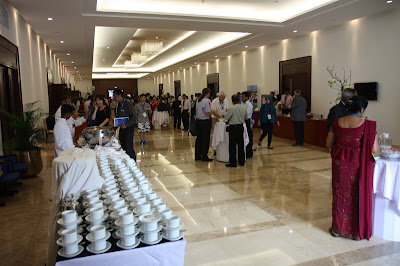 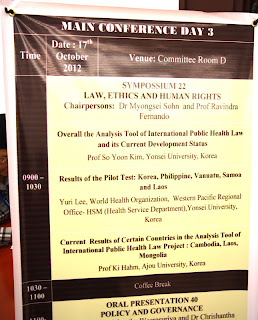 And yes, I did do something beyond stuffing my face while I was here. 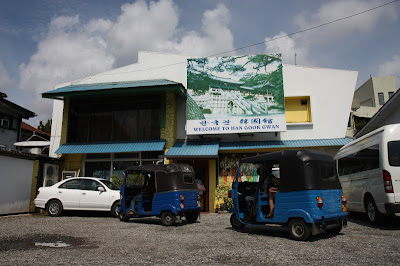 For lunch, we went to the local Korean restaurant Han Gook Gwan, much to my disgust.  As I mentioned in the post concerning my visit to Laos (see 3.271 Pho Ga), the Prime Directive prevents me in general from eating Korean food while overseas, but I can't fathom why anyone would want to eat Korean food just 12 hours prior to flying back to Korea.  So, I didn't order anything.  I did taste some of the food out of curiosity.  The kimchi was a travesty.  The mandu had gone bad, which didn't stop the others from finishing it anyway.  At that point, my disgust turned physical and I left.

Incidentally, I never got around to eating lunch, which meant that I was starving by dinnertime, which may explain in part why I was so overwhelmed by my experience at The Lagoon. 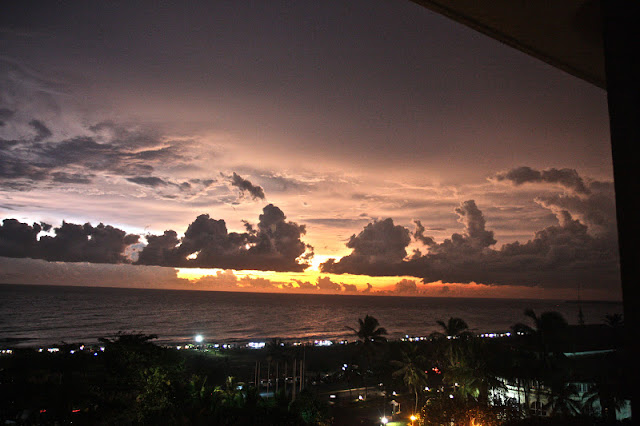 Sunset in Sri Lanka along the Indian Ocean, as seen from my hotel room at the Taj Samudra.