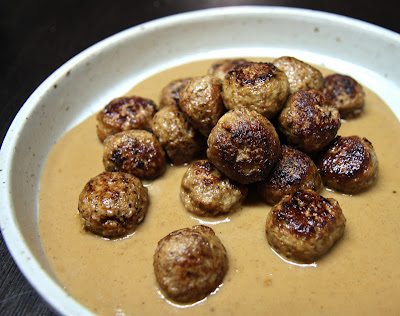 
About a month ago, I began a dialogue with reader Gustaf from Sweden that eventually led to this evening's meal.

Under the post featuring a meal of Spam/egg/kimchi with rice, he commented: "OMG that sounds so awful... But I might give that meal a try just for the heck of it.. If I can get my hands on some spam that is..." (see 1.101 Spam & Fried Egg & Kimchi (& Tofu) with Steamed Rice).  Being in Sweden, Spam wasn't the only problem; kimchi would also be very difficult to come by.  He found the Spam.  He made the kimchi.  That's right, he made kimchi.  He found a recipe online and somehow managed to acquire the ingredients or whatever was suitably close and did it.  Which is ironic because the meal is supposed to be one of quick convenience, and amazing because the vast majority of Koreans themselves don't even make their own kimchi these days.  Gustaf's mission report: "Hey man!  I just tried 'making' this dish myself!  You were right, the combination of salty spam, the fried egg, the (homemade) kimchi, and finally the rice was pretty awesome!"  Apparently, this blog has grown so powerful that it now dictates the dietary habits of Scandinavia.  He sent me photos. 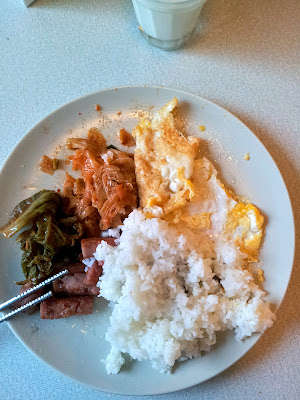 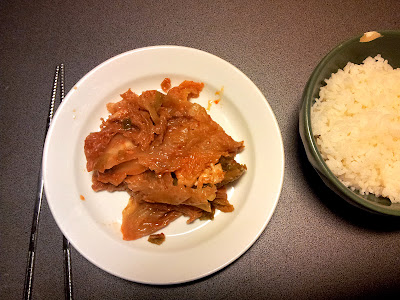 In the spirit of cultural exchange, I offered to make something Swedish in return.  As an American, Swedish meatballs came to mind, popular as they are in the United States, particularly in the Northern Midwest (think Fargo), where early immigrants from Sweden had settled.  He sent me a recipe.  I did some online research and found loads of additional recipes, albeit from American sources.  With the hubris of an international power blogger, I combined elements from the various recipes to synthesize my own.  The resulting dish turned out far beyond expectations.  So simple yet richly satisfying, succulent melt-in-the-mouth meatballs, savory buttery sauce.  An instant classic.  I'm very tempted to give it 4.0, but I'll hold off until I can repeat the feat for objective confirmation, perhaps adding potatoes or egg noodles to make it more of a complete meal, as well as lingonberry jam.  I'll share the recipe then. 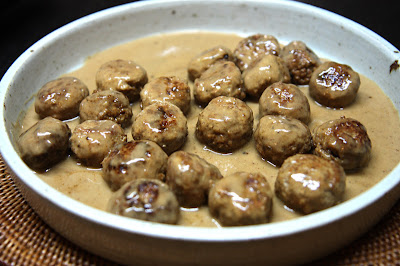 To paraphrase Chandler Bing, the Swedes probably wouldn't refer to the dish as "Swedish meatballs."  I forgot to ask Gustaf what it's called, but the internet suggests "köttbullar."  However, as the recipe formulated here may be Americanized, I'll stick with "Swedish meatballs" for now.

Thanks, Gustaf!  (We should do this again, with other dishes.)