4.327 Pan-Fried Cod with Ratatouille over Couscous 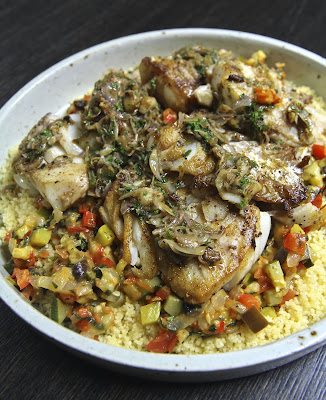 
Whole cod was on sale at the market, offering me a chance to try filleting a fish for the first time.  In Korea, that particular species is typically available in the form of either chunks for tang (see for example 1.090 Daegu Jiri Tang) or slices for jeon (see 3.200 Saengseon Jeon), never fillets for steaks.  The fishmonger couldn't believe that I wanted to take the fish as is; he asked me three times if I was sure.

Going at it cold, with nothing but vague recollections of things that I'd on food programs through the years, I made a mess but managed to extricate the flesh mostly intact.  My idea of fun. 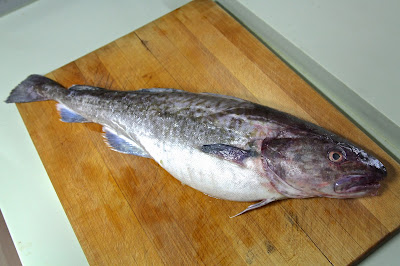 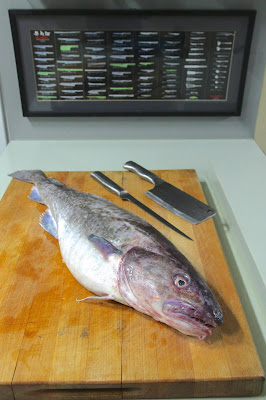 The biggest fish that I've ever handled.

Now that I've done fish and fowl (see 3.023 Pan-Fried Duck Breasts...) and frog (high school biology class), I'm ready to move on to reptilia and mammalia.  Seriously, I'd kill for a chance to butcher a cow, or at least observe a butchering up close, because I want to see for myself what the ribeye/sirloin/tenderloin/porterhouse/brisket/flank/chuck look like directly on the animal. 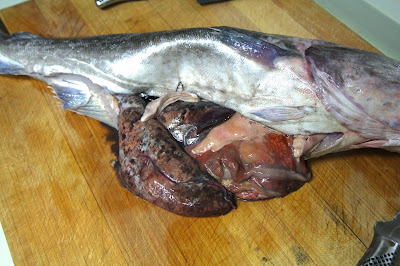 If there's a recipe for the eggs and guts, I don't want to know about it. 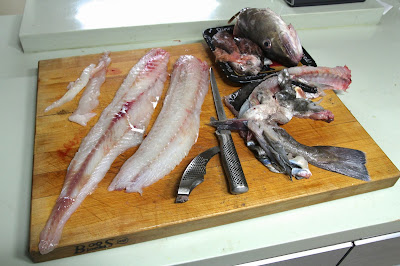 Facilitating the task, my Global fillet knife was razor sharp, having never been used since it was purchased over a decade ago.  Matching fish bone tweezers. 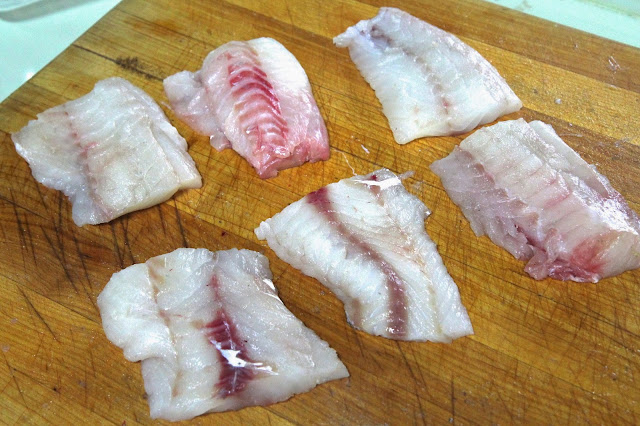 One aspect of food shopping that I miss most about America is being able to walk into a supermarket and buy fillets like this--of course, much nicer than this; I especially miss halibut, sea bass, and swordfish. 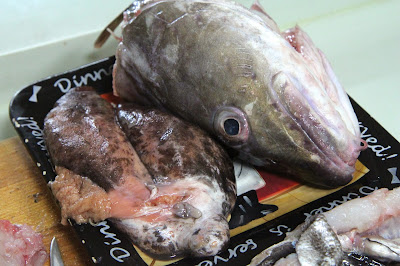 Couscous is a North African staple.  Made of semolina granules, the same type of wheat used to make pasta.  In fact, couscous and pasta are often used interchangeably in various countries around the Mediterranean region, including Italy and France.  Steamed or steeped.  Served with meat and/or veggies and/or sauce, often tomato-based.

By the way, I've decided to stop hyperlinking references to outside sources (e.g., Wikipedia) for definitions of foods and other explanatory issues.  Henceforth, the blog will be self-contained.  Whatever I write constitutes fact. 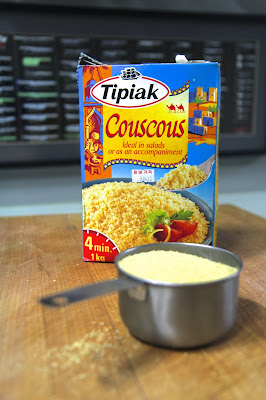 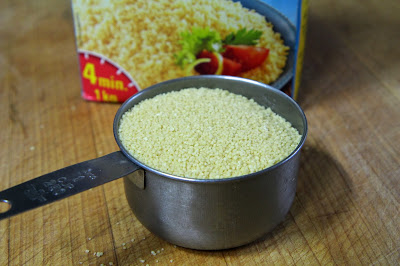 I was finally inspired to make couscous after my recent trip to Egypt (see most recently 4.307 Bean Royale), including stopovers both ways in Abu Dhabi.  3 of the 4 in-flight meals featured couscous as the base staple.  While the various accompaniments weren't that great, the couscous itself held up quite well, much better than pasta/rice/potatoes, which got me to thinking.

Ratatouille is a French vegetable dish.  From Provence, northern Mediterranean.  Typically consists of diced tomatoes, courgette, aubergine, maybe bell peppers, as well as onions, garlic, and fresh herbs.  Stewed or sautéed.  Controversy as to whether everything should be cooked together, as befitting its rustic origins, or separately, to preserve the respective textures of the individual ingredients.  In the Pixar film Ratatouille, this distinction was a crucial plot point, when the novice chef serves the jaded restaurant critic an upgraded/modernized version of the dish--actually invented by famed American chef Thomas Keller--both appealing to professional snobbery and childhood nostalgia.

Given the couscous, ratatouille seemed an easy and suitable counterpart.

All in all, a fairly respectable dish.  The cod steaks crumbled somewhat, because of poor searing technique or over-mangling during the filleting or both.  But for a family-style plating, no problem.  Pan sauce with butter and shallots, okay.  The ratatouille, from a generic on-line recipe, perfectly serviceable.  The couscous, excellent.  Even Nanny 2, who'd never in our 6-year history inquired in detail about anything that I cooked, wanted to see the box.  I should incorporate this general formula into my repertoire.