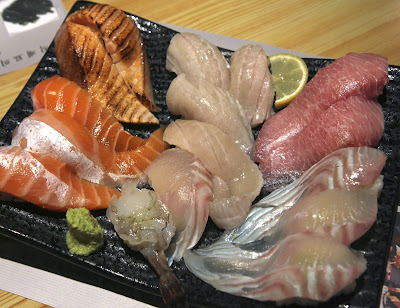 
Momotori is a Japanese restaurant. Specializes in sashimi/sushi.  The latest addition to the ever-growing Oksu dining scene.  Just a few tiny tables plus an itty bitty bar, seating capacity of maybe a dozen customers packed in.  Mid-range, prices from 15,000 to 40,000 won, such as the "special ("teuk")(특)" nigiri sushi at 23,000 won for 15 assorted pieces.

On this third attempt, I finally got a table. 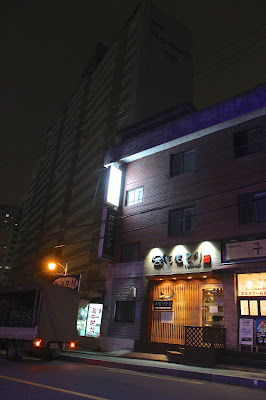 With our apartment complex looming in the background, this is the closest restaurant to home that I've eaten at. 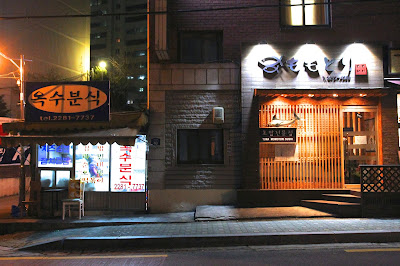 The initial plan had been to eat at the place next door, even closer to home, but unforeseen circumstances forced us to go another way. 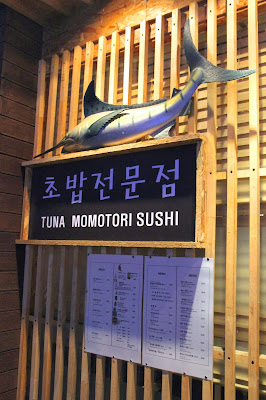 Not really a tuna joint, despite what the English on the signage would suggest; the Japanese and Korean don't mention tuna.

The nigiri sushi was largely hit, slightly amiss.  As shown in the featured photo above, the special set comprised (we seemed to have scored an extra piece) (clockwise from bottom left): 3 sake, 2 torched/broiled sake (whatever that's actually called), 4 engawa, 2 toro, 4 hirame, 1 piece ama ebi.  The pieces were cut extra thick, at least double in size--"traditional-style," the manager explained--making the platter a decent value.  However, each piece was  so big that, when taken in a single bite--the only proper way to eat nigiri sushi--it was quite literally a mouthful but not a very pleasant mouthfeel.  Particularly the hirame, which is inherently chewy and thus "traditionally" sliced thin.  And being so big, the fish totally overwhelmed the rice, negating the whole point of sushi, as opposed to sashimi.  That said, the quality of the fish was excellent: briny/sweet in taste, juicy/succulent in texture, and of course irreproachably fresh.  So, when cut into smaller pieces and eaten as sashimi, I couldn't complain.  While I liked the torched/broiled sake, Dominic absolutely loved the engawa.  We'll definitely be back for more. 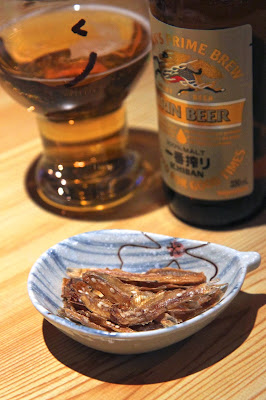 For a complimentary appetizer, deep-fried anchovy (2.0). 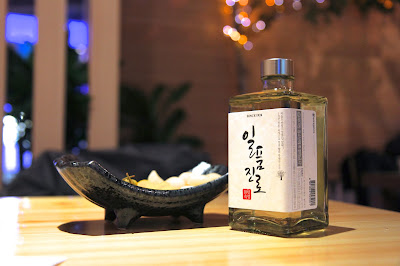 Overall, the food was great.  In addition to the nigiri, we also ordered uni sushi, which was served deconstructed without laver wraps in individual mini-bowls.  While the uni did stand out, I kinda missed the laver.  Dominic's been wanting to try uni ever since watching Monsters University, which features "stinging glow urchins."  Next, perhaps because of my camera--the chef half-jokingly said, while I was crouching to tabletop level for a good angle on the soju, that I was making him nervous--in Korea these days, restaurants are painfully conscious of the influence that internet reviews can have on business, especially from food bloggers--we were also provided with a complimentary plate of deep-fried fish in sesame sauce.  I wouldn't mind paying money for it.  Good eats all around. 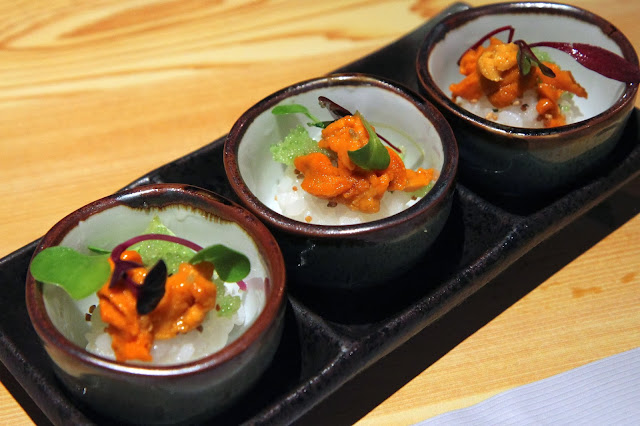 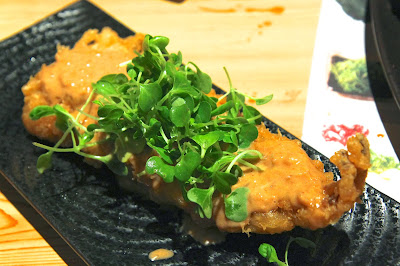 deep-fried fish in sesame sauce (3.0)
--not much fish per se, but the crispy coating was quite excellent, more English fish & chips than Japanese tempura.