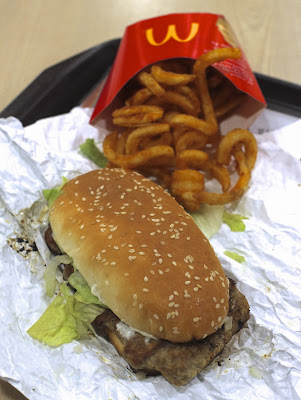 
Prosperity Burger is a sandwich from McDonald's.  Available in select markets worldwide, including Korea.  While the official Korean website describes the patty here as beef (chicken versions are available in other countries), the light brownish color, as well as the squishy texture--reminiscent of school cafeteria salisbury steak--suggest a high proportion of extender.  It's the same freakishly ridged patty--the one shaped vaguely like a slab of babyback ribs--as found in a McRib, as if leftover from that now-defunct production line, most likely the case, but I'm finding it difficult to believe that McDonald's would do something so crass.  Dark sweet BBQ-ish dressing plus mayo.   Chopped lettuce.  Grilled sesame seed bun.  4,300 for the sandwich, 5,700 for the set, which includes curly fries. 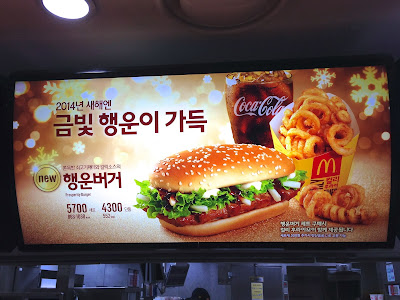 Despite the description, the Prosperity Burger isn't that gross.  Tastes okay, if artificial, as McDonald's products tend to be.  Just don't look under the bun. 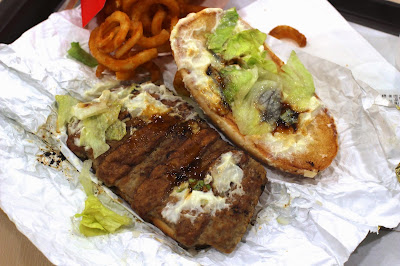 Notice the ridges, made to look like ribs, because customers appreciate the illusion of biting into bones; on many prior occasions, I've mentioned the sloppy construction of the toppings, at least at this McDonald's, but it's now completely out of control. 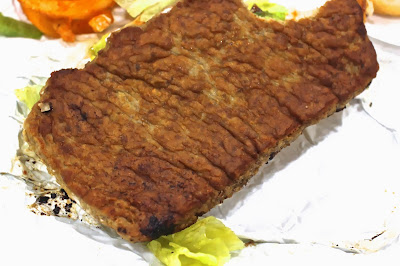 Top and bottom, the ickiest/weirdest-looking patty that I've ever seen on a burger from a major fast food chain.

Given my inability to resist McDonald's limited-time offers, though well aware that disappointment is sure to ensue (see most recently 4.322 Double Tomato Bacon Deluxe), I had to have a Prosperity Burger on New Year's Day.  Come to think of it, I'm surprised that they don't offer holiday-themed items throughout the year--e.g., Christmas Burger, Valentine's Day Burger, Chuseok Burger--for suckers like me.  If this one does well, I'd bet that they'll come back at Lunar New Year with something similar--maybe a tweaked version of the Shanghai McSpicy Burger. 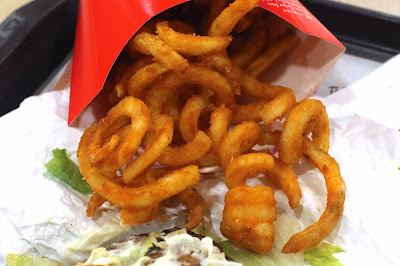 In contrast to the regular fries, the odd shape-texture of the curly fries, as well as the strong seasonings, made me think of how Pringles don't feel/taste like real potato chips.

4 meals remaining in the cycle.