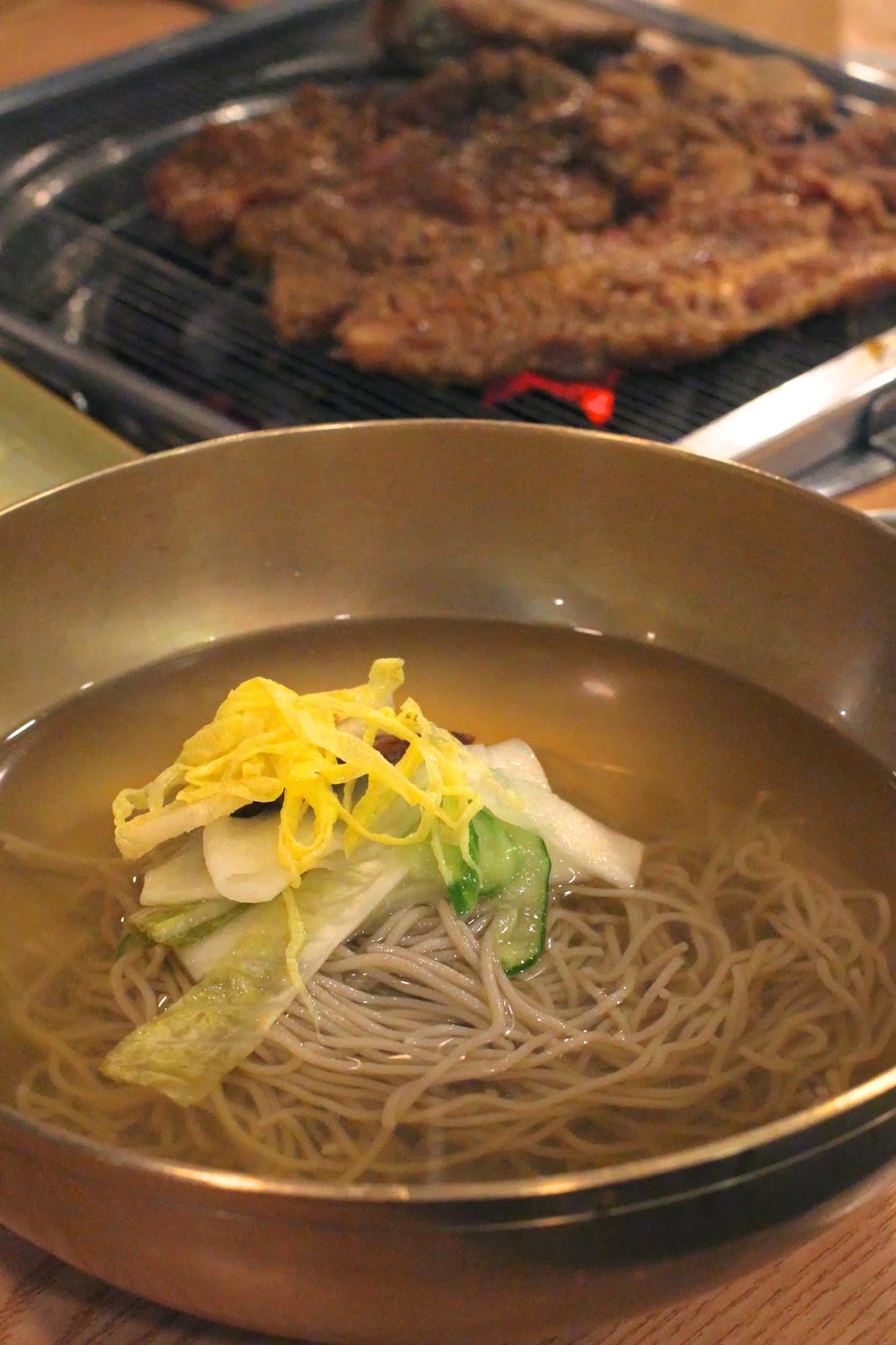 -Korean-
How I Earned a Free Bowl of Mul Naeng Myeon


Samdo Galbi is a Korean BBQ restaurant.  Maybe a chain beyond this one location, as suggested by various blogs, but can't say for sure without an official website for confirmation (I should've asked someone while I was there; my dining companions were nearly an hour late, so I had ample time to investigate).  For a BBQ joint in Korea, the menu is quite eclectic, offering both pork and beef for the grill, marinated and straight up, as well as several rice/noodle/dumpling dishes, including mul naeng myeon, specifically CS-PYS MNM (see most recently 4.319 (Mul) Naeng Myeon), as proudly proclaimed on the signage.  Can't recall any of the prices in detail, but remember thinking that they were generally mid-range, reasonable. 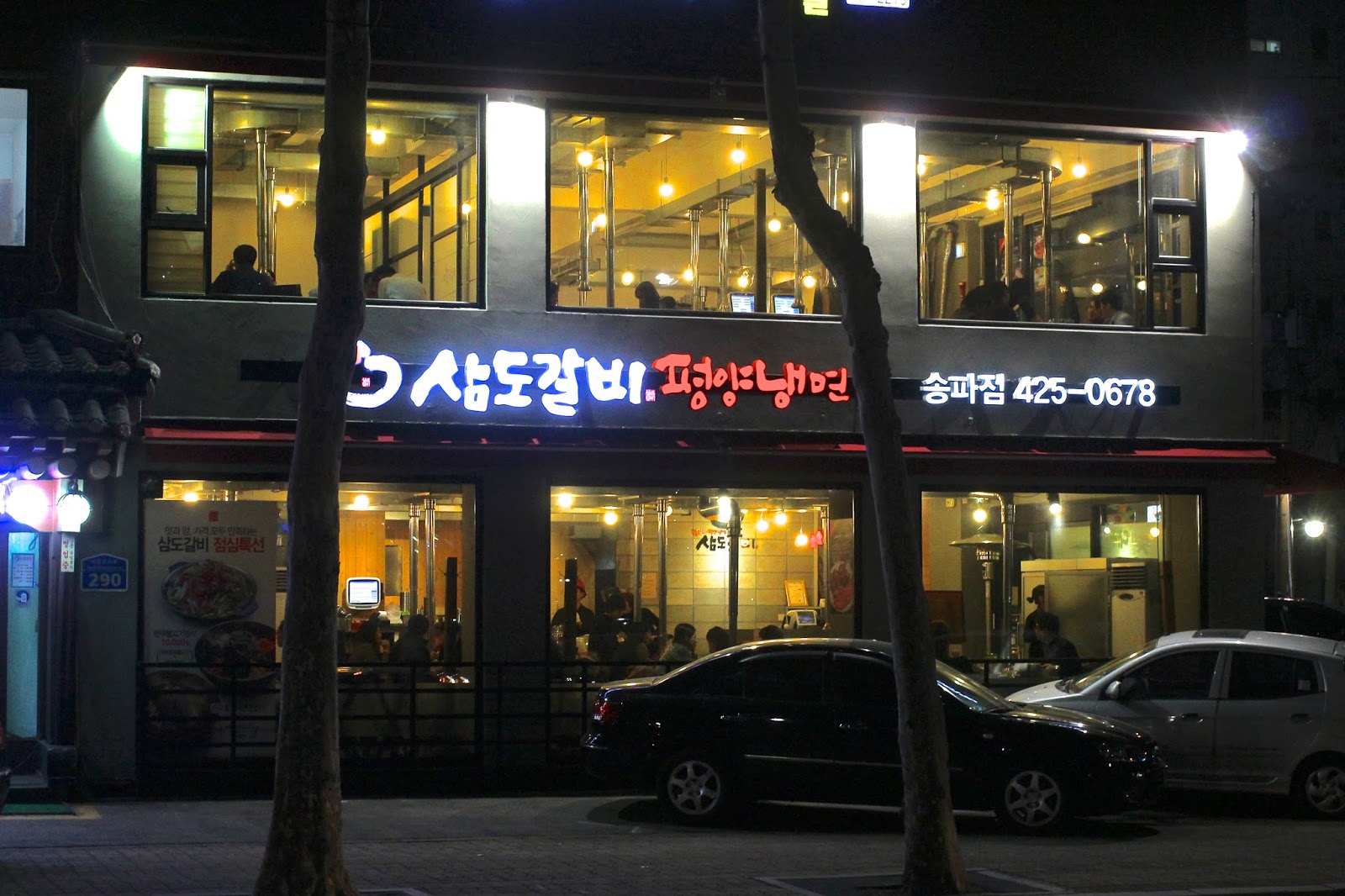 Food guru HJ found the place on the internet and told me about it, knowing my affinity for CS-PYS MNM.  It was an ideal venue, in the on-going spirit of seeking out new restaurants togethet, for our final shared meal before I leave for Manila. 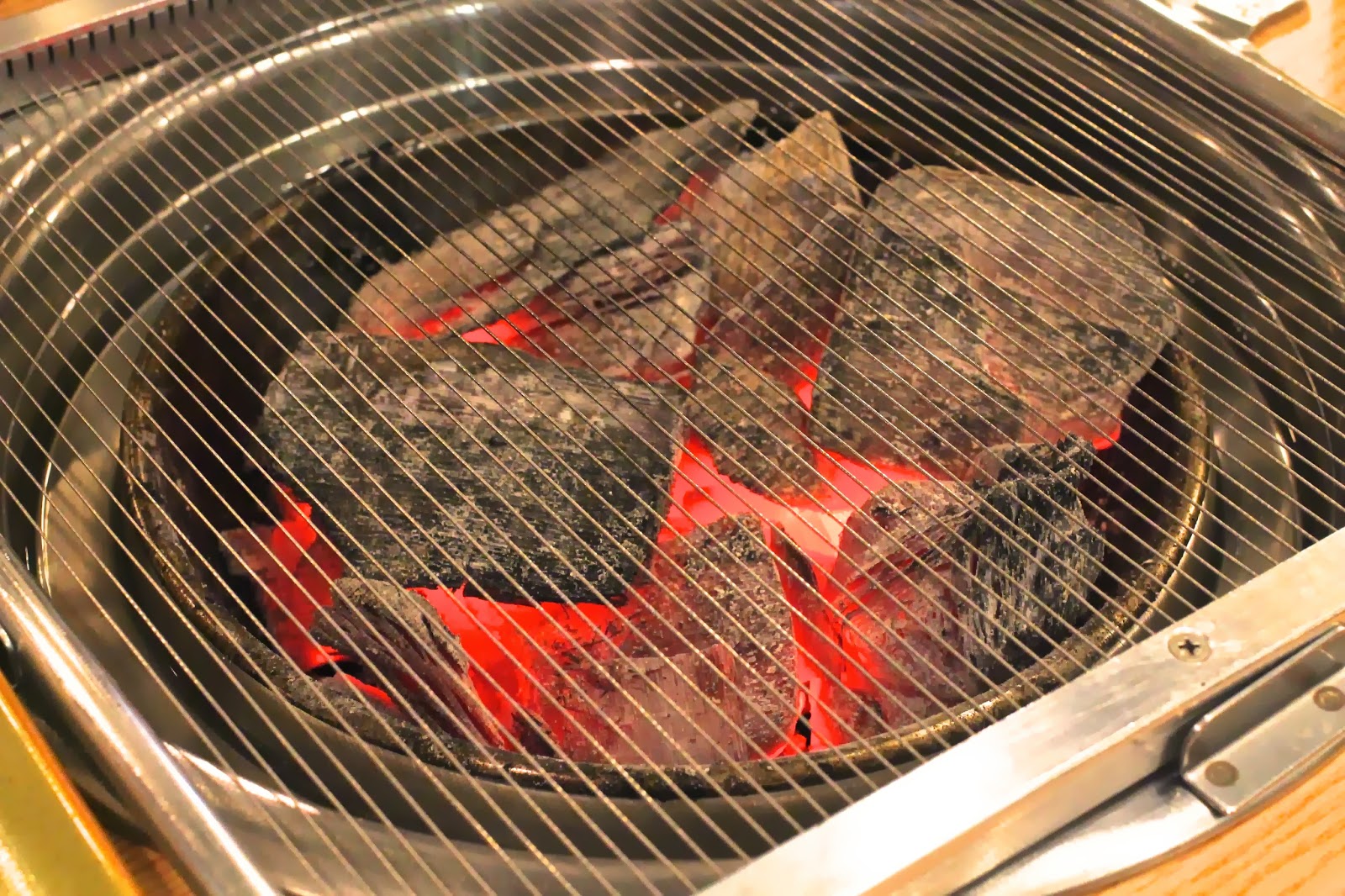 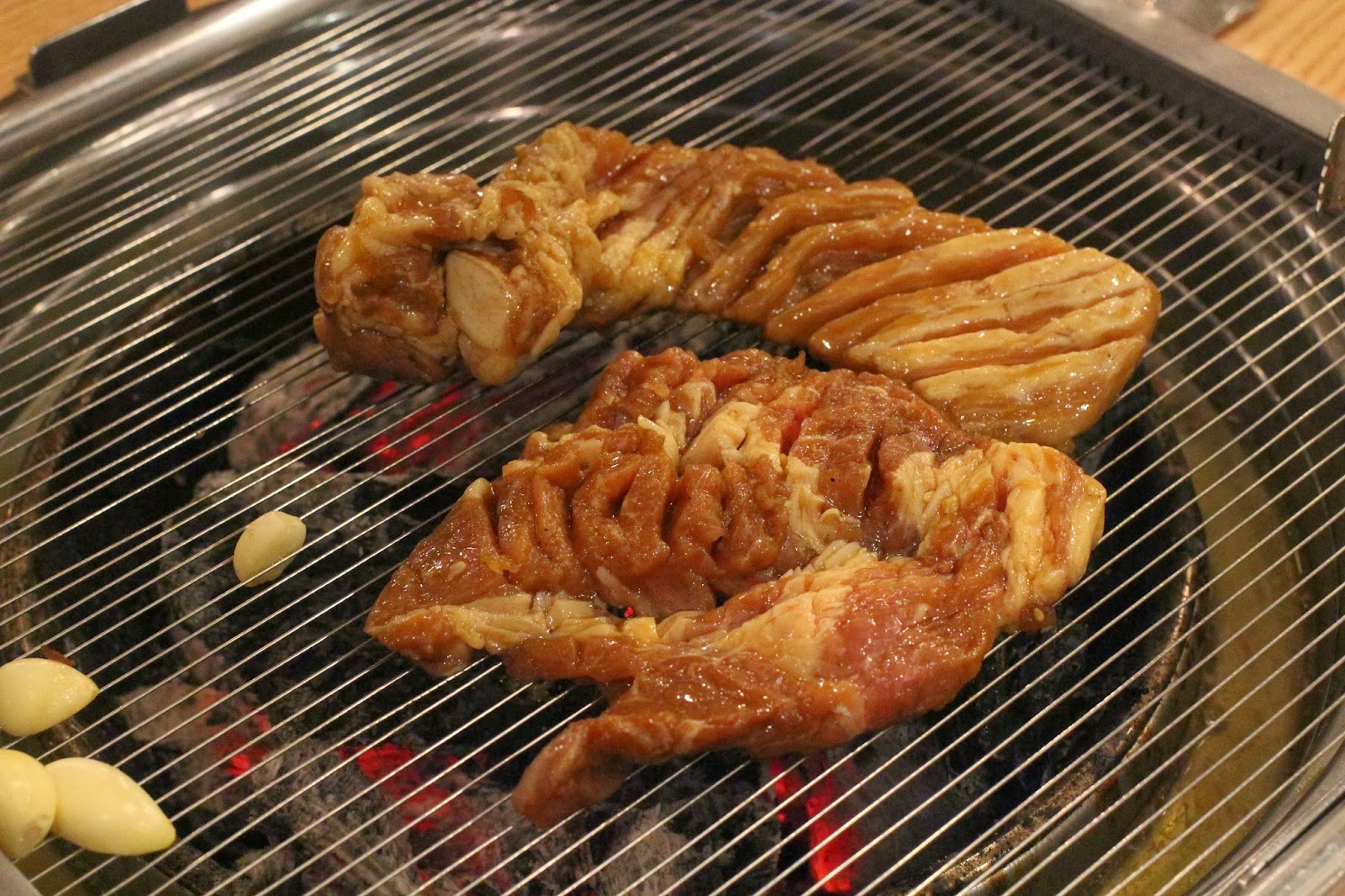 The latest in Korean BBQ tech, the grill consisted of thin wires stretched across a rectangular frame; while the reduction in cooking surface area did prevent buildup of burnt marinade, which usually requires frequent grill changes (see for example 4.234 OKRKL/10 Mapo Jinjja...), it also eliminated caramelization on the meat, which of course is part of the process that eventually leads to burning; that may explain the strangely squishy texture described below.

The food was quite respectable across the board.  The pork galbi, exceptionally well-balanced in sweet and salty, was so moist/tender that it almost felt raw (still deciding if that's a desirable quality, with pork).  The sides, none noteworthy per se, but well-varied in composition, an atypical spread for BBQ, nary a red kimchi on the table.  The MNM, with the brass bowl and the toppings, particularly the egg ribbon, was an obvious copycat of the highly esteemed MNM from Bong Piyang (see generally 4.179 The Bong Piyang MNM...).  Texturally too, the noodles had a similar squarish mouthfeel, though nowhere near the same level of buckwheat mealiness, the taste also falling short, as if they used the same type of noodle press, but a different dough recipe.  The broth was respectably dry, rather short on beef flavor, yet refreshing in its own right.  I wouldn't go out of my way to dine at Samdo Galbi again, far away as it is for me, but I'd drop by if I happened to be in the neighborhood. 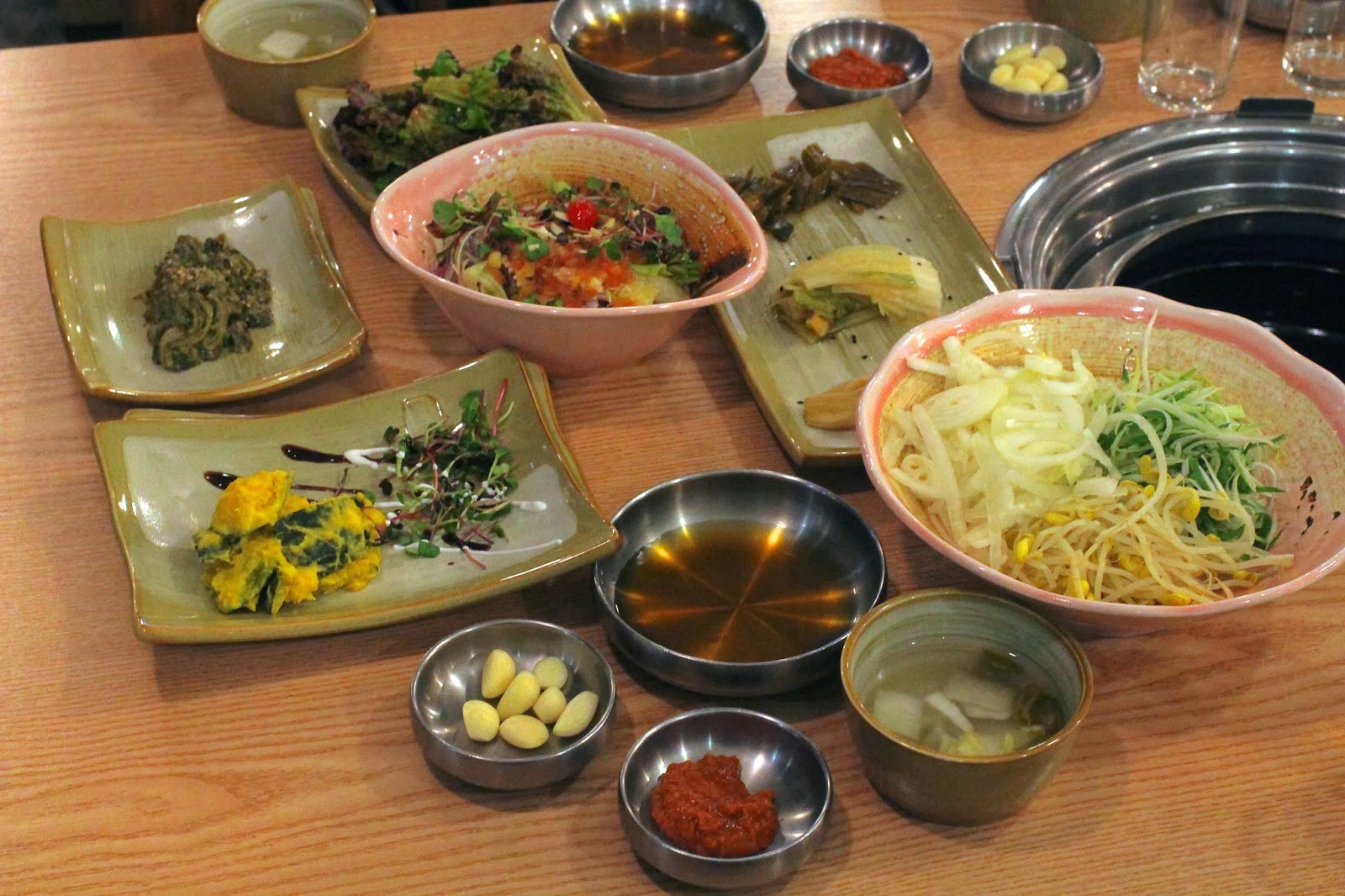 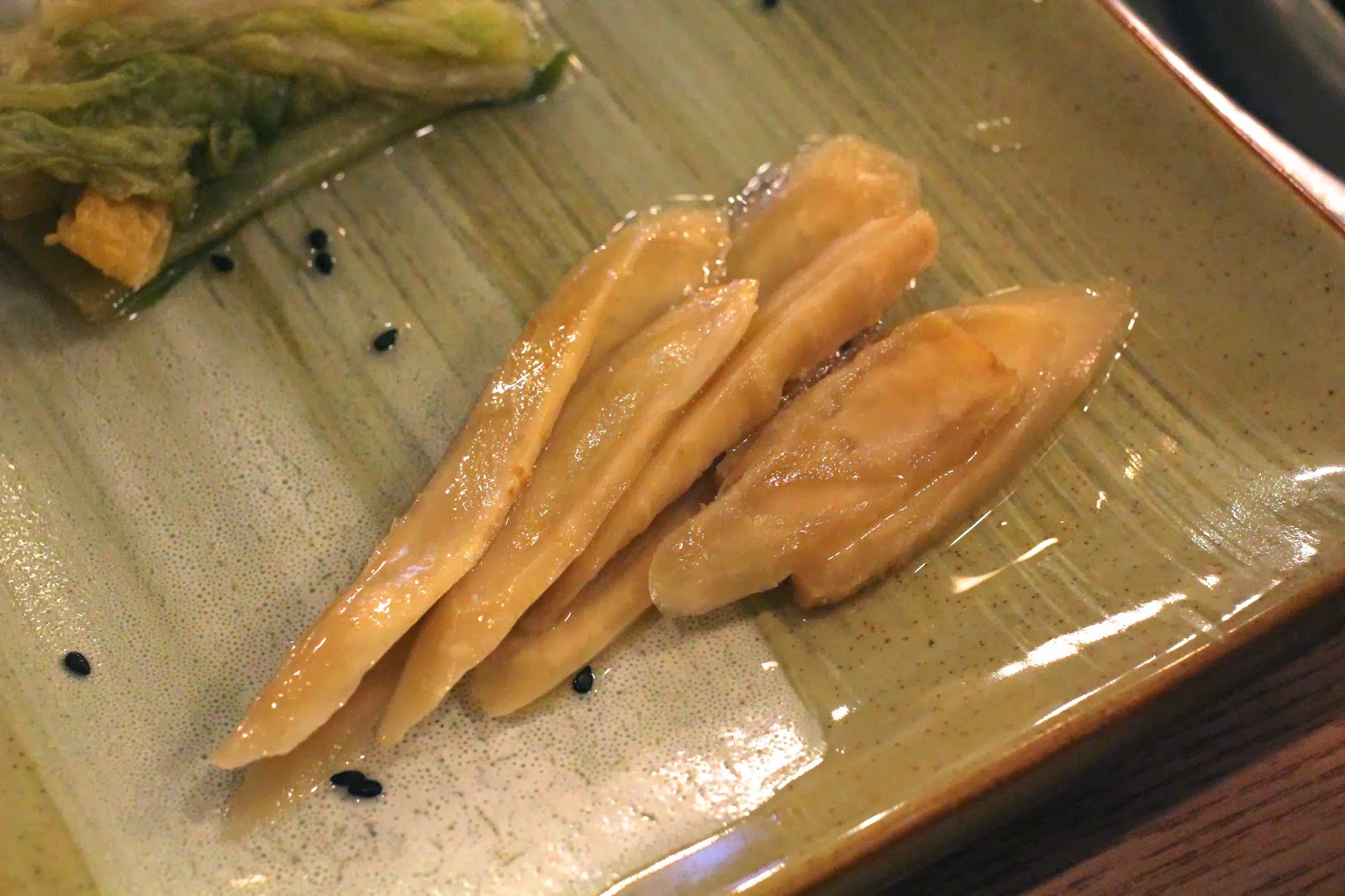 The best and most interesting side was this pickled burdock root, tangy and bitter, nice crunch.

Waiting for the others, I got through the first two chapters of Dale Carnegie's classic How to Win Friends & Influence People, which I'd brought along to read on the subway ride there.  Published in 1936, still in print, it's the book that created the very genre of self-help books.  I have no idea why I even picked it up, aside from the apparent objective of learning to manipulate everyone into liking me and doing what I want.  Anyway, in the introduction, the author claims that the reader will be "a little better equipped to meet life's situations" after reading the first three chapters.   Each chapter focuses on a guiding principle, providing examples of how it works in action.  Part One: Fundamental Techniques in Handling People.  Chapter 1: Don't criticize, condemn, or complain.  Chapter 2: Give honest and sincere appreciation. 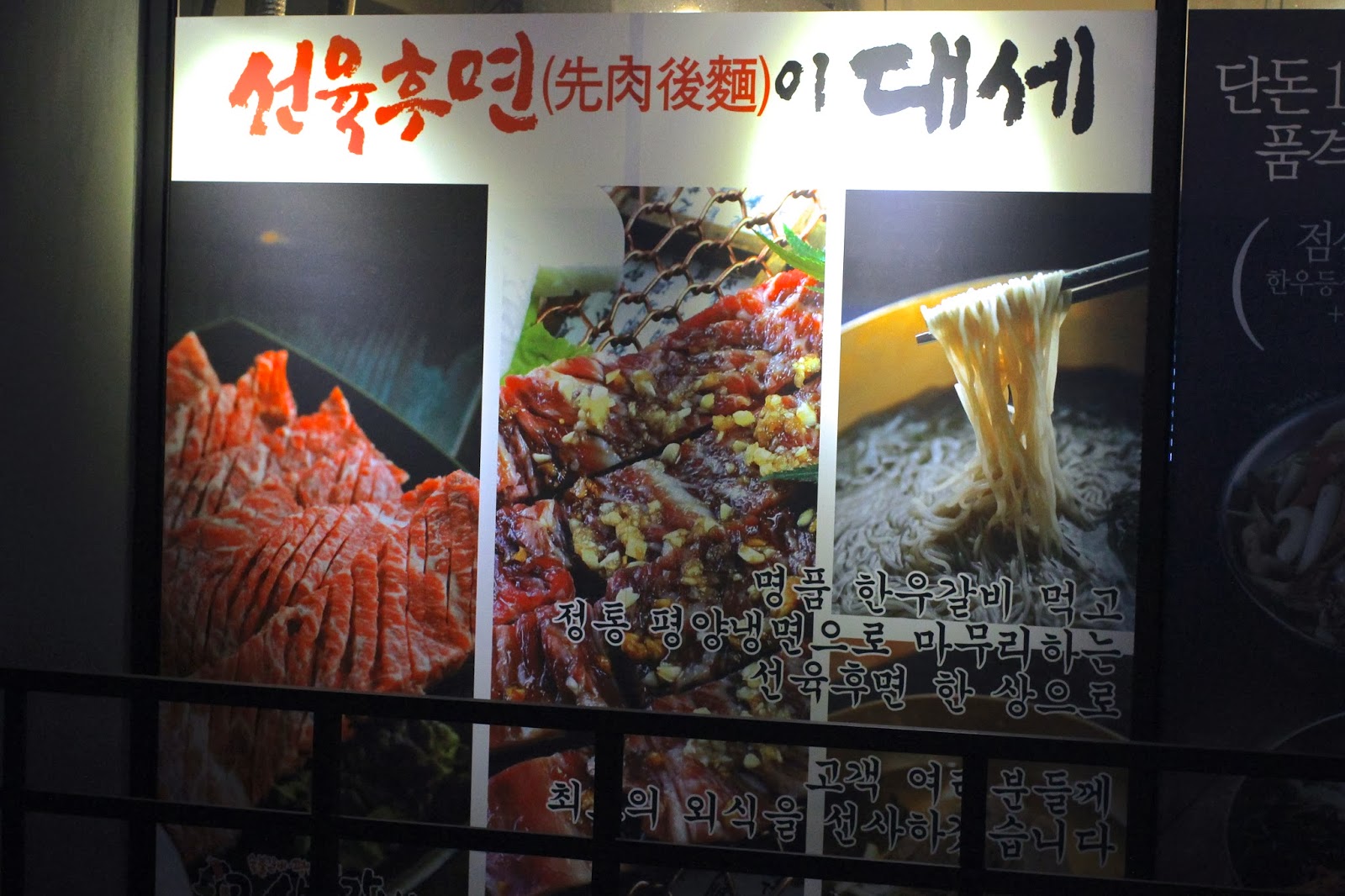 According to the poster here, the Korean tradition of starting with BBQ then finishing with MNM (see generally 3.048 Mul Naeng Myeon) has a name: "seon (선) = initially" + "yuk (육) = meat" + "hu (후) = subsequently" + "myeon (면) = noodles"--as far as I could determine, they made it up, for obvious self-serving reasons; for me, "seon myeon hu yuk," which has a much nicer ring to it.

I had three bowls of MNM this evening.  The restaurant offered half-size portions for customers also ordering meat (another bite off the Bong Piyang model).  As per my MO, I ordered an initial half-size bowl.  Frankly, the first impression wasn't very favorable, the noodles being slightly overcooked and thus mushy, as poorly executed PYS noodles can be.  The server asked how I was enjoying them.  DON'T CRITICIZE, CONDEMN, OR COMPLAIN.  "They're just fine, thank you."  Later, after we were done with the meat, I ordered another bowl.  This time, the noodles had been cooked right, resulting in a properly firm texture.  The server, whom I suspect was a uniformed manager, asked me again for my opinion.  GIVE HONEST AND SINCERE APPRECIATION.  "Unlike before, the noodles were cooked right this time, resulting in a properly firm texture.  Excellent, thank you."  Without hesitation, the server/manager proudly offered me another bowl, on the house.  Having manipulated the outcome, I couldn't refuse.  So I ate a third.  It was even better than the first and second, honestly, even though I was stuffed by that point. 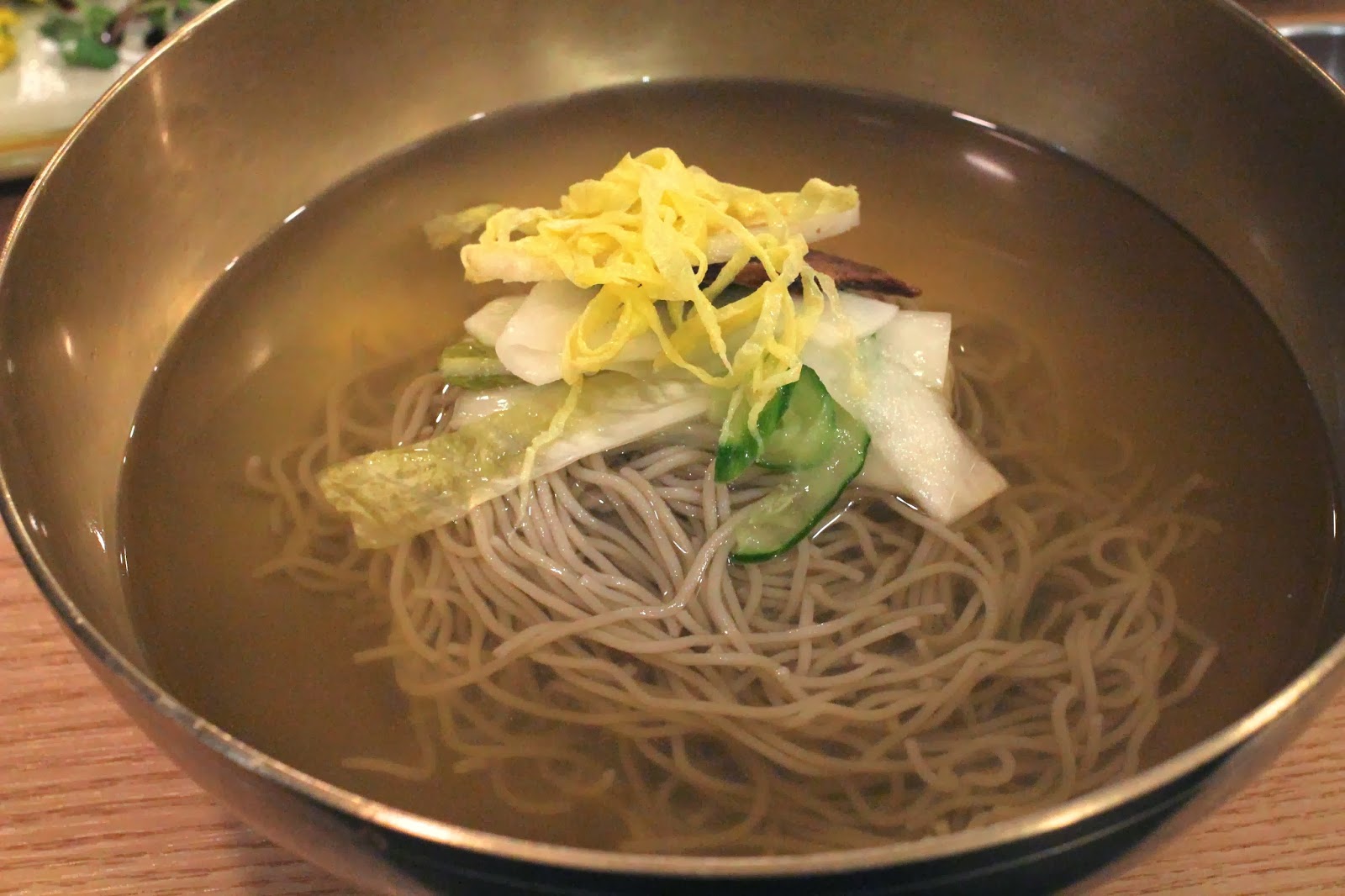 Bowl 1: tellingly, the overcooked noodles don't adhere to each other.

Any casual reader of the blog should recognize the profound significance of me earning free CS-PYS MNM.  As I may be ending the blog at the end of the cycle--haven't yet decided--I can't help but think that this post would've been the most poetic way to go out, on the ultimate high note. 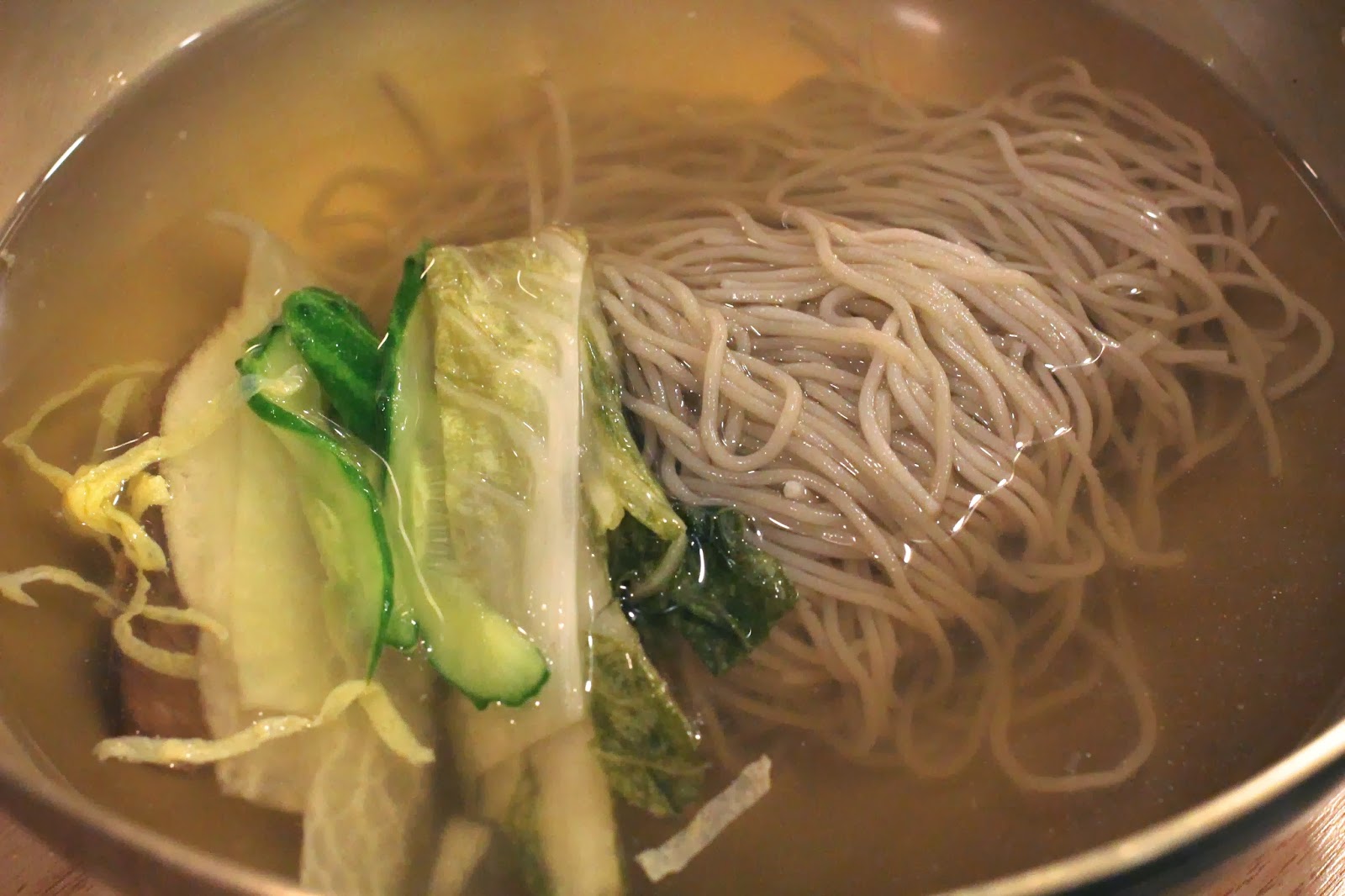 Bowl 2: better, but still a bit loose, and the toppings were carelessly assembled, falling off to the side.

Anyone who knows me personally should recognize the profound significance of me accomplishing anything by positive reinforcement, as I tend to think/speak/act/write towards the cynical/snarky or the dismissive/antipathetic if not the outright bellicose/vitriolic.  In any case, whether I do continue the blog, it would remain as lovably nasty as ever, because I don't write the blog to win friends or influence people. 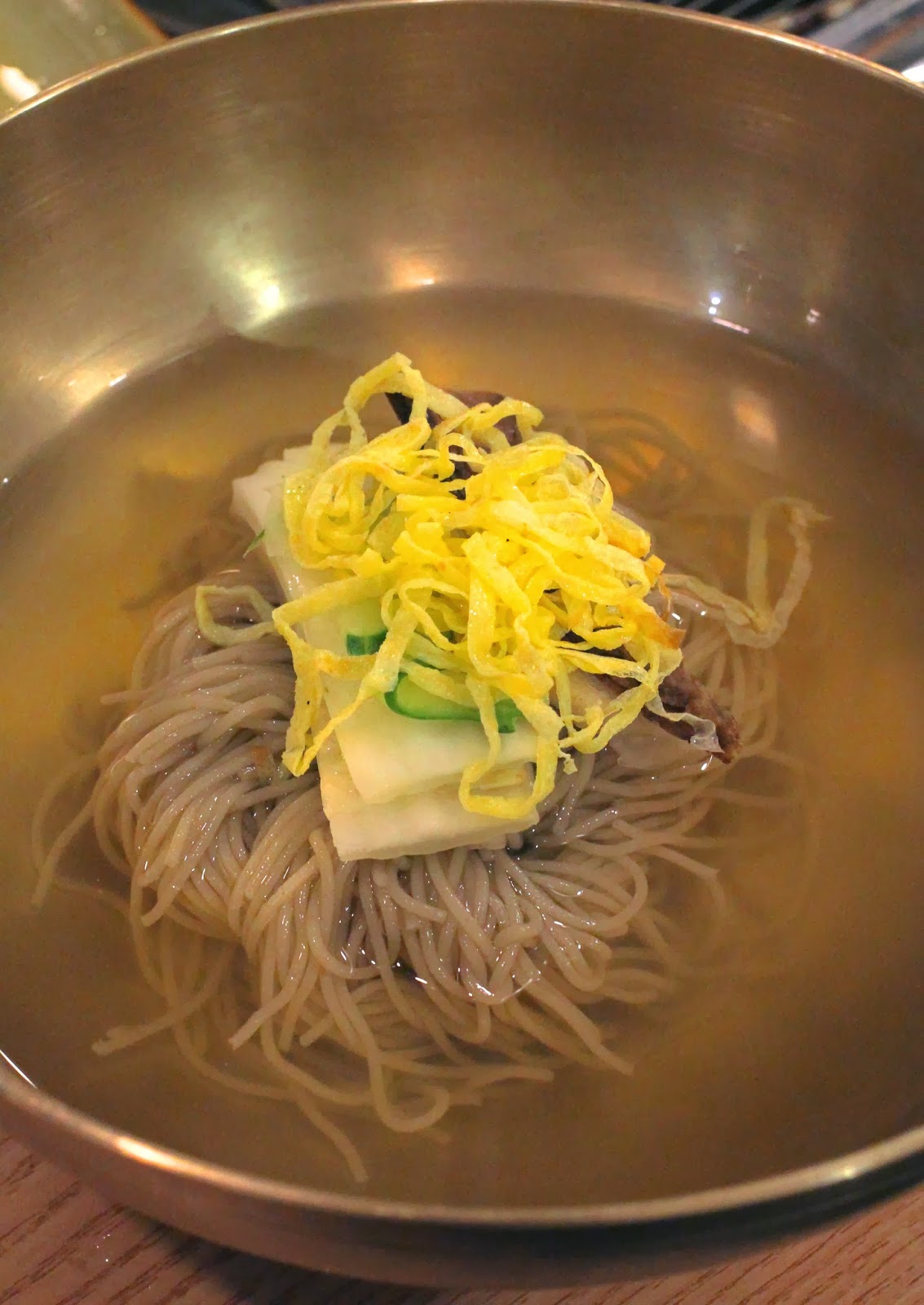 Bowl 3: finally, everything as it should be.

Incidentally, HJ and HY both insist that I got the free bowl of MNM on account of my DSLR camera, which scared management into thinking that I might be a power blogger, a phenomenon that they claim occurs with me all the time.  Come to think of it, I do seem to get a lot of freebies at restaurants these days (see for example 4.331 Special Nigiri Sushi Set), even though the blog itself gets me jack.

3 meals remaining in the cycle.