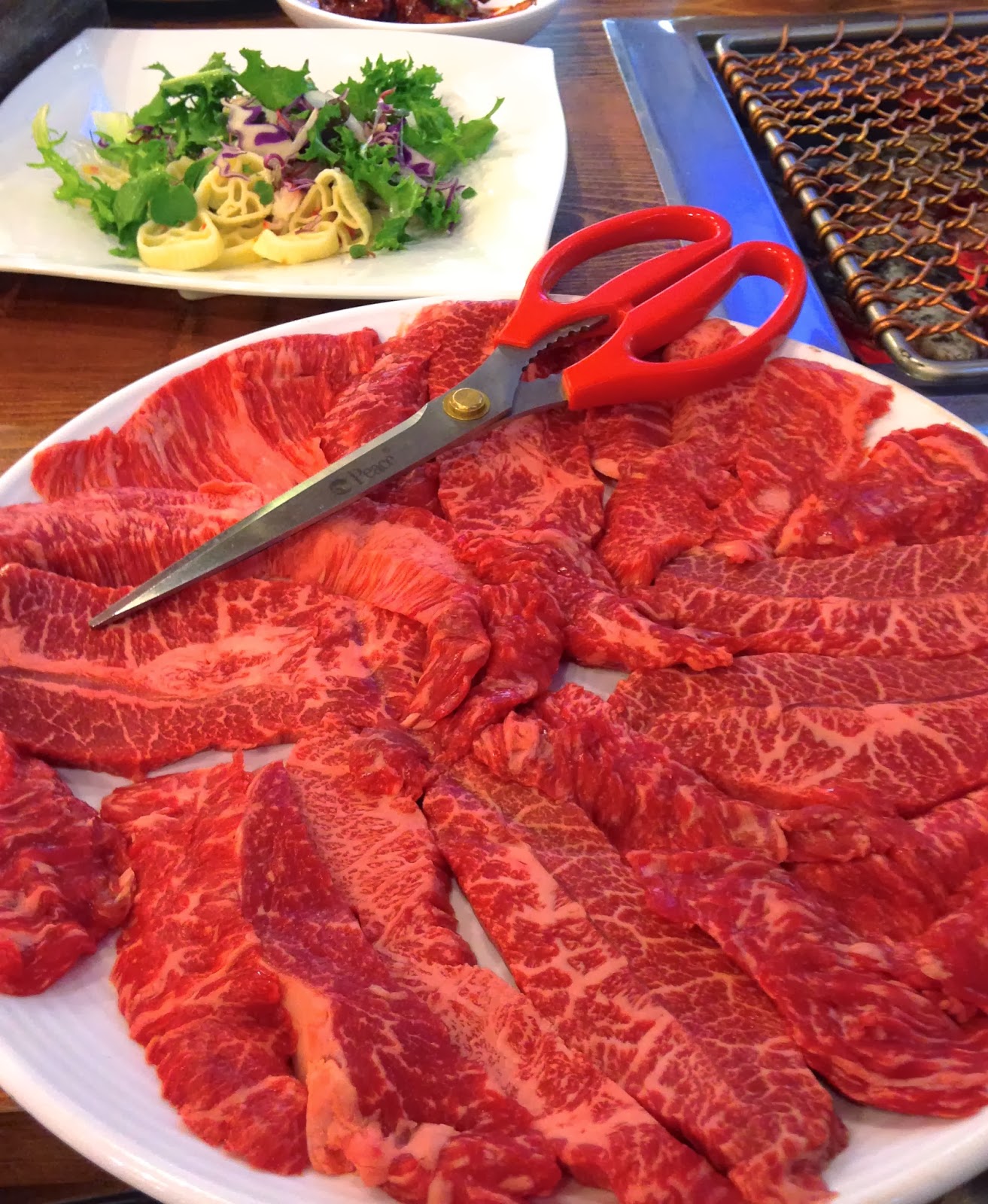 Having spent the night at my parents' place and done all the bowing stuff with them in the morning--more on that tomorrow--the plan had been to pass the afternoon/evening at the in-laws', but the mother-in-law wasn't feeling well and called it off.

So, we were on our own for dinner.  However, I was in no mood to cook.  The wife is never in a mood, much less capacity, to cook.  Unfortunately, the 3-day Lunar New Year holiday being one of Korea's two most sacred--along with Chuseok--the vast majority of restaurants across the country are closed.  Then, I remembered that Deo Keun Jib (see most recently 3.238 Seolleong Tang), right across the river, is open 24/7/365.  So, that's where we went. 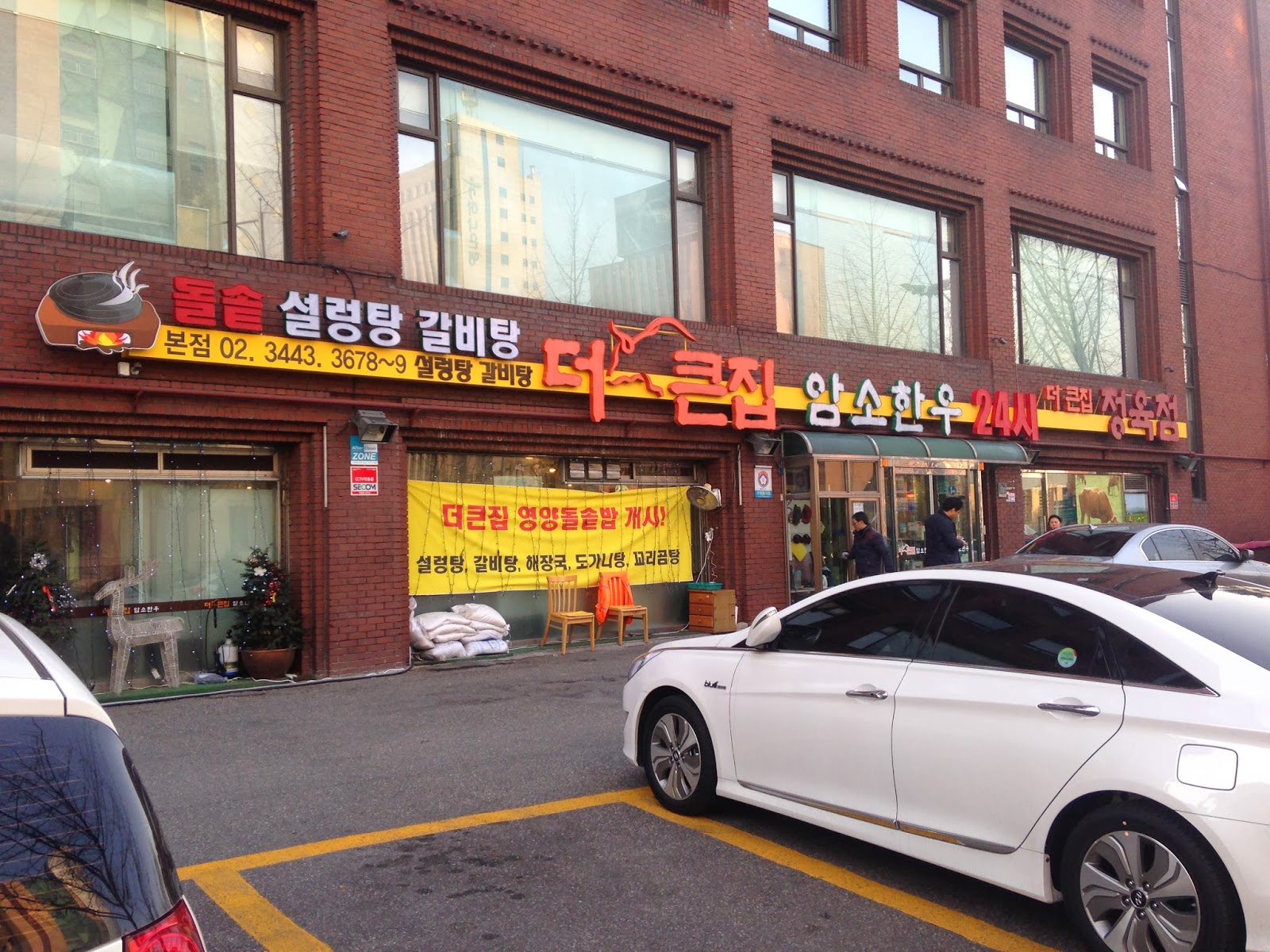 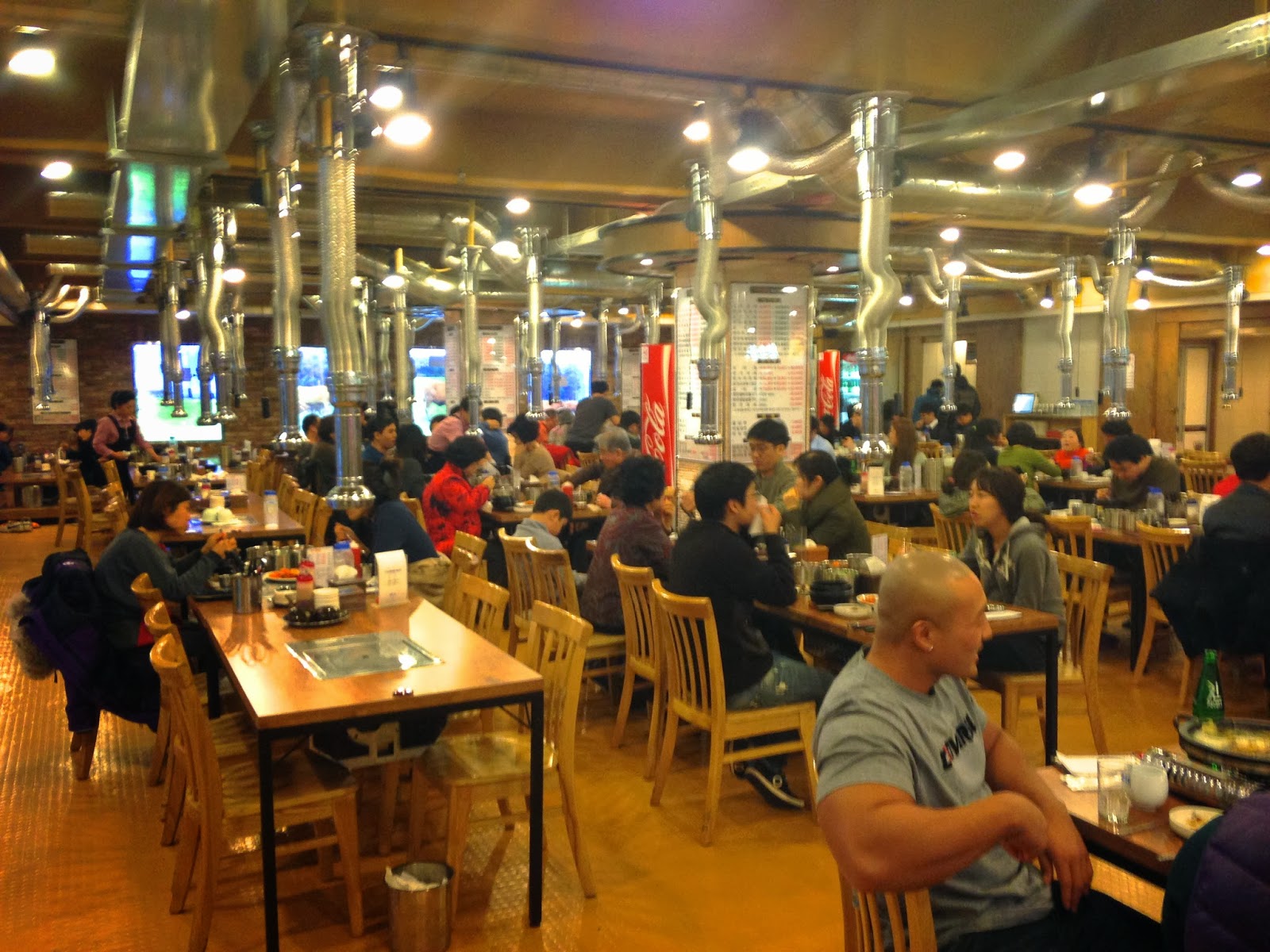 With very few dining options in town, the place was packed, though I didn't see any other table eating barbecue. 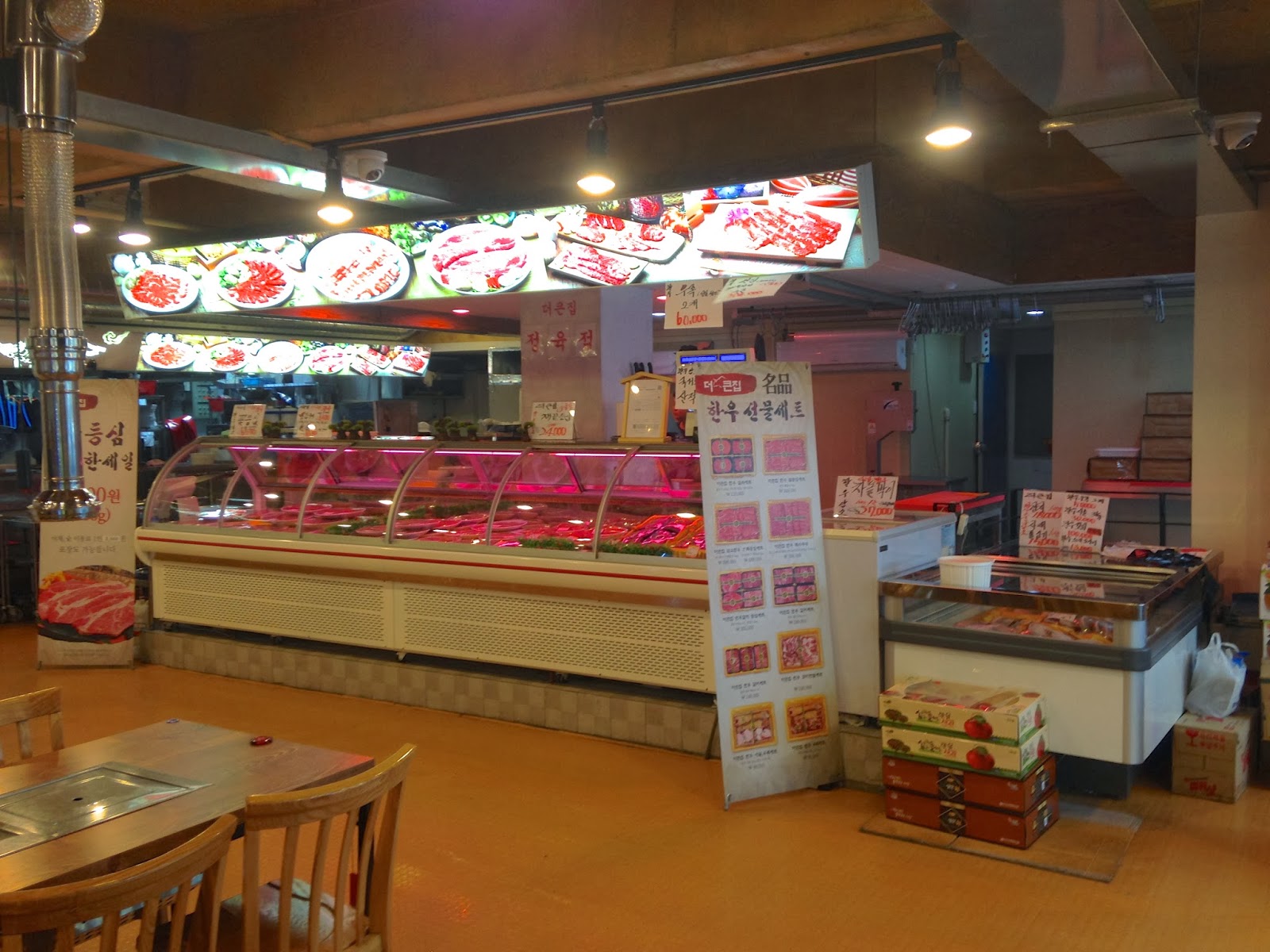 Meat counter where the cauldrons of boiling beef bones once stood. 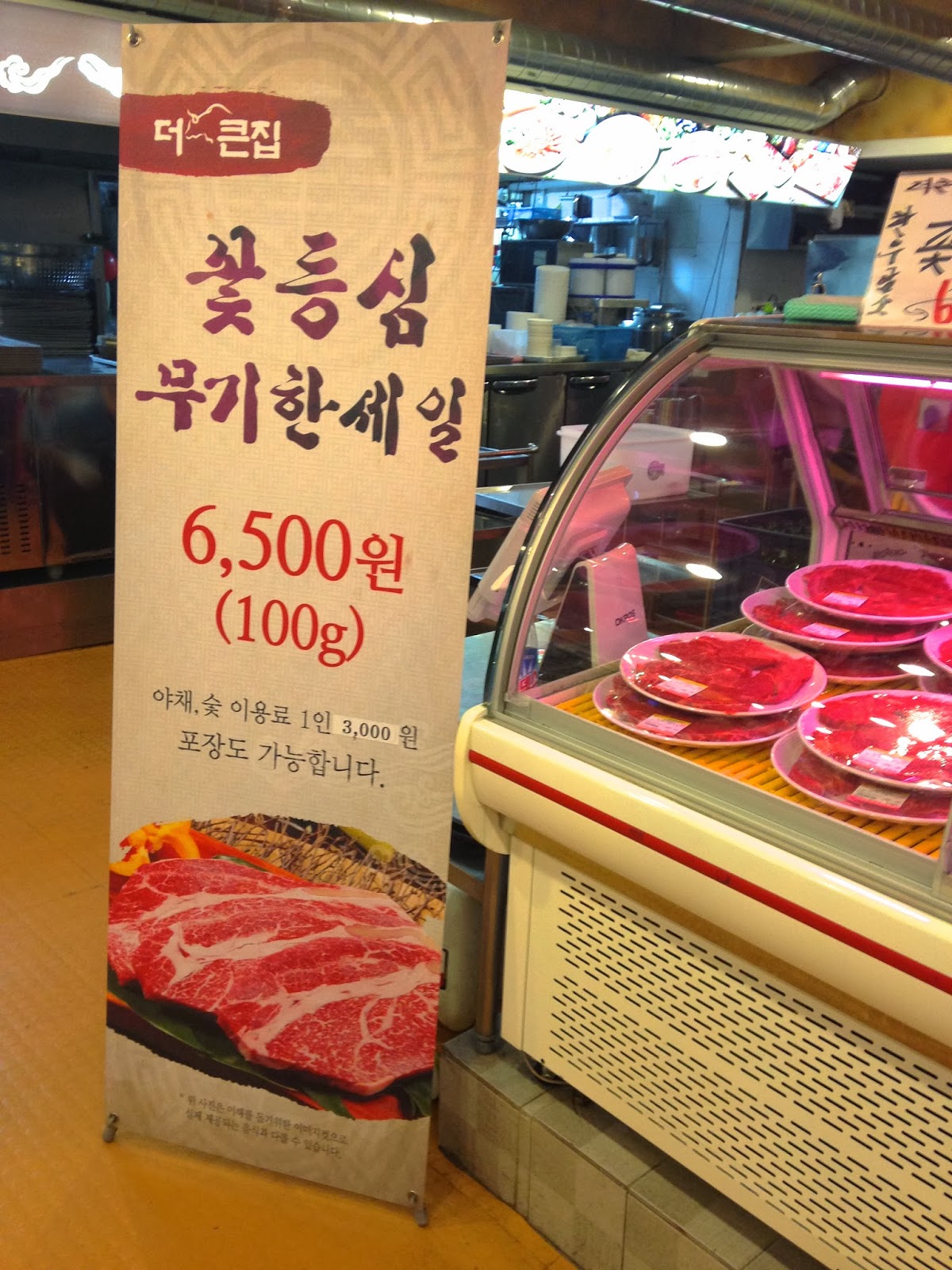 Even in a joint like this, I can't resist the point-of-sale marketing. 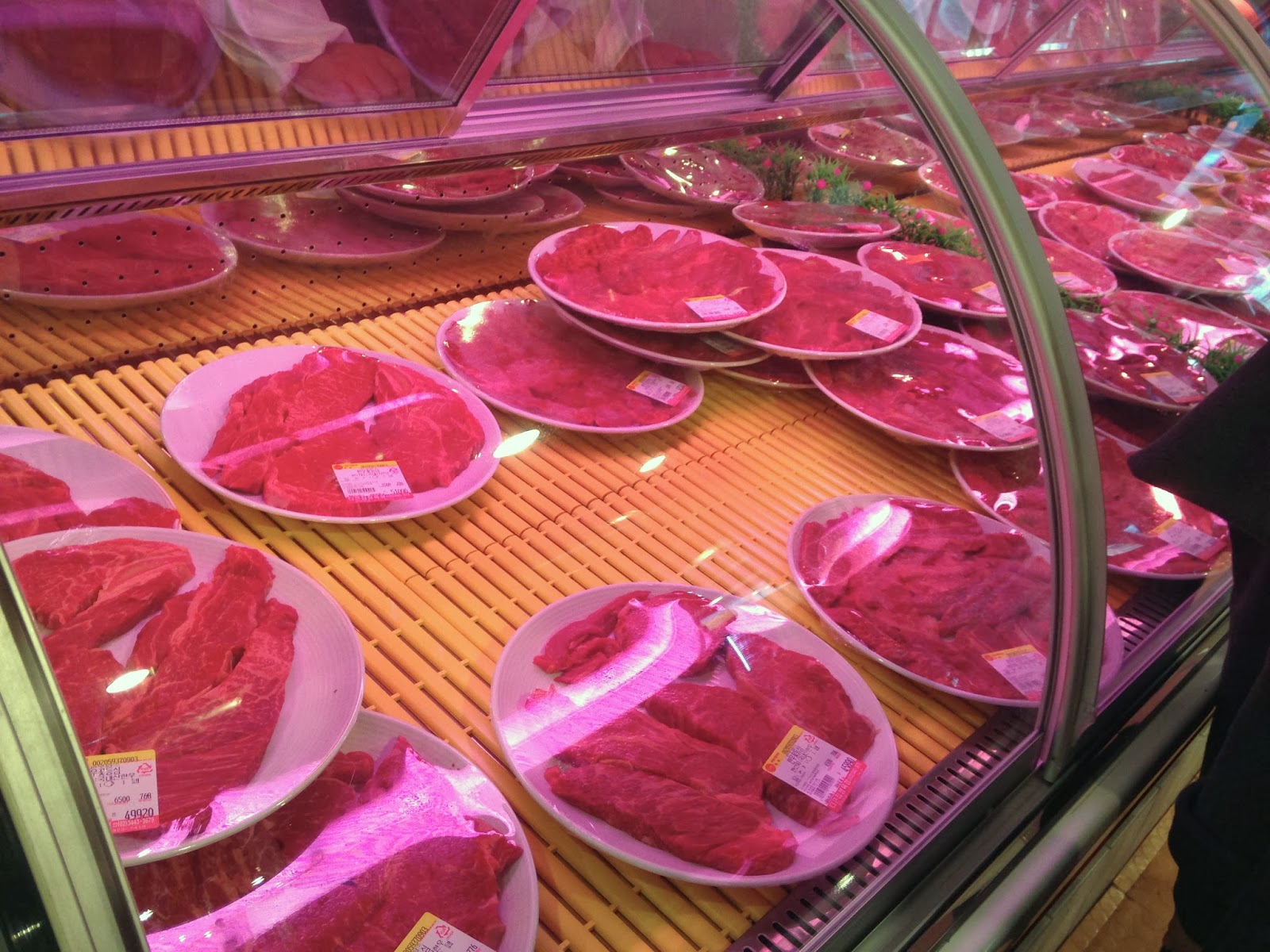 Not really a butcher shop, as the beef is presliced and prepriced, ranging from 35,000 won to 150,000 per platter, depending on cut/grade/amount. 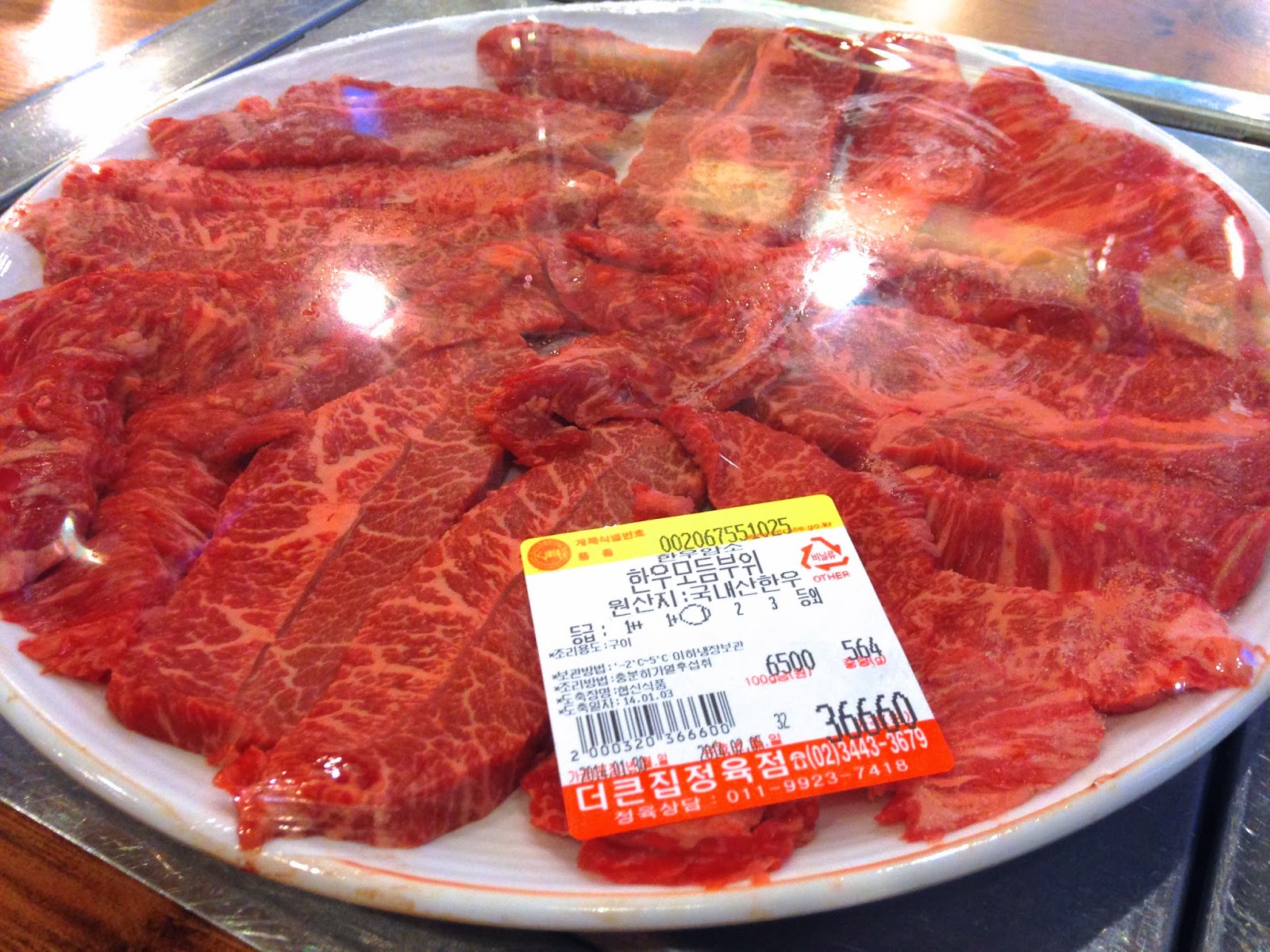 At the special holiday rate, 36,660 won for 544 grams of grade-1 hanwoo in various cuts, ridiculously cheap by restaurant standards, especially in Gangnam, maybe 1/3 to 1/4 of the regular price.

We'd never before tried the meat, always just something from the soup menu.  Since our last visit many years ago, the barbecue part of the business had become one of those a quasi-butcher shop arrangements (see generally 2.190 Grilled Beef Brisket).  When I saw the point-of-sale promotional poster for a holiday special, it was a done deal.  The prices were good (hook).   The meat looked good (line), especially in light of crappy beef that I'd had in Manila (see for example 5.022 Wagyu Course).  And I was overwhelmed by the urge to feed my sons meat (sinker). 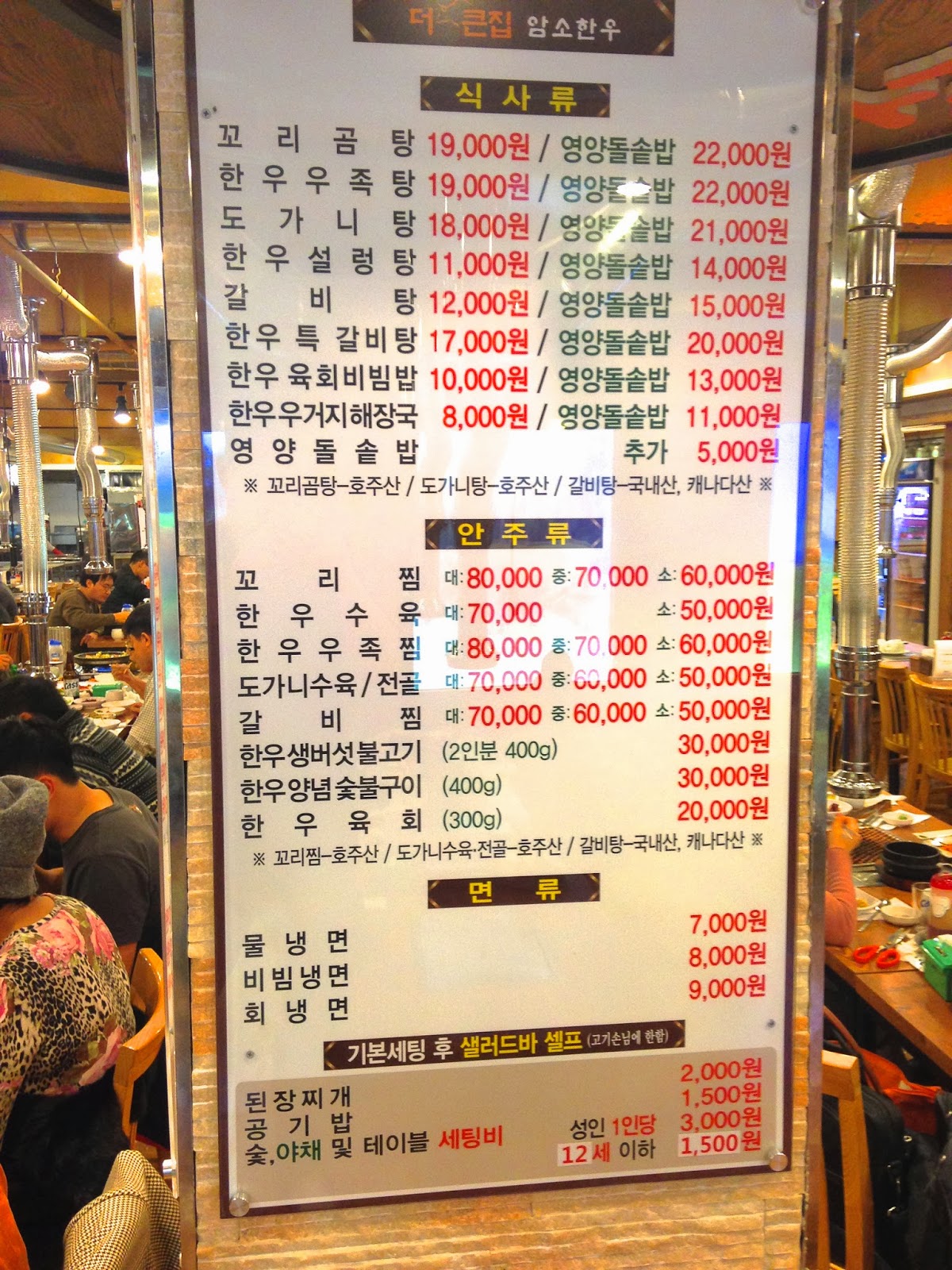 Mostly variations of boiled/braised beef; at the very bottom, a "setting fee" of 3,000 per adult, 1,500 won per child, for barbecue customers.

The meal was excellent.  I can't recall the last time enjoying beef so intensely, so thoroughly, so gratefully, particularly beef in this Korean barbecue form.  The meat itself, a mixed modeum platter of mostly blade with a few slivers of salchisal and deungsim tossed in (see generally 4.197 Grilled Salchisal), was respectable enough, tasty/fatty/juicy, but I ate like I'd been starved.  Even after a mere two weeks away, I suppose that I was in desperate need of restoration. Everything else on the table was or at least seemed, same thing, great. 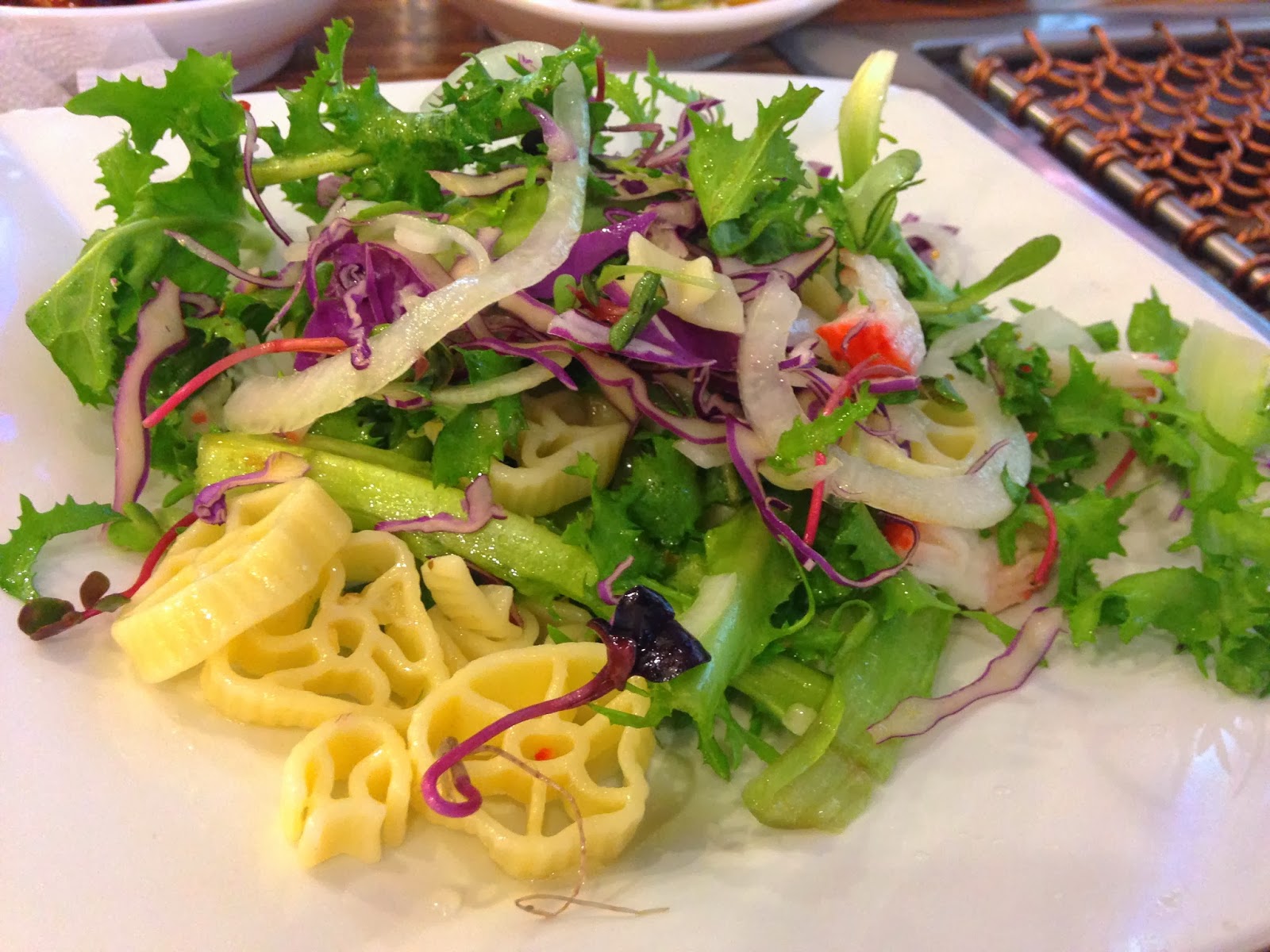 2 firsts: (i) pasta other than elbow macaroni, (ii) "Italian" dressing, like from a bottle--both only in Gangnam. 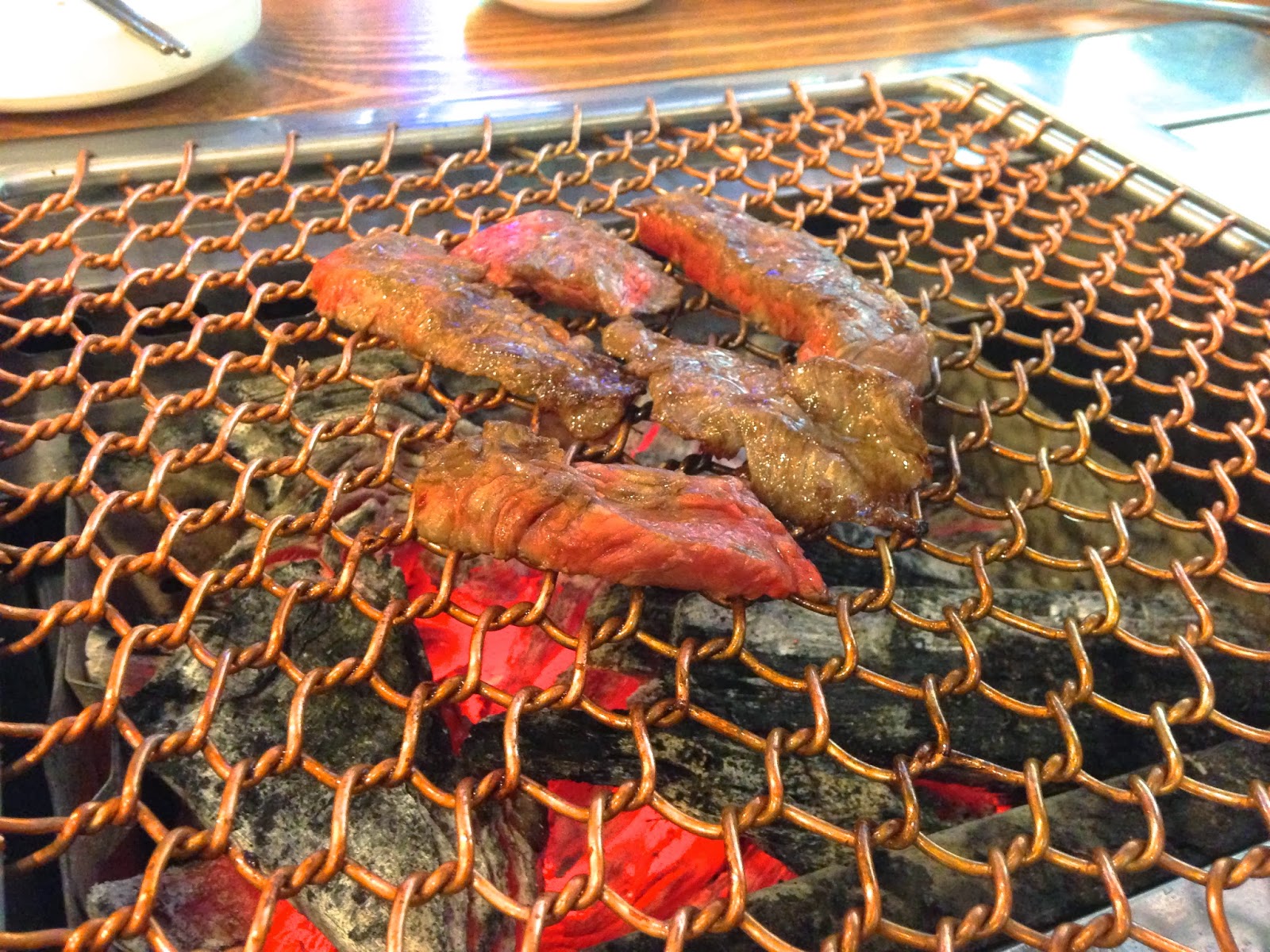 Salchisal, being so tender, all went to the boys. 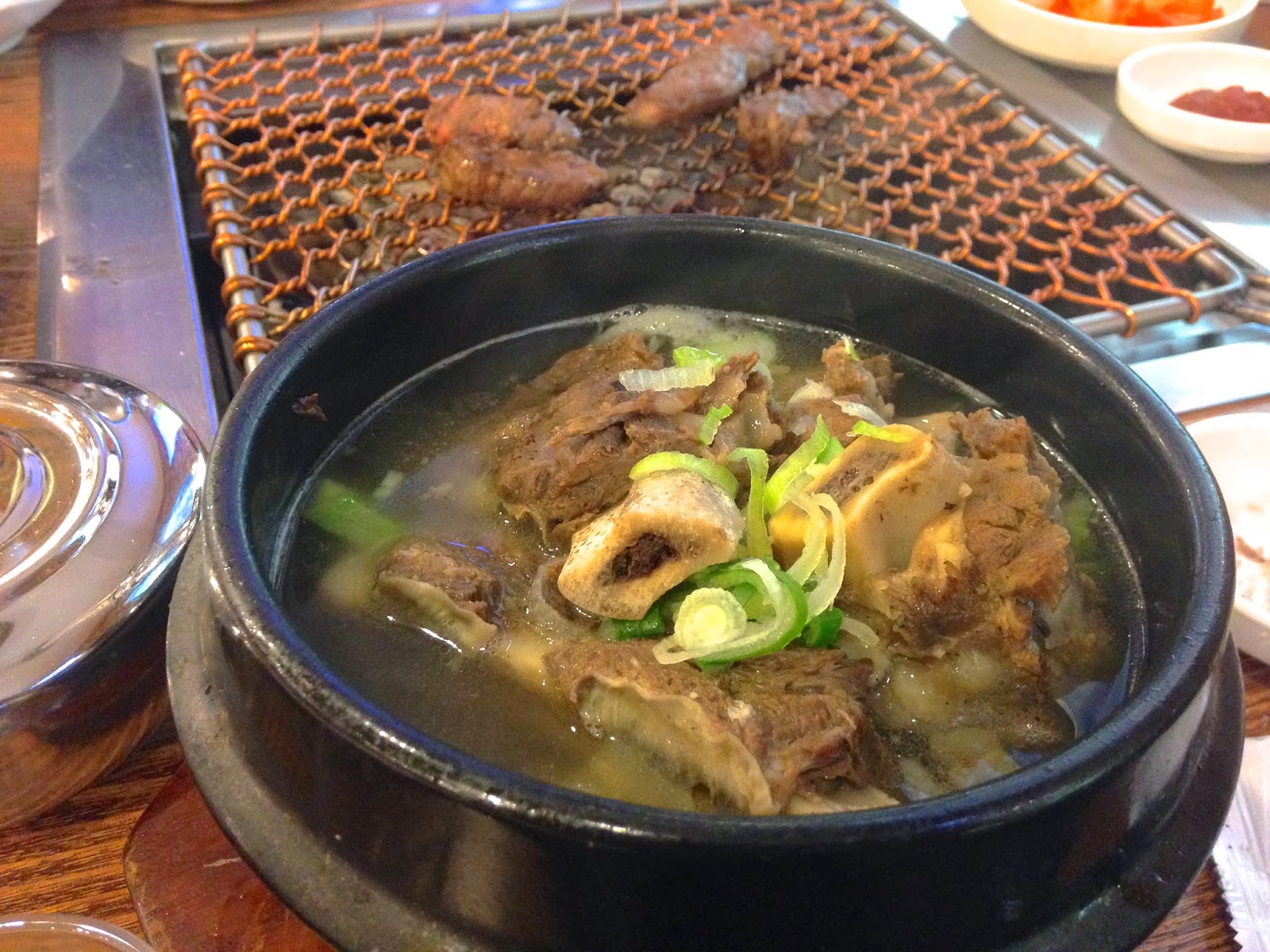 For dessert, this bowl of galbi tang, packed with ribs; objectively, not as good as Samwon Garden's (see most recently 5.001 Galbi Tang), but it seemed better on this occasion.

Or maybe it was just spending quality time with the family.