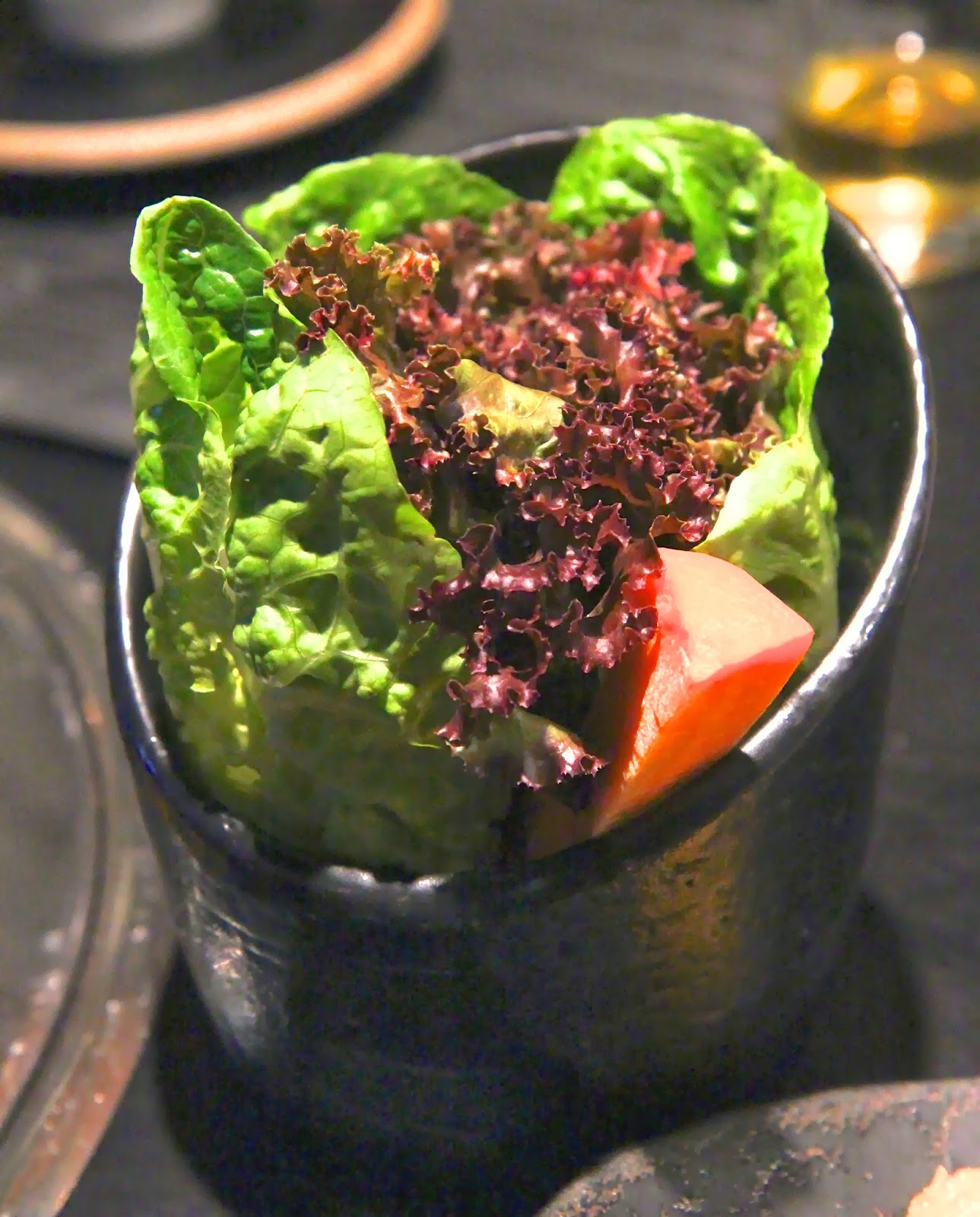 with various WHO Korean staff, including Lee Y

Bonifacio is a neighborhood of Taguig City, Metro Manila.  Bordering and often considered part of Makati City to the north.  Also known as "Bonifacio Global City (BGC)," even though it's not an actual city, and "Fort Bonifacio" or "The Fort," because it's where the Philippines Army was once headquartered.  Whatever is true about Makati as an upper crust expat enclave (see generally 5.005 Ki for Ki), double it for BGC, which is constantly undergoing redevelopment to become ever bigger and ever snazzier. 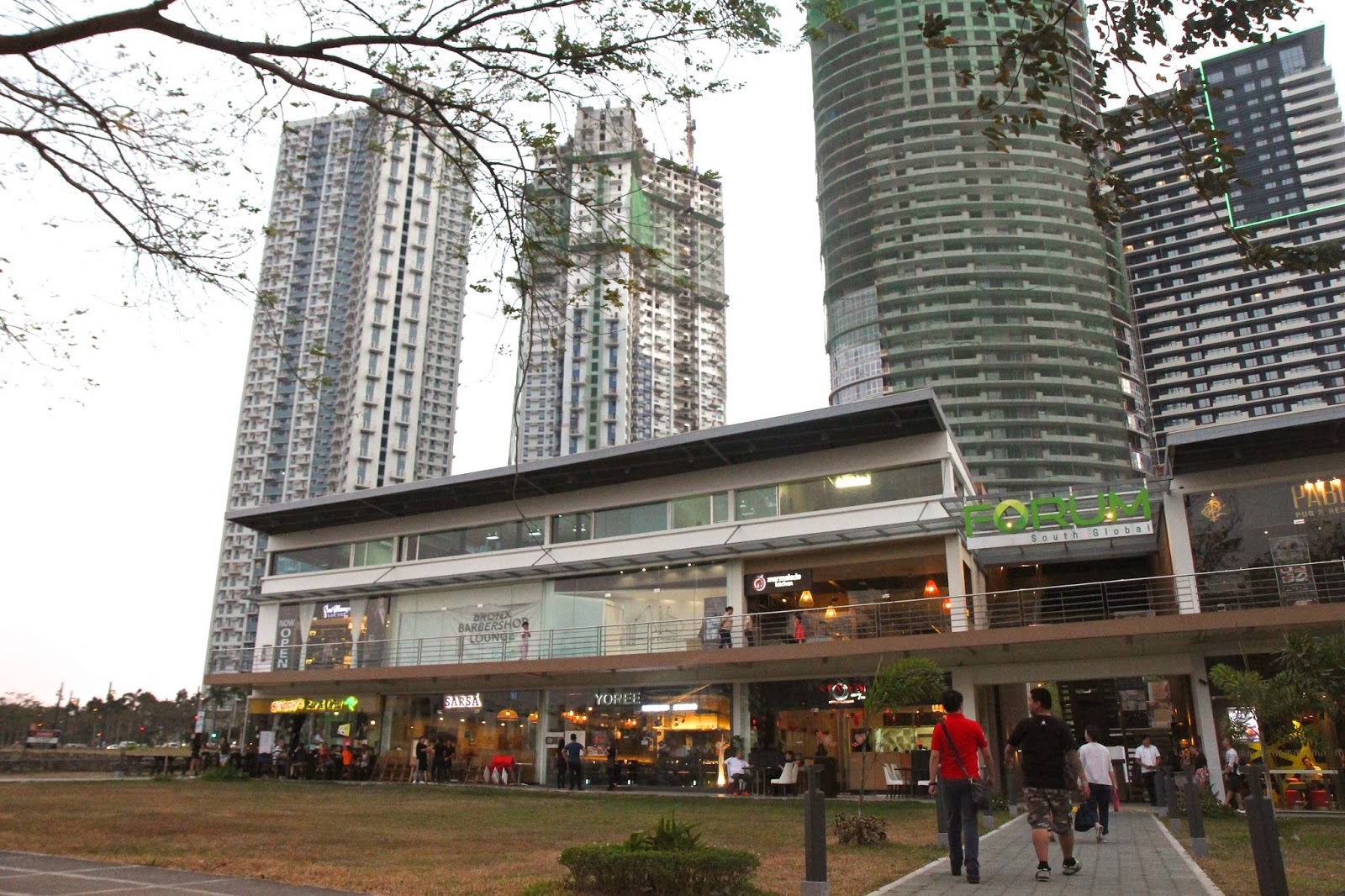 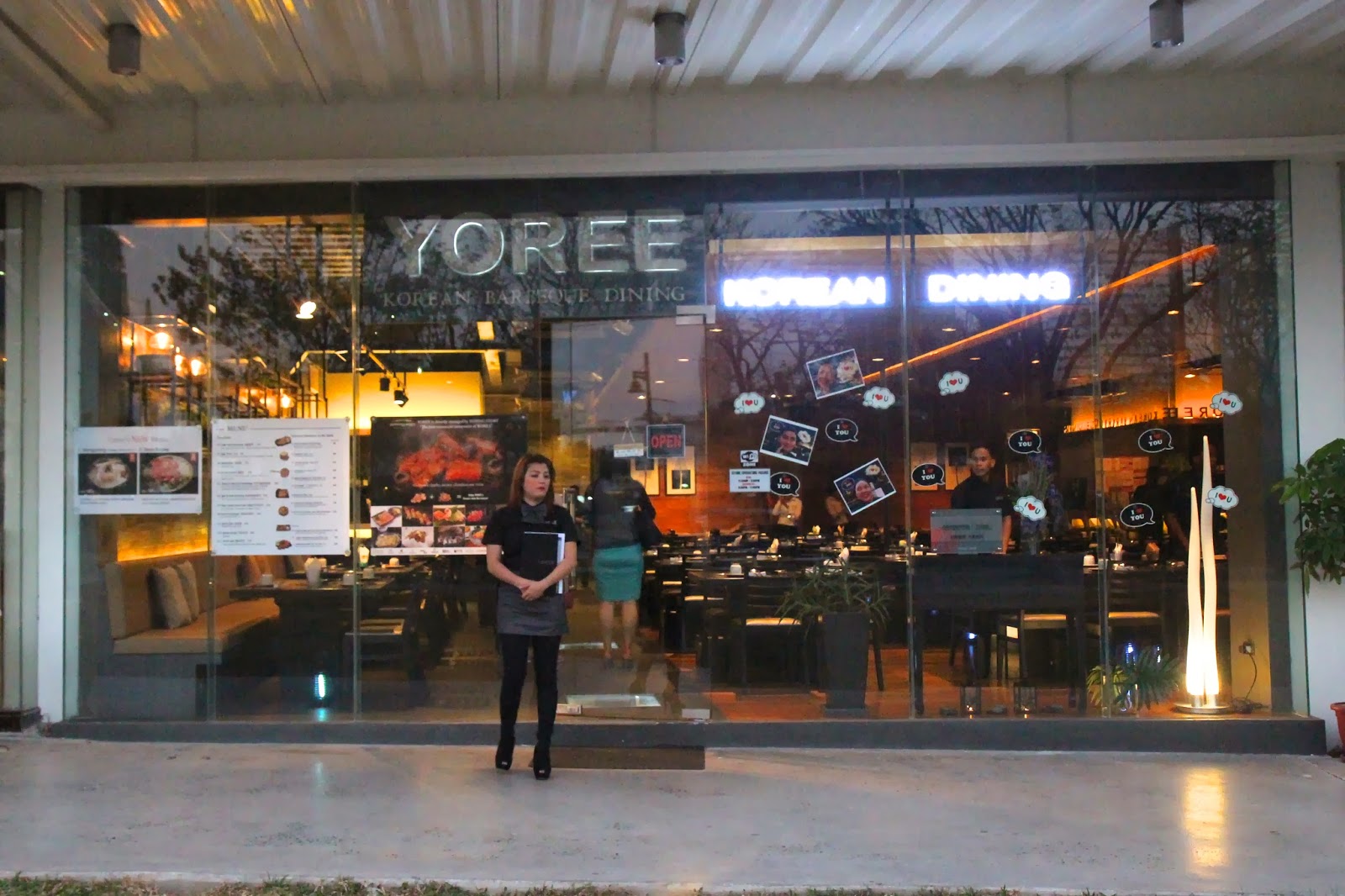 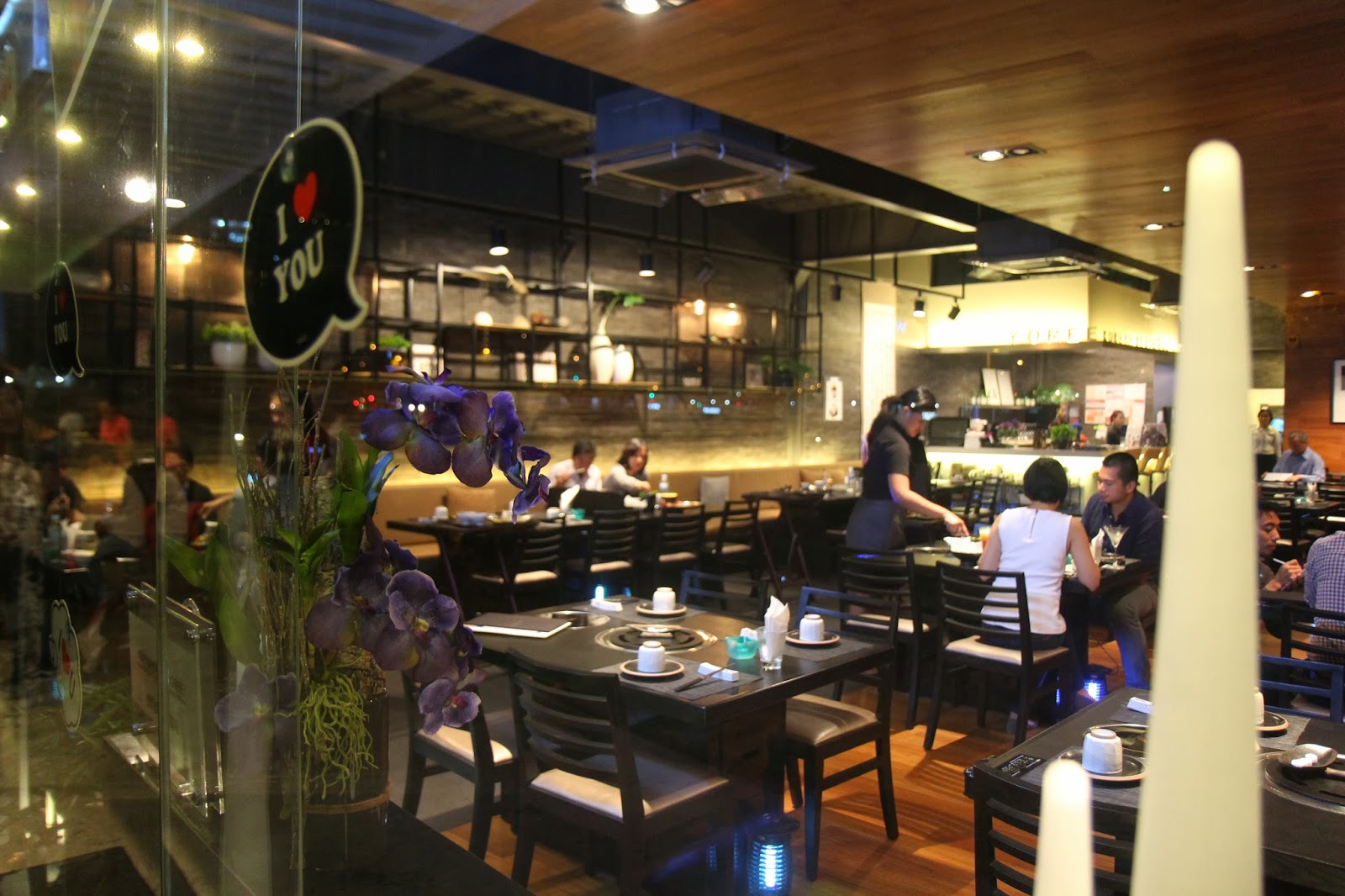 
Yoree is a Korean restaurant.  Part of the company Diningstory, a budding Seoul-based restaurant empire that owns 13 brands, 23 restaurants, anchored by the famous Sawol-e Boribab (4월에 보리밥)--which brought country-style cooking, symbolized by barley rice, into the heart of glitzy Gangnam and made it seem chic--now branching out overseas, including the Philippines.  Located in BGC, loyal to its corporate family traditions, everything on the surface of Yoree is geared towards the ultra-modern/hip.  Dark lighting, minimalist black interior design, digitally controlled table-top grills and induction pads, roughly hewn Japanese plates and old-school French crêpe pans used in the presentation of the food.  The menu, however, featuring no more than the usual suspects, doesn't appear to offer anything new or particularly fancy--though it does, as explained below. 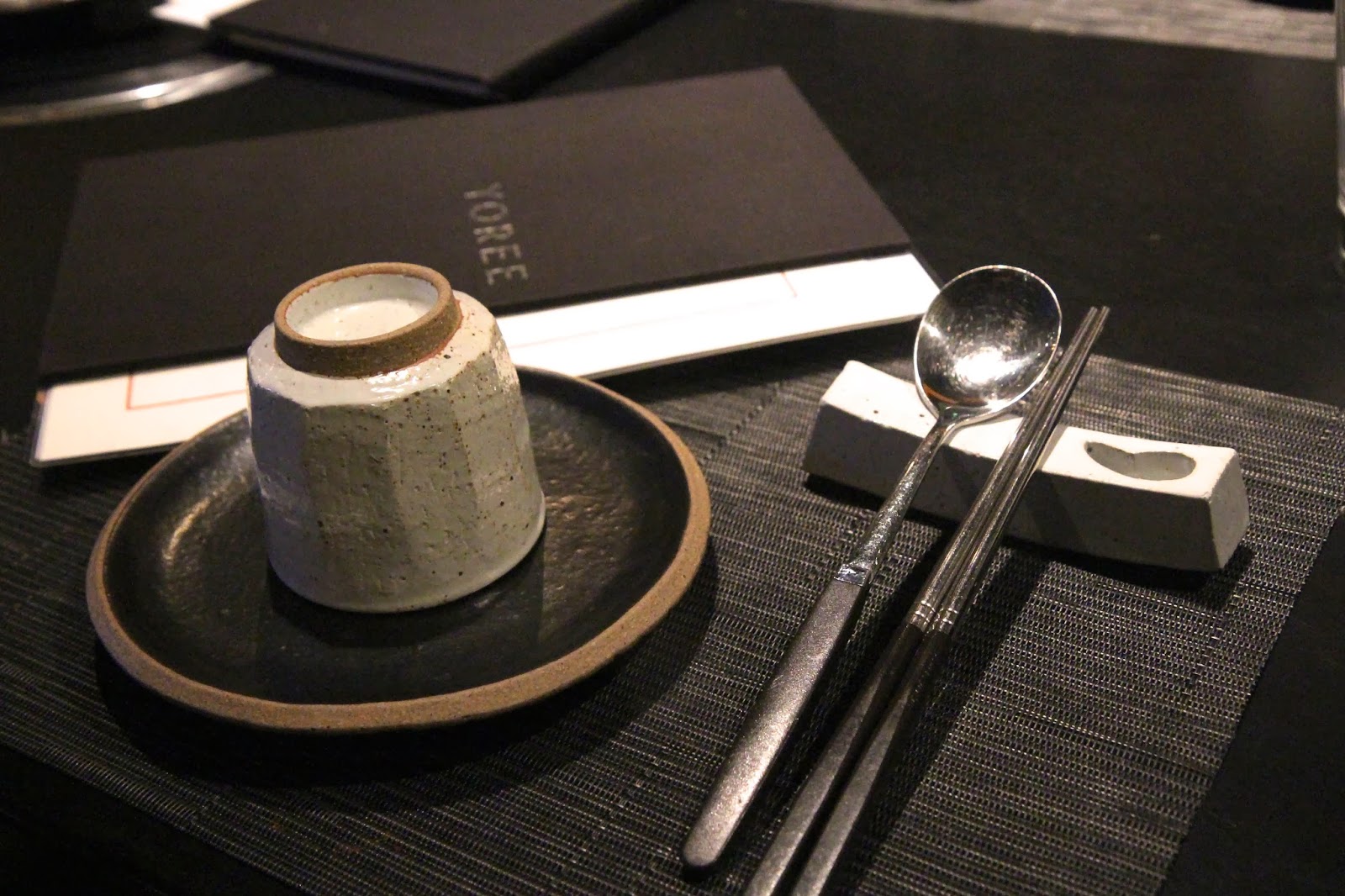 I have those same chopsticks at home. 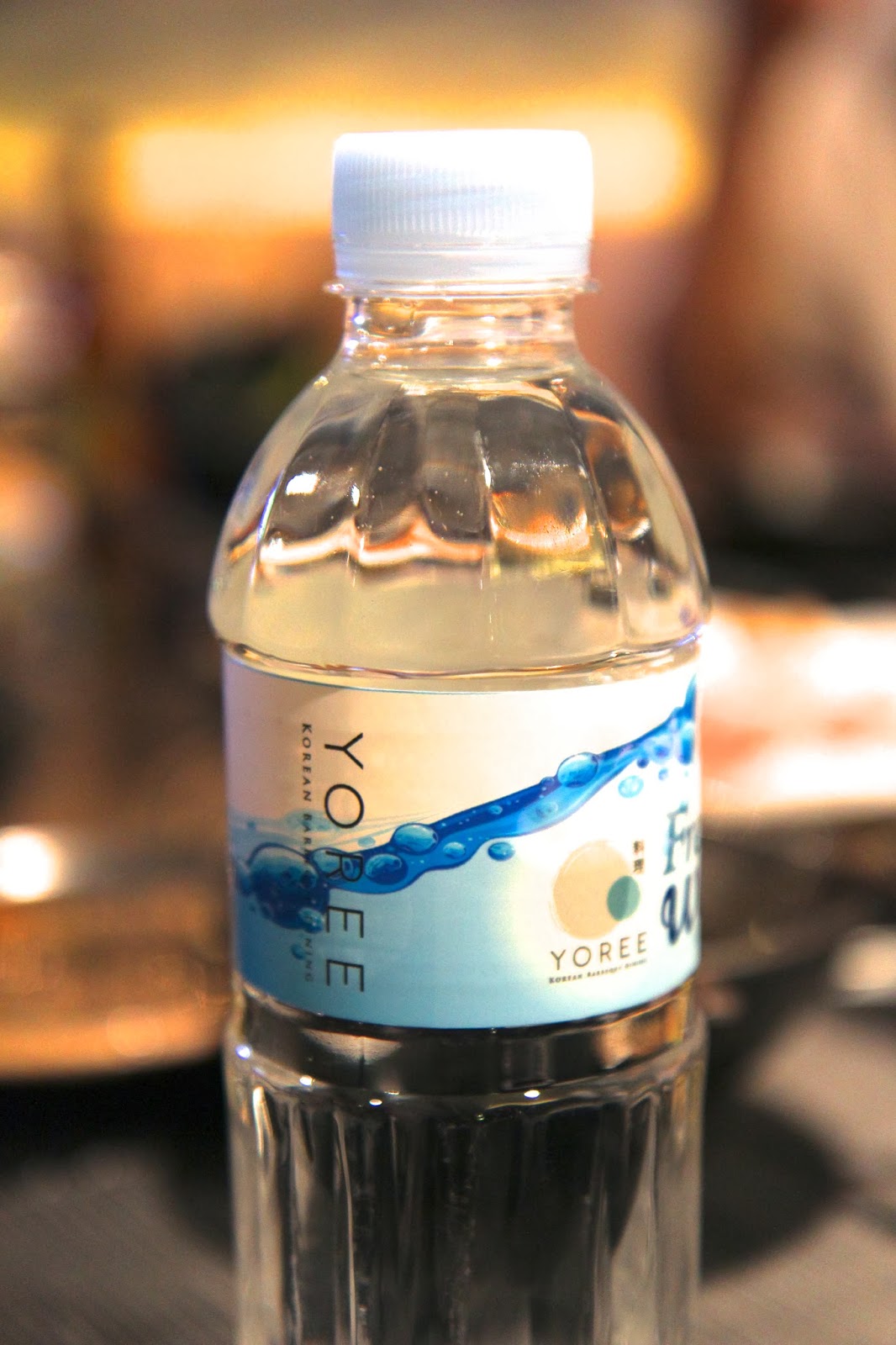 Their own bottled water--now that's class! 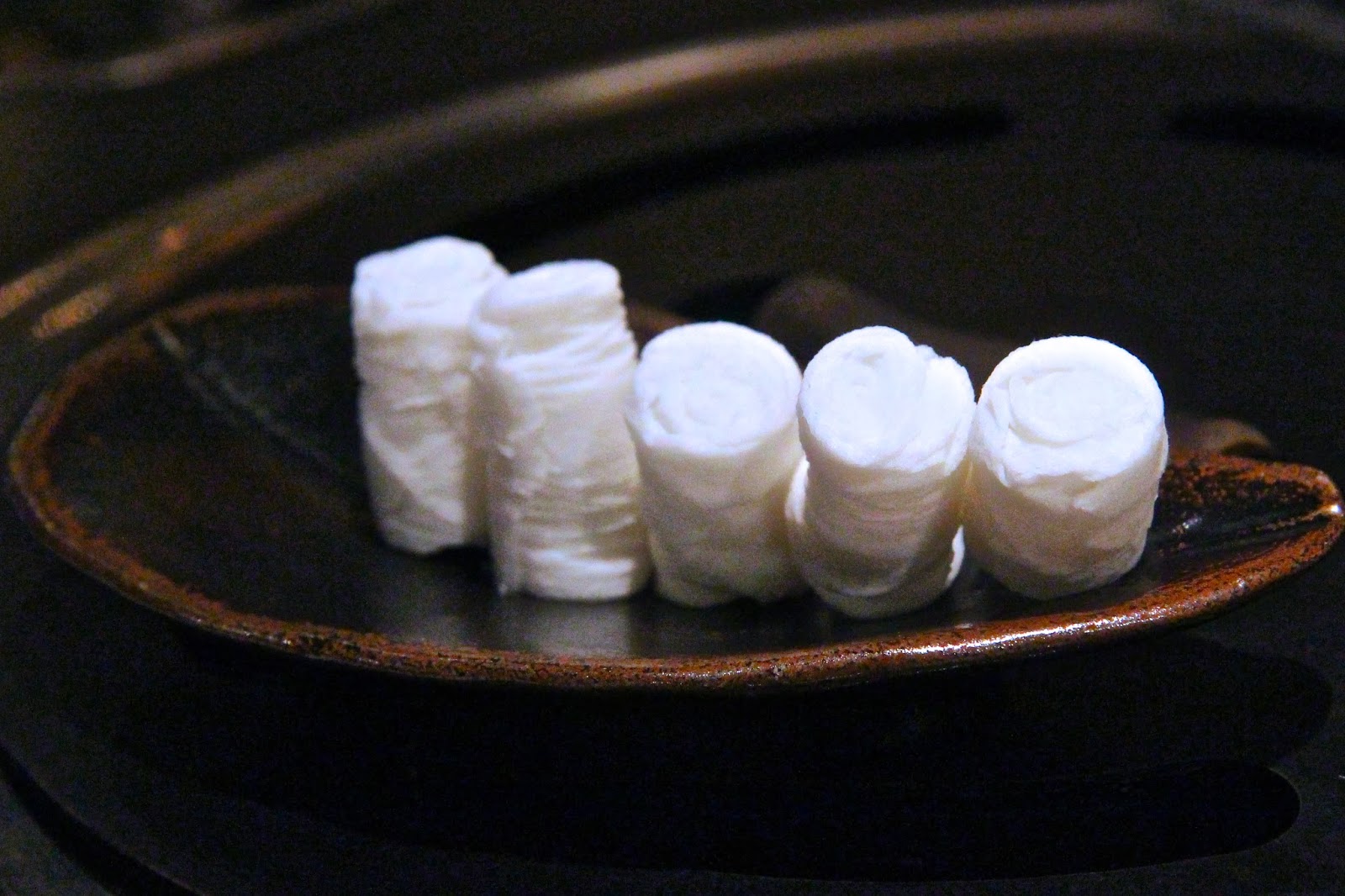 Regardless, the food was awesome.  We ordered the Course Dinner, a set with various items also available à la carte.  From start to finish, every dish was artfully and thoughtfully presented, which usually makes me skeptical, more style than substance--as is the case in many Gangnam restaurants (see for example 3.006 Beef Sukiyaki)--but the food here was also artfully and thoughtfully prepared.  Not "localized" per se, I'd characterize it more as "globalized" in the sense that obvious care was taken to balance out the flavors, nothing over the top, everything just sweet and salty and spicy enough to please anyone anywhere.  Not only far and away the best Korean food that I've experienced in the Philippines thus far, I'd go back again even if this were in Korea. 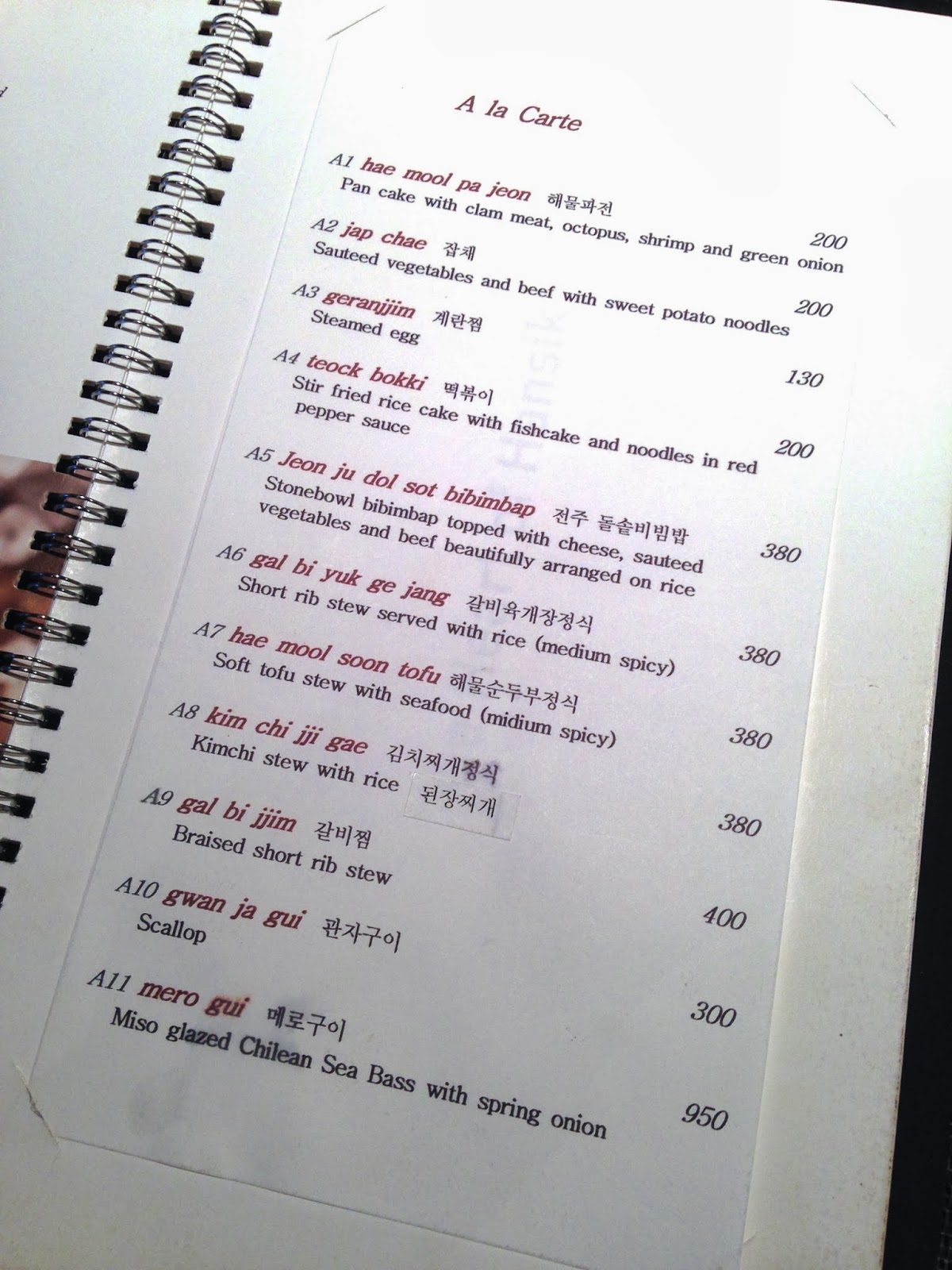 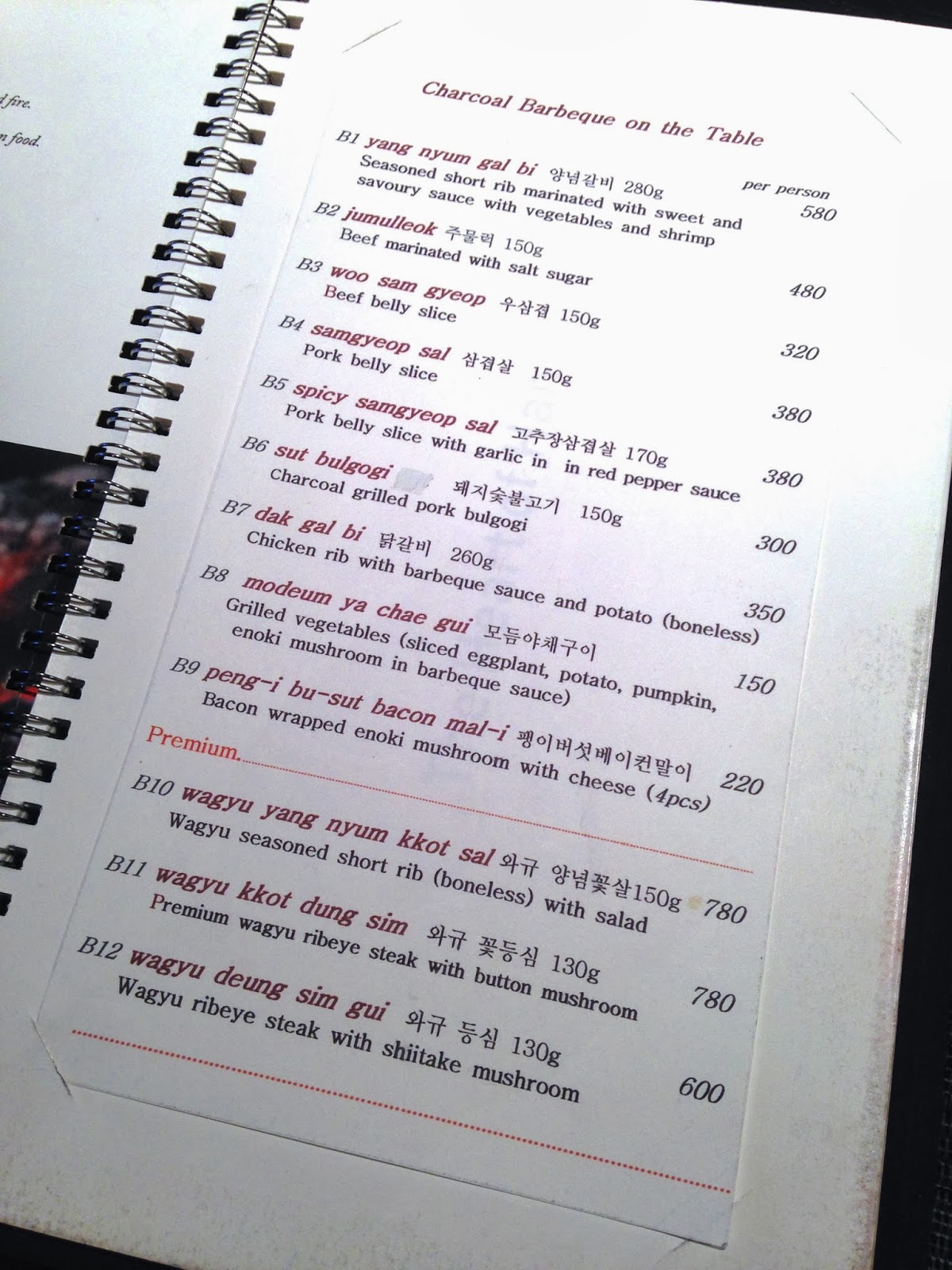 Prices, predictably, are higher across the board than at most Korean restaurants in the Philippines.  Main dishes start at close to 400 pesos, while premium wagyu cuts for the grill go up to 800 pesos for just 130 grams. 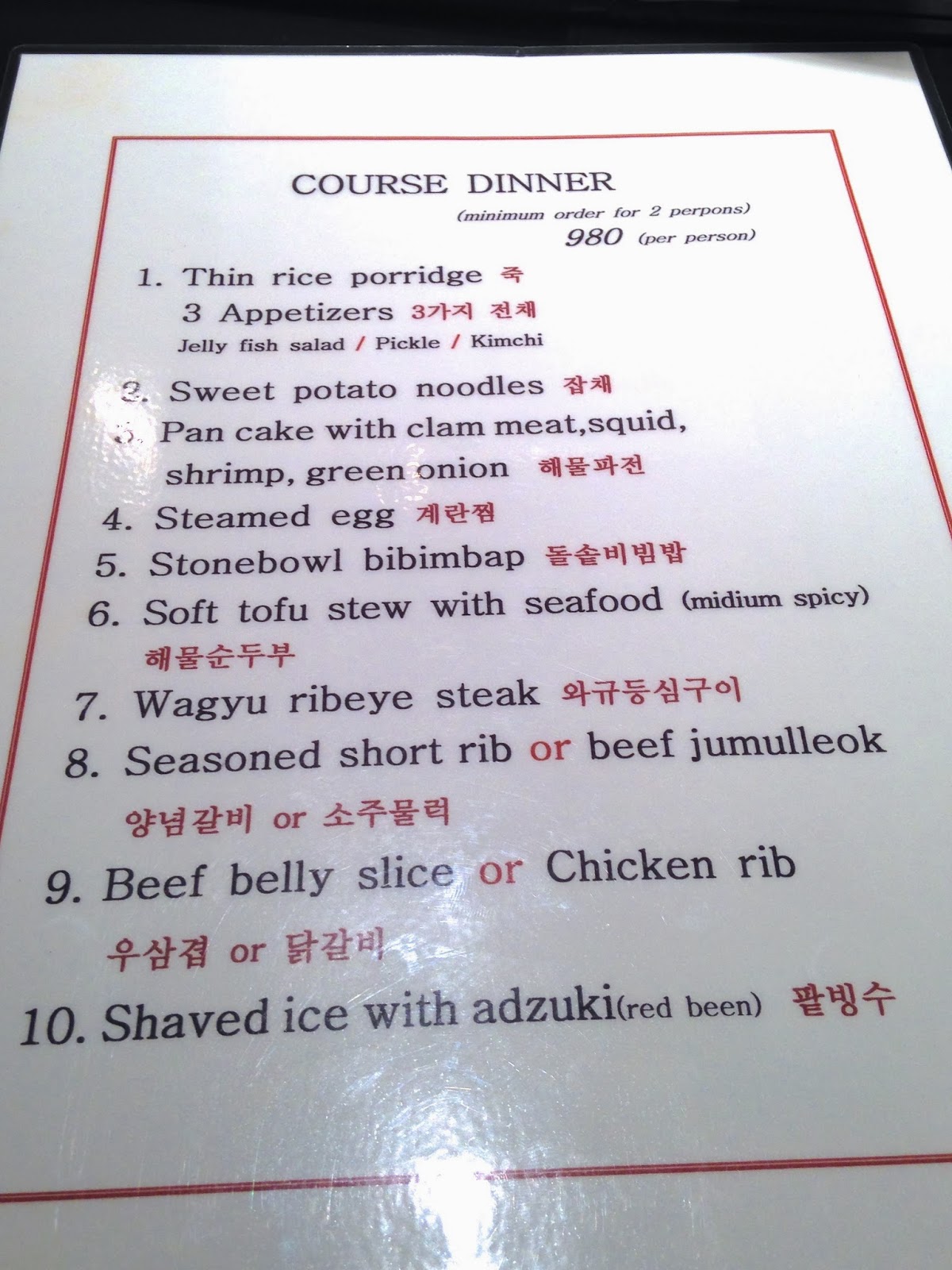 The one off-note to an otherwise carefully crafted image of posh were the cheaply produced and poorly written menus.

I've always maintained that the threshold problem with attempting to promote Korean food in other countries is the stubborn insistence on "keeping it real."  And I'm not suggesting that the cuisine be dumbed down or bastardized beyond recognition, the way that imports to Korea are treated--ironically, Koreans love the phrase "When in Rome...," even though Koreans eat Korean food when they're in Rome.  Anyway, the preparations can still be 100% authentic without being so intense/extreme: the doenjang doesn't have to be so stinky, the gochujang doesn't have to be so spicy, the kimchi doesn't have to be so fishy.  Understanding what mainstream tastes across the world are capable of appreciating, then skillfully/subtly adapting the menus and recipes accordingly, while still preserving the cuisine's essence, is how Thai and Mexican, for example, two of the most intense/extreme cuisines on the planet, have managed to be so internationally successful.  Yoree, this is the way to do it--keep it up. 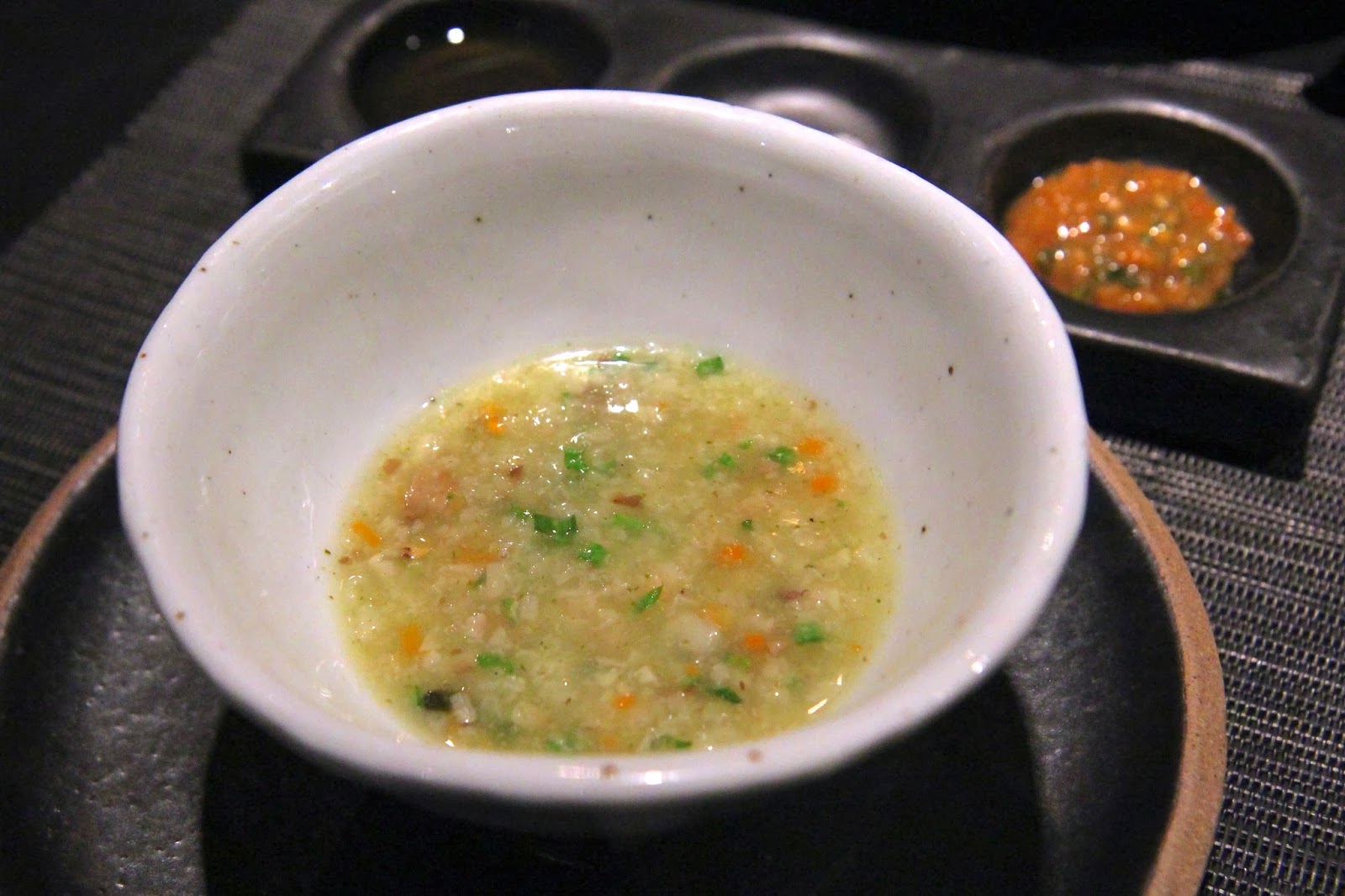 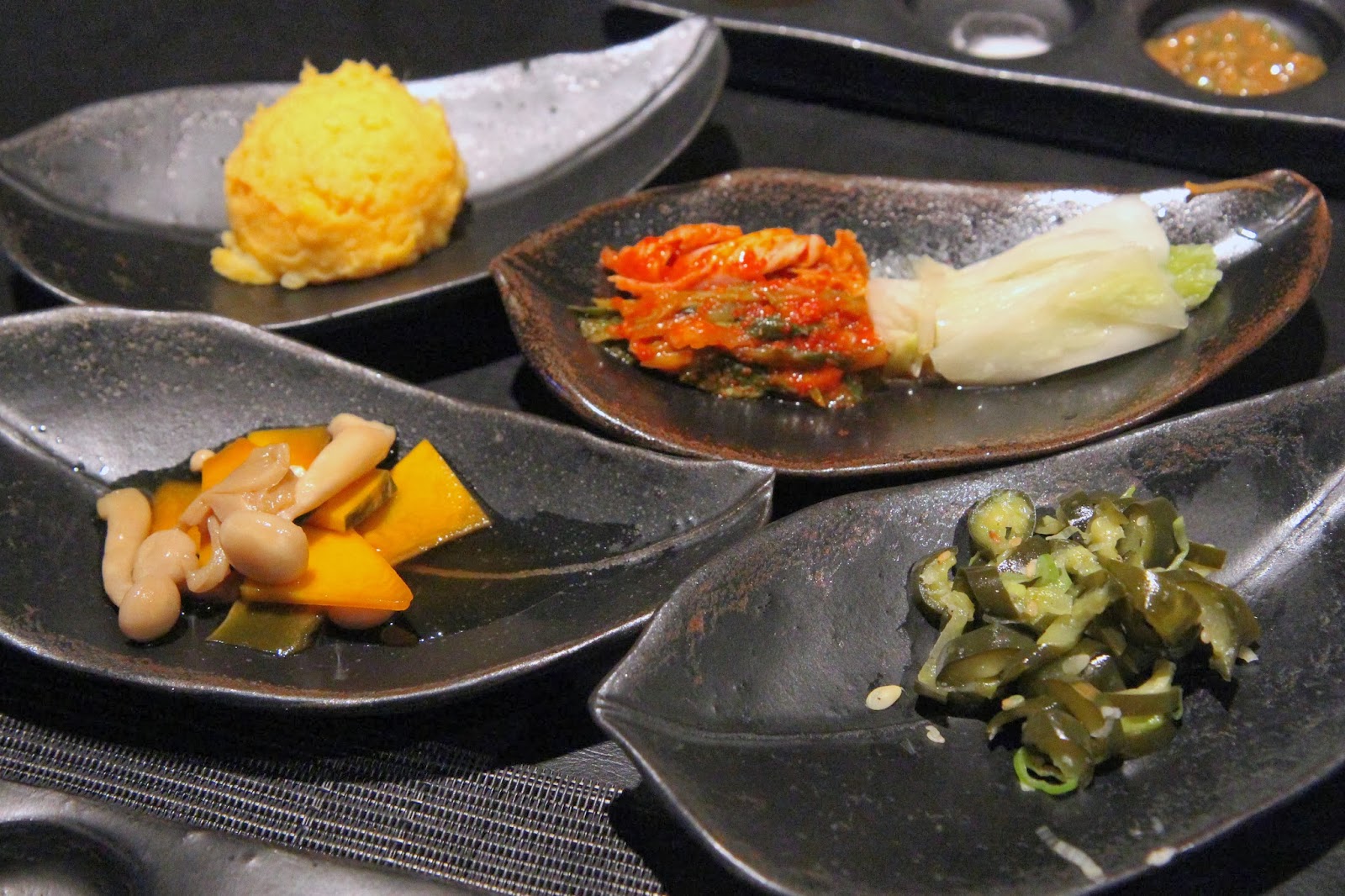 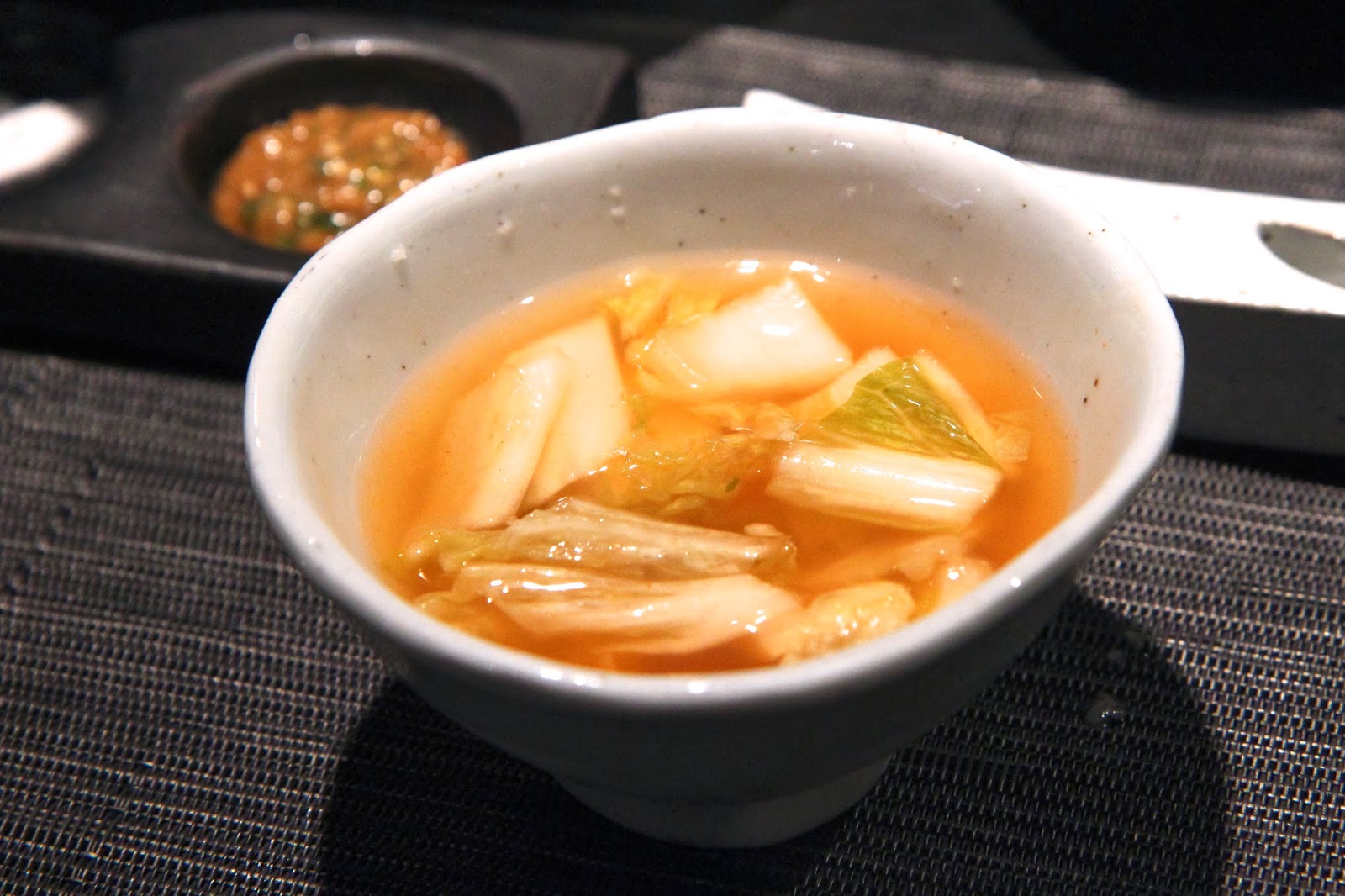 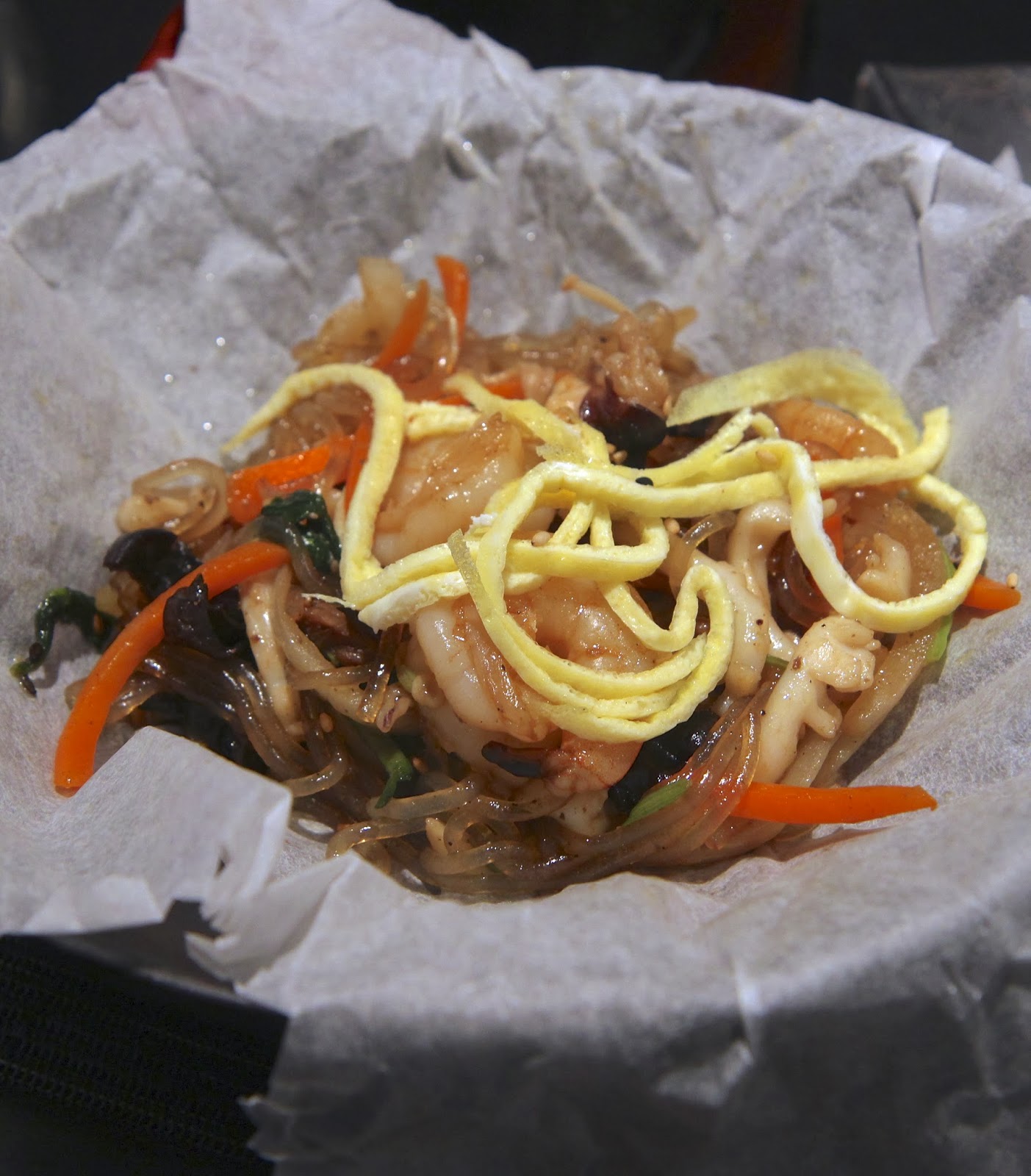 "Sweet potato noodles (japchae)" (4.0)--my favorite dish of the meal, even though I don't really like japchae in general that much, usually because it contains strips of dried out bits of pork or beef, but the inclusion of delicately sautéed and perfectly seasoned and exquisitely succulent shrimp here was an inspiration; this is how I will do japchae henceforth. 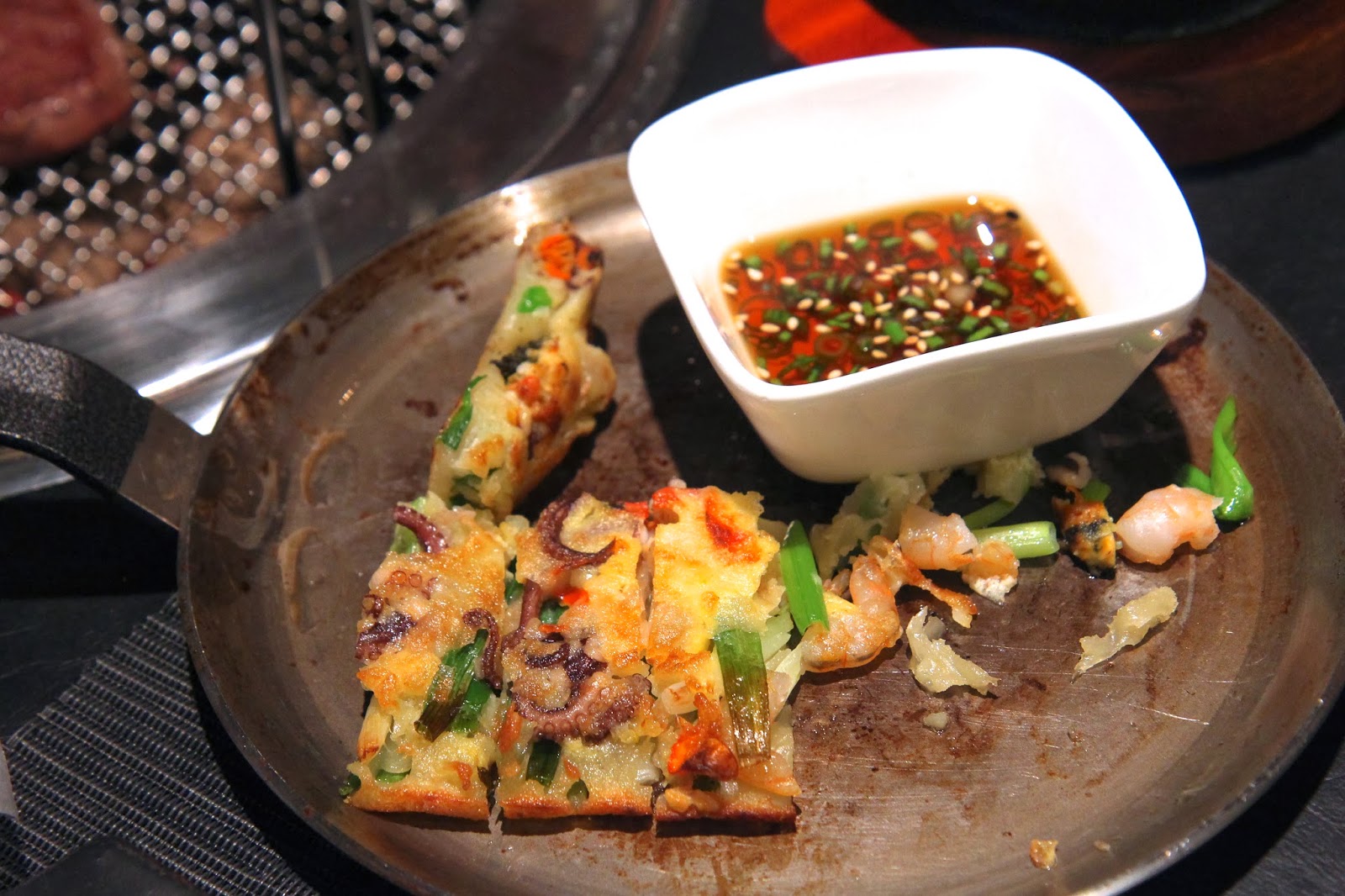 "Pancake with clam meat, squid, shrimp, green onion (haemul jeon)" (2.5)--taste aside, the crêpe pan over a low induction pad on the table kept the pancake nicely crisp to the very end. 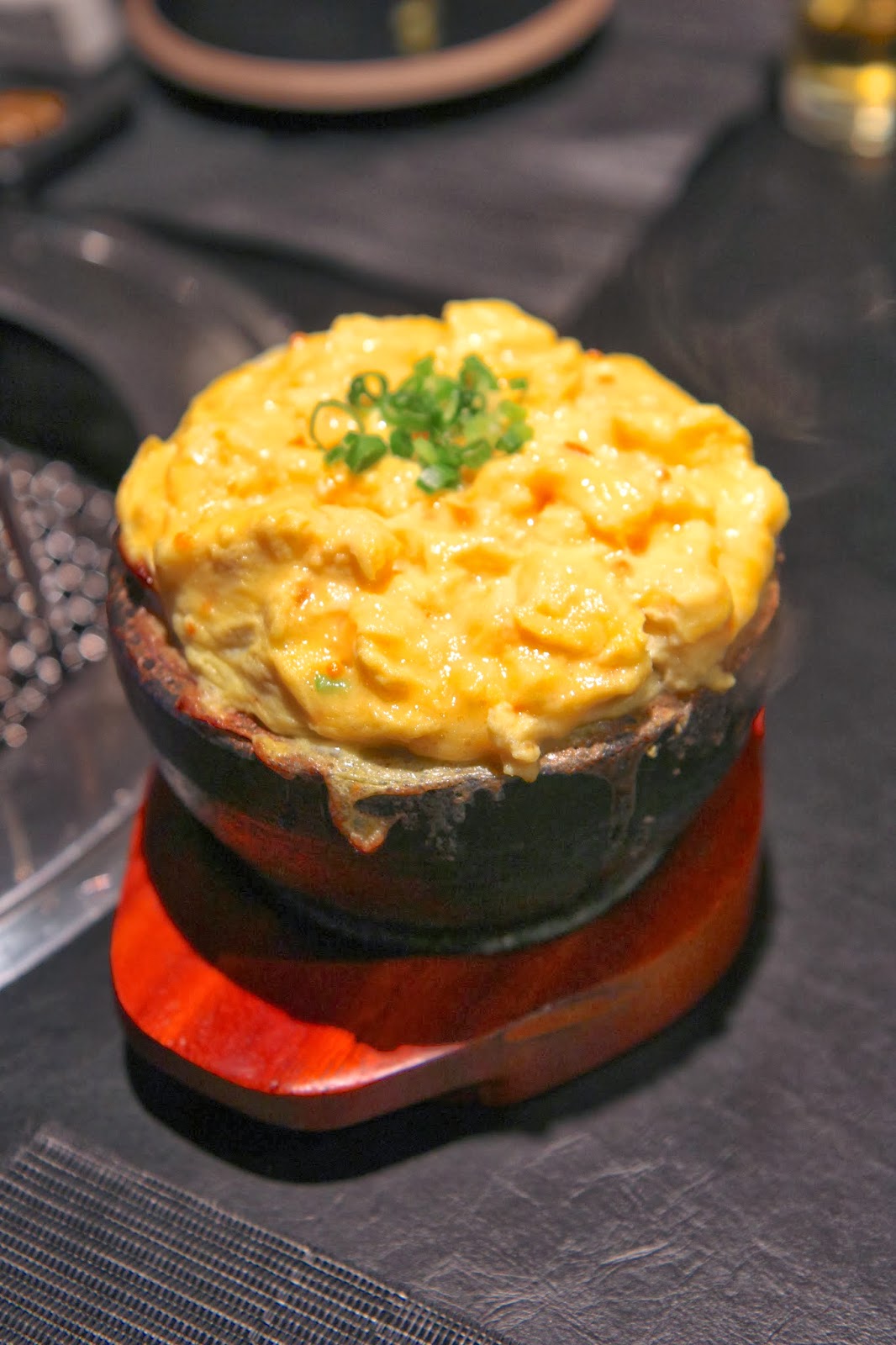 "Steamed egg (gyeran jjim)" (2.5)--taste aside, get a load of that presentation; I've never seen it done like this and can't imagine how they got the egg to rise so much. 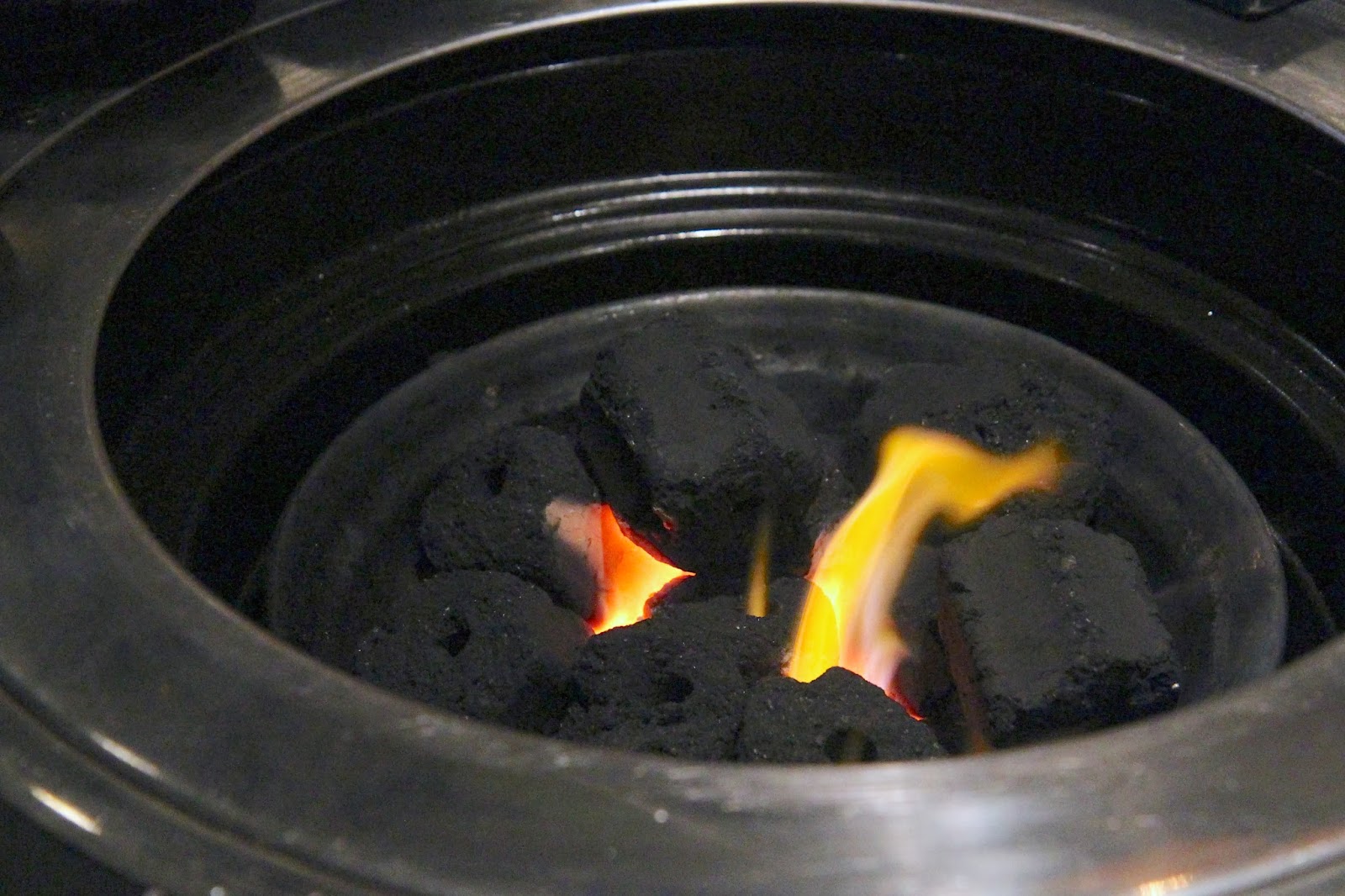 Actual charcoal, lit by gas underneath. 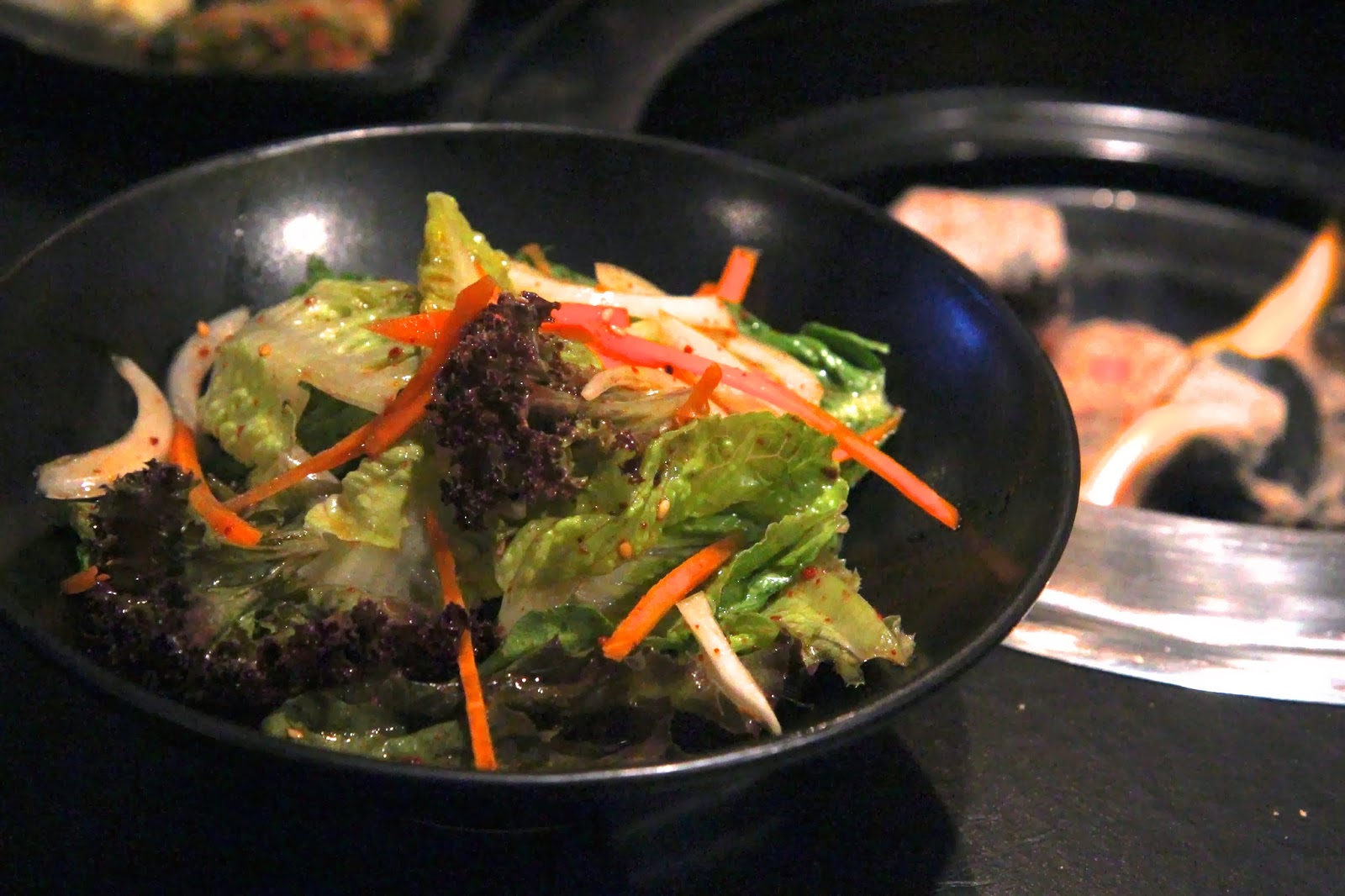 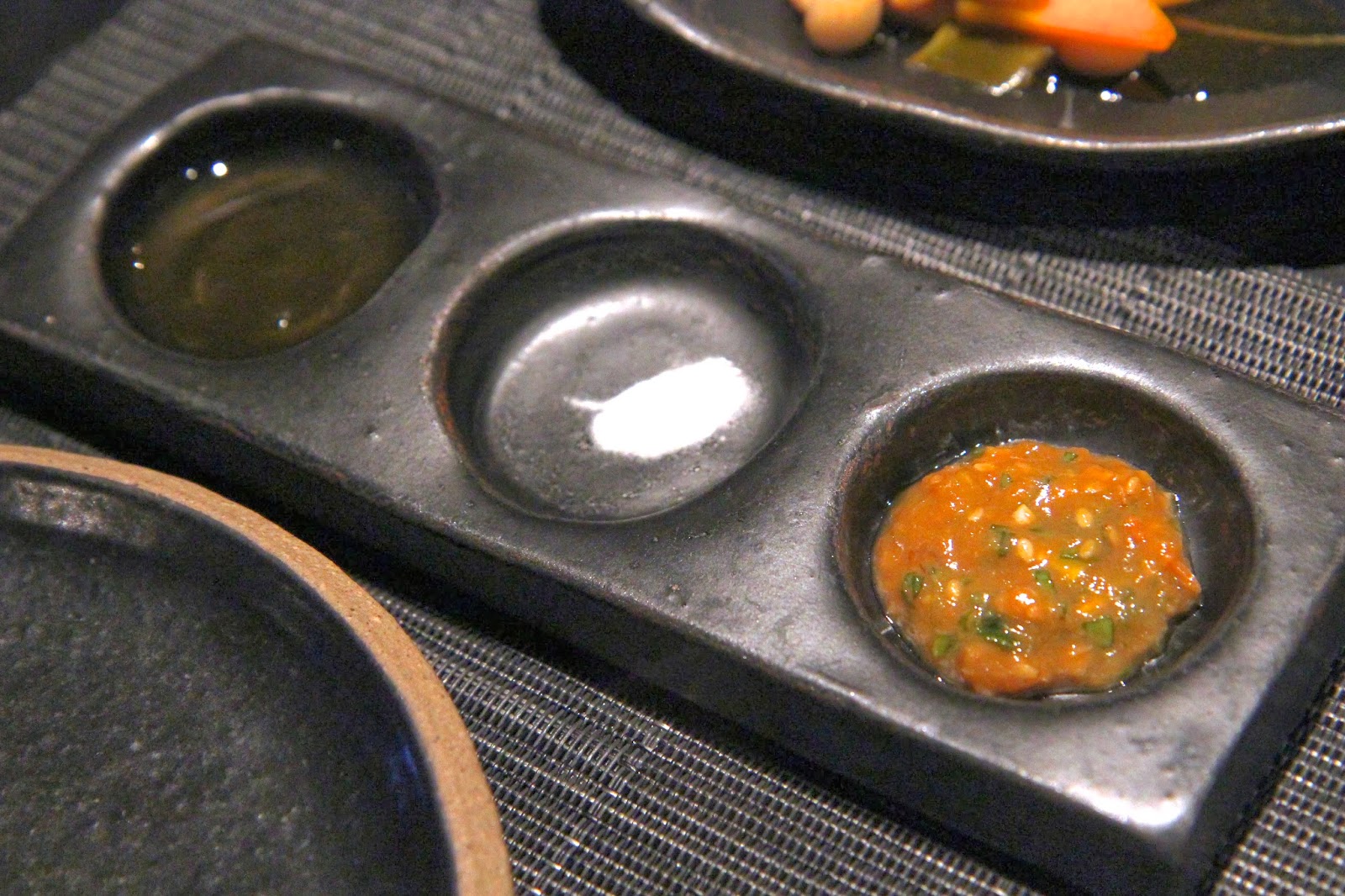 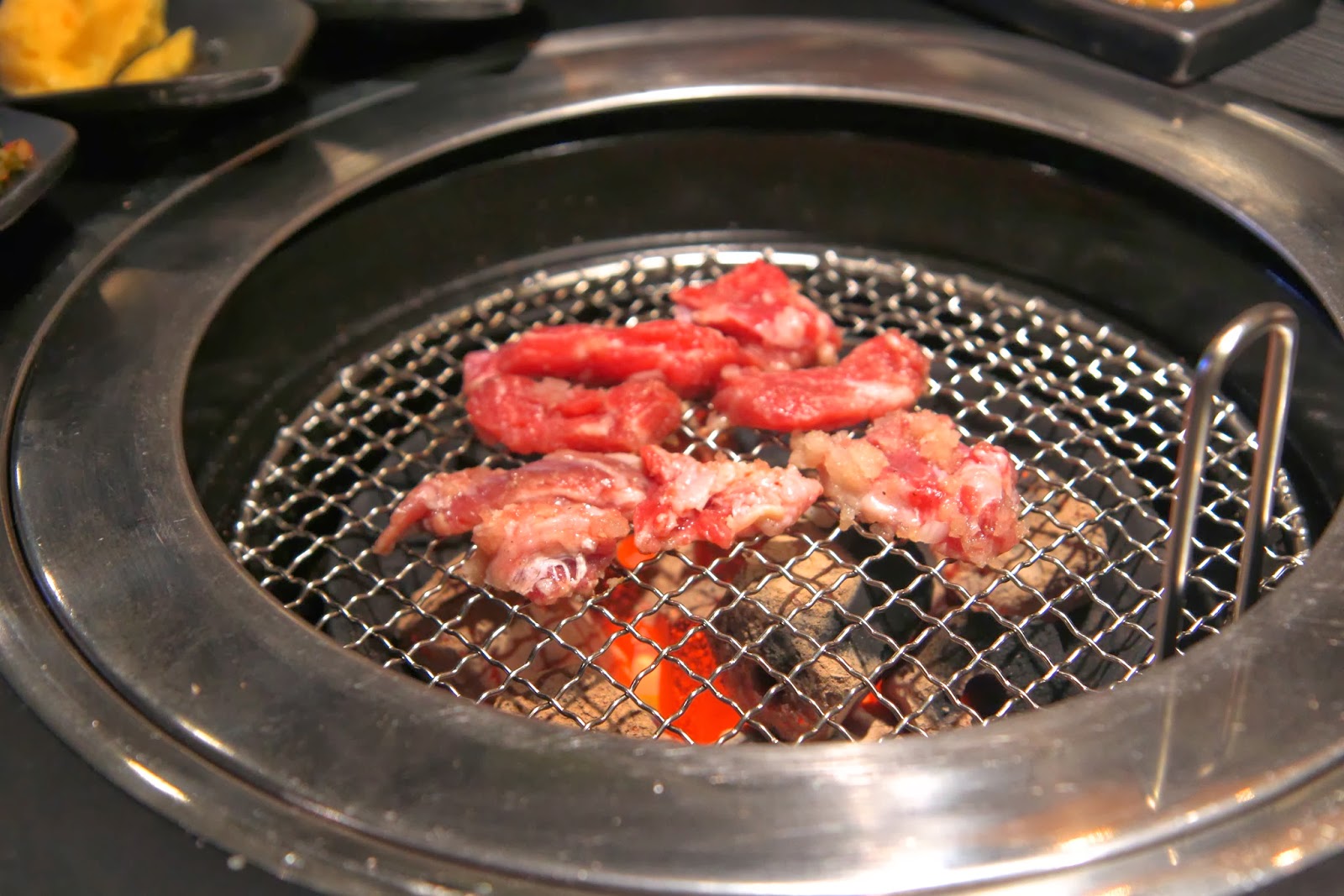 "Beef jumulleok" (2.5)--respectable marinade, but the beef itself was somewhat tough. 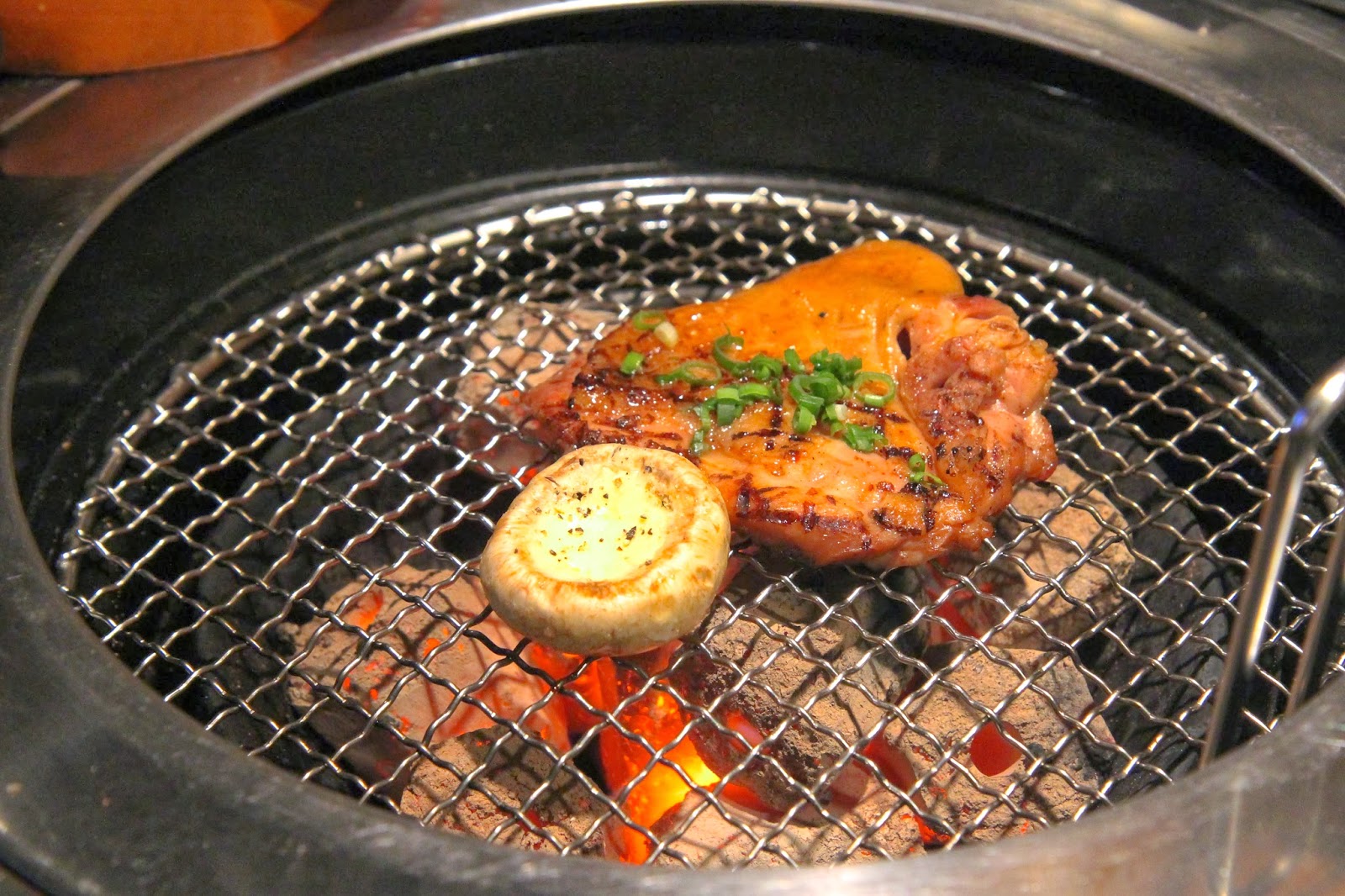 "Chicken rib (dak galbi)" (2.5)--not rib, of course, but thigh, commonly mistranslated due to the multiples meanings of "galbi" (see generally 1.081 Pork Galbi); and not at all like "dak galbi" in Korea (see generally 1.201 Dak Galbi); in fact, this kind of grilled chicken can pretty much only be found in Korean restaurants overseas. 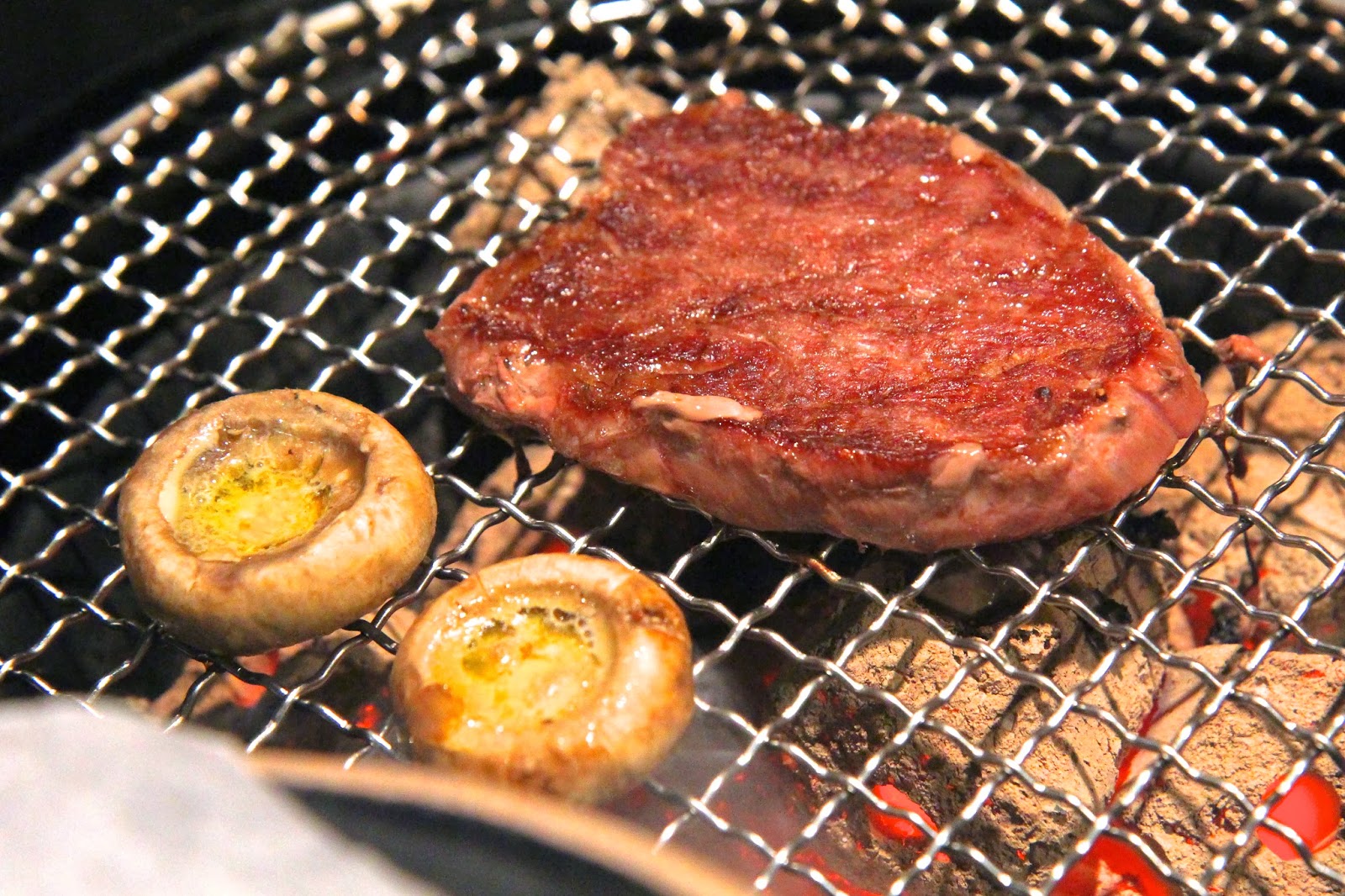 "Wagyu ribeye steak" (1.5)--despite being listed as the first meat item on the menu, and though unmarinated meats should always be served before marinated meats, this steak came last; 0 for 2, I'm very unimpressed by the wagyu here (see previously 5.022 Wagyu Course), which is dry and flavorless, at least in Korean restaurants. 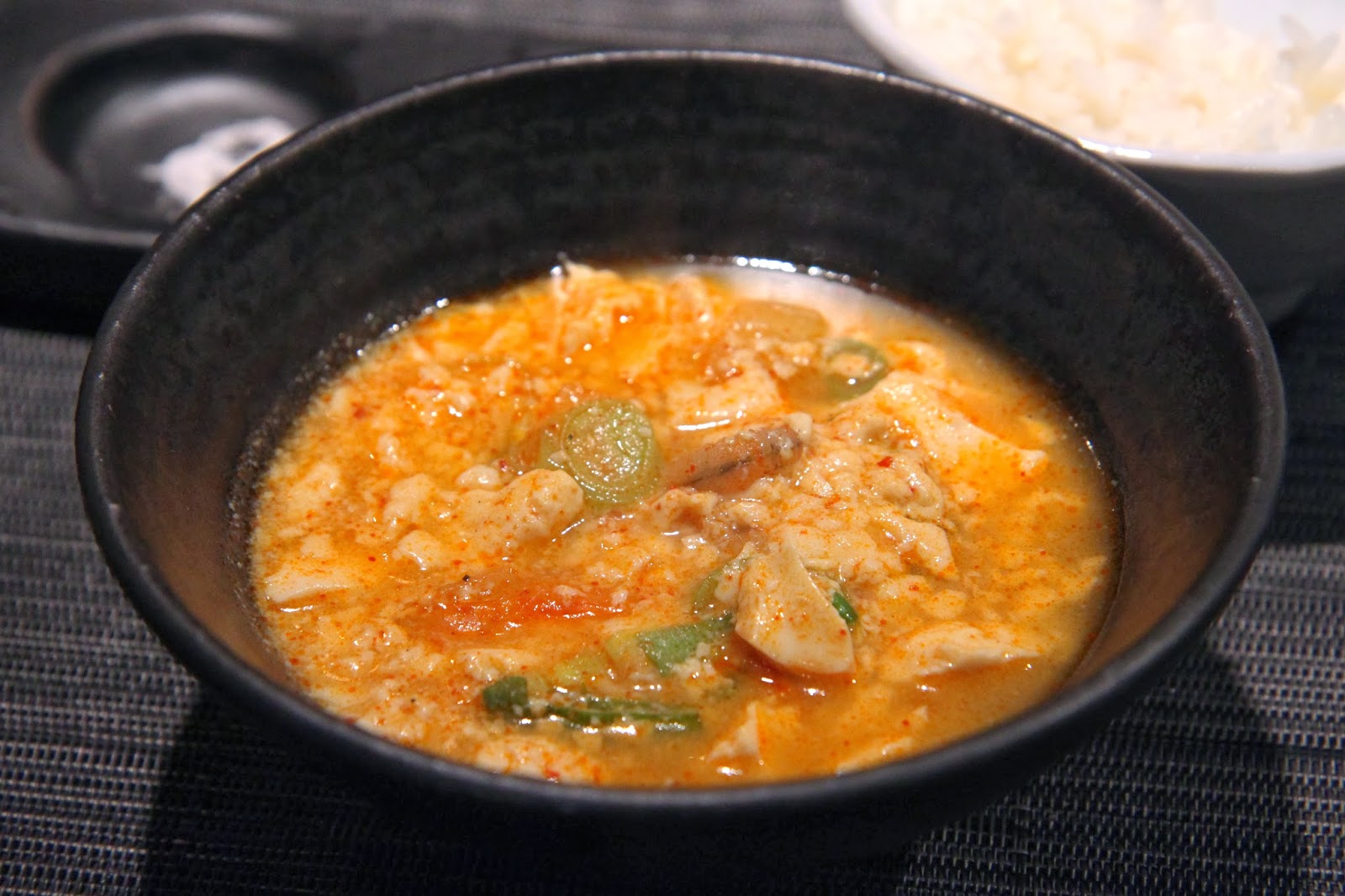 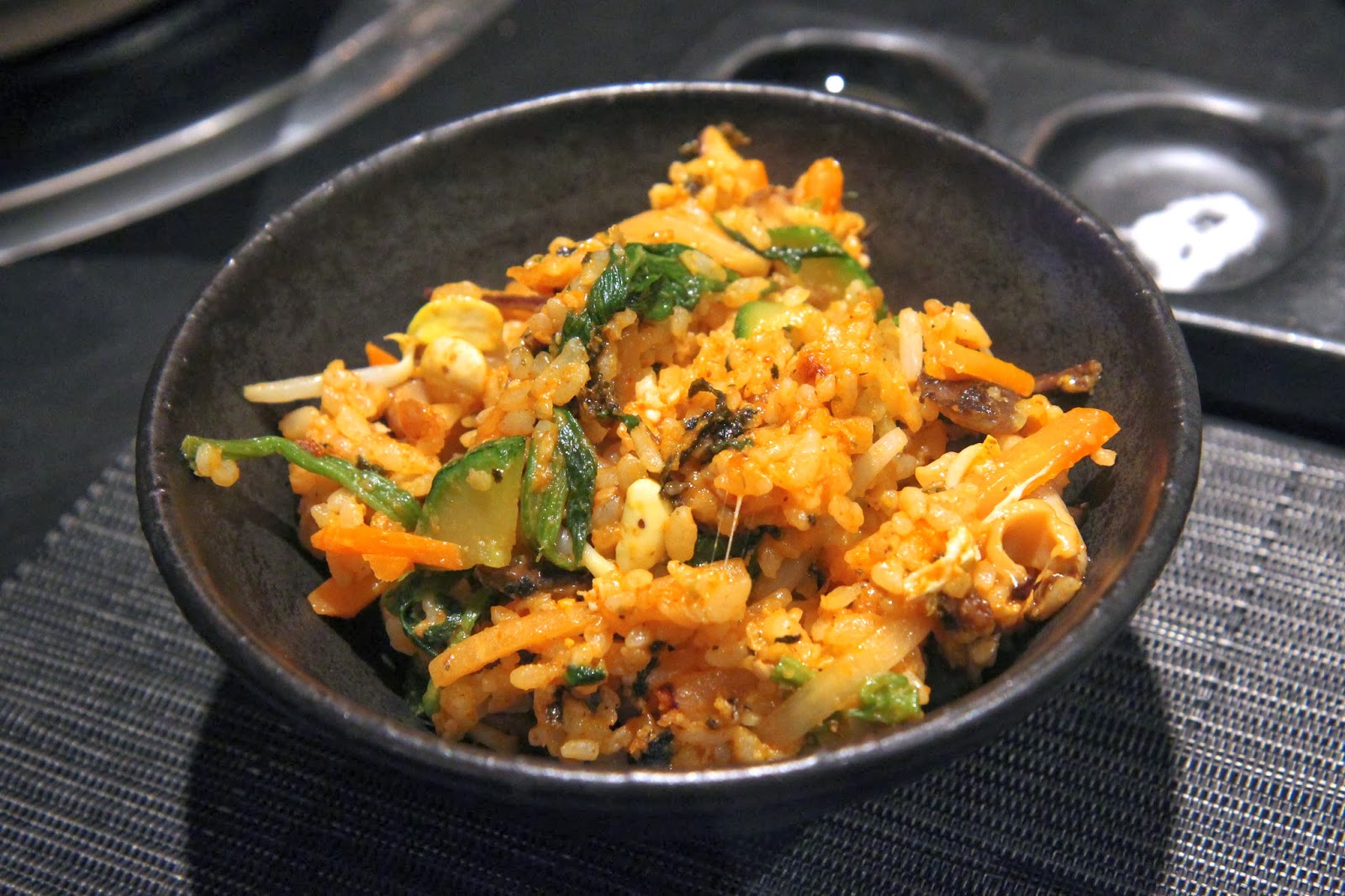 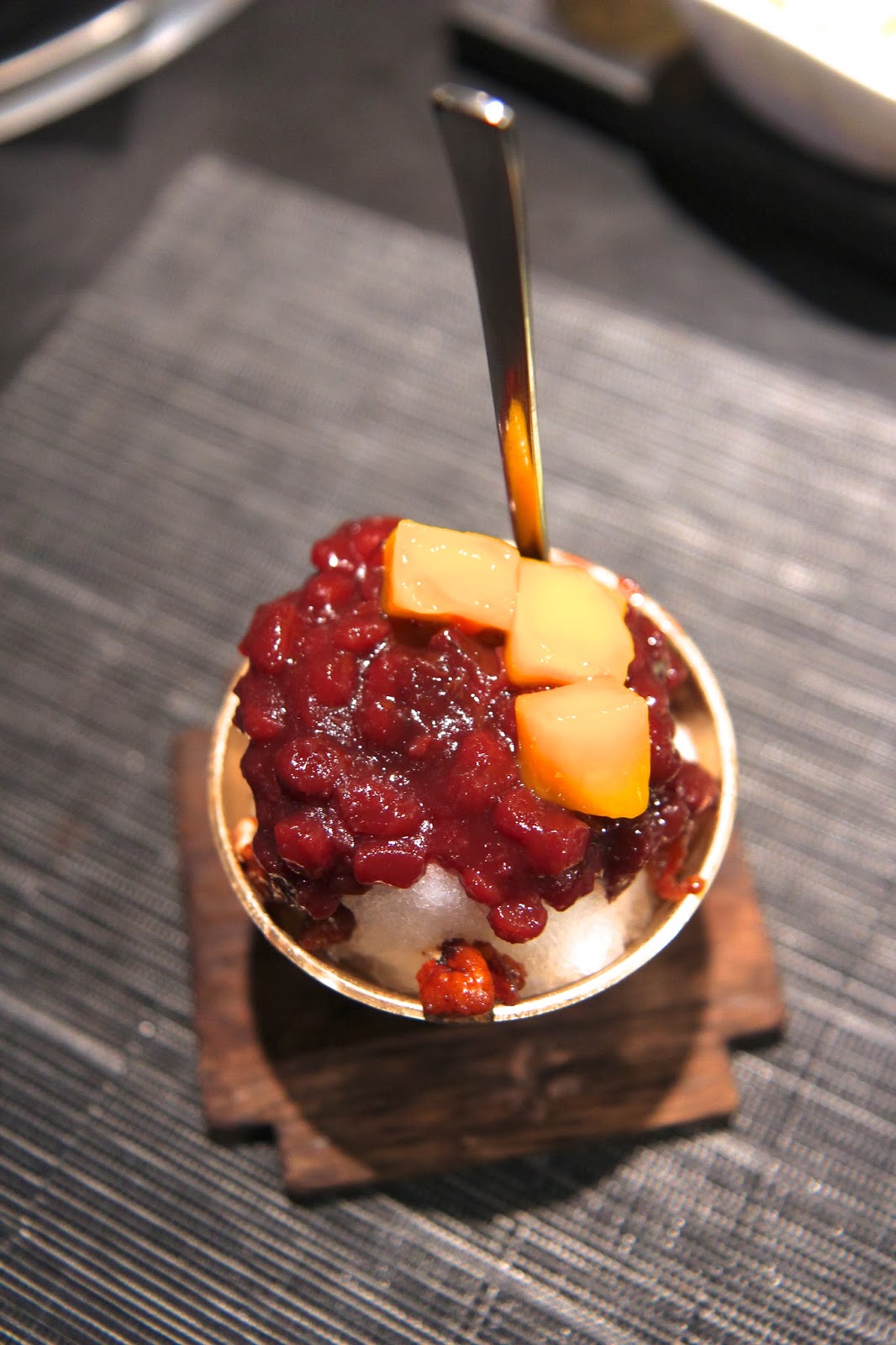 "Shaved ice with adzuki (patbingsu)"--I'll admit that it looks good.