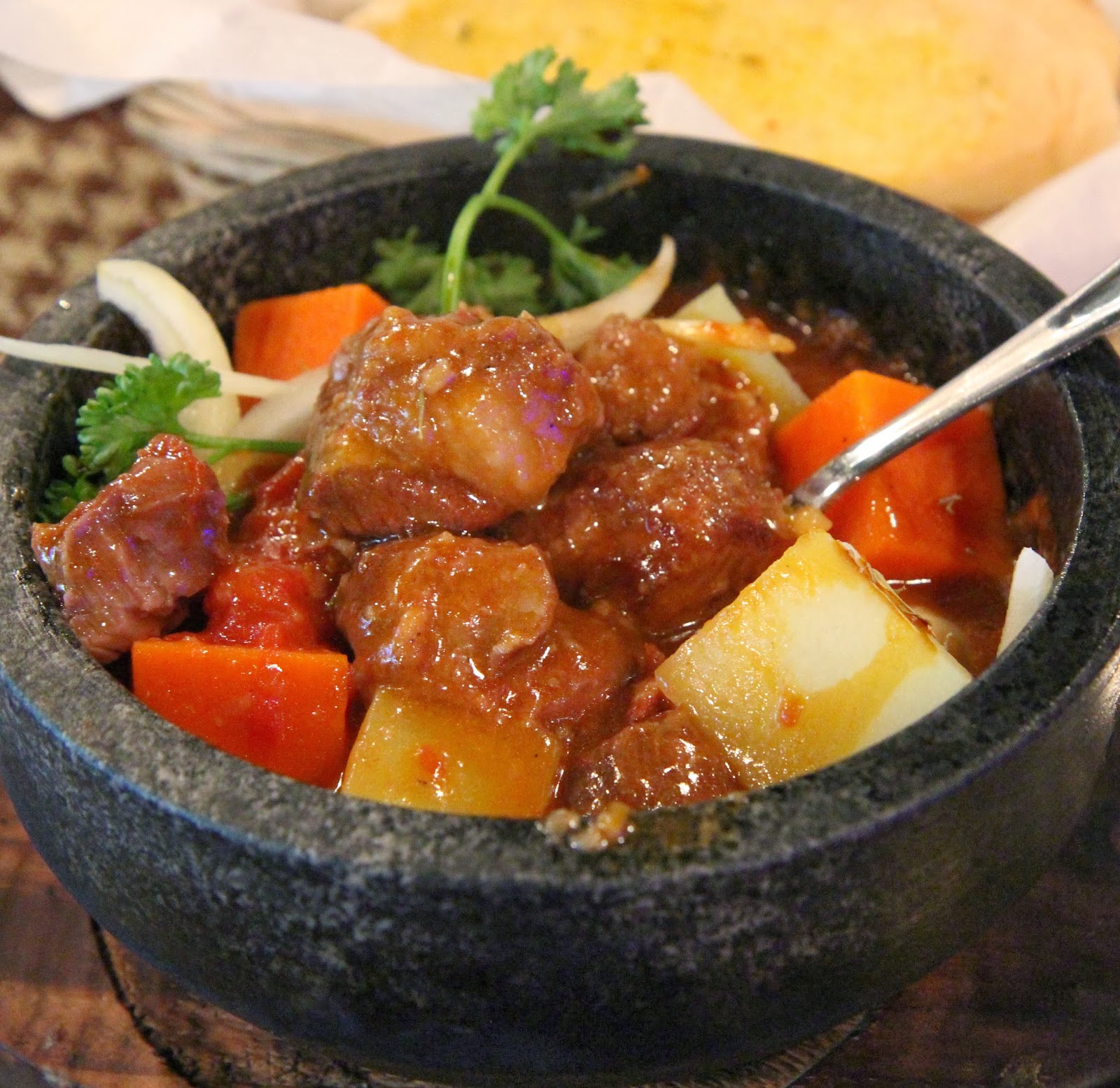 
Molly Malone's Irish Bar is a western pub/restaurant.  Located in Malate, on the first floor of Tune Hotel.  The menu offers typical western fare, like burgers and fish & chips.  But no Guinness--on the menu but rarely available--so it can't really be considered Irish [addendum: see Gustaf's comment below].  For reasons yet to be determined [addendum: see James's comment below], a favorite hangout among people in my division; in fact, it was the first place that they took me to for drinks when I got here.  Current TripAdvisor ranking: 98 of 731 restaurants in Manila. 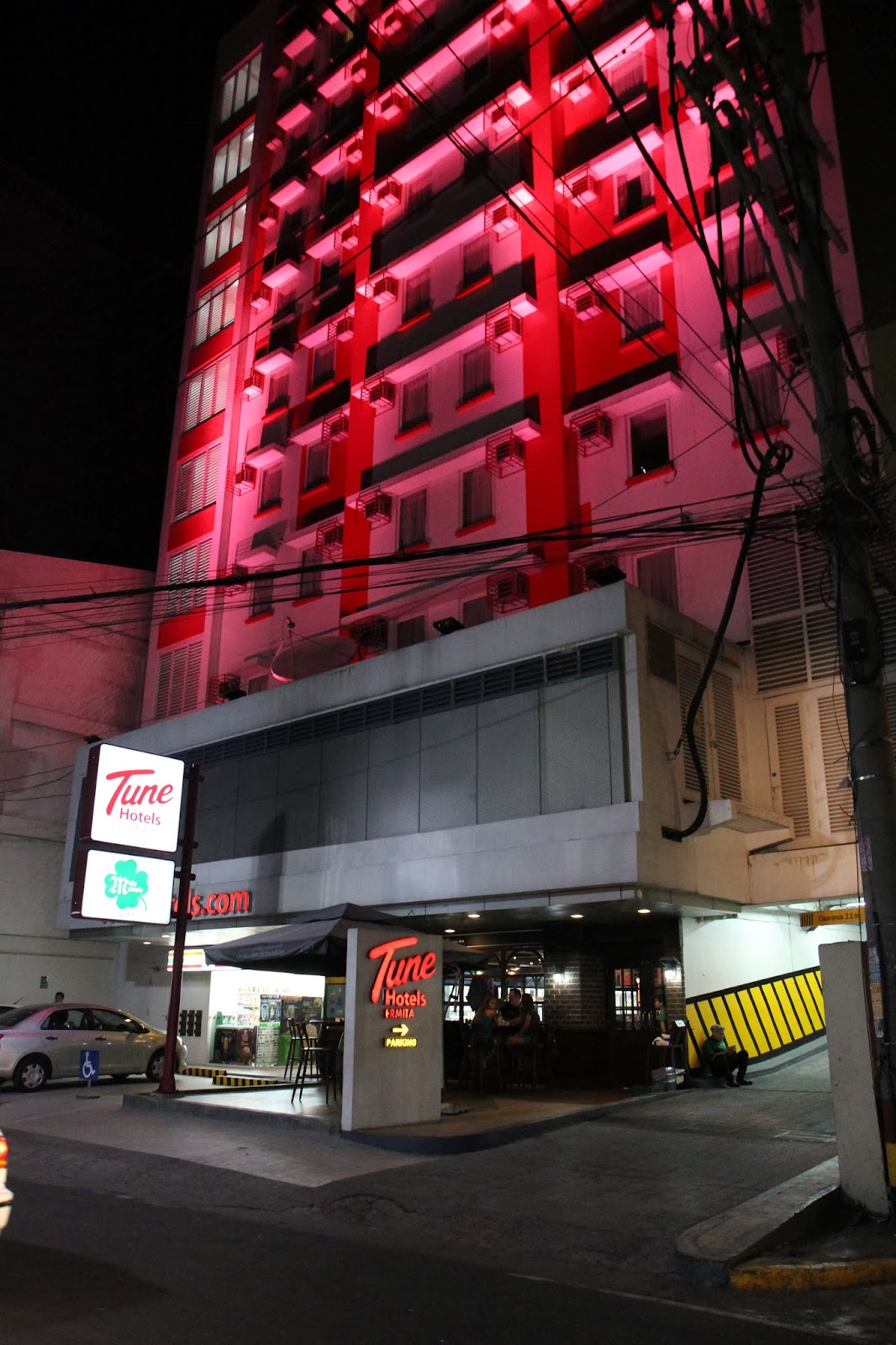 Appropriately, the red-lit hotel is surrounded by drinking establishments from which certain service employees are available for takeout. 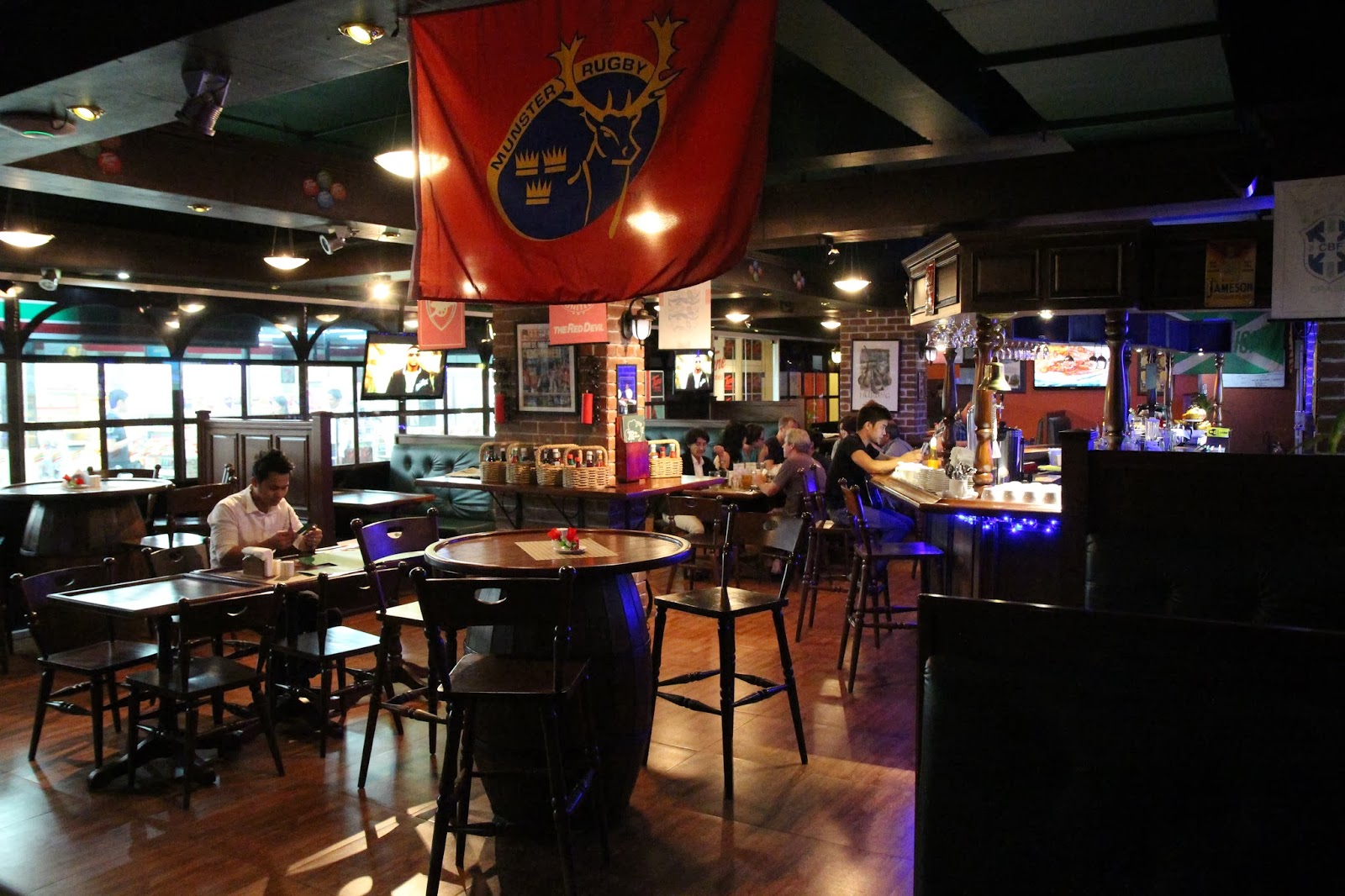 Not that I put much weight on TripAdvisor, but the aforementioned Top-100 ranking seems kinda high, as the place was nearly empty both times that I've been there.

The lamb stew was--I dunno what.  First of all, it didn't seem very Irish: chunks of lamb, potato, carrot, and onion, braised in a spicy tomato sauce, served in what appeared to be an actual Korean BBB dolsot, accompanied by bright yellow toasted French bread, sorta buttery and garlicky.  Otherwise, it was okay.  Then again, I only have one experience with the dish, made by me from a recipe in a generic cookbook (see generally 3.345 Stew), so I have no idea.  Secondly, it took nearly 45 minutes to prepare, or to be served, kinda ruining the meals for everyone else, who all insisted on waiting until the entire table was set, by which time the stew came out piping hot and the rest had turned cold.  And finally, maybe, maybe not, something in the pot was contaminated, because I was sick by the time that I got home.  Benefit of the doubt, I'll rate the dish assuming that it wasn't responsible for poisoning me, which would warrant an automatic 0.0 (see for example 4.304 Mixed Grill). 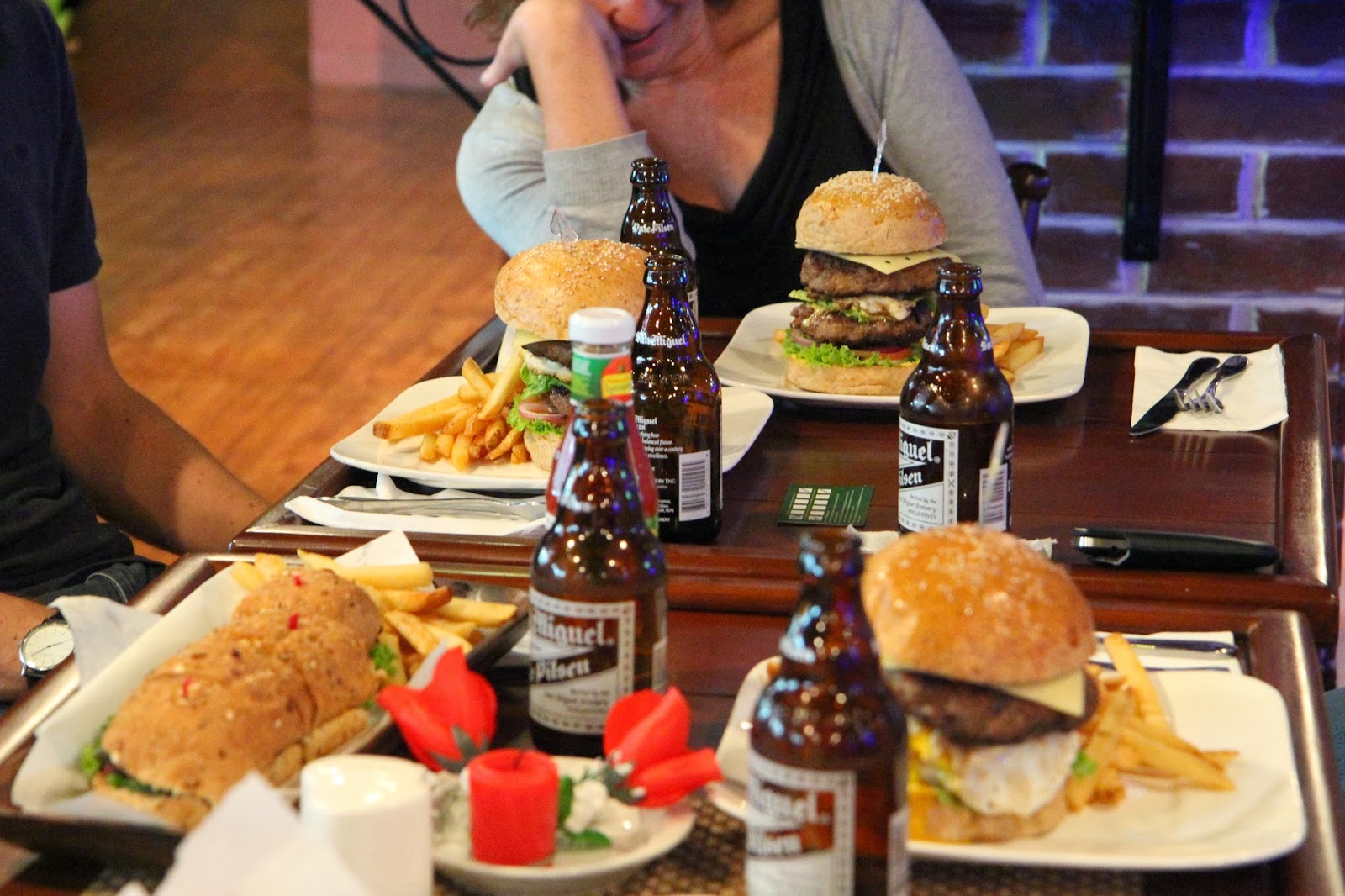 Part of the attraction to this place, I suppose, would be the extreme burgers, similar to those "bypass" burgers discussed in a recent post (see generally 5.031 Baconater Mushroom Melt). 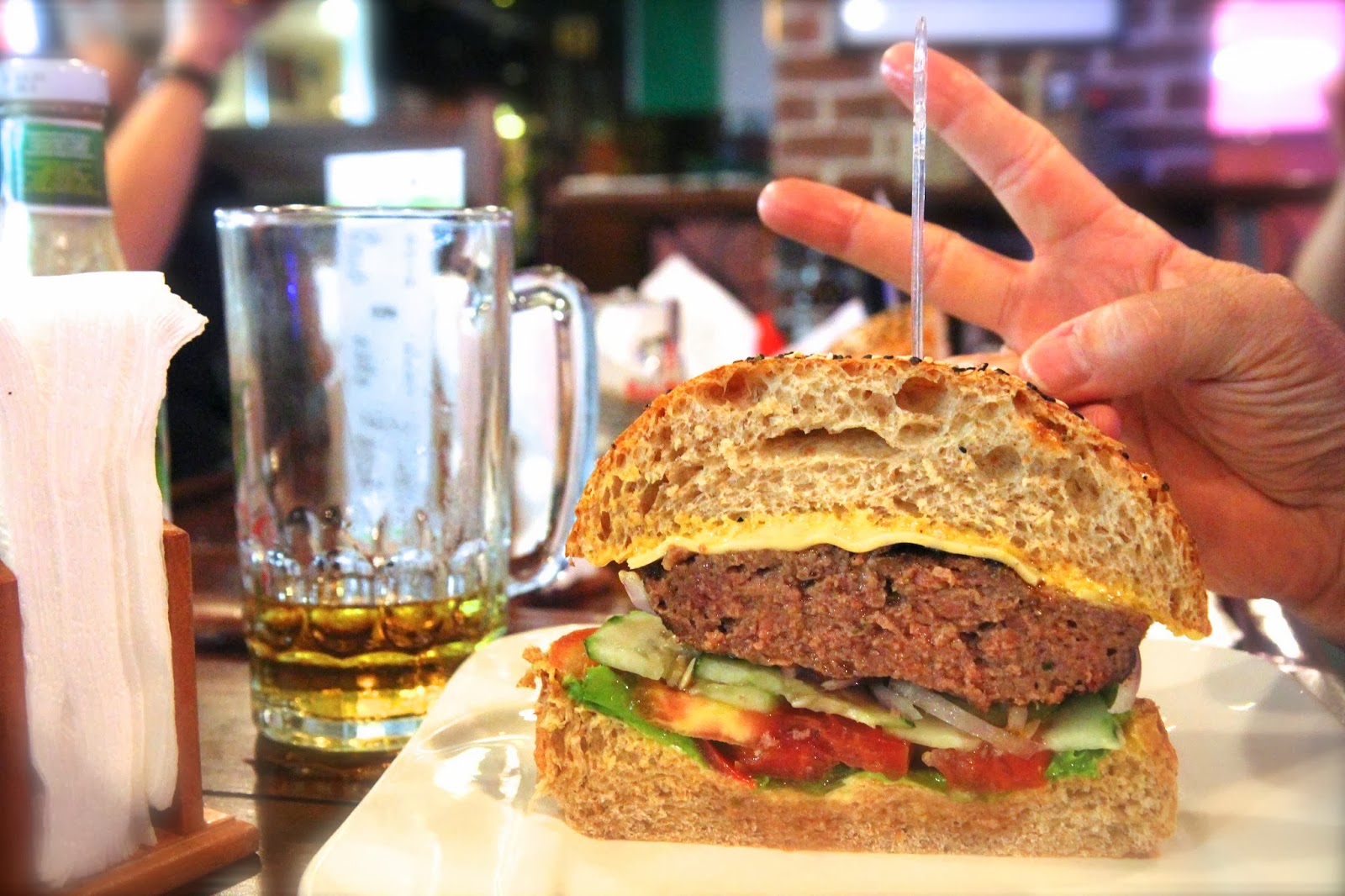 For example, the Smashing Pounder--the name presumably in reference to the pound of meat that goes into it, and the smashing required for anyone without a detachable mandible; despite the beer mug placed alongside for scale, the photo unfortunately fails to capture the enormity of this burger as seen in person. 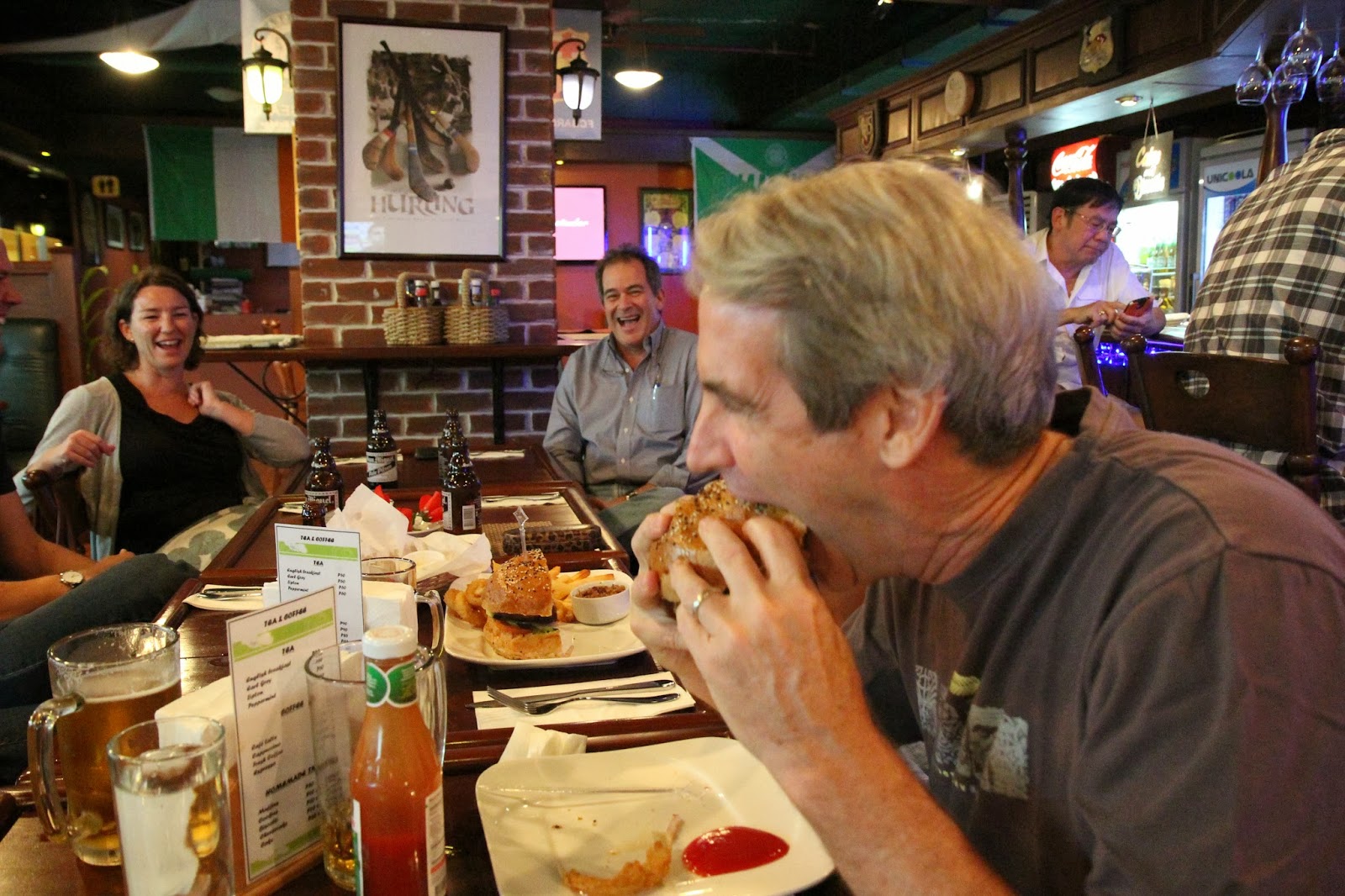 
To clarify, despite what I may have implied in the above-referenced post, I'm not against burgers or fast food or even junk food or ridiculously big portions per se.  Obviously, I eat such food myself, and even feed it to my kids, on occasion.  It can be okay, within controlled context.  James, the guy pictured stuffing his face with the Smashing Pounder, exercises regularly and is in top shape, and usually eats healthy--he even packs healthful meals for lunch from home, lovingly prepared by his wife Karla--so, now and then, he can handle a big burger; in fact, this time, he split the burger with Karla, who's the leanest and meanest of us all.  And presumably, a made-to-order burger in a full service restaurant would have less, if any, chemical crap--like preservatives, anti-foaming agents, processed cheese/sauce, etc.--than found in mass-produced fast food burgers.  What I'm against is the glorification of gluttony in mass media and pop culture, as well as the marketing and promotion of harmful products to vulnerable populations.