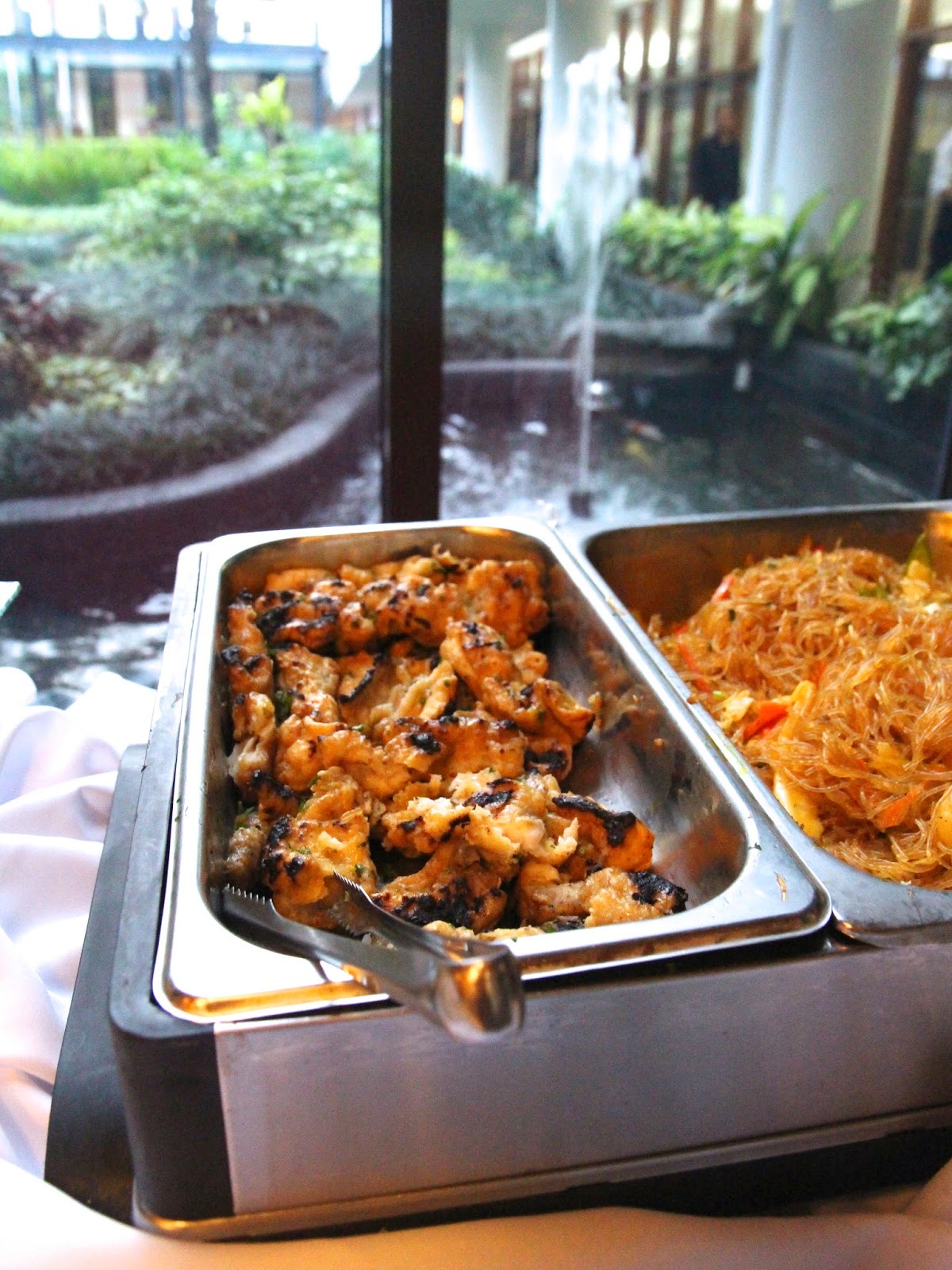 -Middle-Eastern-
Not What I'd Ordered

in the Conference Hall Lower Lounge (WHO WPRO)

with various members of WHO WPRO and attendees of the Consultation on Overweight, Obesity, Diabetes, and Law


At last, the Consultation on Overweight, Obesity, Diabetes, and Law (OODL) is underway.  From 9 (Wed) to 11 (Fri) April 2014.  At the World Health Organization Regional Office for the Western Pacific in Manila, Philippines.  Co-hosted by the International Development Law Organization and the University of Sydney.  In sum, the objectives of the consultation are to examine the problem from both medical and legal perspectives, also considering related issues such as trade, access to medicines, and discrimination; identify examples of best practices and determine methods for developing and implementing national legislation and regulation; and propose next steps towards a regional agenda. 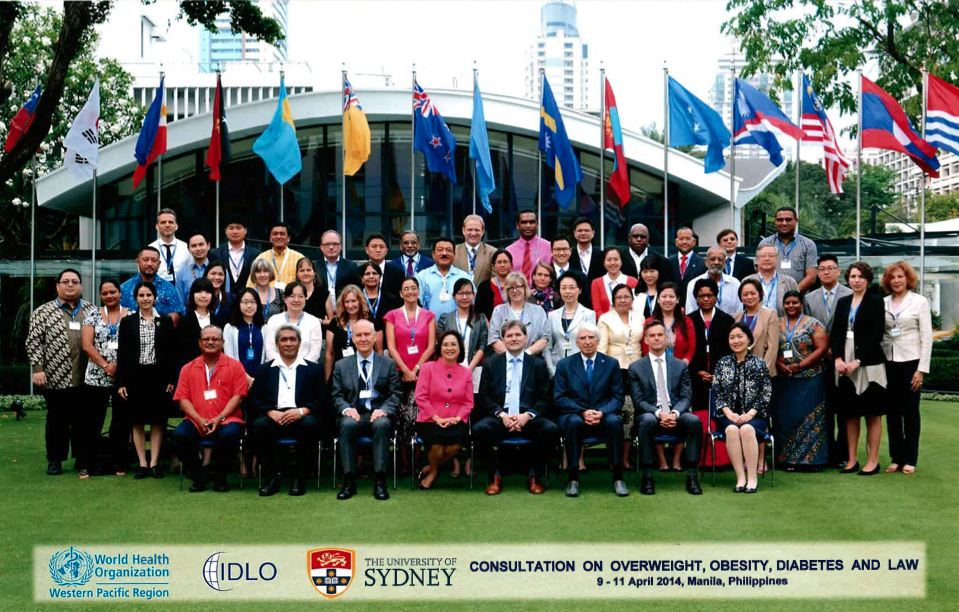 Not including WPRO staff, experts from 19 countries.


The following is an excerpt from the speech that I'd written for our Regional Director to be read at the opening ceremony.  I share it here because it's about food, sort of.  After going through the editor, the text was altered somewhat--minor controversy, for example, because I hadn't used commas to separate "globalization and urbanization and modernization" (dig the 3 Zs!)--but I believe that the original version was better as is--incidentally, the style is very simplistic, because that's how he likes it.  Ultimately, the RD wasn't here, so our division director read the statement on his behalf.

The Western Pacific is one of the most diverse and dynamic regions in the world.   Our Member States are characterized by globalization and urbanization and modernization.

Ironically, with rapid economic growth and increased spending power, our people are starving.  They are starving for foods that are high in quality and nutritional value.  Instead, they are consuming cheaply processed, nutrition-poor foods.  Such foods now dominate the market through mass production and wide distribution and aggressive promotion.

In the Pacific, for example, the typical diet has transitioned from traditional yam and taro to corned beef and hot dogs, from water to sugar sweetened beverages.  Adult prevalence of obesity among Islanders is currently 75%.

The 4 major NCDs—cancers, cardiovascular diseases, chronic respiratory diseases, and of course diabetes—account for more than 80% of deaths in the Region each year.

As with any NCD, diabetes is a complex problem.  It must be viewed from various perspectives and approached holistically.  That approach must envision, embrace, and engage medical interventions, as well as economic and cultural considerations, and of course legal mechanisms, not only for prevention but also for management of the disease. 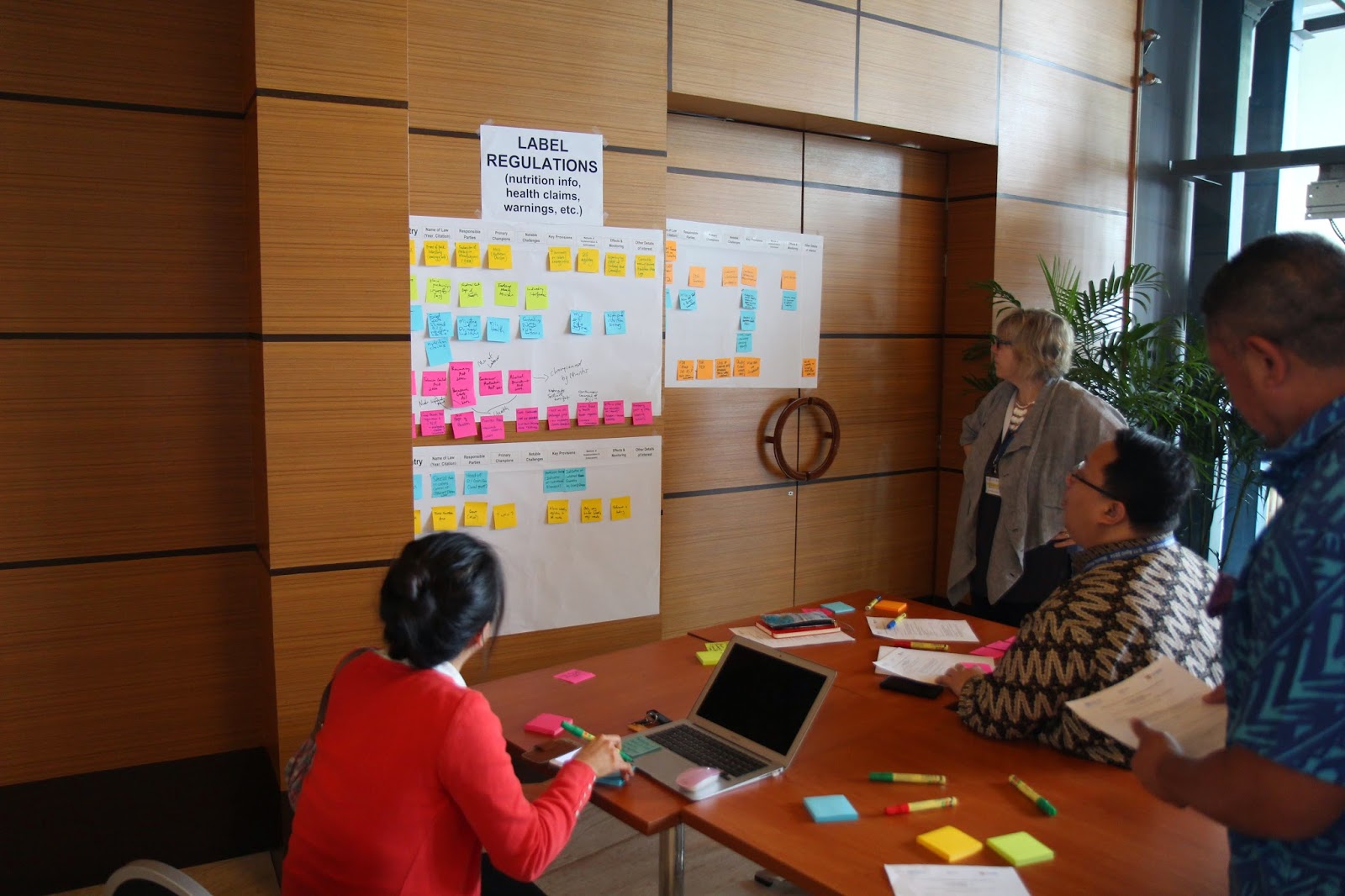 During the afternoon's "Best Practices" group work session, we asked the experts to populate these charts with detailed information on the laws in their countries concerning unhealthy diet and physical activity. 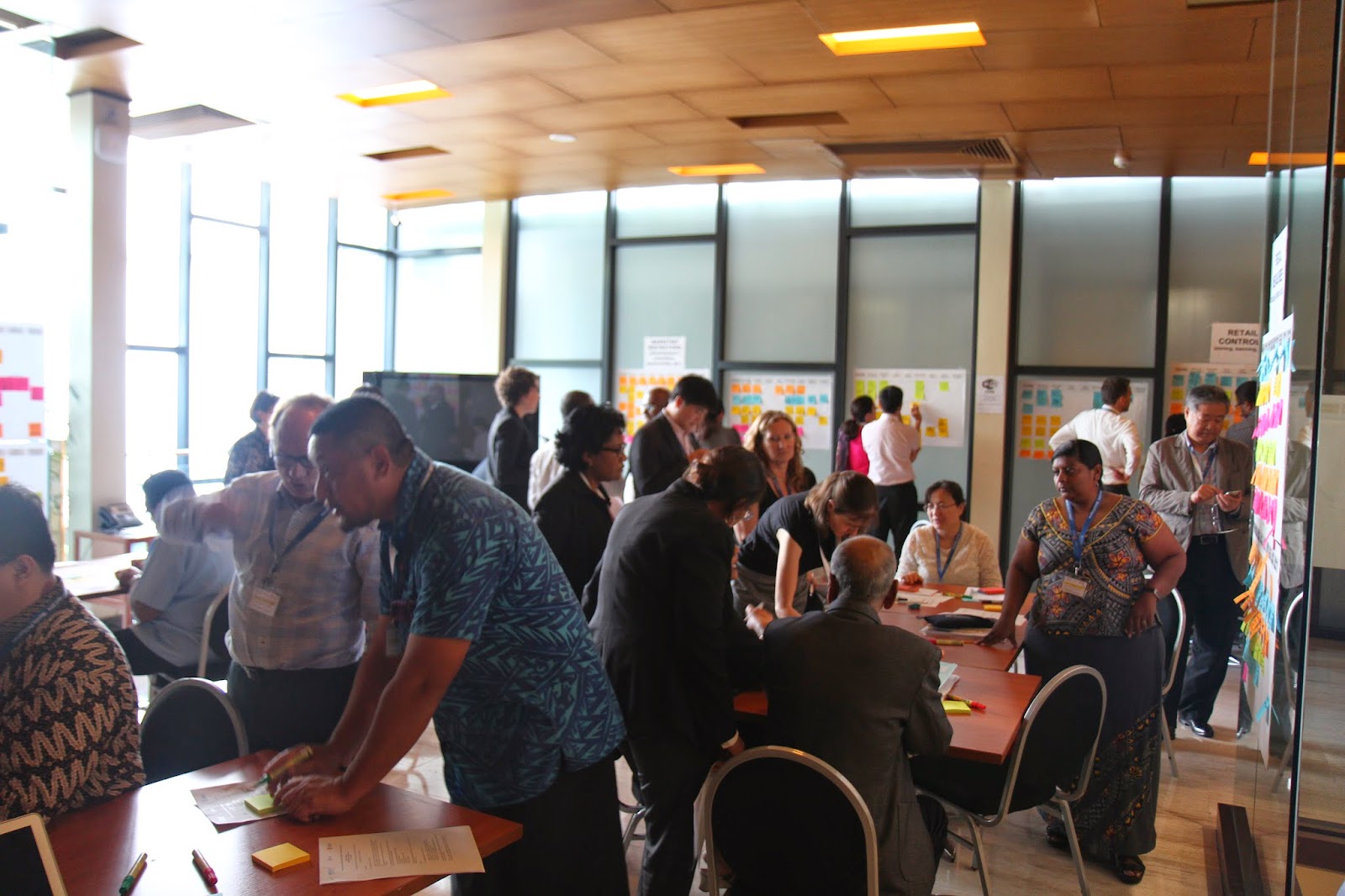 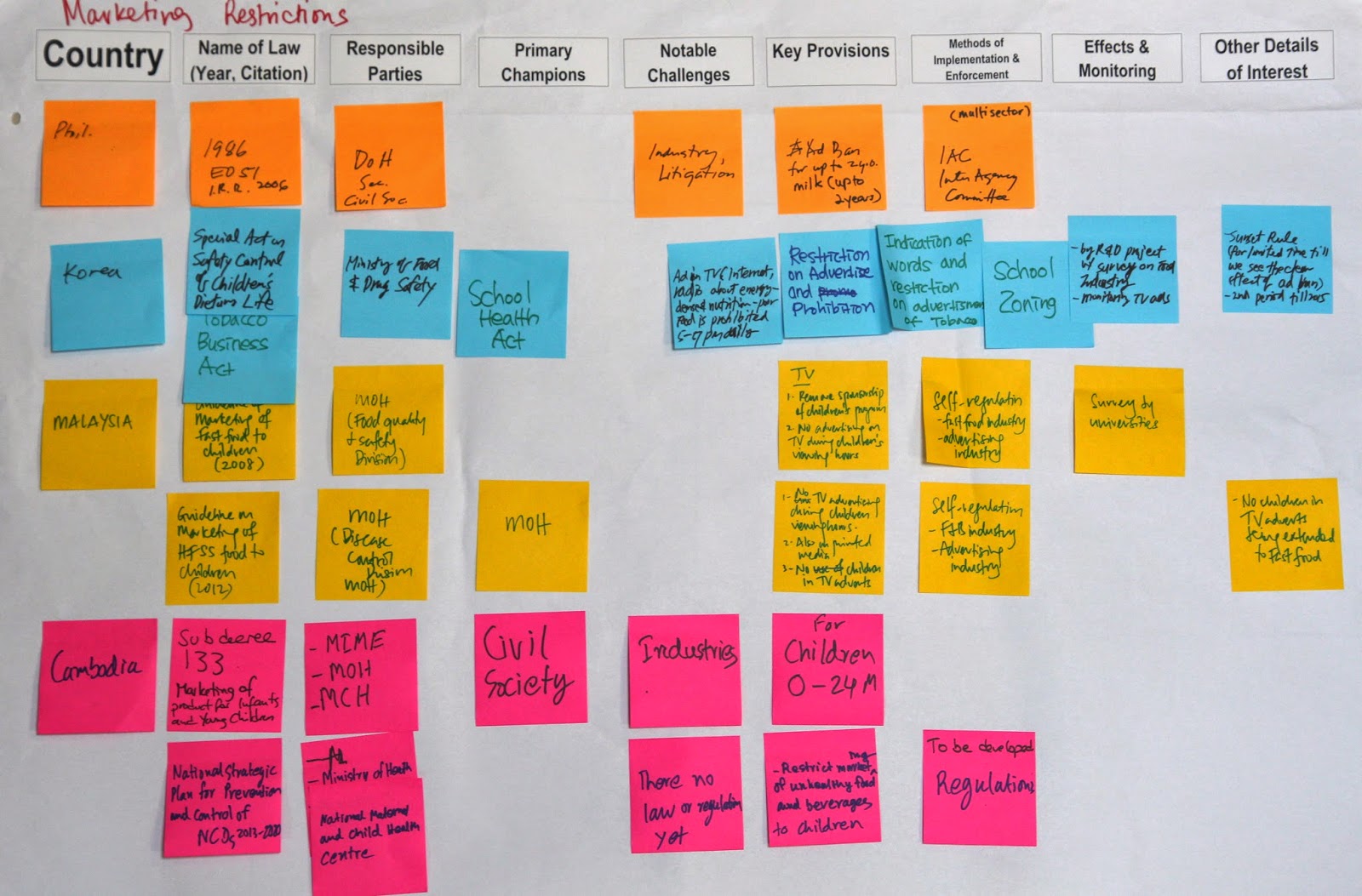 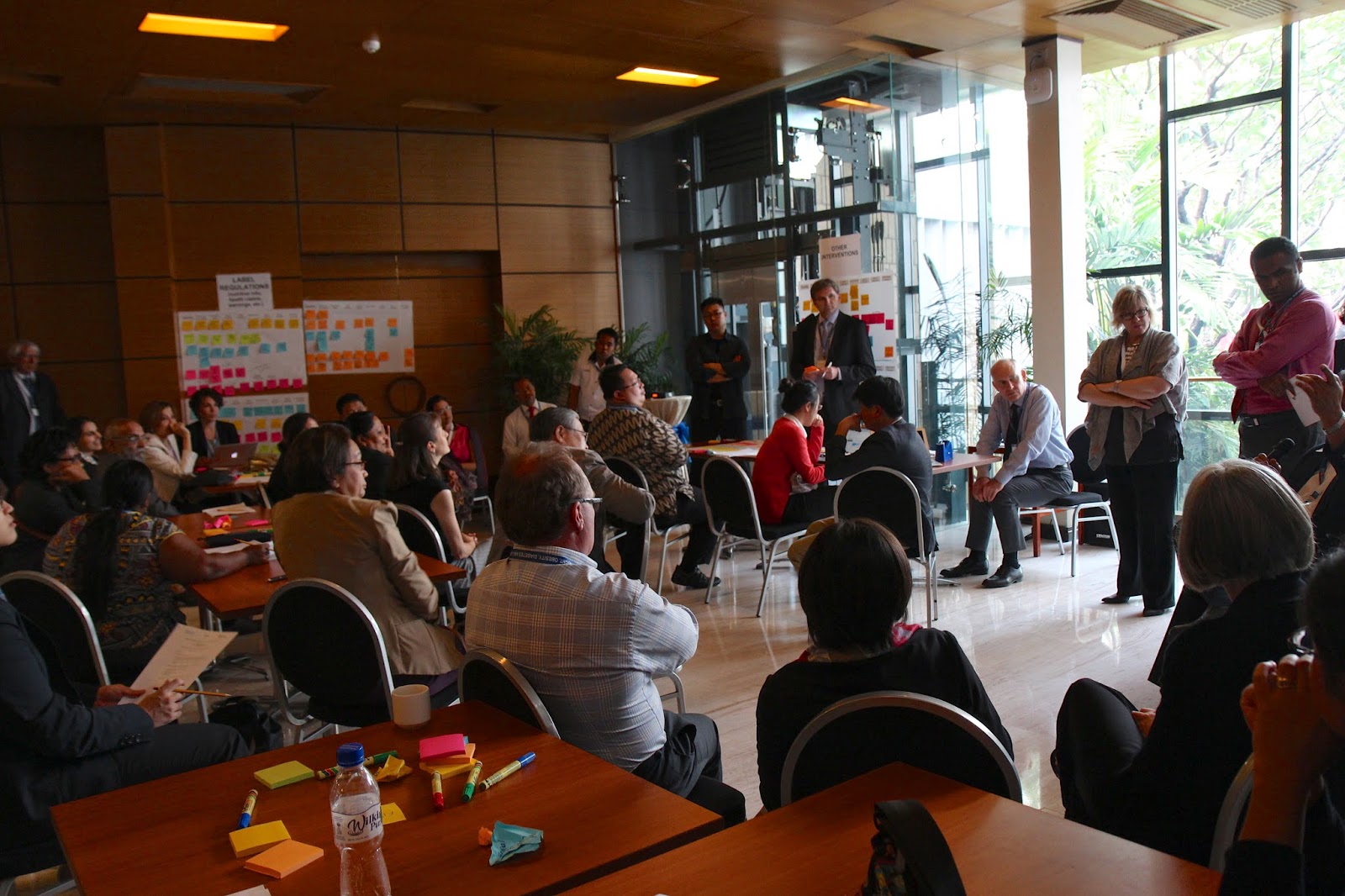 At the end of the session, facilitators reported on regional trends/themes, noted novel approaches, etc.

OODL has been my raison d'être at WPRO, the project for which I was initially hired back in January.  In light of plans that have since developed to stay on in an expanded role through October (see generally 5.083 Mul Naeng Myeon), my work has engaged many other programs in the division, but OODL has always remained the primary responsibility.  Now that it's here, I feel like a pregnant woman whose water has just broken and in labor--not that I would know what that feels like. 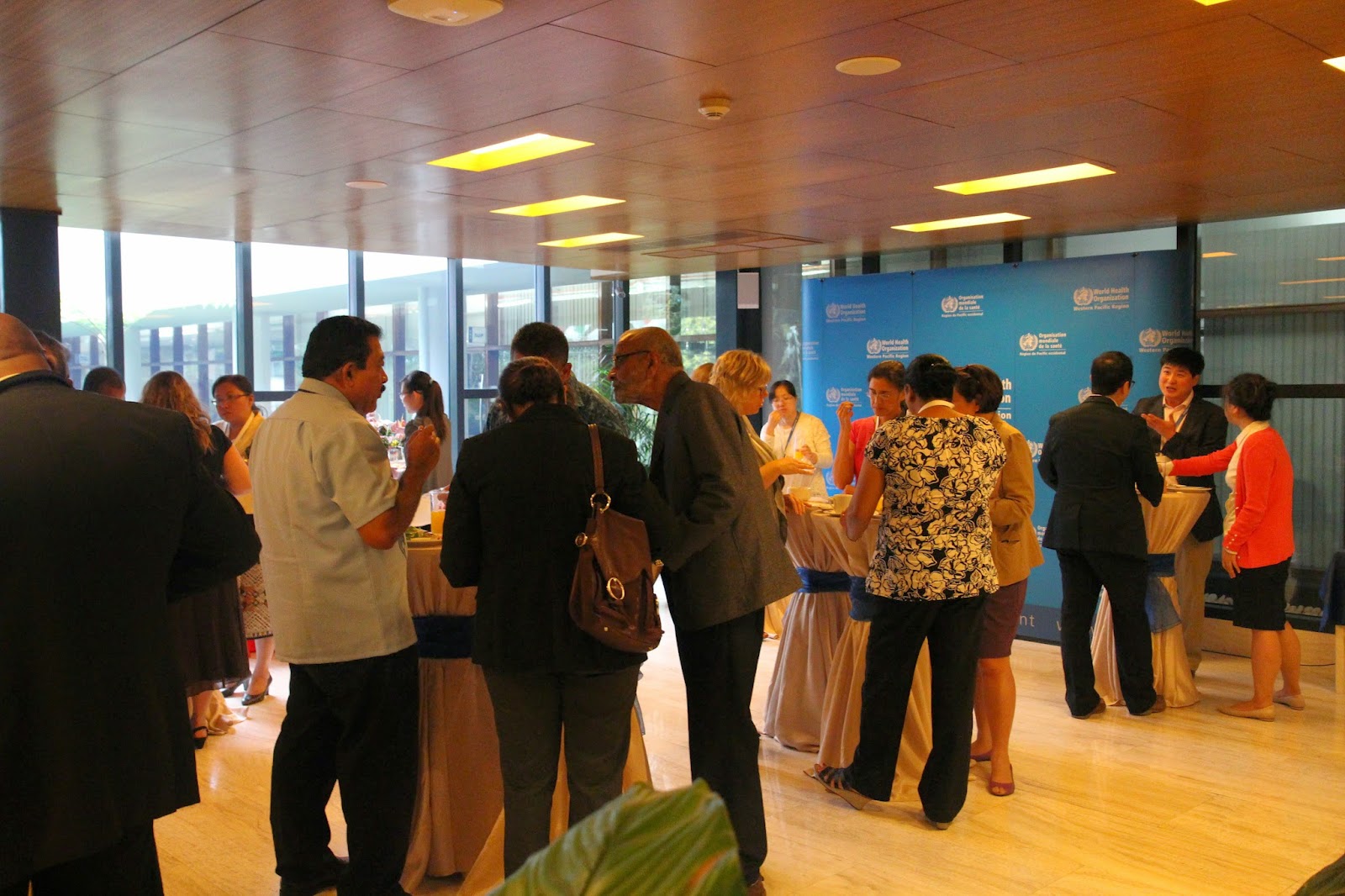 Among the myriad tasks that I dealt with throughout the organizing process, the most fun, the only actual fun part from a personal perspective, was selecting the menus for the welcome reception and the refreshment breaks.  For the reception, I took inspiration from the reception following the concurrent consultations on ENDS and workers' health in February, catered by Shawarma Snack Center (see generally 5.065 Mixed Grilled Plate).  I'd even gone to the restaurant to conduct additional research (see generally 5.078 Broccoli & Shrimp + Falafal).  For the breaks, I took inspiration from various spreads prepared by the cafeteria throughout the weeklong WR/CLO meeting at the end of march (see generally 5.082 Feta & Olive Skewers).  Given the subject matter of OODL, I was careful to keep everything appropriately light and healthy, no desserts, no sugar-sweetened beverages, no alcohol. 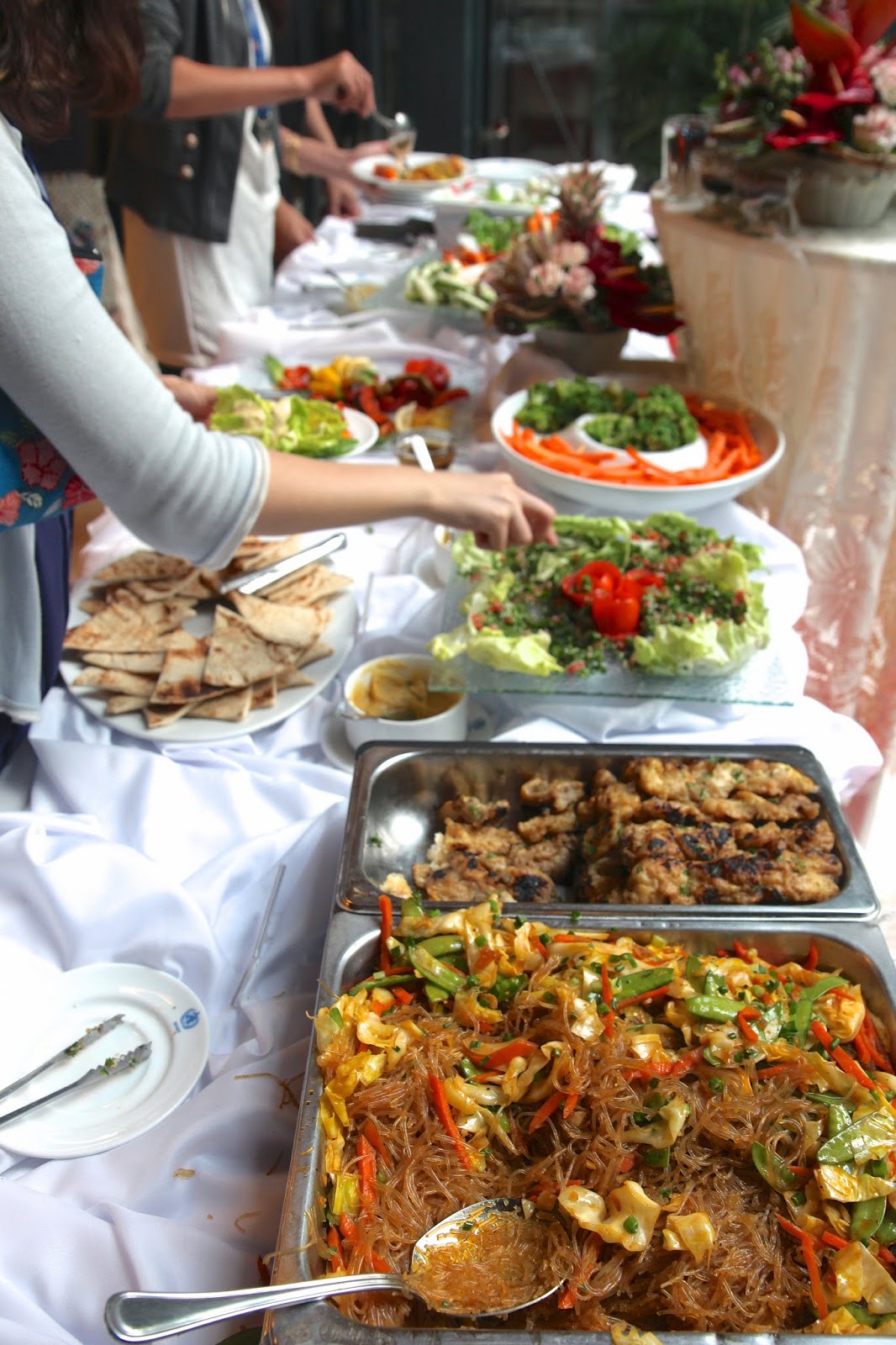 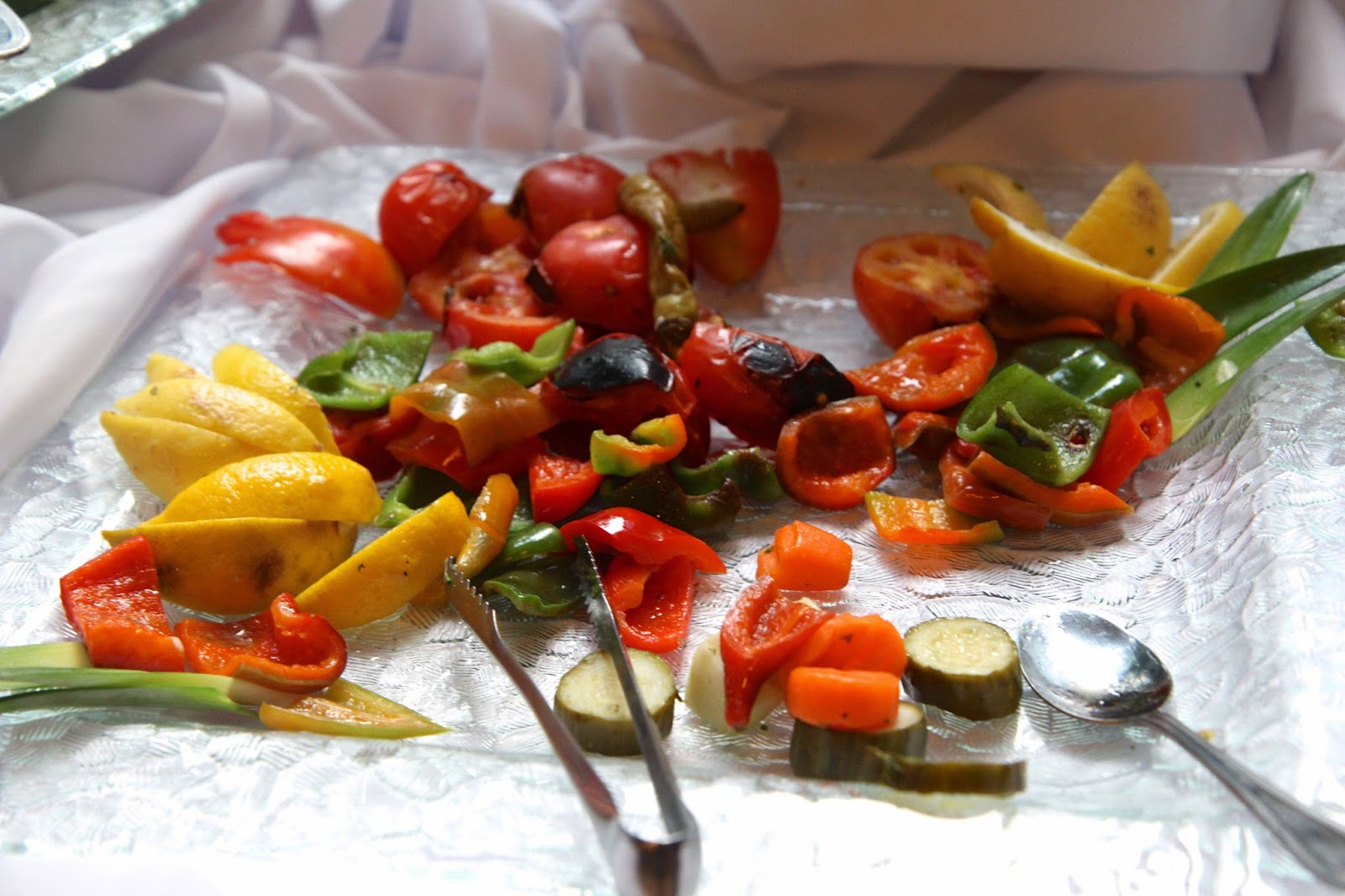 Not the grilled veggies that I'd had in mind. 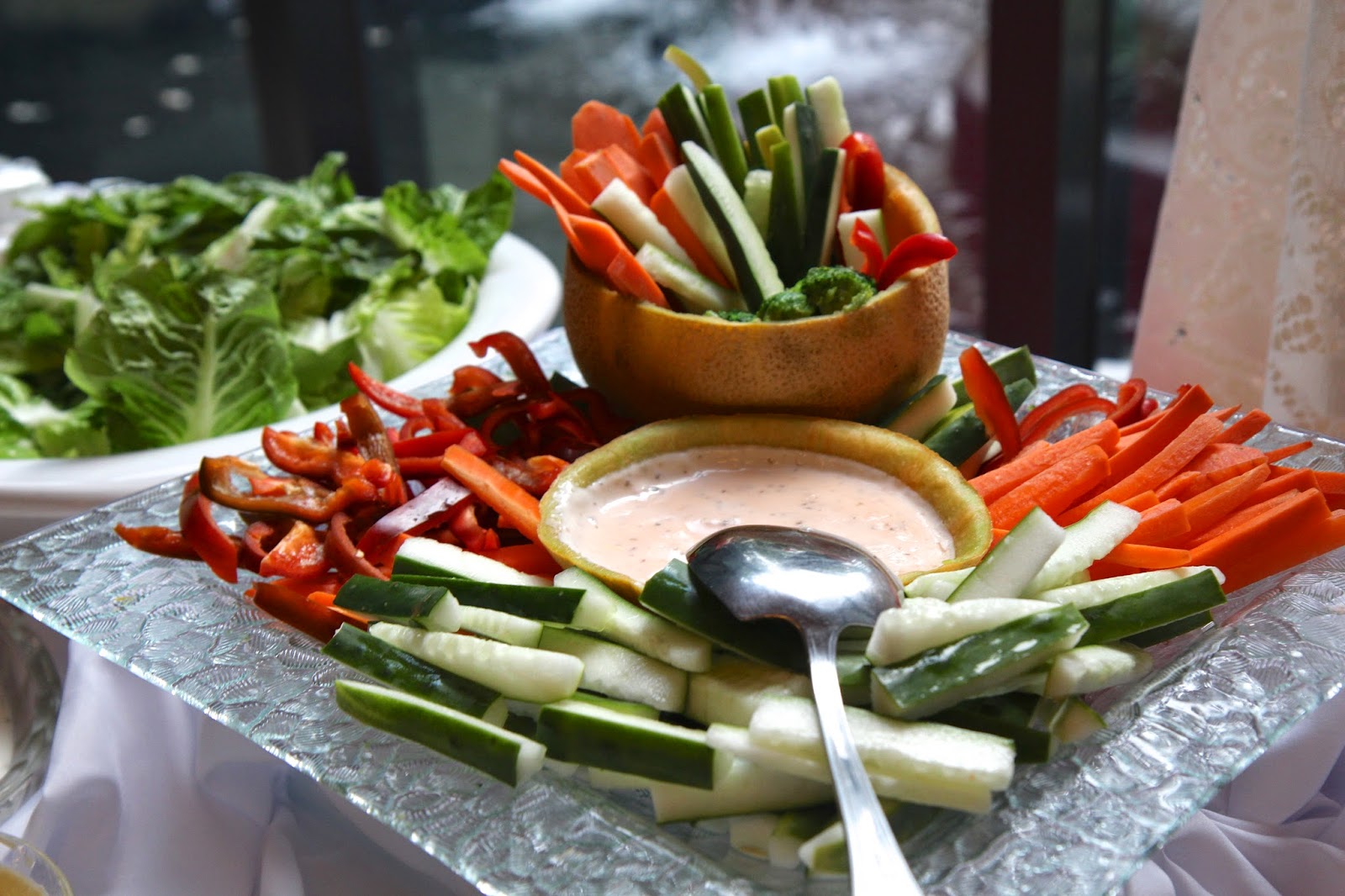 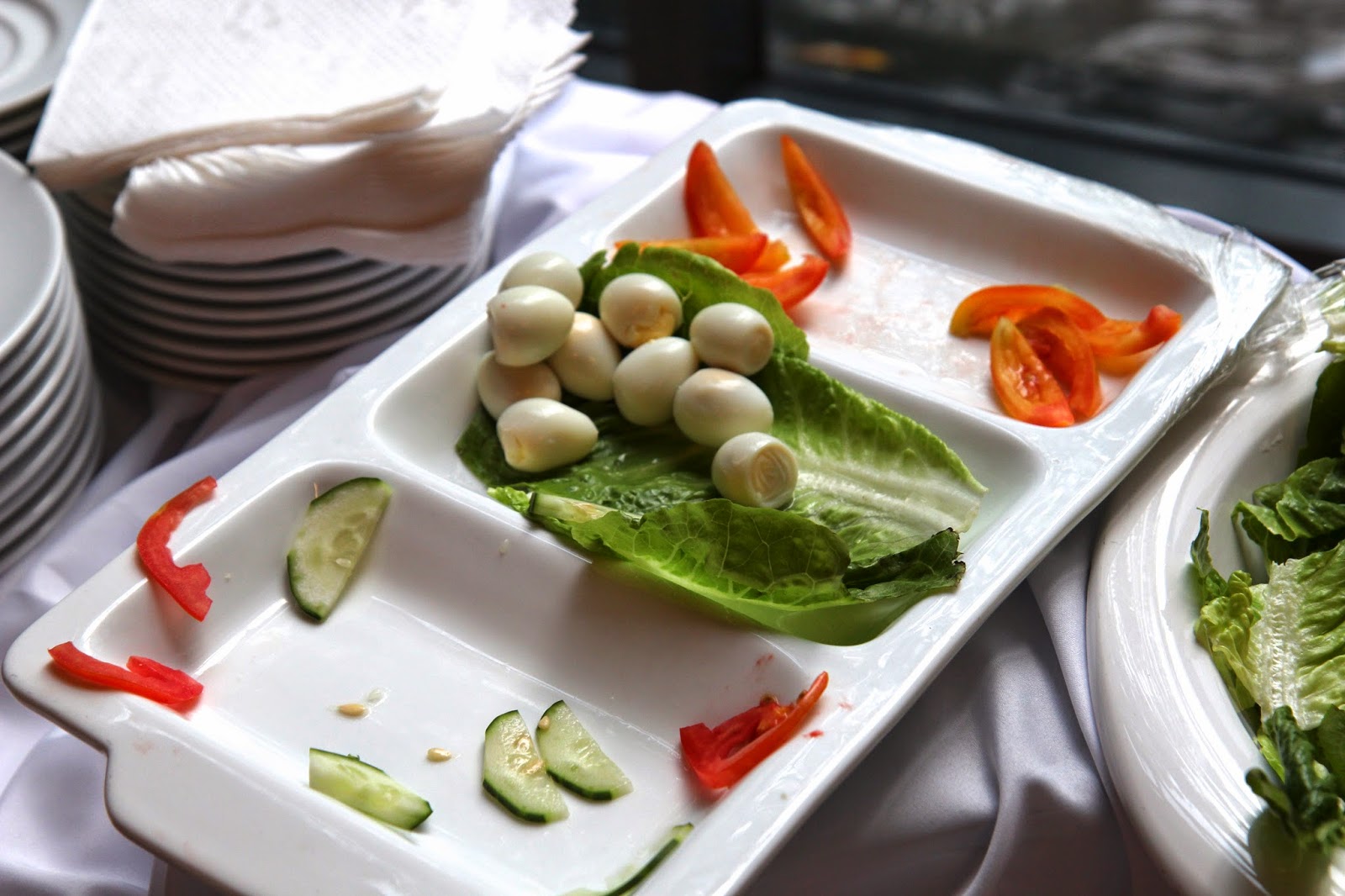 
Best laid plans, the menus got hijacked.  1.5 hours after the opening bell, at the first break, where one of the items served was penne in tomato sauce--in retrospect, I admit, not very light, though relatively healthy--our director called an audible and decided to rework the menus.  For whatever reason, the order from Shawarma Snack Center got cancelled and transferred to the WHO cafeteria, which kinda prepared the same items.  Oh well.

If this ends up being the biggest glitch of the consultation, I'll take it. 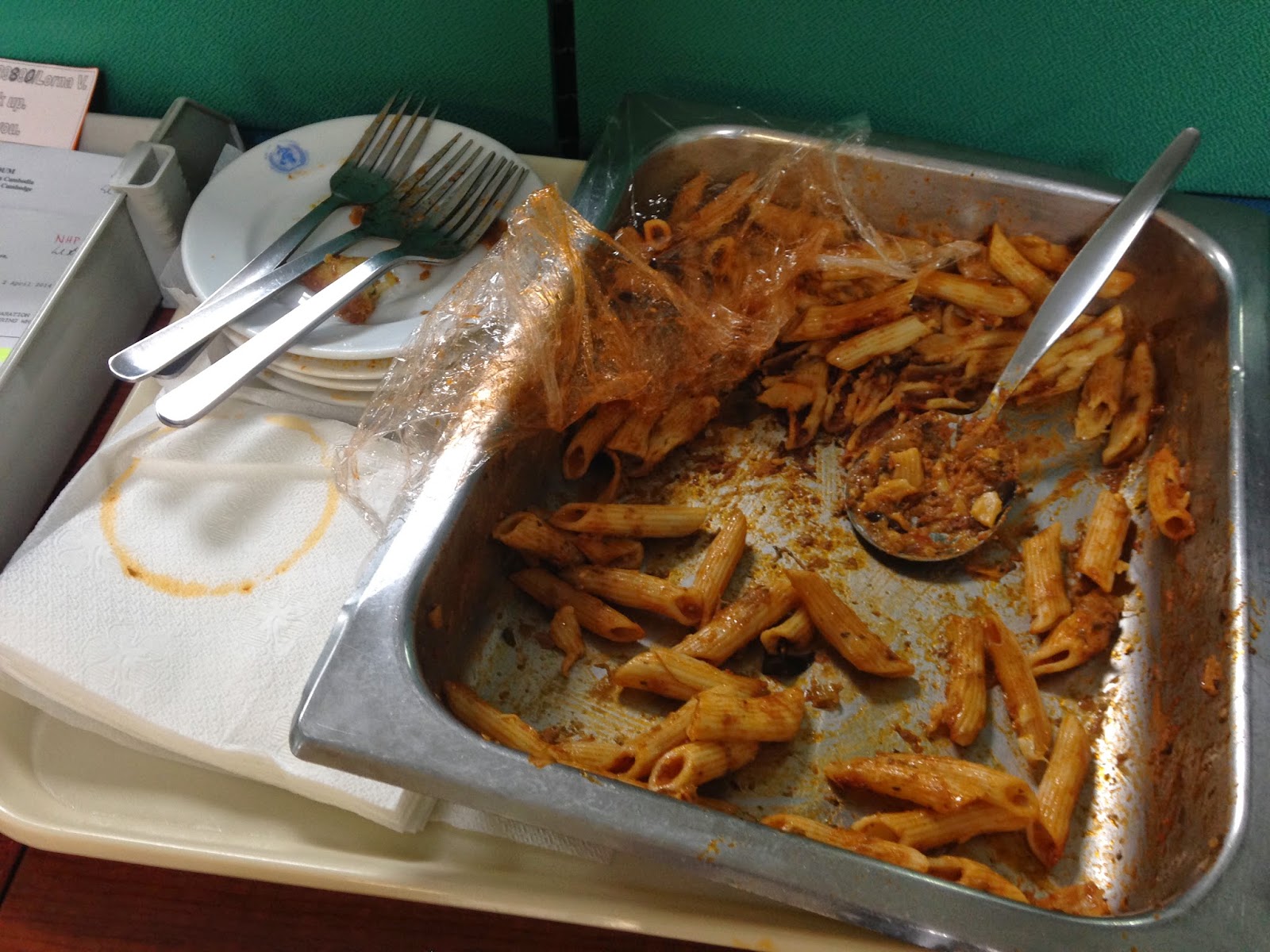 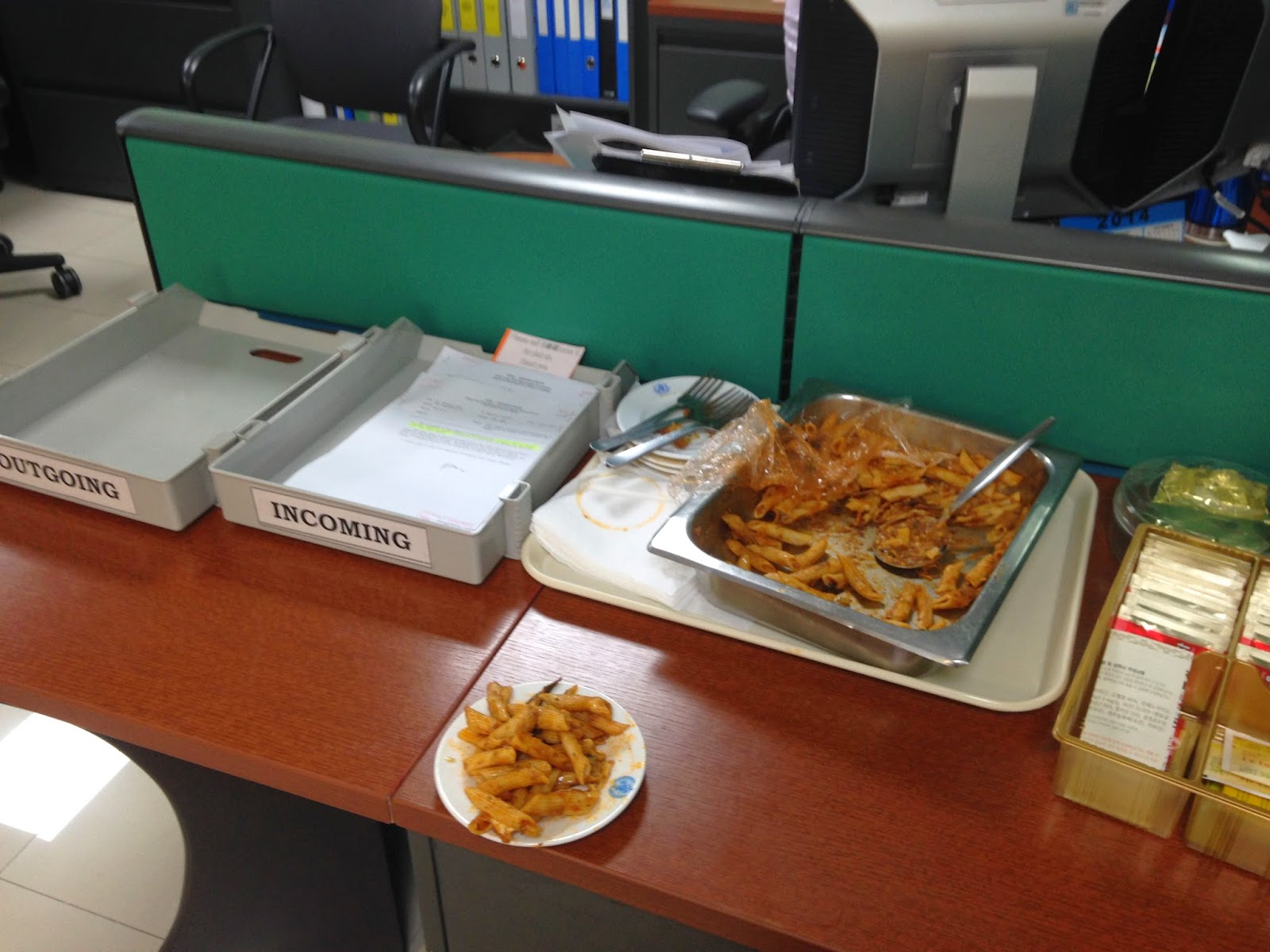 Leftovers were distributed upstairs in our division offices, where everyone enjoyed the food immensely, you're welcome.

Earlier in the afternoon, we were honored to hear a presentation from Congresswoman Estrallita B. Suansing of the Philippine House of Representatives, who has introduced a house bill to add a 10% ad valorem tax on sugar-sweetened beverages.

Inspired by her example, I've sworn to quit drinking Coke (Zero/Light/Diet).  With a habit of 2 to 6 cans a day, quitting won't be easy.  Probably even more difficult than quitting smoking, though that was surprisingly easy for me despite having smoked more than a pack a day for 21 years.  Wish me luck.

Now if only I could quit booze.