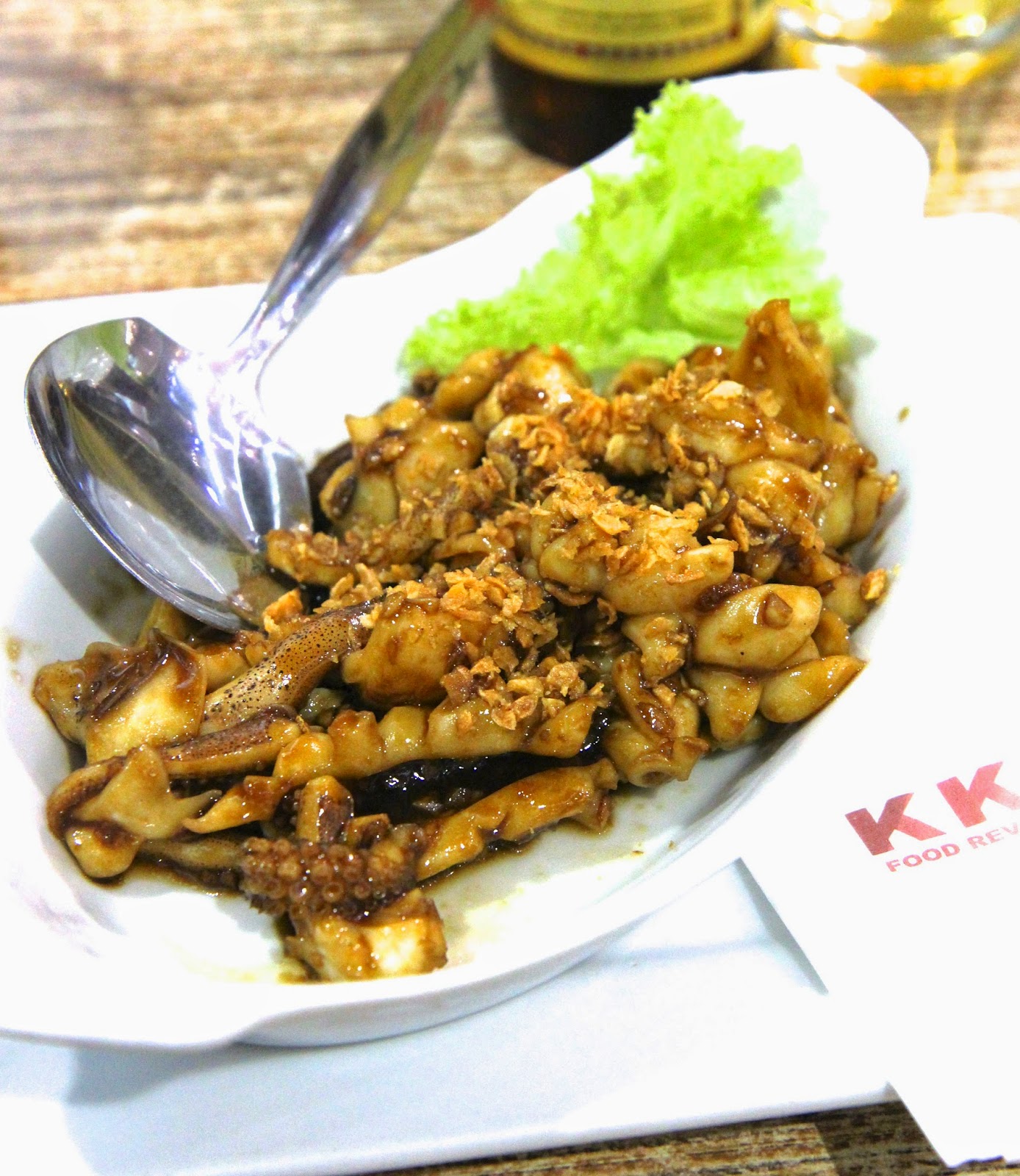 at KKK (Mall of Asia)

The barong is a type of Filipino shirt.  Collared and cuffed like a standard western dress shirt, with buttons down the front but usually only halfway.  Always worn untucked, the length extends well below the waist.  Considered a formal garment, the buttons are typically some expensive/fancy-looking material, like real/fake pearls/gold.  Embroidered in various patterns along the front.  Traditionally linen, though cheaper modern versions may consist of polyester.  Light and loose-fitting, it's an ideal top for the tropical climate of the Philippines.   May be and often is donned, along with appropriate dress pants and shoes, in lieu of a western suit and tie at official functions, such as weddings and even court appearances, and of course at work. 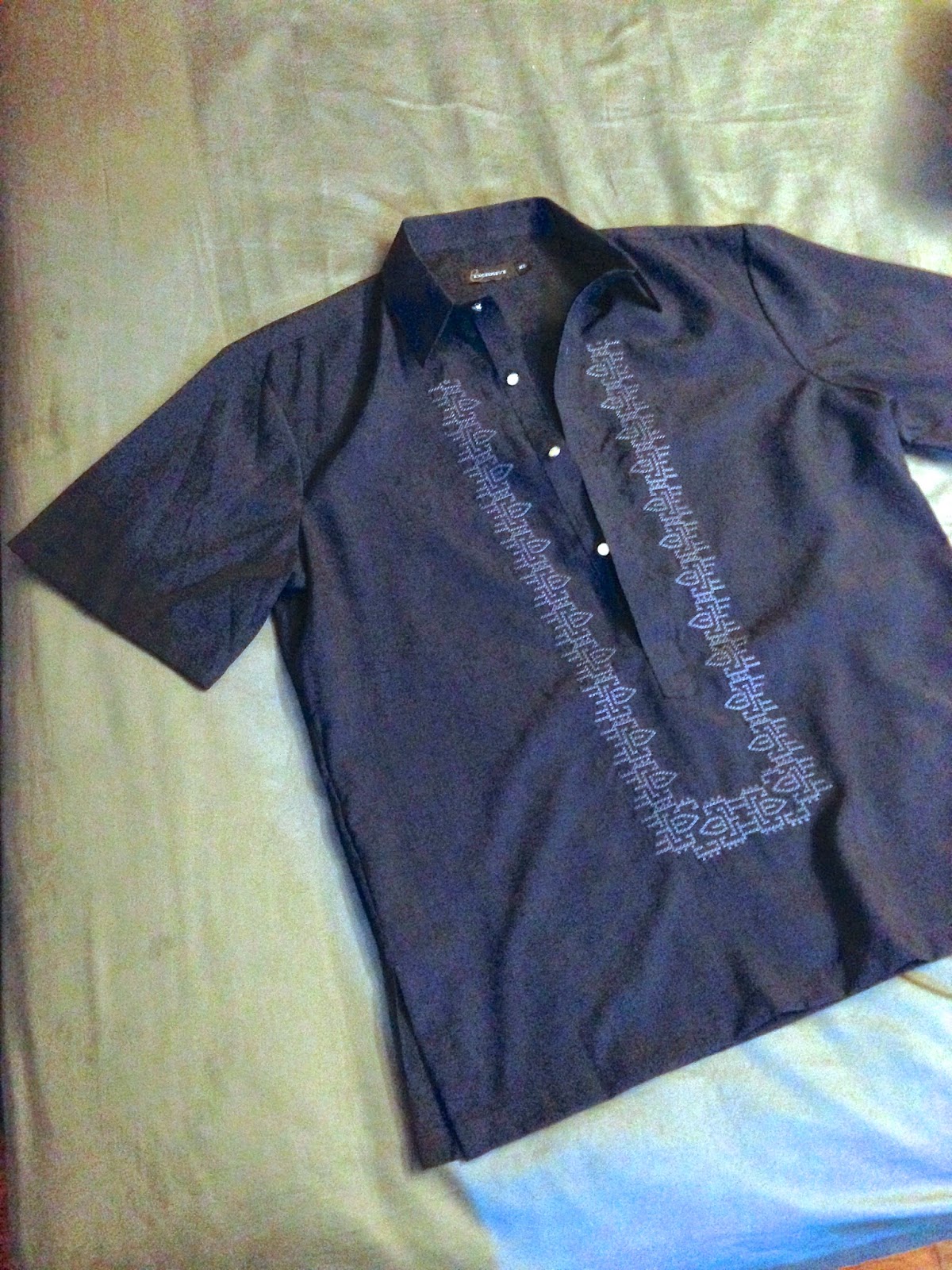 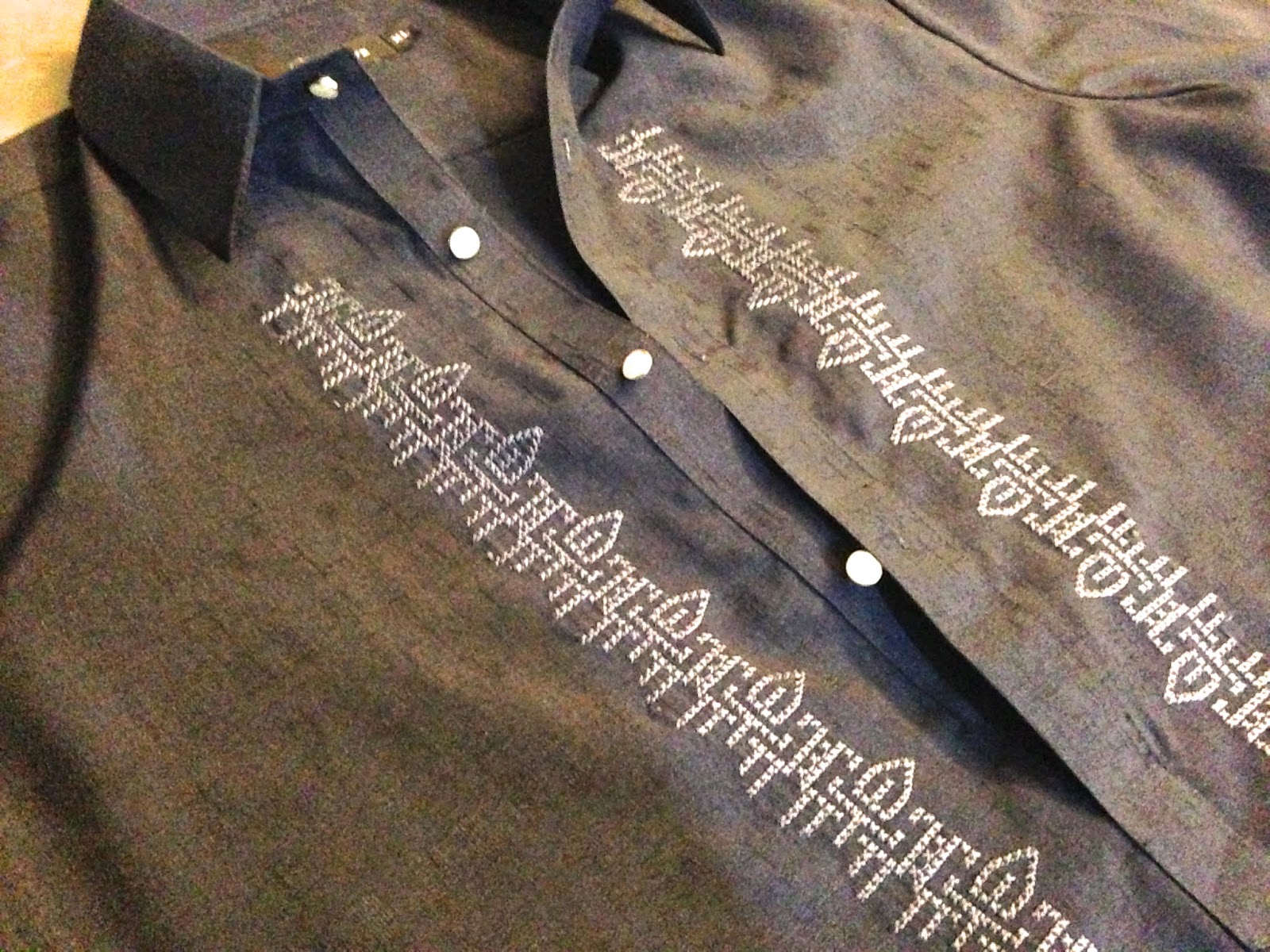 My first two barong, both the same design, one in navy, one in charcoal [when I later wore this to Korea, my wife said: "You look Filipino"--though she didn't mean it as a compliment, I took it as one, thank you very much].


Time was, I once worshipped the suit and tie.  [I'd drafted a full and detailed paragraph here on my favorite aspects--phrases like "black wool crepe" and "working surgeon's cuffs" came up--but deleted everything because--well, for obvious reasons.]  I'd even wear business attire to casual gatherings.

But after a decade in academia, and now at WHO in the Philippines, I can't stand it anymore.  So uncomfortable, especially in the heat/humidity.  So impractical, particularly the need to dry-clean and iron.  So silly, that necktie.  So sexist, that a woman in the same position under the same circumstances may wear open-toed sandals, a miniskirt, and an open-neck sleeveless blouse.  In any case, whatever I can do to minimize the time that I have to spend under the yoke, the better. 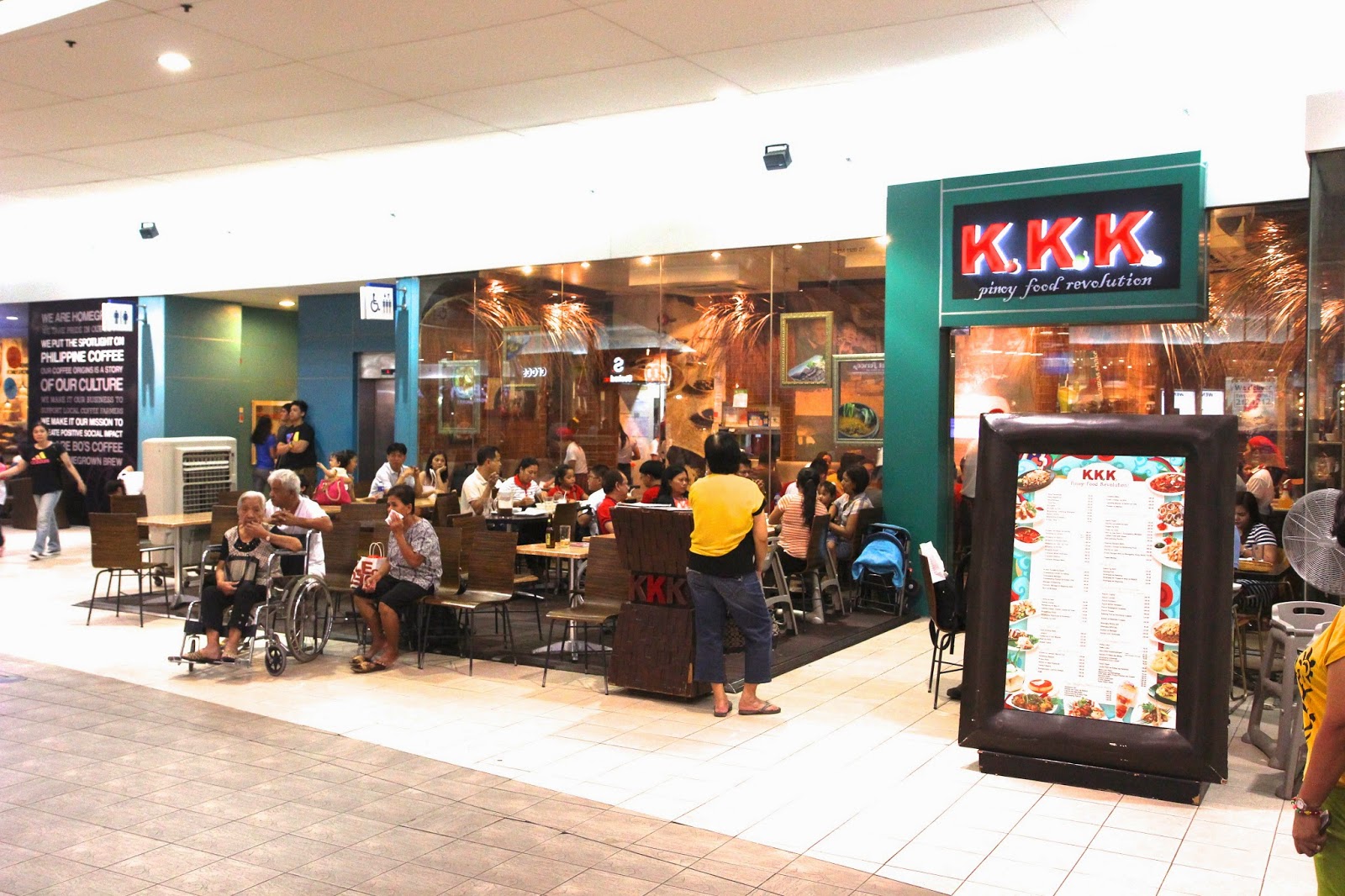 I saw May off at the airport this afternoon.  3 reasons, in order of importance, though any alone would've sufficed: (1) as my intern, she was an integral part of the team organizing the Consultation on Overweight, Obesity, Diabetes, and Law (see generally 5.094 Not What I'd Ordered), which wrapped to a smooth/successful conclusion yesterday, largely due to her vigilant efforts up through the closing bell, so I wanted to express my gratitude, if only by carrying her luggage to the check-in counter; (2) on the way back from the airport, I wanted to stop by Mall of Asia to shop for barong; and (3) my first Saturday in Manila with absolutely nothing to worry about in the coming week, I had the luxury of doing whatever I wanted. 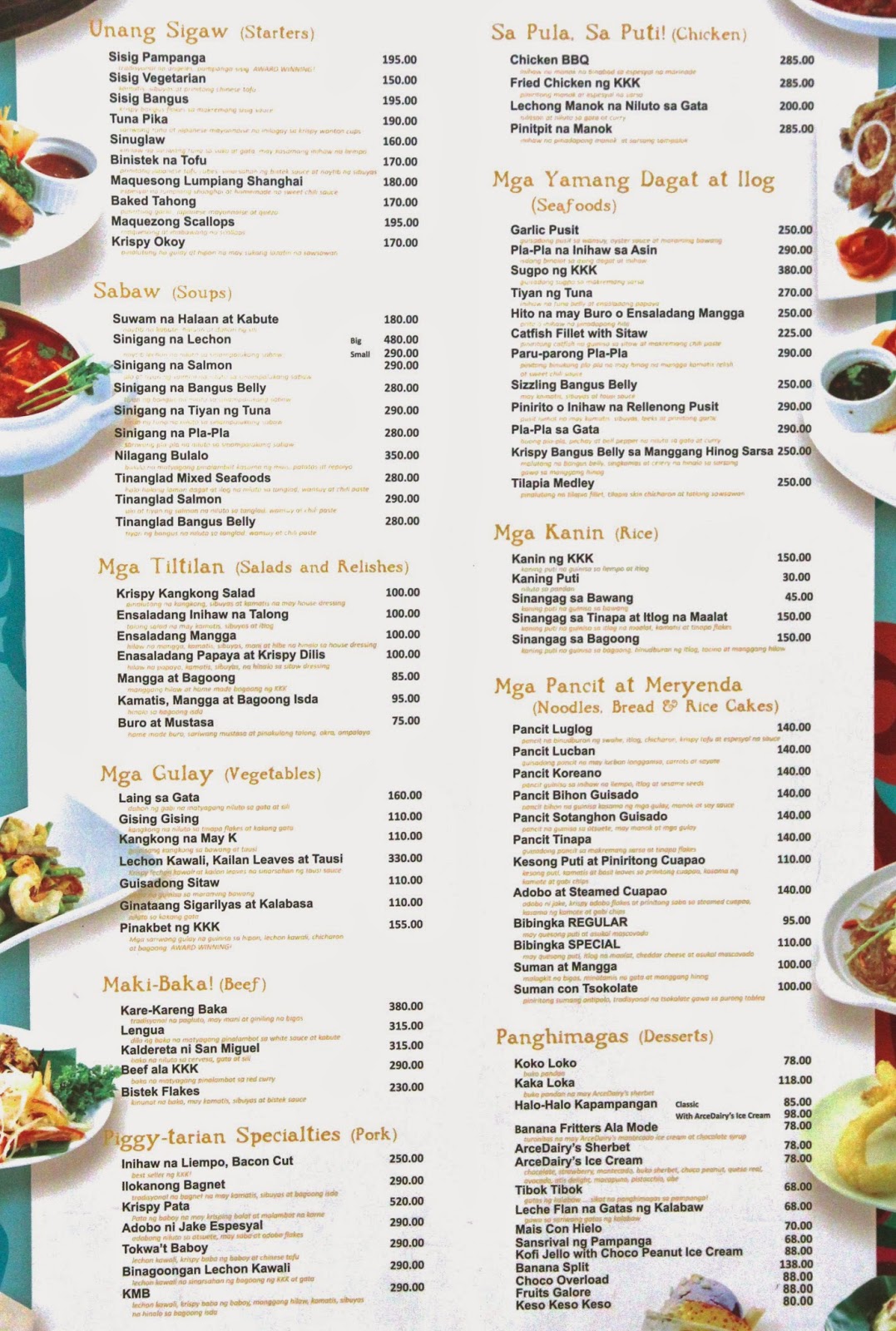 KKK is a Filipino restaurant.  Founded in 2000.  Currently 4 locations scattered across Metro Manila.  With the corporate slogan "Pinoy Food Revolution," the menu offers (supposedly) modernized Filipino cuisine (maybe, but I can't yet tell the difference).

I hadn't planned on eating in the mall, but seeing the name on the signage of the restaurant while passing by compelled me to stop for a quick bite.  It doesn't mean what Americans might think.  Upon request, the manager wrote down for me what the letters stand for, something very innocent in Tagalog, something about "good food," but I've lost the note, so I can't say for sure here at the time of this writing. She did confirm that the establishment regularly receives angry complaints from other passersby--which seems rather ludicrous, because, really, what, do they actually think that the place is an homage to white supremacy? 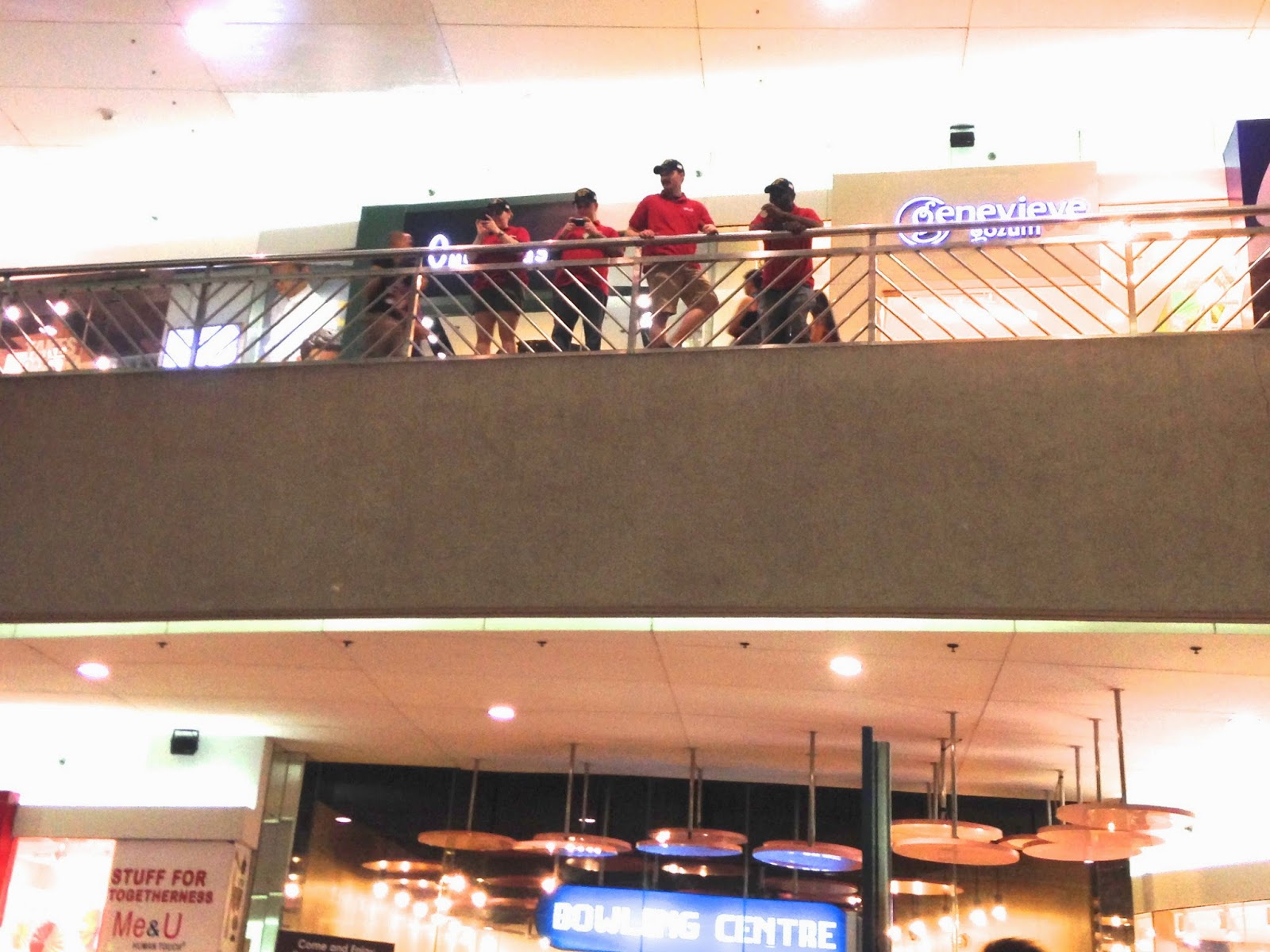 I would've ordered more, but I was short on cash, and the restaurant didn't accept credit.