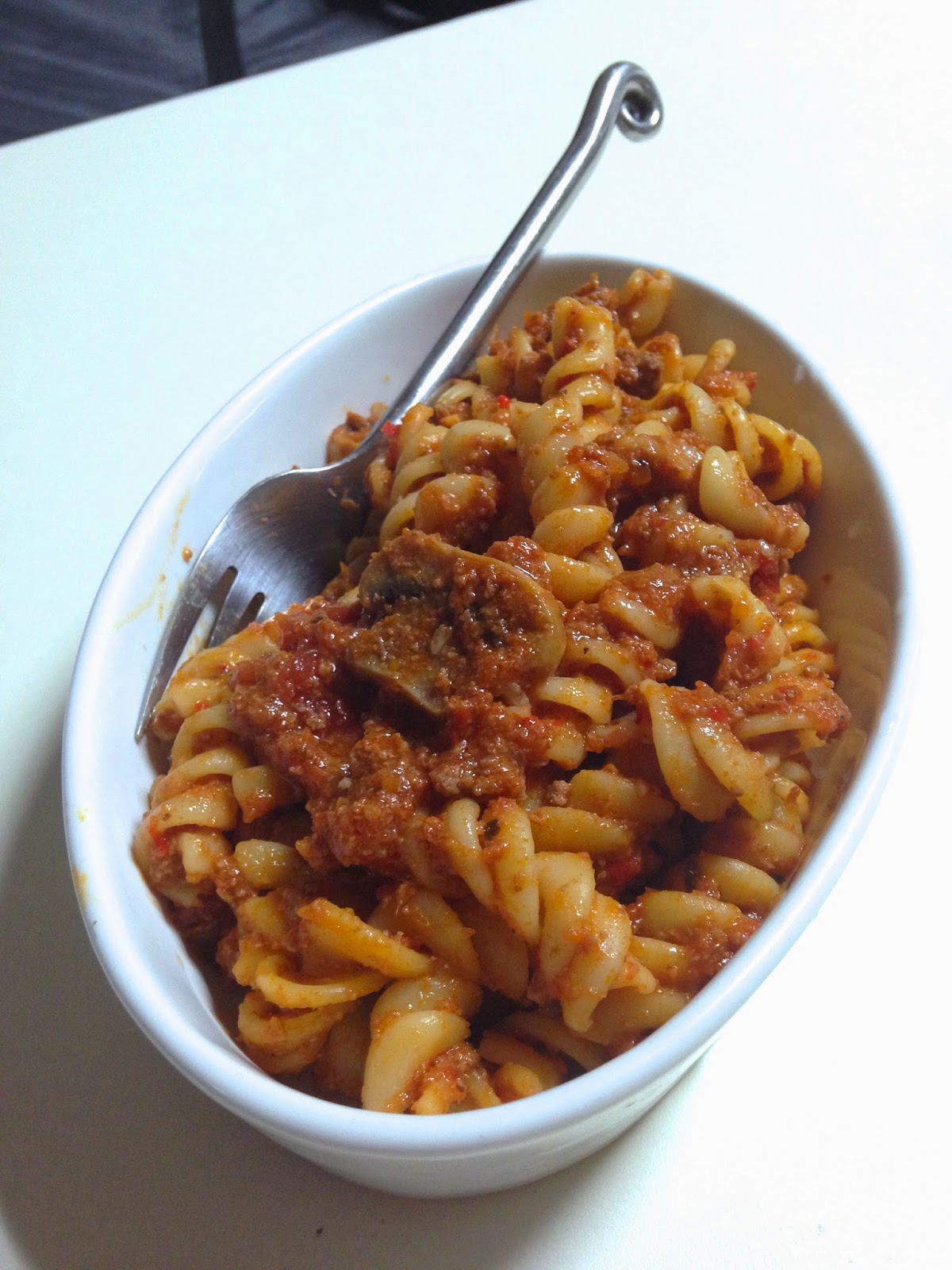 with Dominic and Ian

One of Korea's greatest regulatory achievements is the management of garbage in big cities.  Non-recyclable refuse must be disposed of only in government-issued bags available in all supermarkets and convenience stores--a 20-liter bag, for example, costing (around, I can't remember) 500 won (about USD 0.50)--not a big deal, more of a hassle, but it does compel citizens to set aside bulky bottles and such for the recycling bin.  Violations up to 300,000 won, but I don't know if it's ever enforced.  Regardless, everyone that I know complies.  In every neighborhood and apartment complex, recyclable bins are made available by type.  Even in fast food restaurants (e.g., McDonald's), the trash receptacles are customized with different slots for food wastes, plastics, and miscellaneous waste.  Even campsites follow the system (see for example 5.104 Donggeurang-Ddaeng), although the rules don't apply to them.  And to reduce the use of paper/plastic, large-scale stores (e.g., E-Mart) are required to charge 50 won for each shopping bag or may opt to sell the official garbage bags at cost or give away empty merchandise boxes; as a result, customers often bring their own reusable shopping bags.   I don't know if any of these efforts really make a difference to the environment, but it feels like it will. 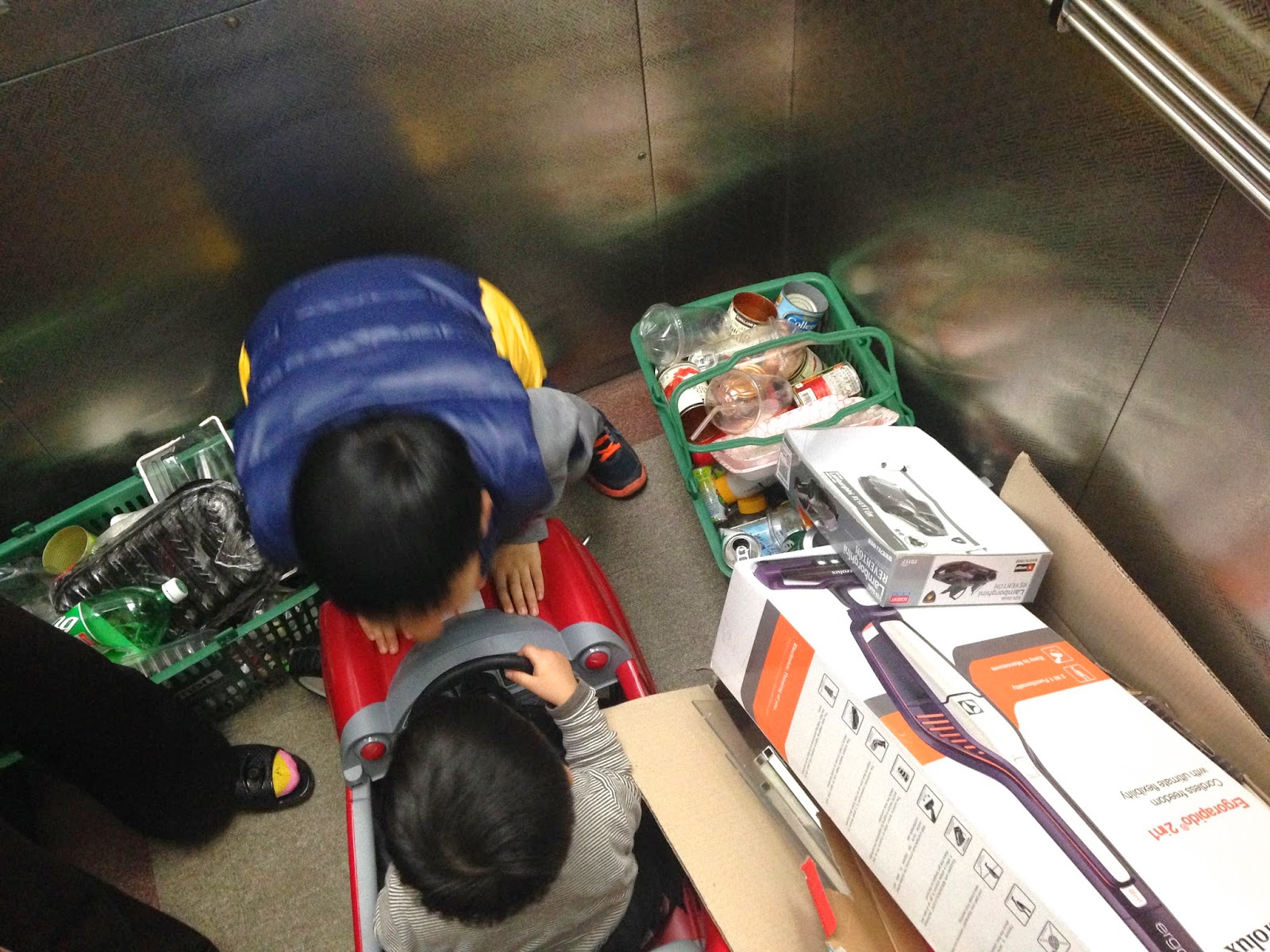 At least in part, I'm in Korea to clean house, quite literally.  Our apartment complex arranges for recycling just once a week--long ago, for esthetic reasons, the residents voted not to have permanent disposal bins, except for food and certain other items, so the guards set everything up ad hoc--begins on Tuesday evening and runs through Wednesday morning, when the garbage trucks come to pick up their loot.  This was the first time since January that I've been here on a Tuesday--and no, my wife doesn't deal with things like this--so the recyclables have been piling up.  A man's gotta do what a man's gotta do. 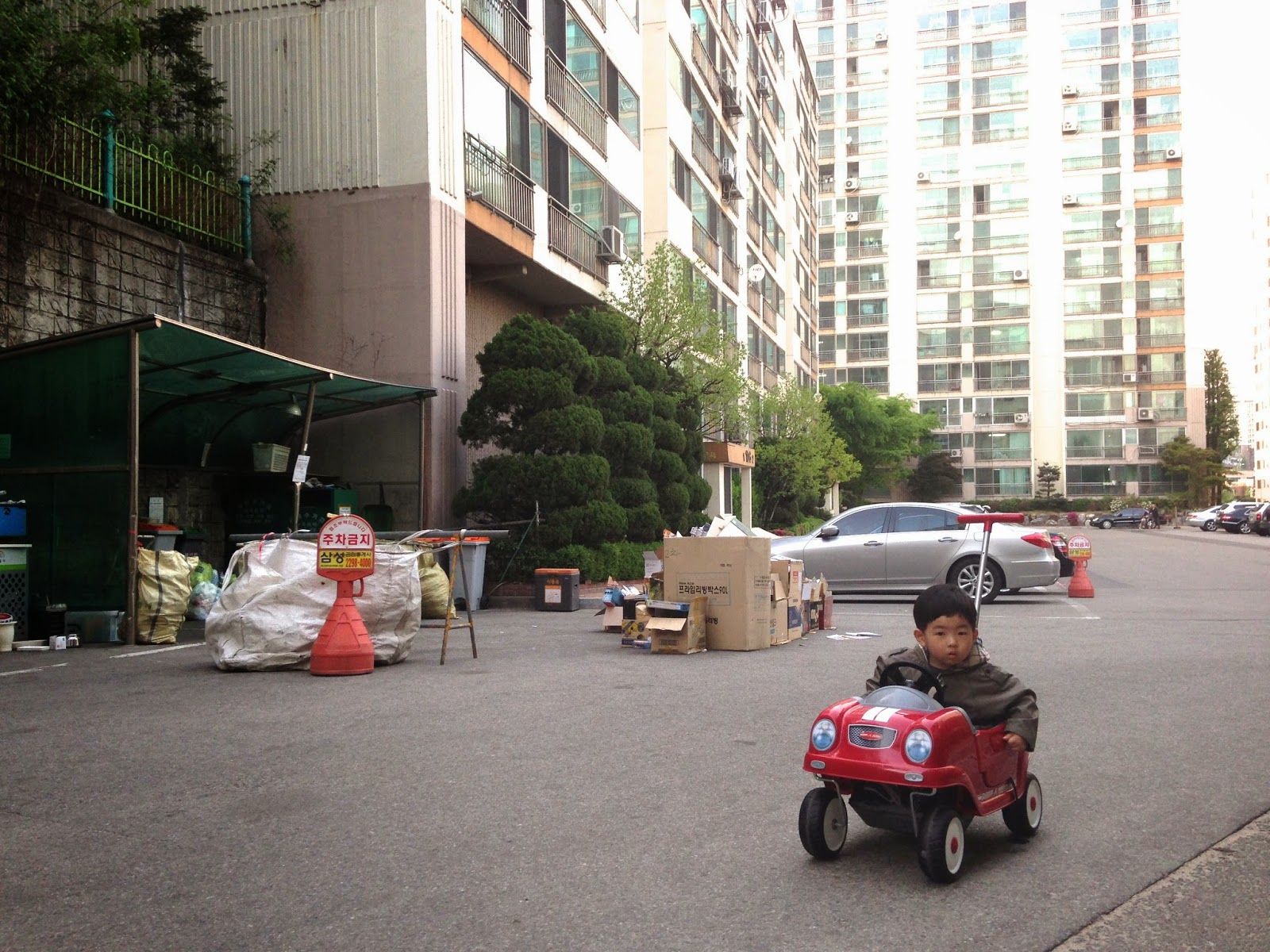 One of the stations is located adjacent to our building. 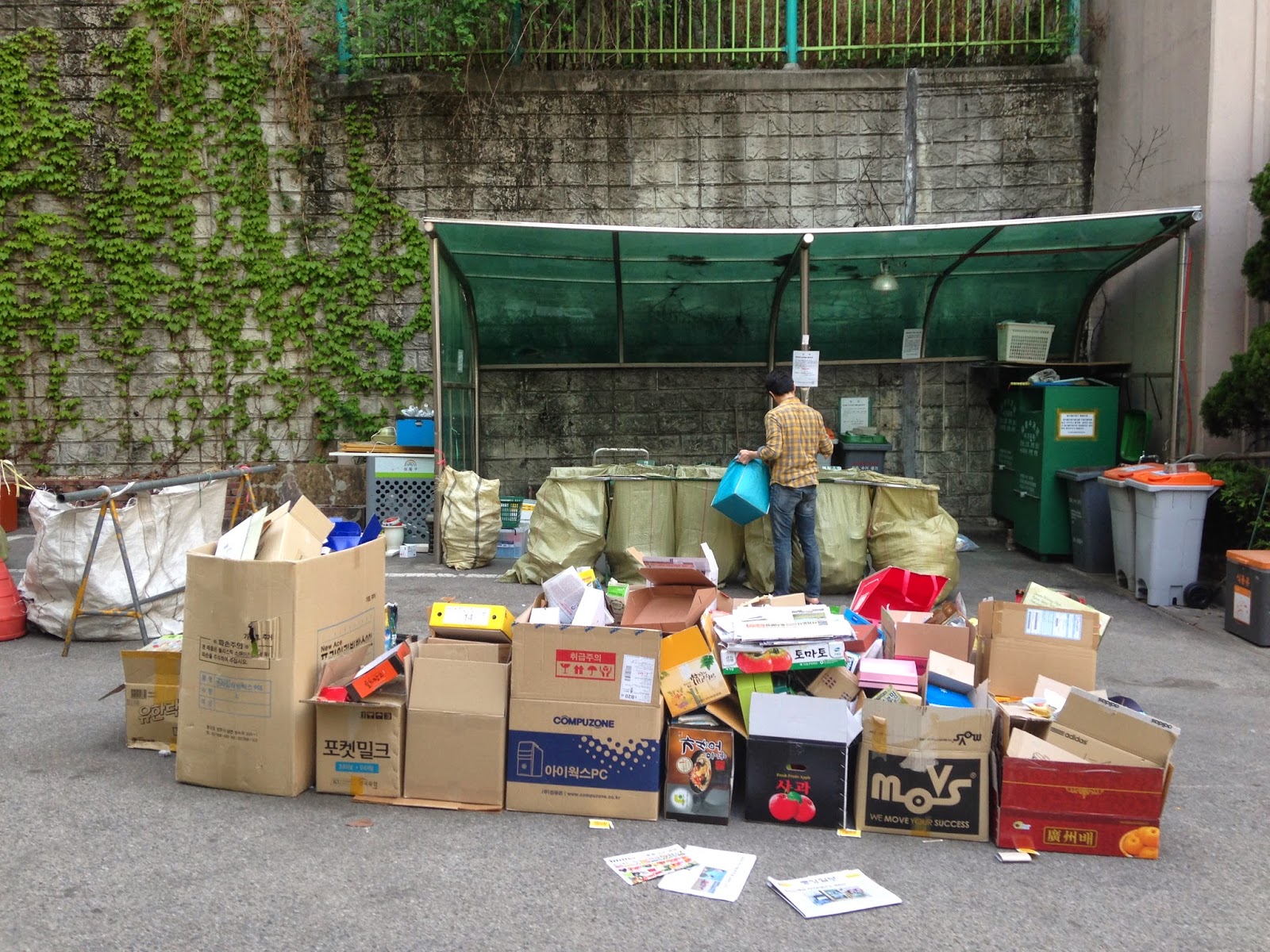 Odd coincidence: that guy has been our upstairs neighbor since both of our families moved in to the newly built complex back in 1999; this is the first time that I've run into him on garbage day; he's moving out tomorrow. 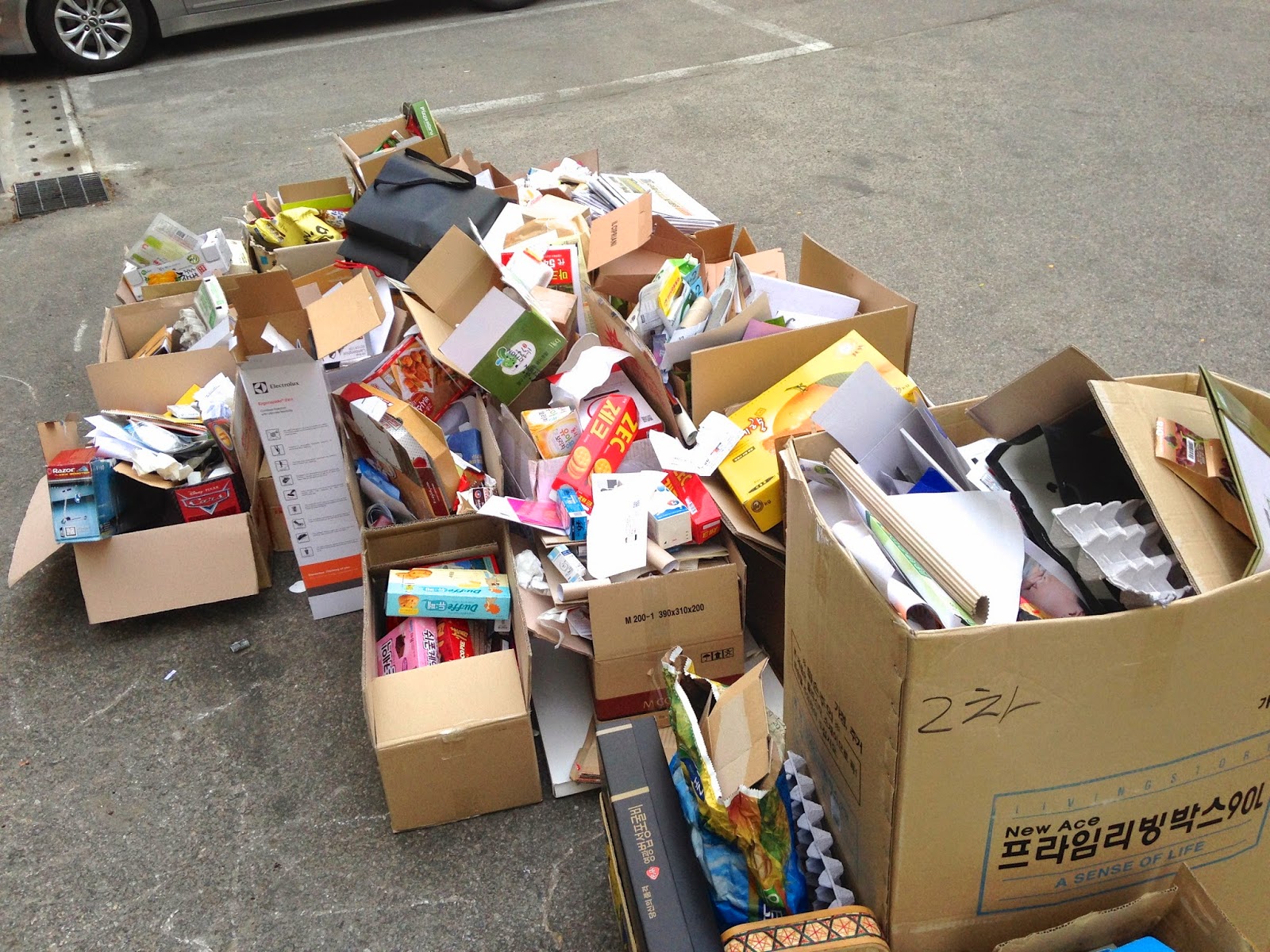 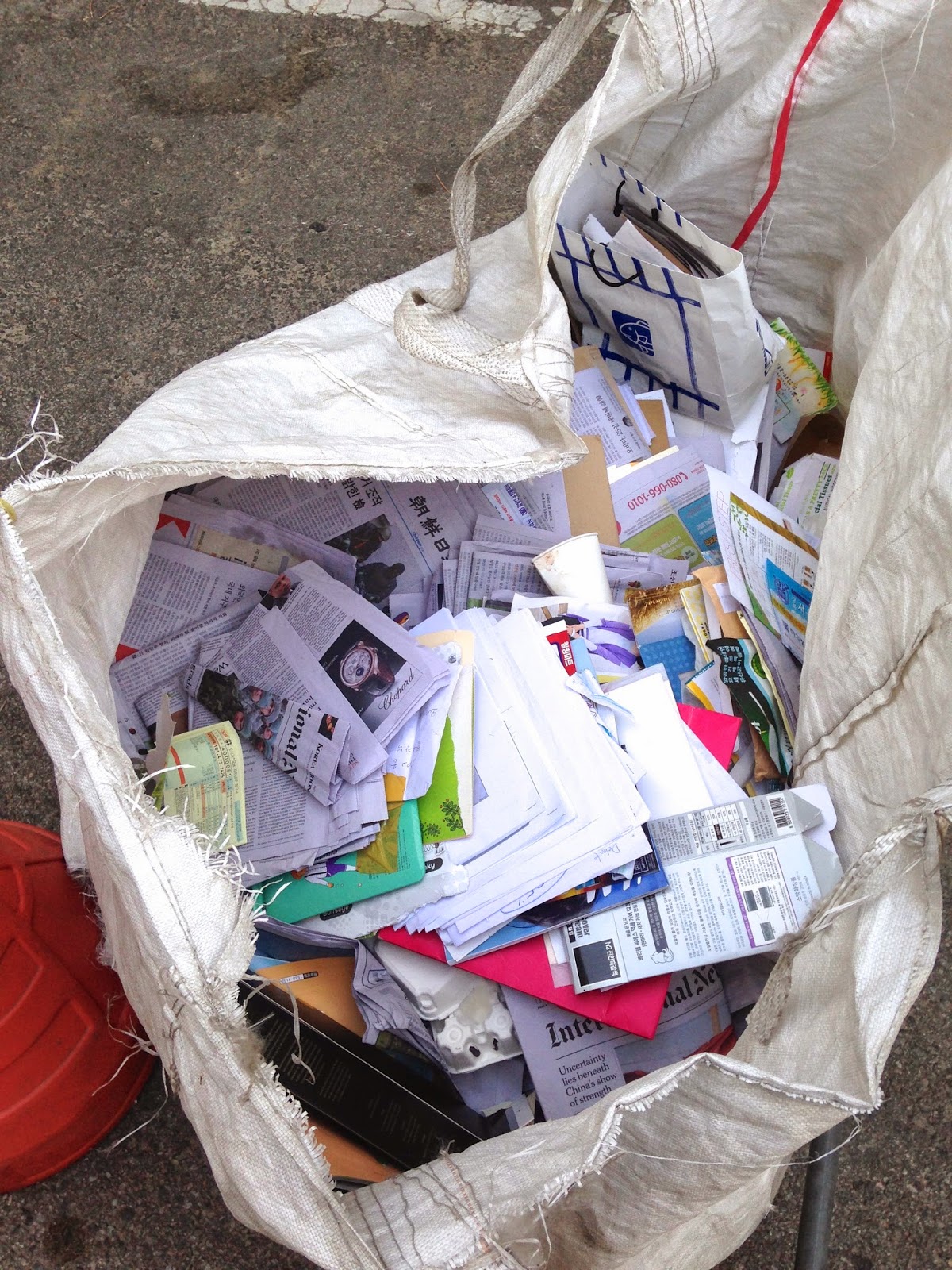 Newspaper and other thin paper. 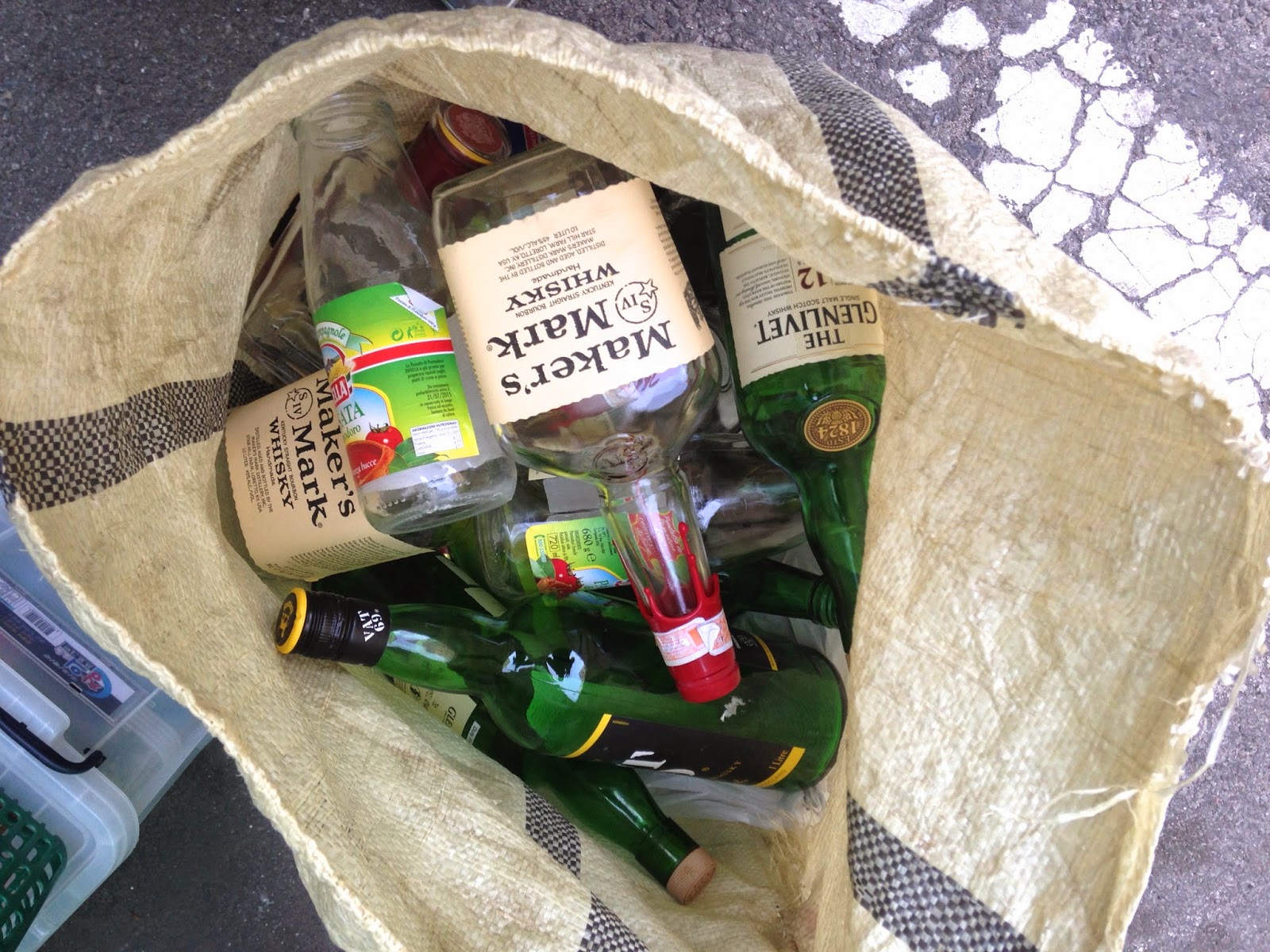 Glass (and no, I didn't drink them all on this trip). 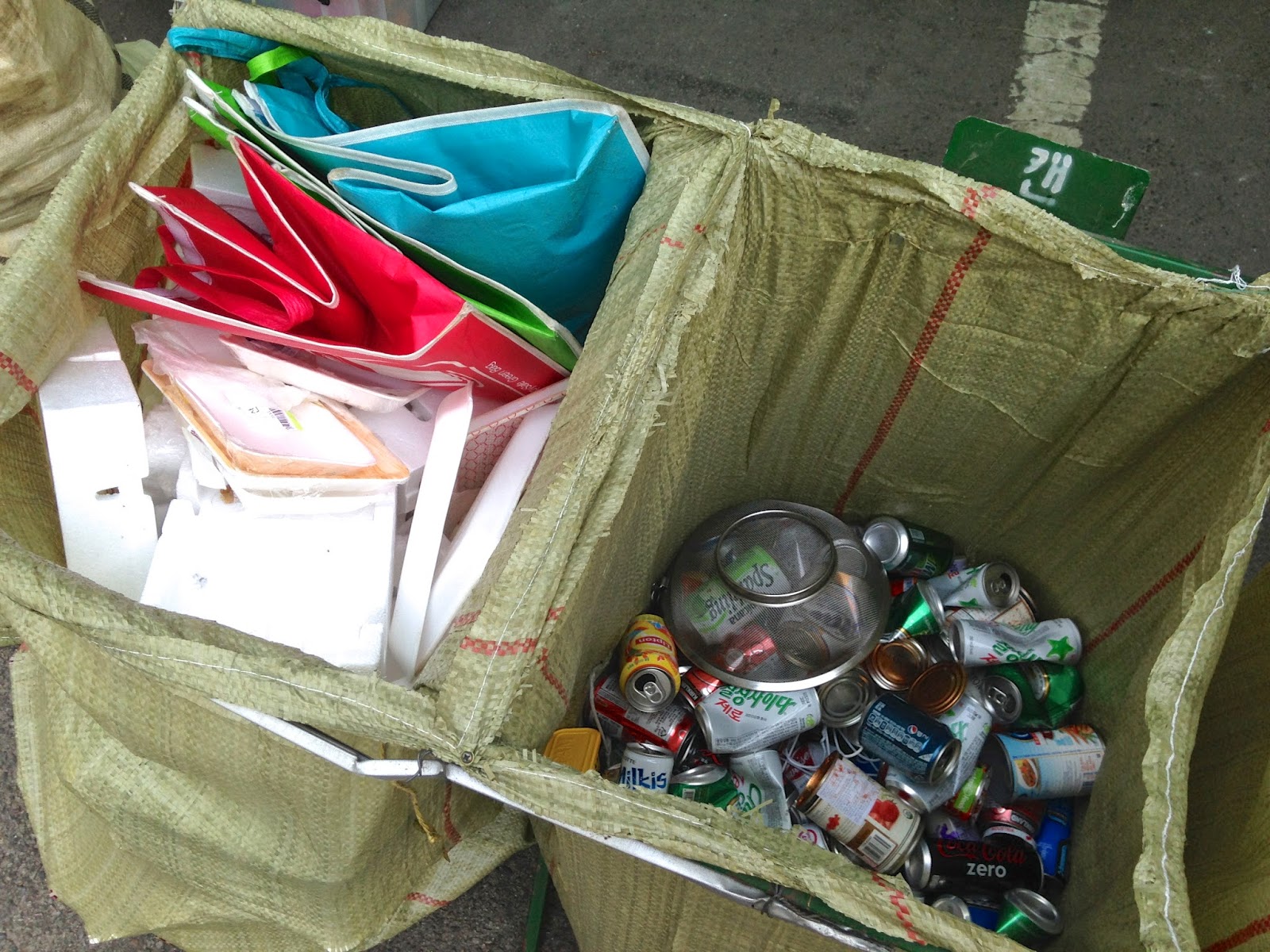 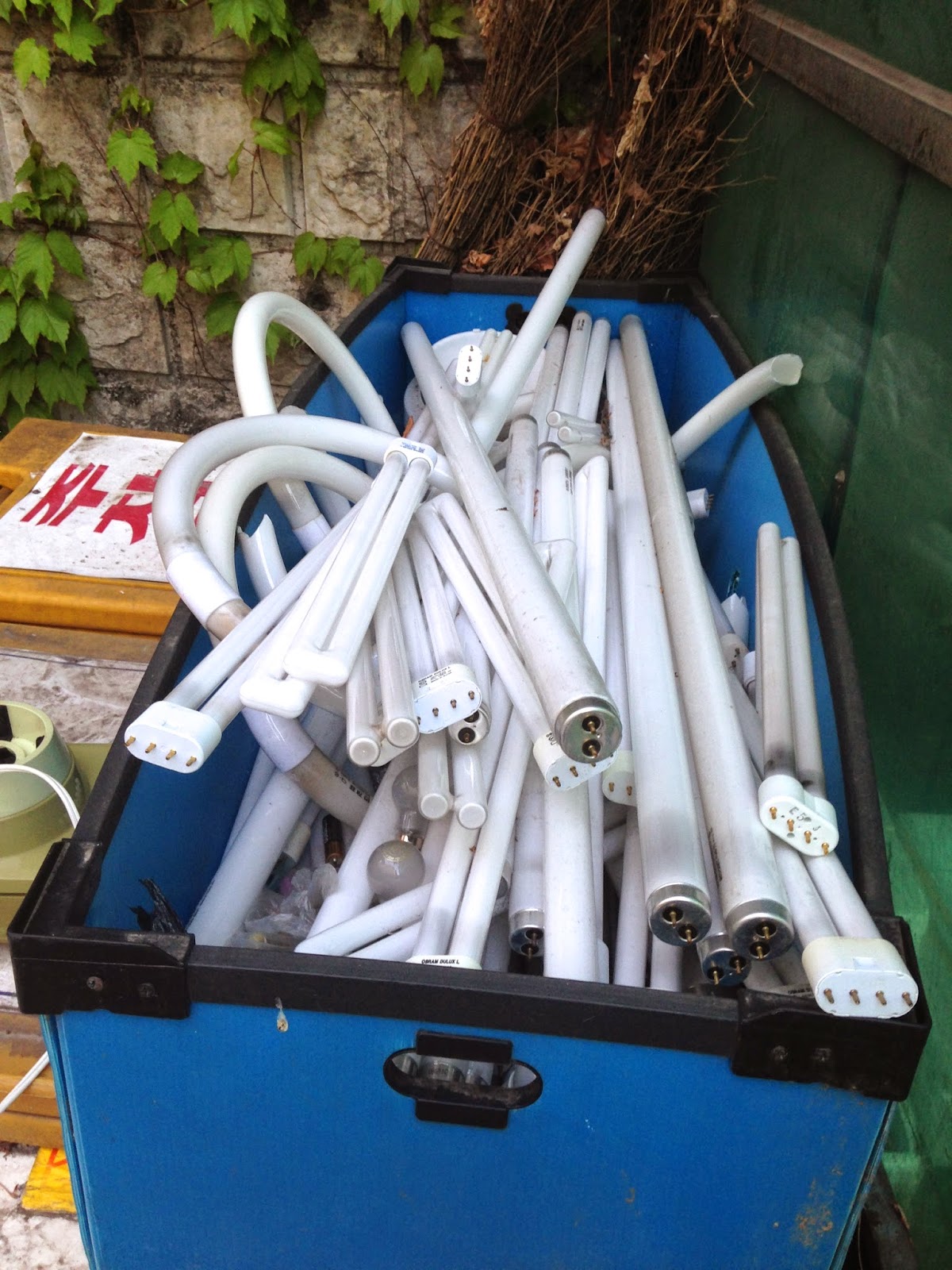 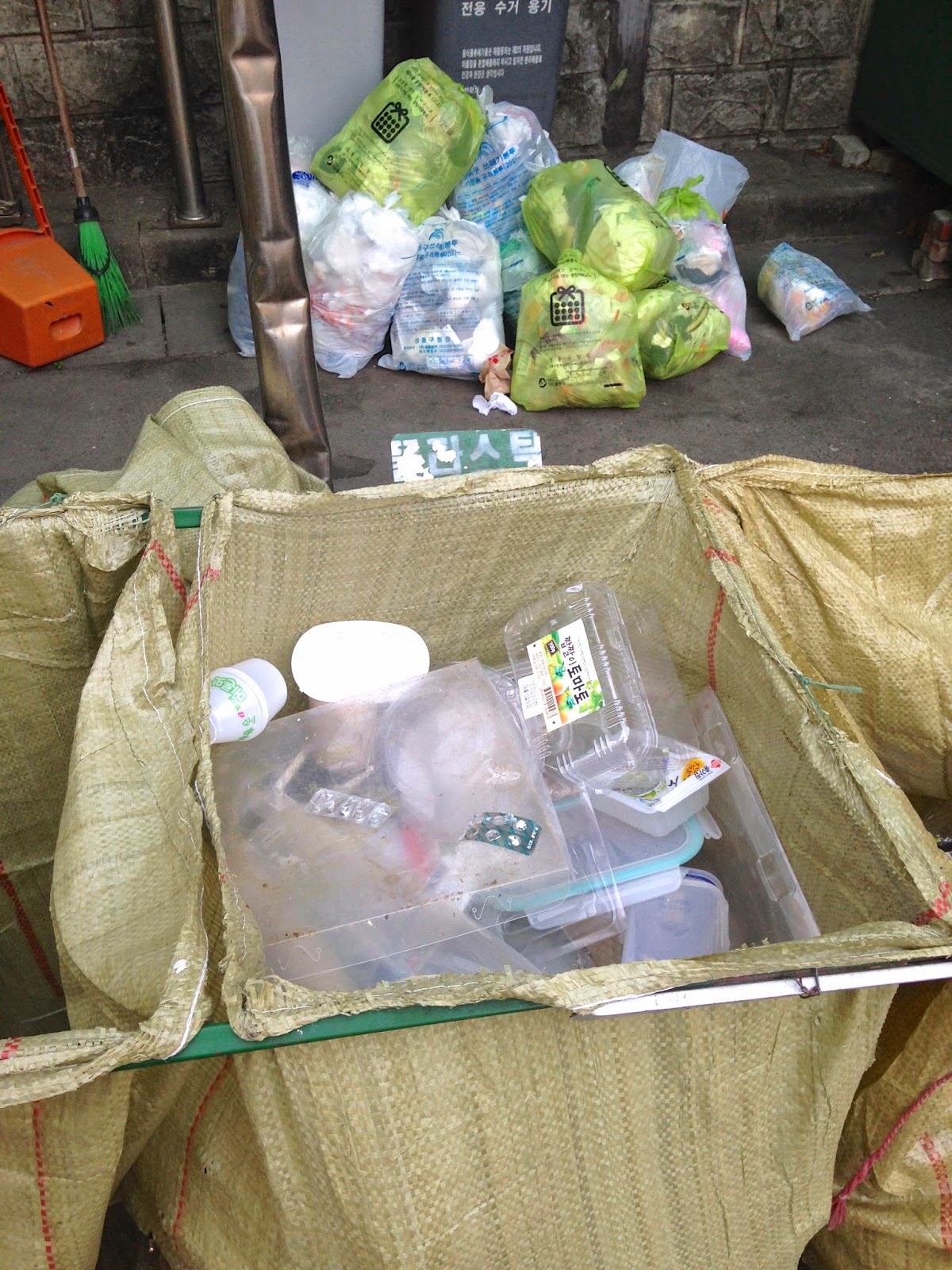 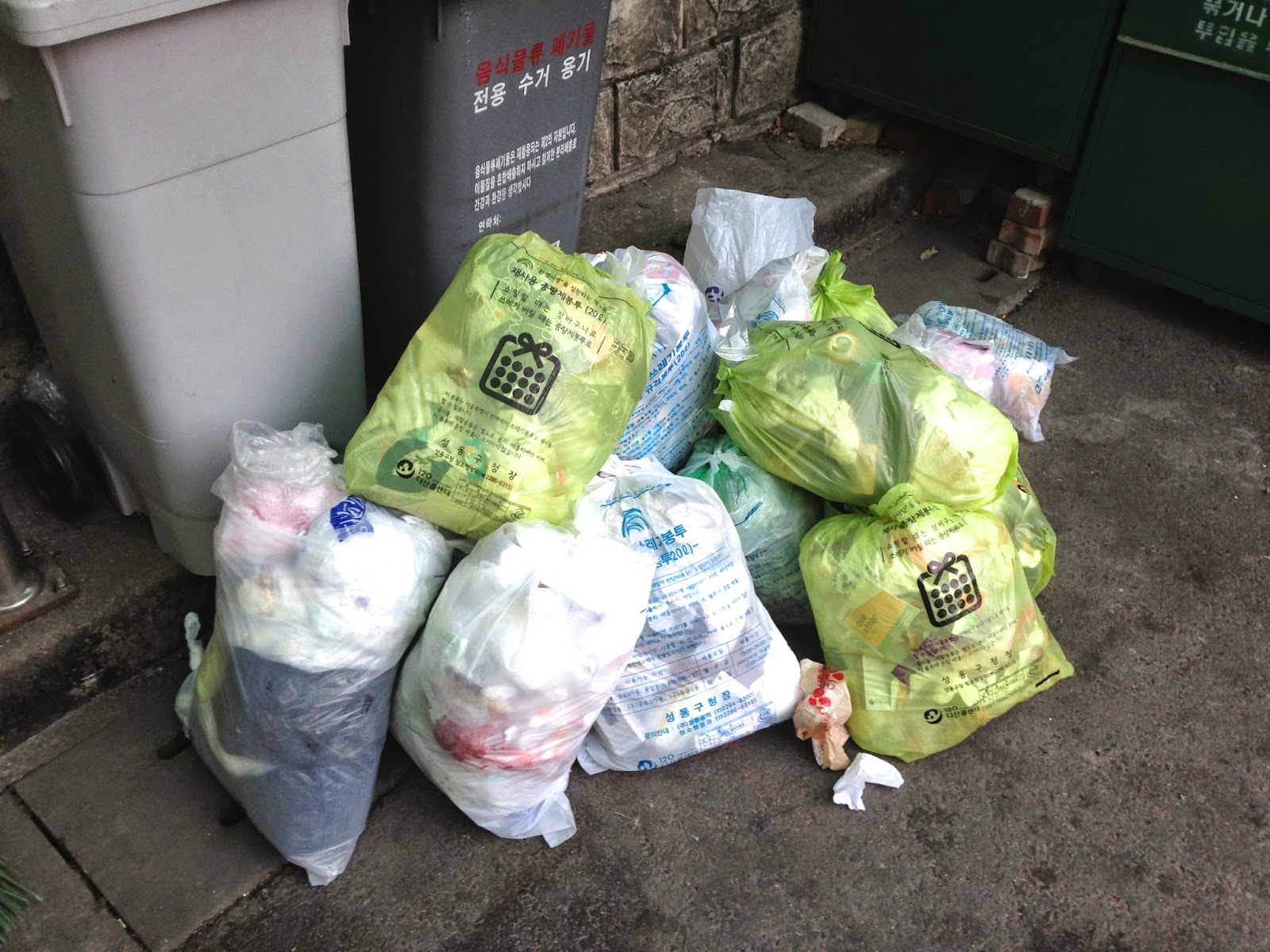 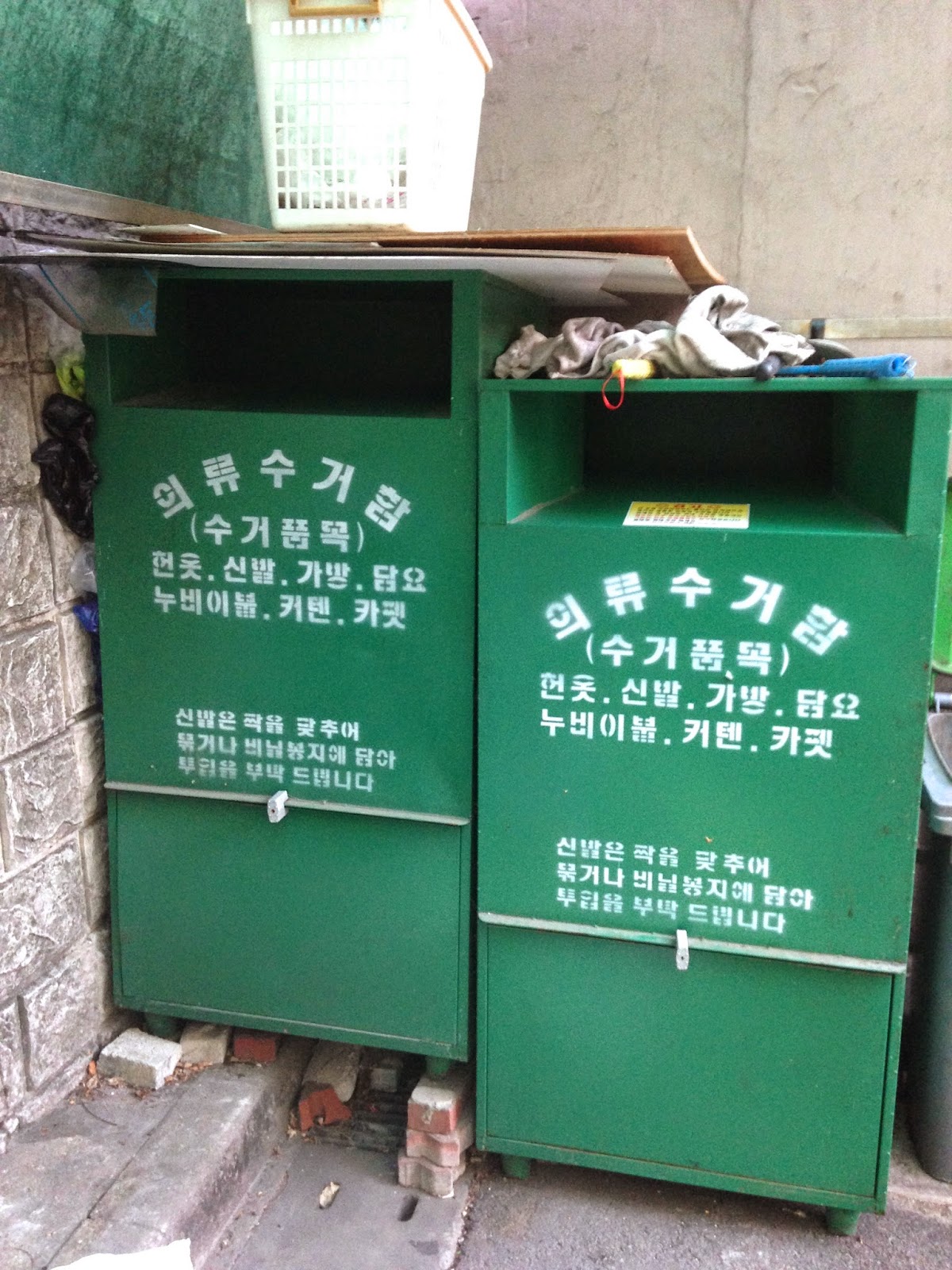 Clothing (here, a guy comes around and sifts through the stuff to recover anything can be donated). 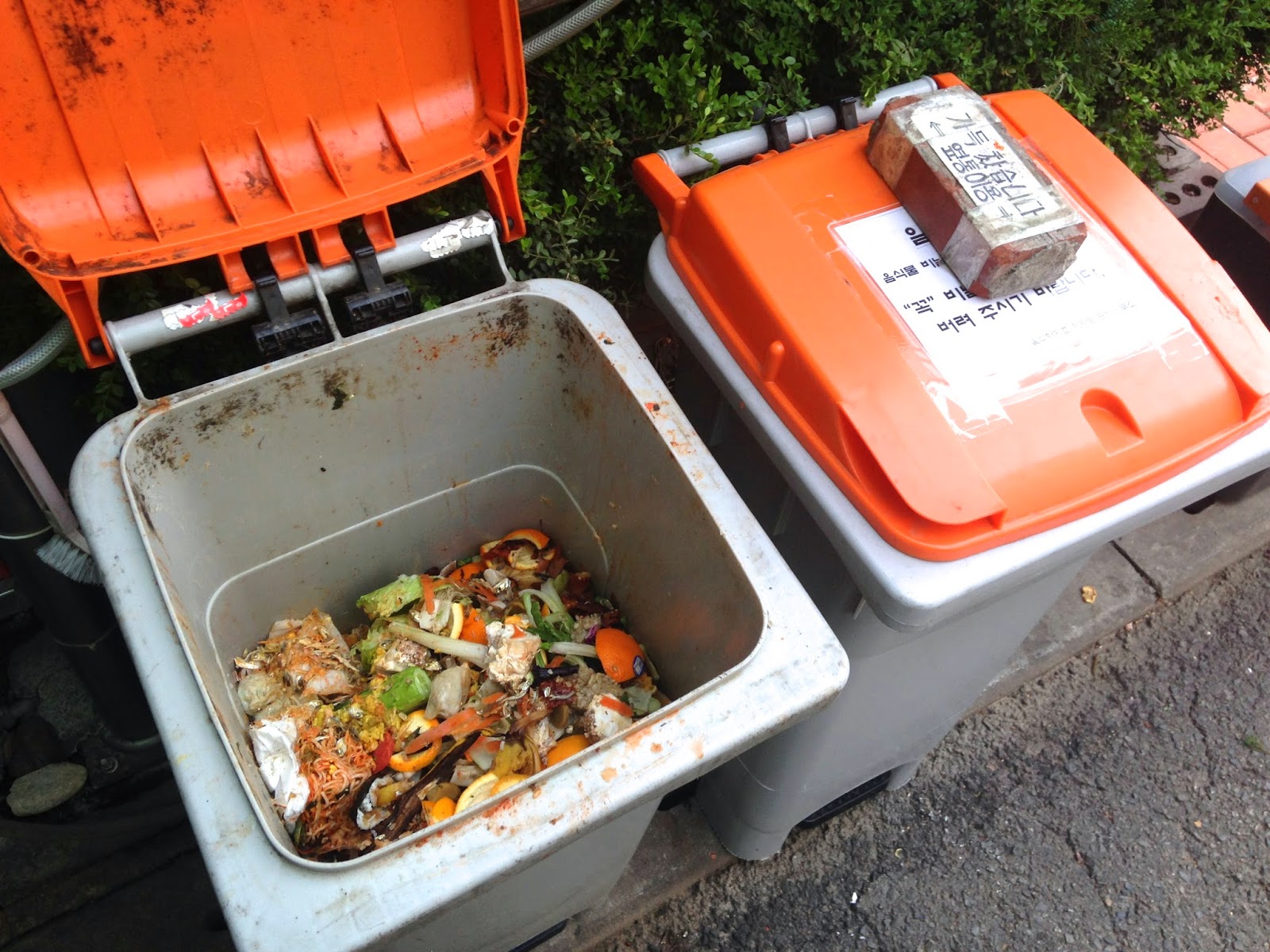 Food waste (the city is now piloting a new device in other districts that somehow weighs the food and charges a fee) (supposedly fed to pigs). 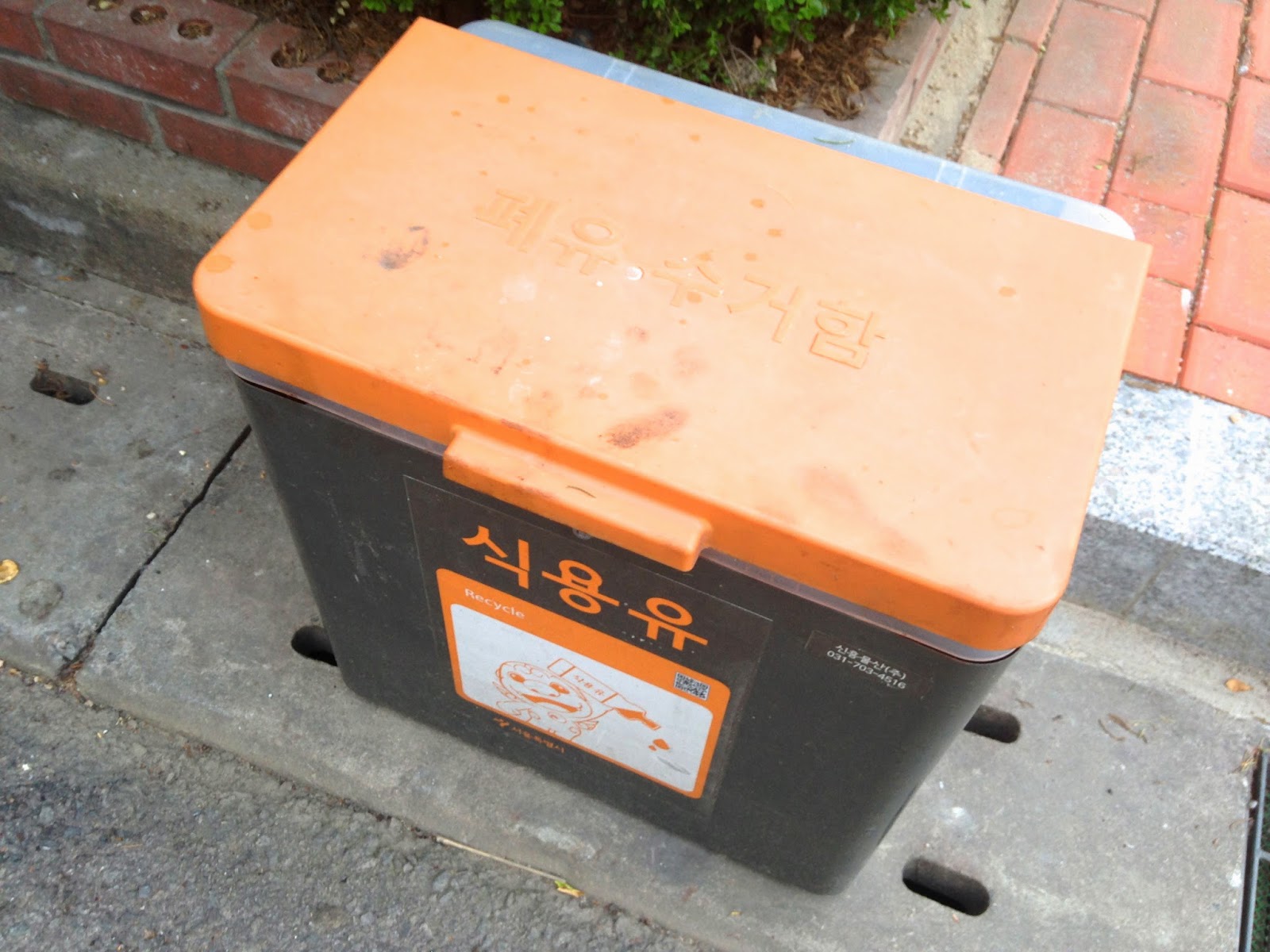 
So long as I was playing homemaker, I made pasta with meatball mash sauce for dinner, Momo's favorite.