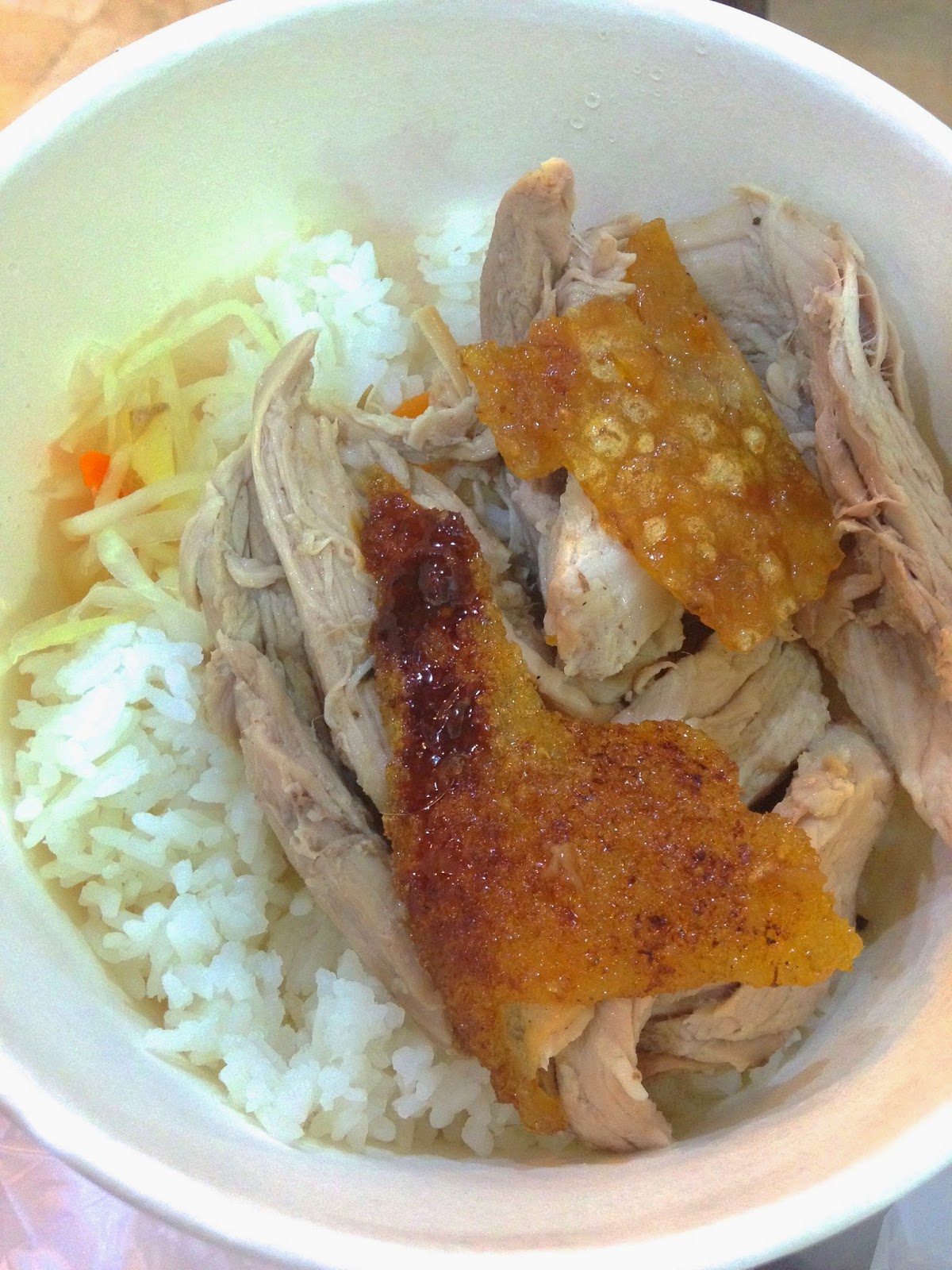 with the Wife and Dominic

And so our holiday came to an end.  All too soon, not soon enough.

Utterly spent, we squeezed every ounce of fun from the opportunity.  The best part was seeing the bewildered look of happiness on Ian's face the entire time, incapable at an early age of comprehending how such sustained delight were possible--exactly how I must've looked in Singapore (see generally 4.267 Chicken Rice).  He'd wake up in the morning, look around, see the hotel room, blink, then giggle in glee that, yes, oh yeah, baby, we're doing it again.  Dominic, on the other hand, took a more fatalistic view, knowing how sad he'd be when it was time to leave, counting down the days, growing more glum every morning.  In any case, we all had mindless fun during the actual playing. 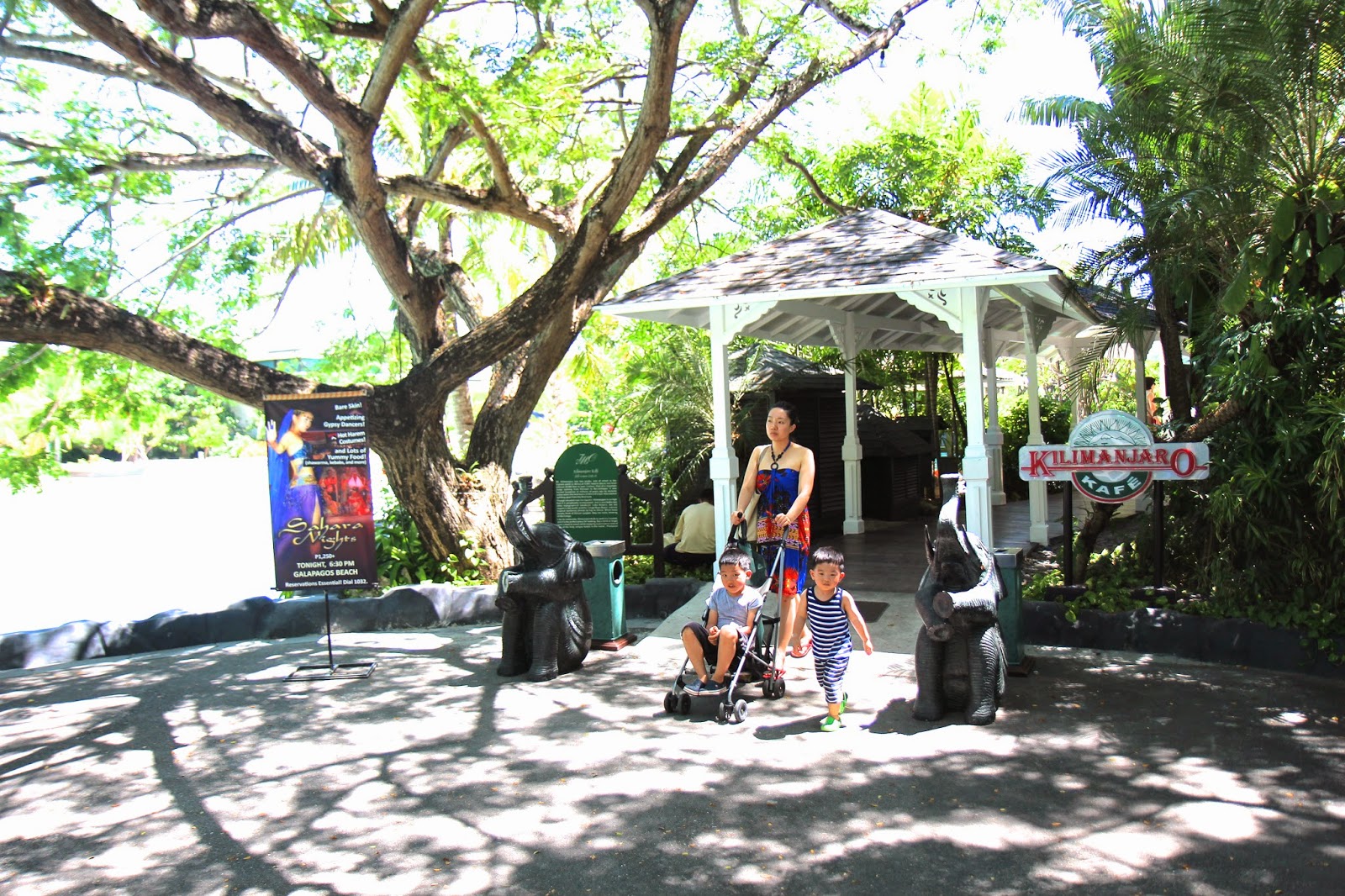 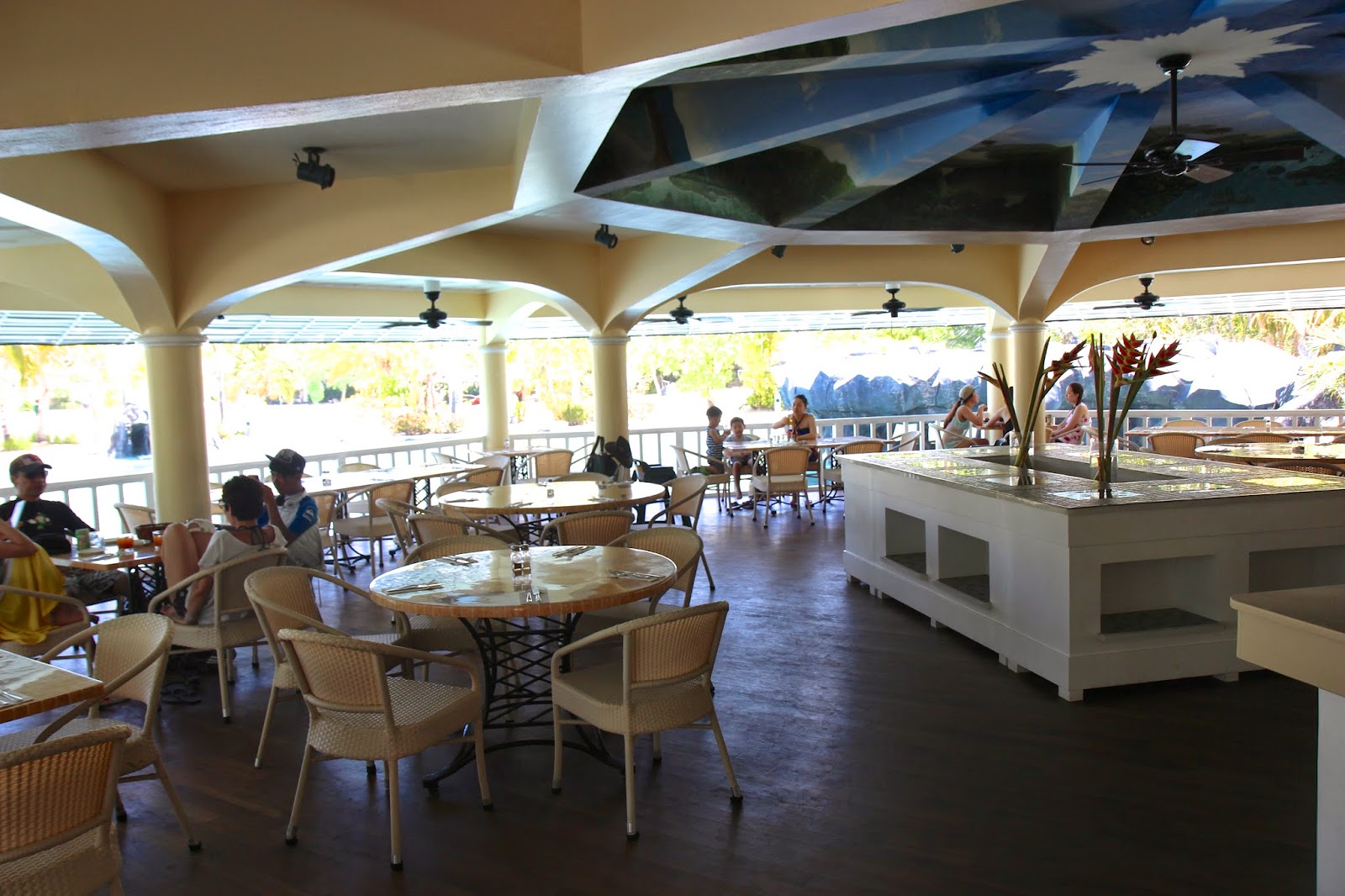 Following yesterday's successful lunch at Kilimanjaro Kafé, we gave the place another shot for our final meal here.

Lechon is a Filipino pork dish.  It's whole pig, spit-roasted over low coals for several hours, then chopped into pieces.  The marinade/seasoning/sauce differs dramatically depending on the region and/or the person in charge.  But so long as the whole animal is involved, it qualifies.  Often made/served on special occasions. 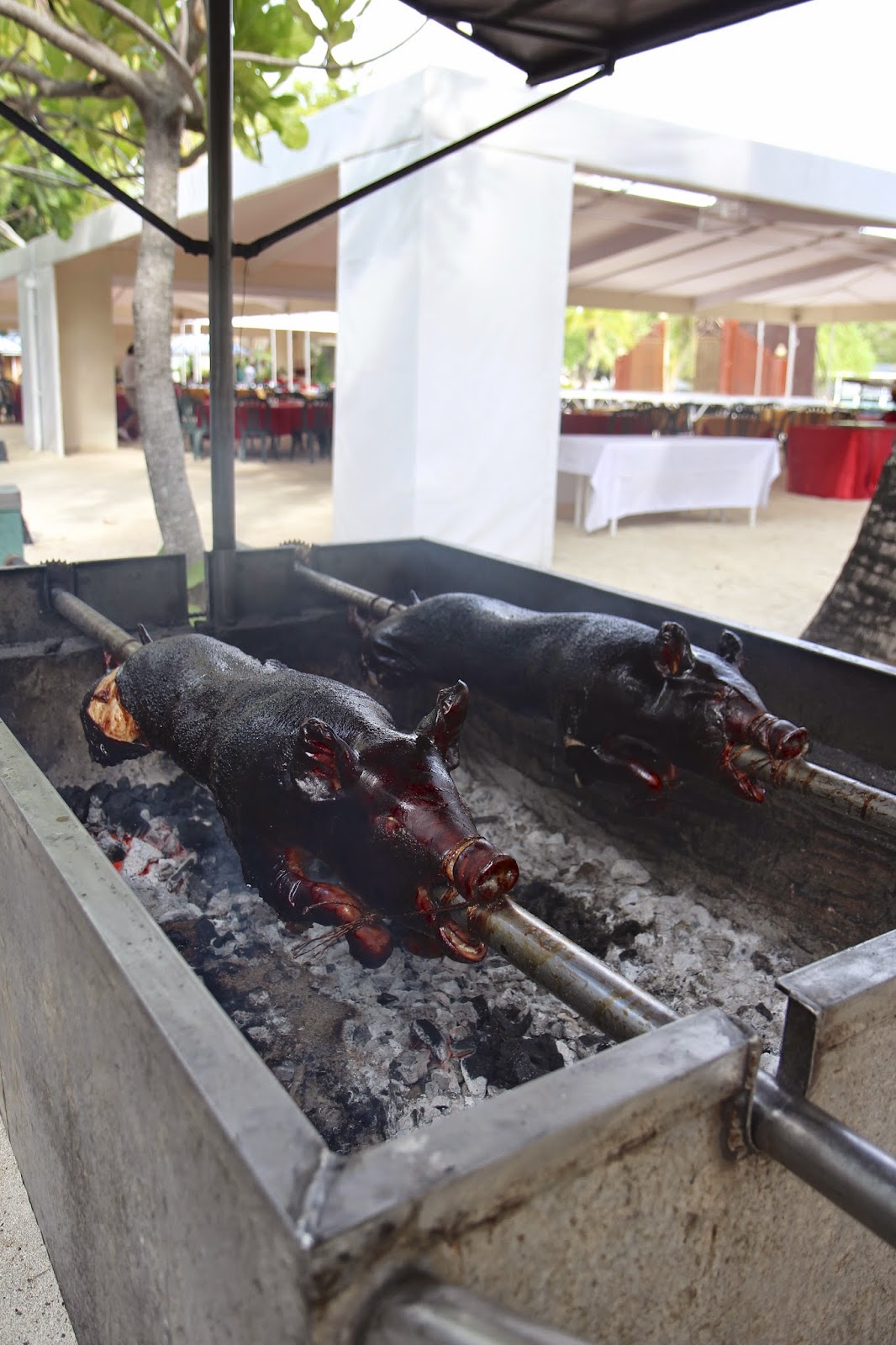 The one thing that I'd anticipated regretting from the trip was missing the daily opportunities to indulge in lechon.  Peak season, the resort had offered a themed show & buffet event every night while we were there--e.g., Brazilian Salsa Night, Arabic Belly Dancing Night--the main food feature being the lechon (yes, I know, Arabs don't eat pork), slow-cooked, right there out in the open for everyone to see, throughout the day.  However, the deal was a buffet: 1,600 pesos per adult, 800 pesos per child (between 2-10), so we would've had to shell out a total of 4,000 pesos (about 100 USD) for the privilege; we declined.  But not without a sigh. 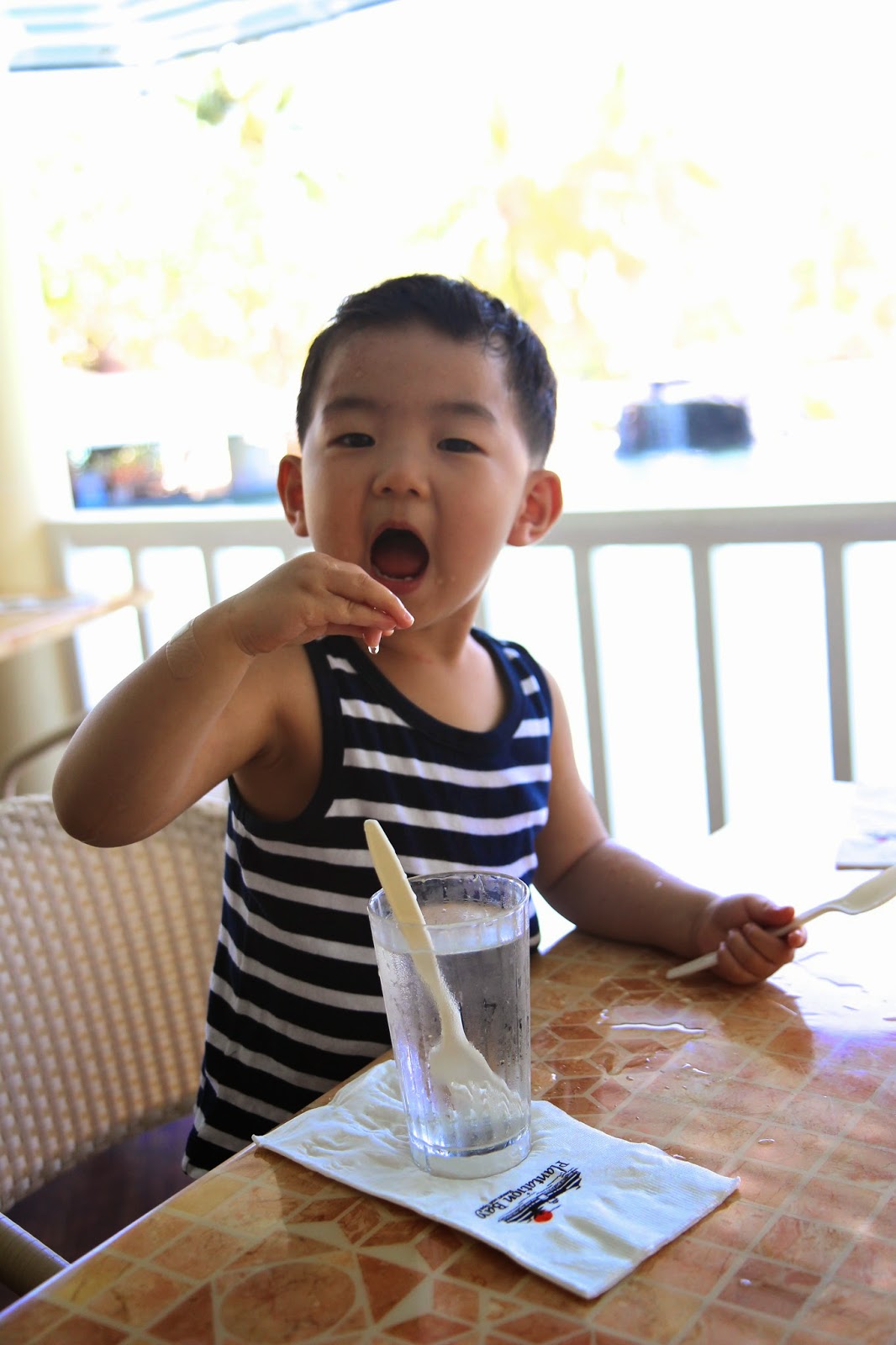 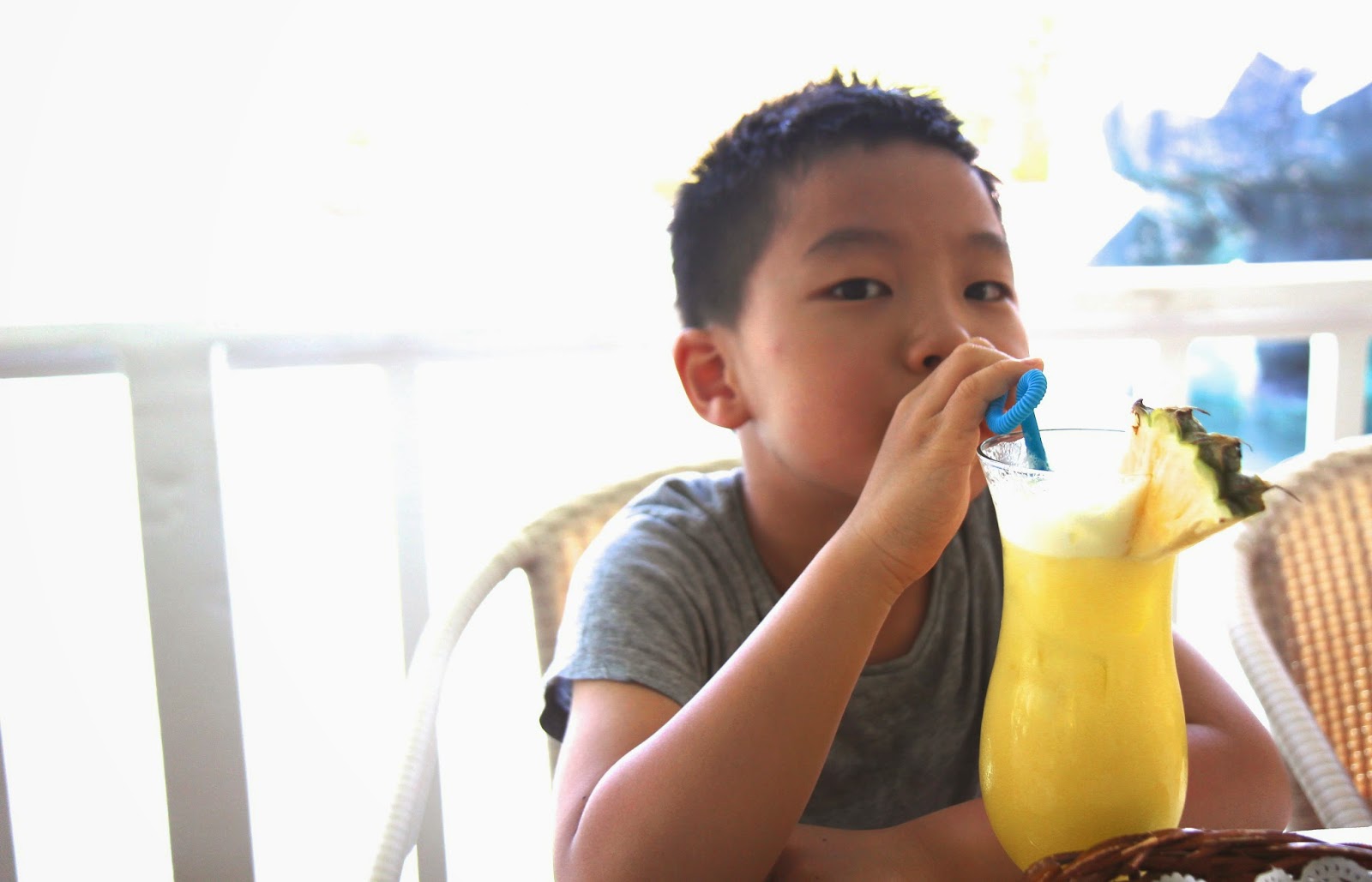 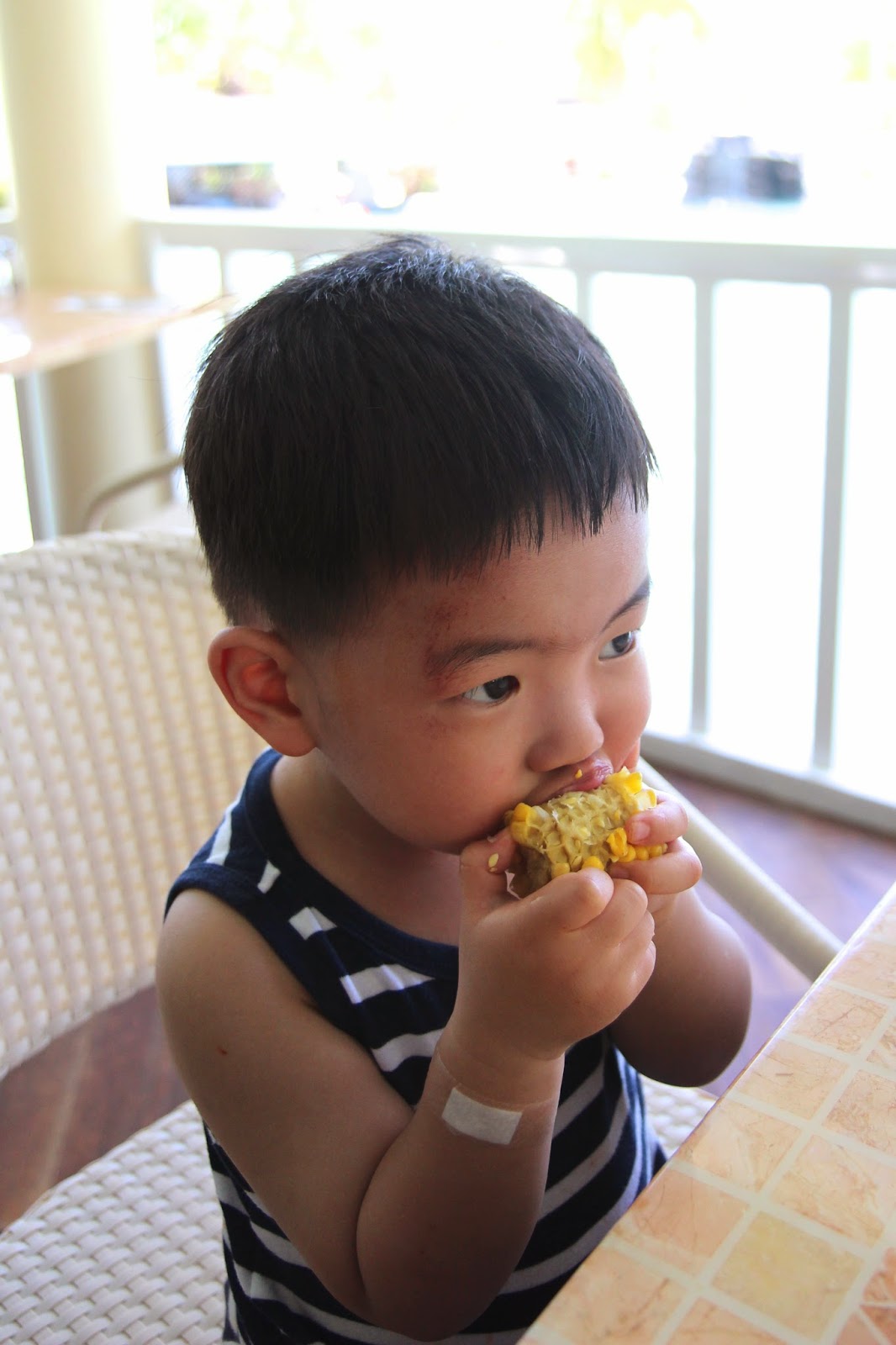 Momo liked the corn so much that we made a special request for two more ears. 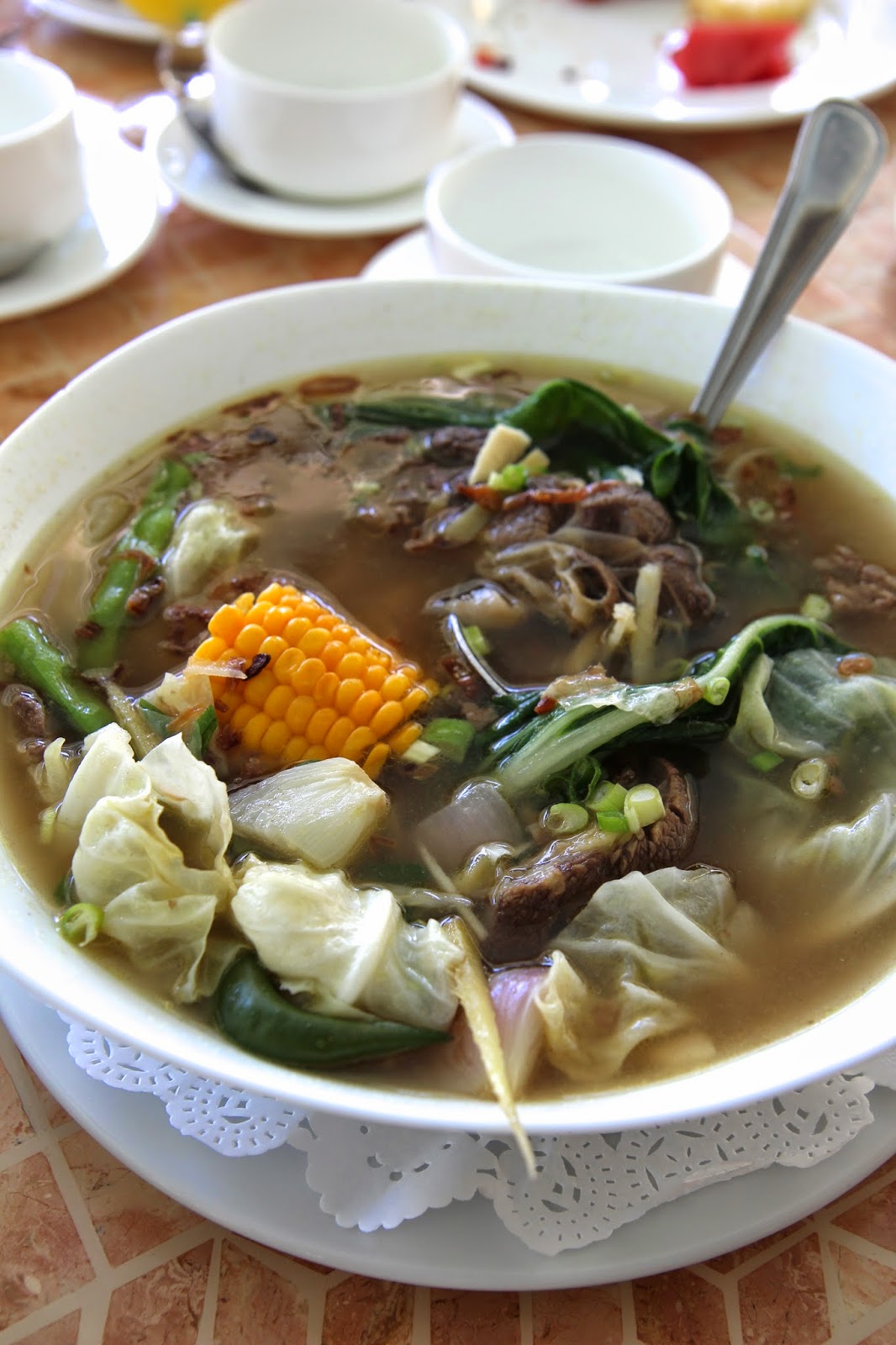 Some kind of Filipino oxtail soup (2.0)--too much ginger for me, but everyone else seemed to like it.

Zubuchon is a Filipino restaurant chain.  Founded in June 2011.  Currently 5 locations around Cebu.  Their signature item is lechon, which celebrity chef Anthony Bourdain famously referred to as "Best pig ... ever."*  In the international departure lounge at the airport, the lechon may be ordered to consume on the spot, wrapped to go (e.g., for the plane), or purchased frozen in bulk.  On TripAdvisor, Zubuchon is currently ranked #17 of 338 restaurants in Cebu City. 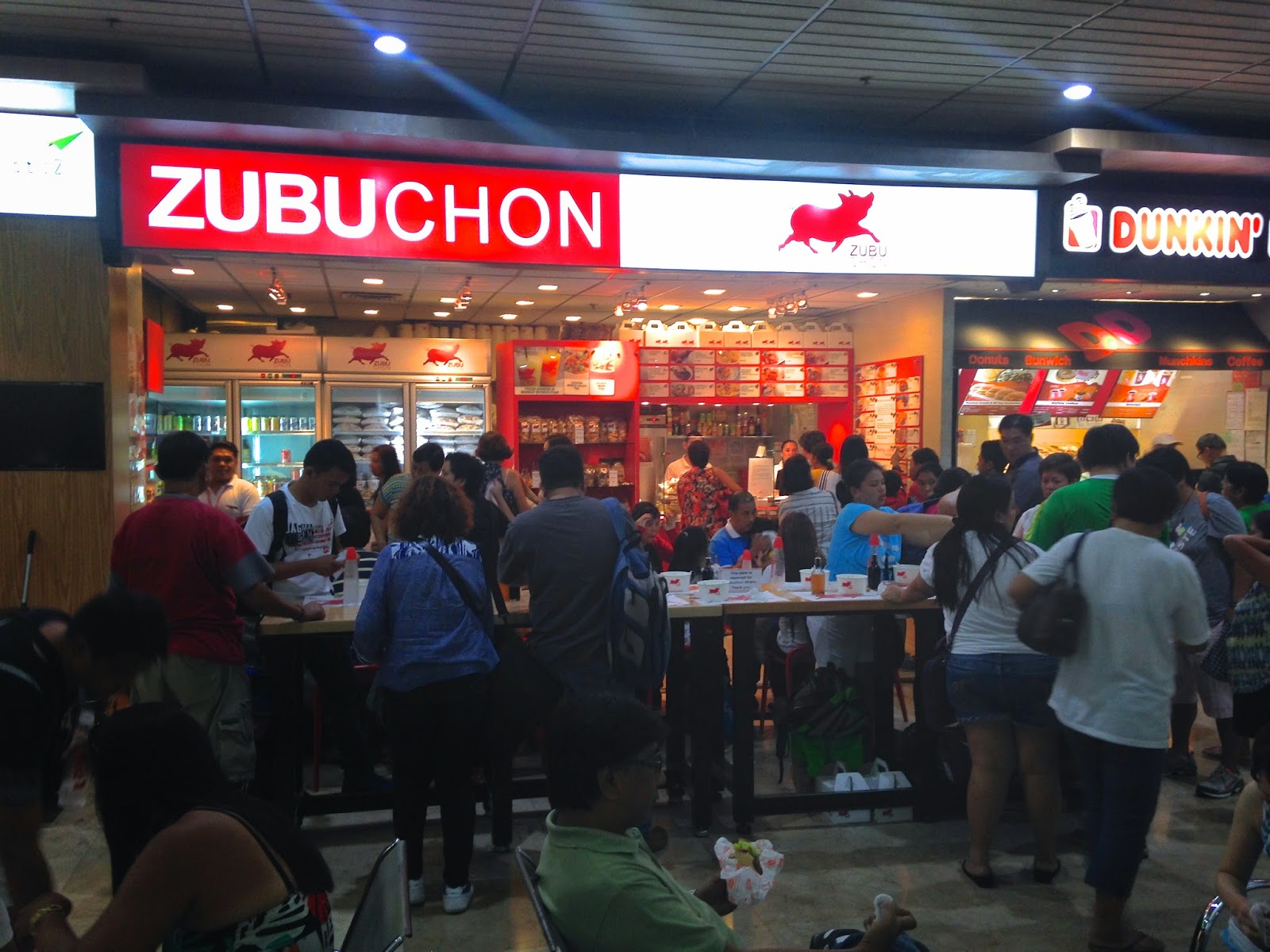 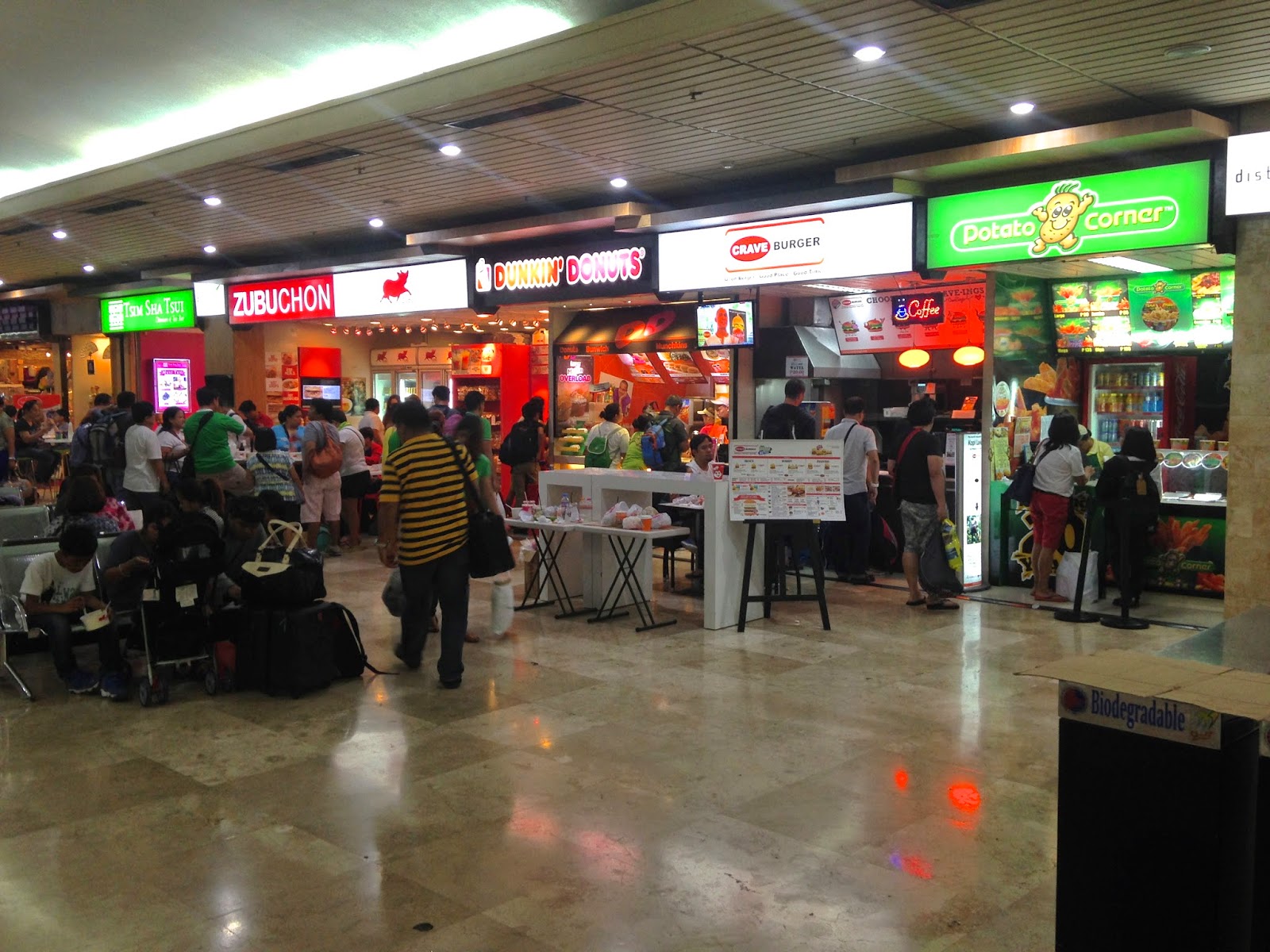 Even if Zubuchon hadn't been so enticing, the other choices were unappealing anyway. 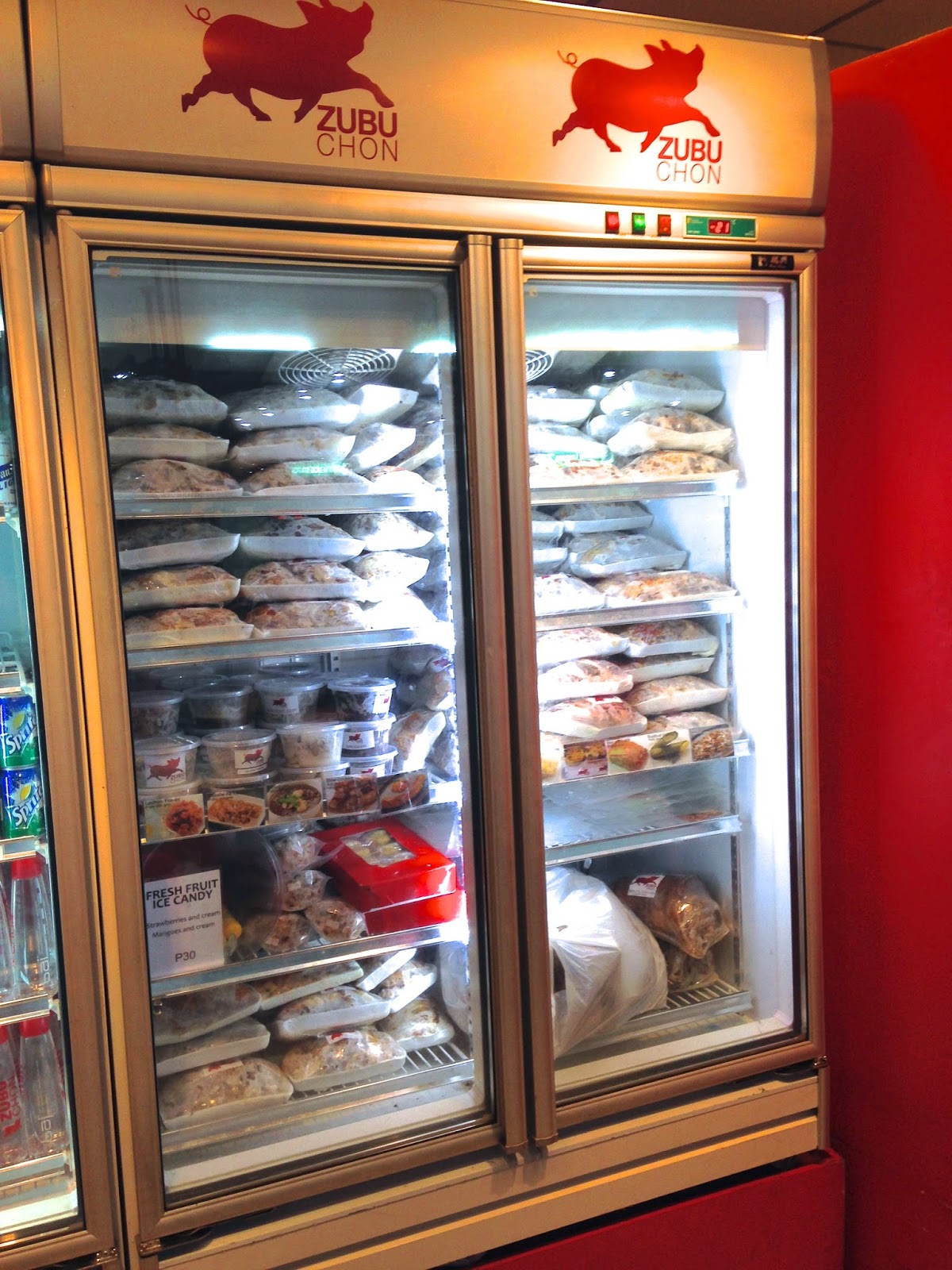 As mentioned above, they sell frozen lechon to go.

Arriving at the airport around dinnertime, Zubuchon immediately became a no-brainer.  Although I hadn't heard of it until that moment--*actually, I wrote about the "best pig" episode in a prior post (see generally 3.243 Seafood Platter...), but I can't recall anything about Zubuchon--the stall was the only one in the departure lounge food court that had customers--not just customers, crowds of customers. 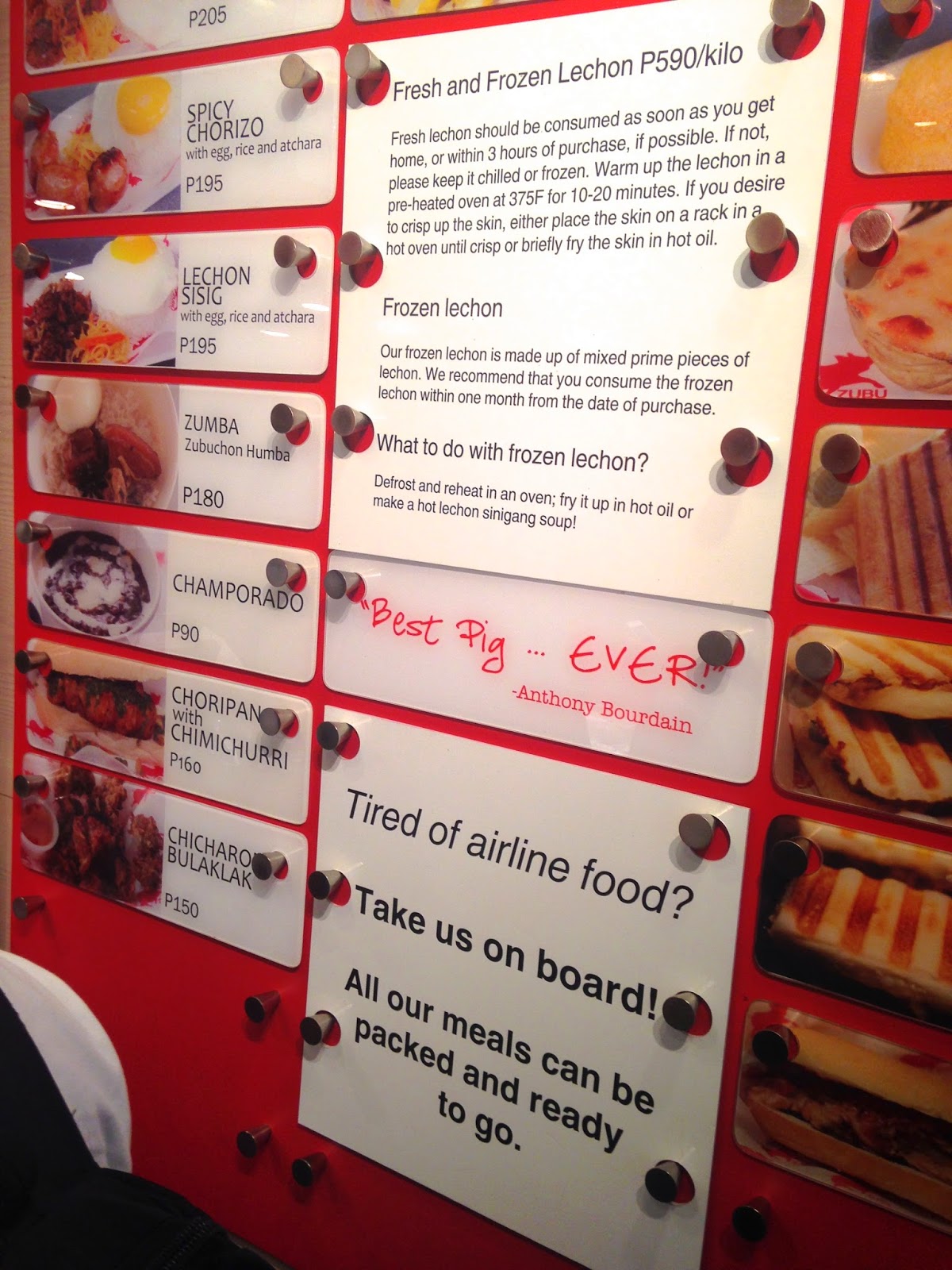 The lechon was awesome.  Texturally, the meat was meltingly tender, with crispy skin to provide a nice counterpoint.  In flavor, it was perfectly sweet and salty, intensely porky in the best sense, not at all porky in the worst sense.  With all due respect to Mr Bourdain's expertise, I didn't find it to be the best pig ever, but I could appreciate its universal appeal.  Indeed, whether as a Filipino rice topping, or as a Korean anju, or an American sandwich stuffer, or whatever, the Zubuchon lechon is a dish that anyone can enjoy (except Arabs, or Jews, or vegetarians). 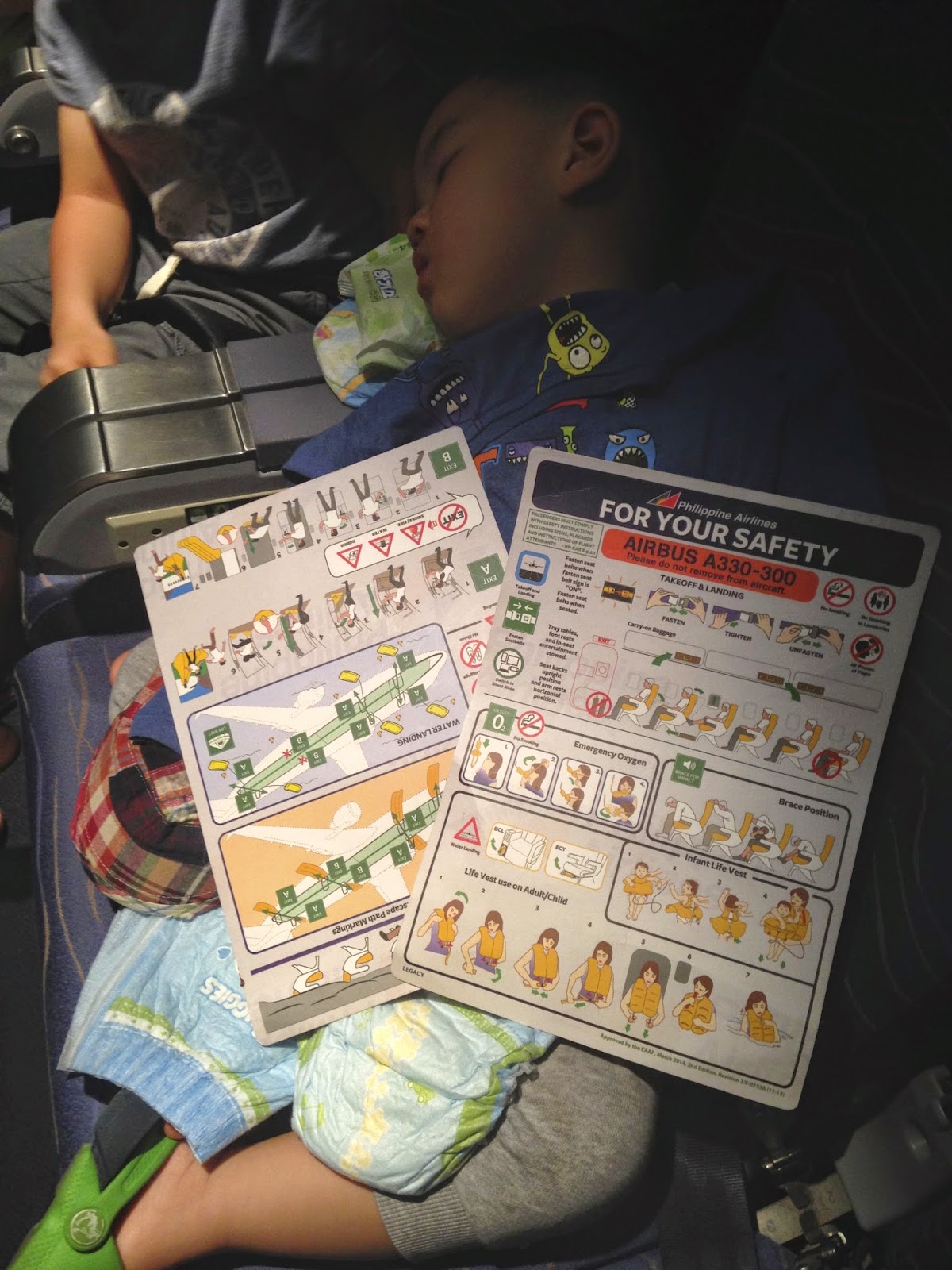 Without any aforethought, we got on the plane, dressed in shorts and t-shirts; unfortunately, the plane didn't have any blankets or pillows; fortunately, a flight attendant took pity and lent us his suit jacket.