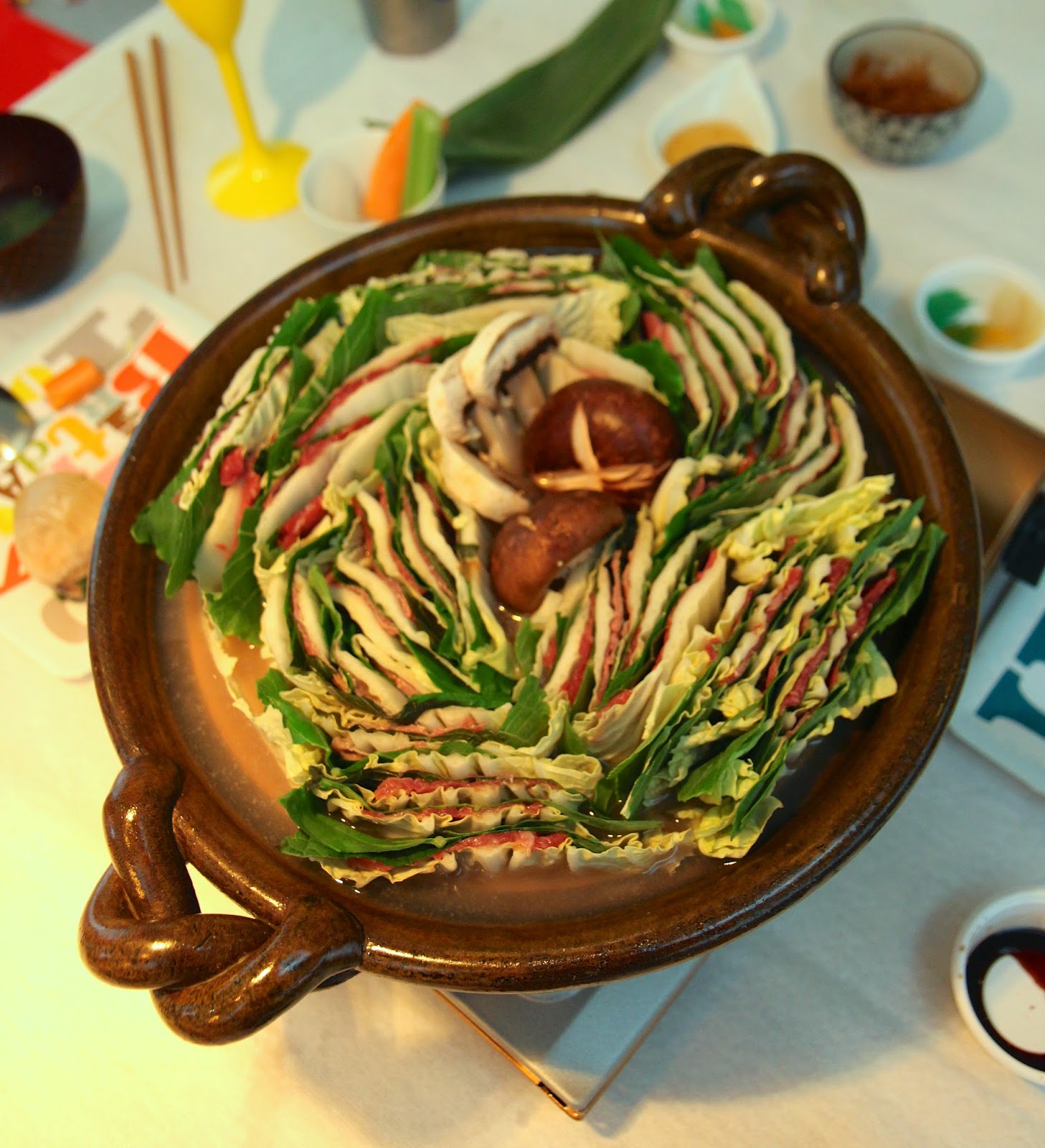 with the family and the camping crew

MtG is opening a fish & chips restaurant.  Located in Gyeongridan. Yet to be named.  Currently under constructed.  Soft opening projected for the end of June.  In collaboration with Yong I, a member of our camping crew.

With nothing better to do in the early afternoon, Dominic and I dropped by the construction site to see how things were progressing.  Looking good.  Can't wait to try the goods next month. 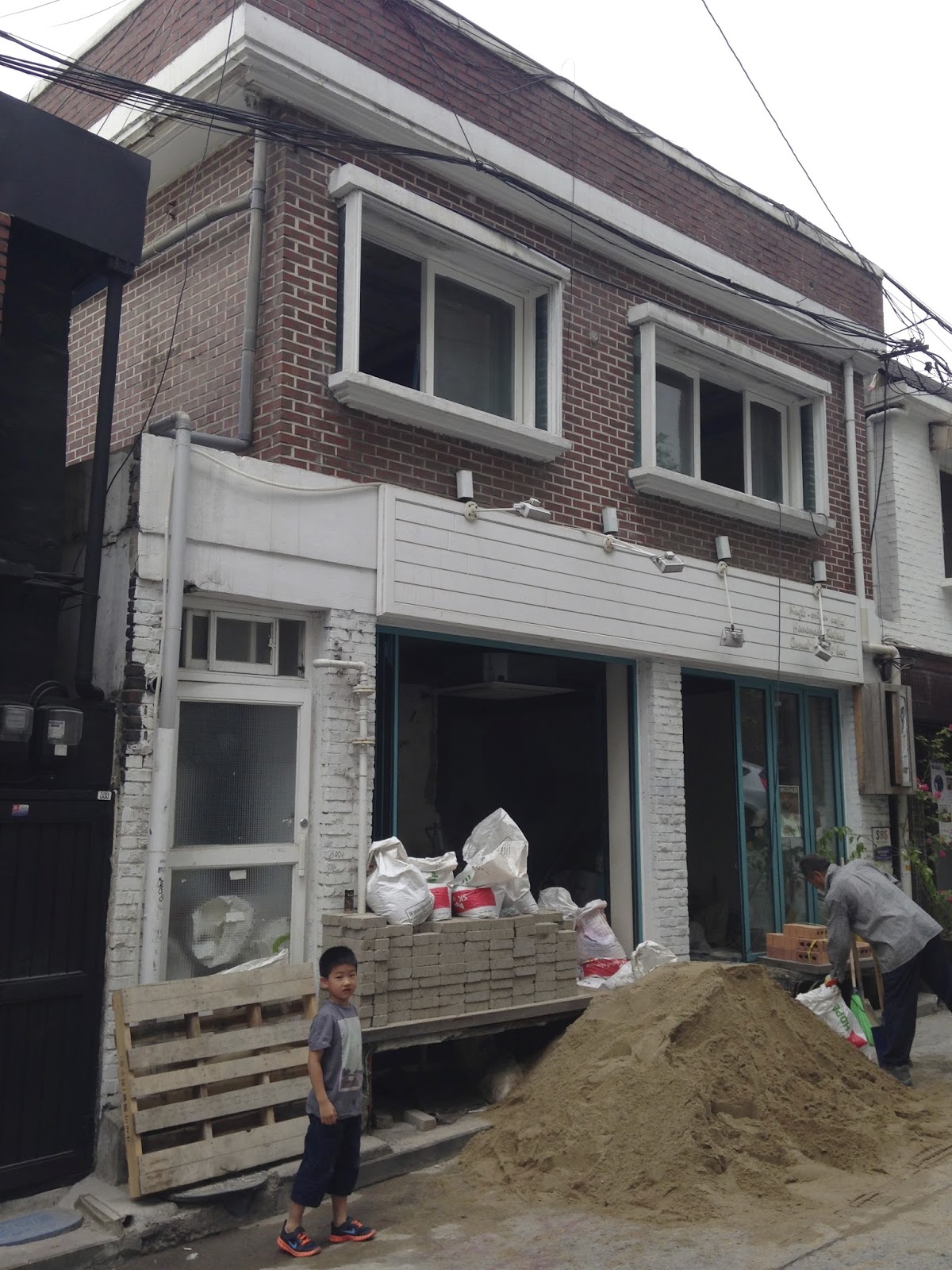 They ended up renting out an entire building... 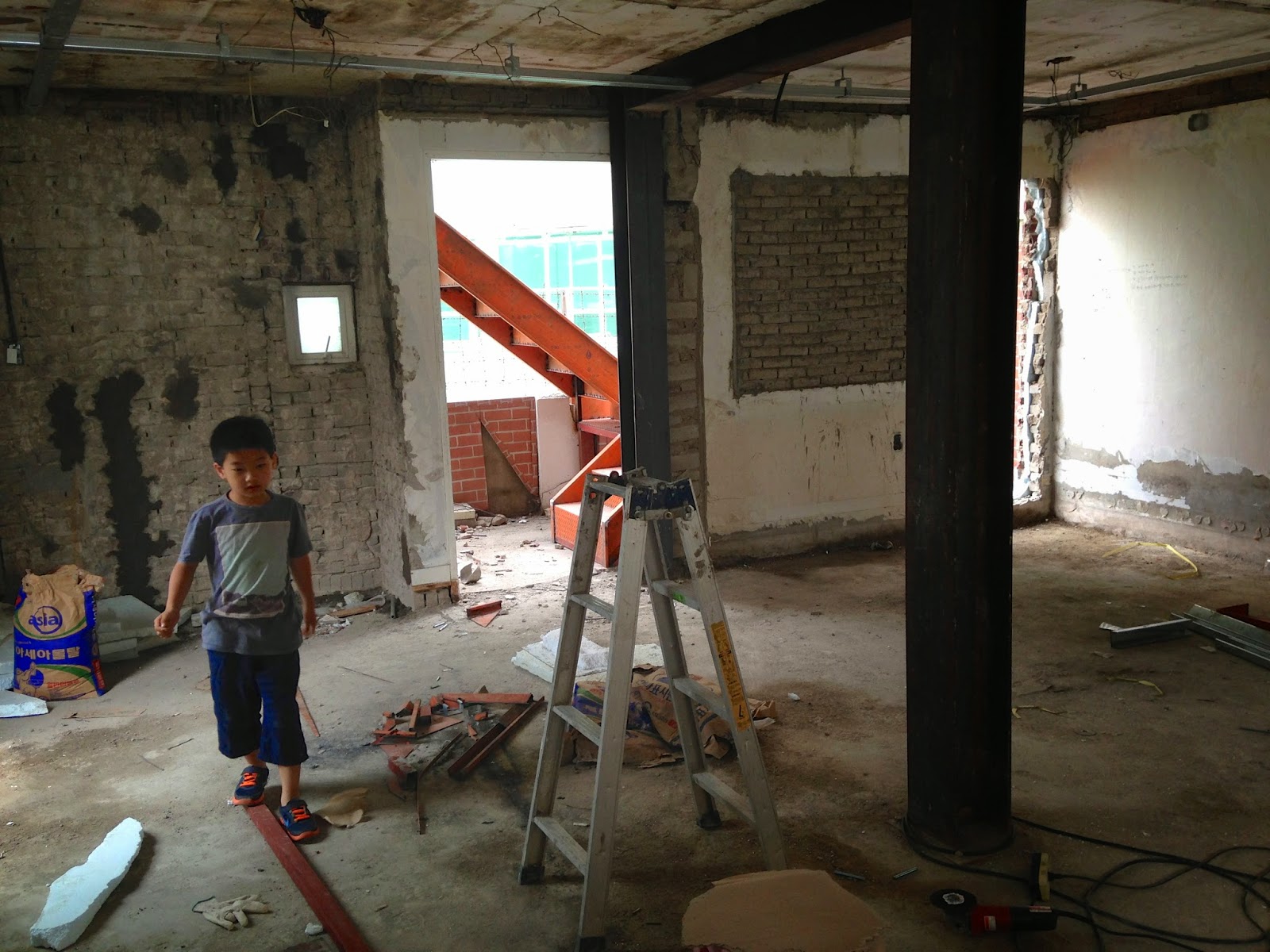 ...which includes a basement for office space, first and second floors for dining... 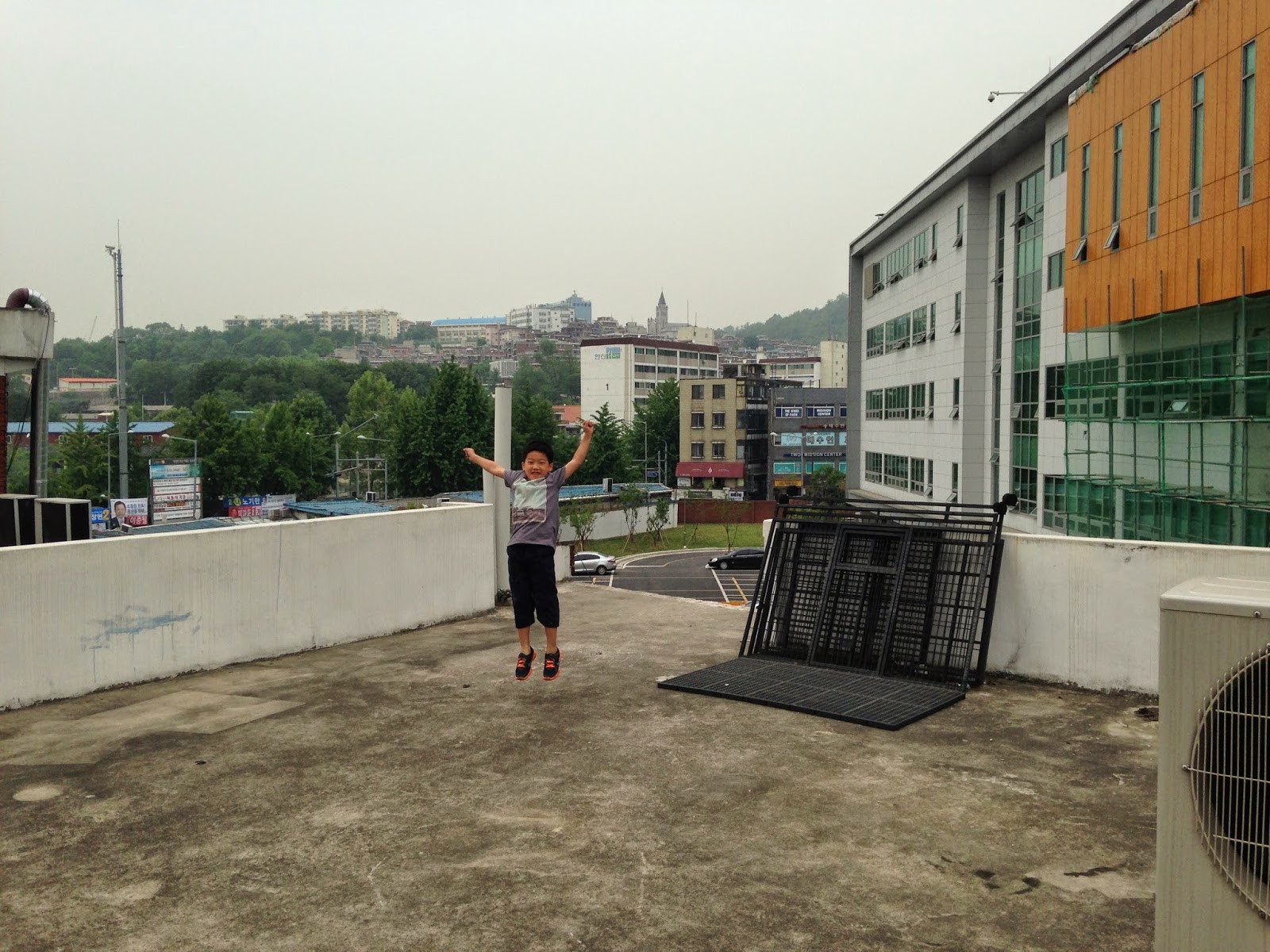 ...and a rooftop for grilling and/or drinking, for customers and/or friends. 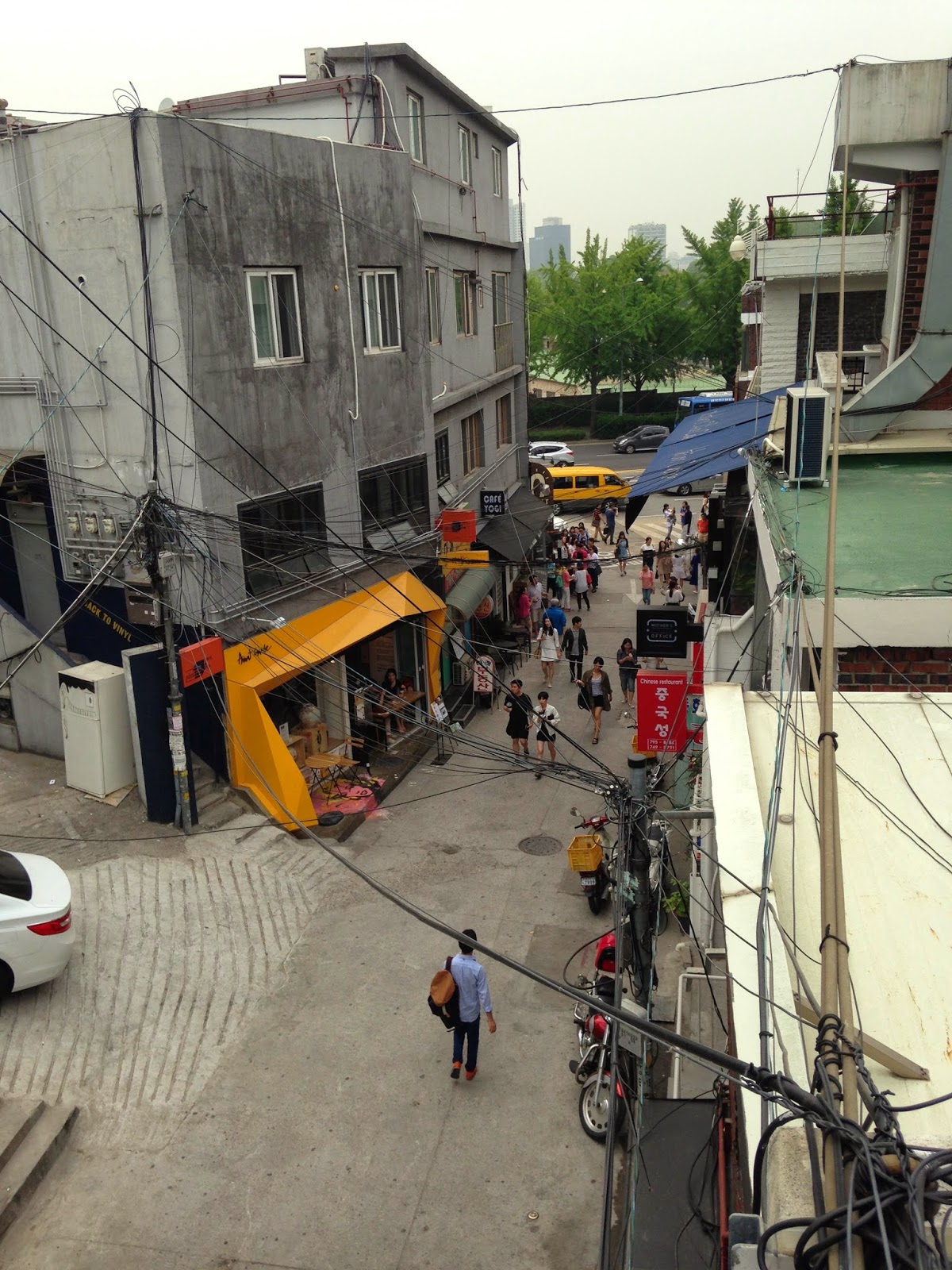 Gyeongridan, part of Itaewon, but on the other side of the Hyatt, formerly an expat enclave, but now being taken over by the locals and transformed building by building into one of the hottest neighborhoods in the city.

Later in the afternoon, the camping crew was invited over to Yong I's house to celebrate his birthday.

Dinner parties at his place are legendary, among us, because: (a) he is very passionate about cooking and enjoys trying to impress people with his culinary prowess,* so the food is very likely to be interesting at least; (b) he has some skills,** so the food is usually pretty good; and (c) he has piles of disposable income and spends it without restraint on his passions,*** like cooking, so the food is always of the highest quality. Like his house, which he designed and built from scratch... 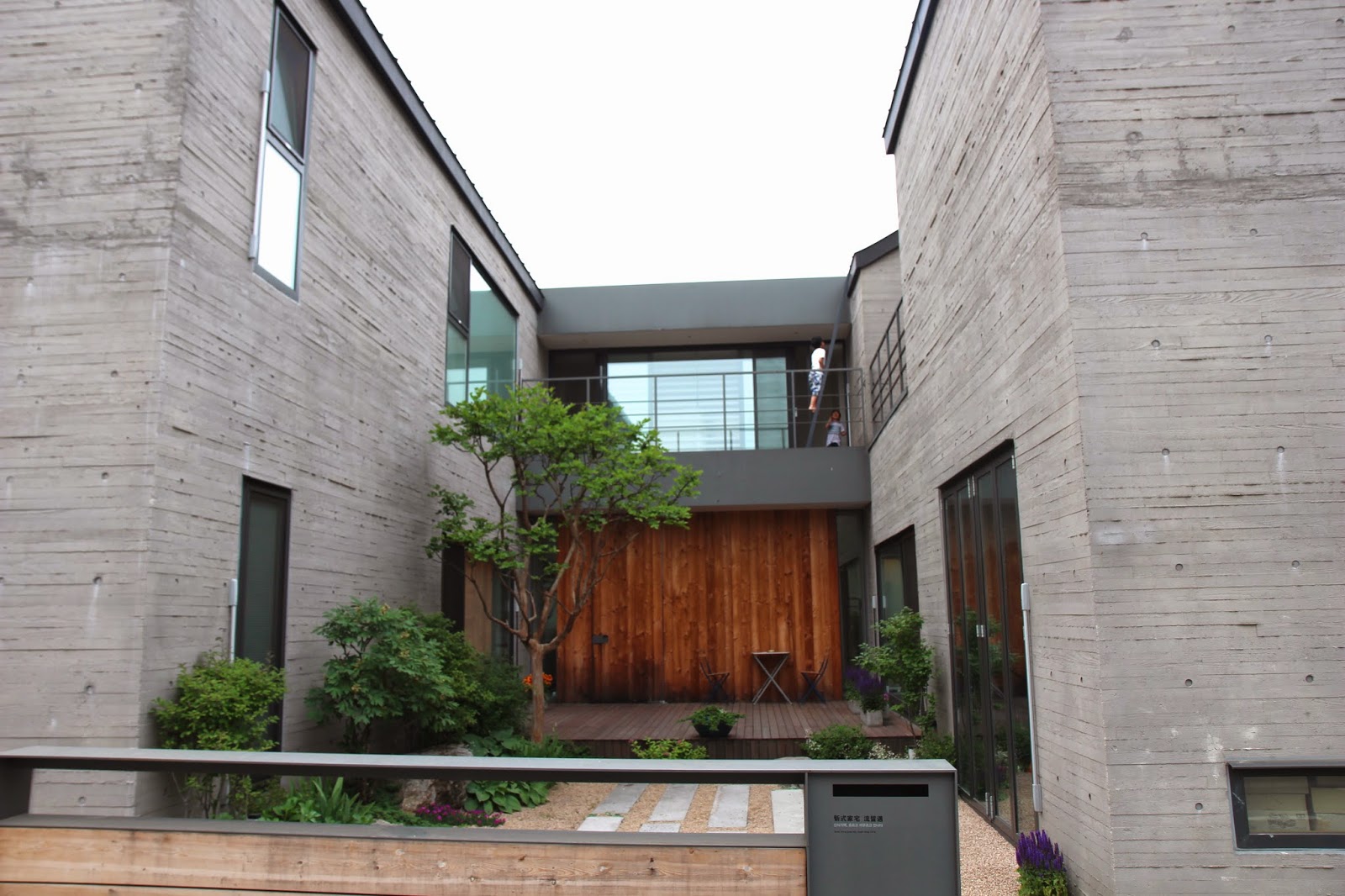 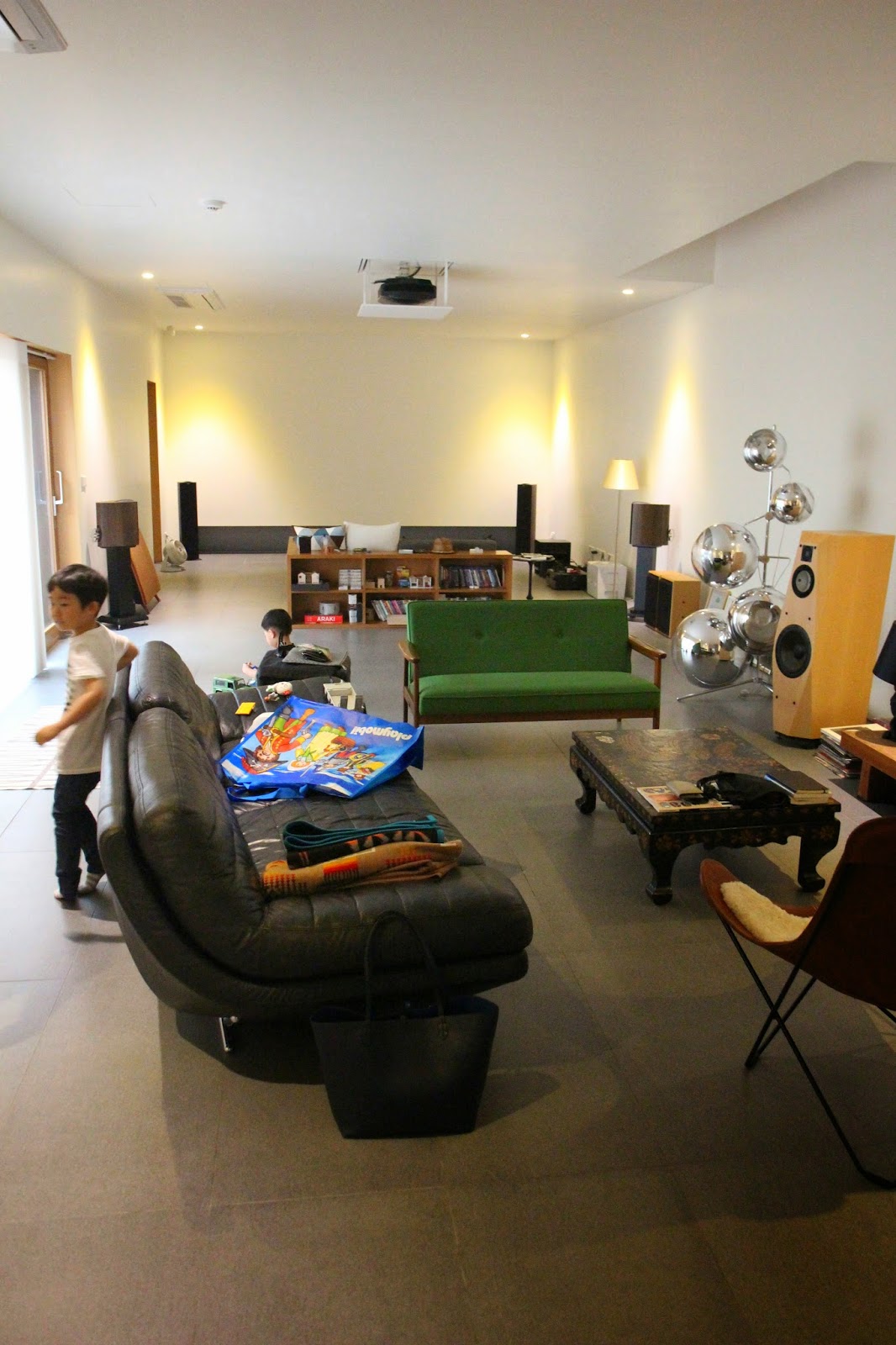 The living room, the epitome of minimalist excess... 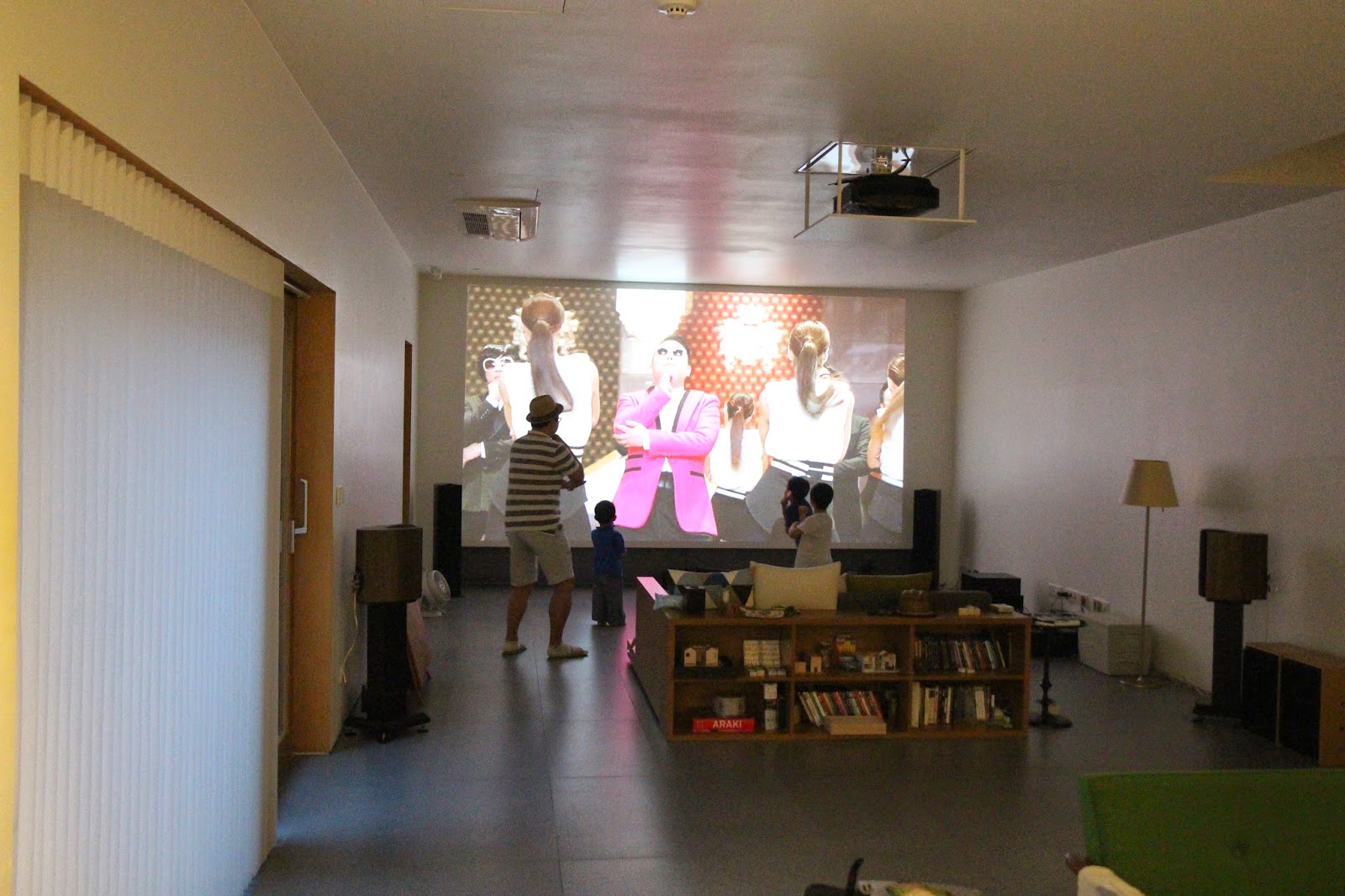 ...featuring the biggest TV that I've ever seen--technically, an ultra high-definition projector beamed onto a blank wall, but the picture is sharper than our digital TV at home. 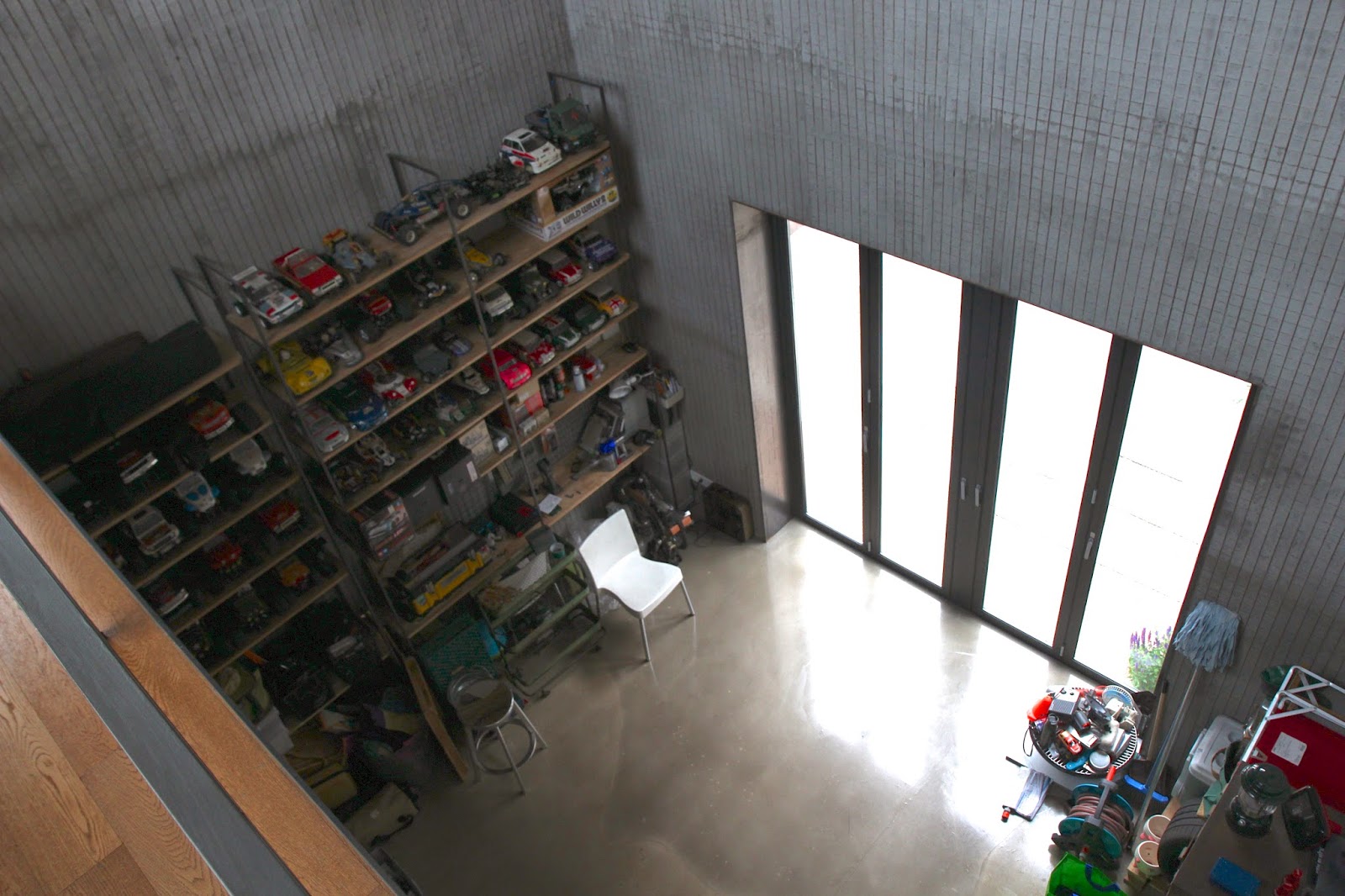 The garage, visible from the second floor balcony... 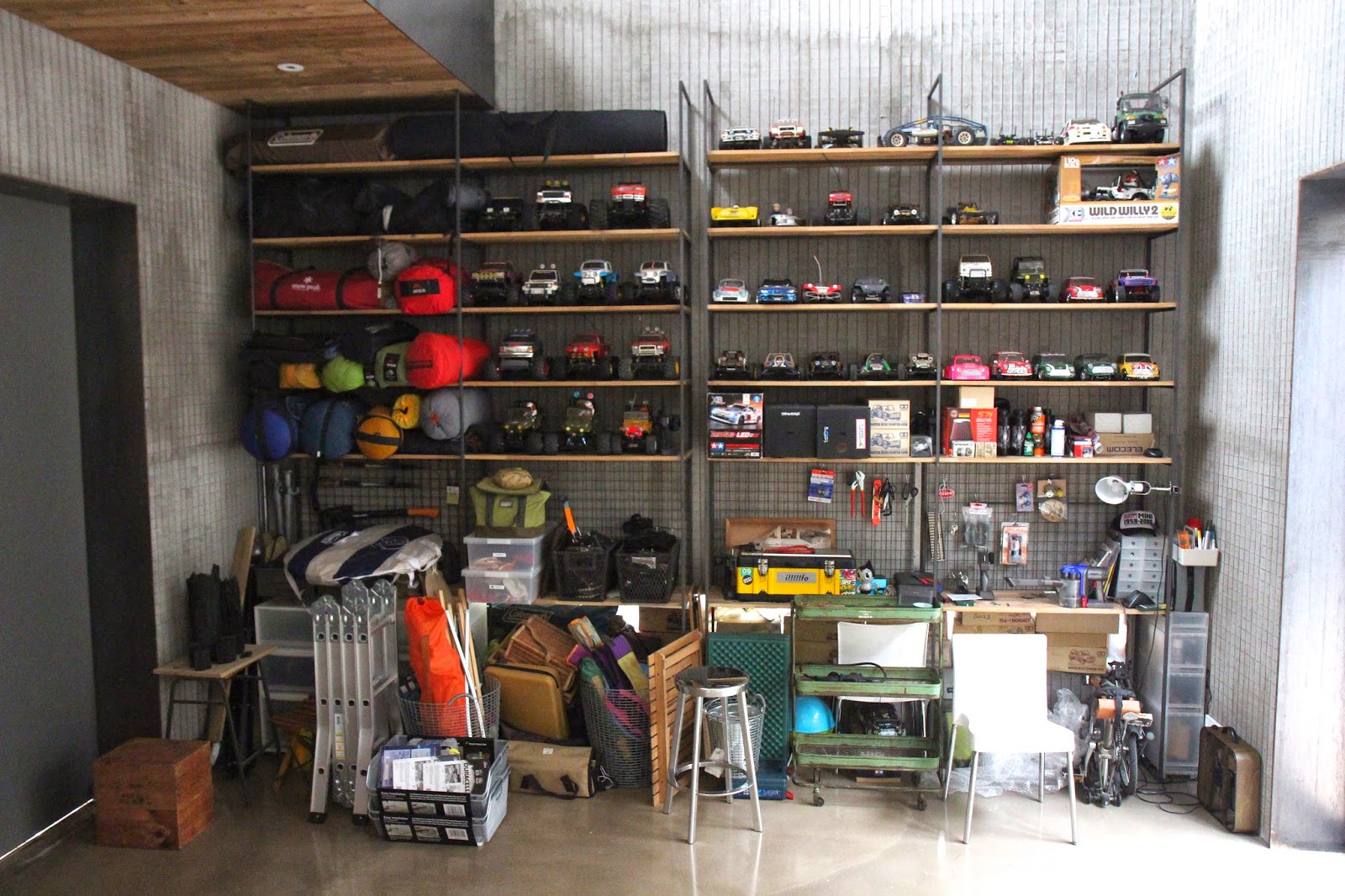 Though nothing I don't envy anything about the house or its contents (e.g., lots of toy cars and other symbols of arrested development), I wouldn't mind having a garage from which I could directly load/unload my camping gear into the car... 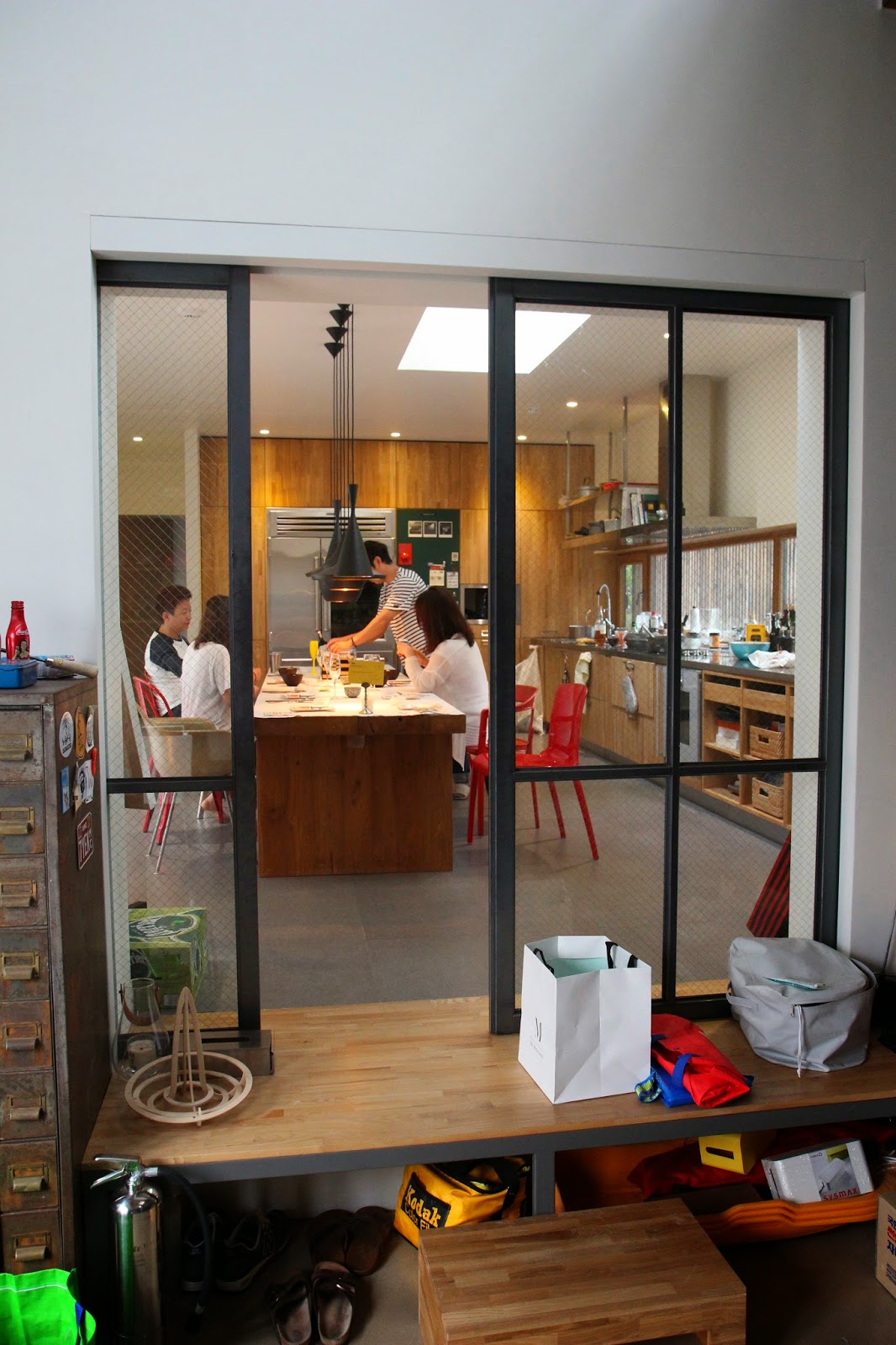 ...as well as groceries into the kitchen. 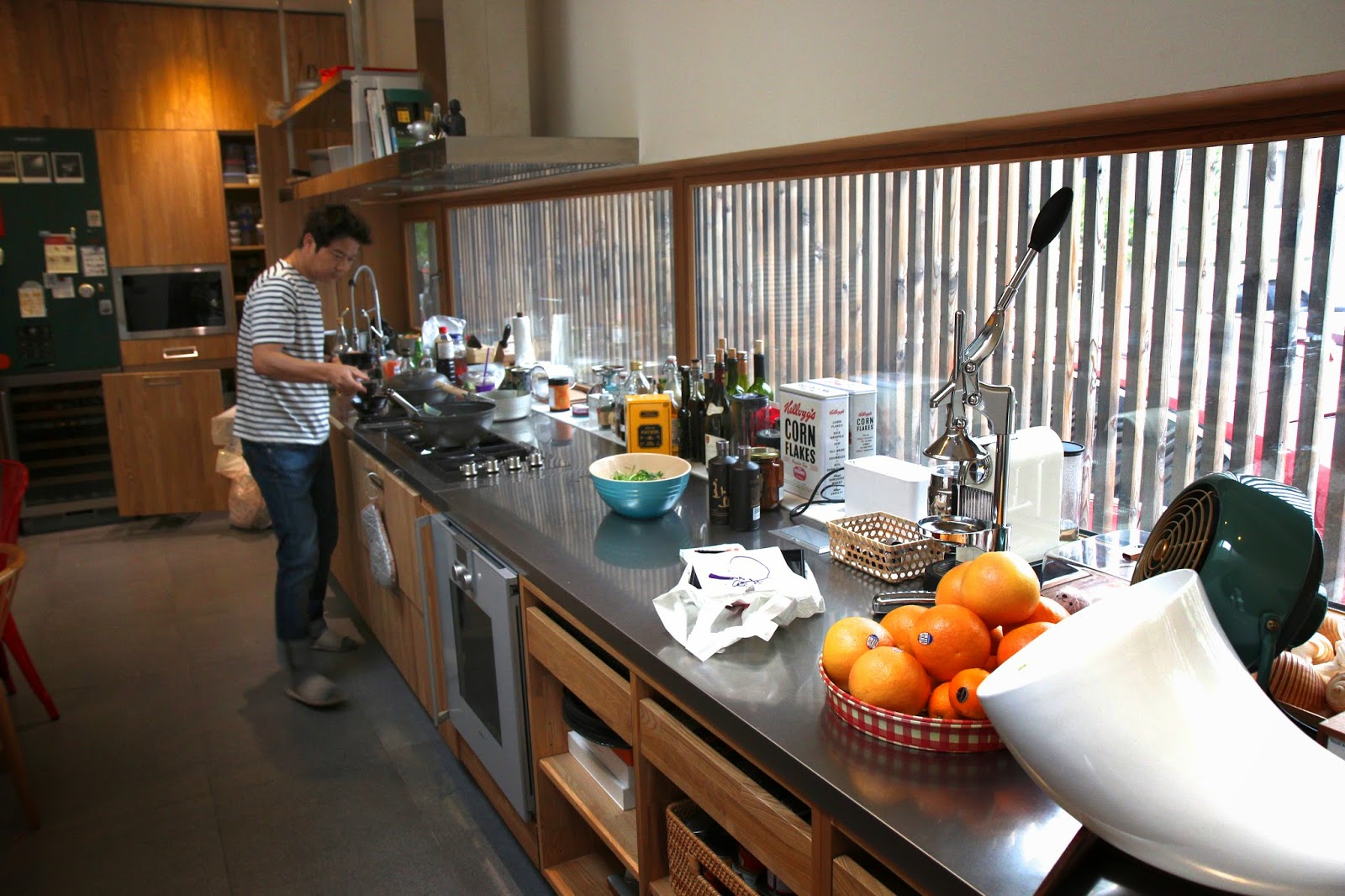 The stainless steel countertops are nice. 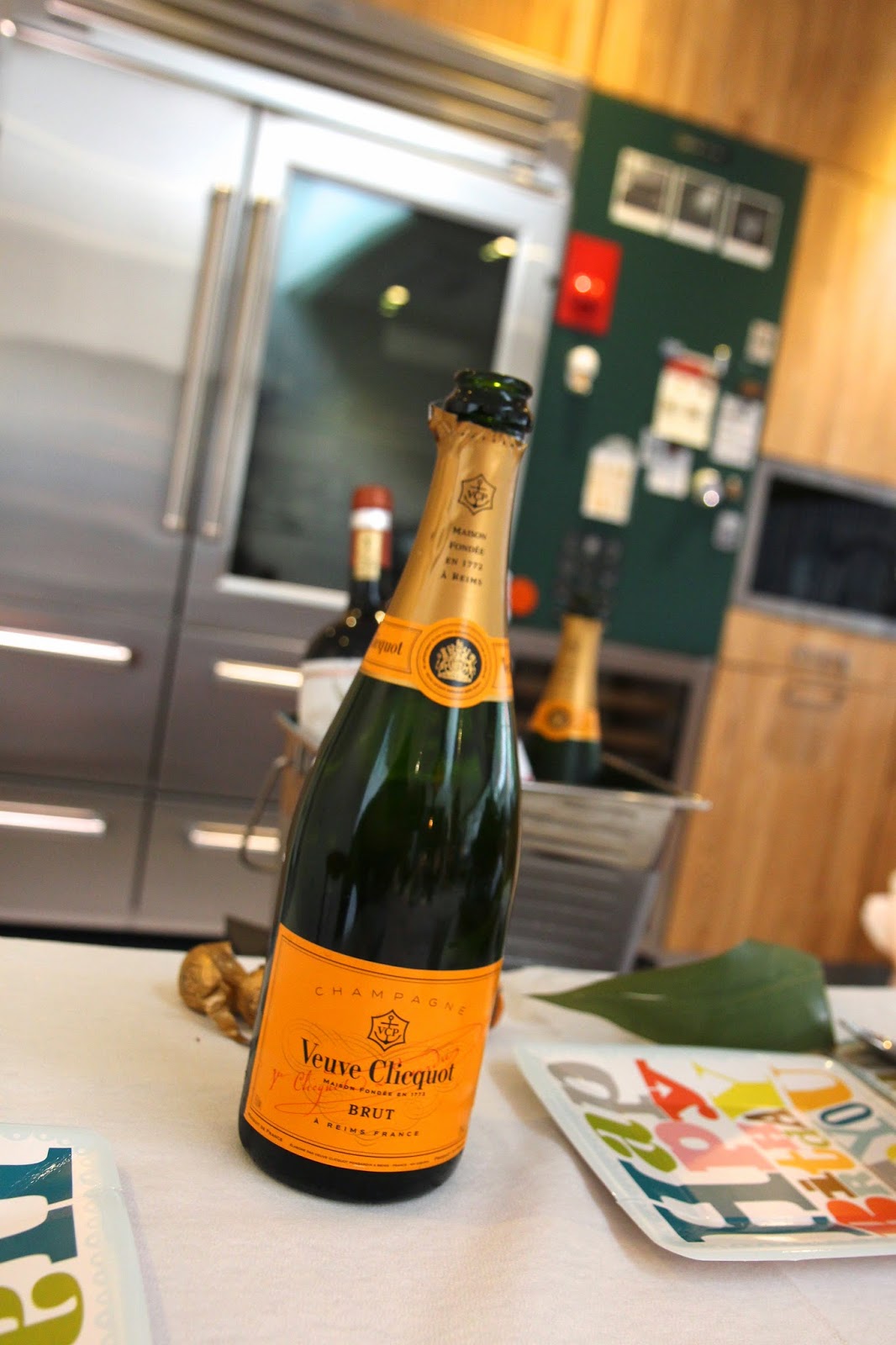 Notice the Sub-Zero refrigerator in the background, you know, behind the bucket filled with bottles of Veuve Clicquot. 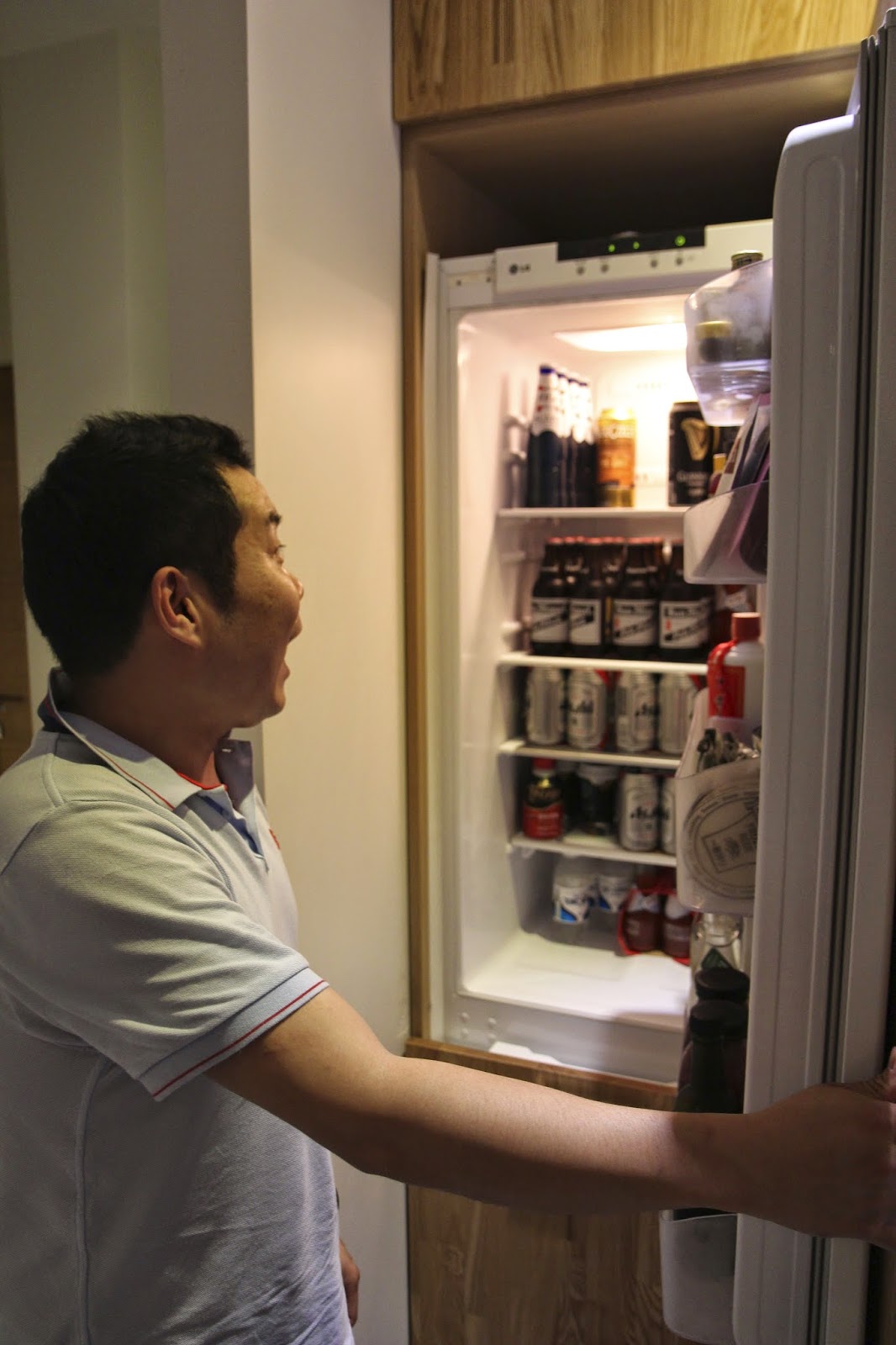 Okay, maybe the booze fridge, I'm a little envious of.

*I don't recall if I ever tried consciously to impress anyone with cooking [Lisa, you'd remember best from those early days when I really started getting gastro-geeky--did I seem like I was trying to impress anyone?]; certainly nowadays, my objective is primarily to feed, ideally with nutritious food, hopefully tasty. 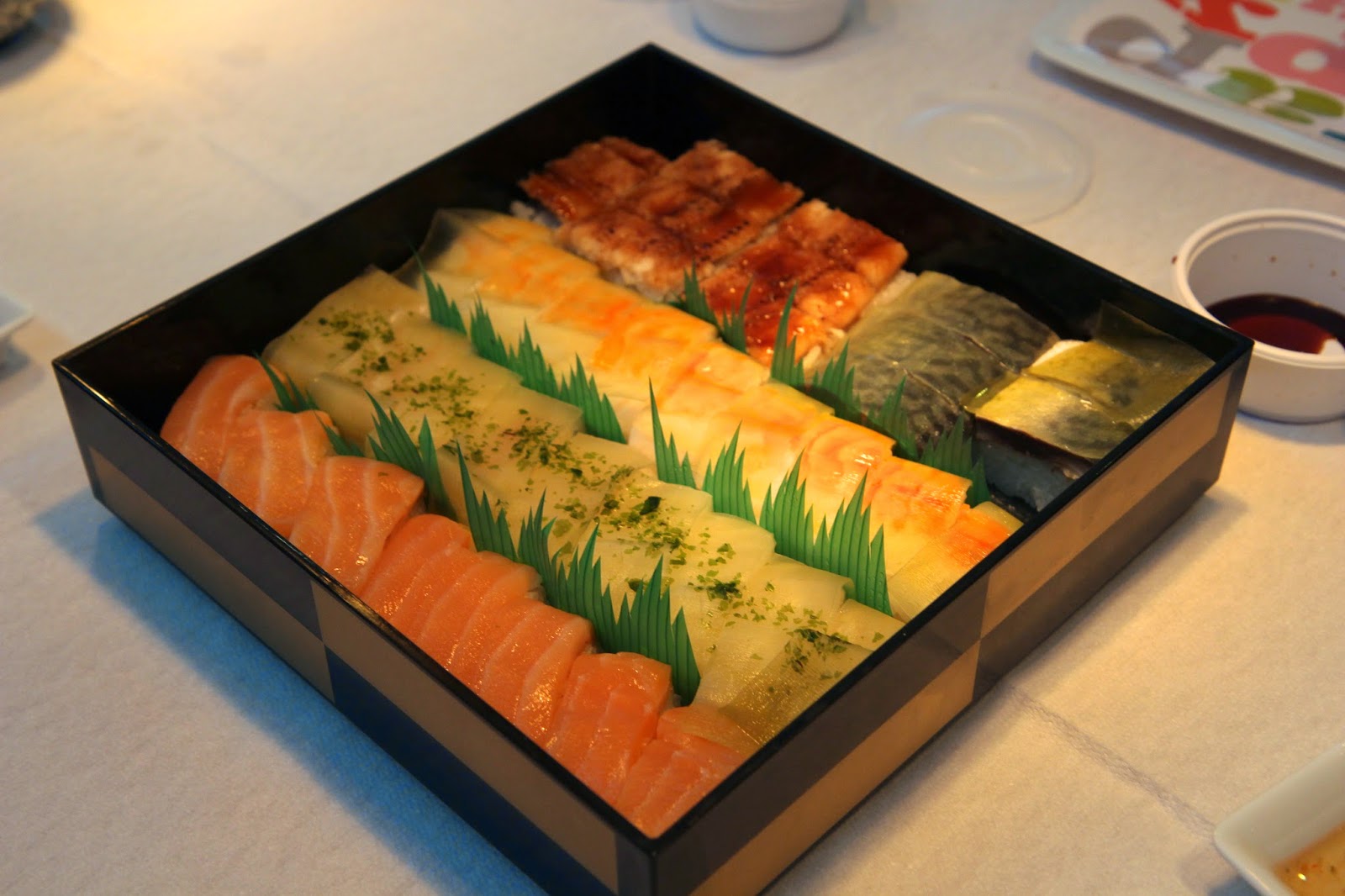 Assorted Oshizushi (2.5)--all the sushi dishes were purchased for takeout from his favorite restaurant Osaka Sushi. 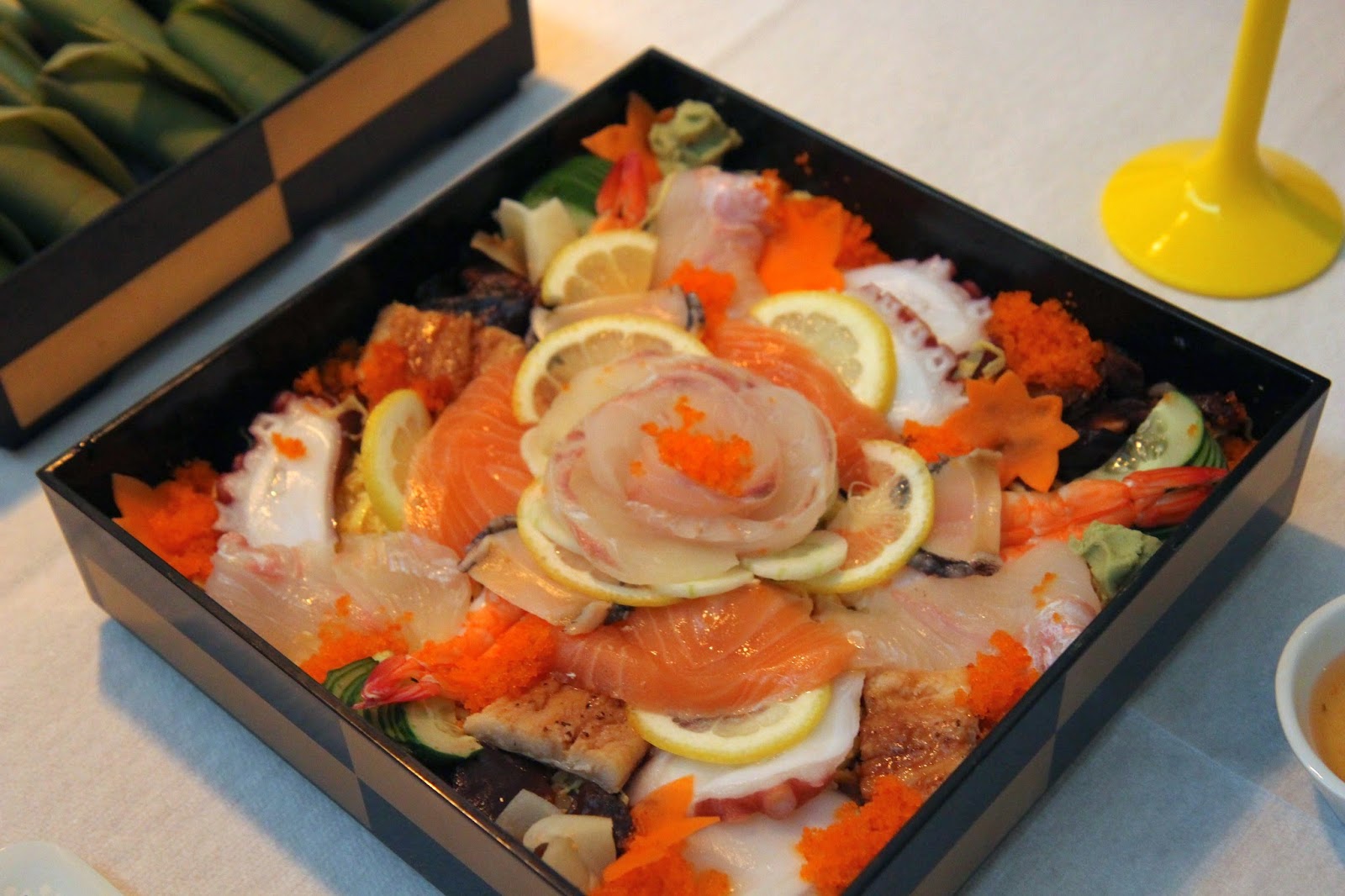 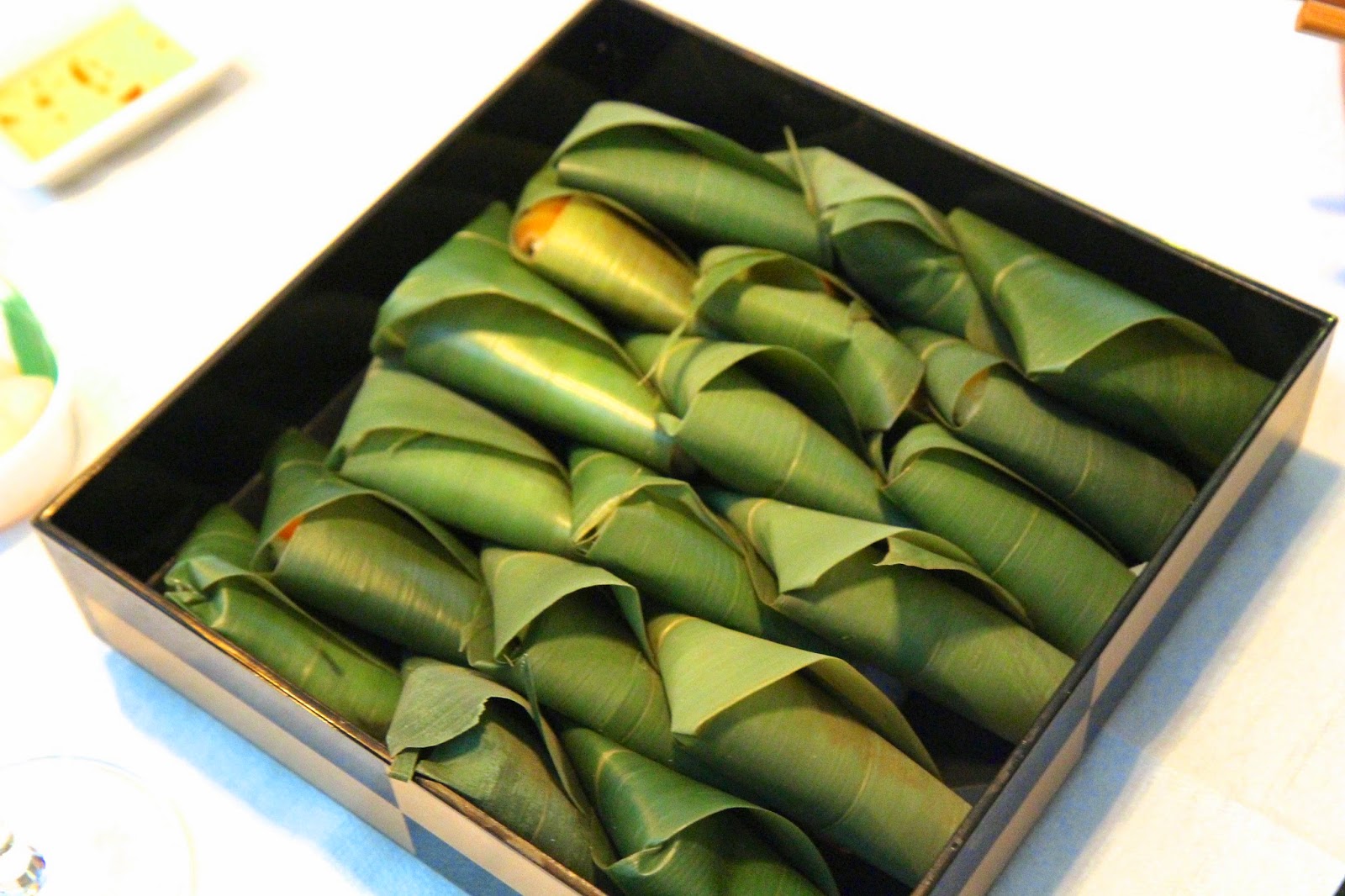 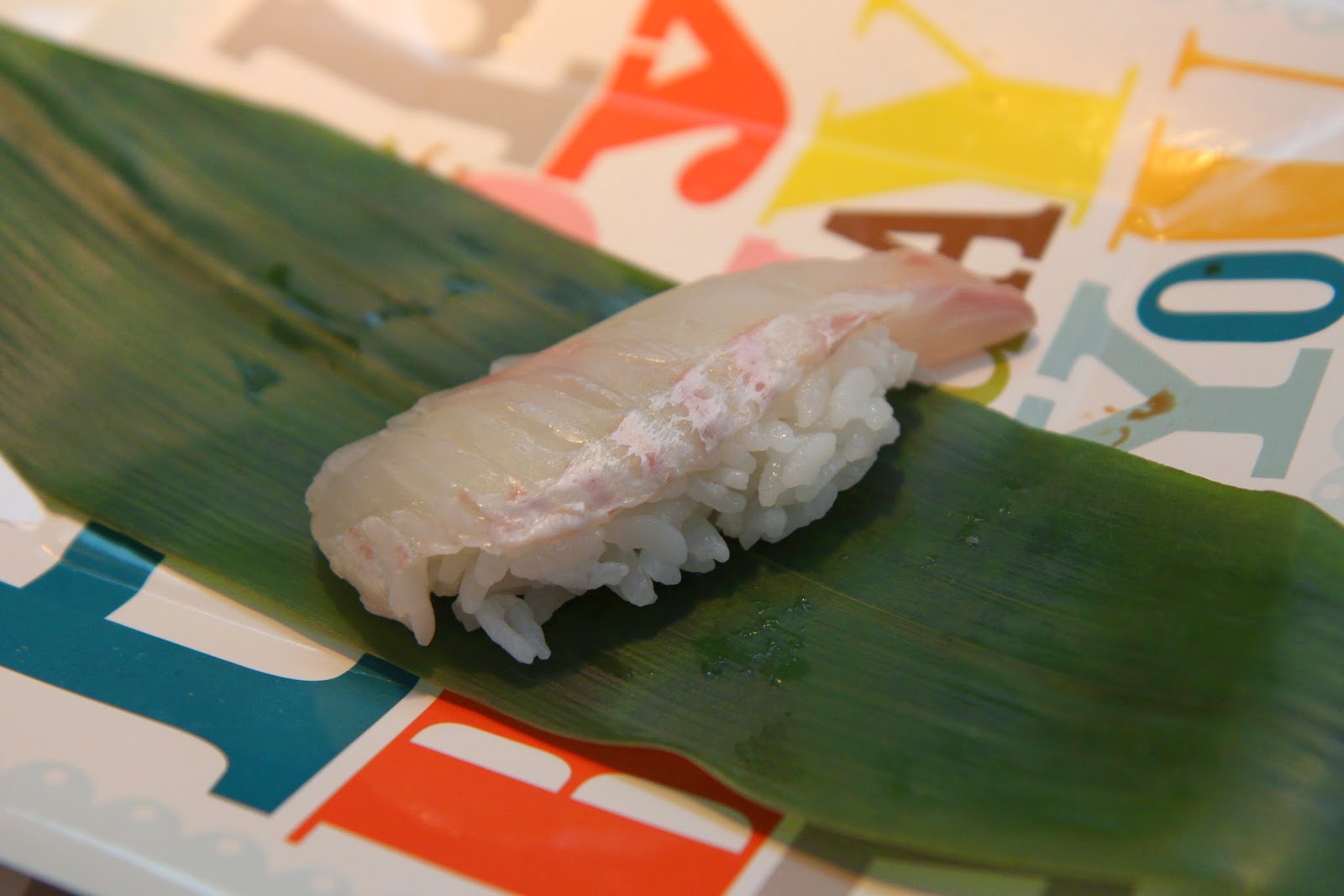 Assorted Nigirizushi (3.5)--the fish was delicately seasoned/marinated in something that I couldn't place, wrapped in bamboo leaves to impart a trace of woodsiness, amazing. 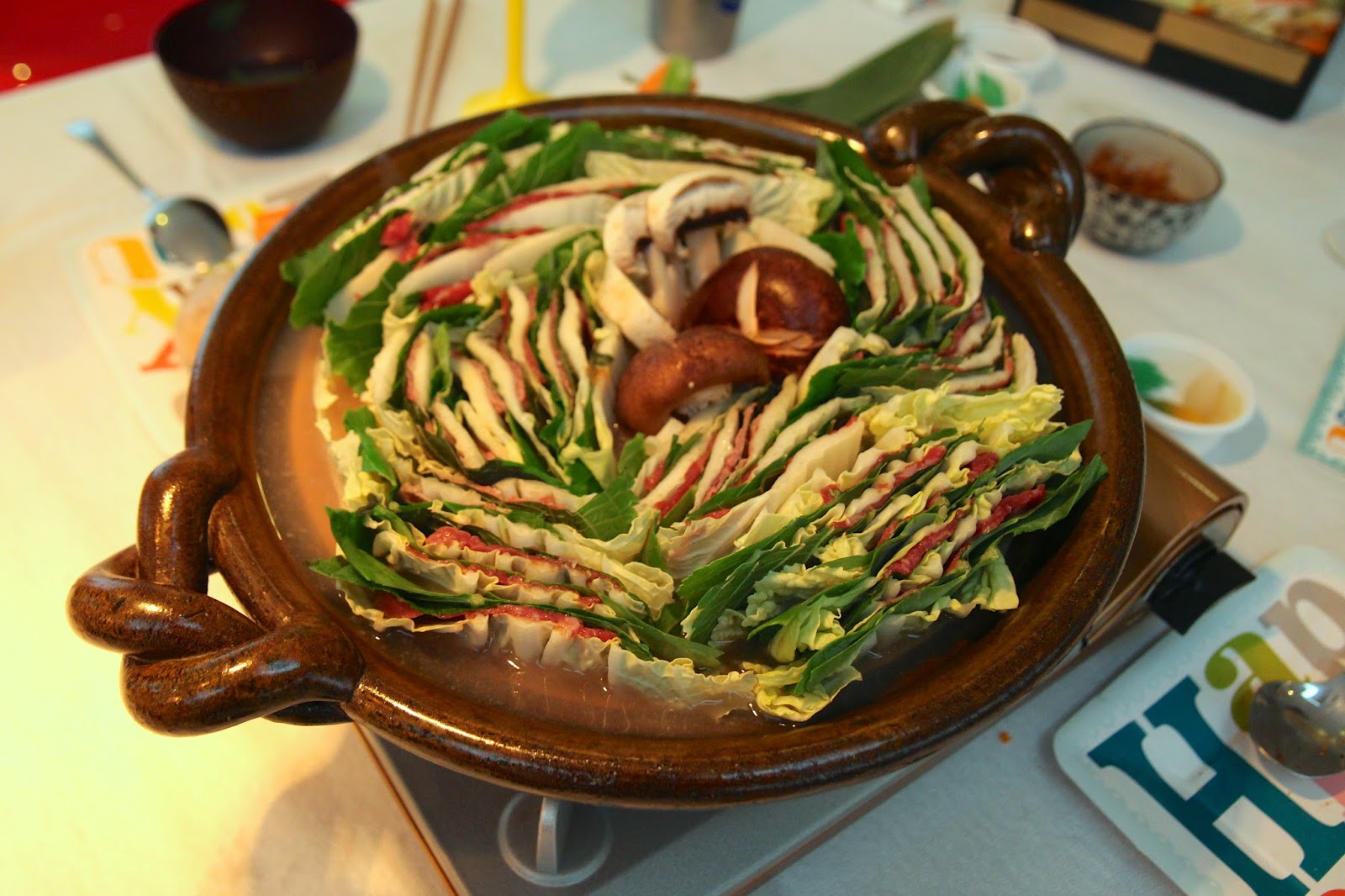 For the sukiyaki--I'm calling it "Dragon Sukiyaki" for future reference--he layered the cabbage and beef and perilla leaves, then cut them into cross-sections, making for a nice visual and also allowed for each bite to contain an equal bit of everything, brilliant. 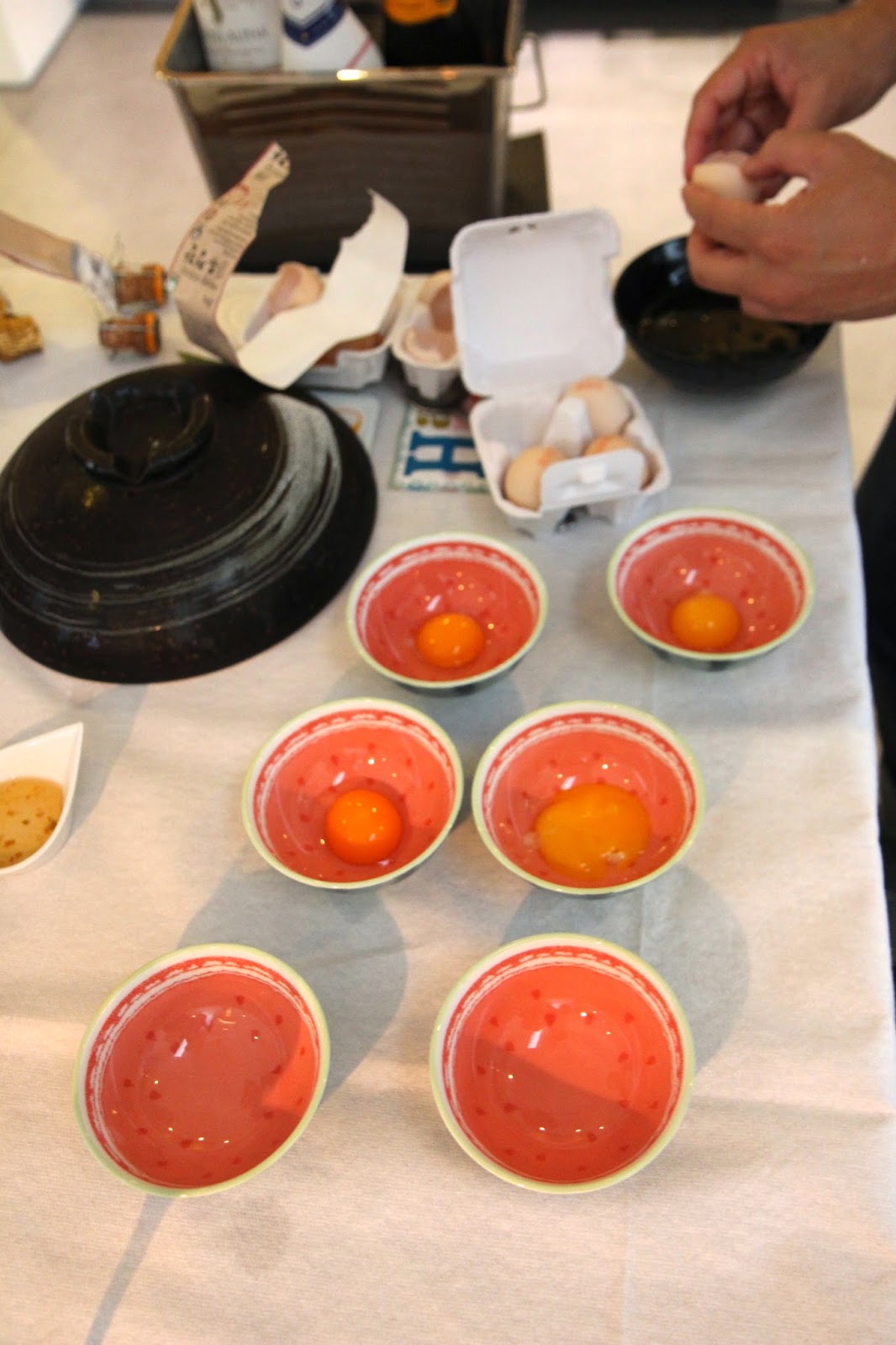 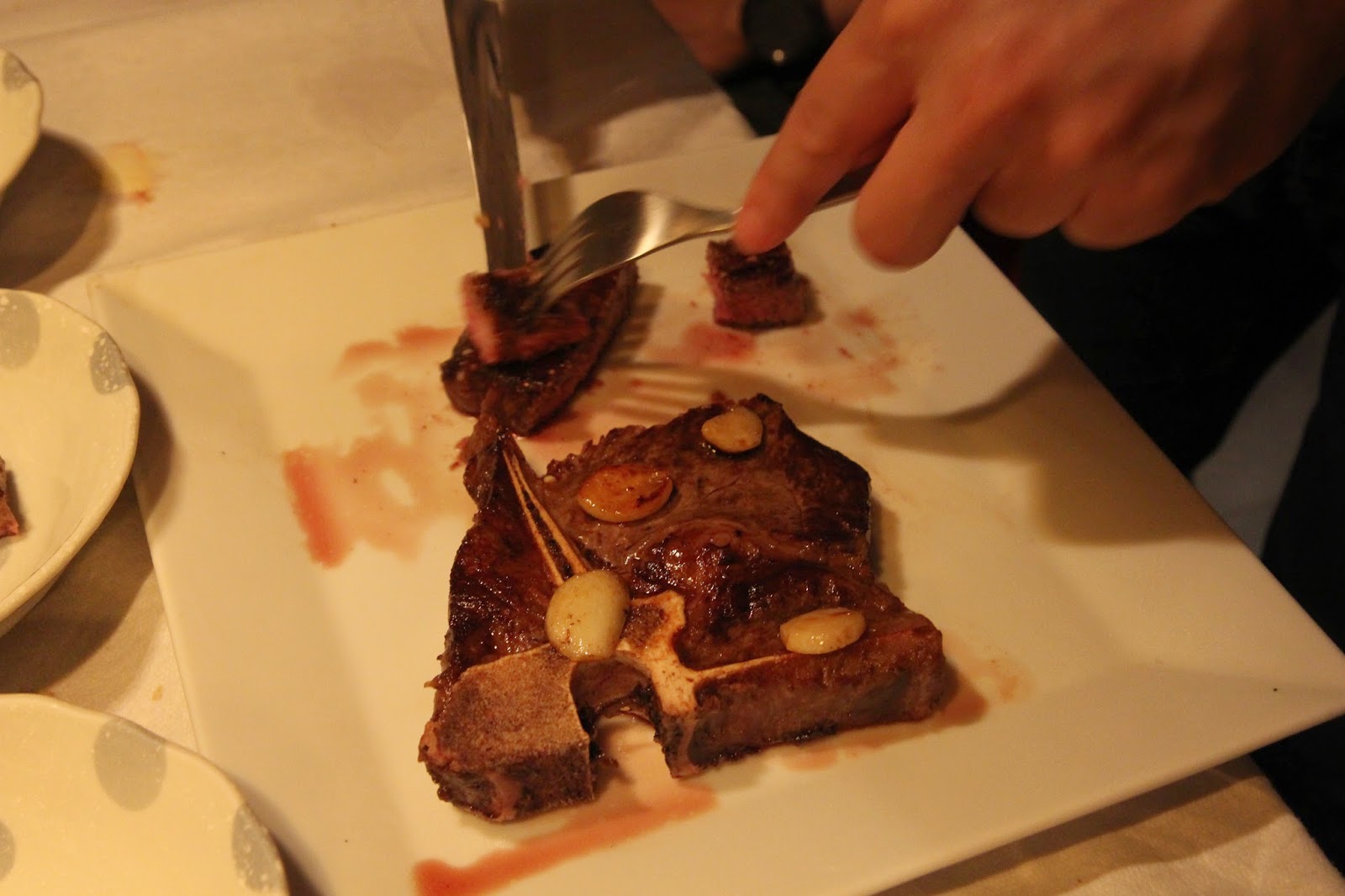 He also doesn't bother resting the meat, a typical novice error, another opportunity for loose juice.

**From cooking classes and probably many personal lessons with buddy celebrity chefs, he does possess the know-how to construct a few fine dishes, like that perfect steak a couple years ago (see generally 3.086 Pan-Seared Ribeye Steak...); but he does exhibit a lack of fundamentals in some areas, like this time cooking a thicker t-bone steak, he started by searing the meat in a non-stick aluminum pan, transferred the steak onto a cookie tray and into the oven to cook through, then put the steak back into the pan to finish it off with that flaming wine trick, all of which could and should be accomplished in a single oven-proof pan, such as cast iron, which will produce better crust, minimize the loss of juices, retain fond for pan sauce, and expedite the process.

***While I'm all for indulging in my own passions, of course on a much much laughably smaller scale, I've found that learning to cook within budgetary restraints presents challenges that can be overwhelmingly satisfying when successfully solved, like producing a great roast with a cheap piece of meat. 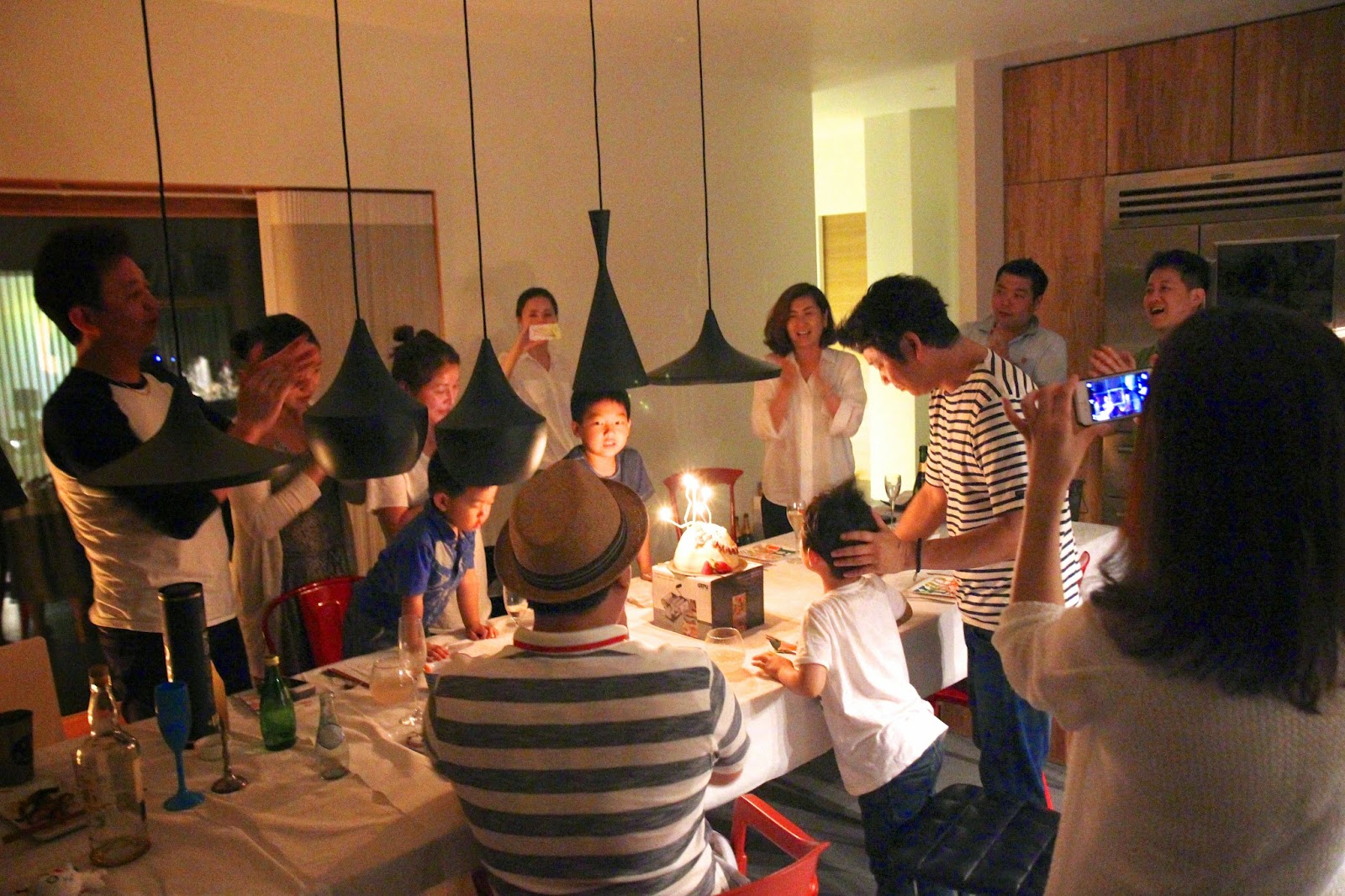 In any case, what a fine meal.