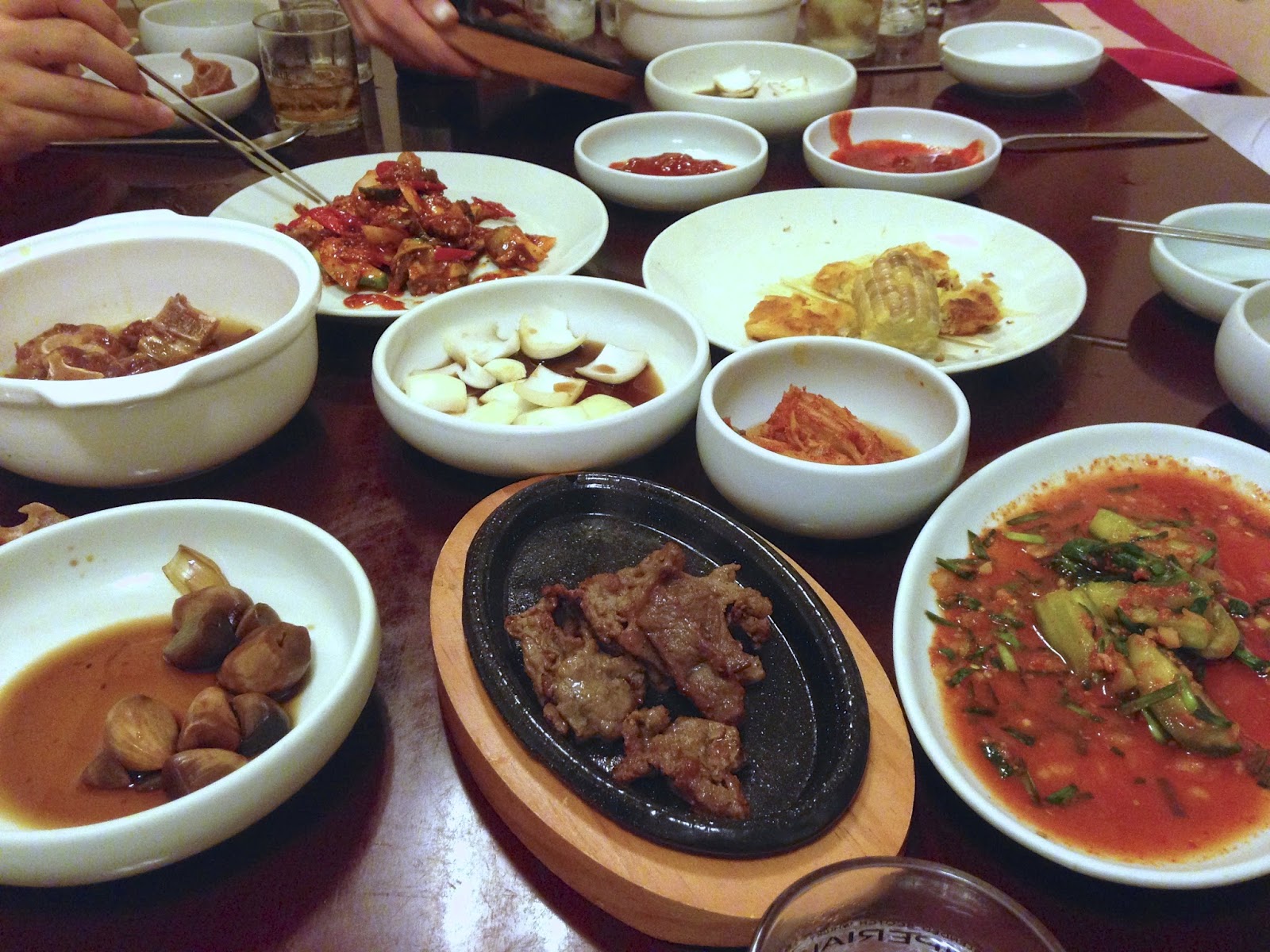 with various WHO/WPRO staff and guests

For my first duty travel to Korea, I've been dispatched to attend a pair of back-to-back tobacco control meetings.  The first yesterday, the second today, both are in support of the lawsuit by the country's health insurance agency against the three major tobacco companies operating in Korea (see generally 5.059 Sweet & Sour Lapu-Lapu).

International Symposium on Tobacco Control & Law.  Held this afternoon at the Press Center Building in downtown Seoul.  The meeting objectives were to increase public awareness on the harmfulness and addictiveness of tobacco use, on the wrongdoings of tobacco companies worldwide and in Korea, and on the role of litigation as a tobacco control tool.  In addition to invited guests, the event was open to the general public and mass media. 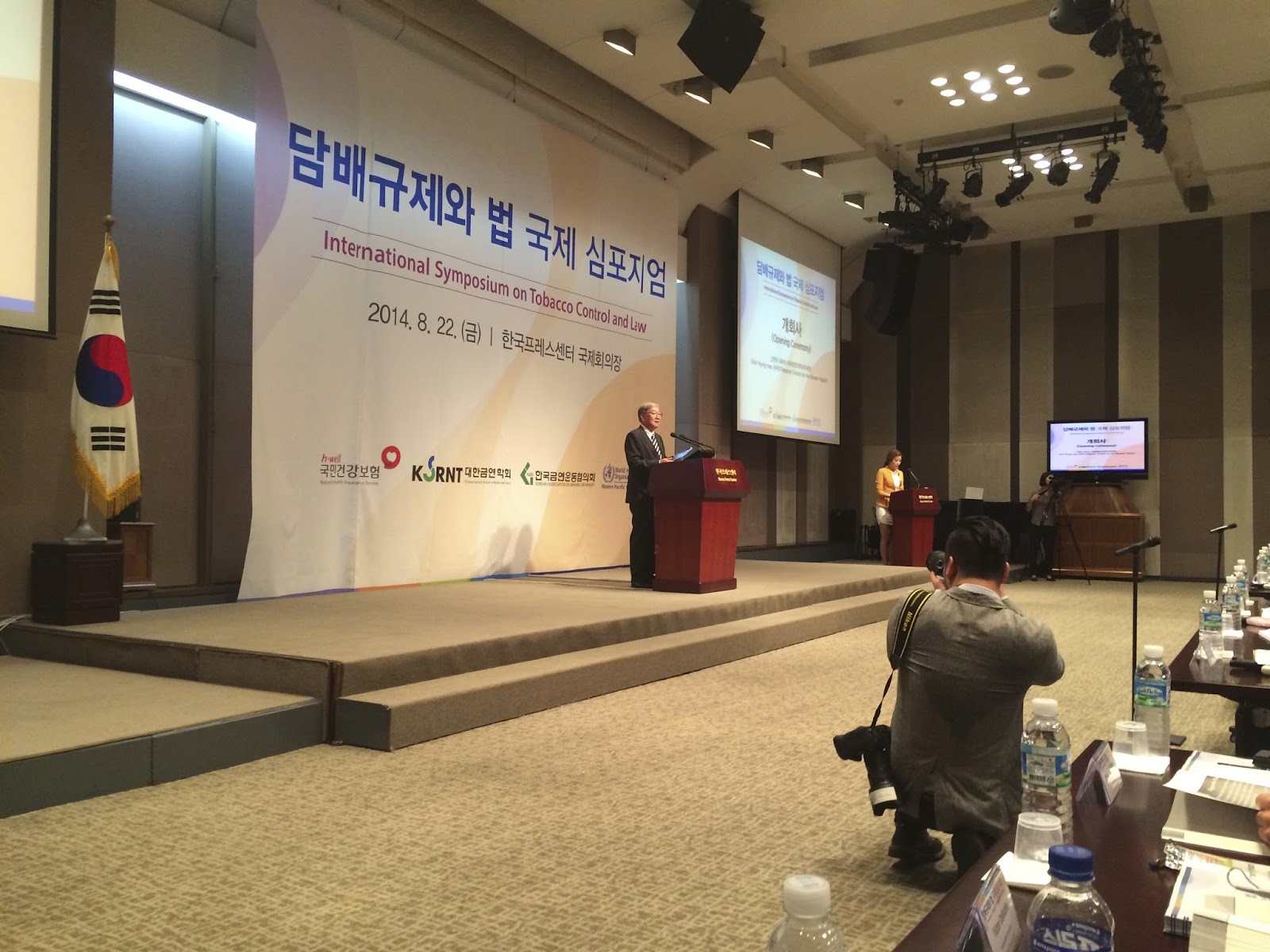 The Boss, delivering the opening remarks and congratulating the agency for launching this "preemptive strike" (my words) against the tobacco industry. 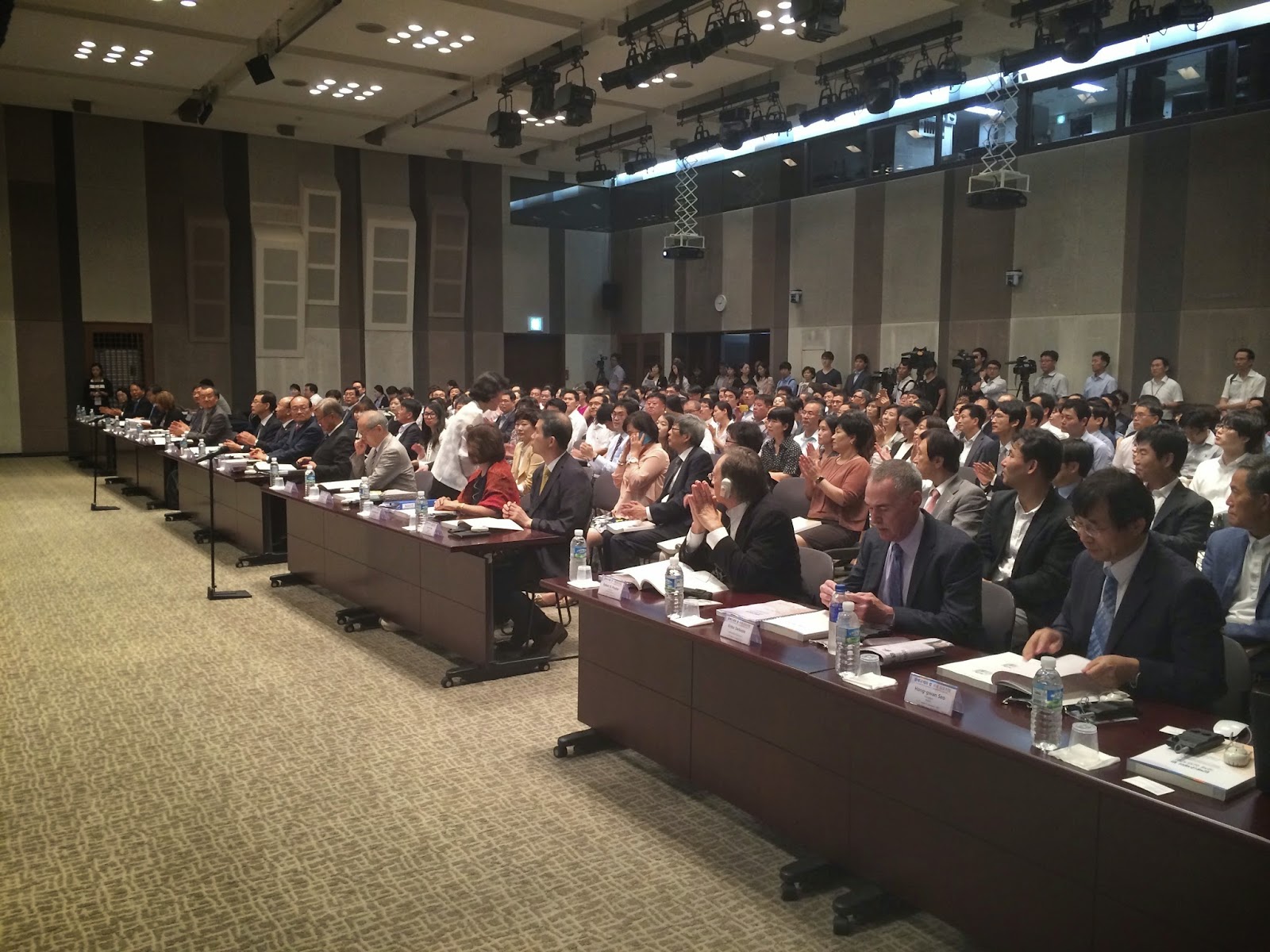 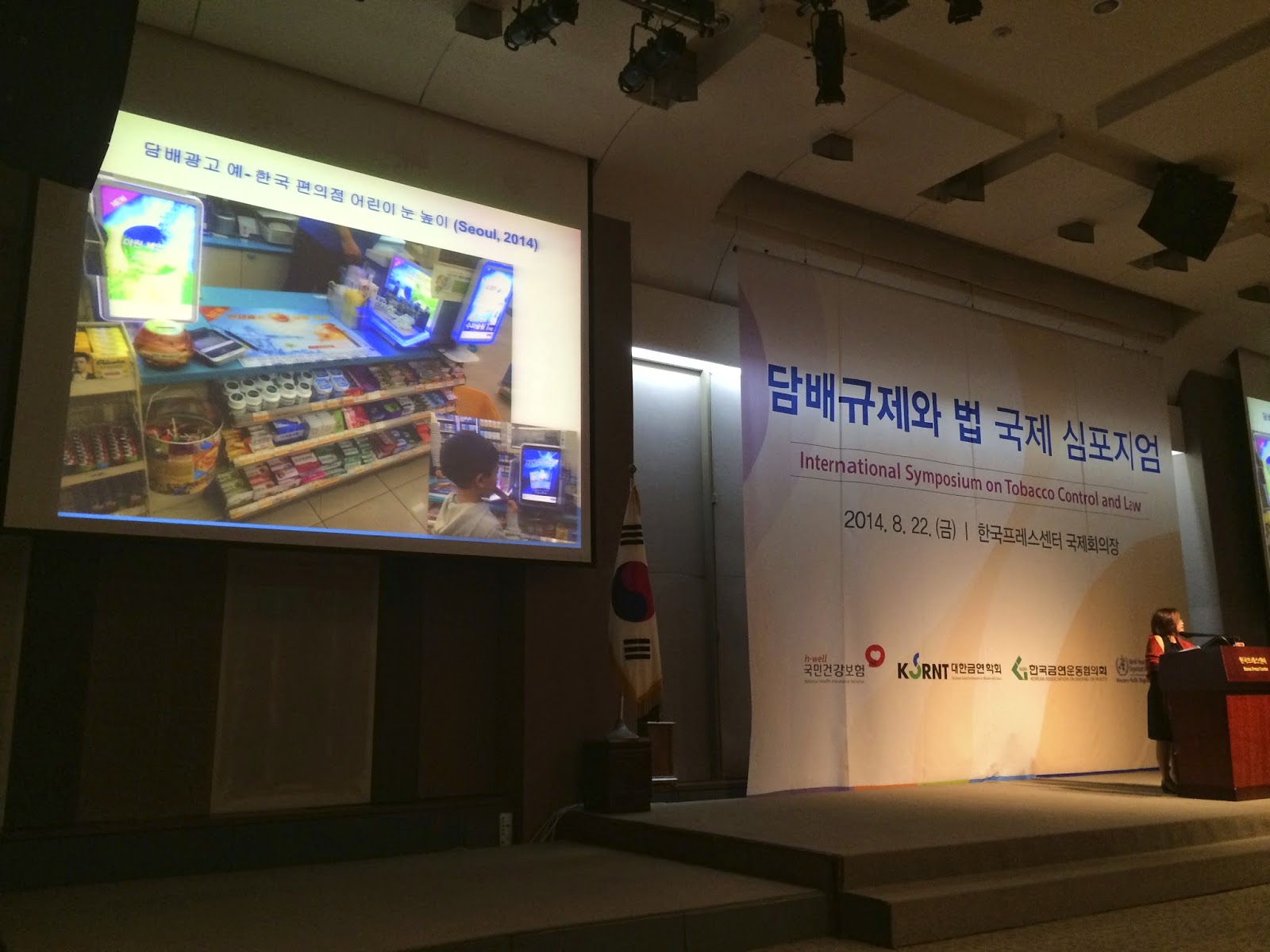 Doc SM, presenting a slide with my photos of tobacco advertising at convenience stores in Korea--in fact, the main photo was taken yesterday at the 7-11 in our hotel; the smaller insert, showing DJ, different store, different date, has previously been featured on the cover of the meeting report for the Informal Consultation on Reducing the Harmss of Marketing to Children, which is where I was offered the consultancy contract that ultimately led to my current position--full circle. 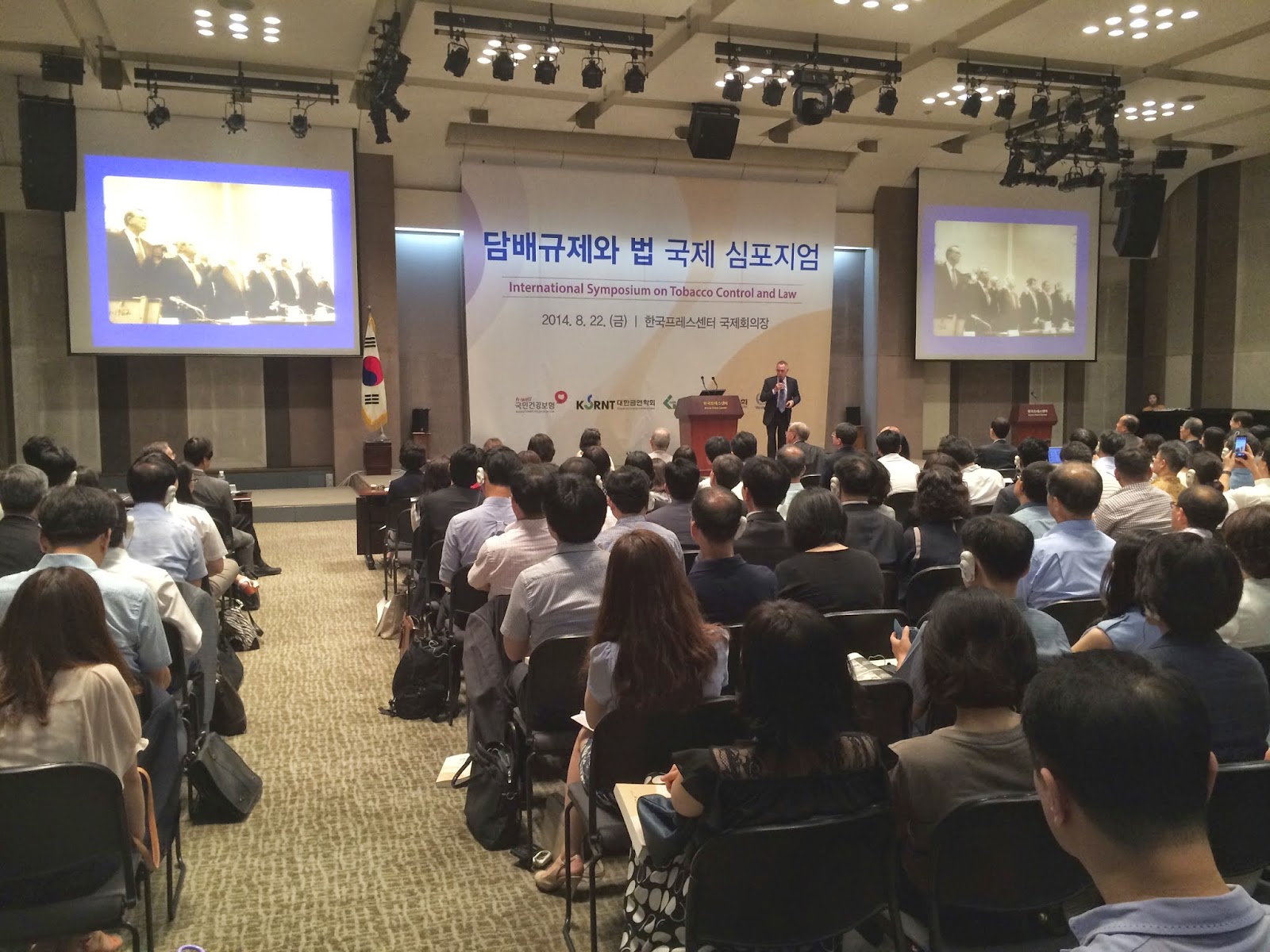 Dr VD, former researcher, at PMI one of the original tobacco industry whistleblowers, the guy who proved that nicotine is in fact addictive, subject of the documentary Addiction Incorporated, bringing down the house with his insider story of lies and corruption within the industry.

*KT&G is a Korean tobacco company.  Largest market share in the country at over 60%.  Produces most of the popular local cigarettes, including TIME, which was my brand of choice for 20 years until I quit a couple years ago.  Once state owned, fully privatized in 2002.  Originally called "Korea Tobacco & Ginseng," the company renamed itself "Korea Tomorrow & Global," reflecting their long-term ambitions to move beyond Korea and kill people all over the world. 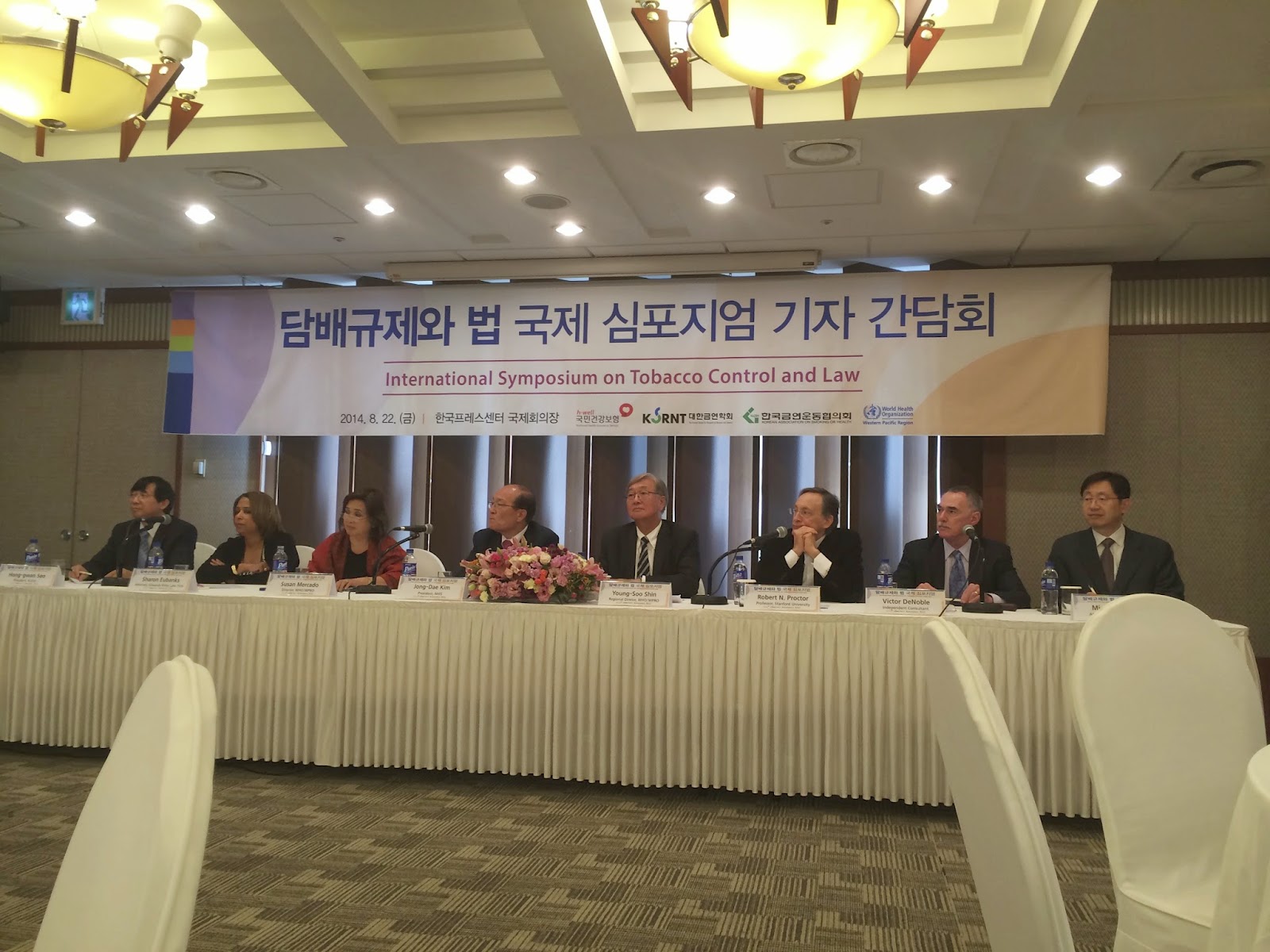 At lunch, a press conference with the key speakers. 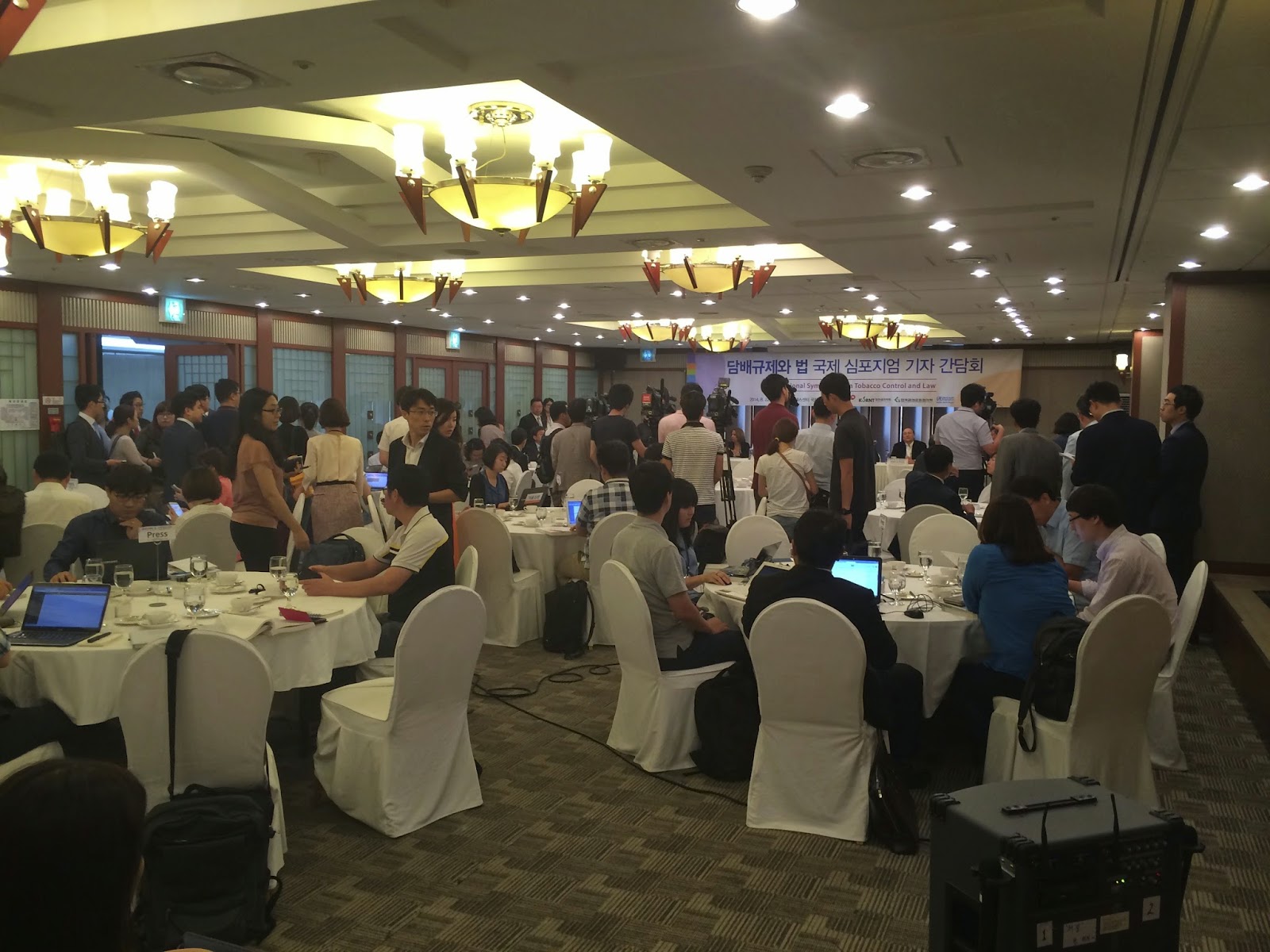 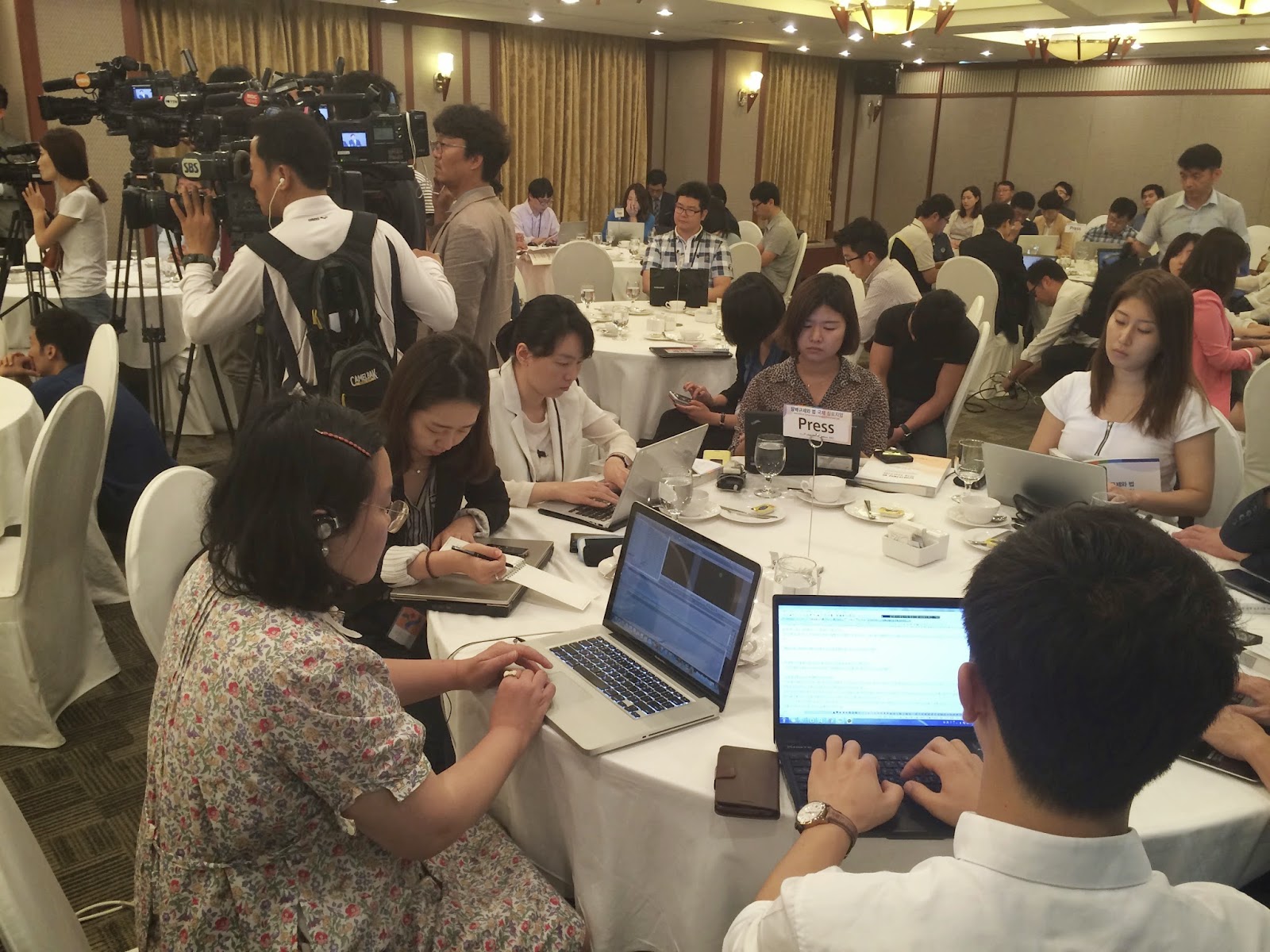 Sensing a great story, the press came out in full force, all the major print/broadcast/internet outlets represented.

The Symposium was a resounding success.  The speakers presented a powerful picture of a manipulative and devious tobacco industry.  Before the end of lunch, stories began to appear on internet sites.  By evening, all the news programs featured extended segments on the Symposium, the agency's lawsuit, and tobacco control in general, with much focus on Korea's absurdly low cigarette prices and marketing practices targeting children.  A good day's work. 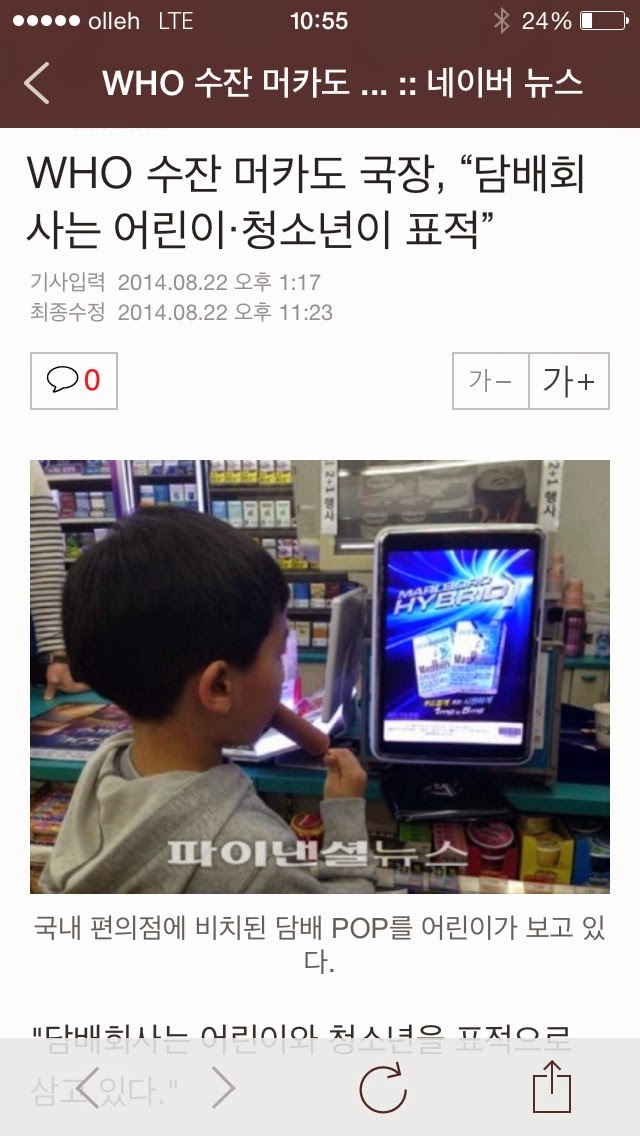 The very first story to appear on the internet, titled "The tobacco industry targets children/teens," used my photo (see originally 5.102 Potato & Corn Croquettes)!  The wife wasn't too thrilled by the notion that our son was becoming the poster child for marketing malfeasance, but I couldn't be prouder.

Following the close of the Symposium, an official dinner was hosted by the organizers at the Press Center Building.  Same room where we'd had lunch, same exact menu.  Woe is me, a guy can eat surf & turf only so many times in a day. 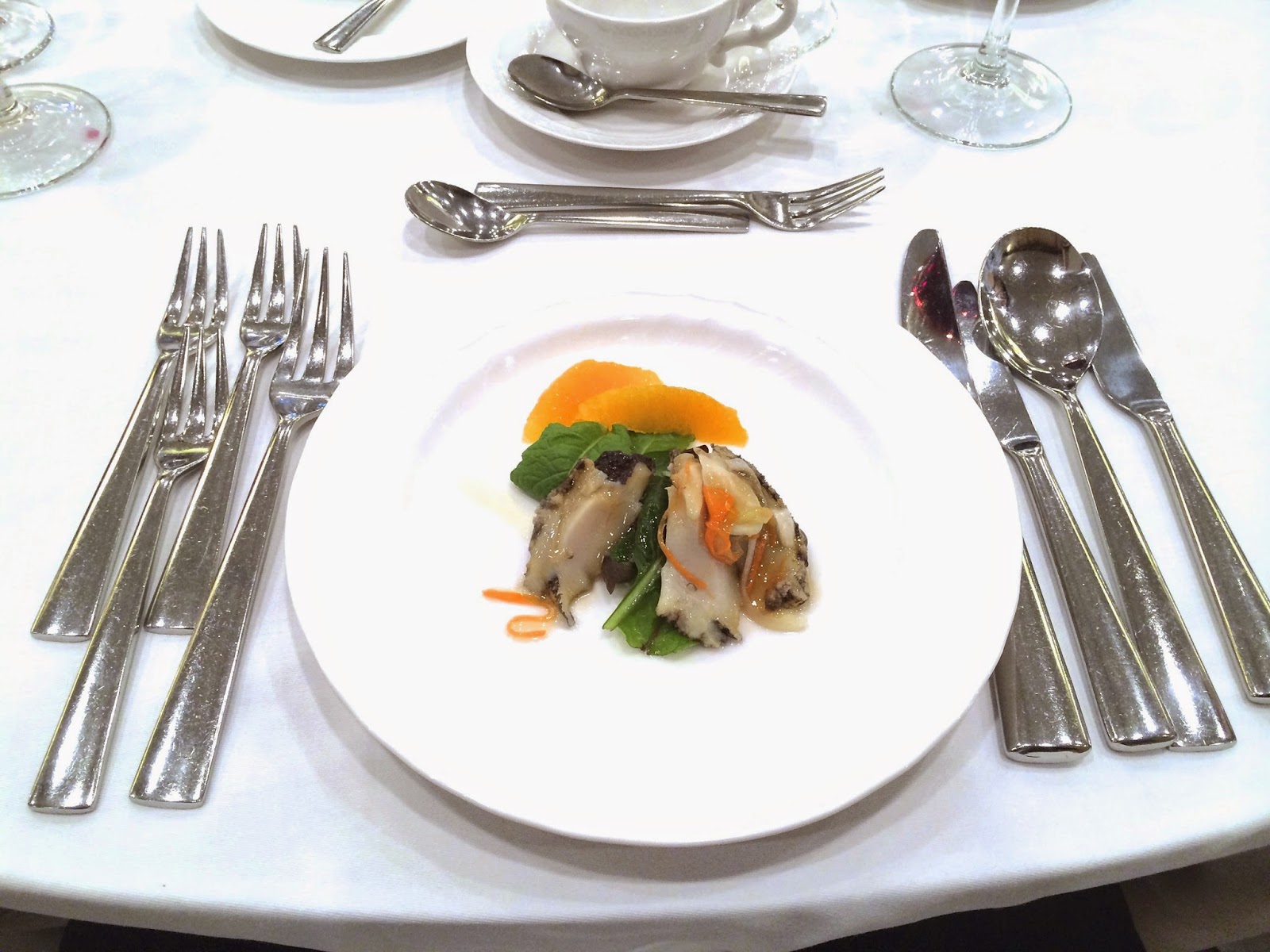 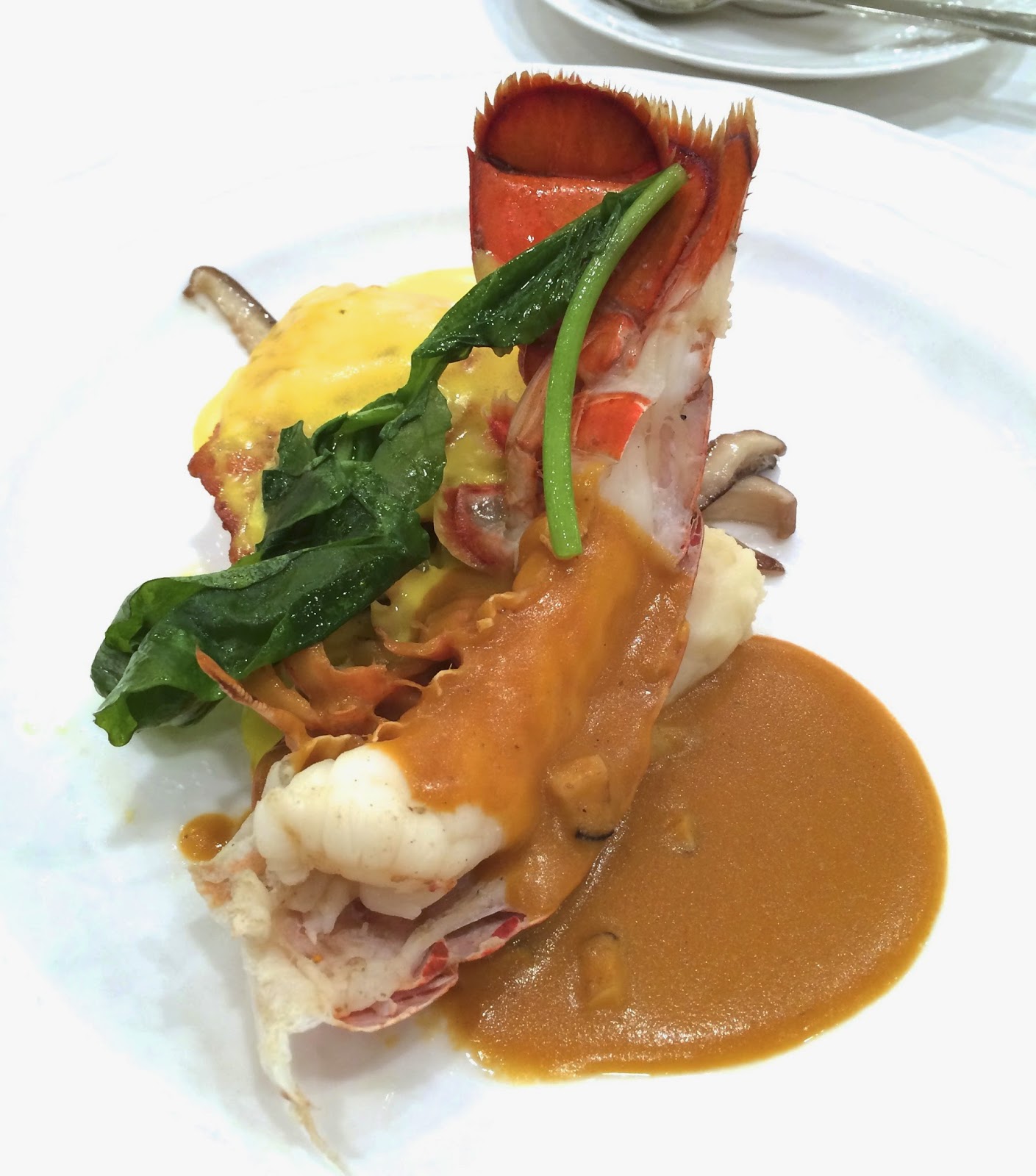 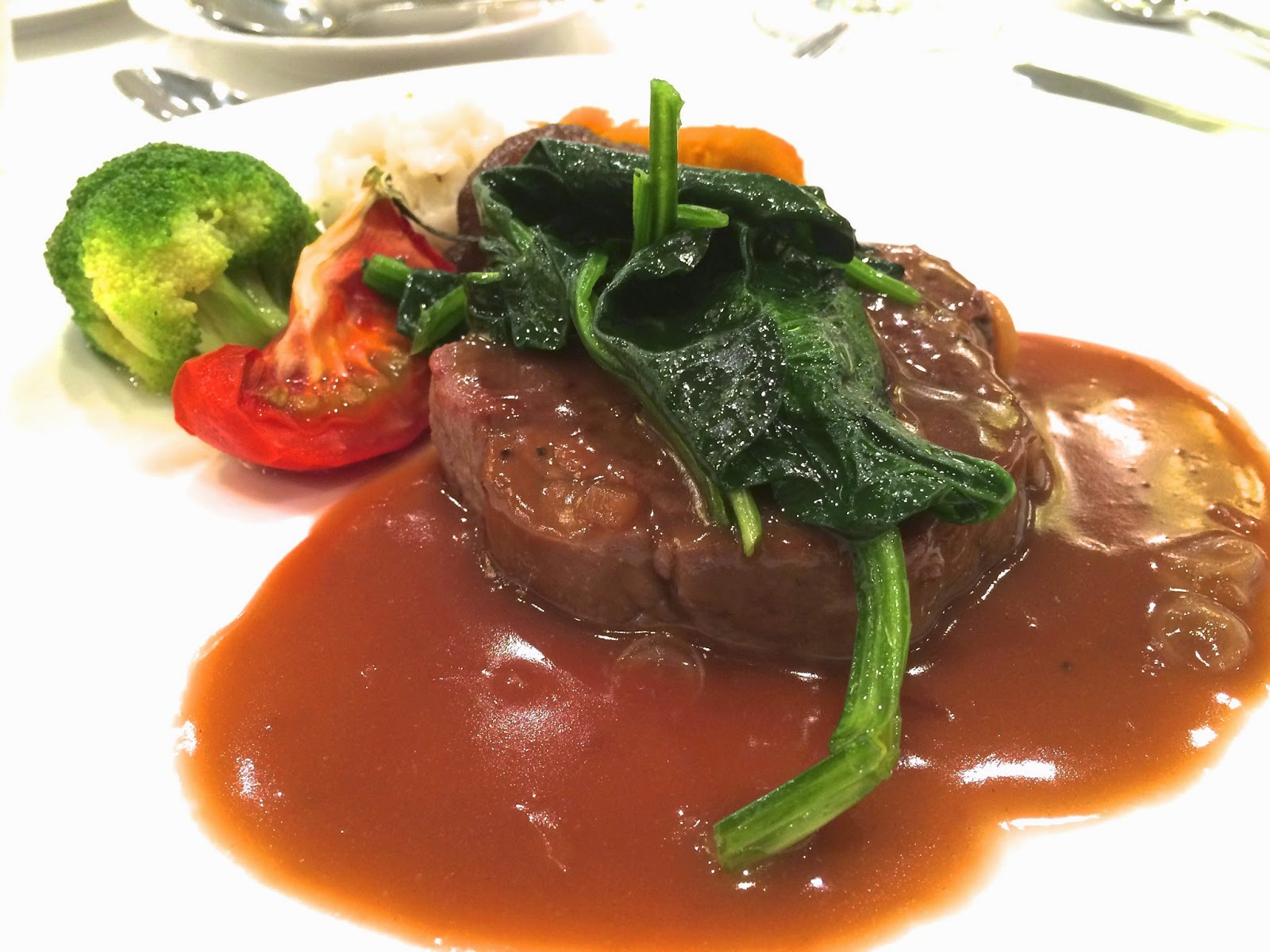 
Tai Hwa is a Korean restaurant.  Located in Insa-Dong, another back alley joint.  But unlike the place where we'd had our first dinner (see generally 5.227 Stars for Stars), this one has managed to retain its old-world charm, no pandering to the tourists.  The boss has frequented the restaurant for decades, which says a lot.** 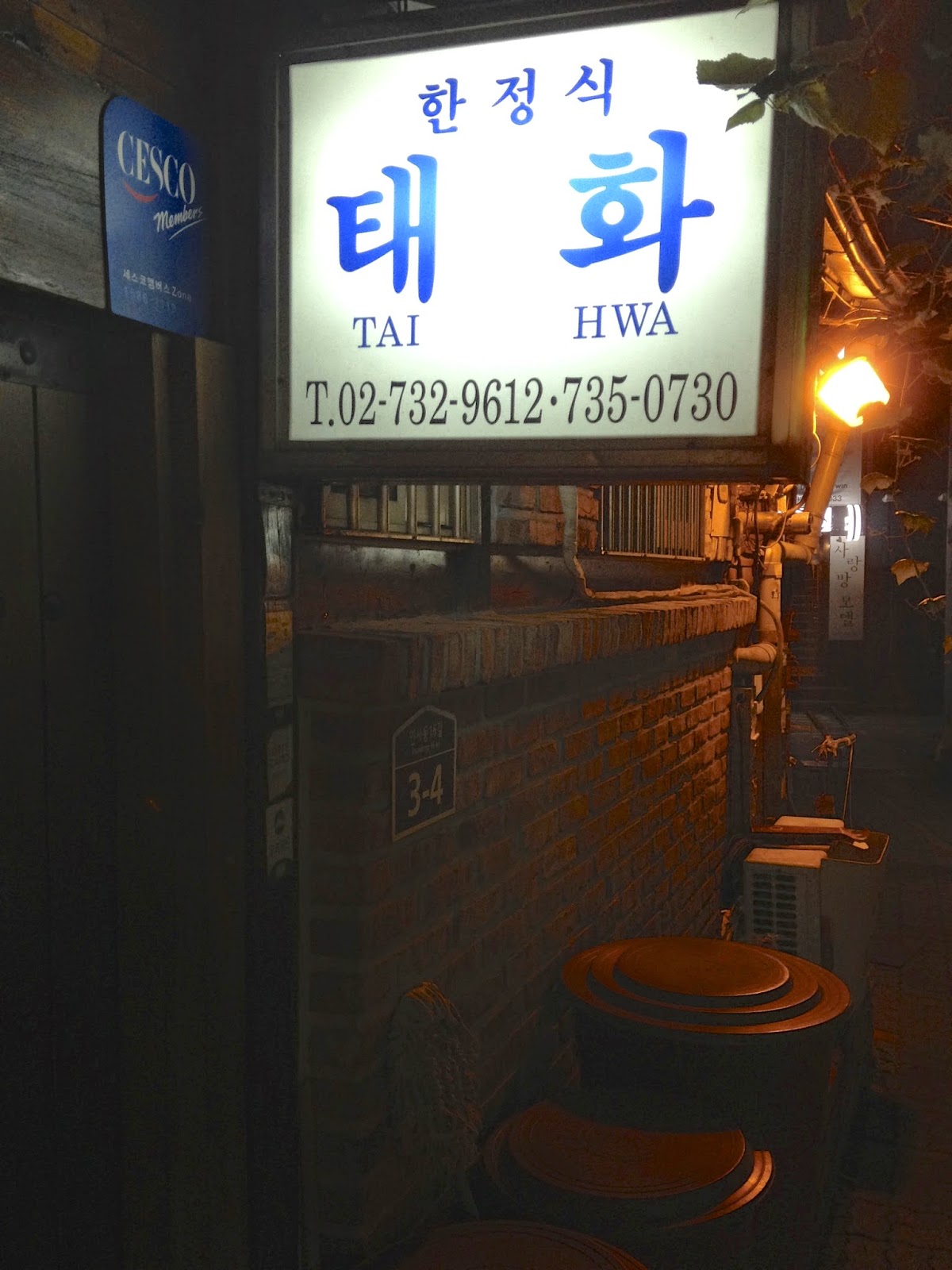 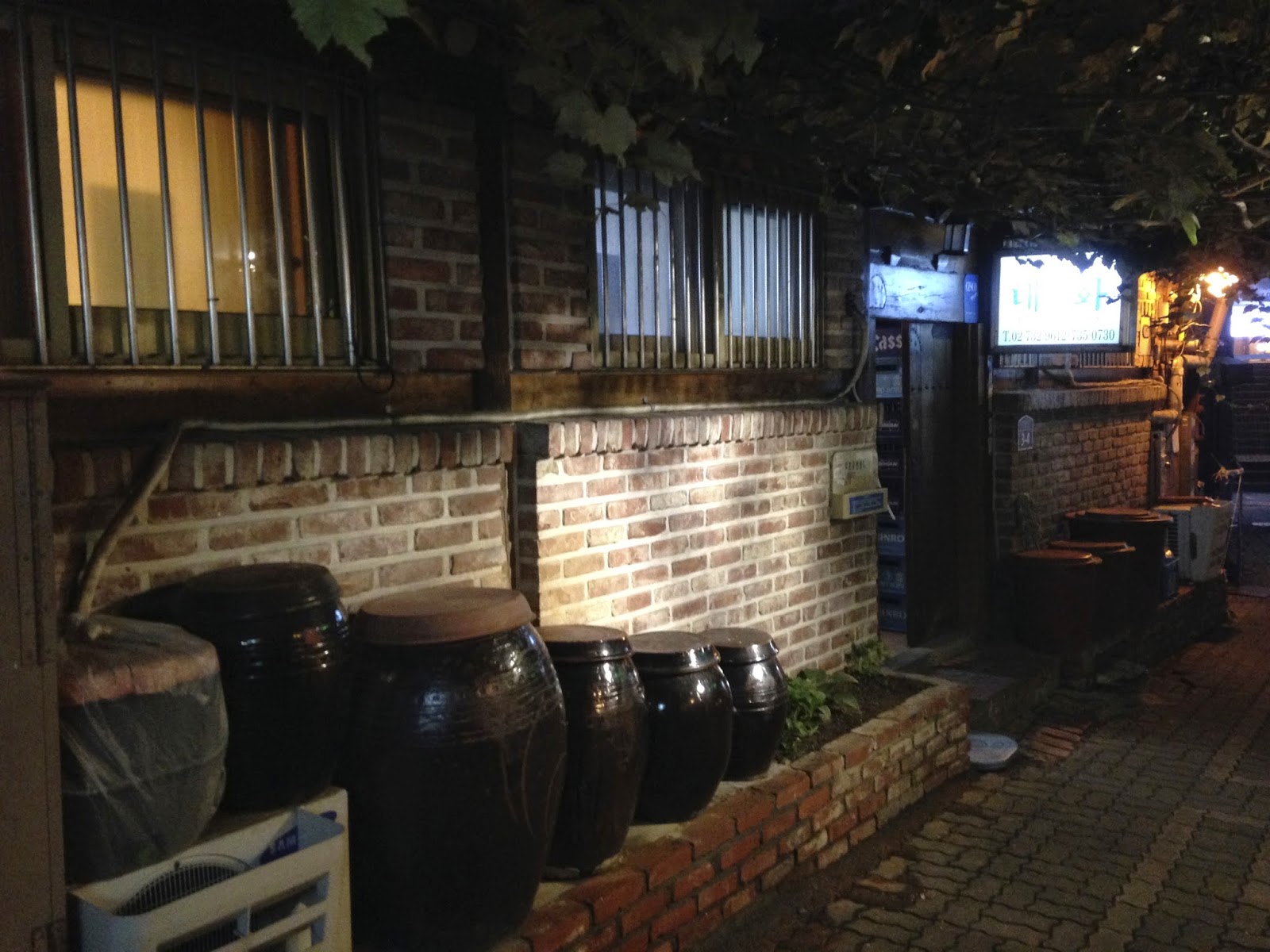 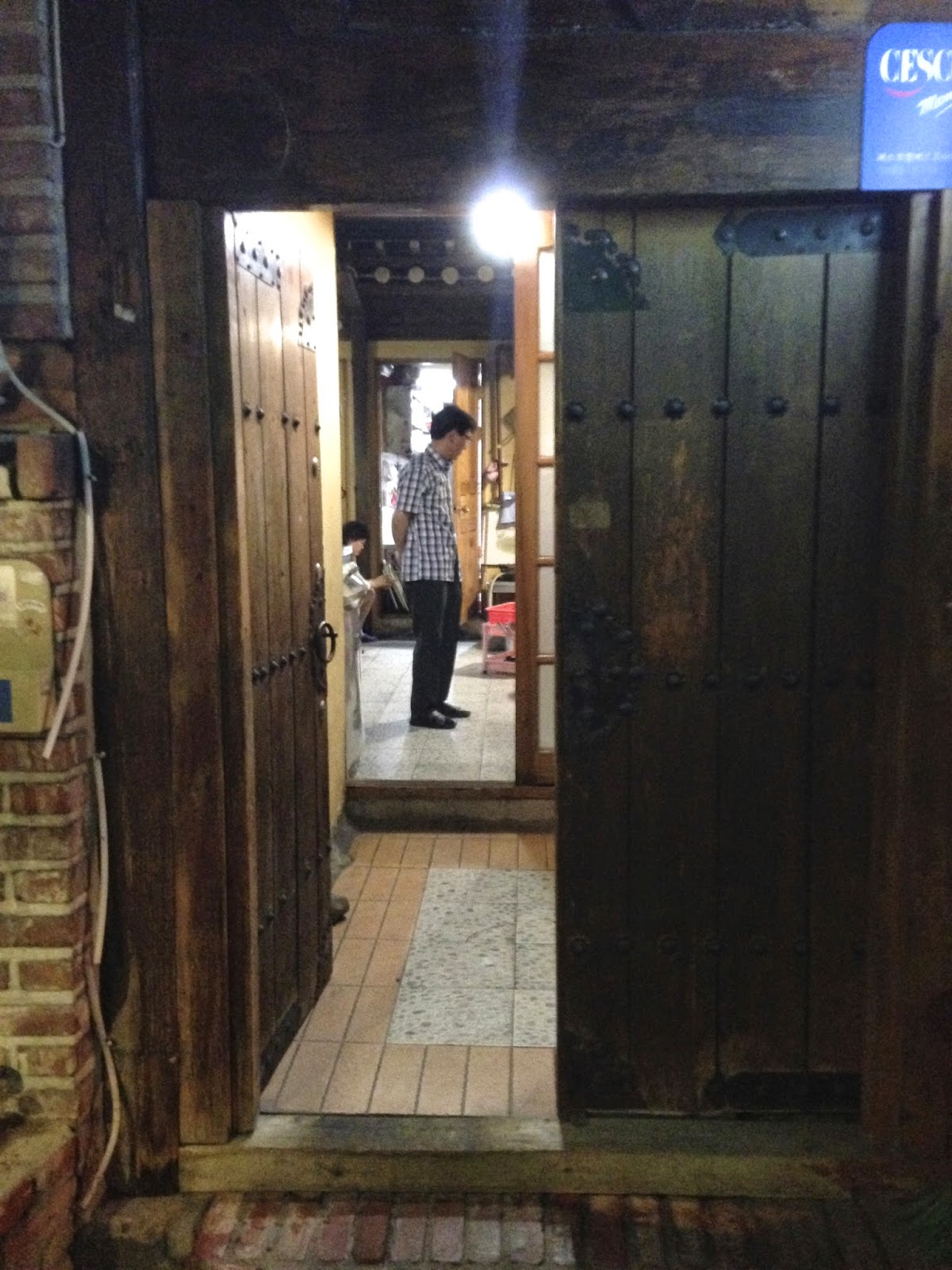 Like many establishments in Insa-Dong, the building comprises what was once a house. 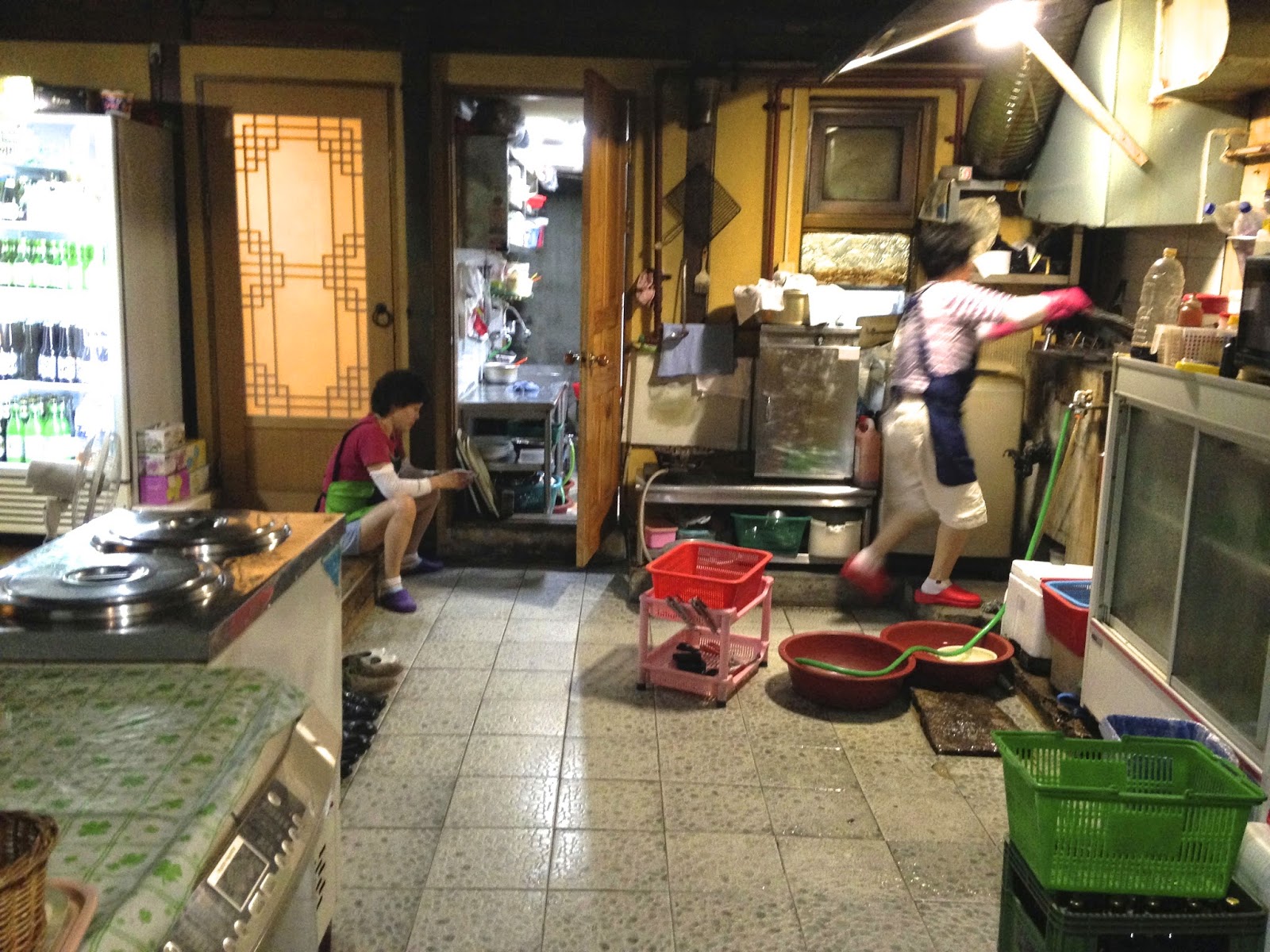 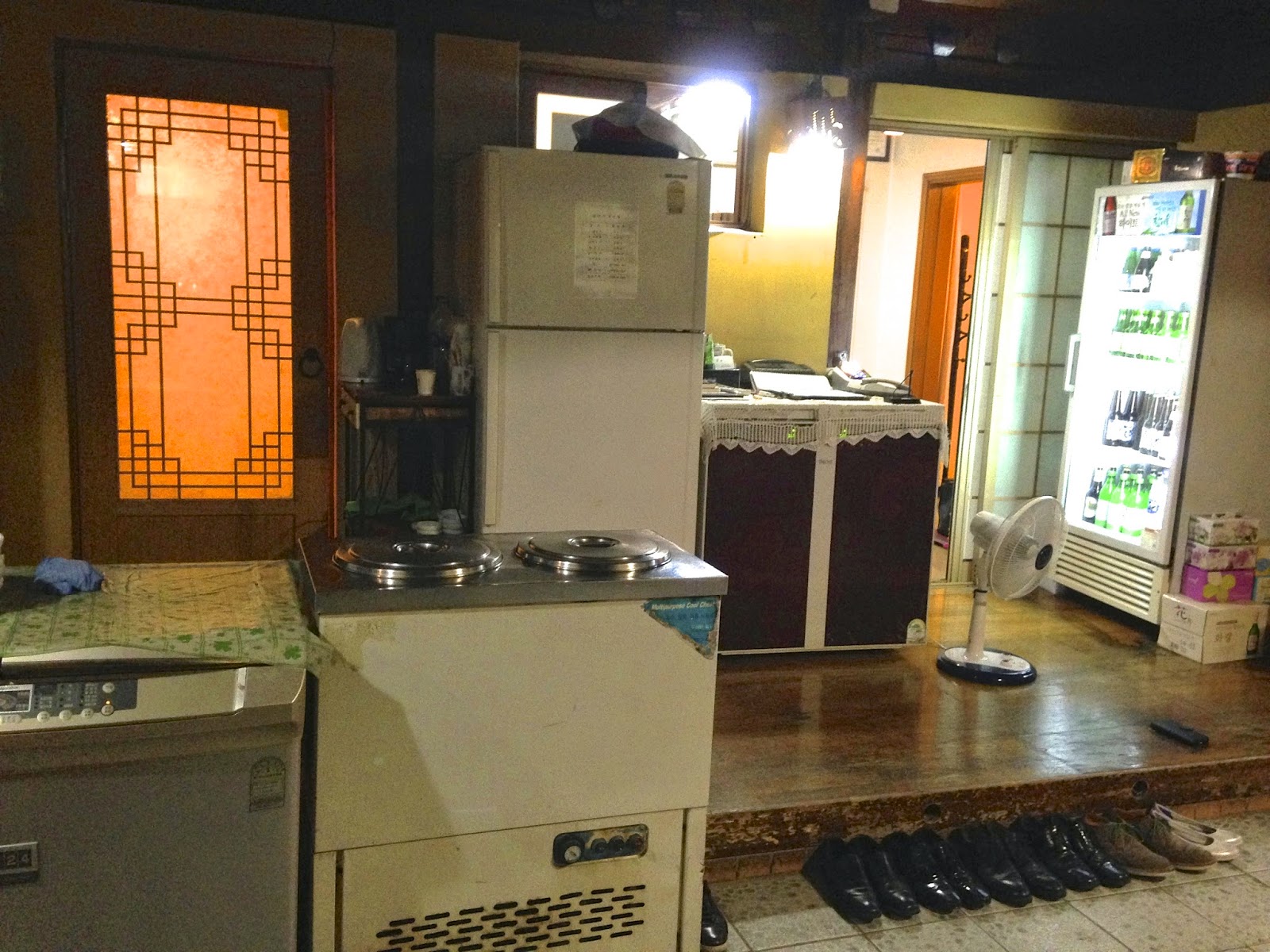 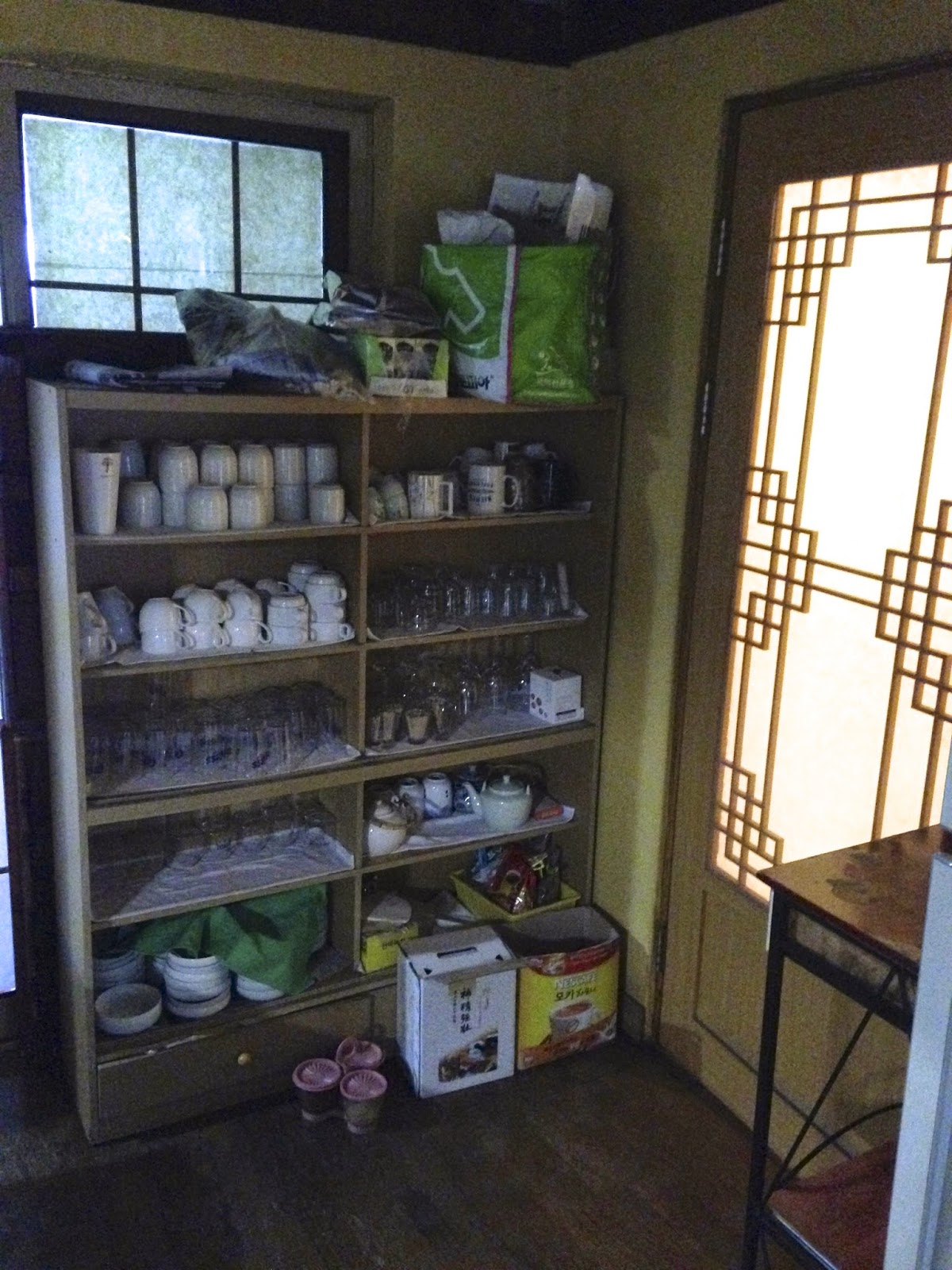 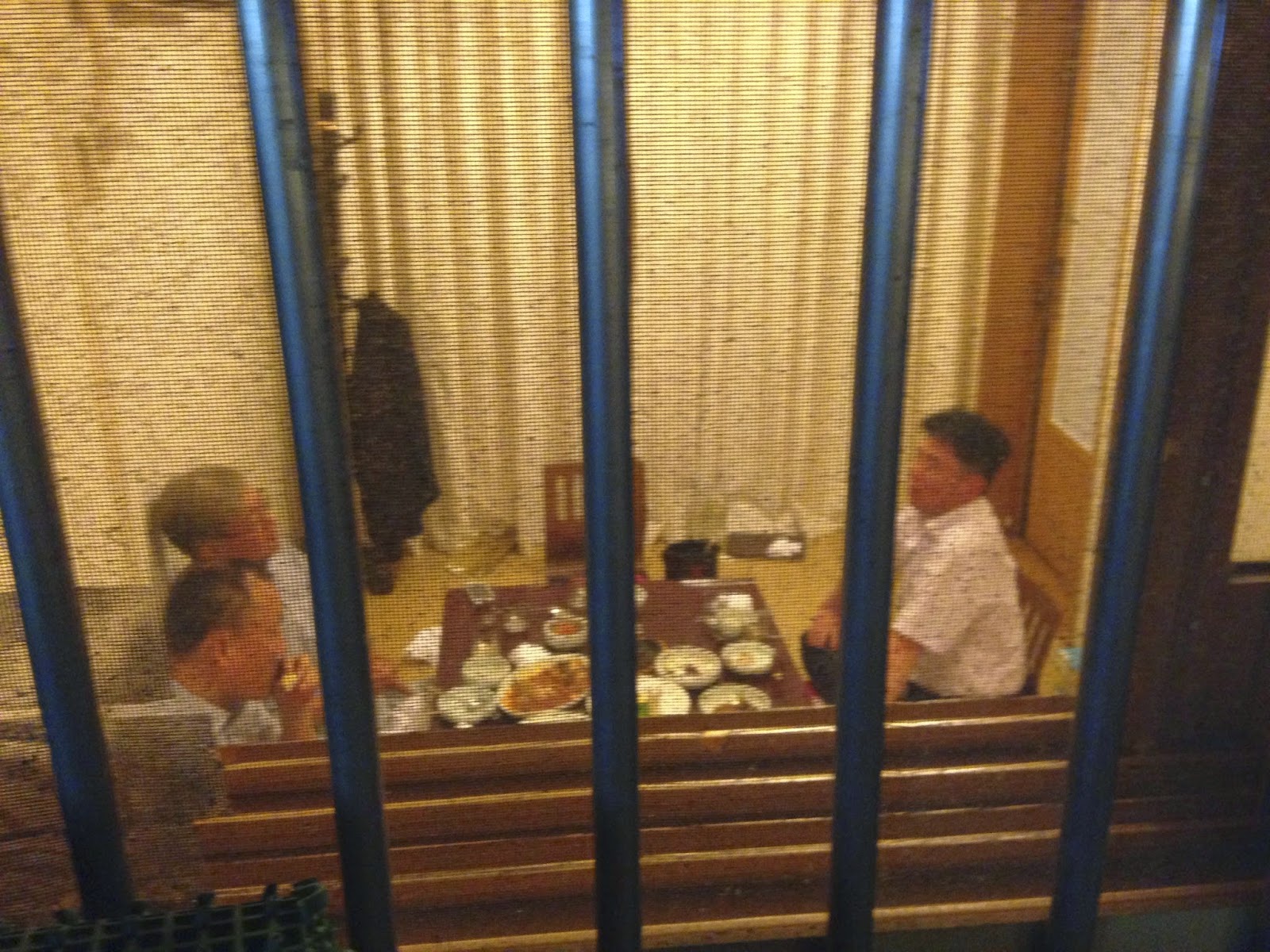 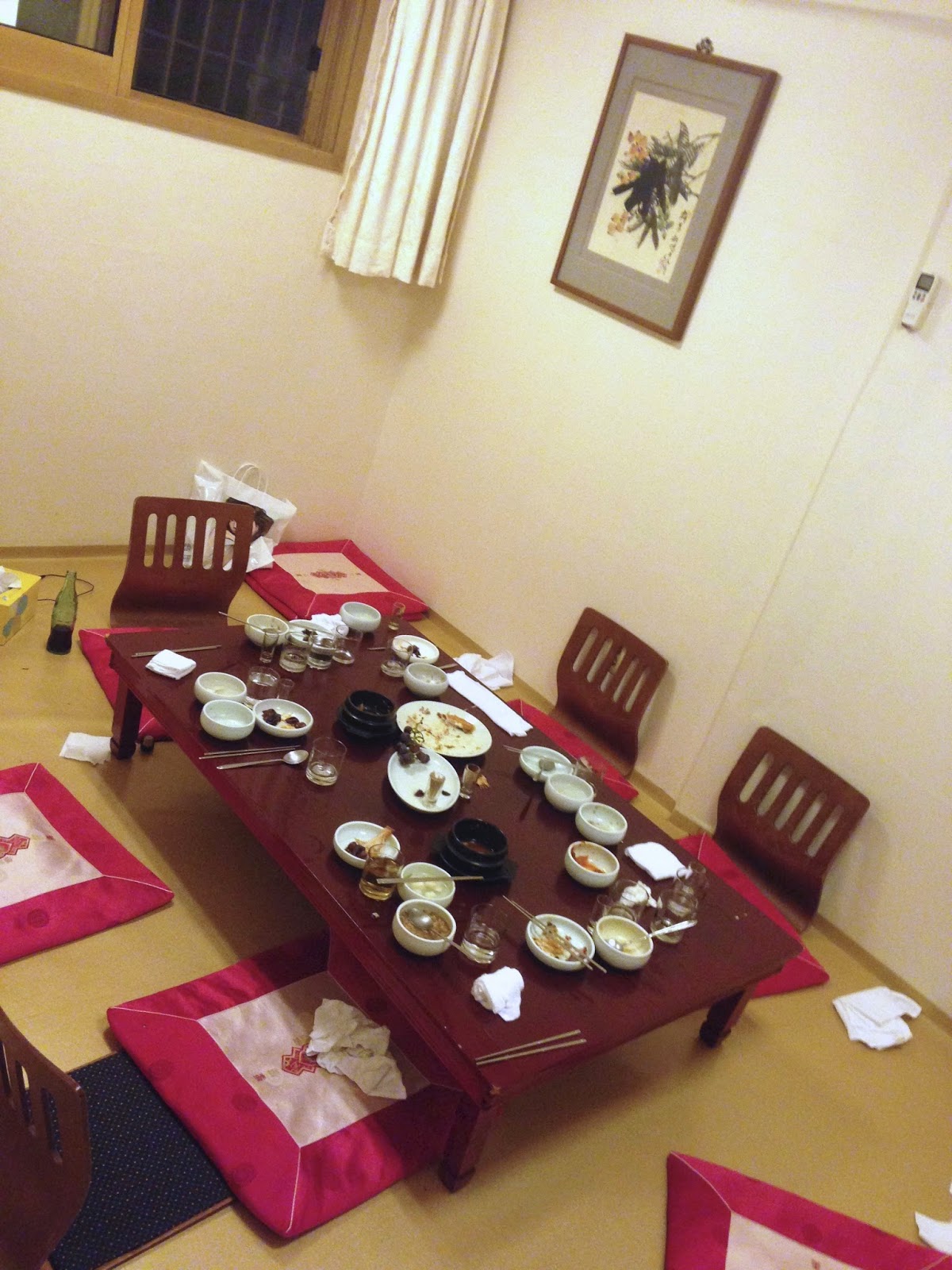 Bedrooms, now private dining rooms, built along the perimeter of the courtyard.

After the official dinner at the Press Center Building, the Koreans snuck out for a second late-night meal at Tai Hwa.  More for the booze than the grub.  We deserved to celebrate.

Booze aside, the food was really good.  Nothing particularly fancy, not in terms of ingredient, method, or presentation.  Just simple items, simply prepared, simply plated.  Kinda like home-cooking.  Everything deftly done, with skills honed through the decades.  I'm going back for more. 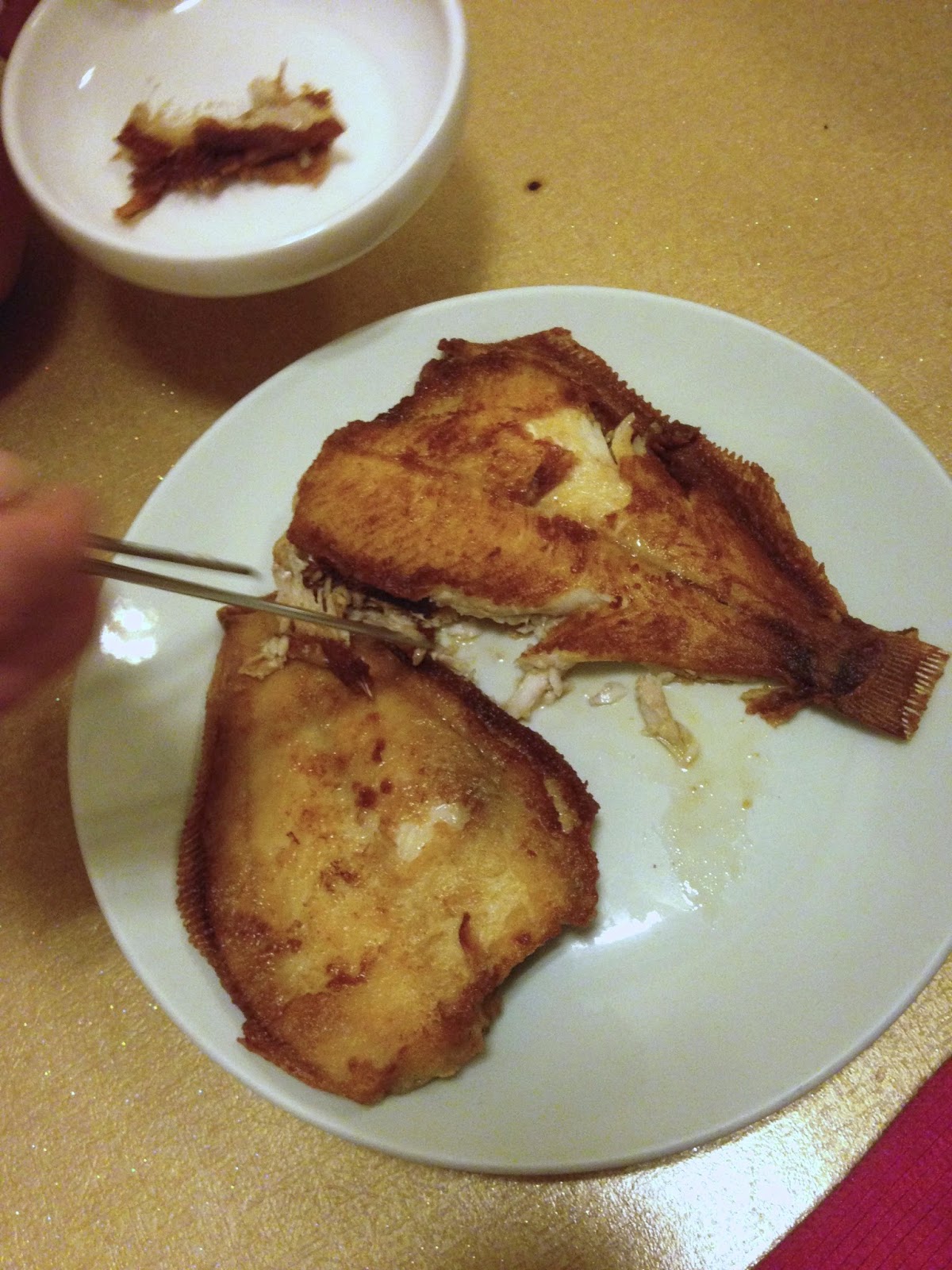 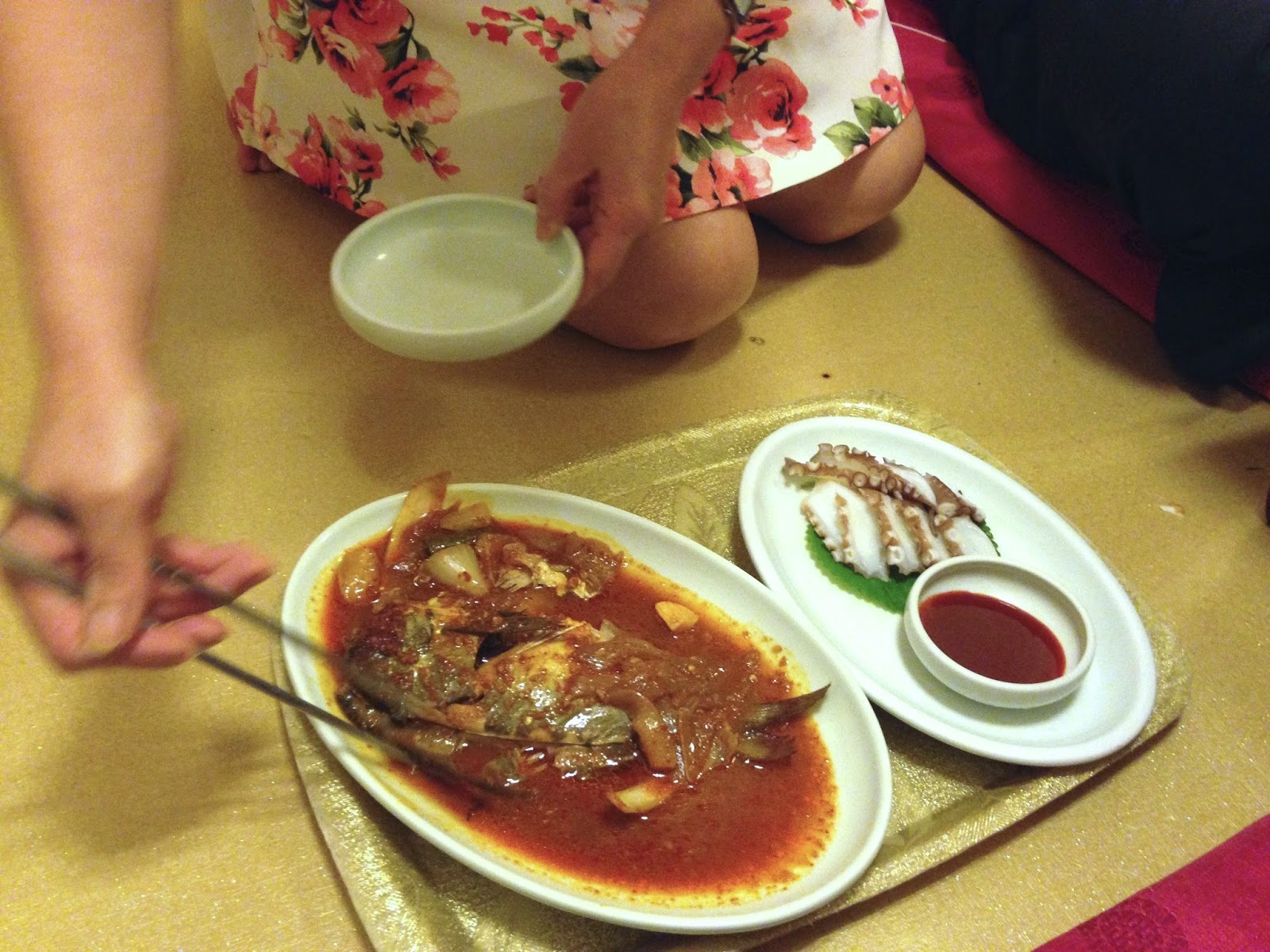 **The Boss, the consummate gourmand, has been host to some of the best meals that I've experienced in Manila (see for example 5.157 Angulas a la Vasca).  And now Korea.  I'd be honored to dine with him in renowned food cities, like Osaka, Singapore, Hong Kong, not to mention food countries like France, Italy, Spain. 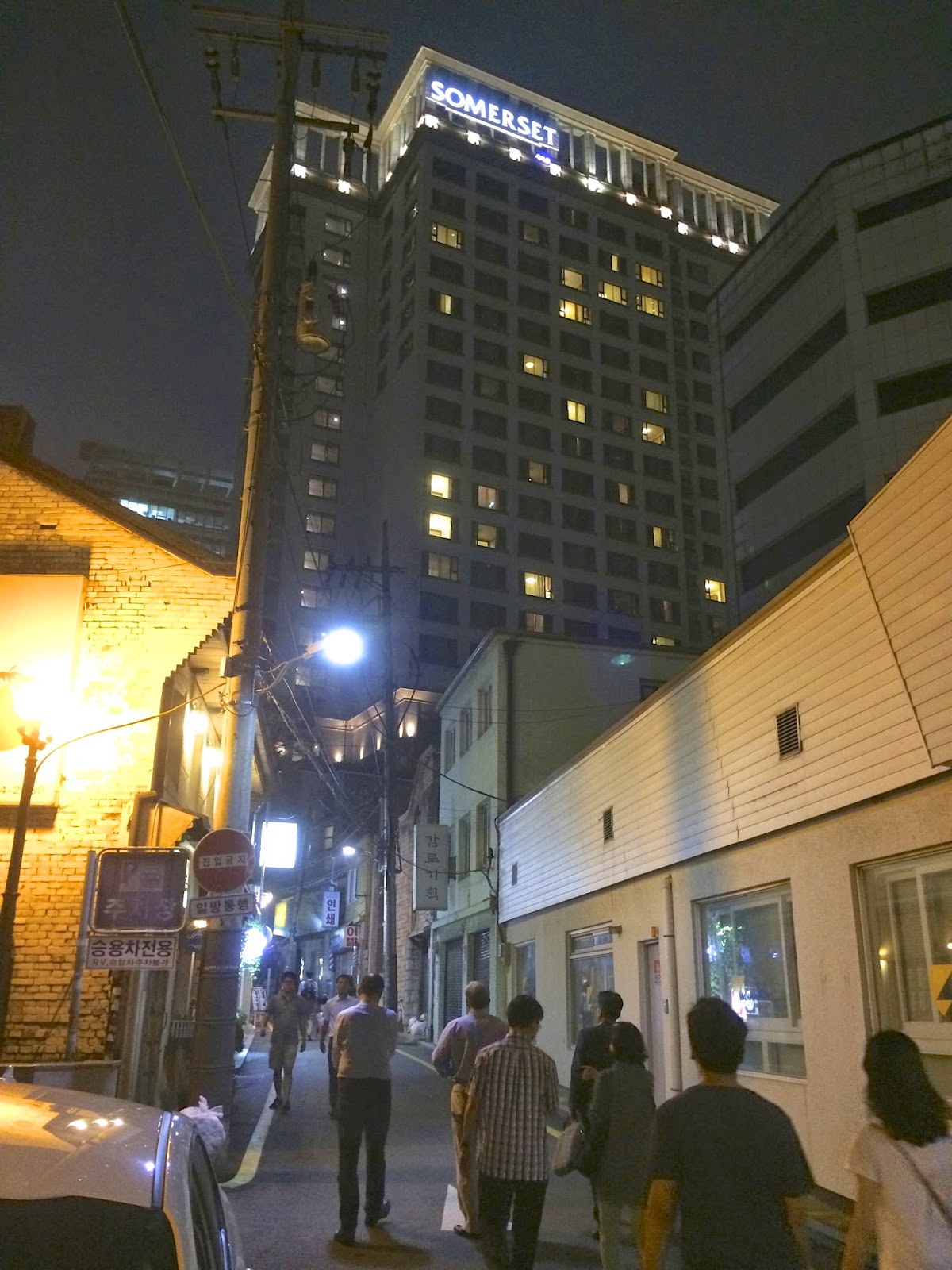