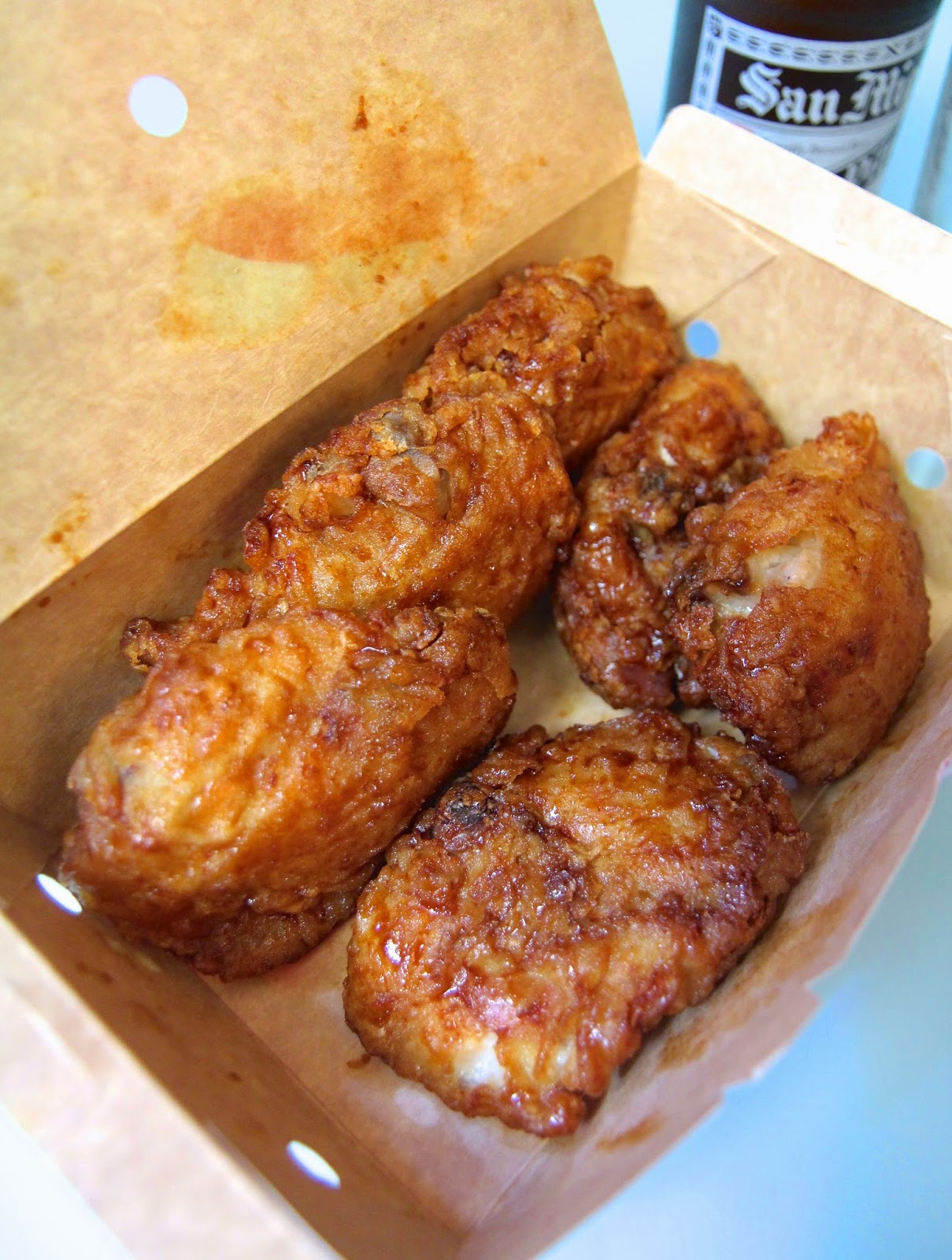 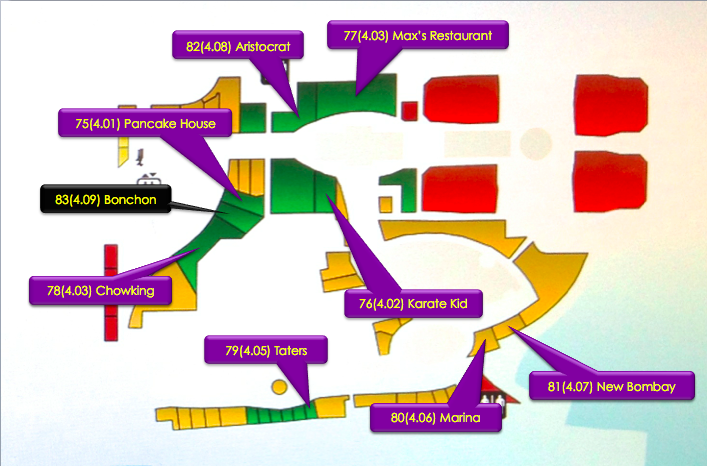 All restaurants on the 3rd floor: 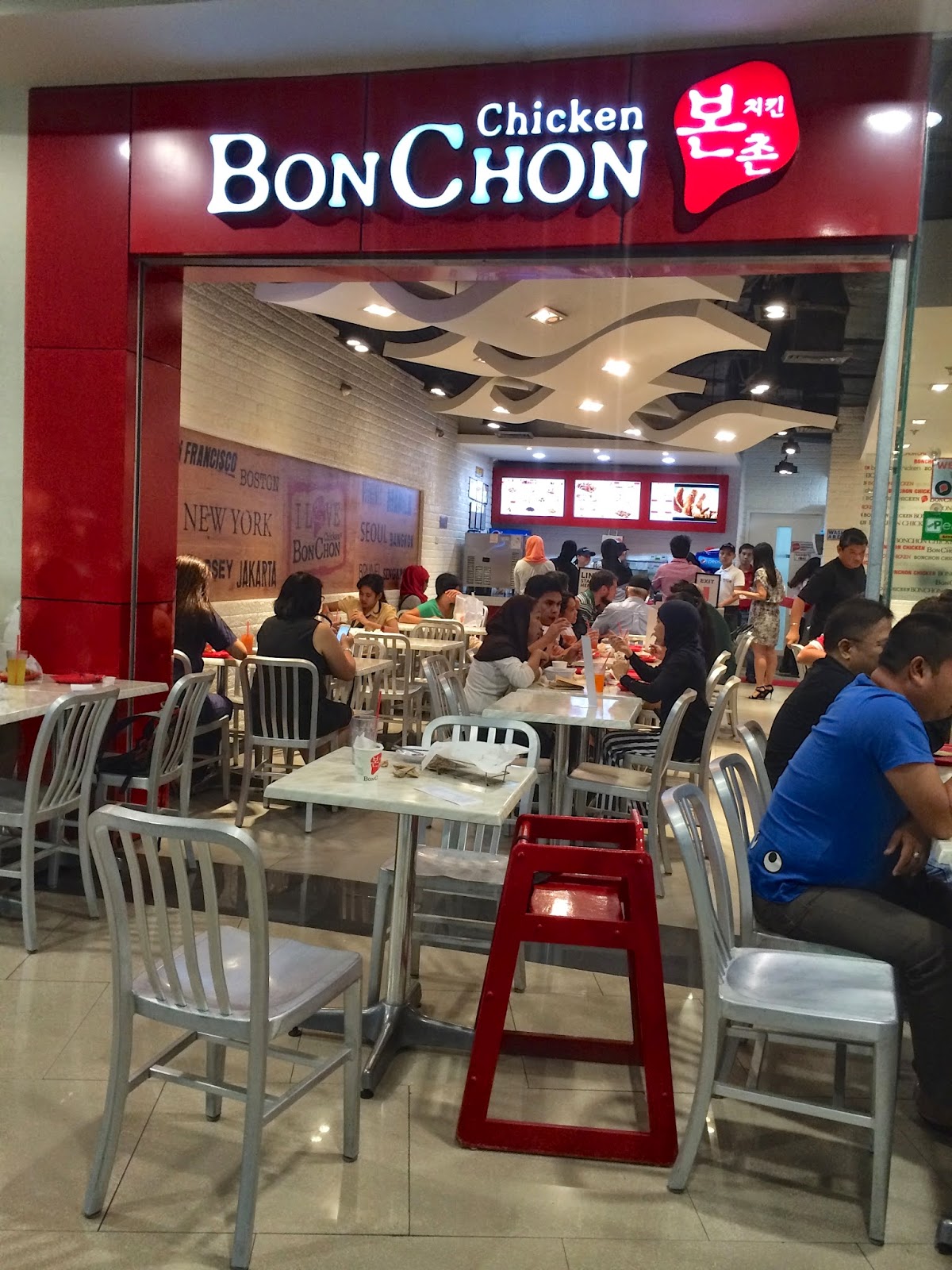 Bonchon is a Korean restaurant chain.  Founded 2002, in Busan, Republic of Korea.  Currently over 10 locations in Korea, over 20 in the States, over 60 in the Philippines, a few in Thailand and in Indonesia.  Specializes in fried chicken but also offers other vaguely Korean-ish dishes.  While the name of the business translates to "home (bon) town/village (chon)," the "bon" could also mean "original," which would be ironic, as explained below.

Being Korean, we couldn't be expected to eat fried chicken without beer.  Beer is on the menu, but the restaurant didn't have any available for sale.  They also wouldn't allow BYOB (bring your own bottle/booze). So, we got the fried chicken and a few other items to go and ate it back at my apartment. 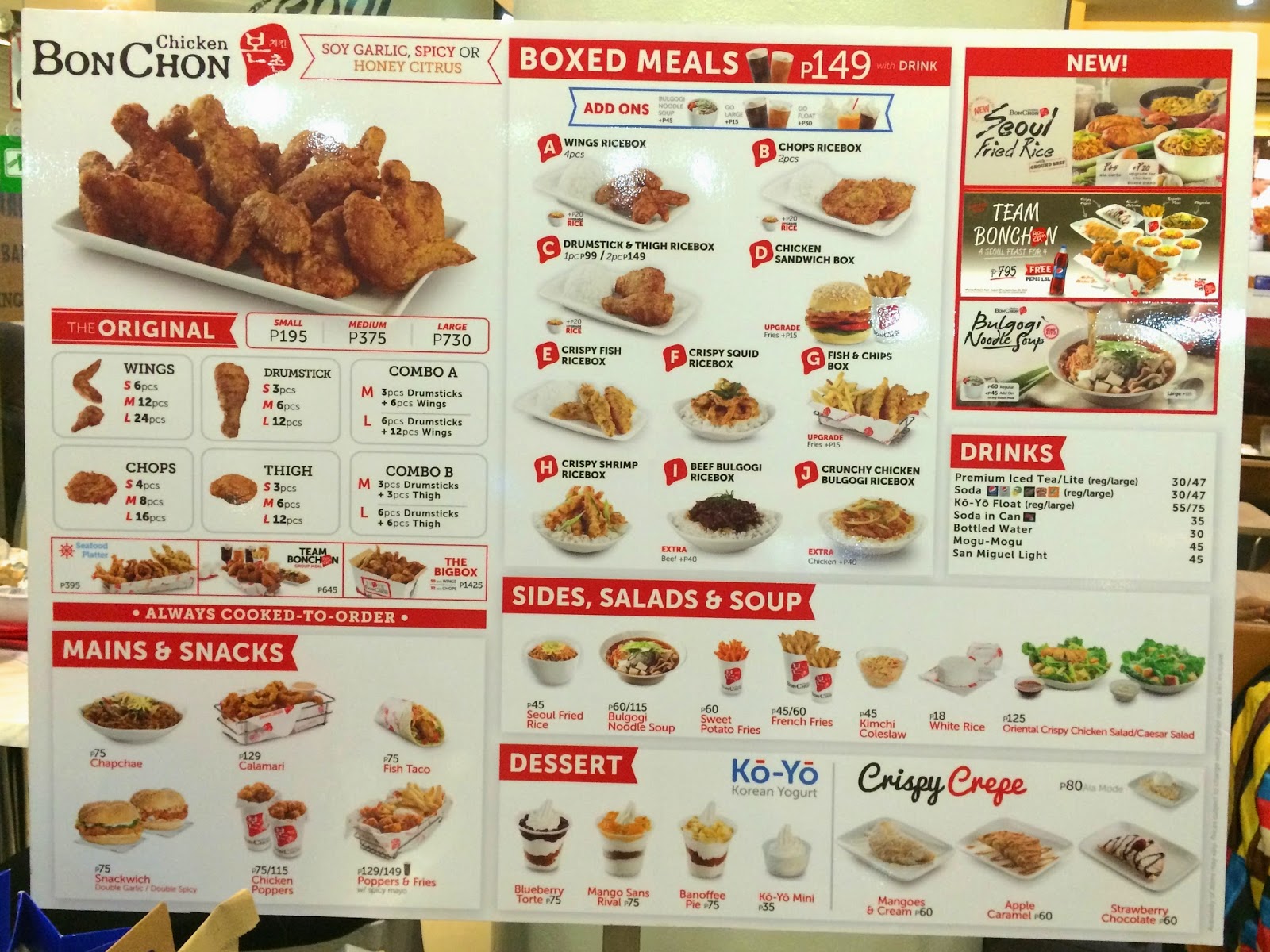 The restaurant allows the customer to choose from breast (chop), wing, thigh, drumstick, no price differential among the different parts. 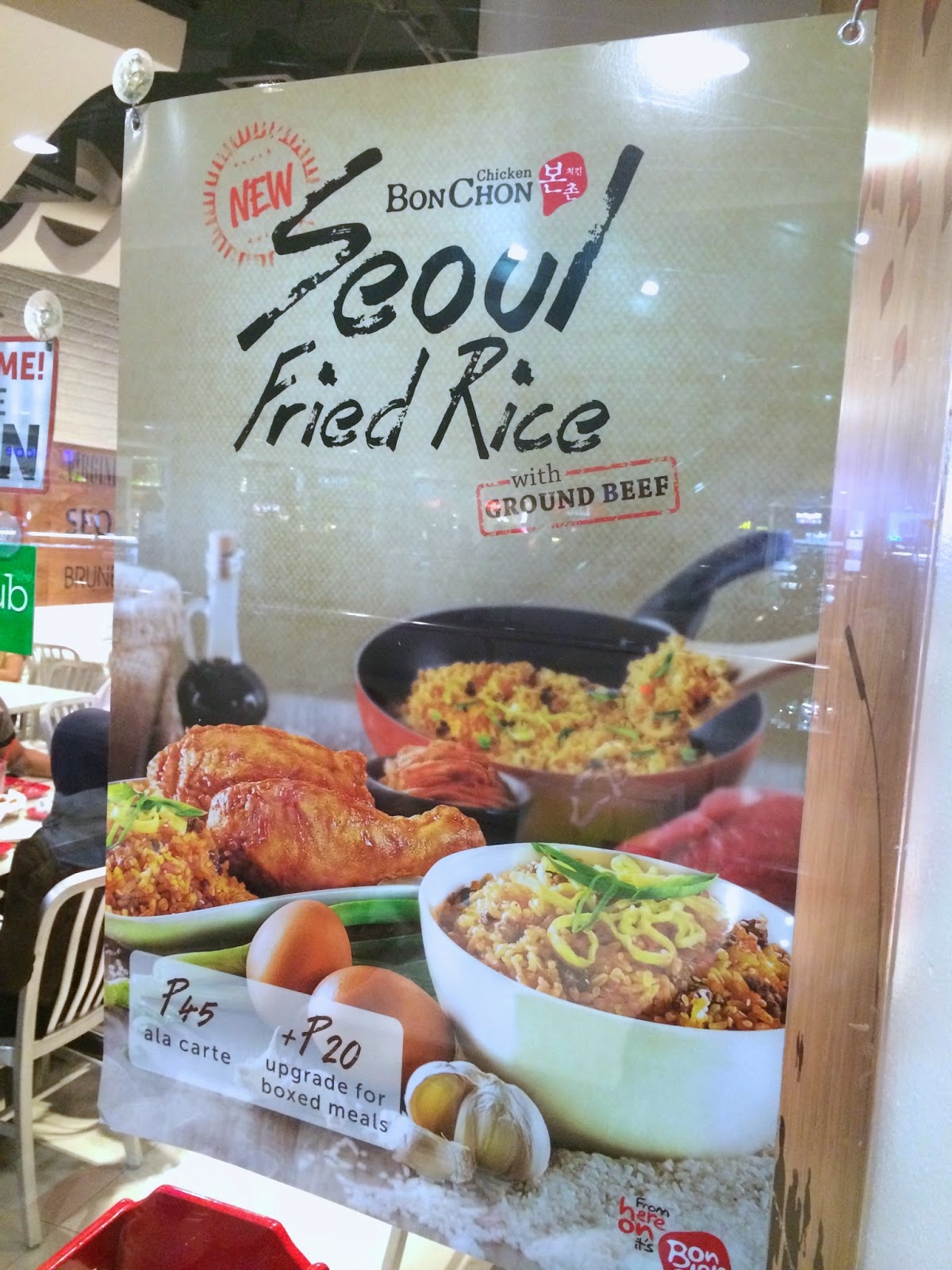 Koreans love to make up weird crap and randomly attribute it to various countries (see for example 3.170 Taste of Africa), so now they're doing it to themselves.

The chicken was excellent.  The skin was perfectly crispy, maintaining its texture through the transport to the end of the meal.   Within, the flesh was juicy and tender.  Marinated in soy garlic sauce, exactly like that of the chicken from similarly named and iconic fried chicken chain Kyochon--which is a good thing, maybe (see generally 4.094 Original Soy-Garlic Chicken)--the flavor was sweet and savory.  But maybe we'd ordered too much, and too many of the same part, because it got kinda heavy after awhile--though that's how I often seem to feel after a couple pieces of Kyochon.  I wouldn't necessarily object to trying it again. 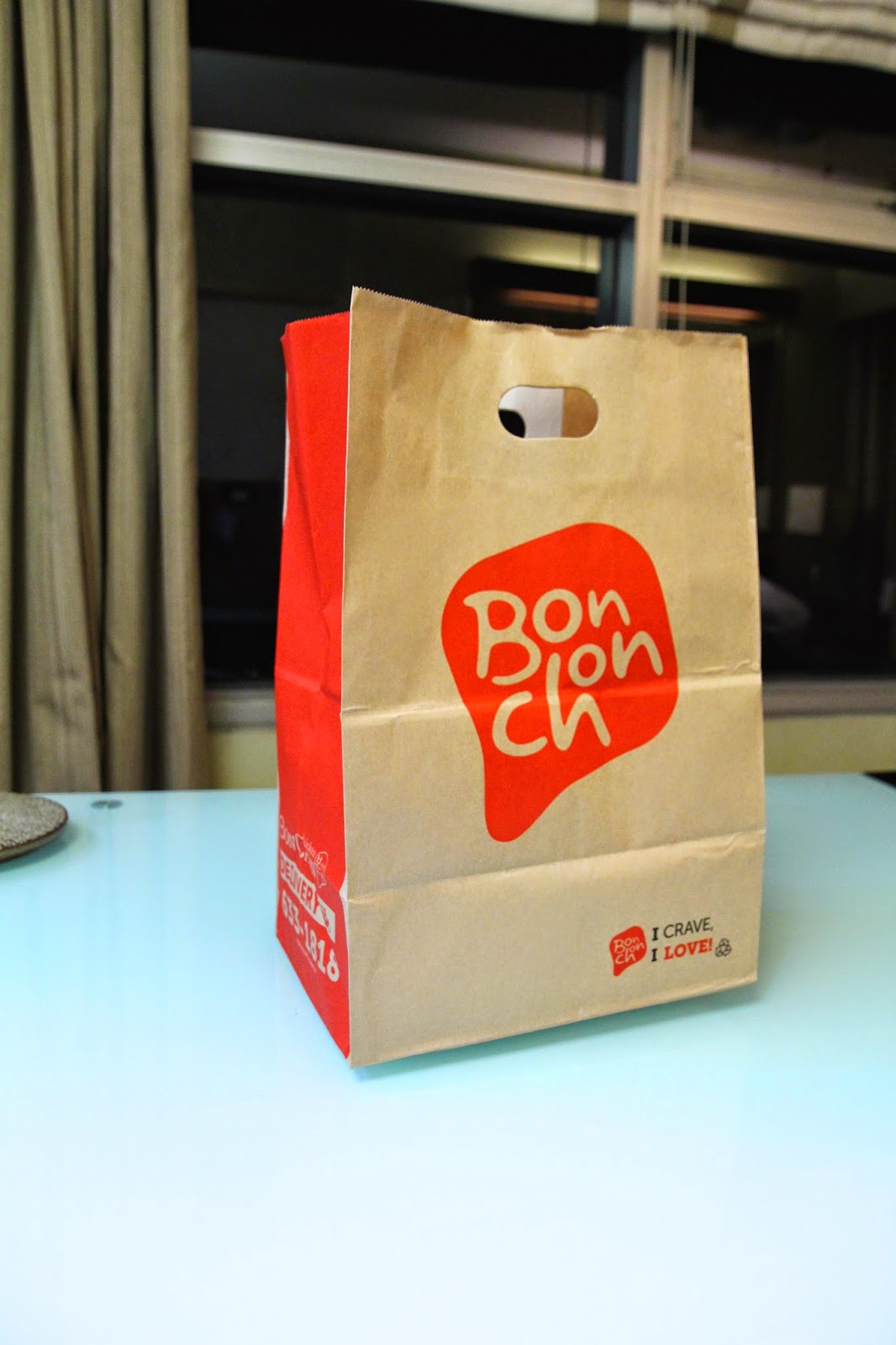 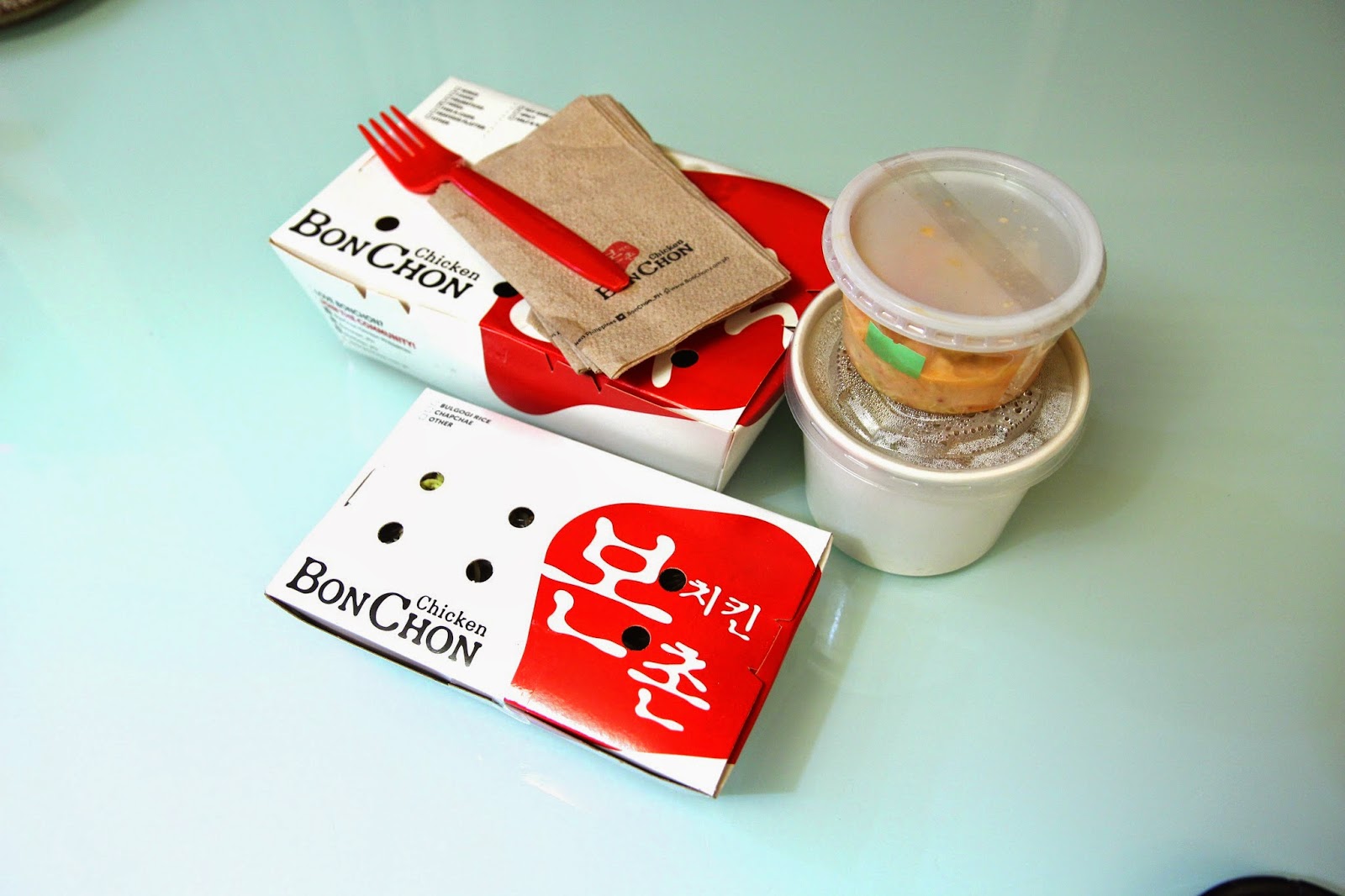 The holes in the box allow steam to escape, helping to prevent the chicken from getting soggy. 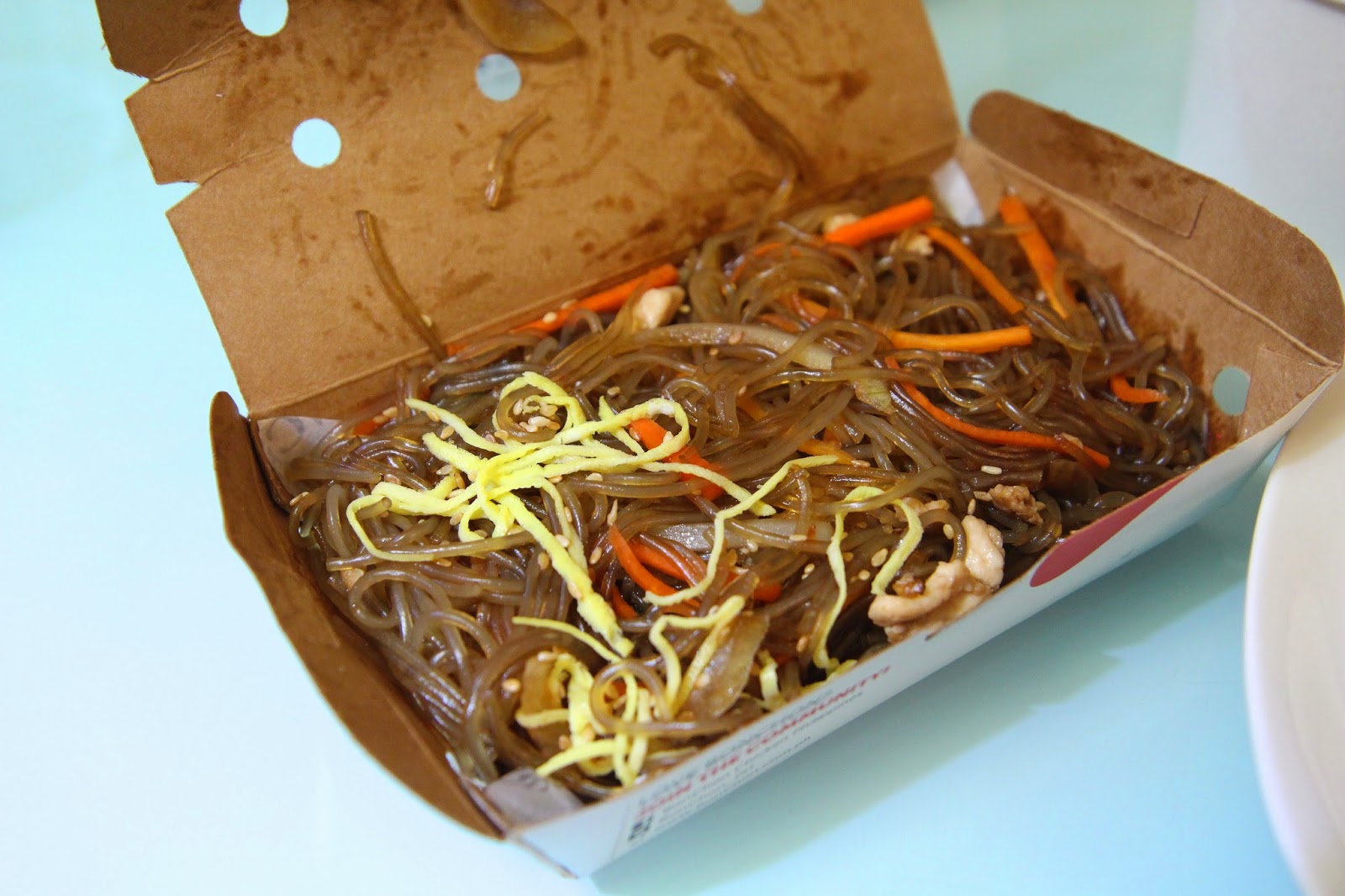 Japchae (0.0/2.5)--generally not too bad, actually tasting like authentic if cheap japchae (in Manila, it's usually made to taste somewhat like Chinese chowmein), but the spinach (not visible in the photo) was a bit off. 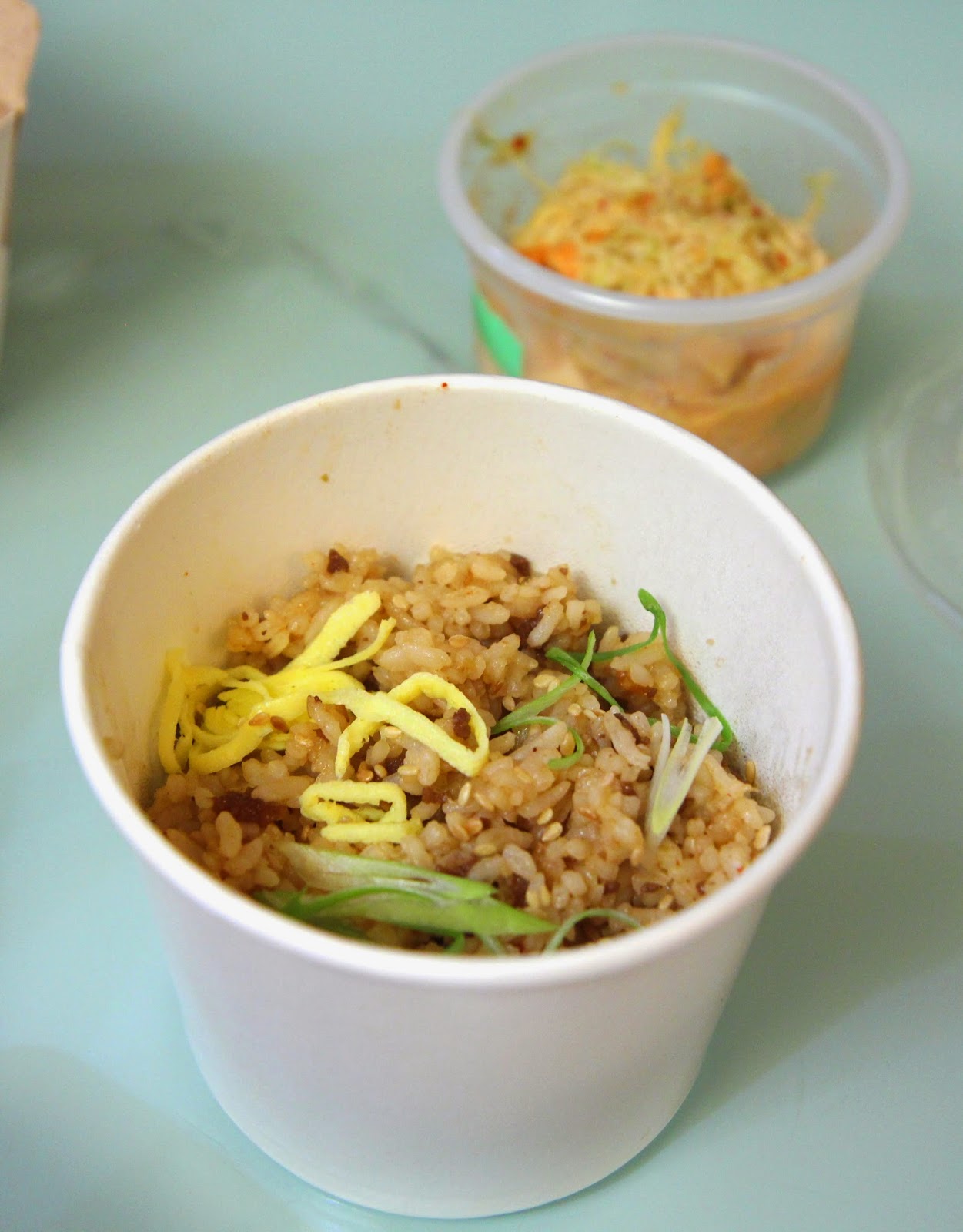 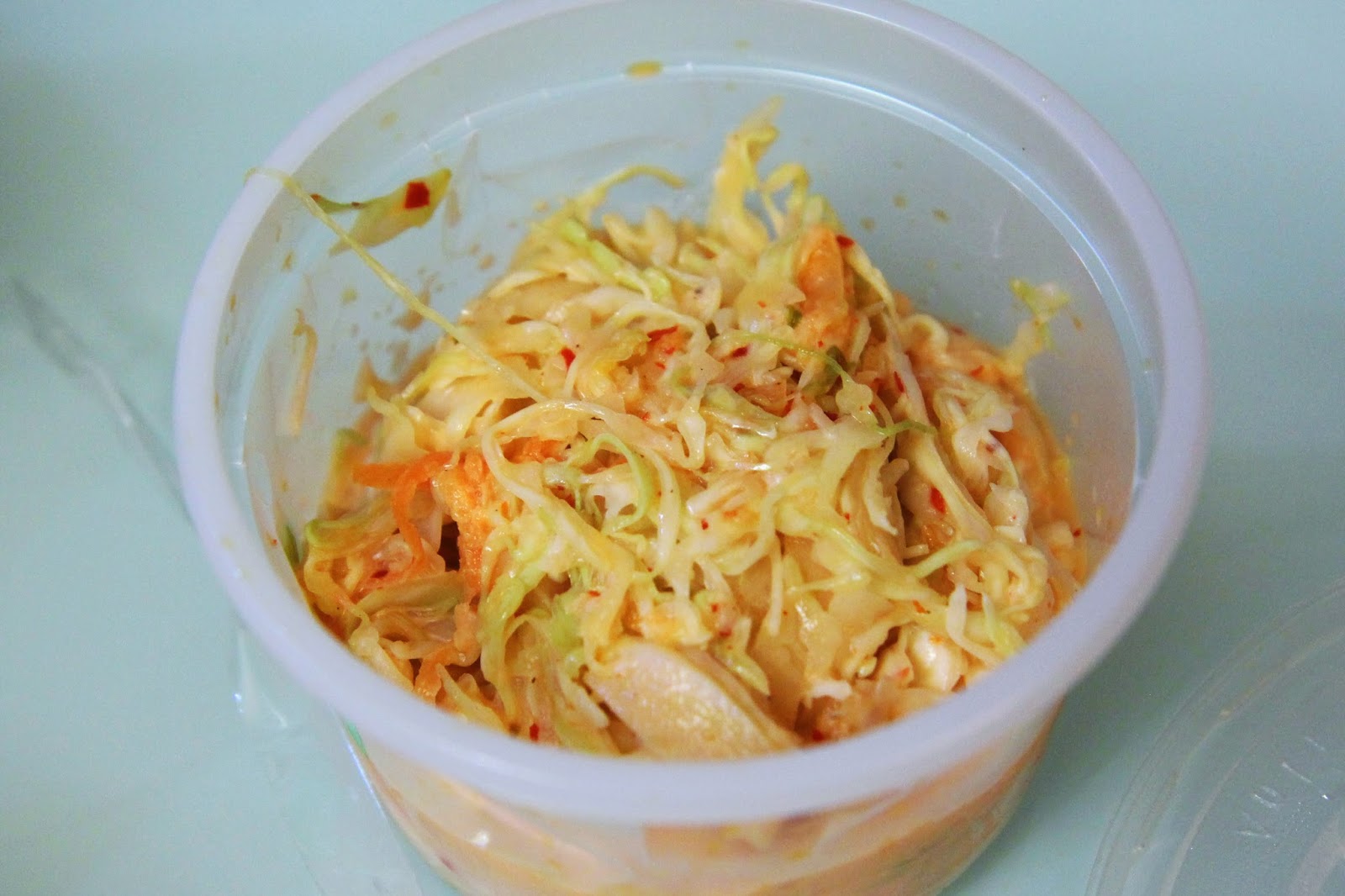 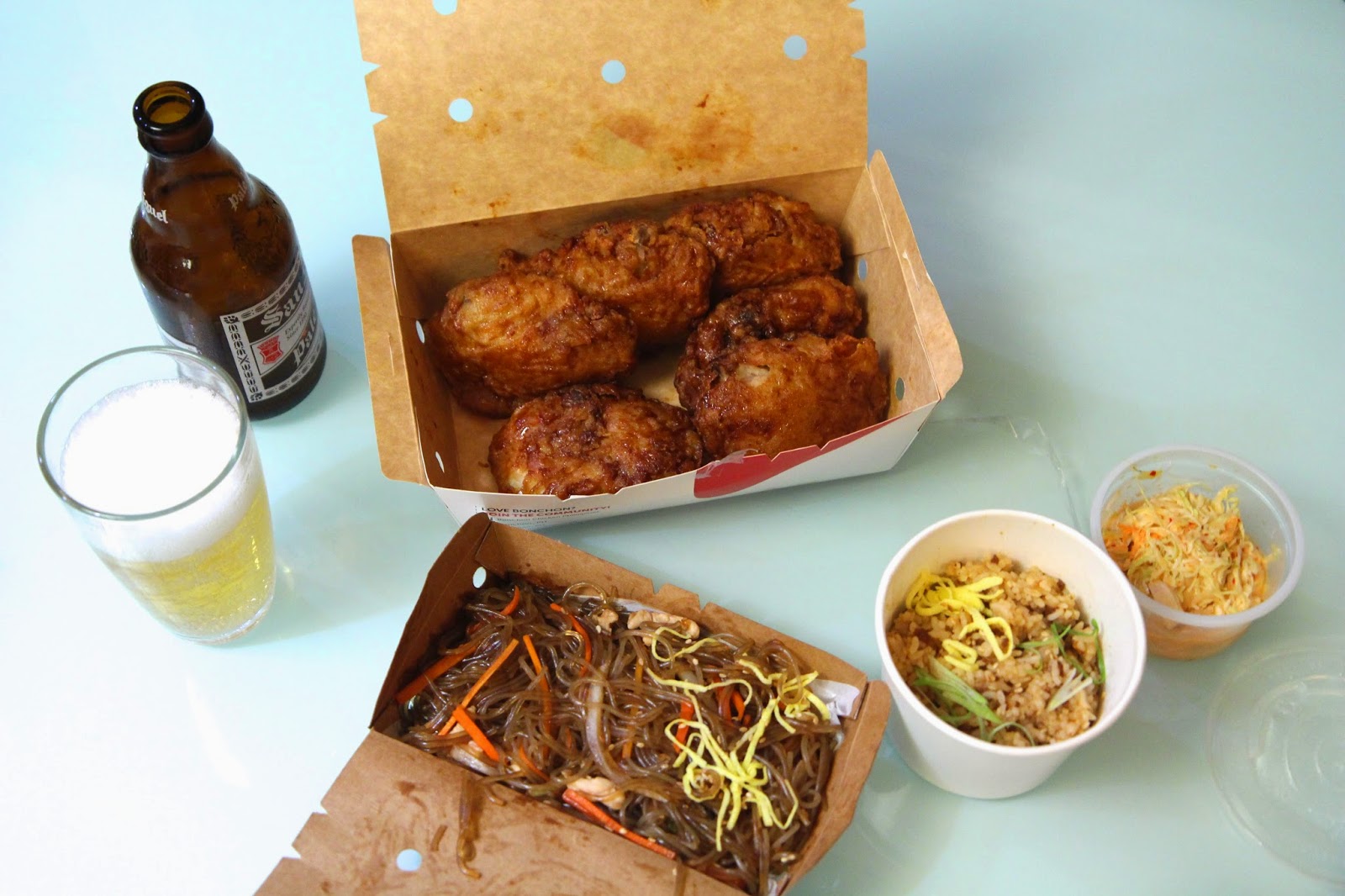