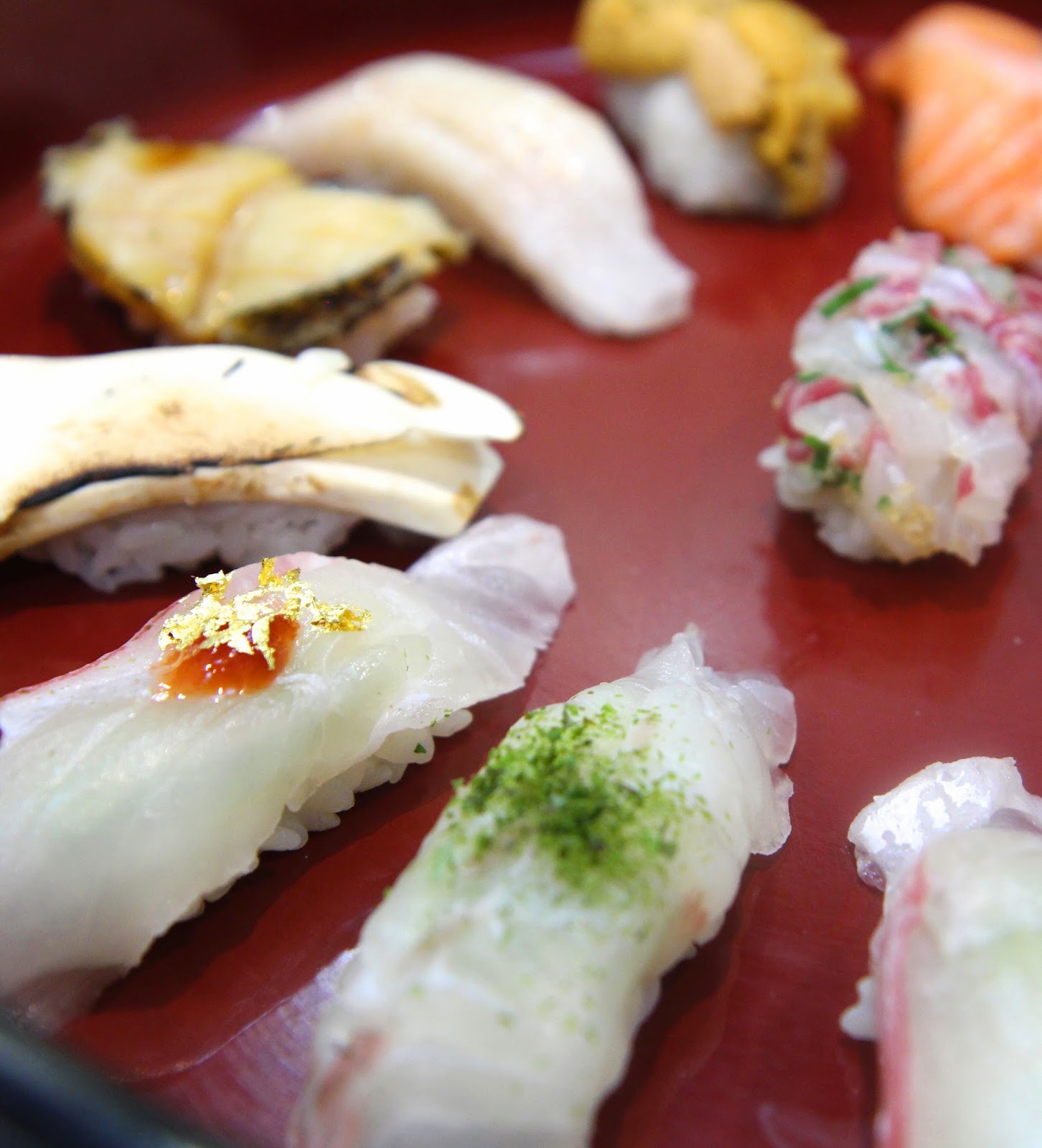 Aoyama is a Japanese restaurant.  Located in Cheongdam.  Somewhat high end, private rooms only.  While the menu does offer some à la carte items, the emphasis is on various full course sets, more or less the same in structure, starting with small appetizers, followed by sashimi and other delicacies, ending with tempura and noodles/rice, the main difference between sets being the premium of ingredients (e.g., cut of fish) involved.  On weekends, the restaurant offers the lunch course for dinner, all the goodies at half the price.  Something of an institution, the establishment has been doing steady business in the same unassuming back alley location for over 20 years. 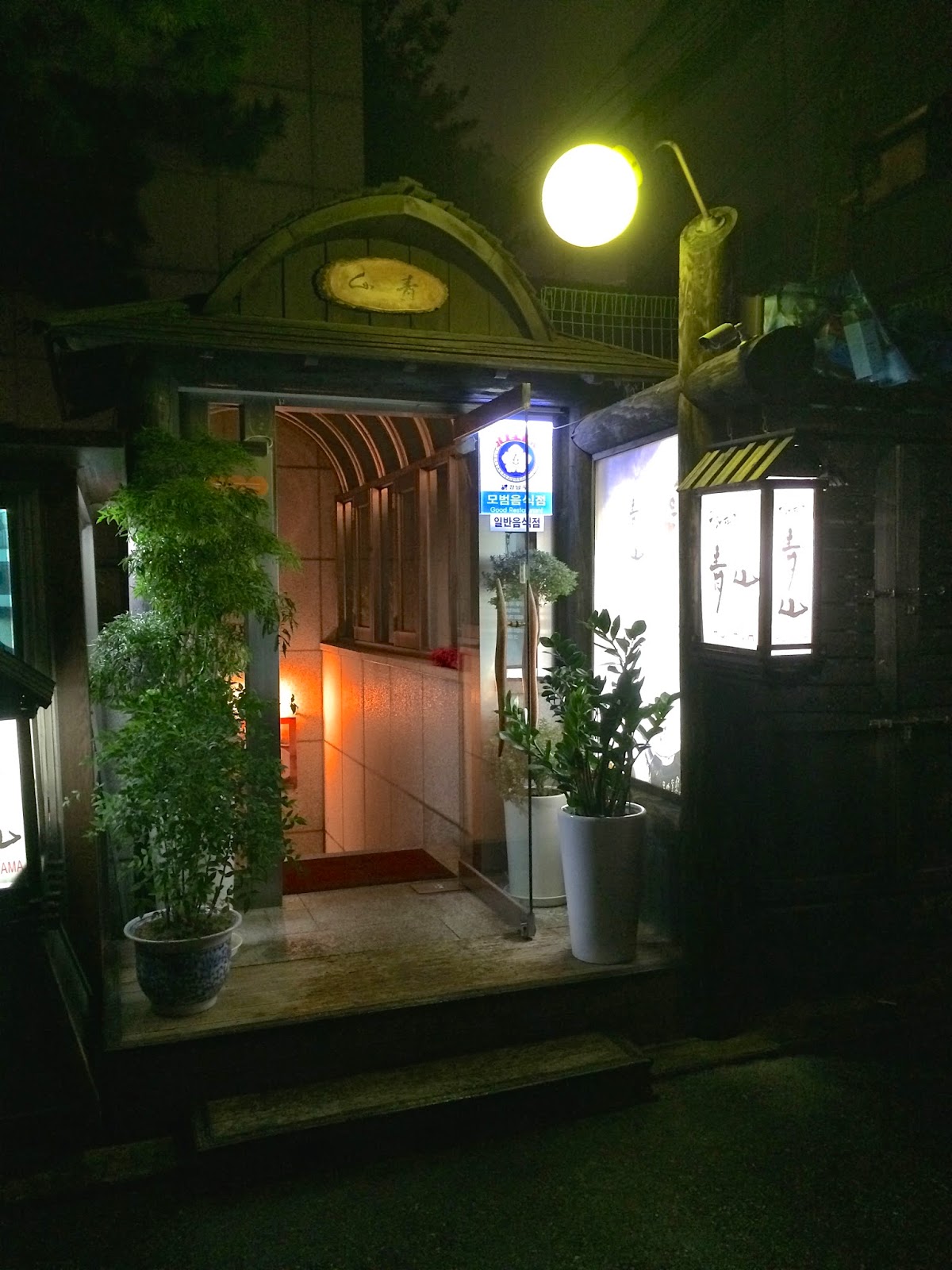 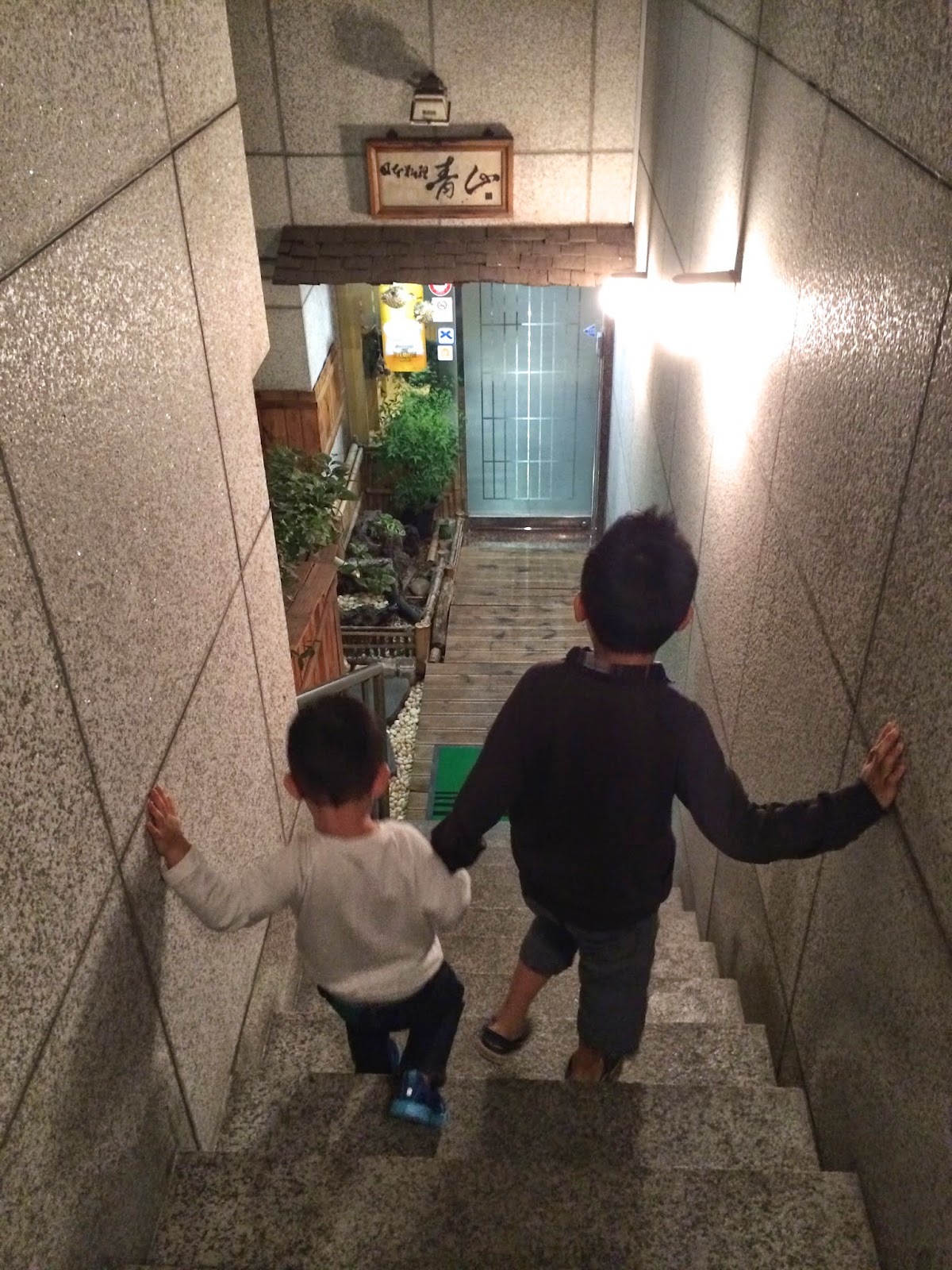 My family has been acquainted with the owner for nearly 30 years.  At first, we got to know him back in the late 80s when he was the head sushi chef of a restaurant that we used to frequent.  Eventually, he opened Aoyama on his own in the mid-90s.  By coincidence, soon thereafter, my parents moved into a house a couple blocks away, where they lived for several years, during which time they were regulars at the restaurant, me too whenever I was in town.  Since they moved out of the neighborhood over ten years ago, I can recall visiting Aoyama just once, prior to this evening--no reason beyond distance. 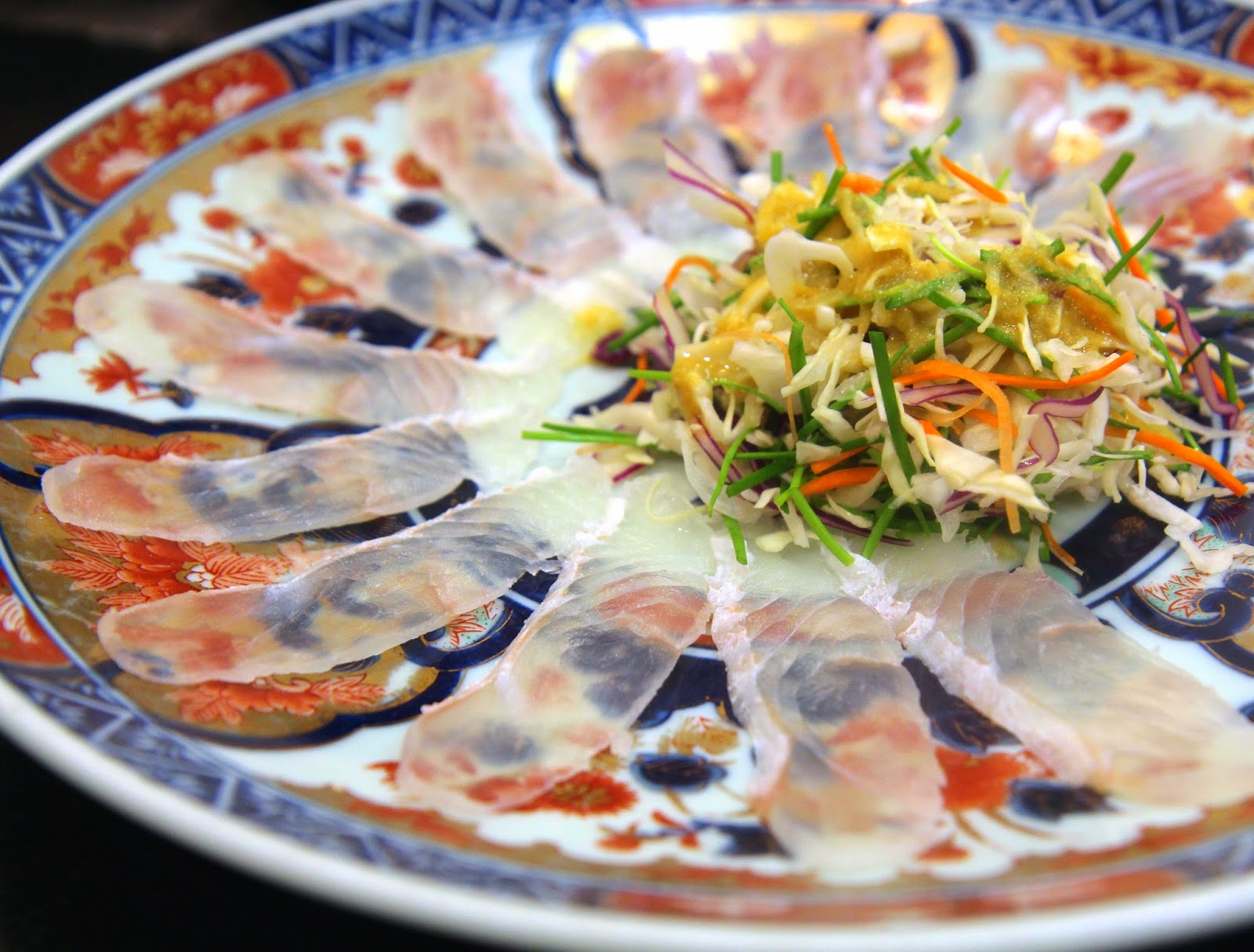 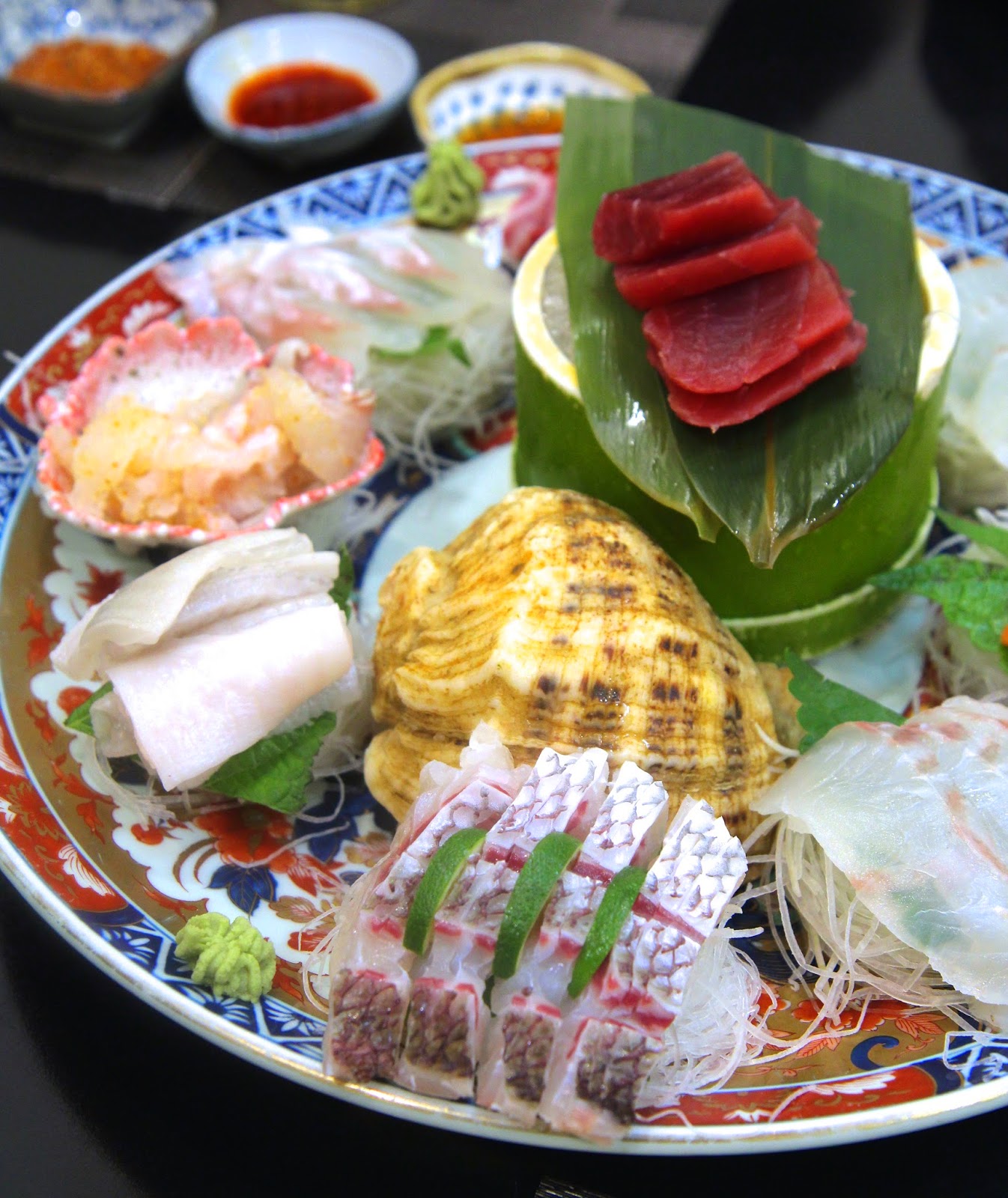 The food remains excellent.  The owner was so happy to see me, and even happier to learn that my son, who hadn't yet existed at the time of my prior visit, had grown up to develop a fondness for Japanese cuisine, that he went out of his way to prepare a special course meal for all of us.  He even sprinkled gold flakes on a piece of sushi.  Good to be back.

As mentioned in a recent post, Manila lacks good Japanese cuisine, especially sushi/sashimi (5.250 Assorted Sushi), so I should remember to visit Aoyama more often, whenever my short schedule in Seoul permits. 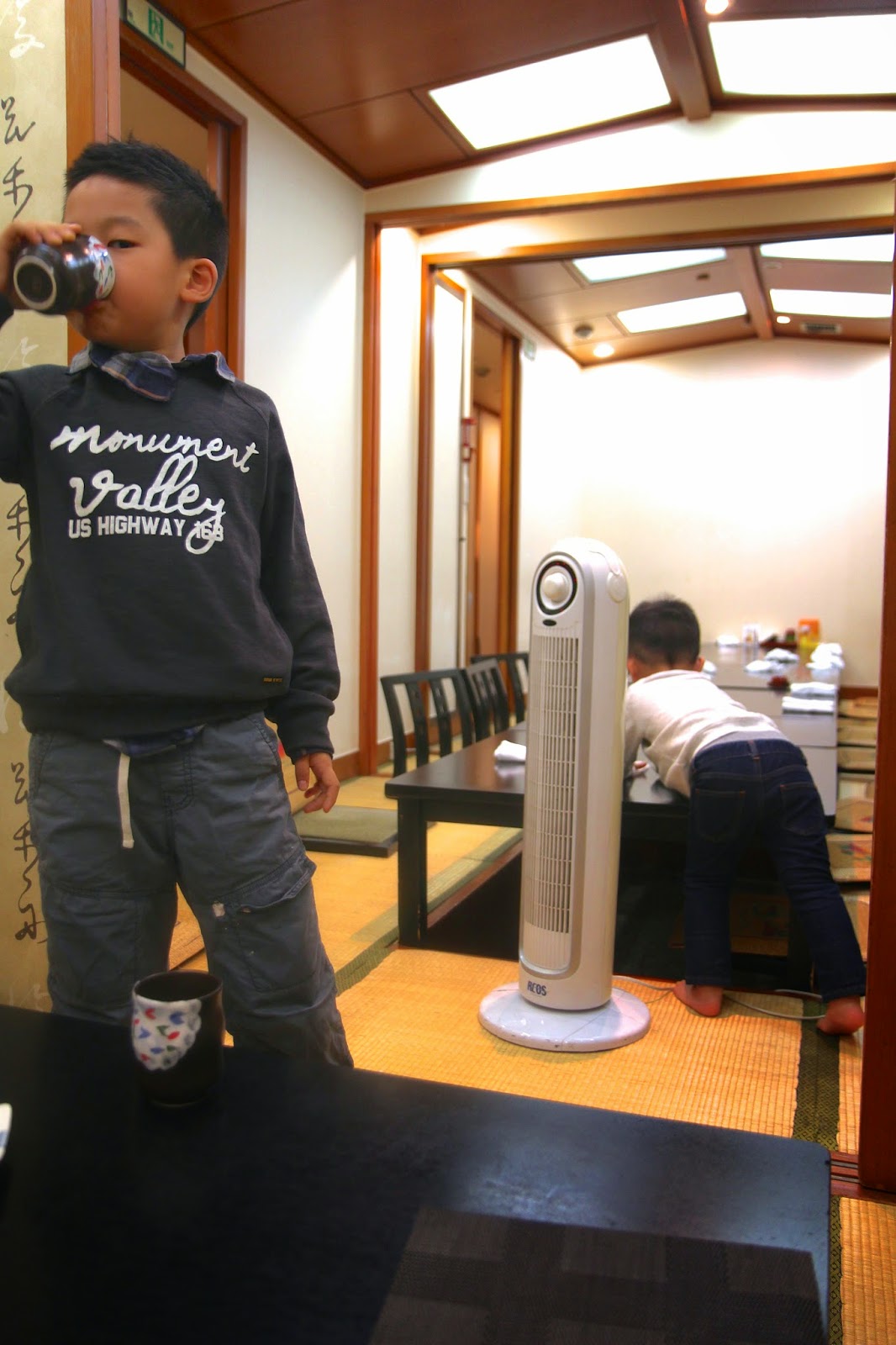 One of Mo's favorite pastimes, especially in restaurants, is cleaning. 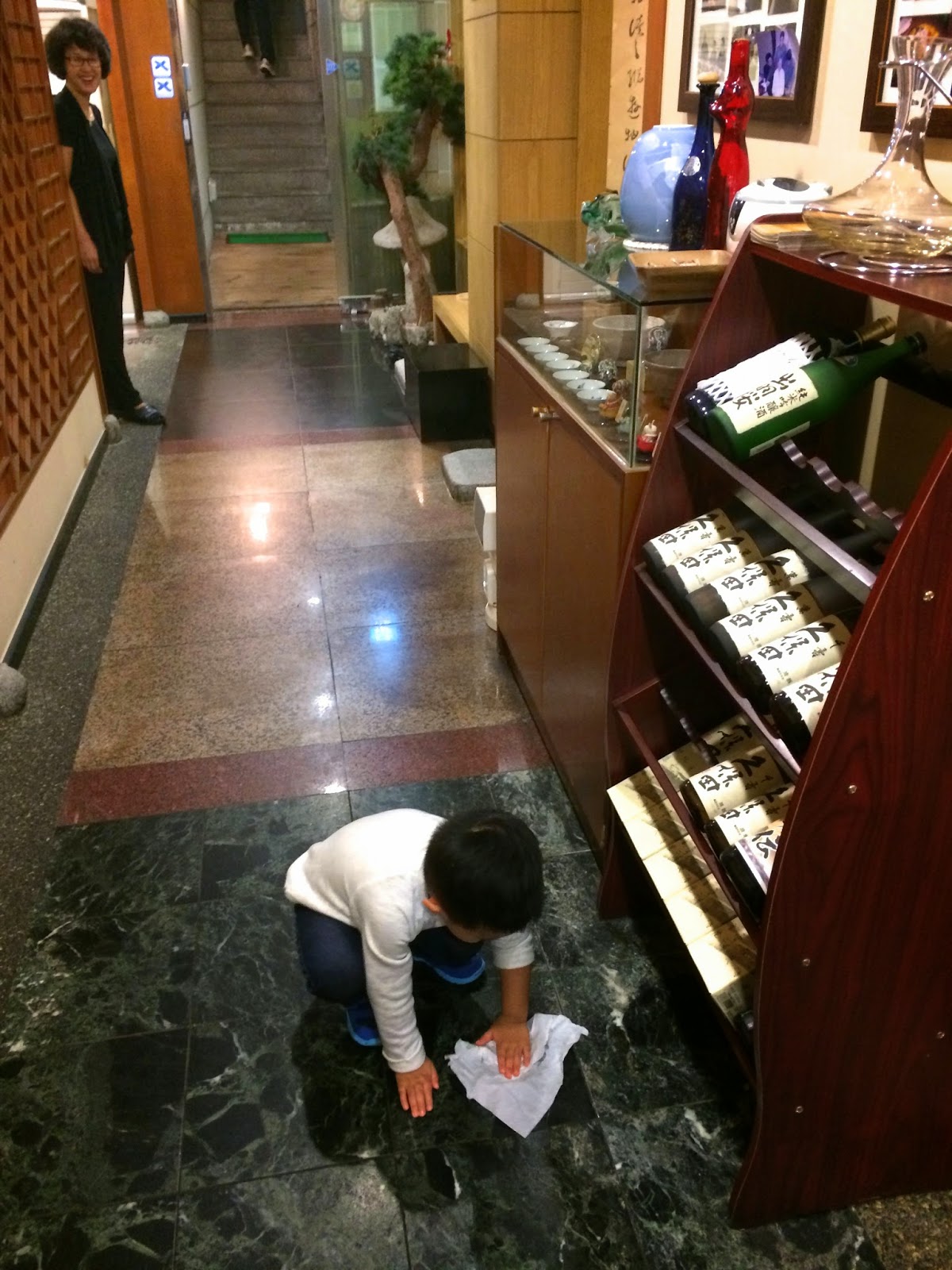 The primary purpose of this trip home was to facilitate shamanistic memorial rituals.  Every year, the paternal-side family takes a trip to the cemetery where my grandparents are interred.  Usually sometime during the fall, around Chuseok.  Previously, we'd go through the motions and get out of there as quickly as reasonably respectable, unable/unwilling as most Koreans are to sit out in the sunlight for very long, even under the not-so-blistering rays of autumn.  But in recent years, after I started camping, the setup has involved pitching a tarp, which allows us to enjoy a leisurely lunch in the shade among the spirits.  Although I hadn't really planned on going back to Korea this weekend, my mother begged me to come, if only for my tarp-pitching expertise. 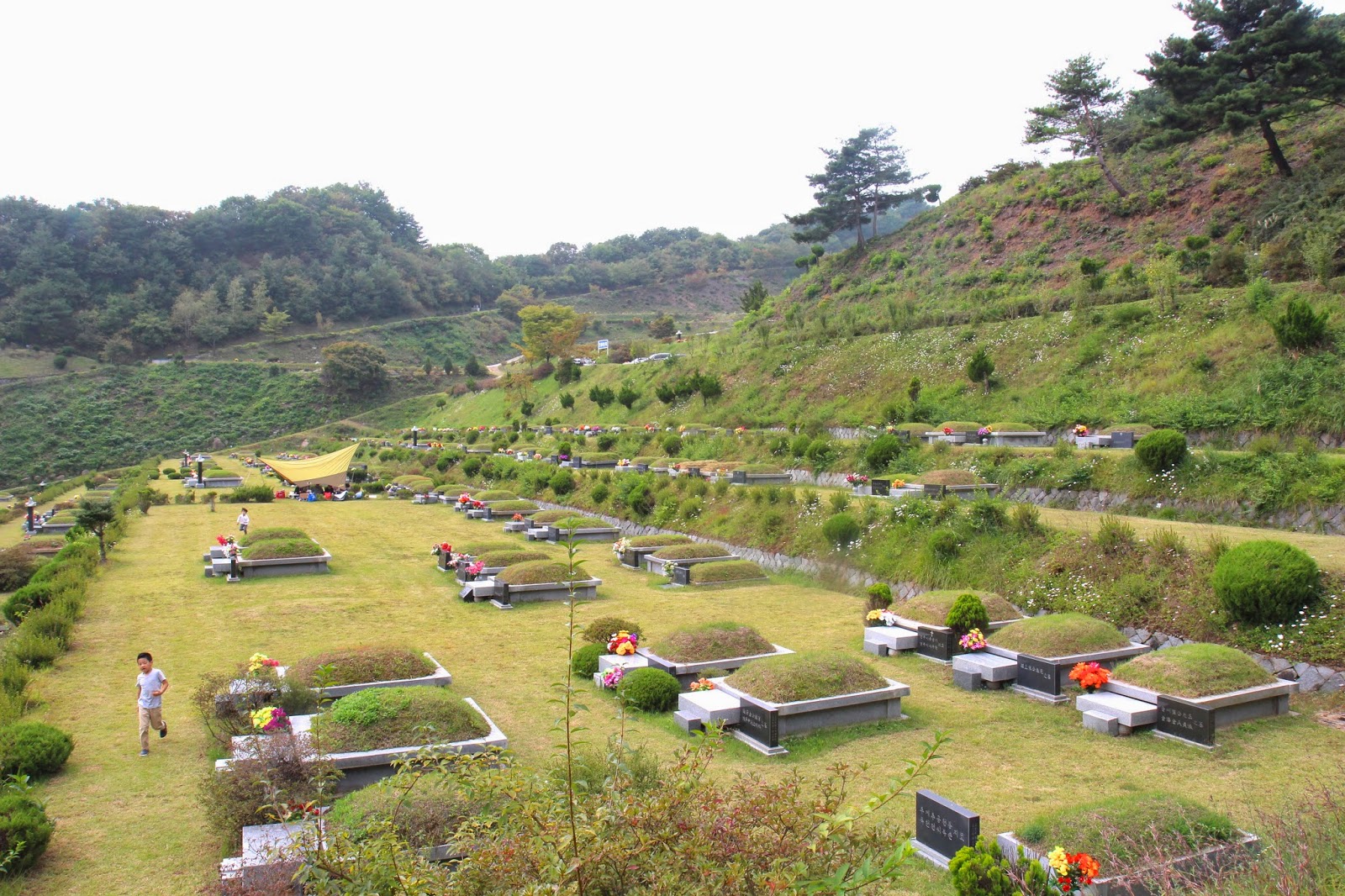 Traditionally, Korean cemeteries are built into carved out mountainsides; each monument represents an individual grave, though the bodies are below ground. 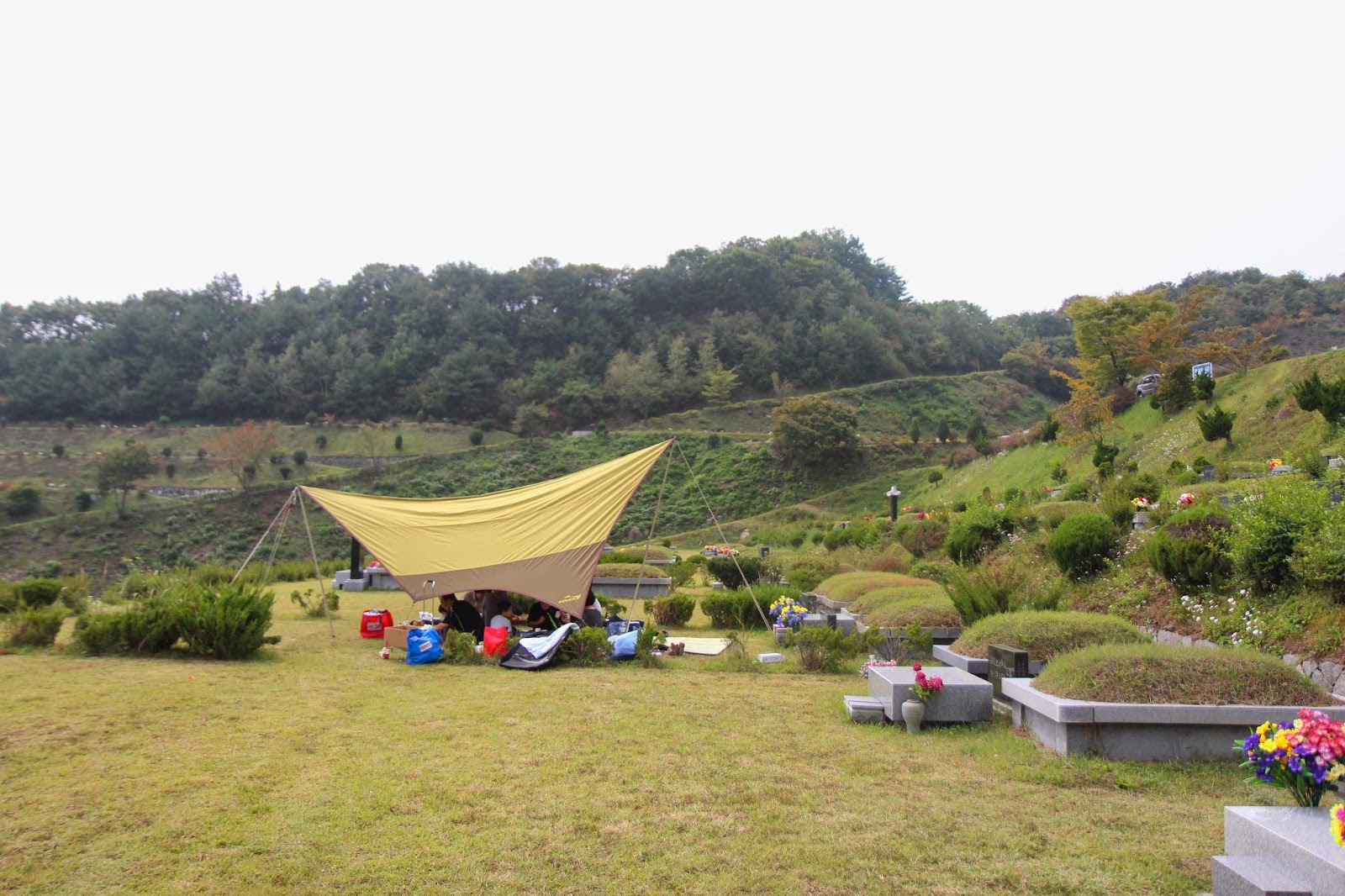 The plot of land includes spots for my grandparents, my parents, and my father's younger brother and wife (the other siblings, sorry, no room). 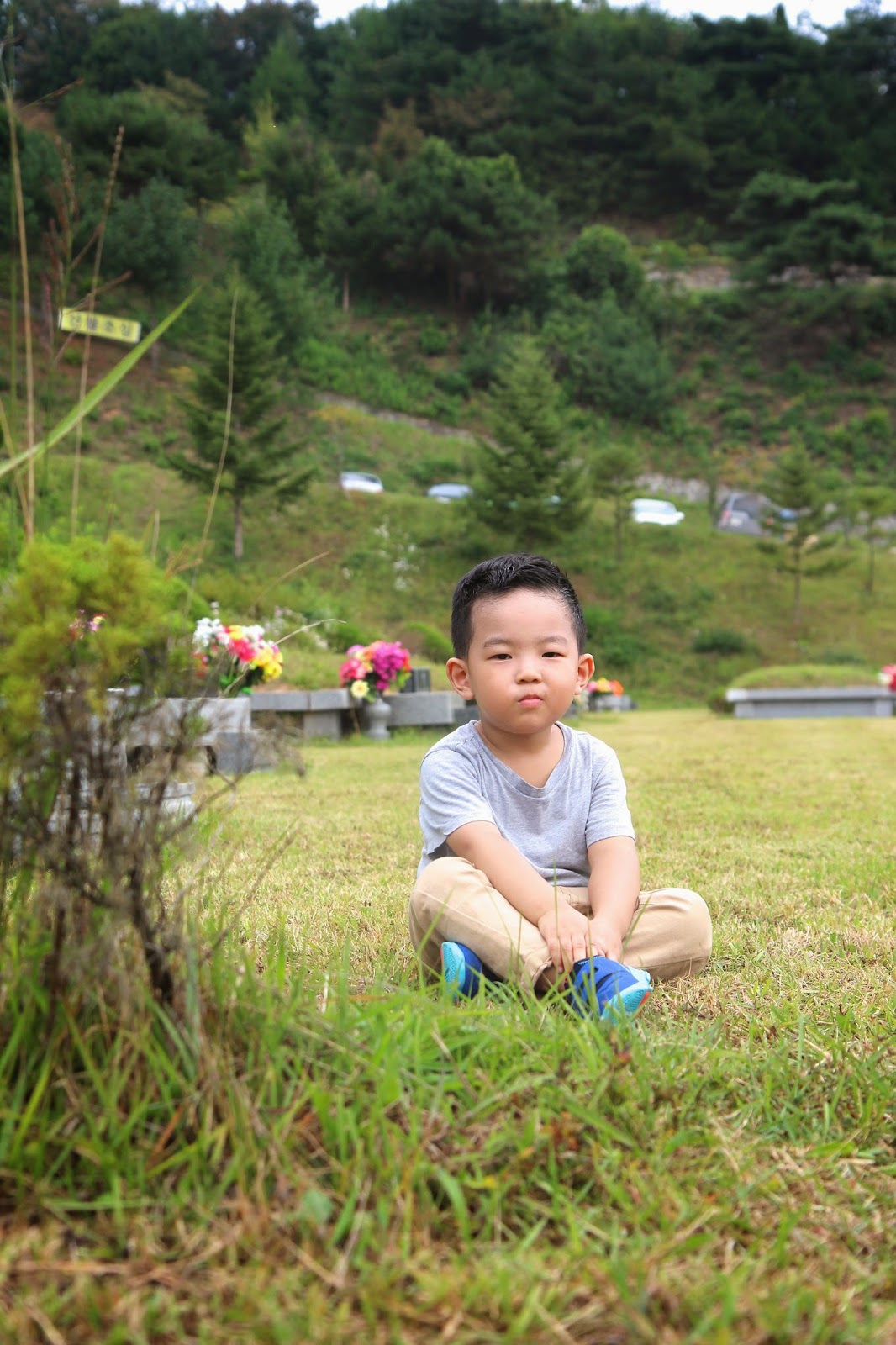 That's food in his mouth, which he refused to swallow or spit out. 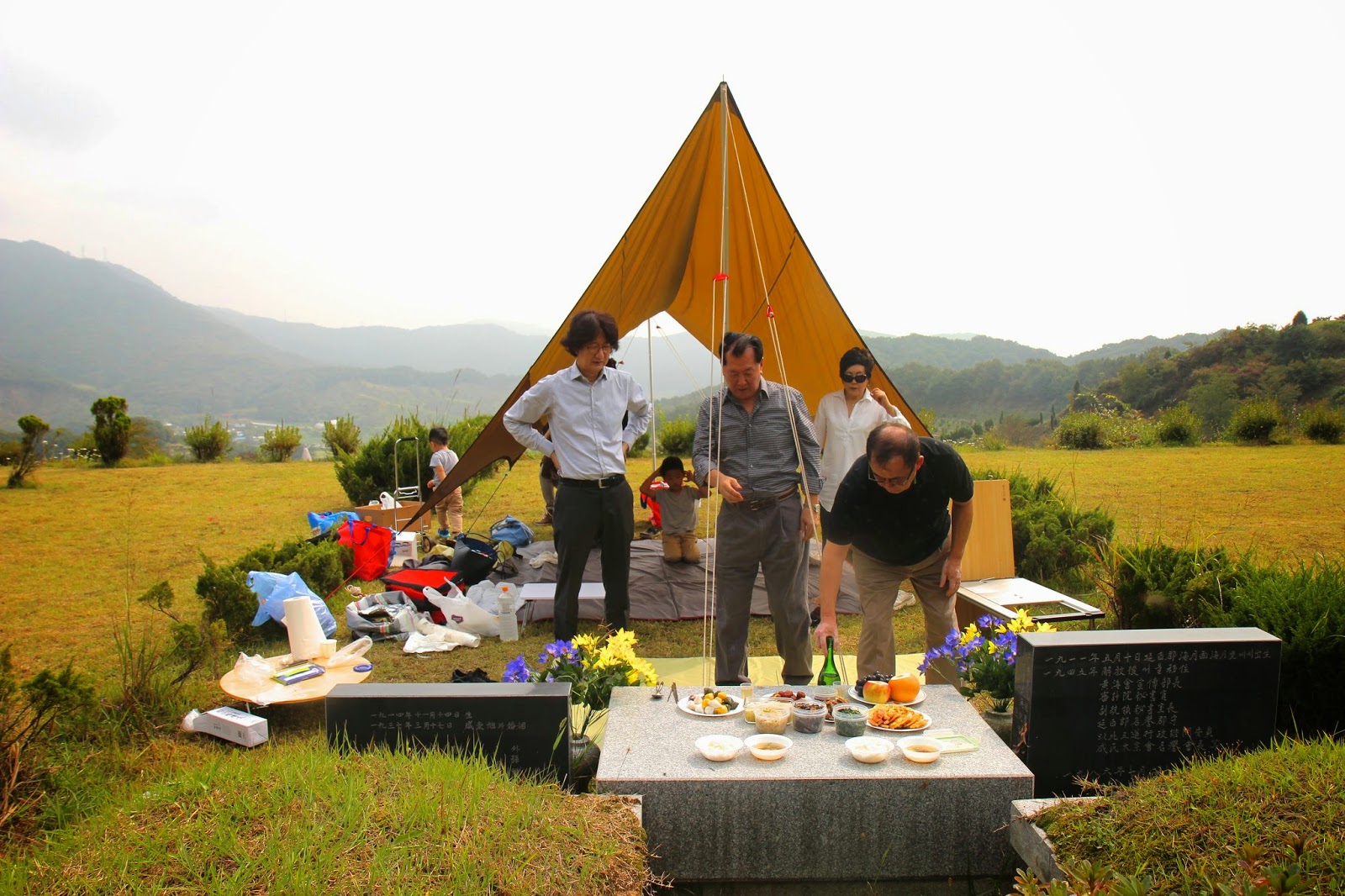 The ceremony and food are the same as that of the jesa (see generally 4.117 Jesa Spread). 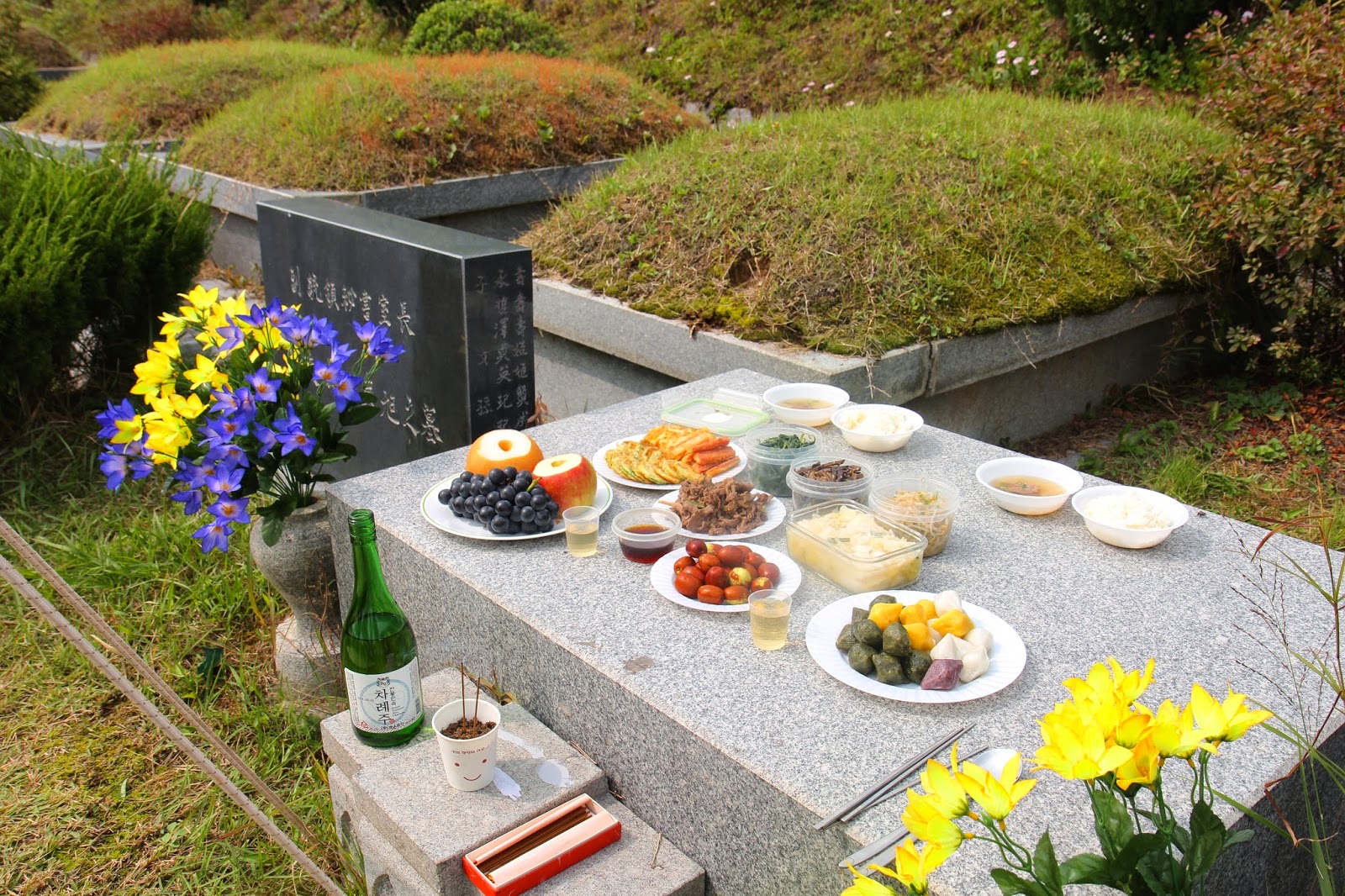 After laying out the spread on the offering table and inviting the spirits to nibble briefly... 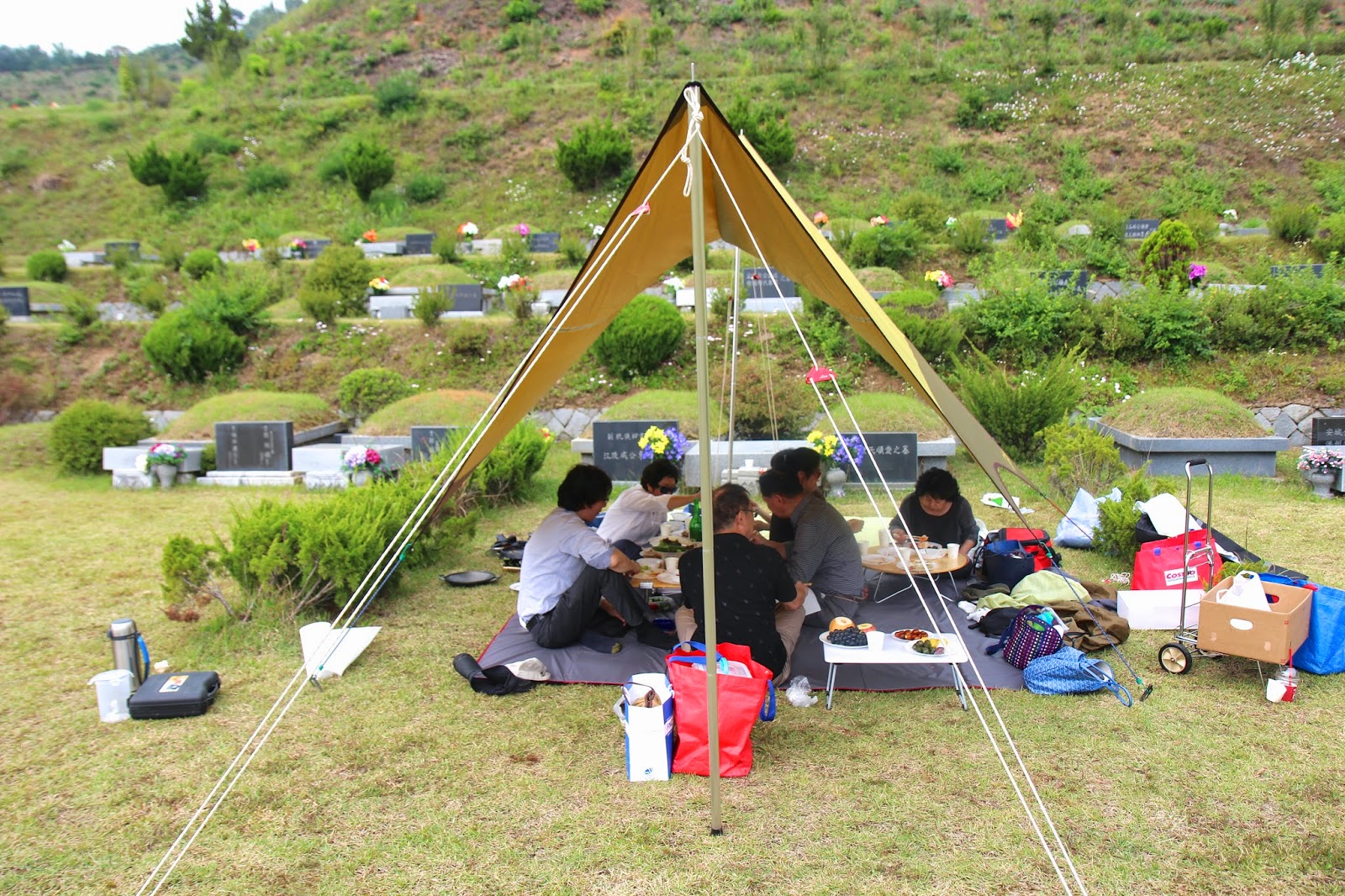 ...the food is brought in for the living to enjoy. 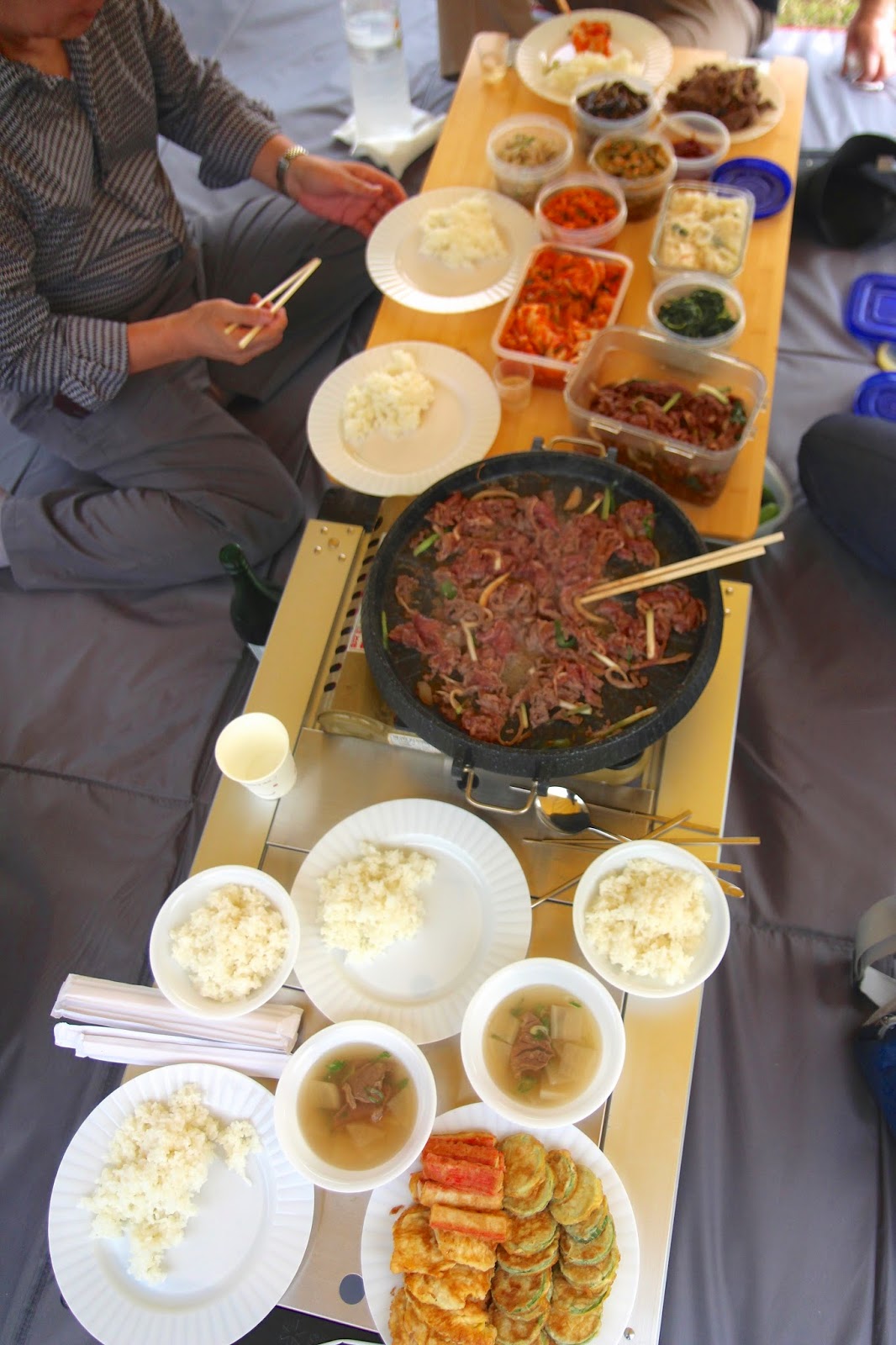 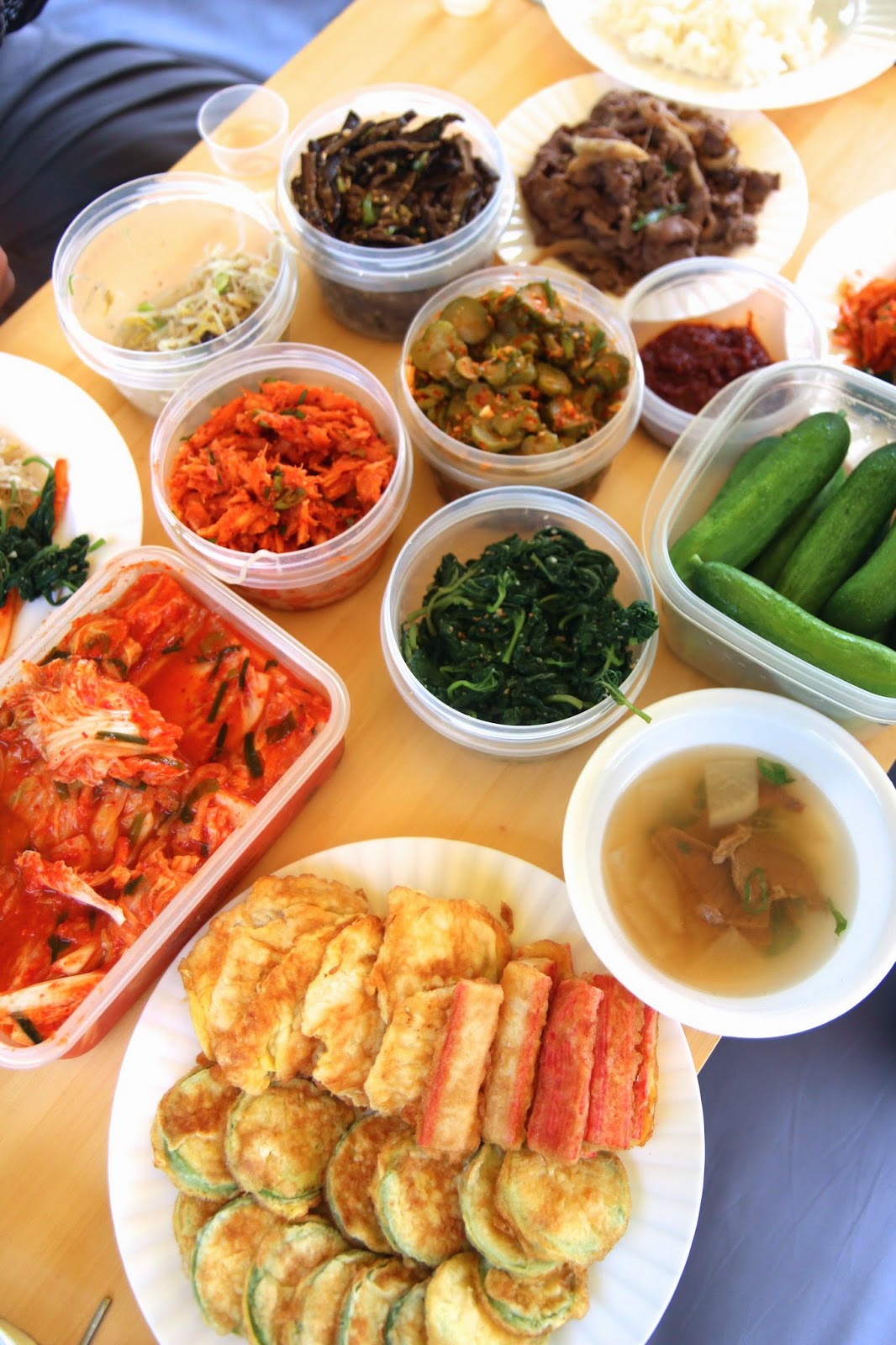 A traditional Korean spread of rice, bulgogi, jeon, kimchi, and other side dishes. 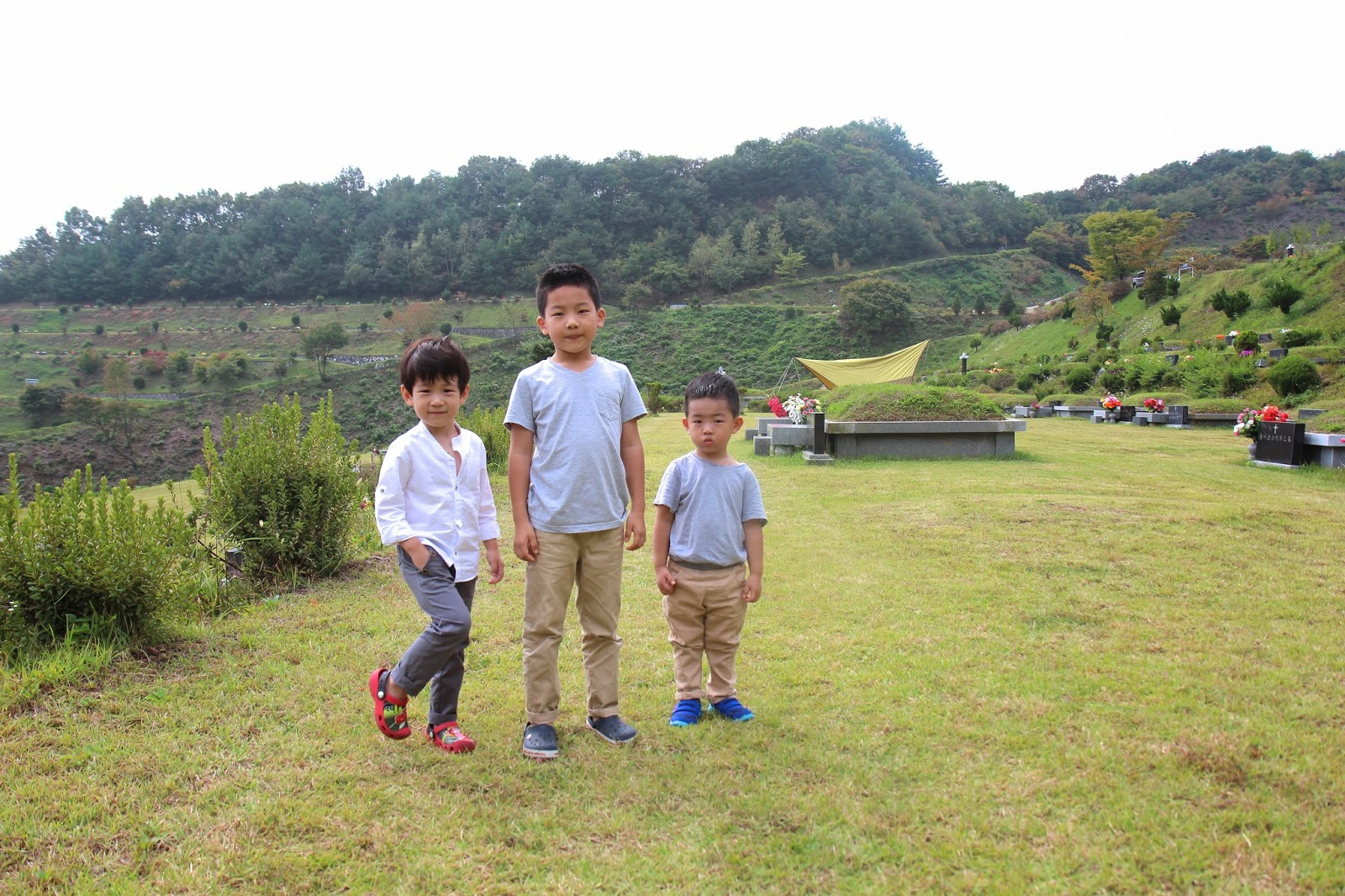 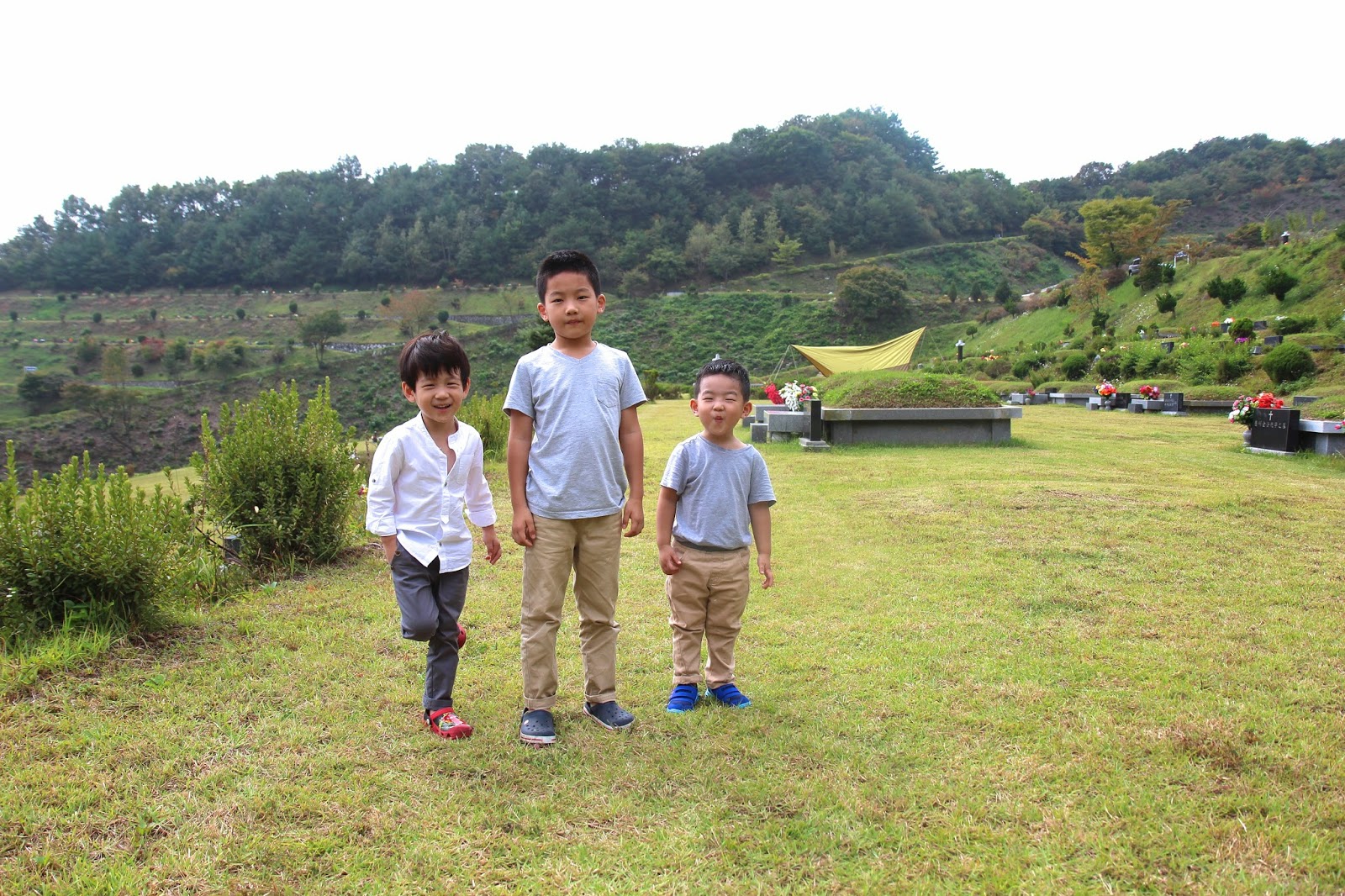 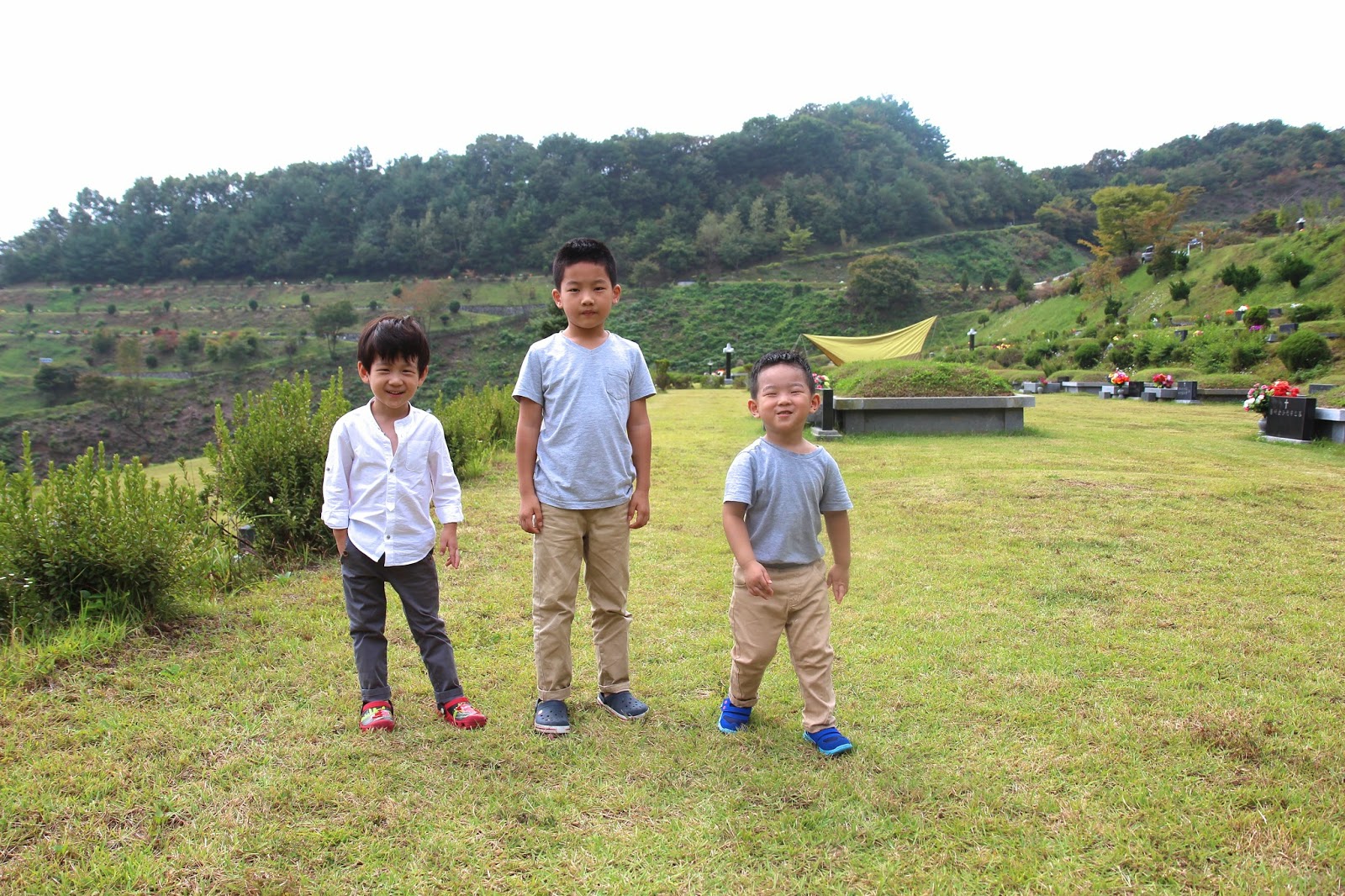 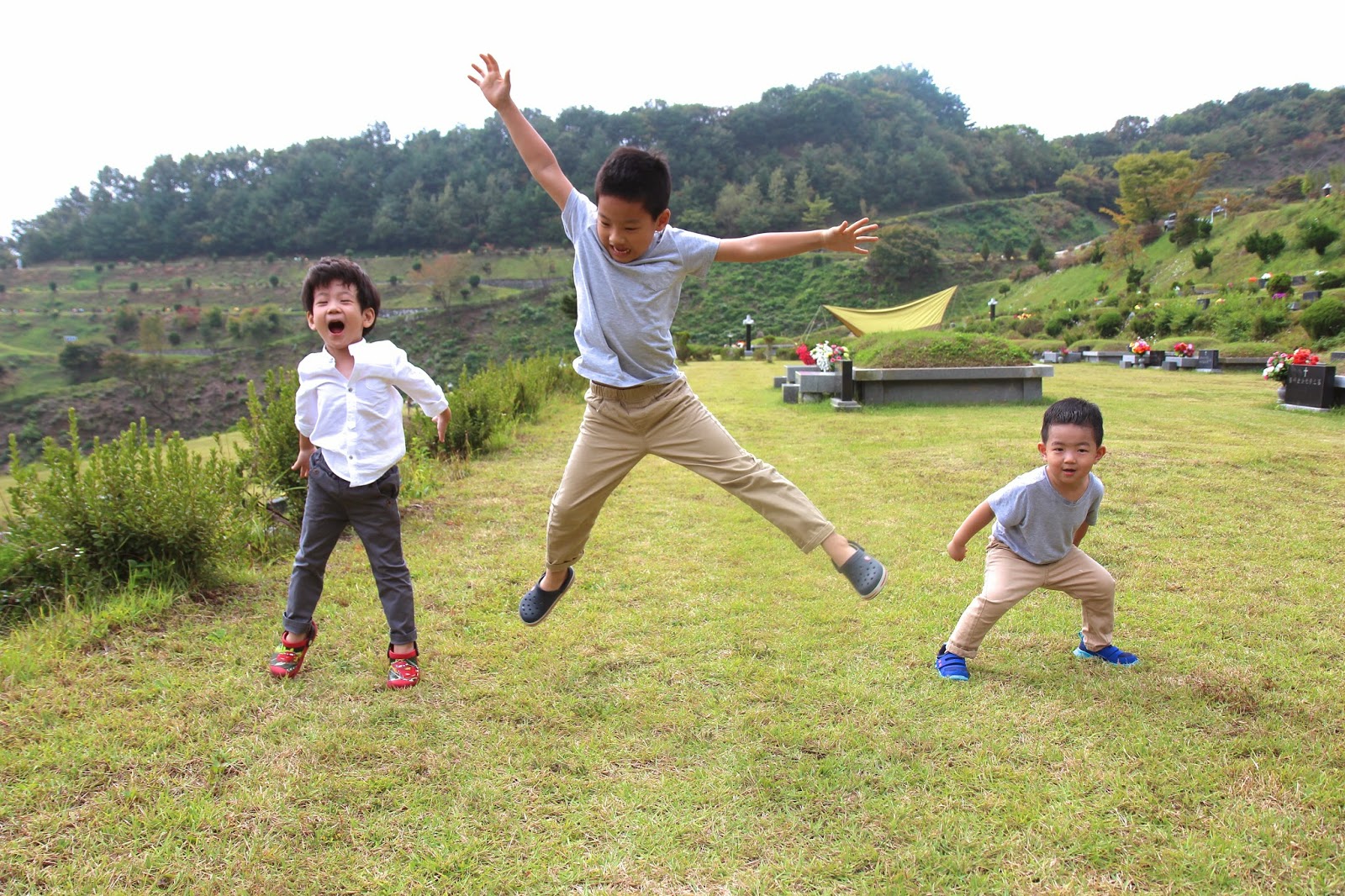 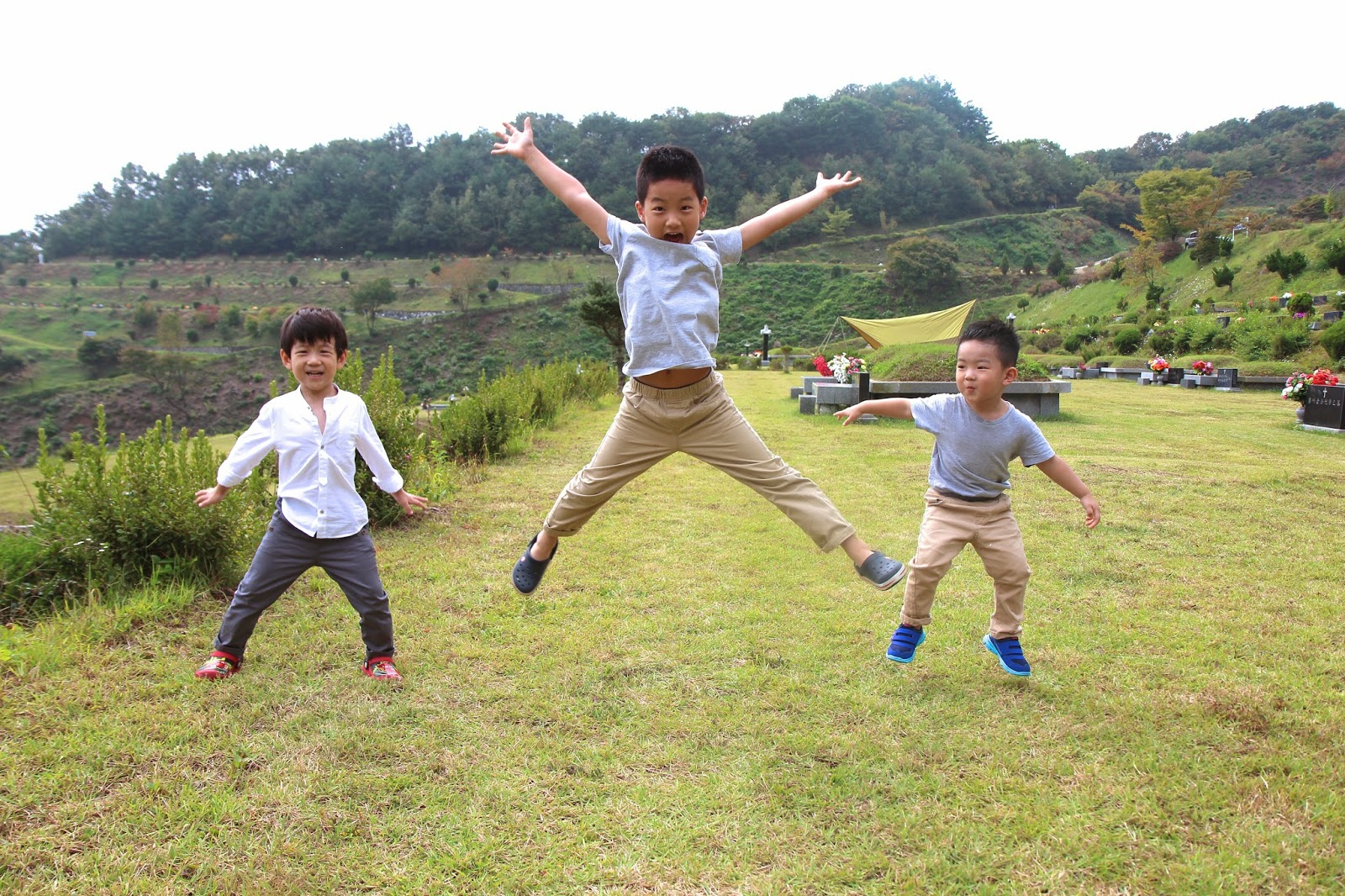 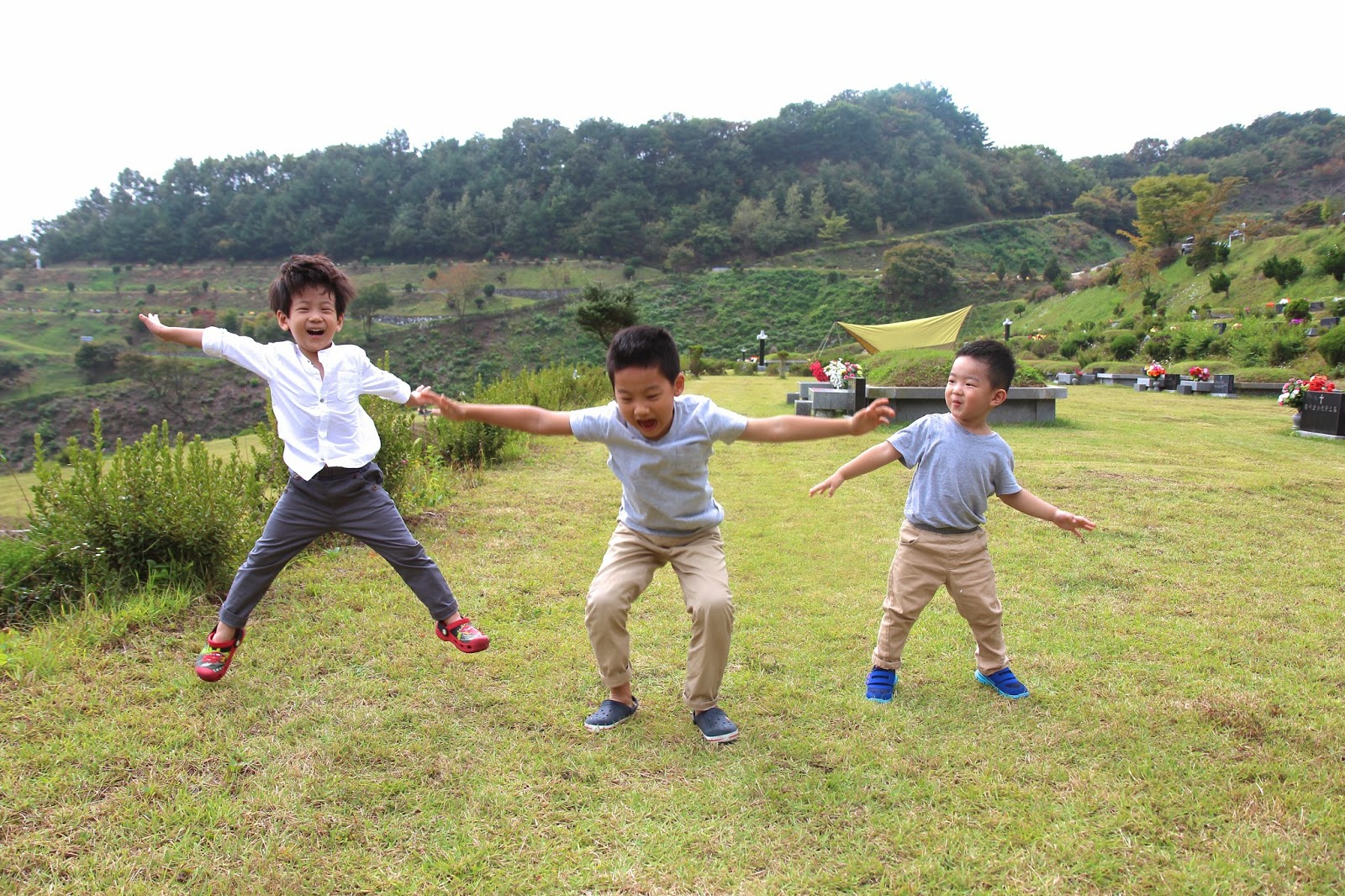 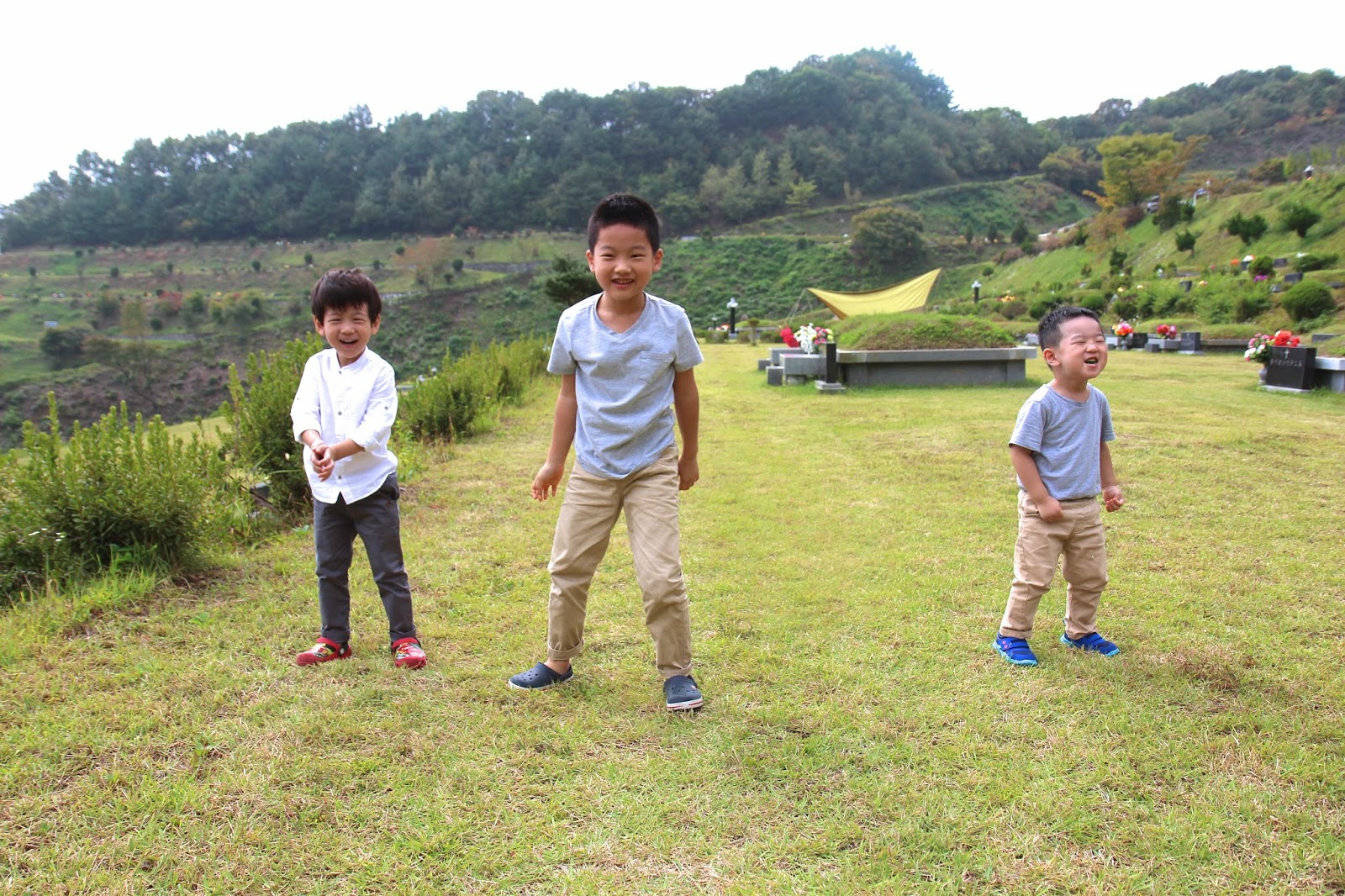