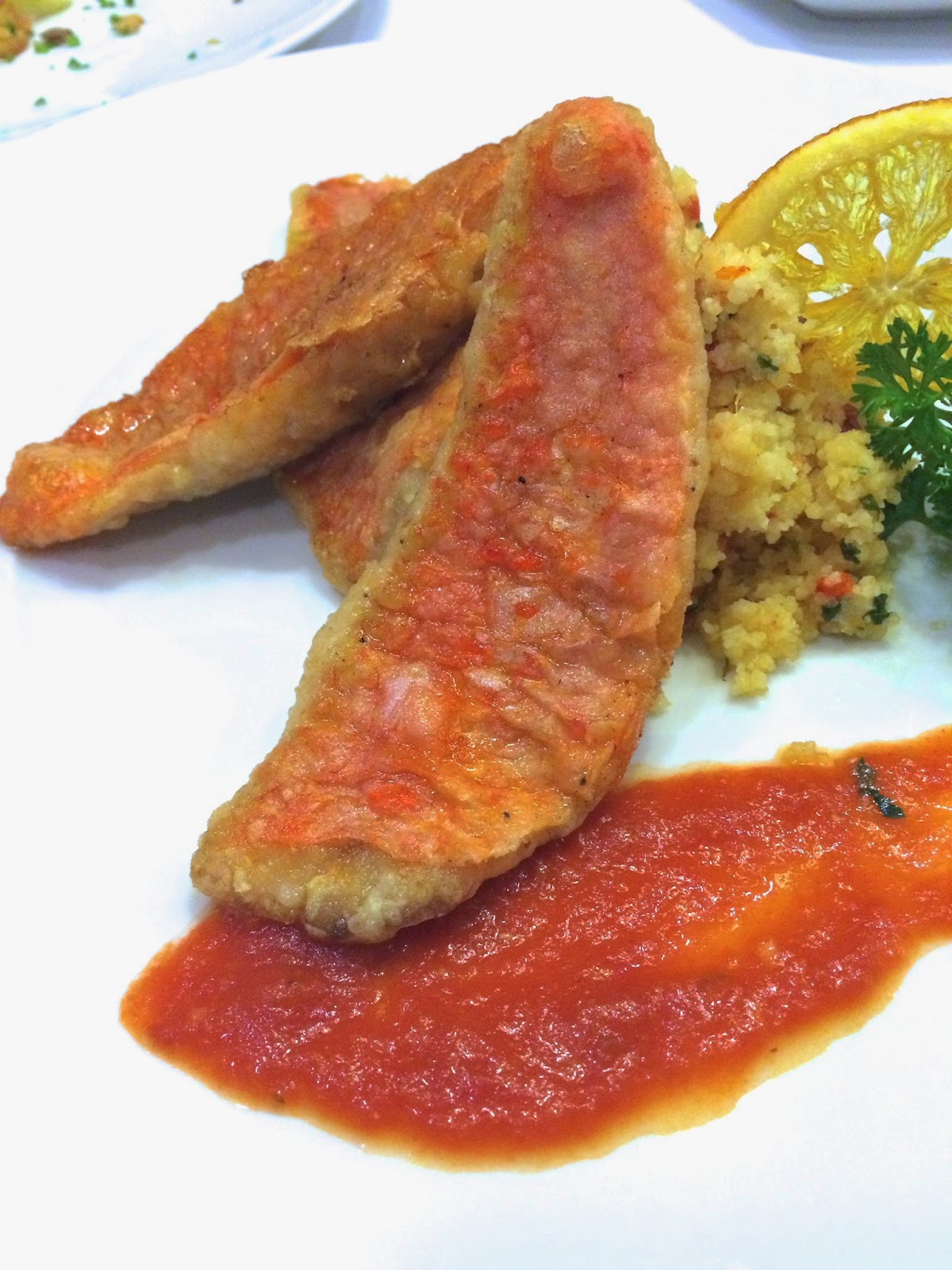 with Carmen and various WHO staff

The WHO Framework Convention on Tobacco Control (FCTC) is a global health treaty.  First of its kind.  Came into force in 2005.  Parties to the FCTC--currently 179 (of course, USA is not a Party)--are committed to reducing tobacco consumption and exposure to second hand smoke through a wide range of legal measures at the national level, such as tax increases, bans on marketing, smoke-free zones, health promotion campaigns, litigation, etc.

Every couple years, a Conference of the Parties (COP) meets to exchange evidence and discuss strategies for ways forward--the Oscars of tobacco control.  This time, the Sixth Session of the COP (COP6) is being held in Moscow, Russia.

I've been dispatched, along with Carmen, to attend COP6 as a member of the Secretariat and representative of the WHO Western Pacific Region.  Having started on Monday, the conference ends tomorrow. 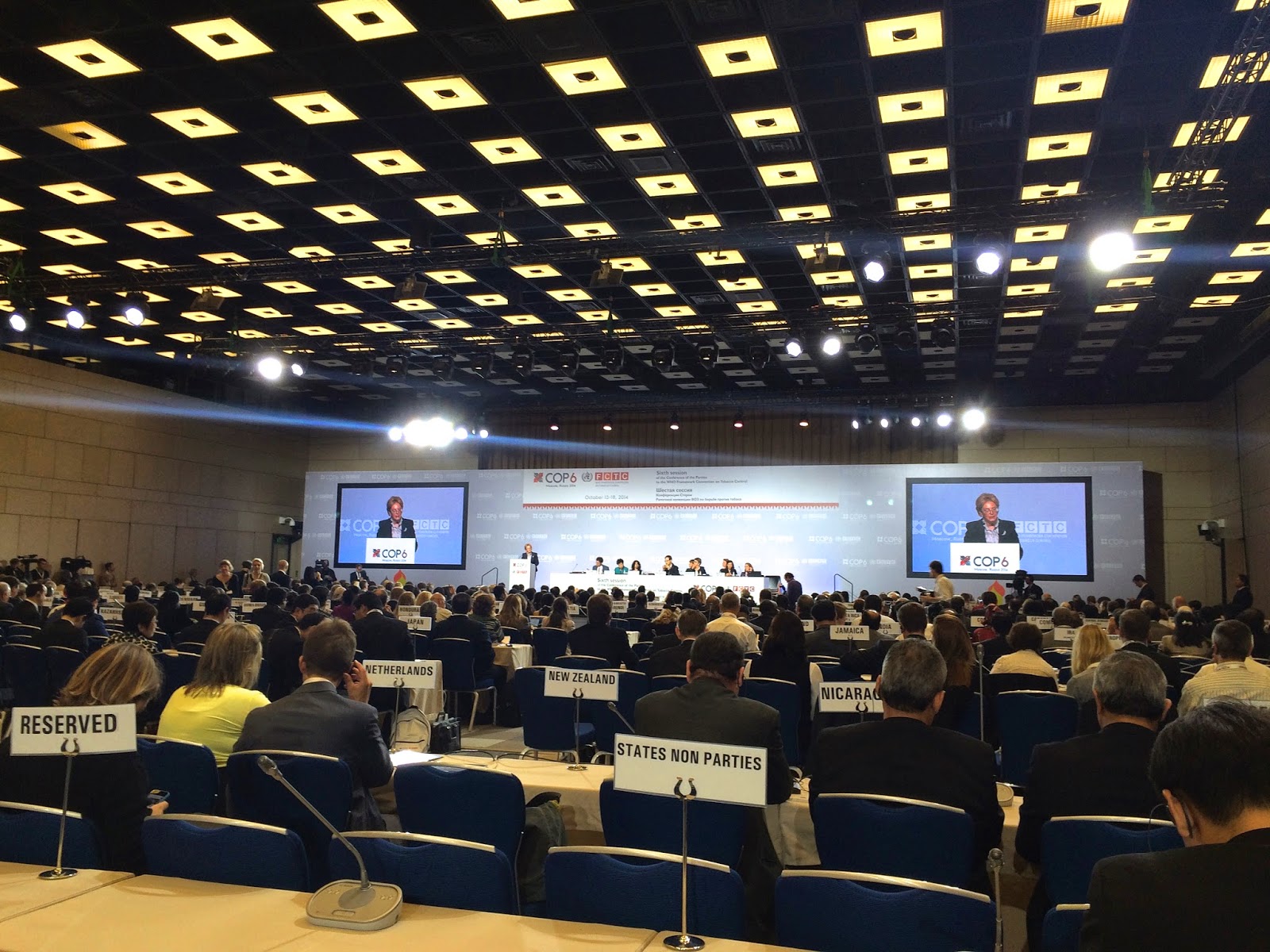 On Day 1, the Russian Federation's Minister of Healthcare Veronika Skvortsova delivered the keynote address on behalf of President Vladmir Putin (who'd bowed out at the last minute). 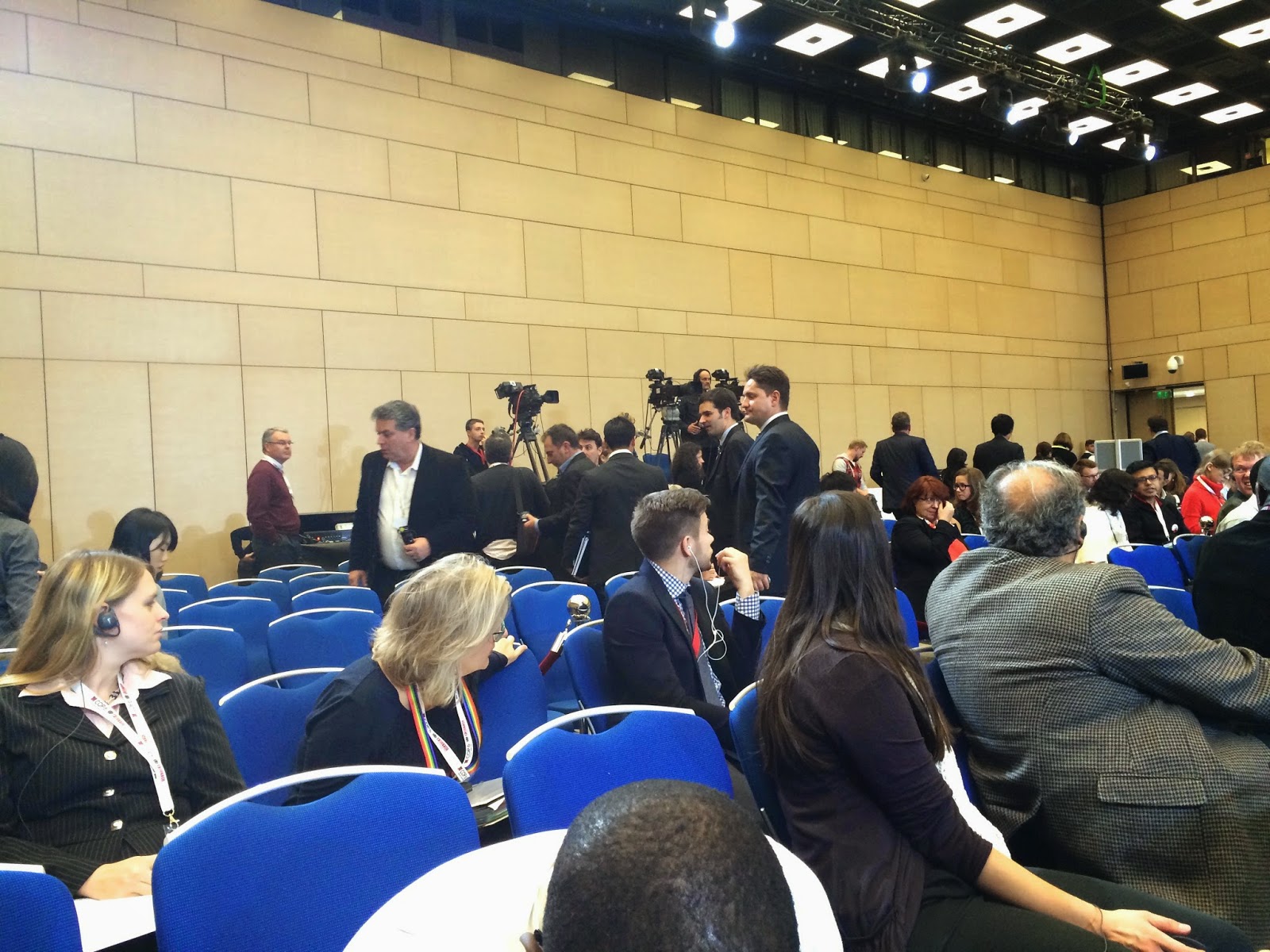 Following a unanimous vote to keep the proceedings closed, members of the public were escorted from the room; the move was criticized in some media reports as another example of WHO tyranny over health matters, lack of transparency, blah blah, yada yada--first, WHO had nothing to do with it, as all decisions at COP are made exclusively by the delegations, comprised of national governments, while WHO is on hand to provide technical/legal/administrative/logistical support; second, the objective of excluding the public was to get rid of representatives from the tobacco industry, who are present to take notes and report to their employers about the issues being discussed, so that they can devise interference strategies and put them into play even before the delegations return home; they do it anyway, by sneaking back into the room with stolen badges and filching documents and chatting with delegates during the coffee breaks while pretending to be media, but the official exclusion allows the Parties to speak in peace without all the grumbling/snickering from the back of the room.

RFR again (see most recently 5.280 Black Sturgeon Caviar with Mini Pancakes).  My grand plan for the evening had been to visit a nearby restaurant that spit-roasts a calf in the middle of the dining hall every Friday night, but some of others in the group were too tired to leave the hotel, and I didn't feel like pushing the agenda or going off on my own, so we all stayed in and went with the easy choice.

The food was mediocre. 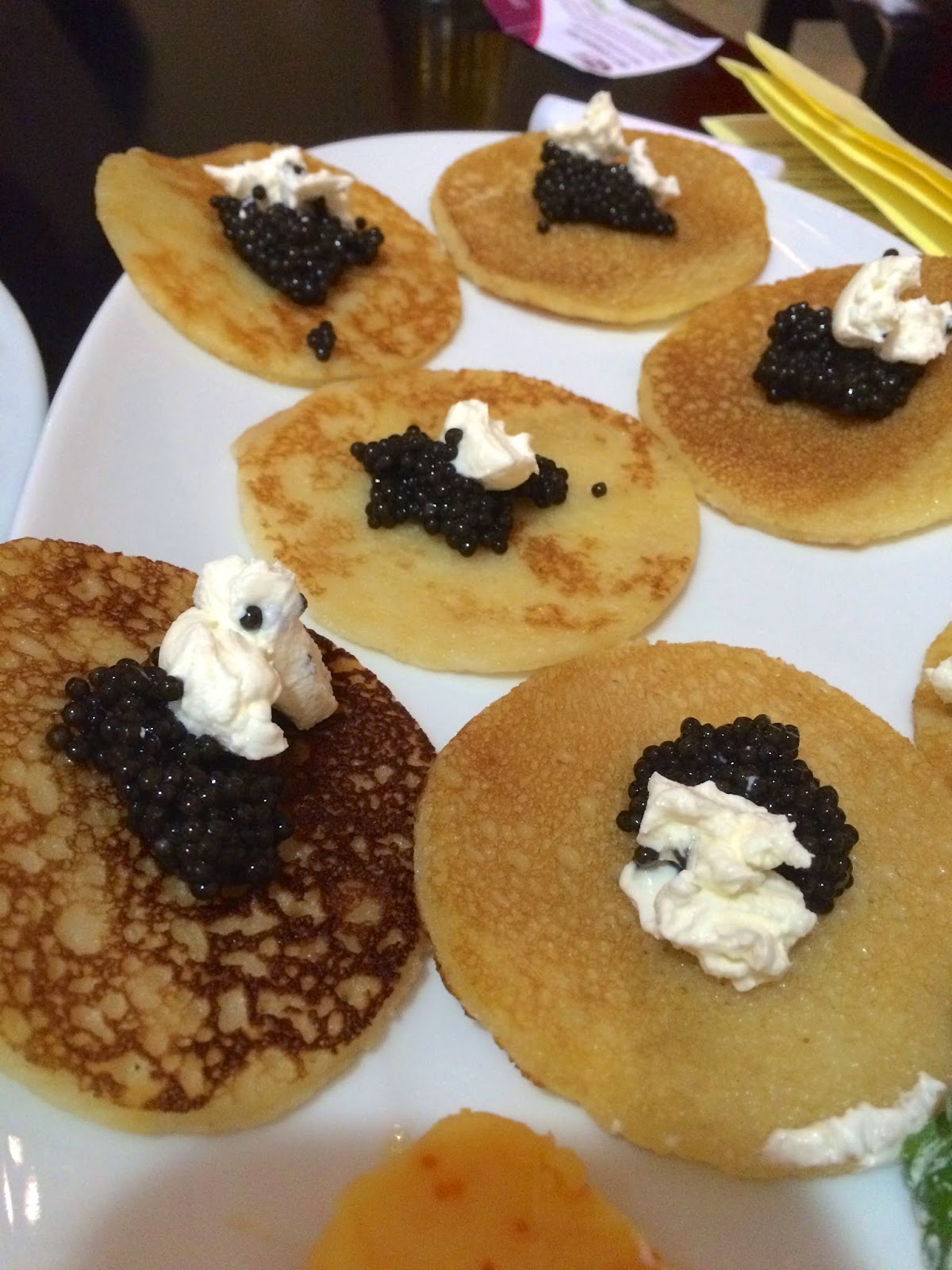 Black Sturgeon Caviar with Mini Pancakes (2.0)--this second tasting confirms that I don't really like caviar. 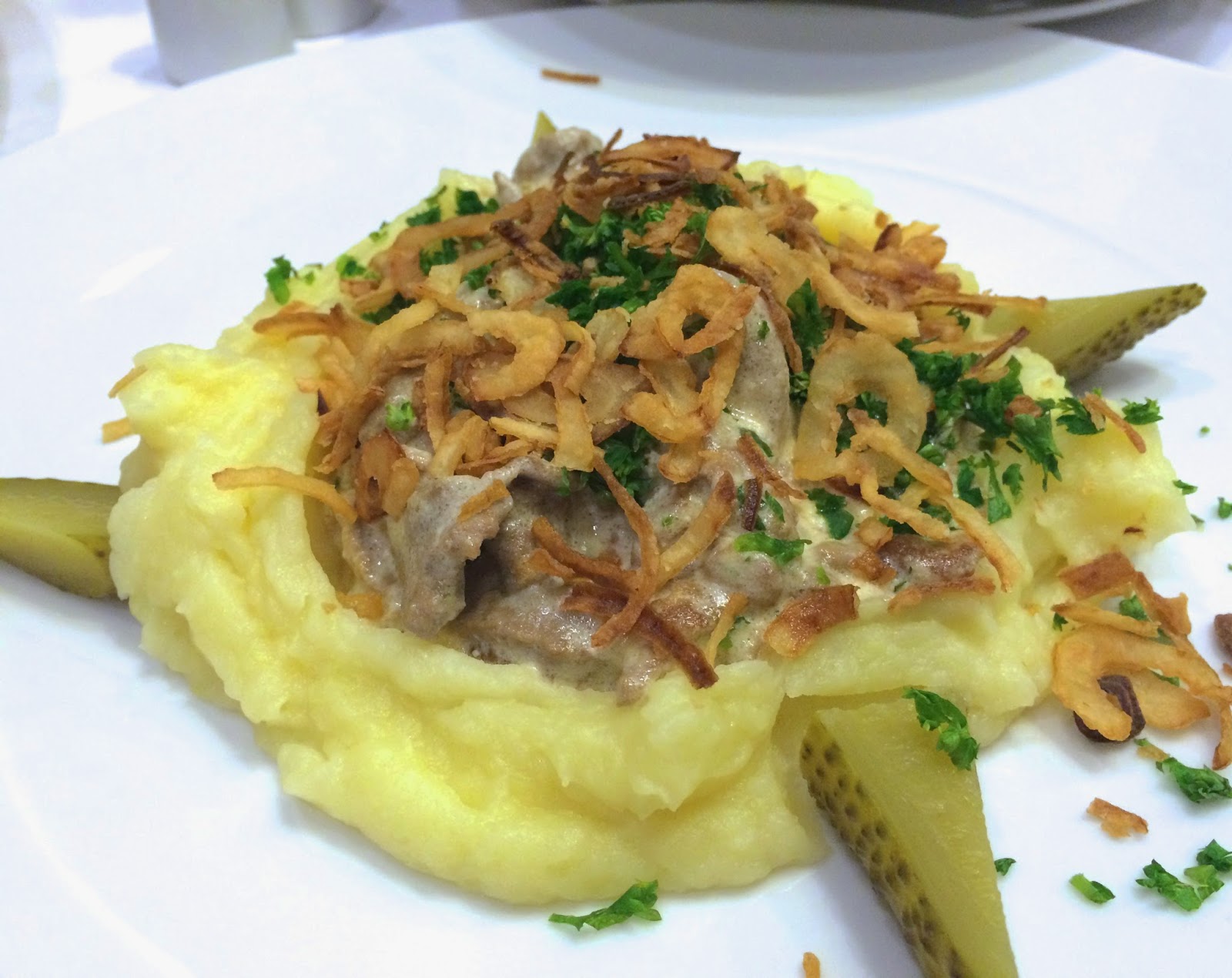 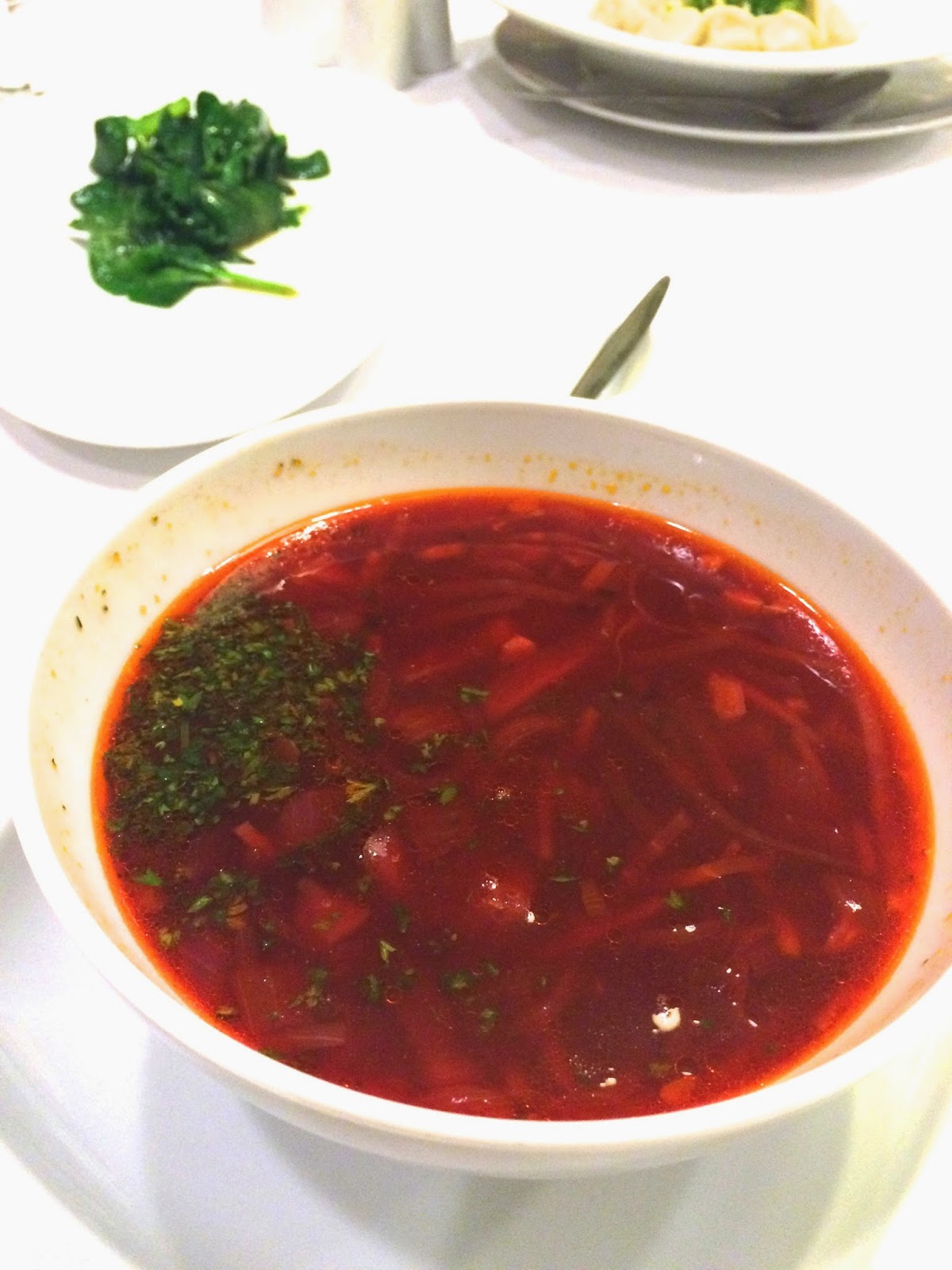 By week's end, I feel that I've managed to get a pretty good grasp of USSR cuisine, at least on a rudimentary level.  Partly from dinner, where I had sturgeon caviar twice, borshch/borsch twice, and beef stroganov/stroganoff thrice, but mostly from the daily lunch buffets during the conference, the general themes would seem to be potatoes and pancakes, dumplings and pies, pickled seafoods and breaded cutlets, sour cream and mayonnaise--simple yet hearty.  Good stuff.