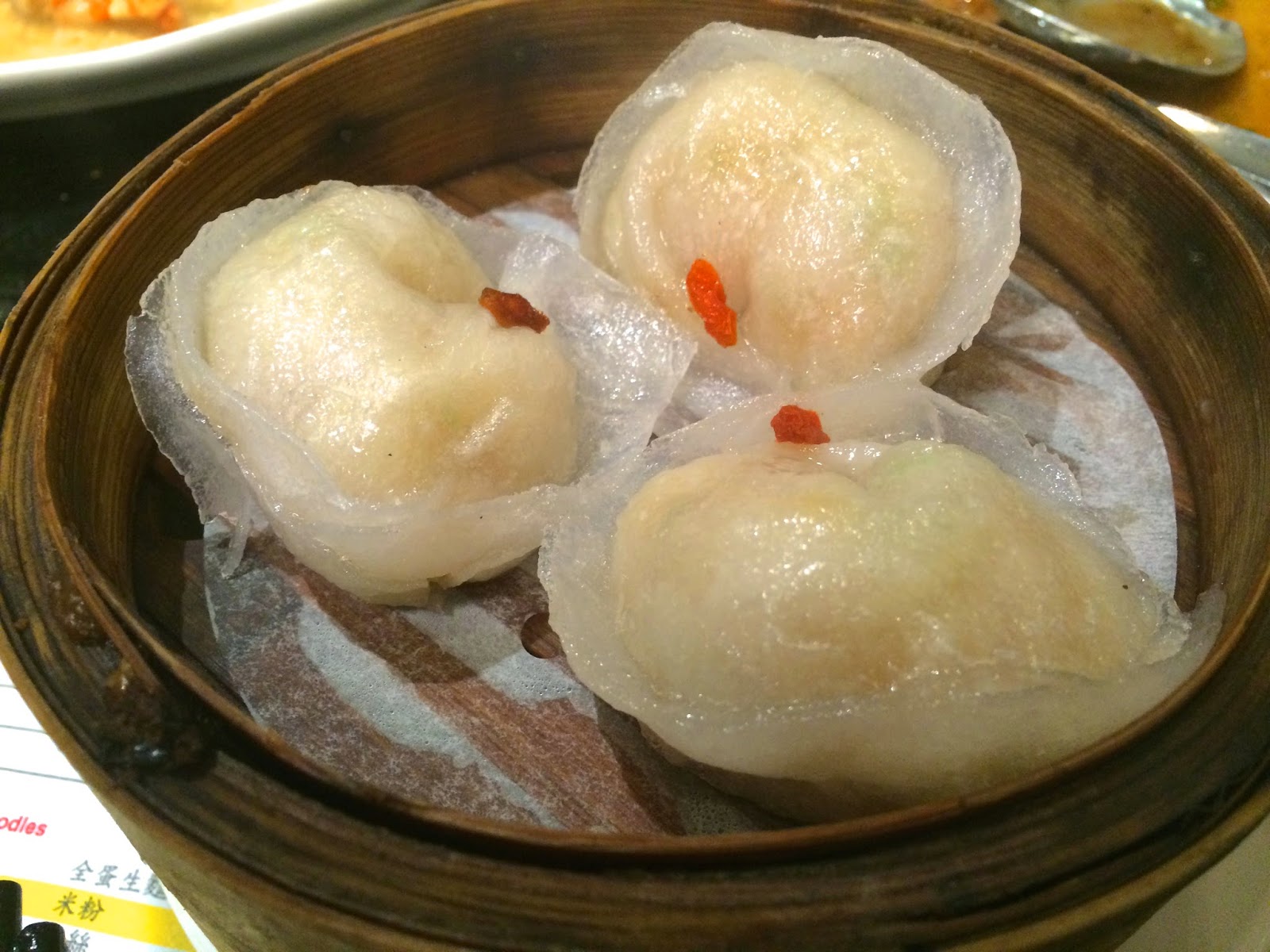 
TEITY.  Try Every Item at Tao Yuan* (see previously 5.309 Steamed Fish Fillet Stuffed with Mashed Shrimp).  Attempting to eat my way through the restaurant, all 222 items (excluding shark's fin and desserts).  From what I've seen so far, it would seem to be one of the best in the neighborhood, solid on all counts: taste, quality, variety, service, vibe, proximity, maybe price.  Once I've tried everything, I'll know exactly what to get, depending on the circumstances, whether it's for a quick bite on my own, a casual night out with friends/colleagues/family, or a formal occasion hosting bosses/VIPs.  That kind of certainty, in the unpredictable culinary landscape of Manila, will be invaluable. 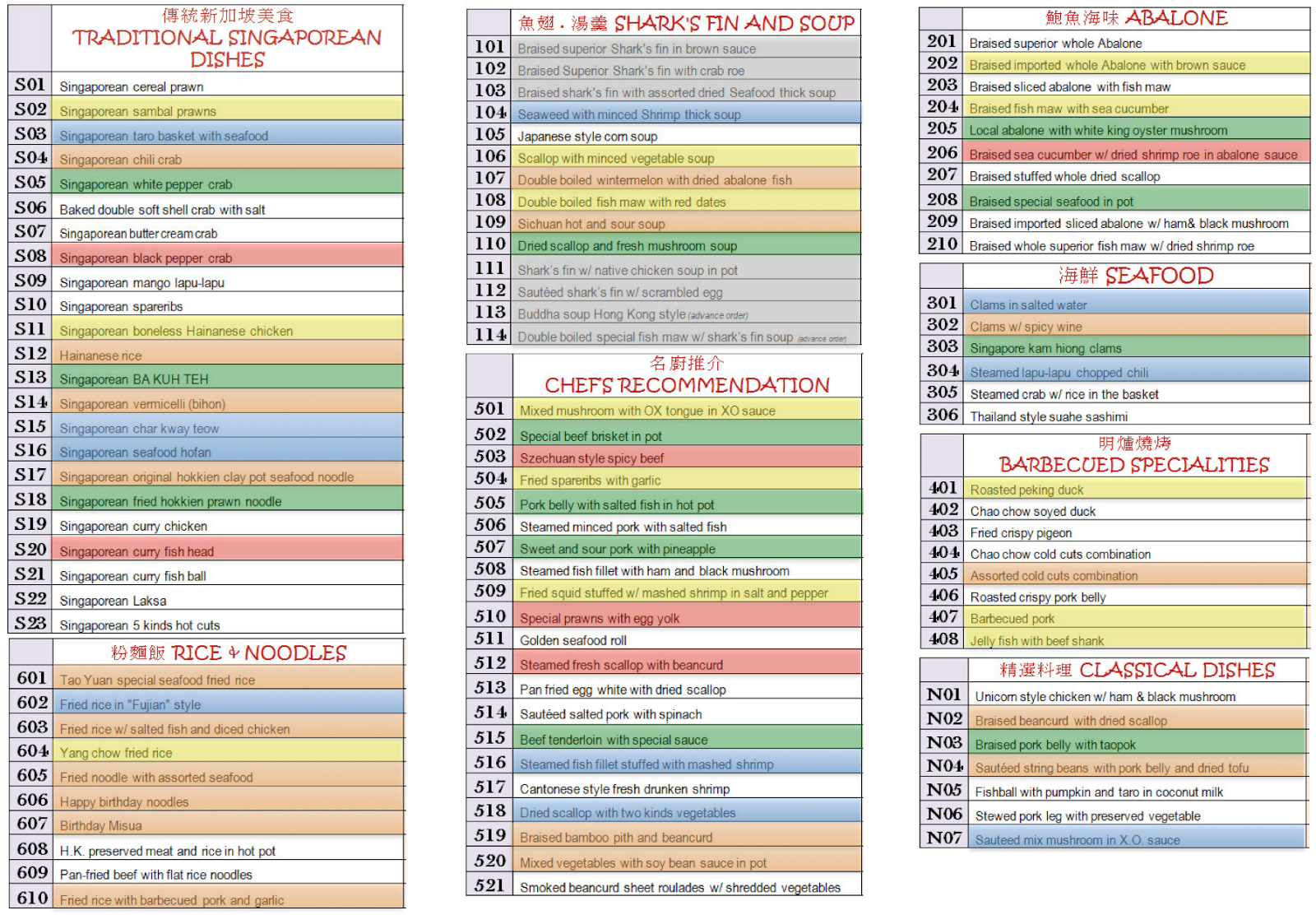 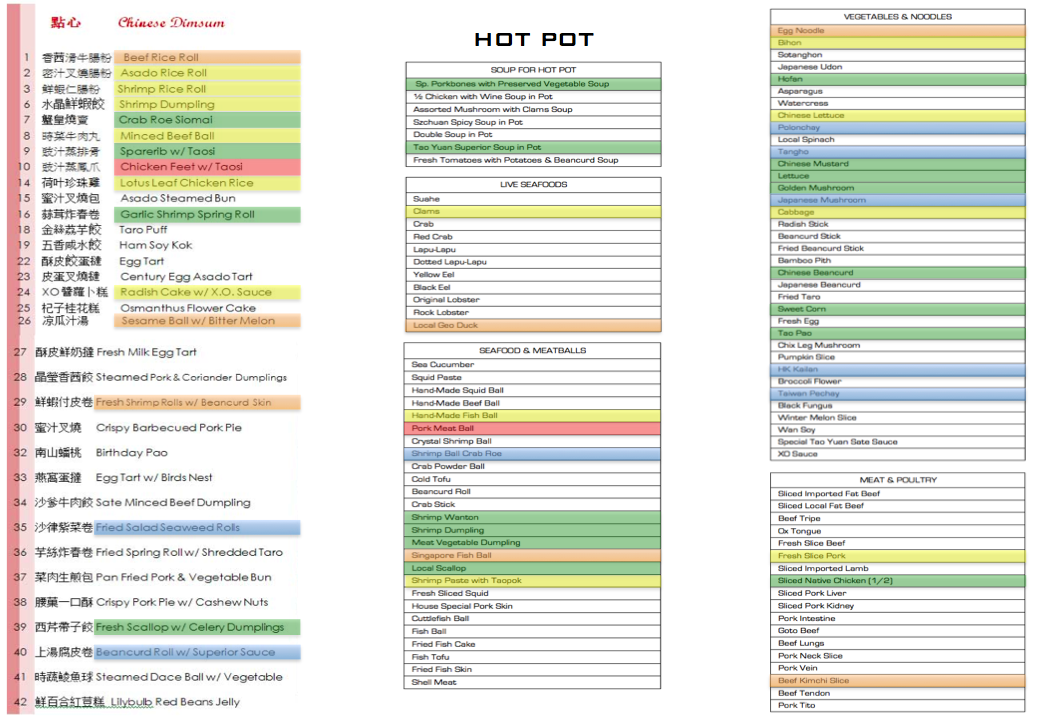 HS and KH are in town!  Just to hang out over the weekend.  My first visitors since I've relocated here ten months ago (not counting wife, kids, father).

For their inaugural dinner, I took them to Tao Yuan. 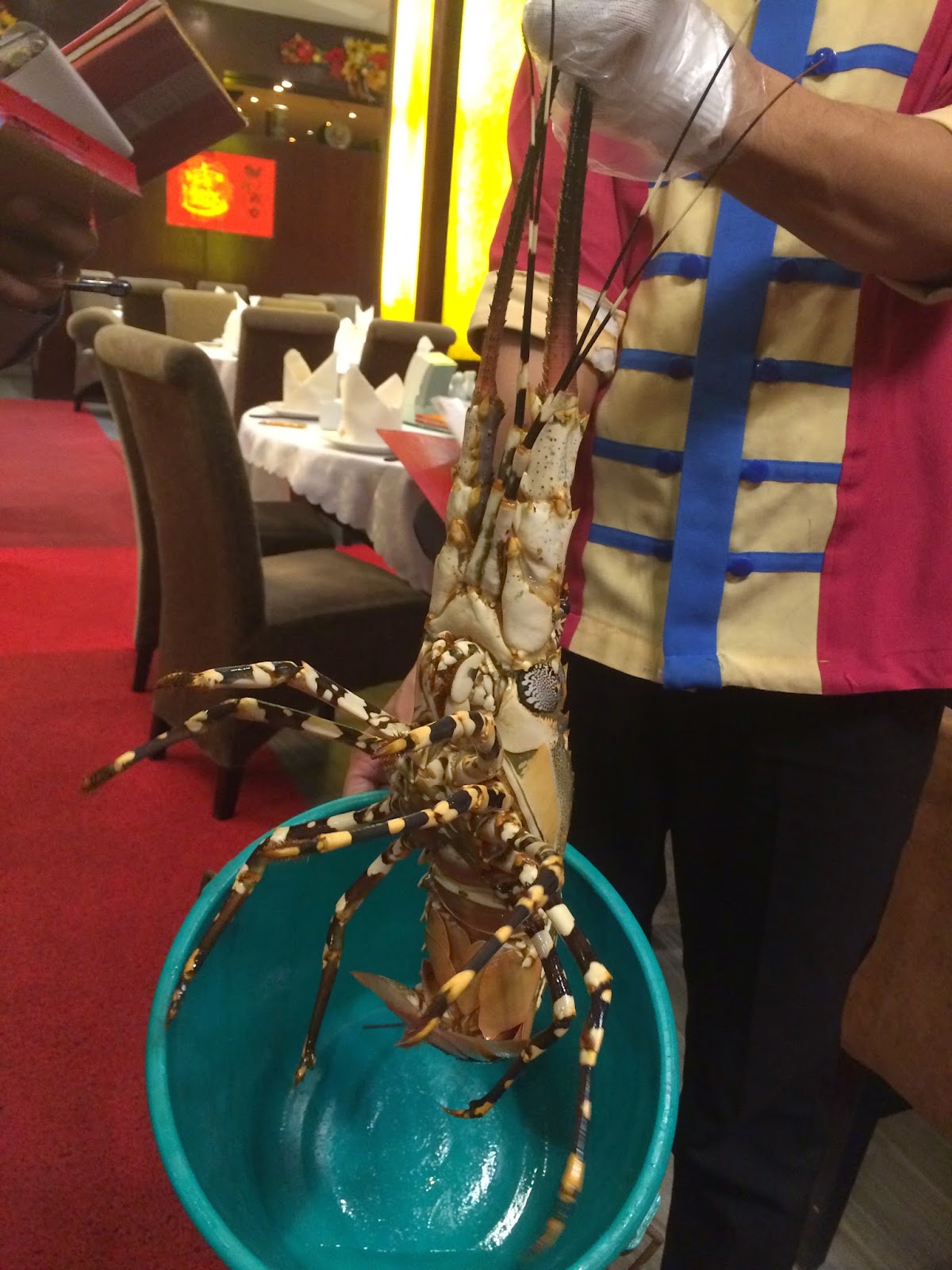 Not so much a lobster in the western sense, the kind with pincers, here more of a gigantic shrimp.

To ensure a good meal, I went mostly with previously tried items, blue highlights: Clams in Salted Water,** Sauteed Mix Mushrooms in XO Sauce and Seafood Hofan (see generally 5.252 Seafood Hofan).  Though the spread didn't advance TEITY in the immediate sense, it did provide an opportunity to retry certain dishes to confirm that they would be appropriate choices when I organize a dinner party here for the Korean WPRO staff.  In any event, they seemed to enjoy the food. 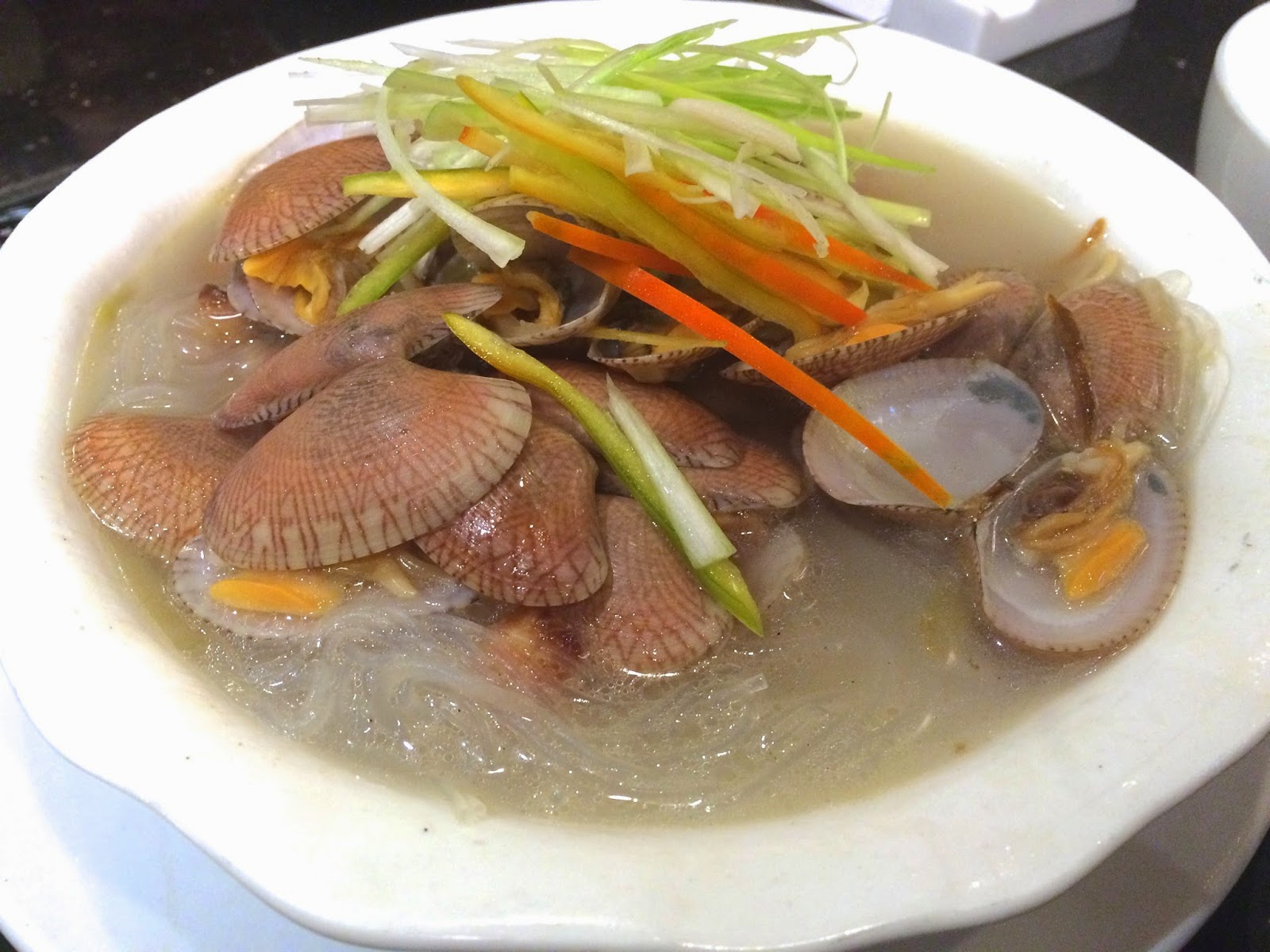 **Clams in Salted Water (2.25)--turns out that the clam soup that I'd previously been served under this name is an off-menu item, served by mistake (see generally 5.279 Assorted Hot Mezzah...); the mistake was much better than this, the actual dish. 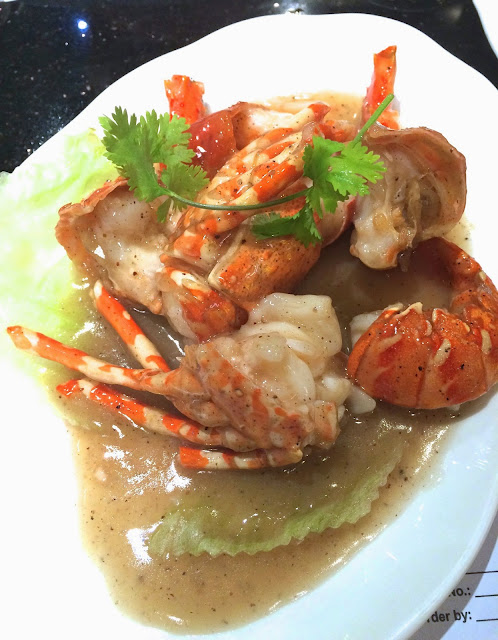 White Pepper Lobster (3.5)--I also experimented by custom-ordering a lobster in the white pepper (crab) sauce*** (see generally 5.302 White Pepper Crab); better than the crab, but still a pain to eat; will experiment with prawns next time.

***TL informs me that, for no apparent reason, Singaporeans never do the white pepper sauce with anything other than crab, even though the sauce would seem perfectly amenable to application on other shellfish.  I suppose that it's like how Koreans use the classic soy-sesame galbi/bulgogi marinade only on beef and pork, never chicken, seafood, or vegetables.