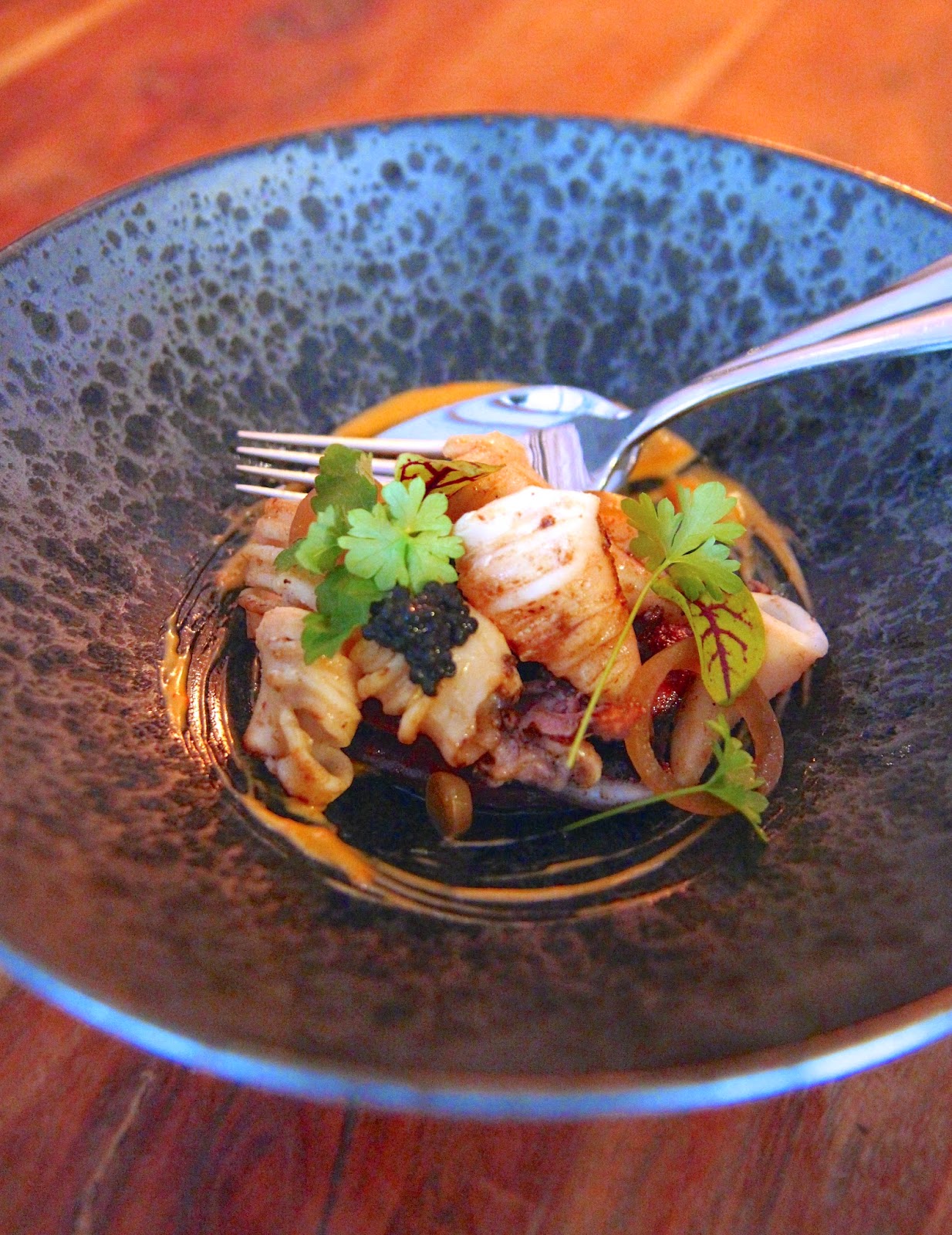 St Kilda is a municipality of Melbourne.  Located on the southeastern coast, includes a harbour, marina, beach.  The neighborhood is also a hotspot for hipster bars and restaurants, particularly along Fitzroy Street, from St Kilda Station down towards the beach. 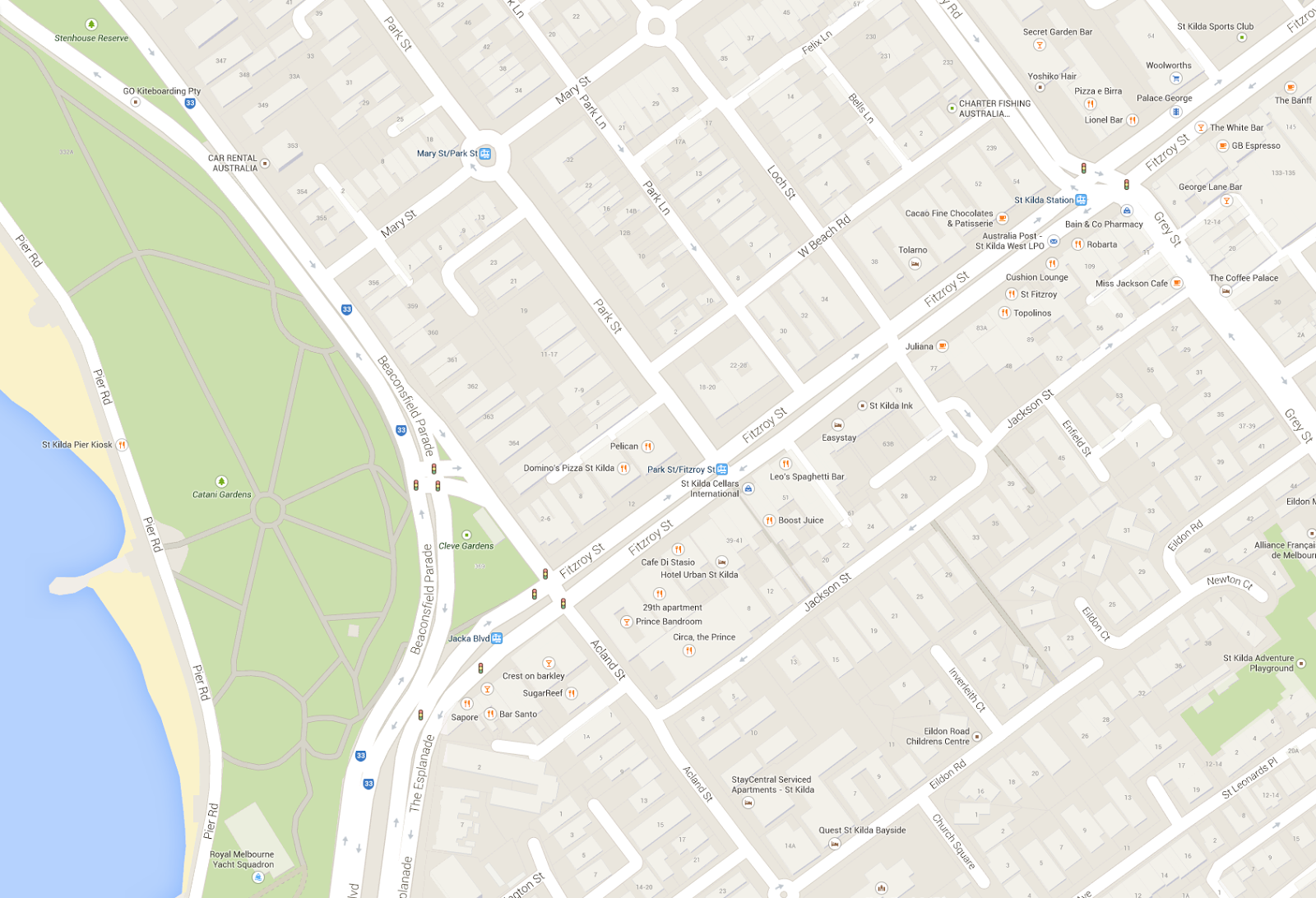 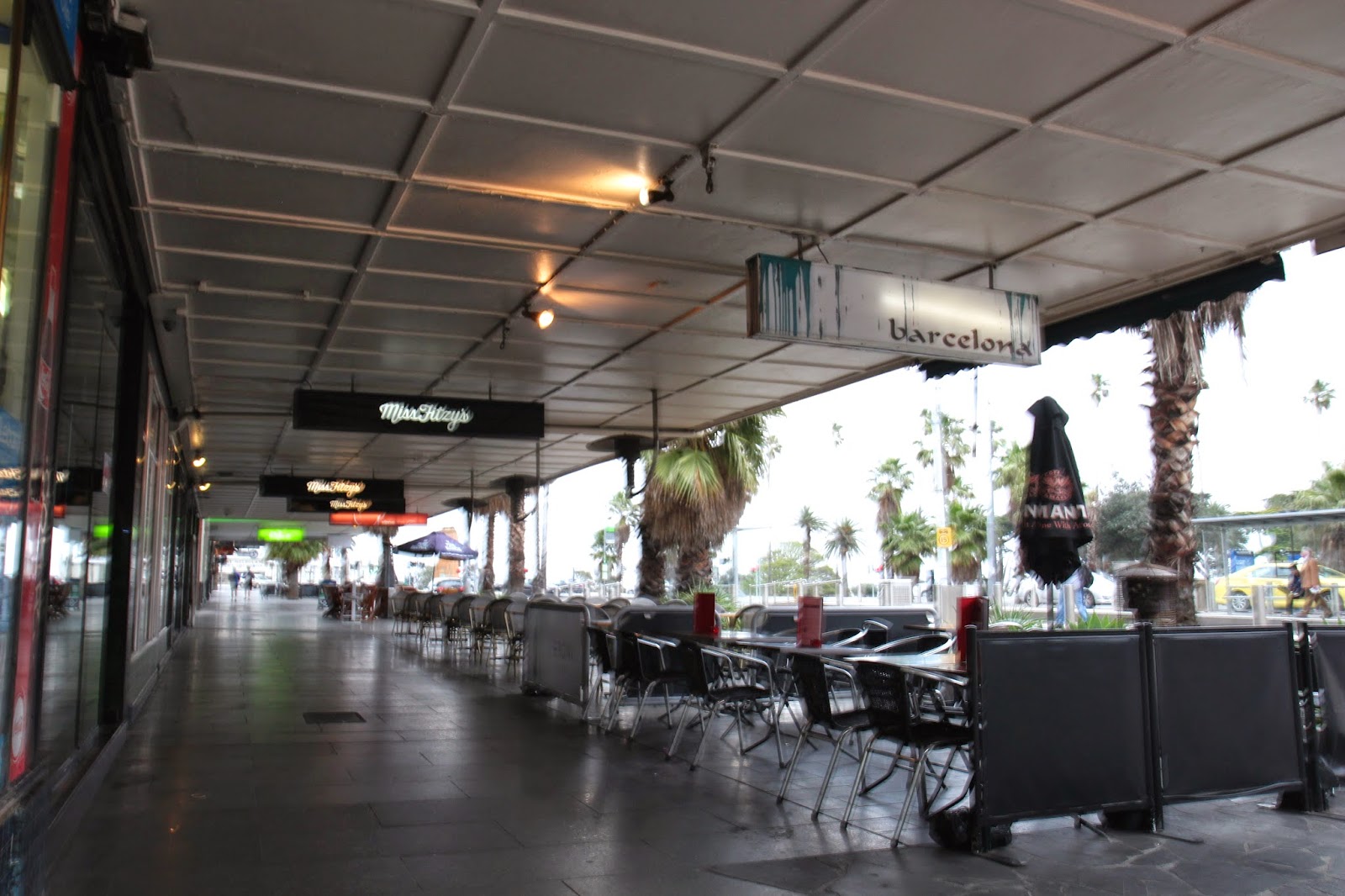 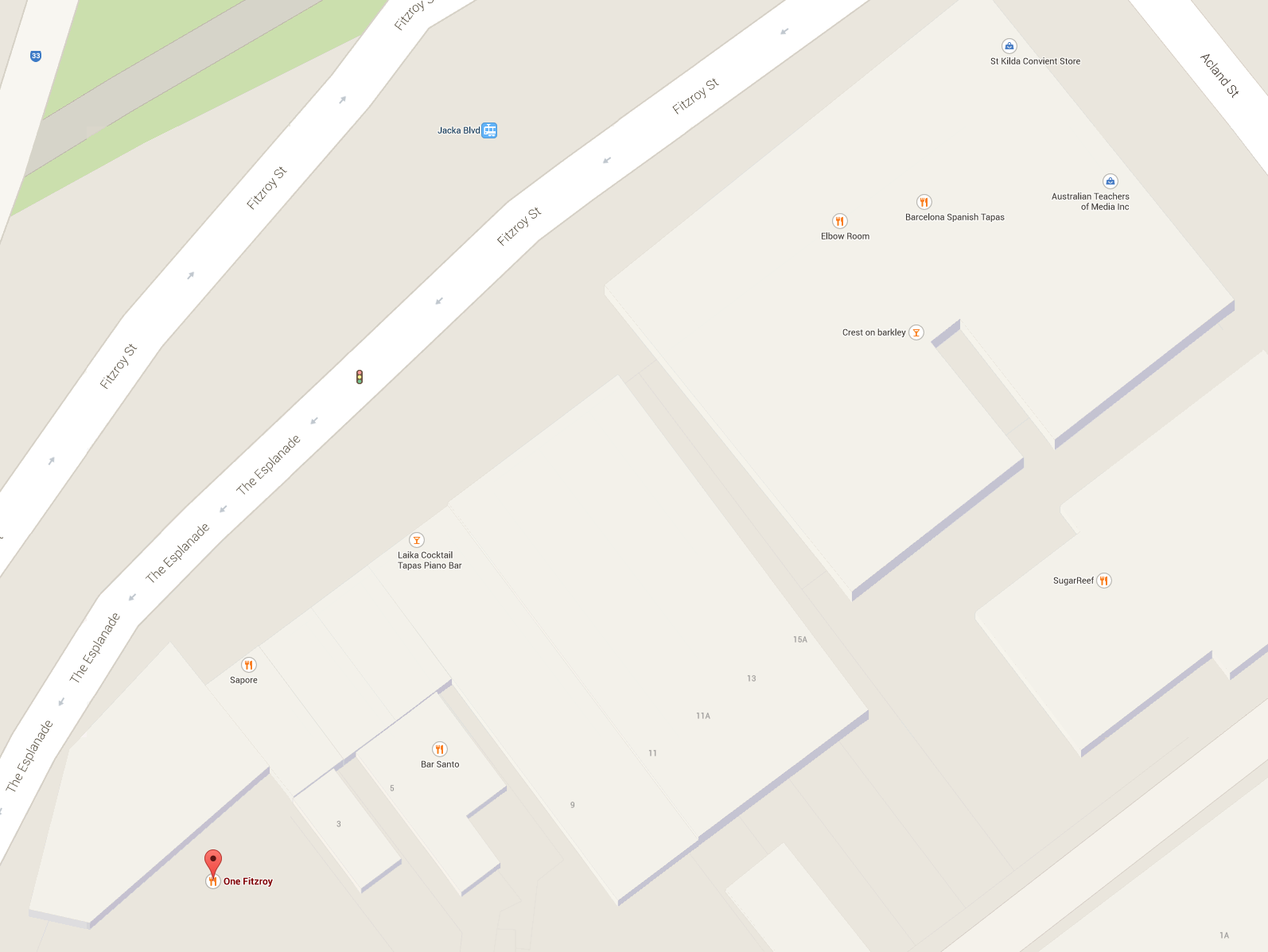 Going back and forth between a strip of bar/restaurants lined up along the corner where The Esplanade turns into Fitzroy Street, perusing menus, unable to choose among so many enticing options, I decided to make things easy on myself and try them all.  One item from each establishment, one after the other, six total--a multi-course, multi-venue meal.  Plus noteworthy/proprietary beverages, if any. 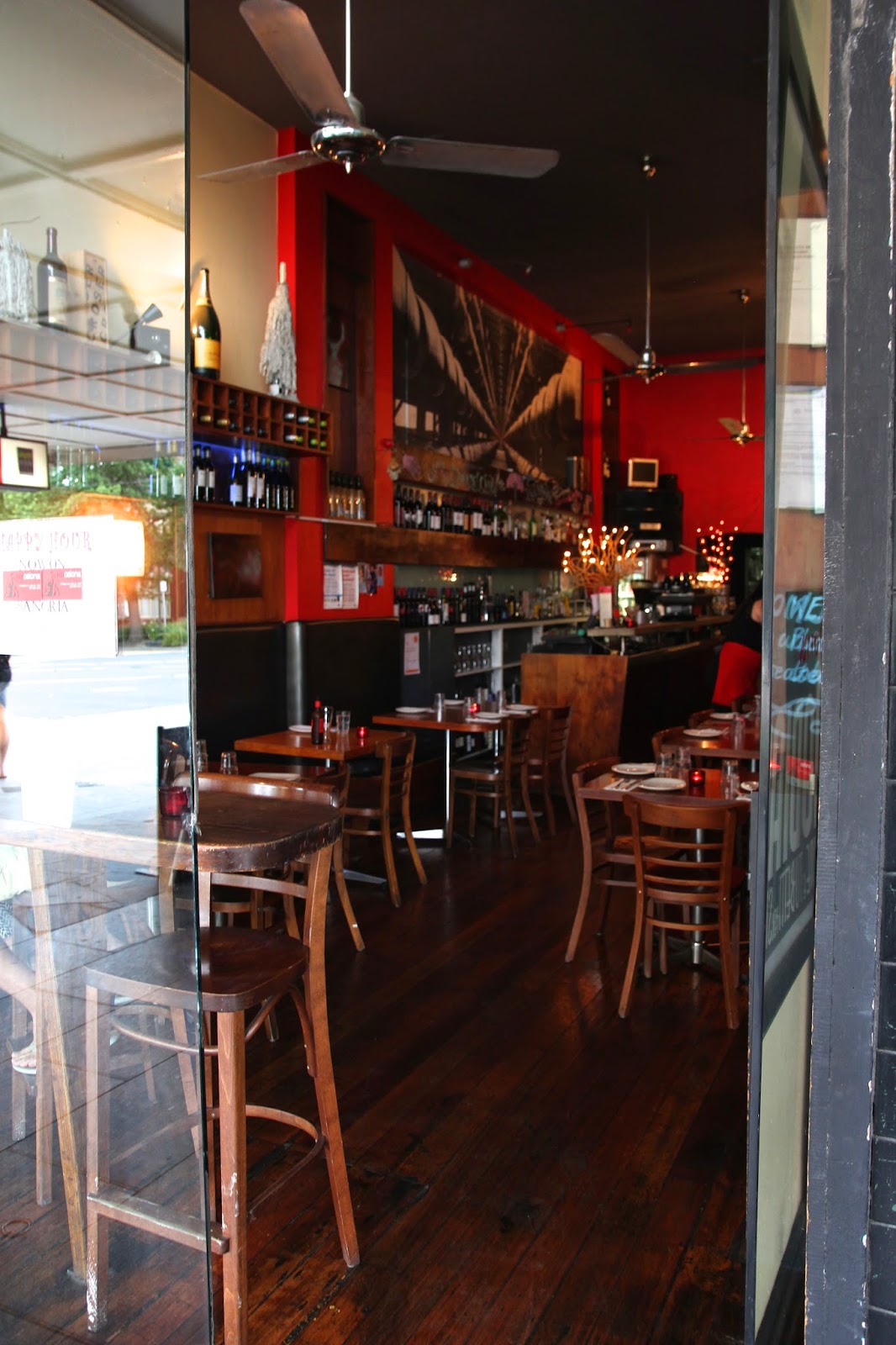 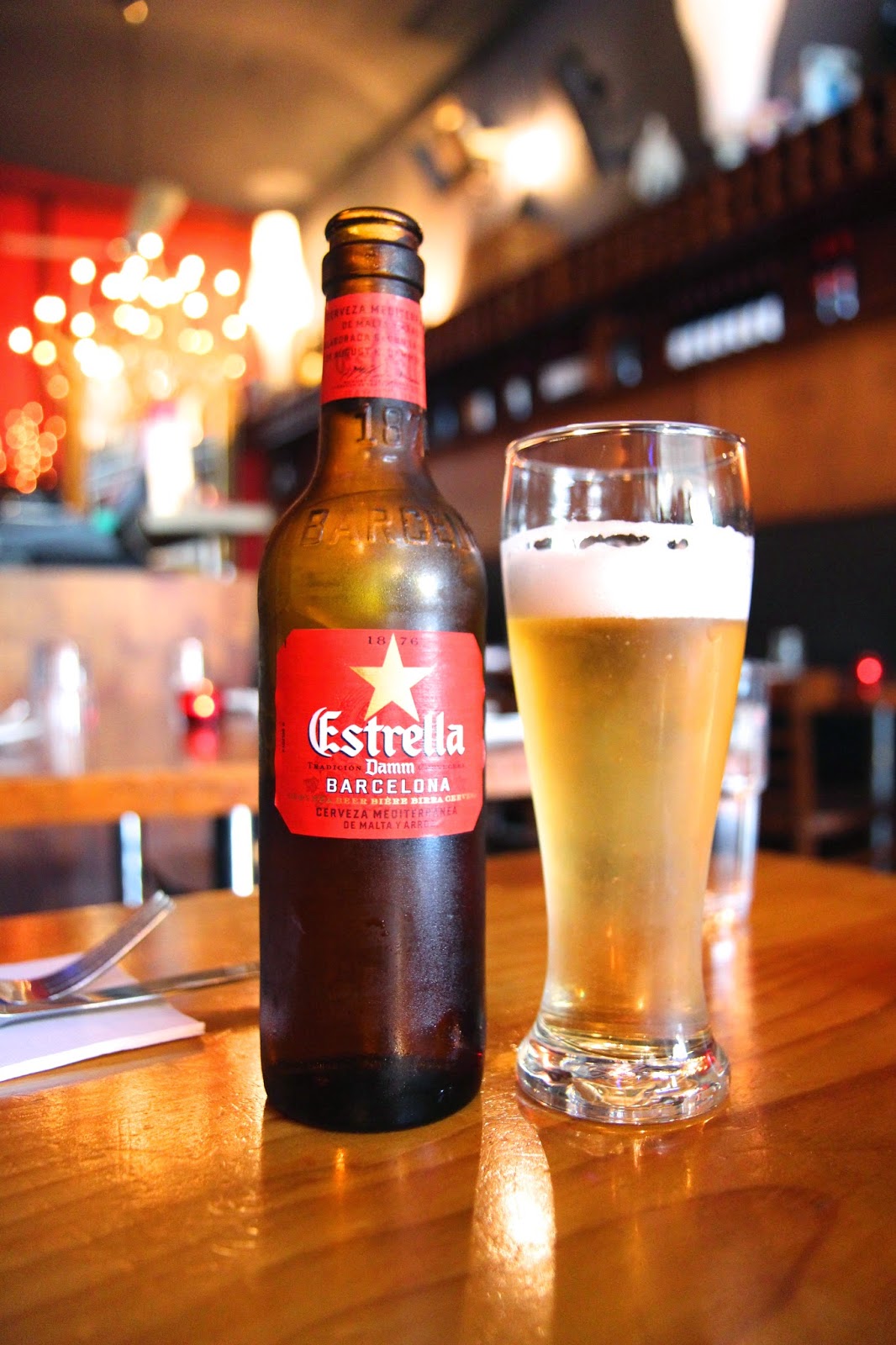 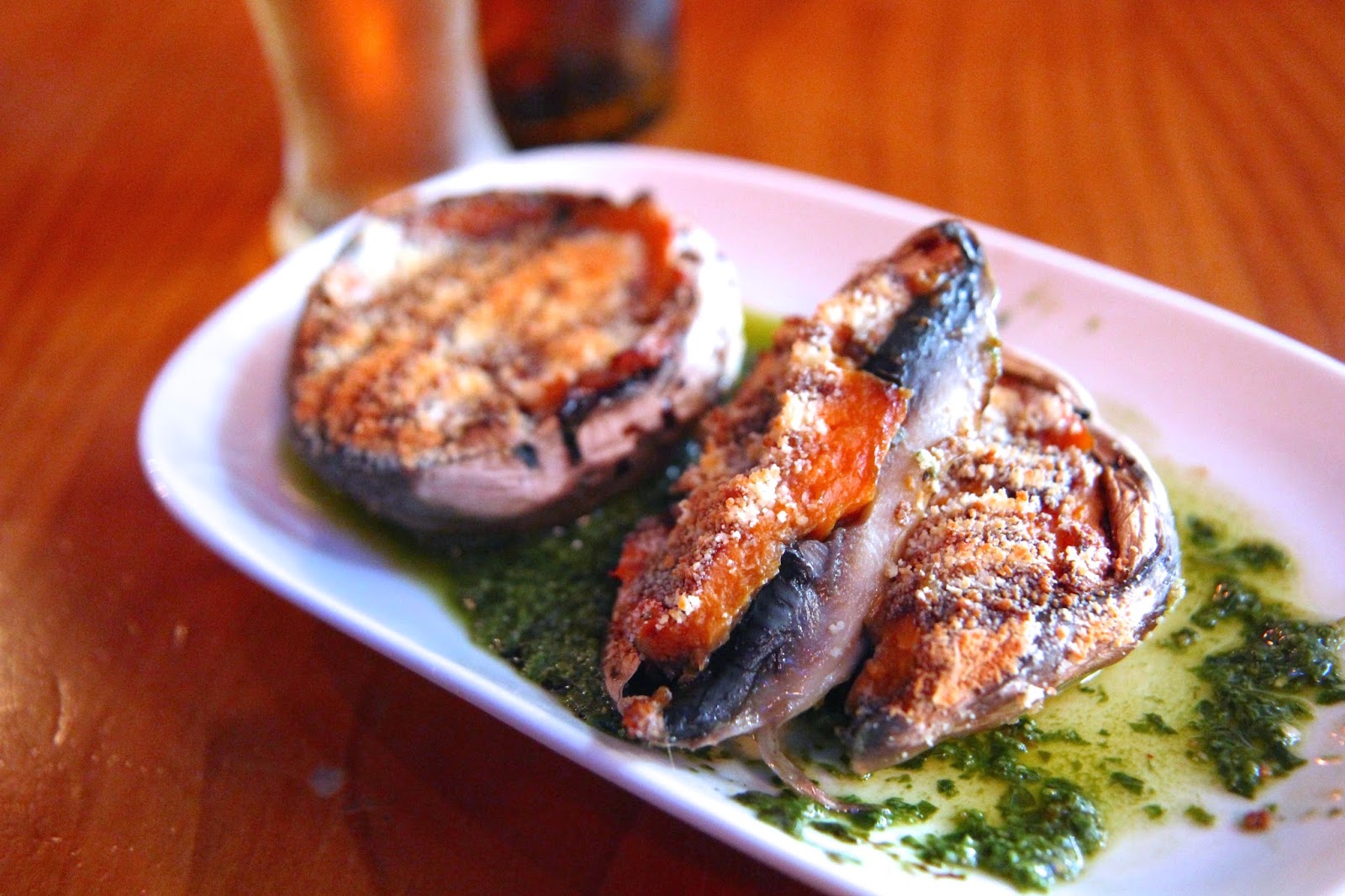 Stuffed Portobello (3.0)--filling comprised a mash of carrot and squash, topped with parmesan and bread crumbs, baked, served in a sauce of parsley and olive oil; an auspicious beginning. 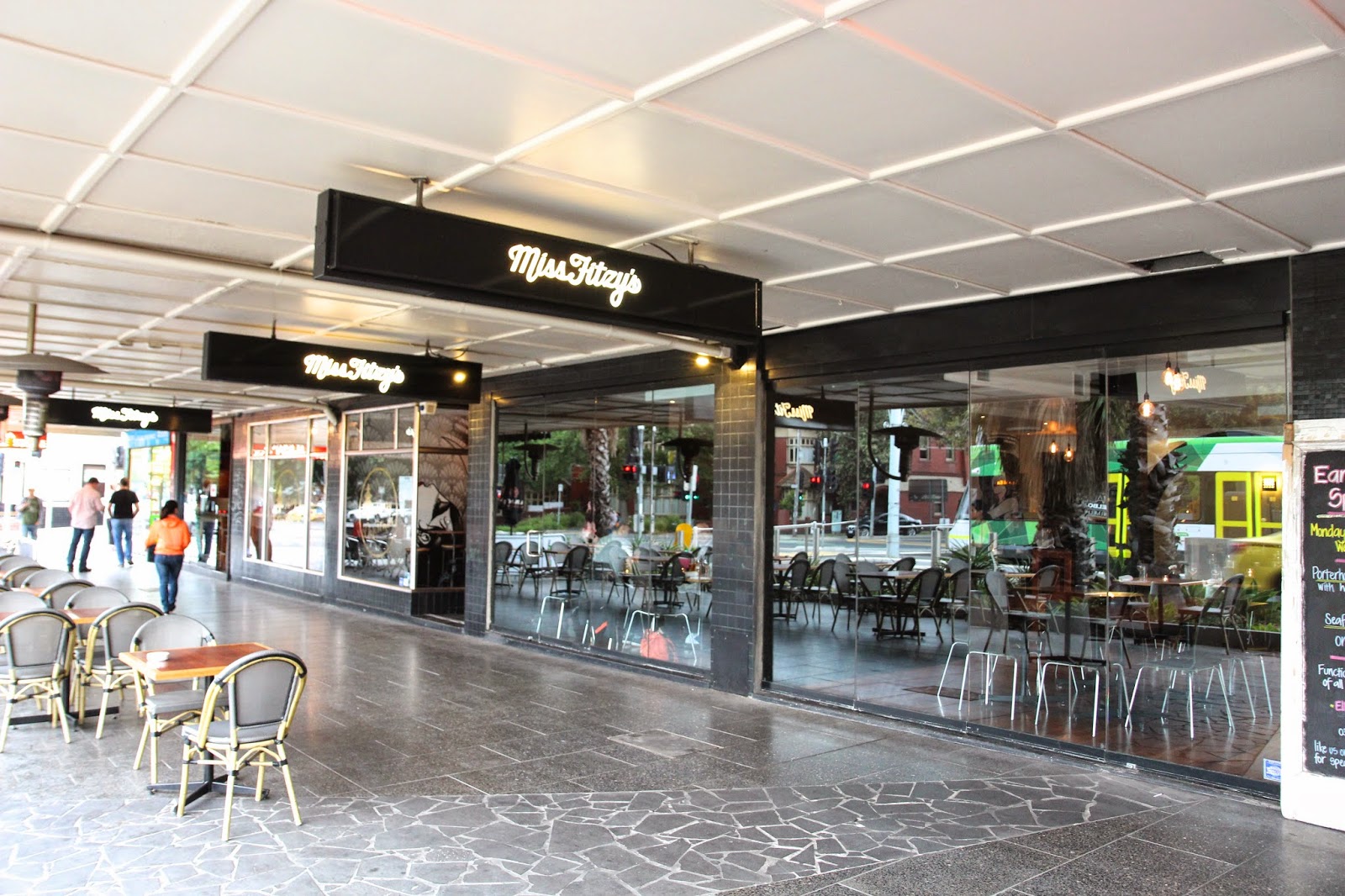 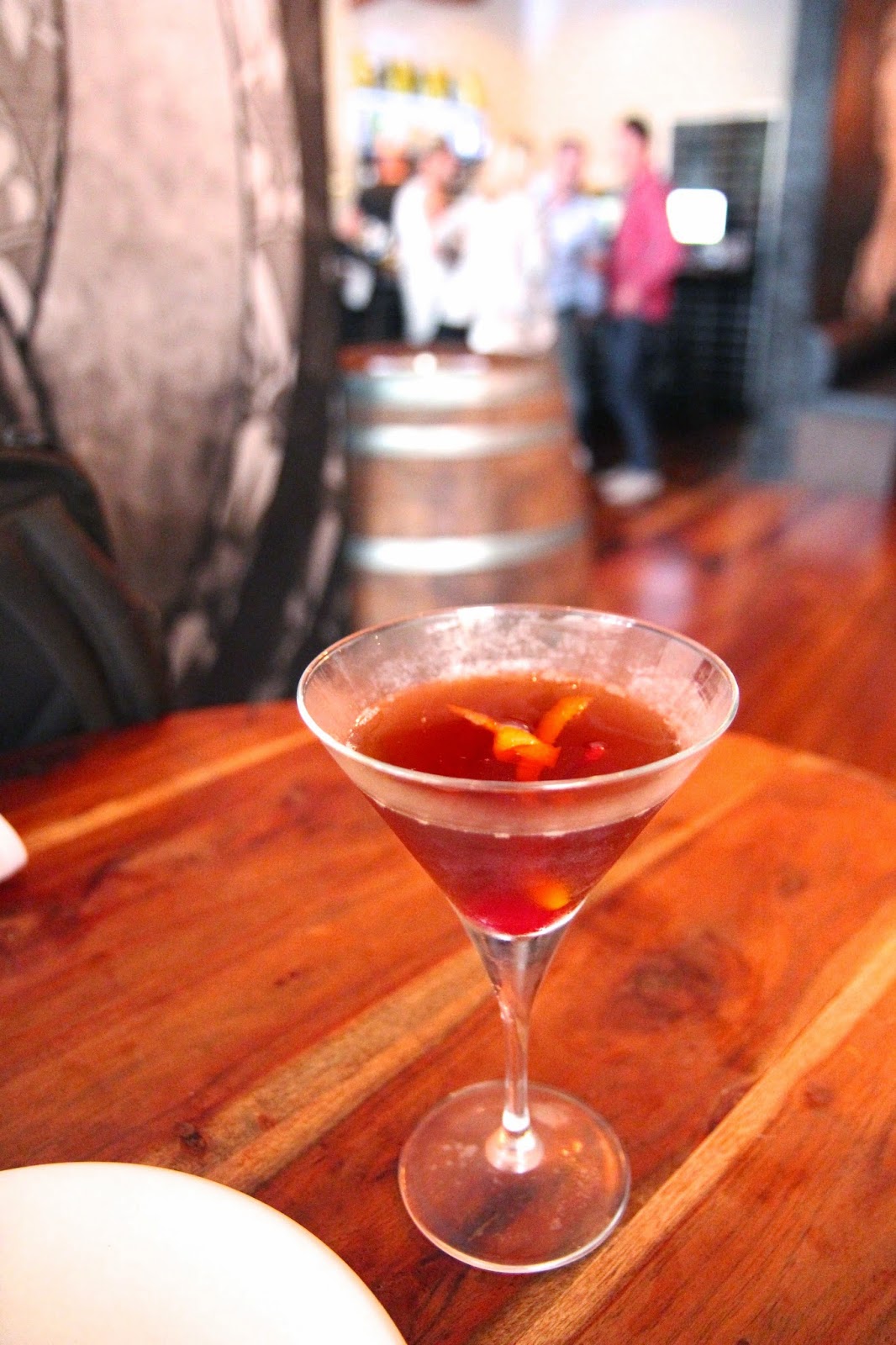 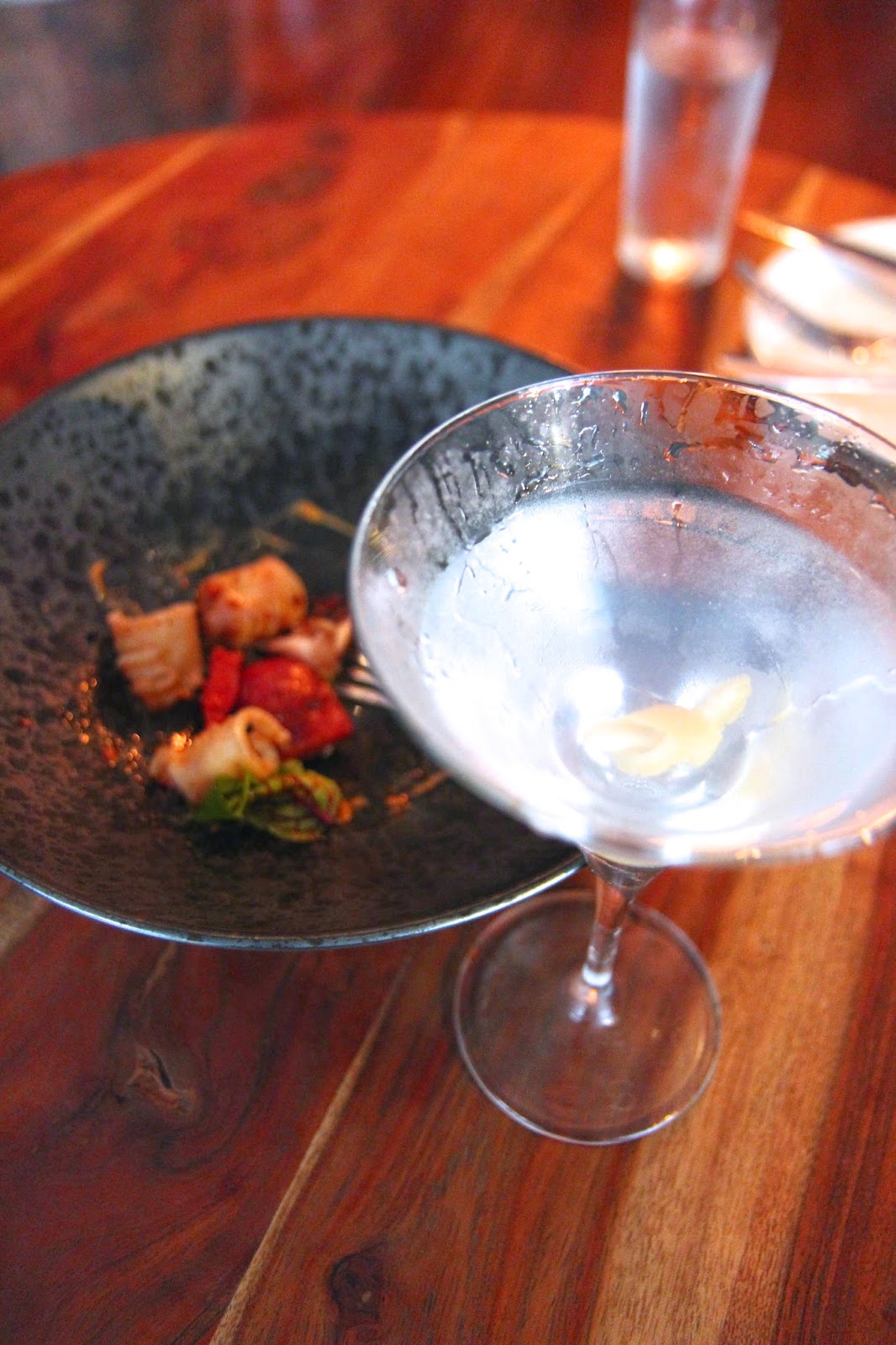 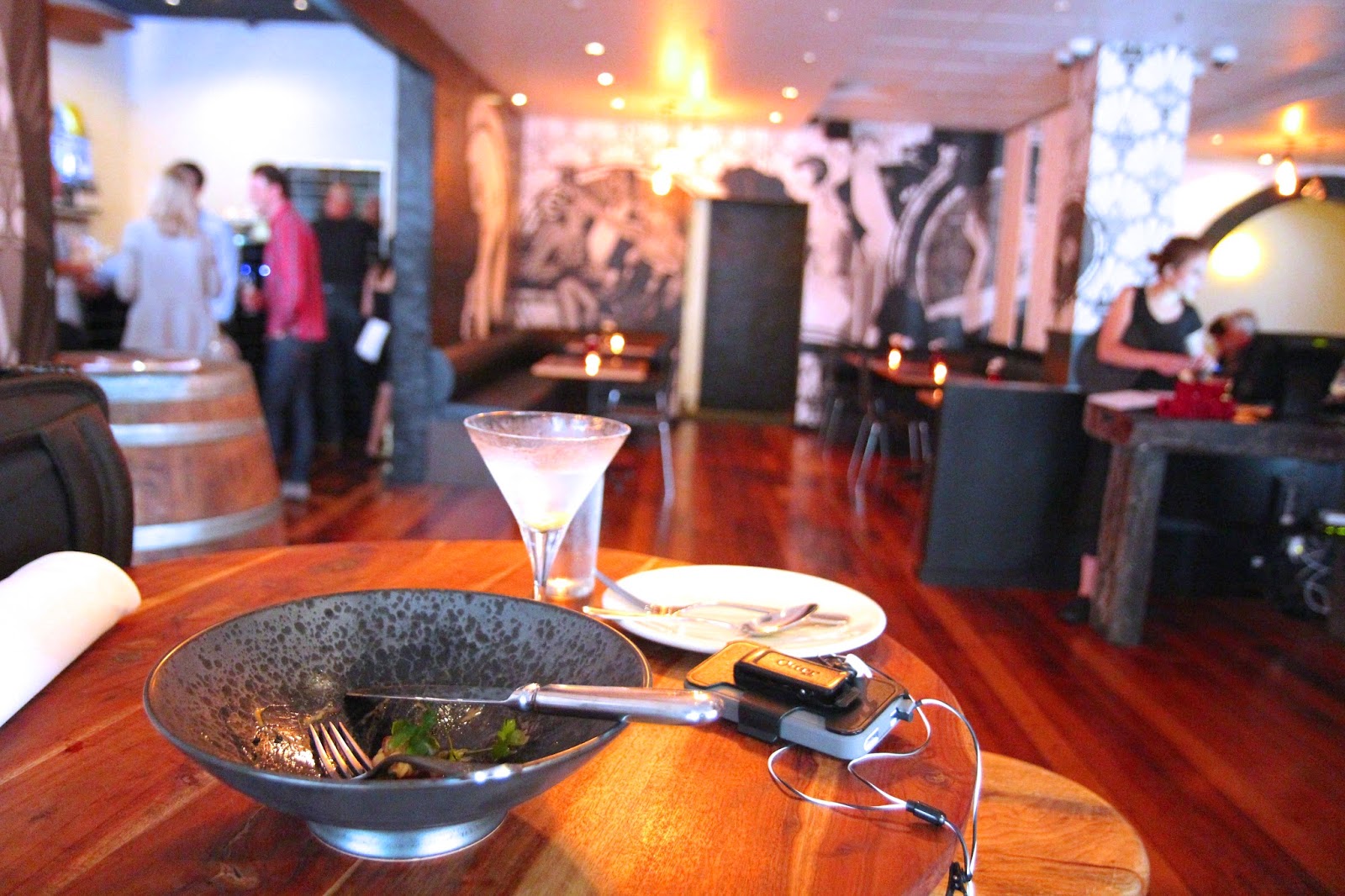 The highlight of the evening was Miss Fitzy's.  On the confident recommendation of the manager, I ordered the roasted squid, which came with caviar, chorizo, parsley, onion.  The squid was cooked to perfection.  Flavors well-balanced, from the brininess of the caviar and smokiness of the chorizo, plus a slight kick from spices.  If not for TERSK, I would've stayed to try more dishes. 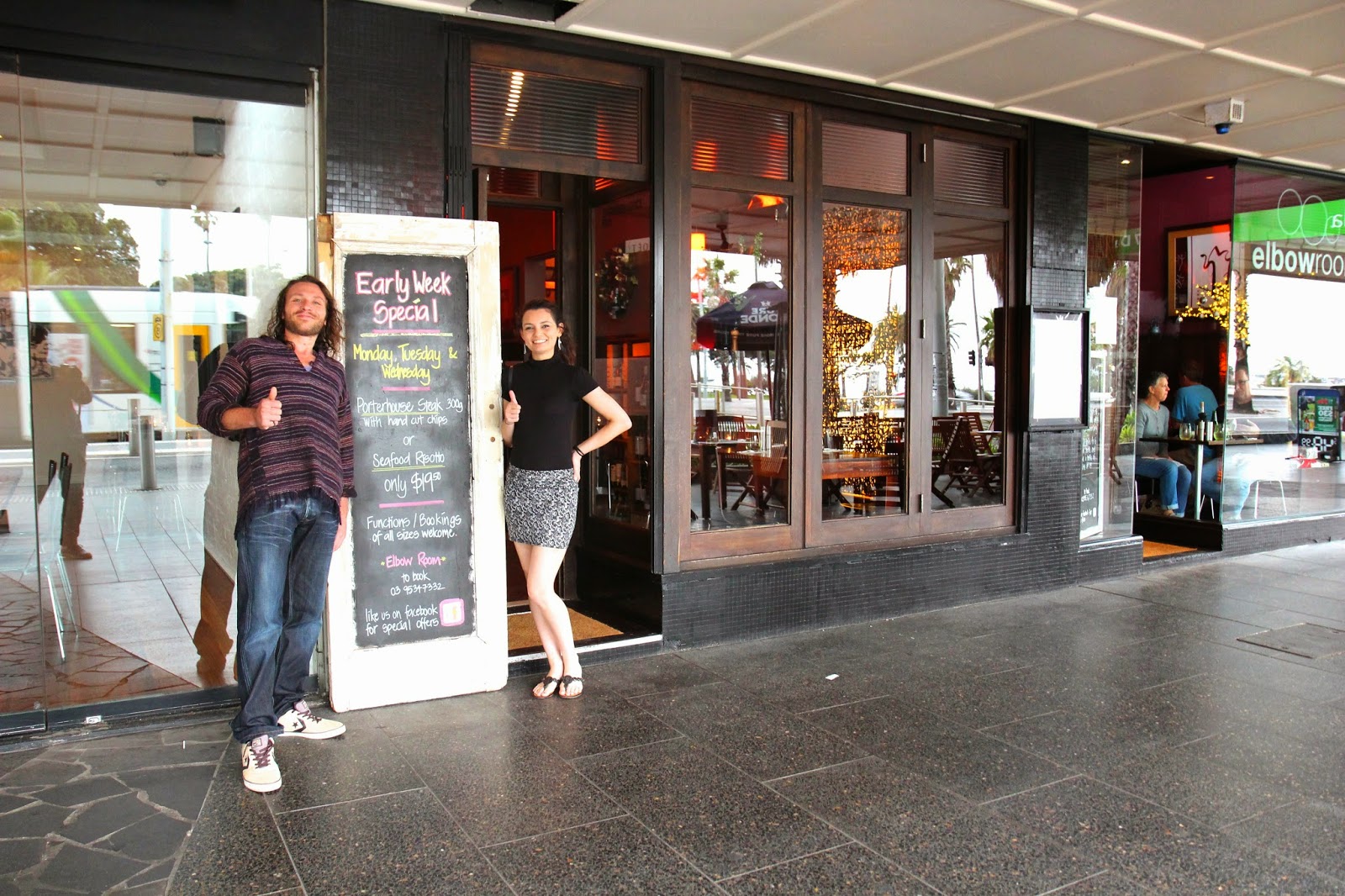 As I'm lining up the shot, a dude walking from one end of the street (left of frame) and a chick walking from the other end (right of frame), totally unrelated as far as I could tell, converge on the spot at the exact same moment; without any hesitation, as if rehearsed, they simultaneously strike a pose, thumbs up, and smile for the camera--CLICK--then, again without any hesitation, they high-five each other and resume walking down the street in opposite directions--the entire episode lasting about 4 seconds, it was the weirdest, funniest, funnest, most random thing that has ever happened to me. 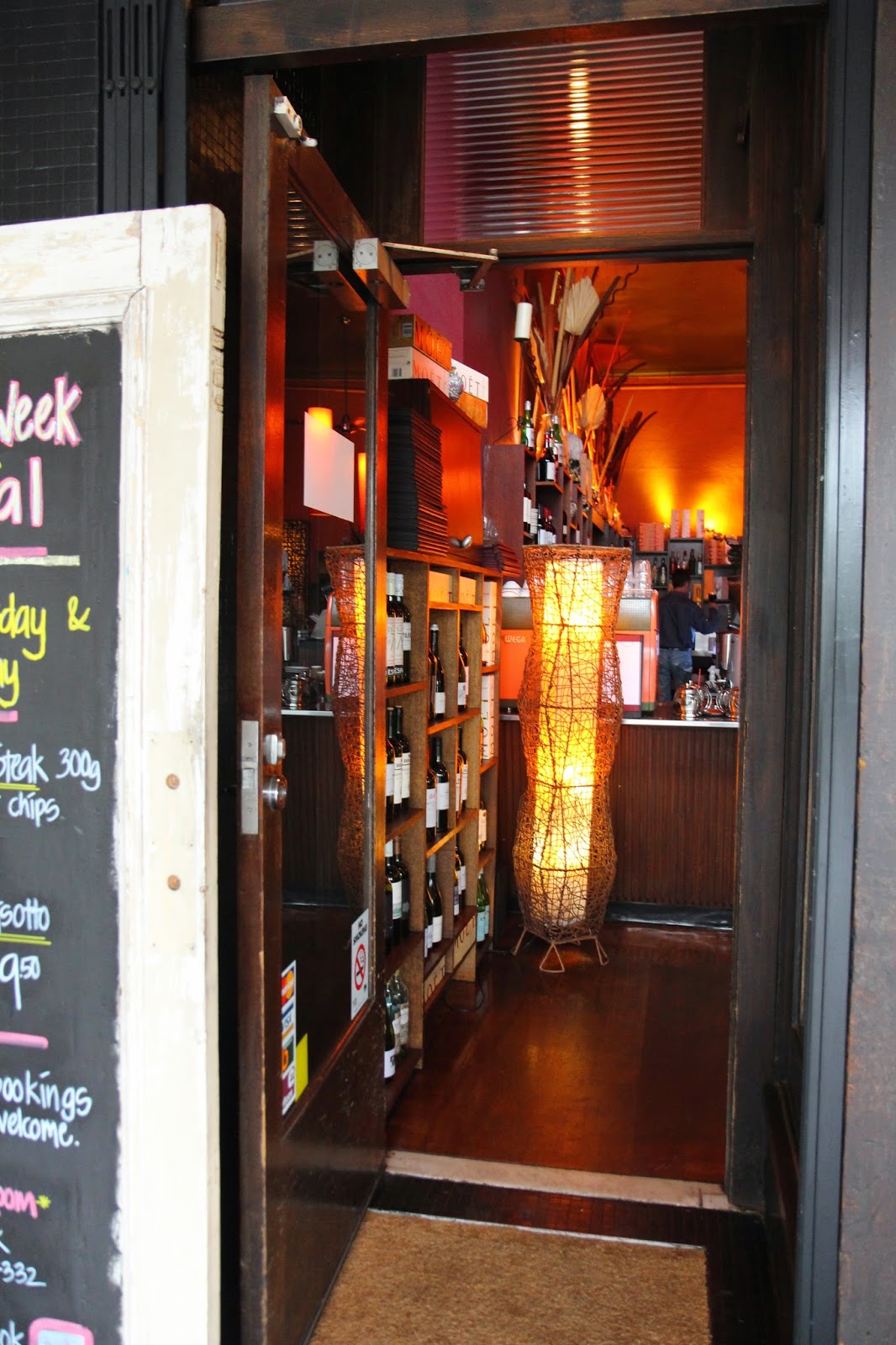 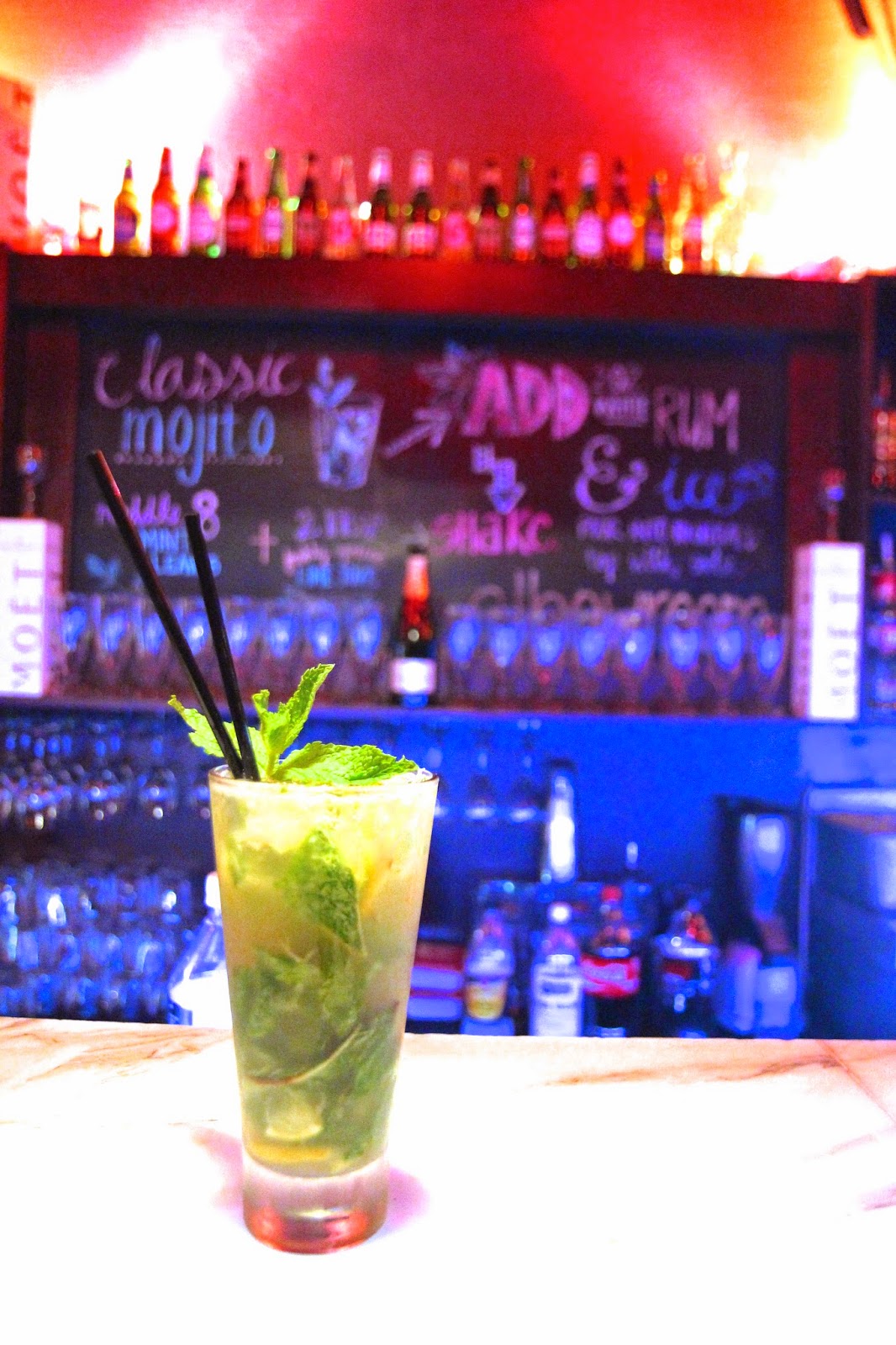 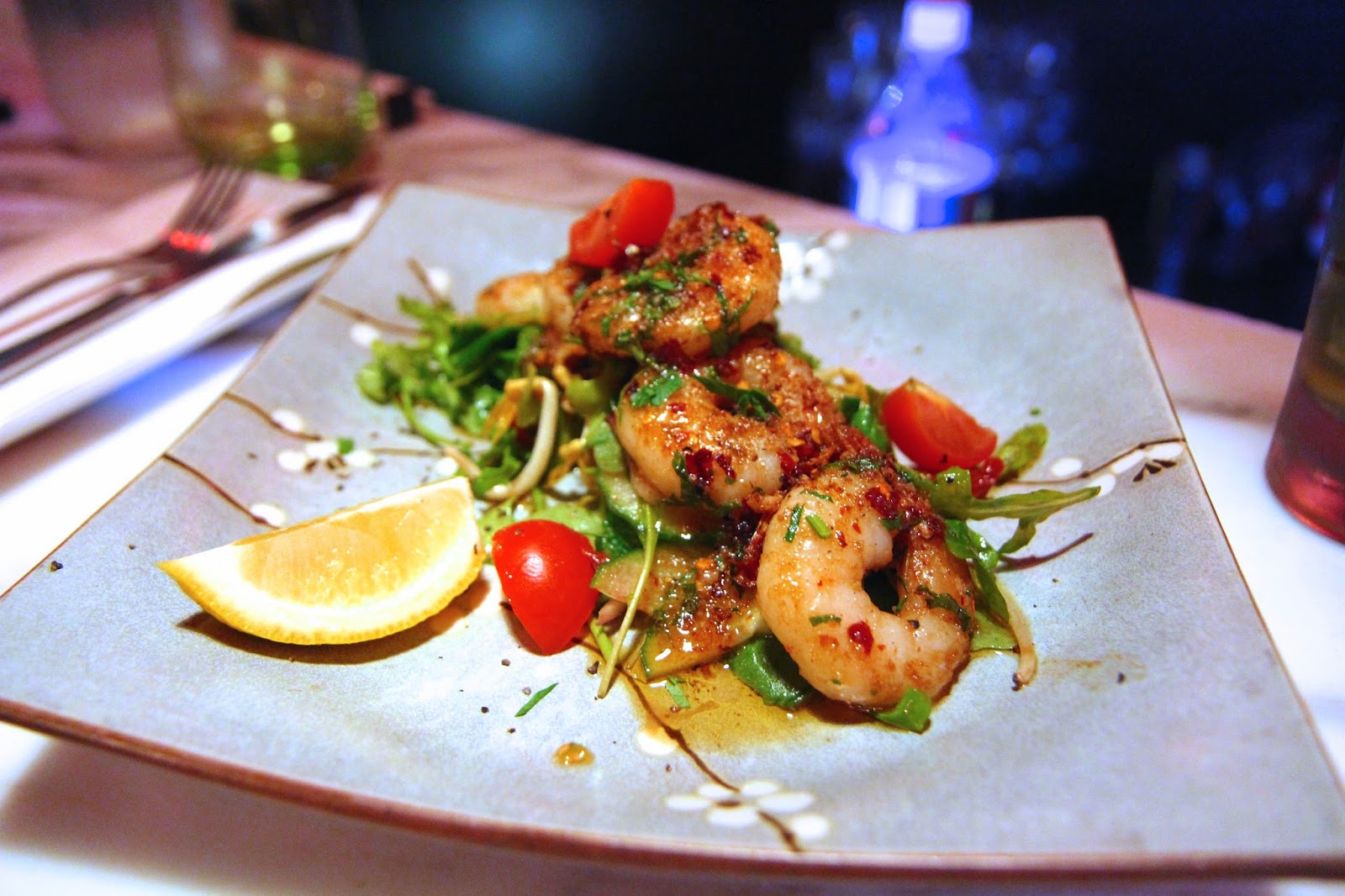 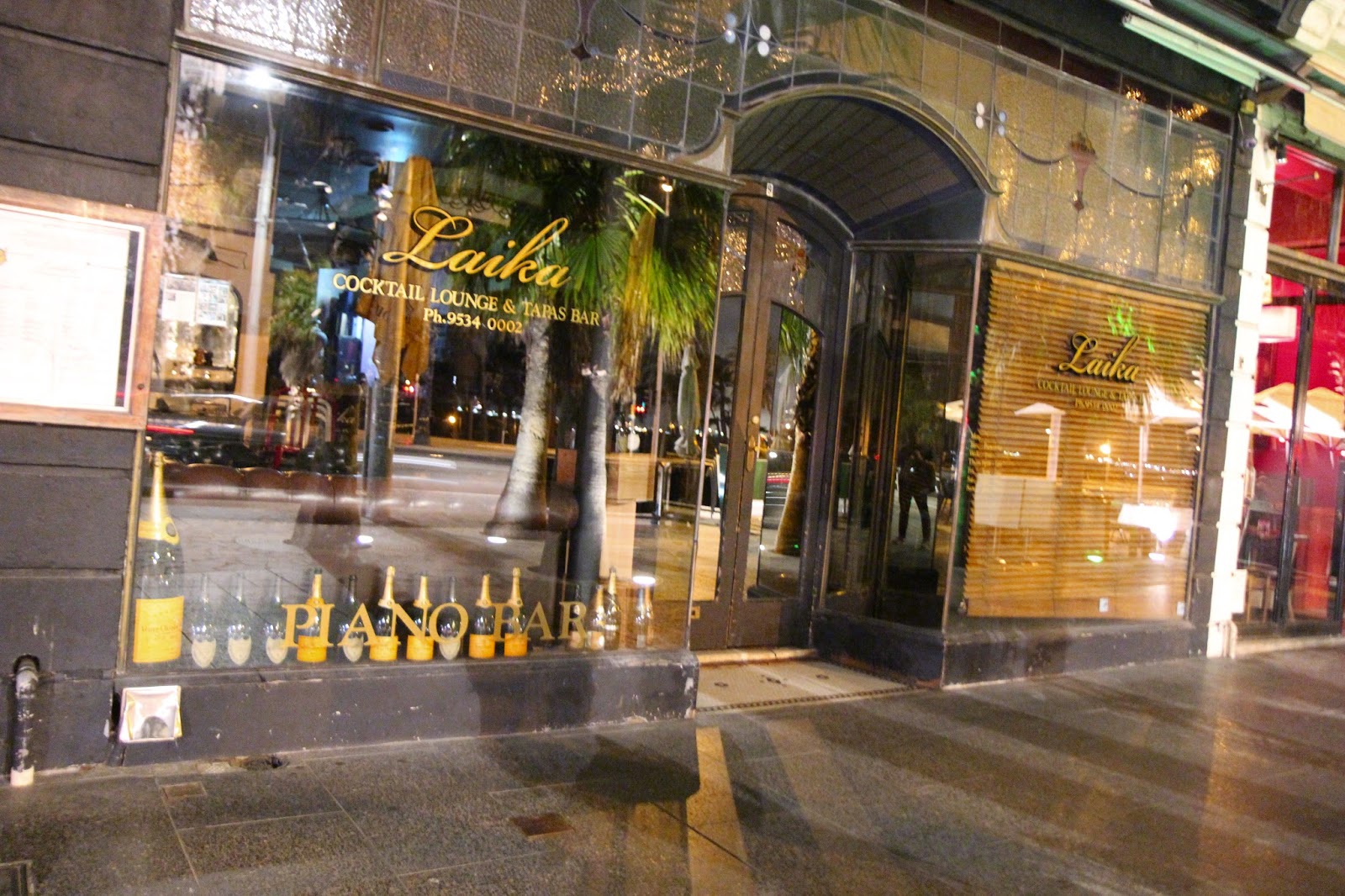 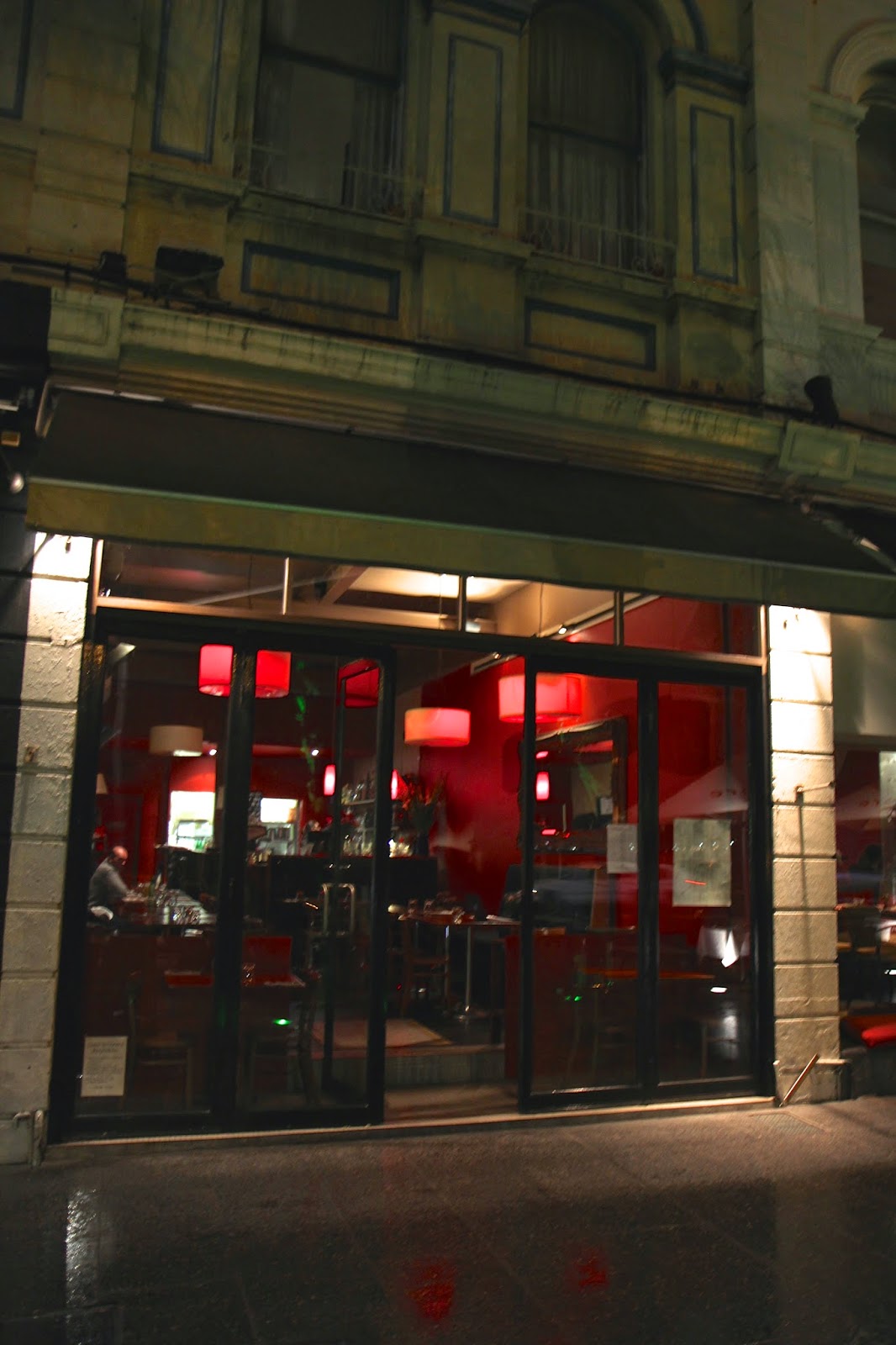 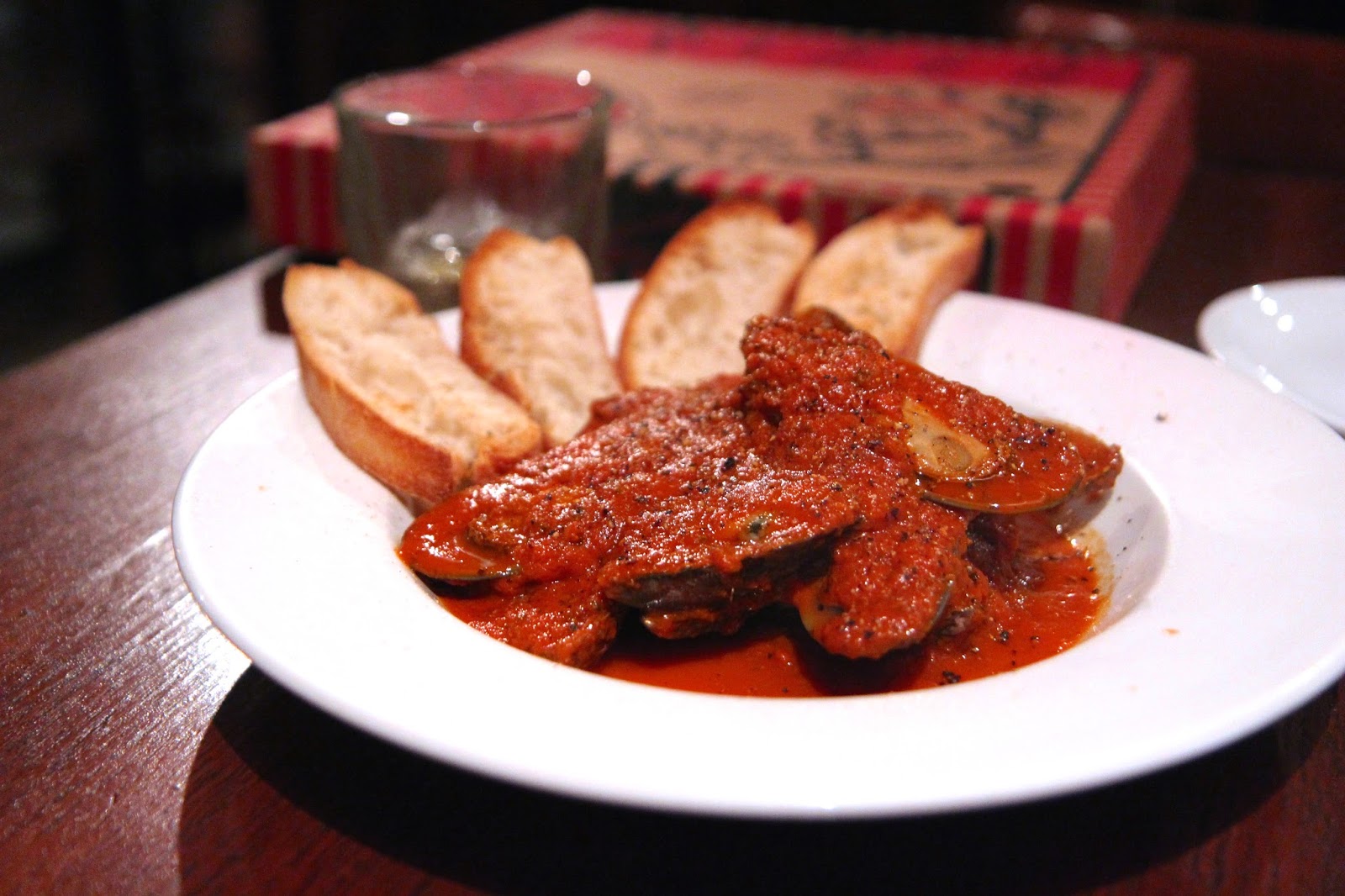 Mussels in Tomato Sauce (1.0)--clearly, the mussels had been frozen; the sauce was probably from a jar; the worst, and only truly terrible, dish of the project; getting full by this point, I was somewhat grateful that Rule 2.0 required me to stop after the initial nibble; in the background, Jim Beam on the rocks, nothing else worth drinking; also notice the pizza box, as explained below. 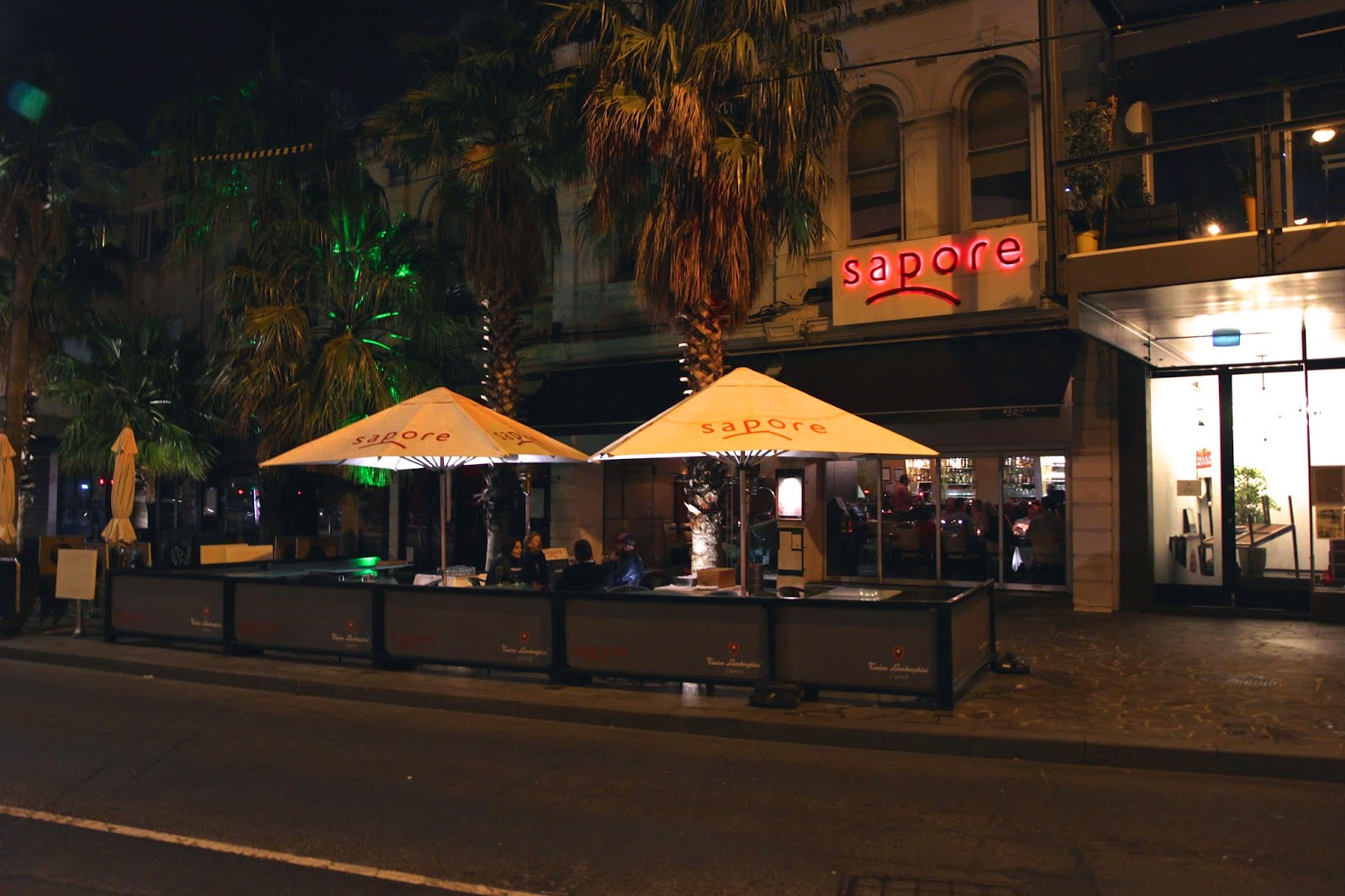 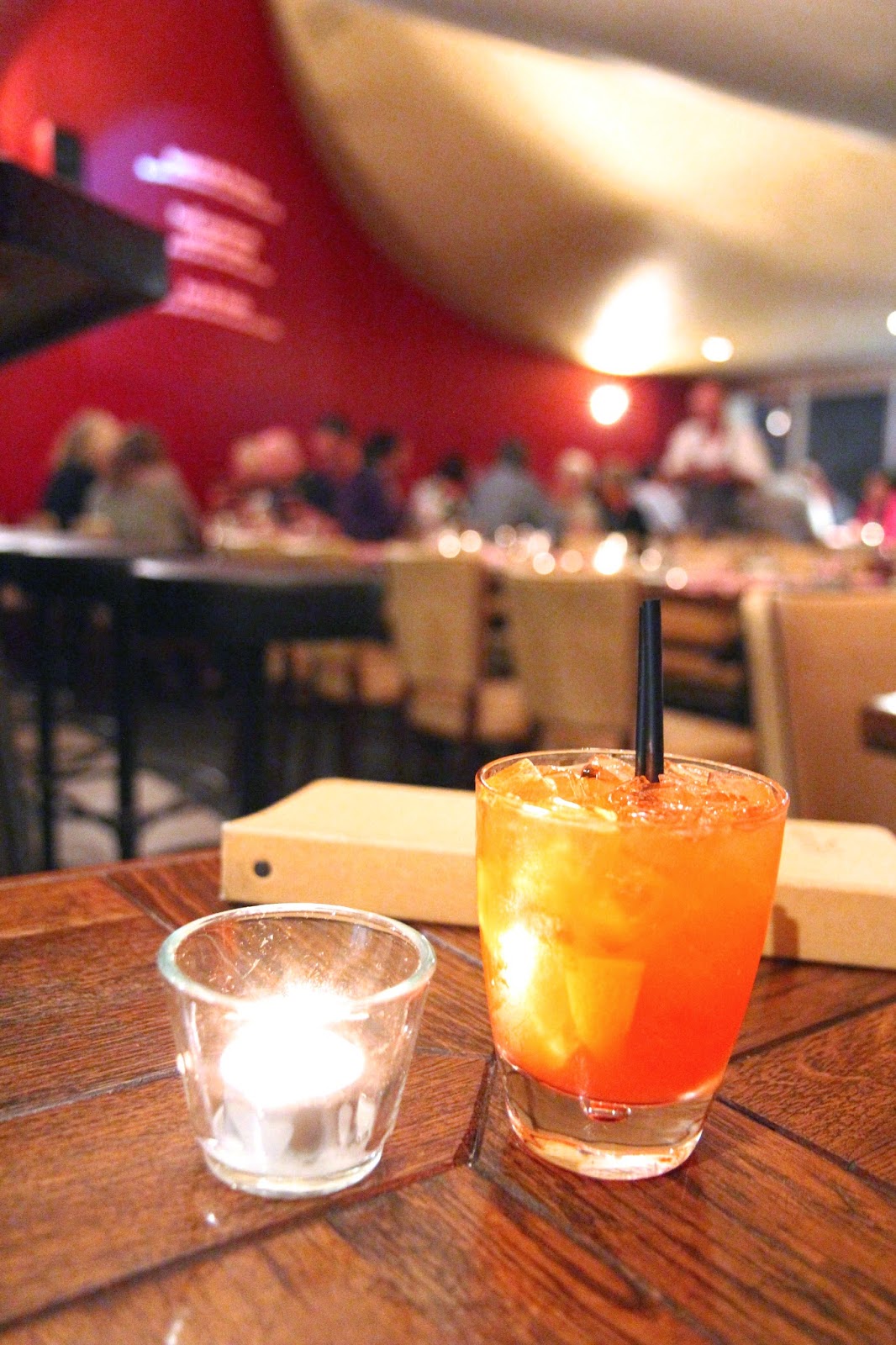 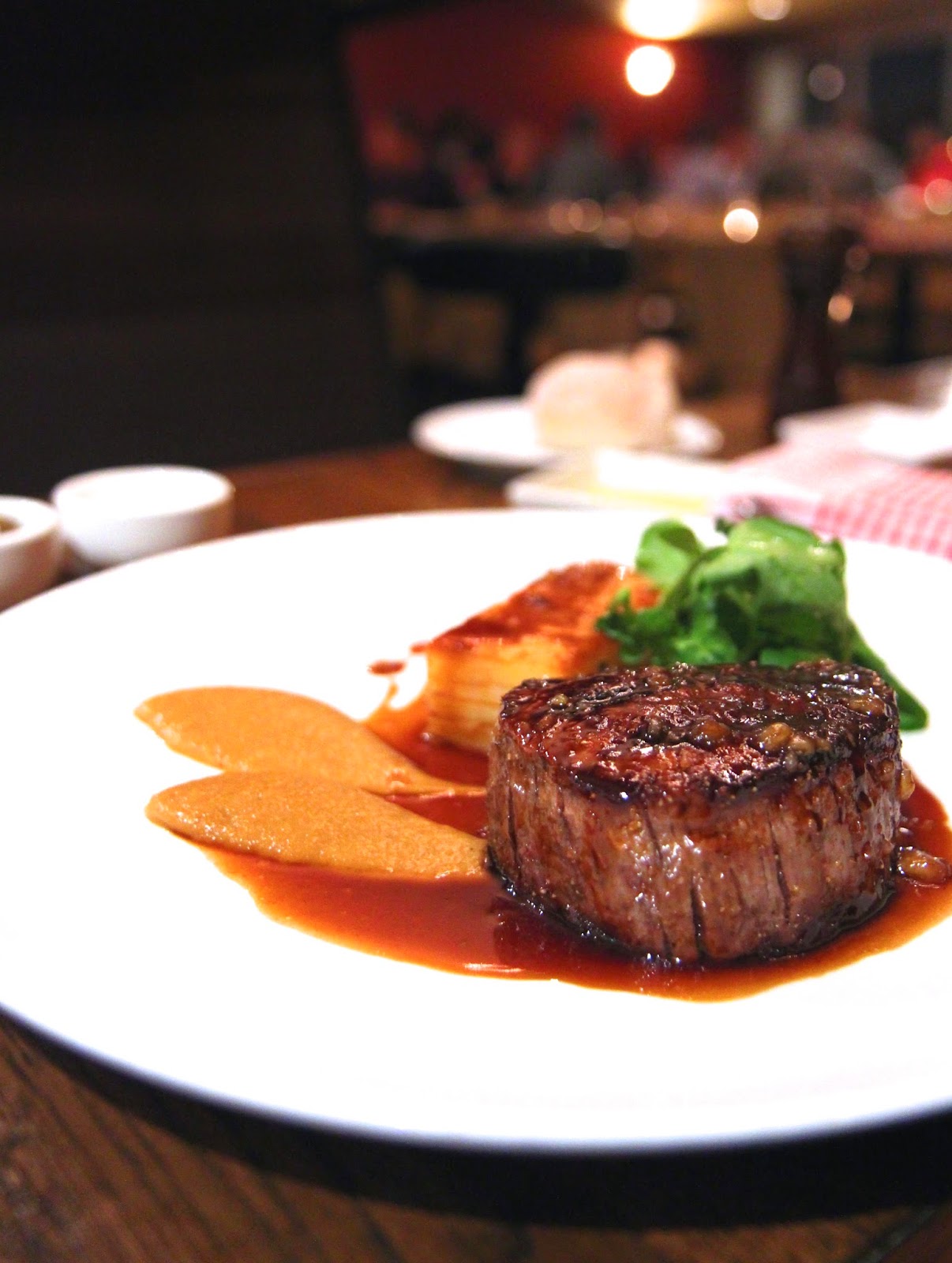 *The term "eye fillet" in Australia and New Zealand refers to what Americans would call "tenderloin."  From its ubiquitous presence on menus, it would appear to be an extremely popular cut for beef steak. 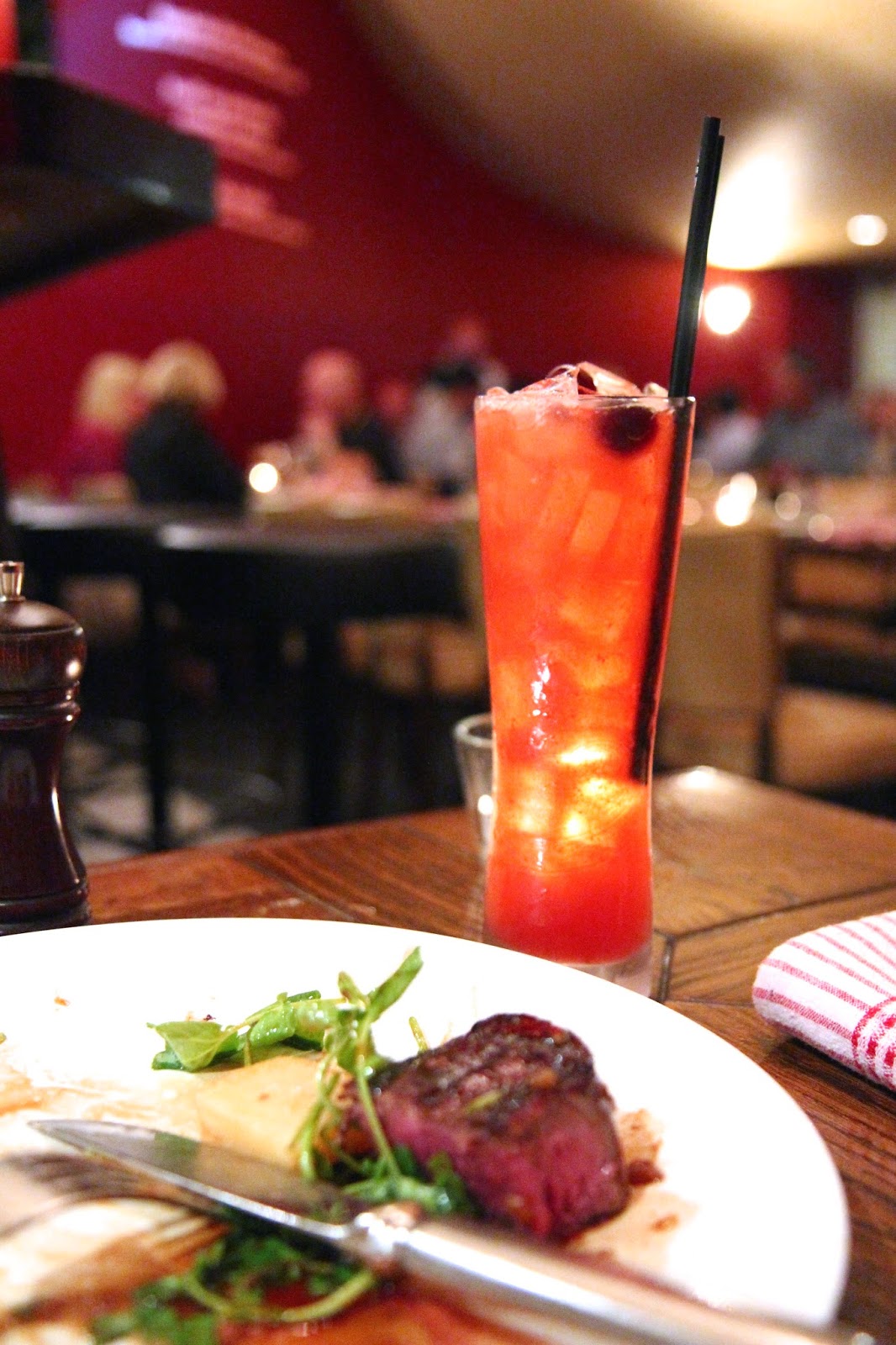 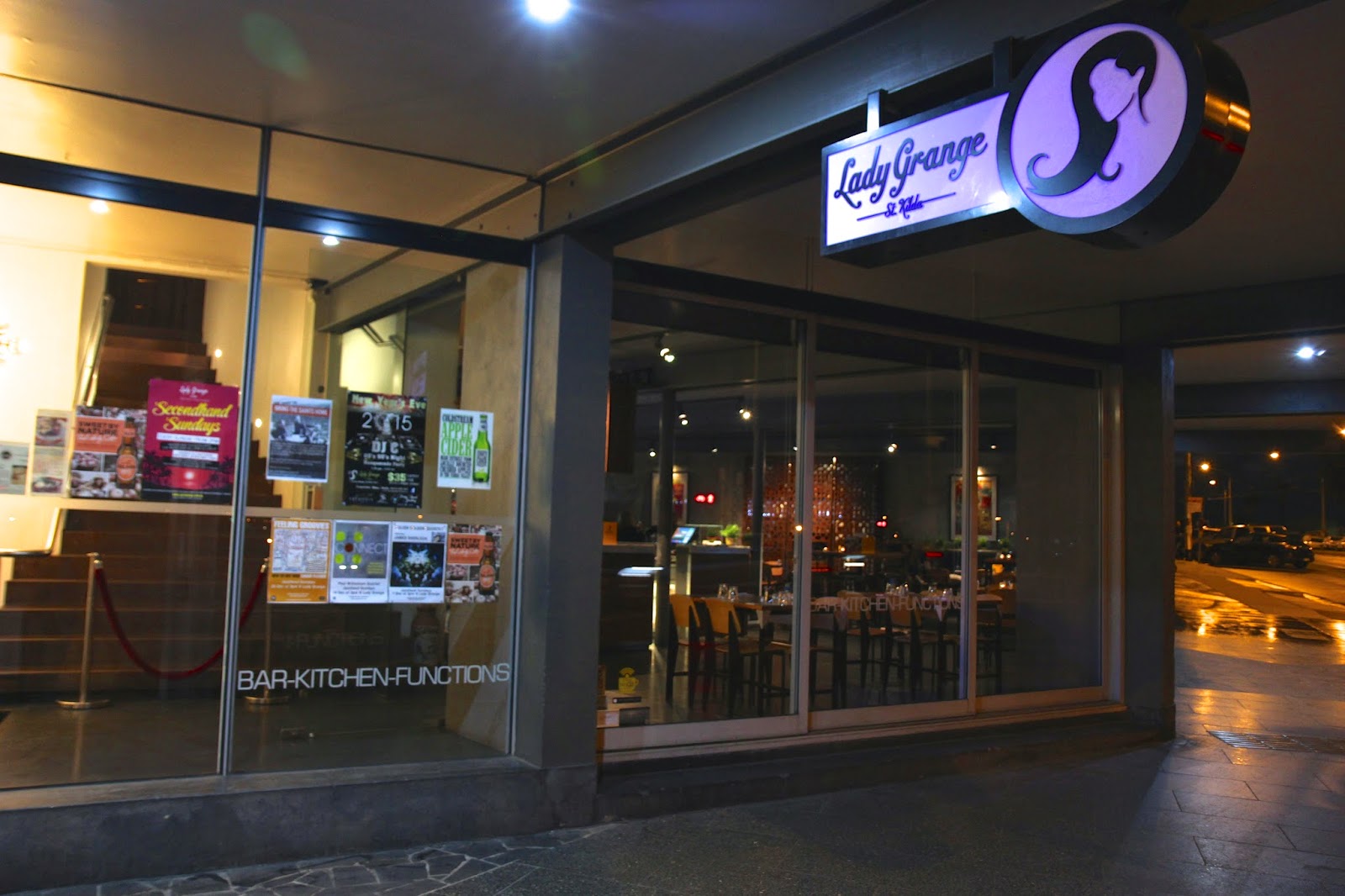 As Lady Grange was closing up early for the evening, I ordered a pizza for takeout.  Wanting to maintain the order of TERSK, I carried the pizza box from Bar Santo to Sapore and then back to my hotel room, where I had a slice to complete the project. 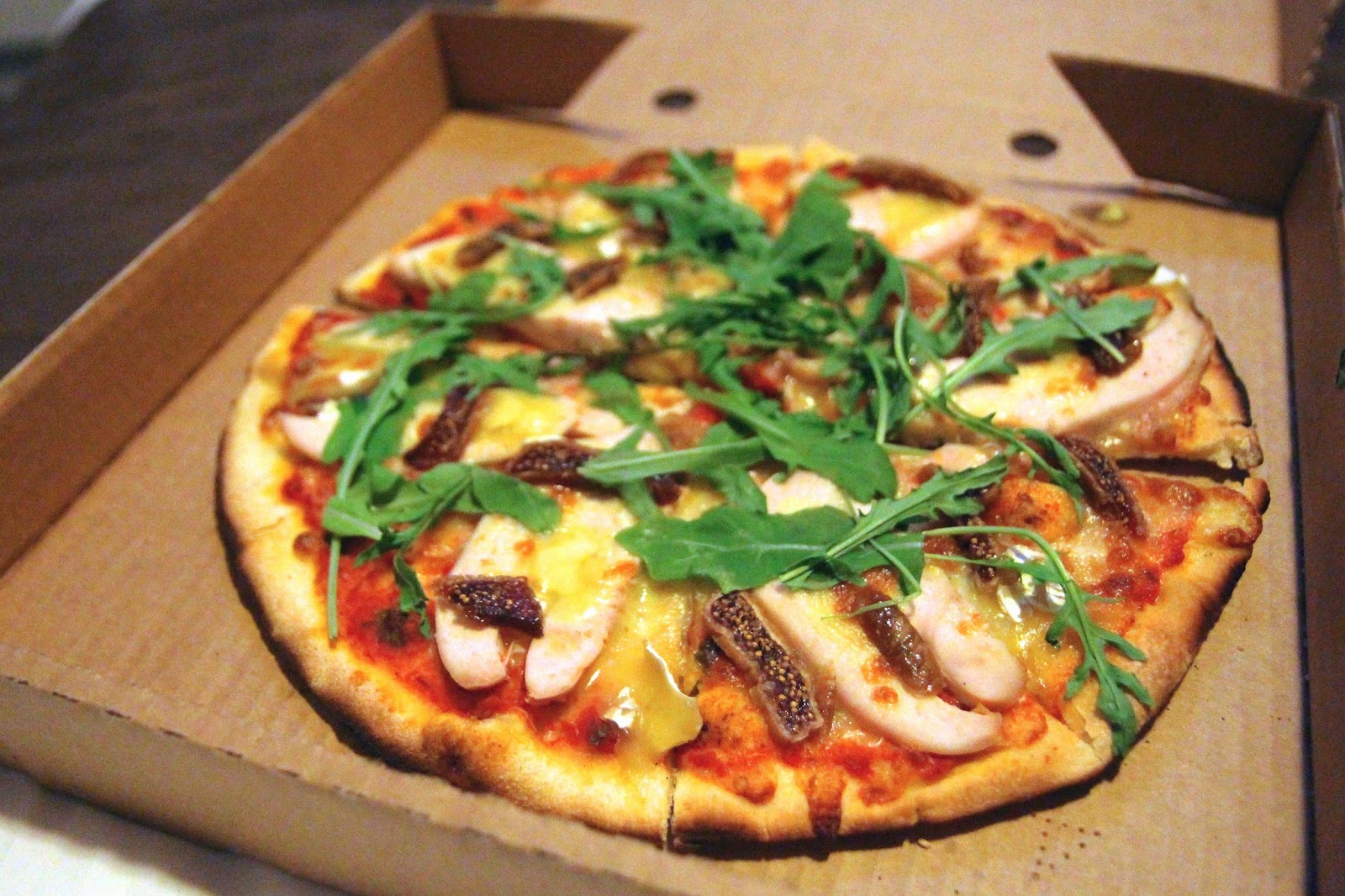 St Kilda Beach Pizza (3.25)--free range chicken, brie, fig, rocket; ordinarily, I would never order pizza with fruit as a topping, but I liked the idea of ending TERSK with an item named for St Kilda; to my utter surprise, and delight, the figs worked quite well.