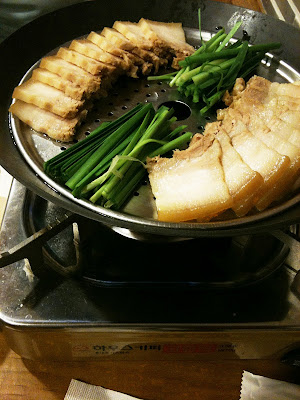 Bossam (보쌈) is a classic Korean pork dish.  It can be as simple as boiling a chunk of pork, slicing the into thin pieces, then serving them with kimchi.  Pork belly is the most popular cut, but anything will do, preferably something with fat.  The meat may be steamed instead of boiled, sometimes even pan-fried just prior to serving to give it a slight crisp, as here.  Sauces may be involved, such as shrimp paste or soy sauce or chili paste.  Veggies for wrapping may be involved, such as parboiled cabbage or perilla leaves or sliced garlic.  At this restaurant near home, their twist is the addition of fresh garlic chives, which are presented, along with the meat, on a nifty steamer that keeps the meat warm but also wilts the chives after a couple minutes.  Both at home or out, it's one of the most common methods for eating pork where barbecue isn't involved (see for example 1.021 Jesa Spread).