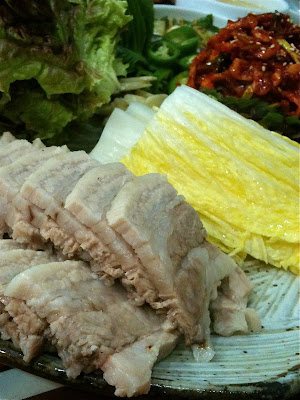 As if I'd been building up to it, I finally get around to my favorite restaurant for bossam (보쌈) on the 4th post concerning the dish (see most recently 1.229 Samhap).  What this place does best, better than any bossam joint that I've ever been to in my entire life, and I've been to plenty, is the spicy radish called "mumalaengi" (무말랭이) (see photo, top right) that's served as an accompaniment to the meat. The term more-or-less translates to "dried radish." Mu (무), a large white radish virtually identical to Japanese daikon, is cut into strips, salted and left to shed moisture until the strips achieve an almost leathery chewiness, and then partially reconstituted with various seasonings to create a kimchi-like side dish. While the spiciness pairs perfectly with the taste of the pork, the dense texture provides excellent contrast to the pork's softness. It's my favorite topping for bossam, the only one necessary. The mumalaengi here is so good that I've often asked for some to go, so that I could eat it on its own, without the pork, at home (this is actually against their policy, due to demand, but I've been a regular for nearly 20 years).

I would've taken a better photo of the radish, but I was completely wasted by the time the photo op presented itself. The entire afternoon had been dedicated to the wedding of one of my best friends, Hong Shik, a high school buddy. Part of the festivities involved a quasi-reception that I had organized for the newlyweds at the Banyan Tree Resort in their honeymoon suite, which the grooms' friends had chipped in to provide the couple as a wedding gift. Because the party was immediately to follow the twelve-o'clock wedding, which included a buffet lunch, my primary focus had been on the booze--40 bottles of wine for about 25 people, you know, just in case--not really on the food. What I'd failed to consider was that I would not have time to eat lunch, as I had to get to the hotel early to check in and set up. What I'd also failed to consider was that I hadn't had any significant amount of alcohol in over a month, which left my body both hungry for booze but not in any condition to have a lot of it. So, 5 hours later, after the party had dispersed to pursue individual dinner plans and leave the newlyweds in peace, I found myself at the bossam restaurant, too drunk to think about photographing the radish from a better angle. I'm surprised the photo is even in focus.